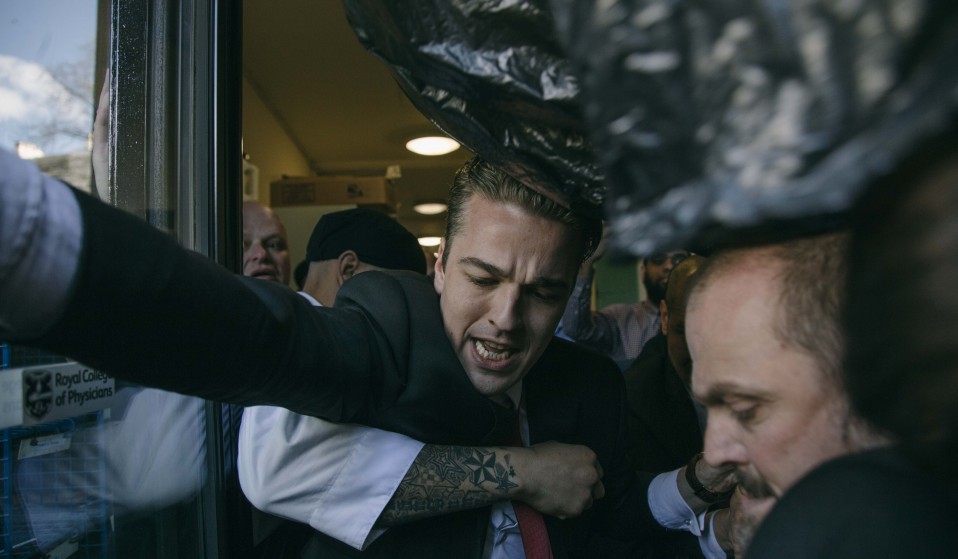 As junior doctors go on an unprecedented all-out strike, private healthcare companies meet in London to discuss how to suck cash out of the NHS.

As junior doctors go on an unprecedented all-out strike, private healthcare companies meet in London to discuss how to suck cash out of the National Health Service.

The British health service is pretty much in a state of crisis. Junior doctors are on an all-out strike, for the first time in the history of the National Health Service (NHS), as their battle for safe and fair contracts rages on. Meanwhile trainee nurses have been ramping up their efforts to ensure the bursaries they rely on to study aren’t cut, as current plans will see them forced to pay thousands of pounds to spend their nights working 12 hour shifts on hospital wards.

Fitting then that today the Royal College of Physicians, an organisation that represents medical professionals across the United Kingdom, held a meeting for CEOs from some of the biggest private healthcare corporations and investors at their swanky London offices to discuss “the private health care services industry internationally”.

As Jeremy Hunt, the British Minister for Health, wrote a book a few years ago calling for the abolition of a state-funded health system, instead calling for an insurance based service similar to that in the United States, you can see why alarm bells have started ringing. 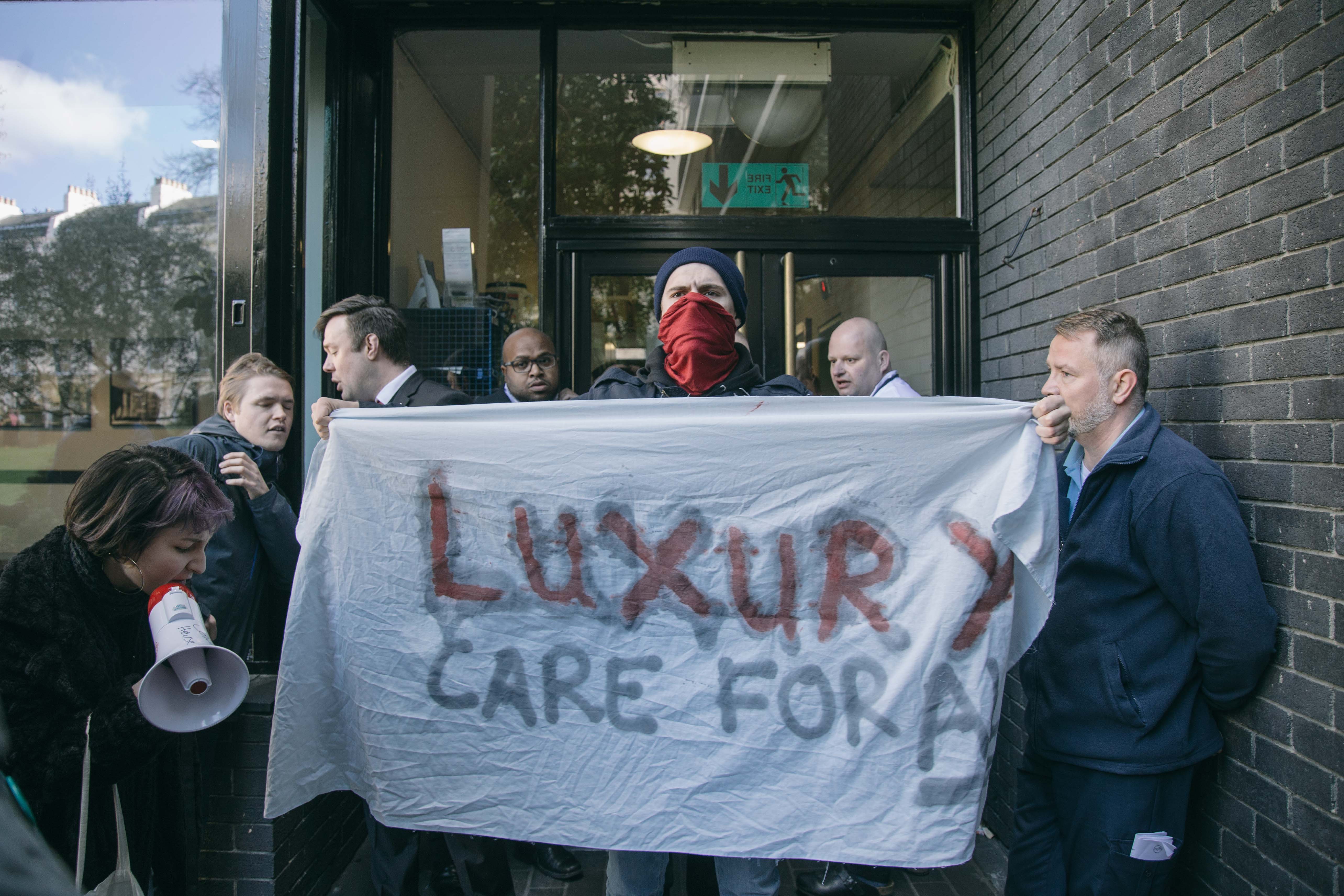 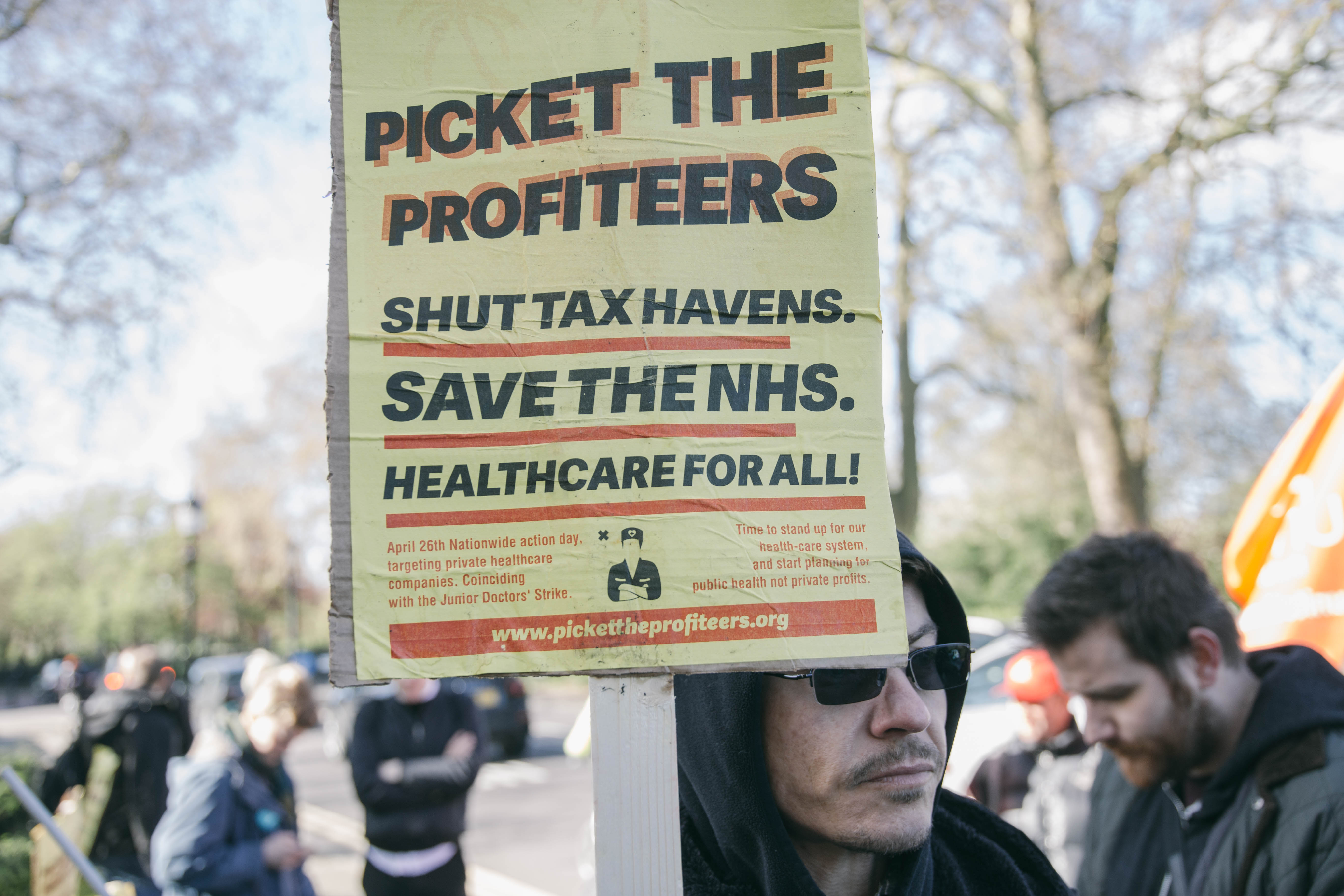 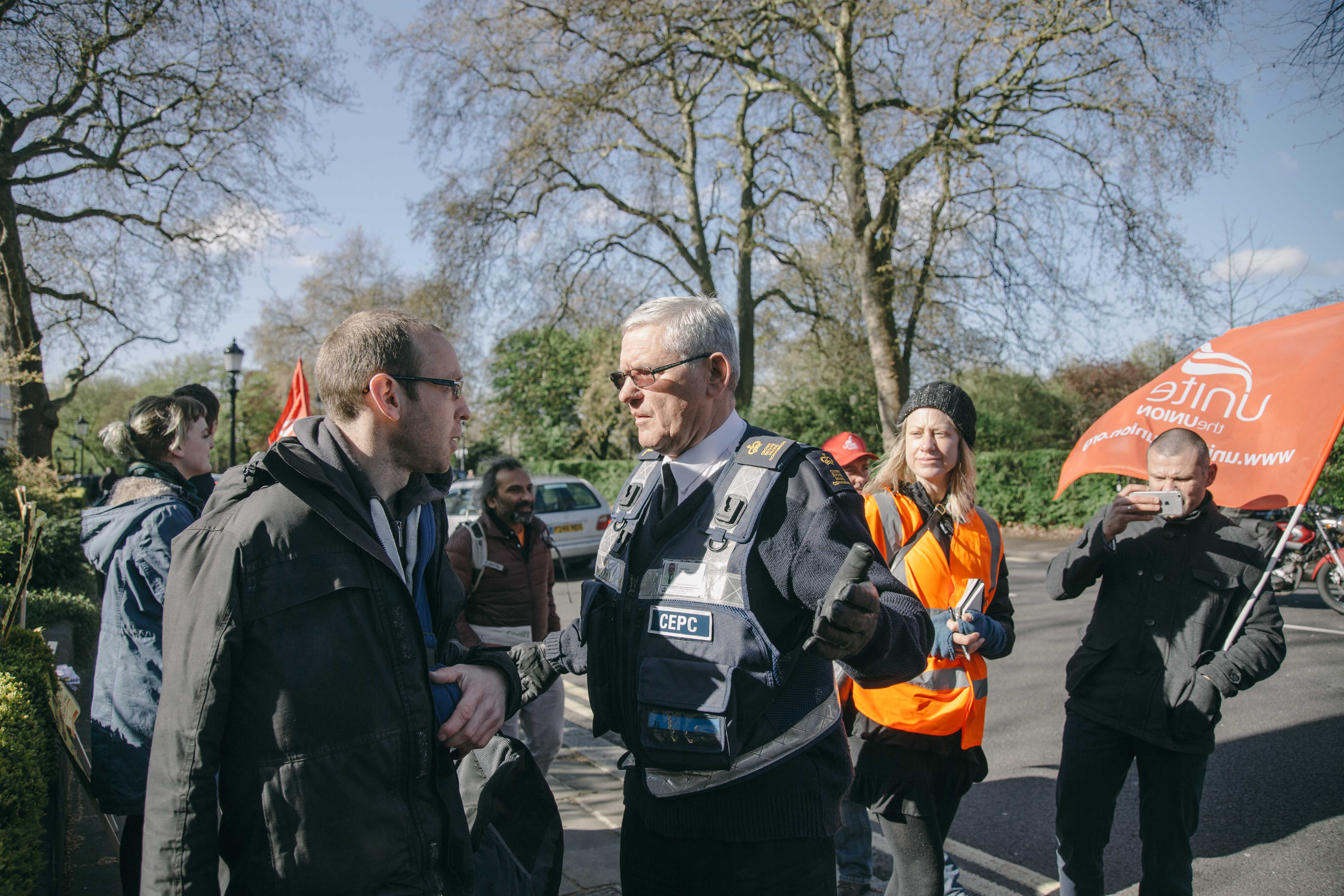 The website advertising this healthcare jamboree told participants they should expect to “pinpoint opportunities, understand how markets are changing and to explore new business models”, which can otherwise be read as “how can we make more cash from the British healthcare system guys?”.

Lined up outside the Regents Park offices bright and early were a crowd of campaigners, waving placards and angrily chanting while a stream of suits made their way into the building.

“It makes me feel a real sense of dread that the NHS is slipping out of our hands”, David Kirby explains, wearing his ‘I support the junior doctors’ t-shirt to make 100% certain he loved state-funded healthcare. “The other side, the people who want everything subservient to the accumulation of private wealth and for the sphere of social wealth to be as minimal as possible, are organised.” 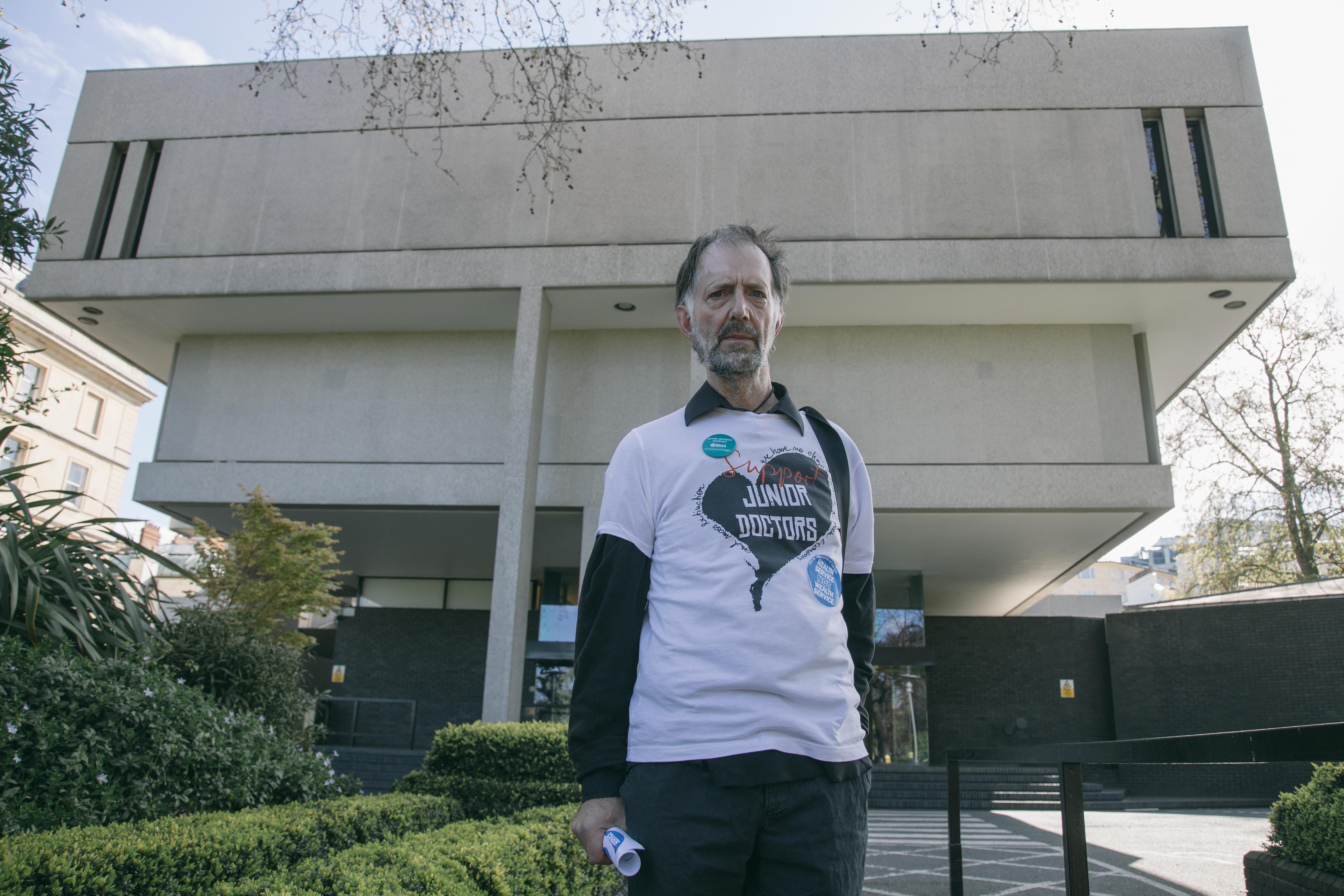 As David started shouting again, another small group of protestors arrived, these ones armed with bags of balloons and stink bombs. With the protest swelling, these guys decided enough was enough, and decided to try their luck and storm the building, attempting to shut the meeting inside down rather than just shouting from the pavement. 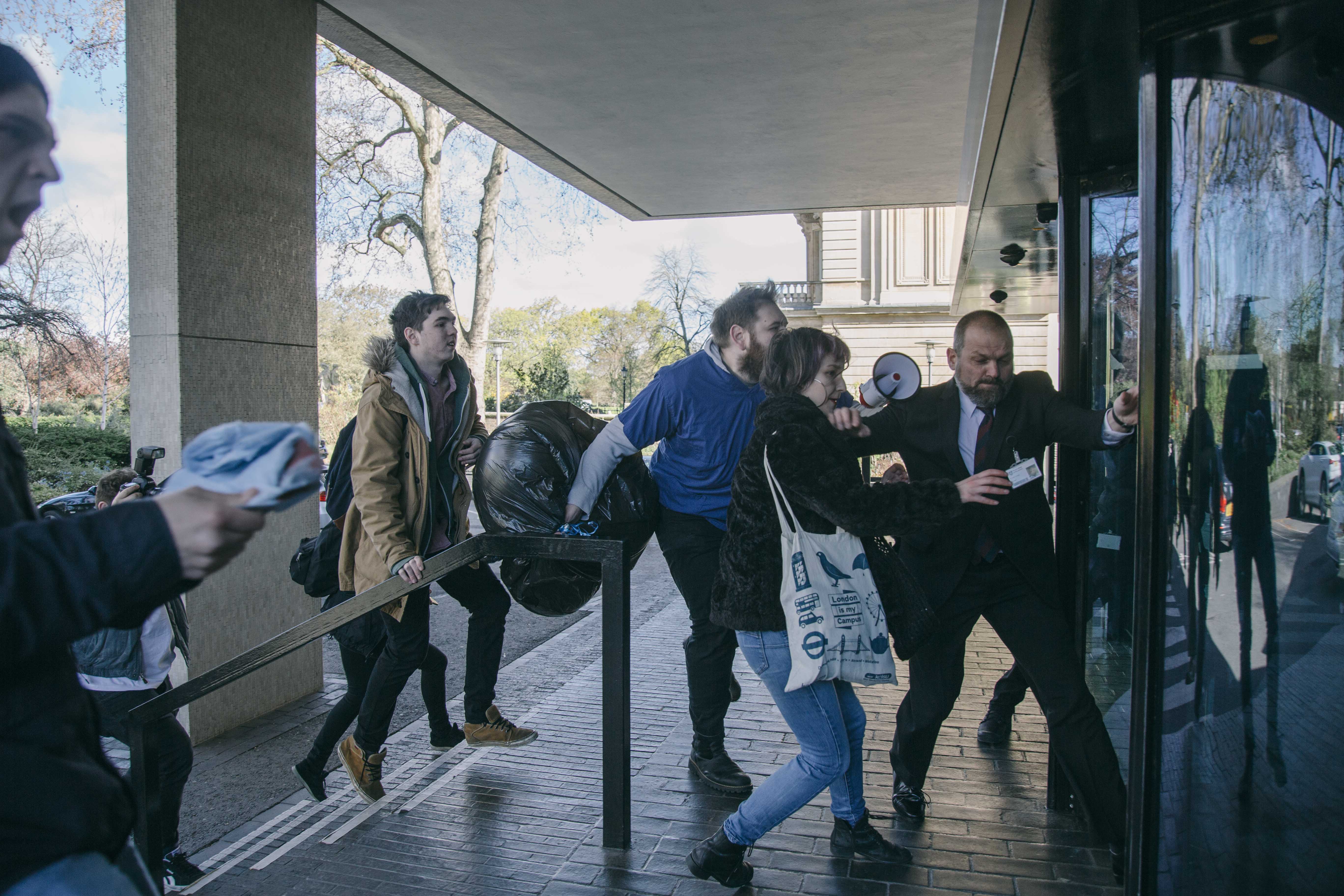 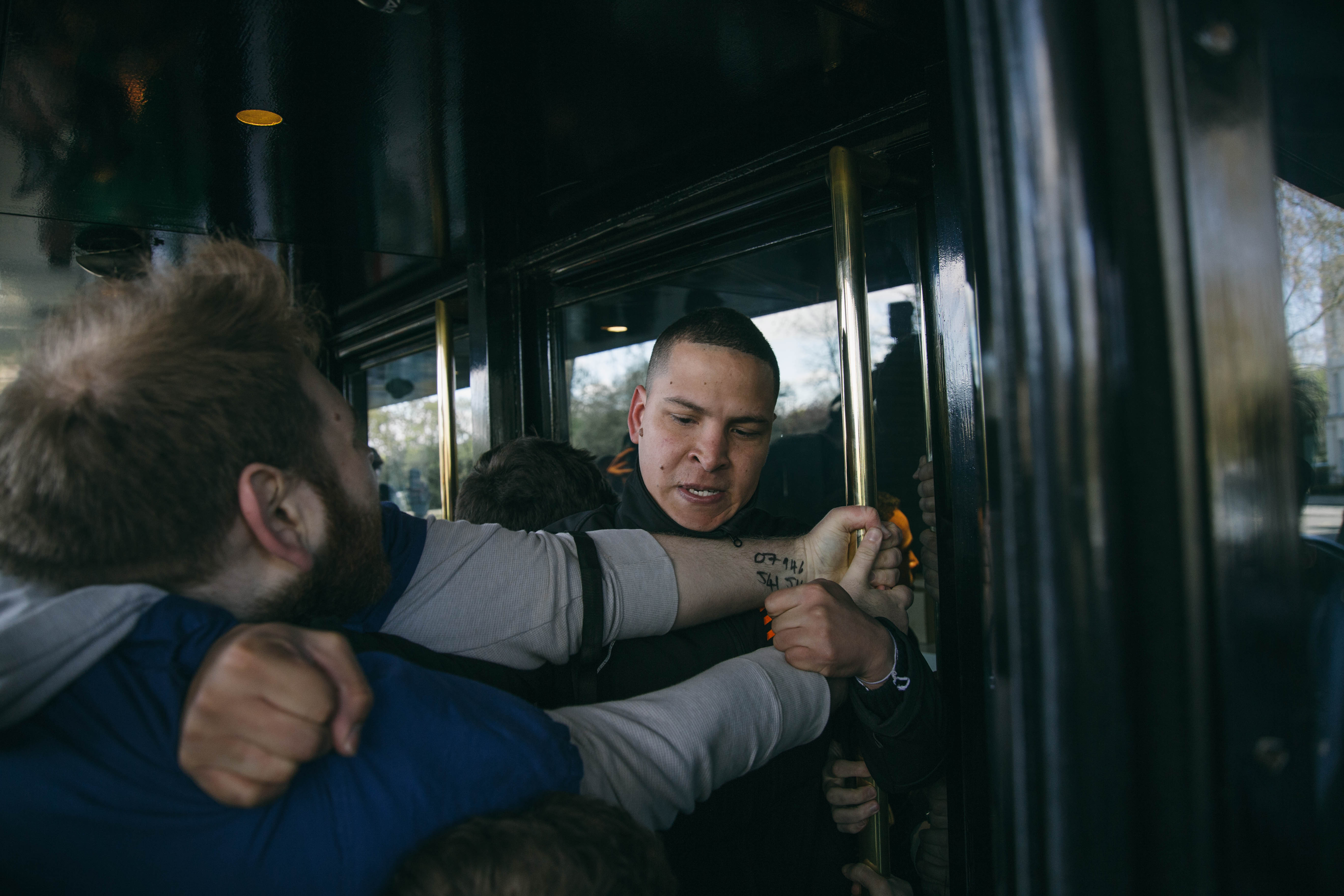 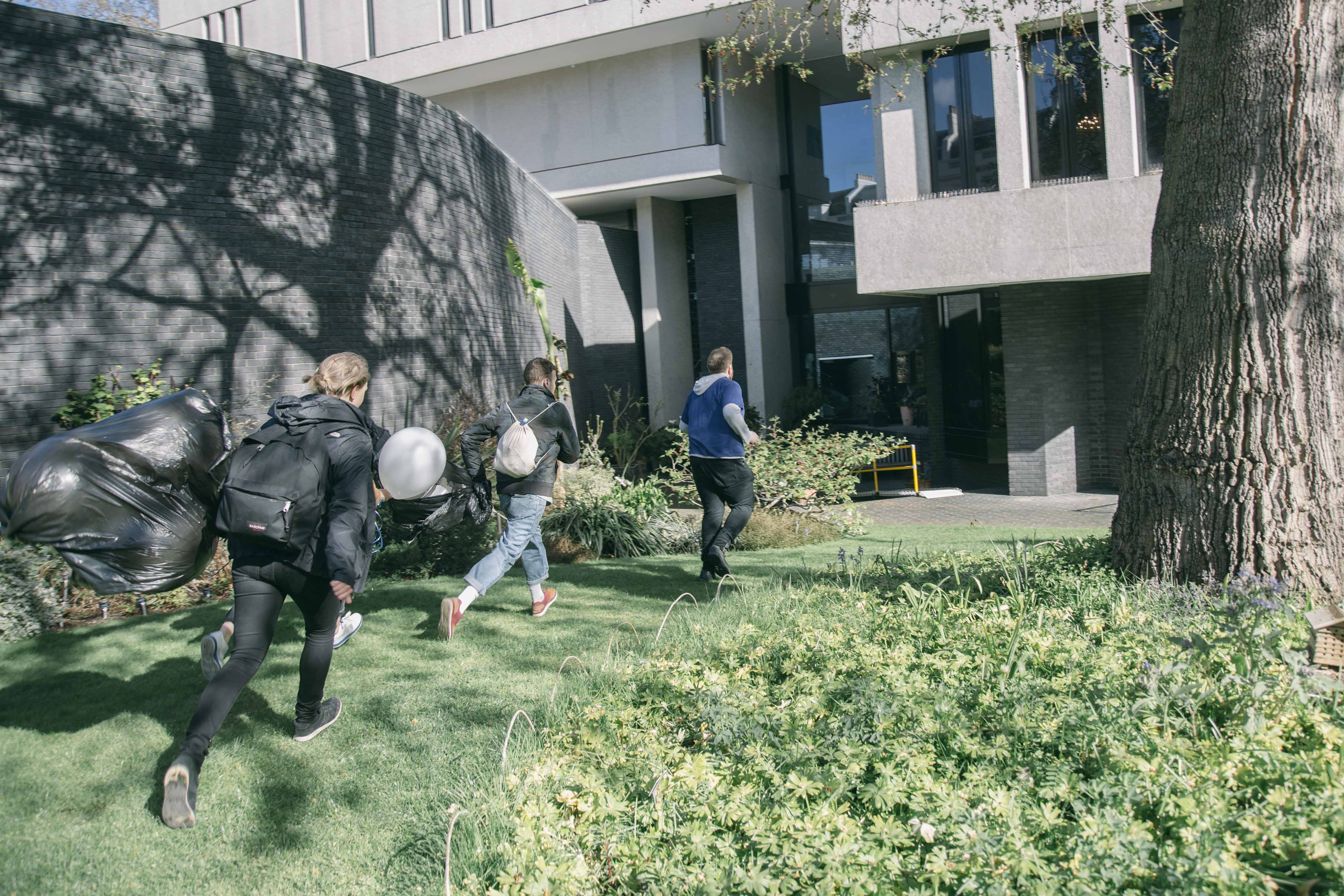 There was a bit of a scuffle with the security guards, who didn’t seem down for a party. It became obvious pretty quickly they’d not be getting in the front, so a group of protestors scarpered round to the back garden, in the hope they’d find another entrance.

Making our way round there I got chatting to Tim Maynard, an organiser with Unite the Union, the UK’s largest trade union.

“We’ve got reps from big-pharma and private healthcare companies here today from around the world”, he explains to me, as some bemused looking chefs get called over to help build the barricades.

“They’re planning how they can take advantage of opportunities this government is presenting them with to take over the NHS. Everyone can see what’s going on. These meetings take place regularly, and we’ll do all we can to make sure we stop.”

Round the back of the building were three doors, one of which was standing open. A bunch of security guards arrived just as the stink-bomb laden protestors rocked up too. The call out for backup went to the kitchens, and soon the catering department were getting involved and throwing punches. 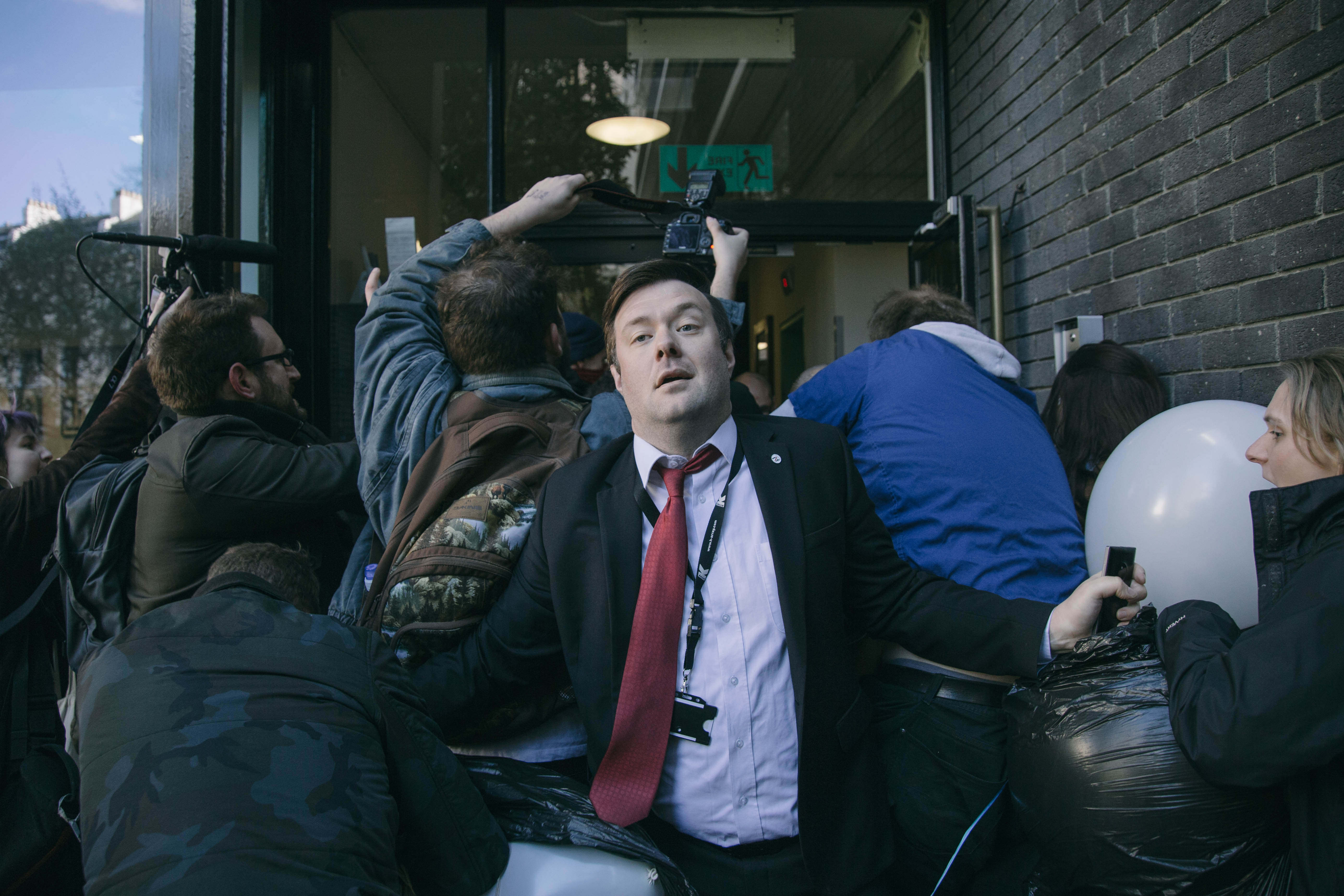 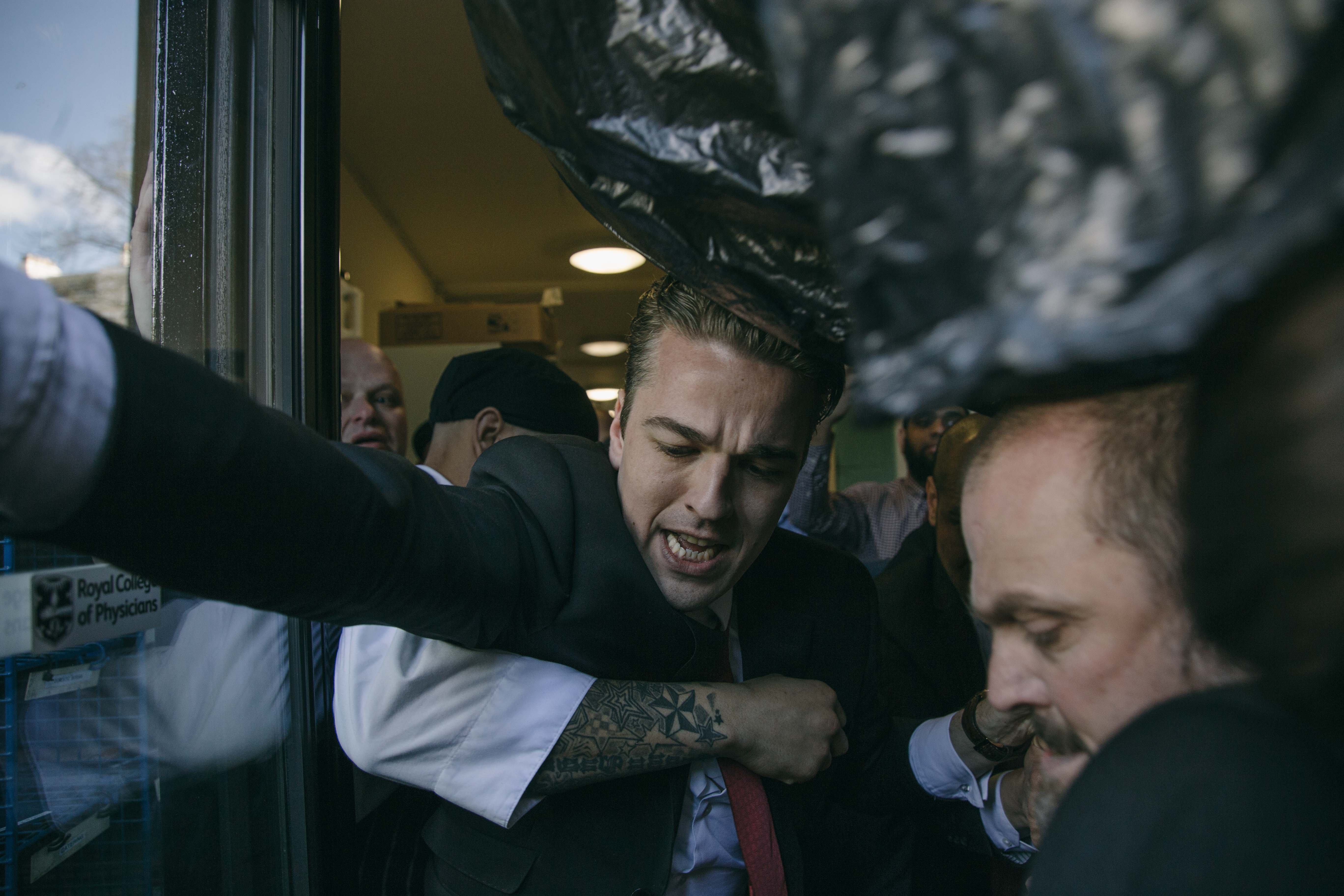 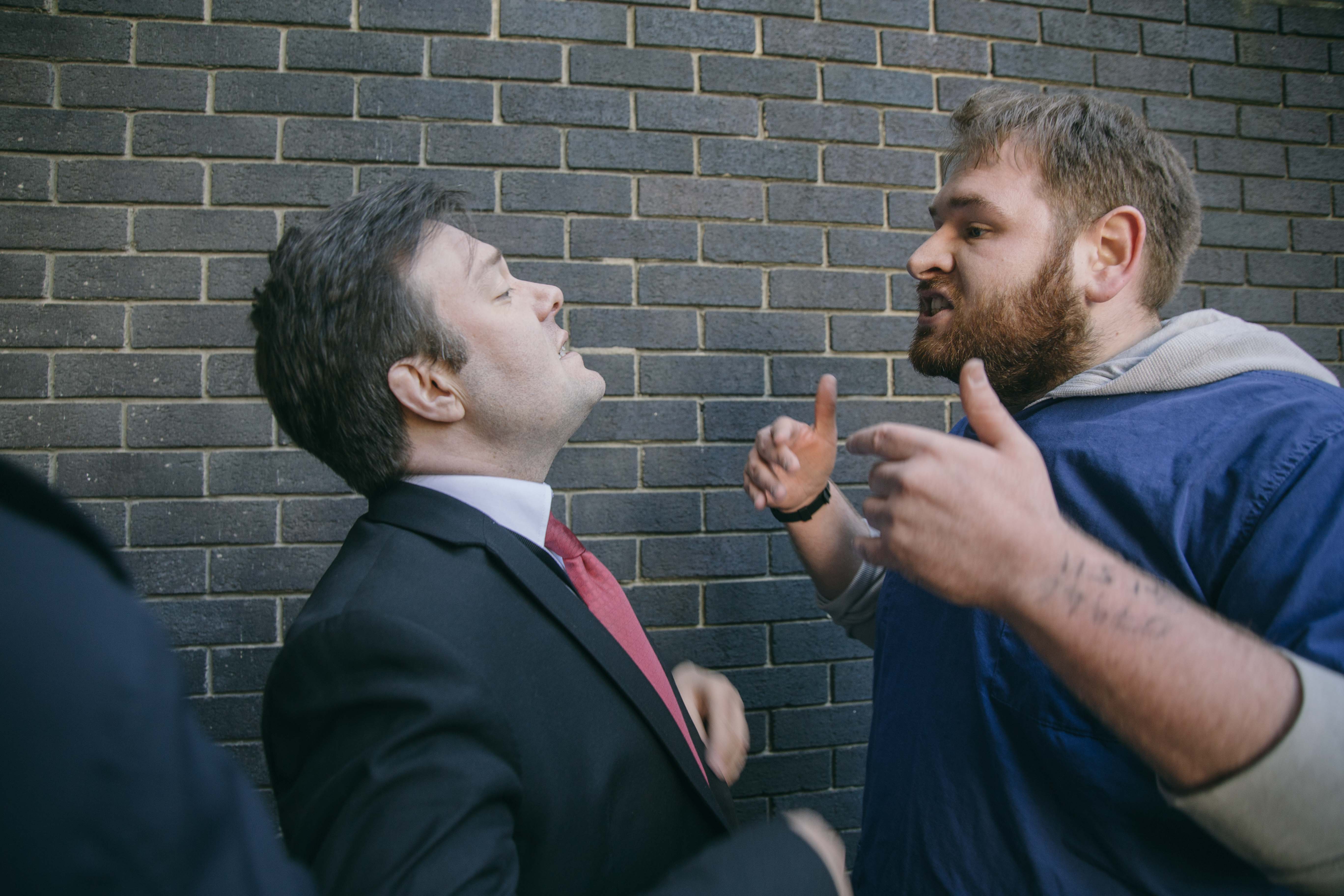 The scuffles continued for ten minutes as they tried to barge their way in through whatever entrances they could find.

Someone had clearly called the police, but when the boys in blue didn’t seem too bothered, leaving the protestors to continue as they whispered how they sort of agreed with the whole “please don’t sell the NHS” thing.

Back out the front I got chatting to Chris, a nurse, who tells me he is here today for his patients. 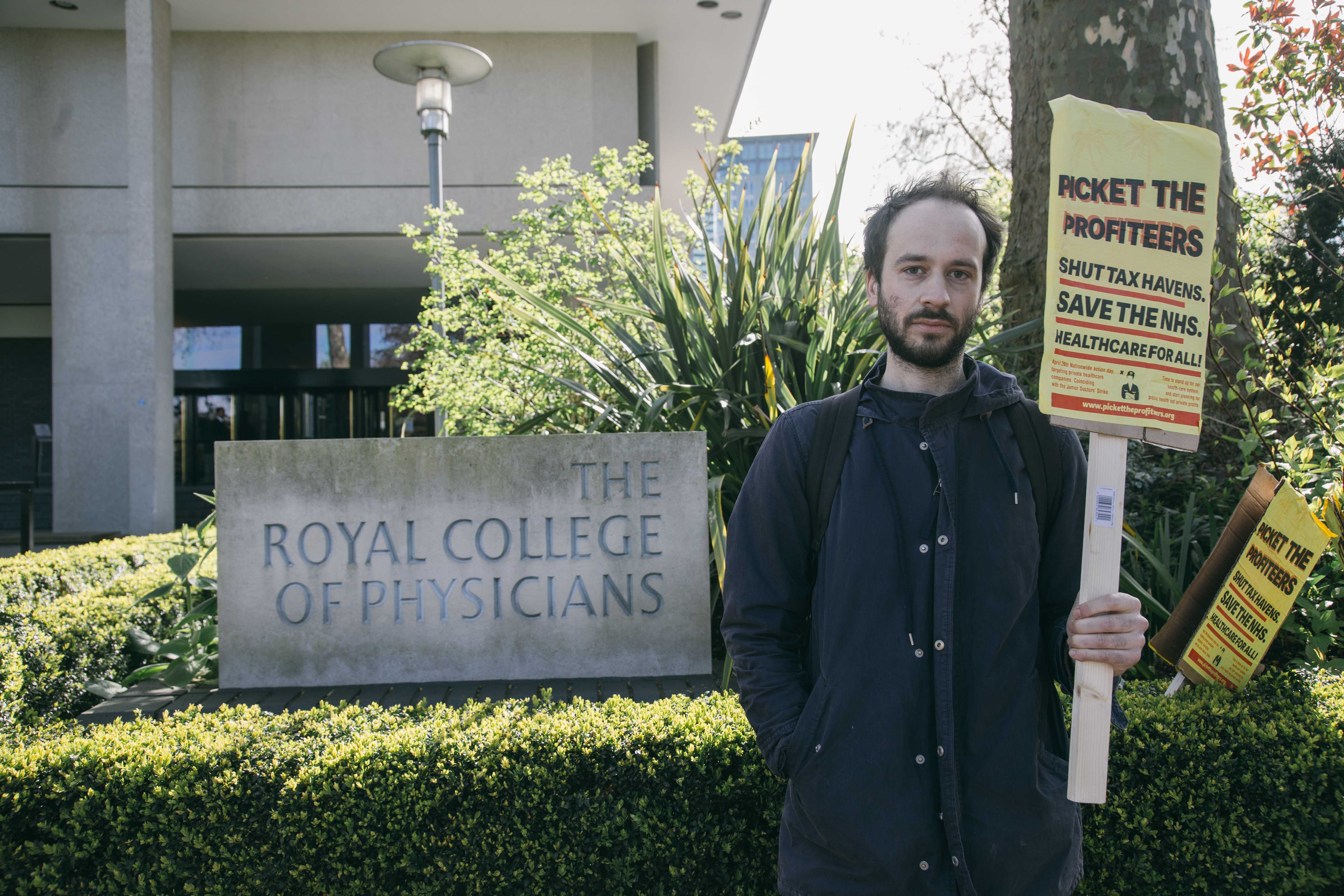 We asked the Royal College of Physicians if they regretted inviting the private healthcare industry into their offices, but they didn’t seem to.

“A range of sectors that are considered incompatible with the RCP, as a charitable health body, include the alcohol and tobacco industries, arms manufacturers and political organisations,” a spokesperson told Huck. “There is currently no restriction on private healthcare providers and organisations, for whom some of our Members and Fellows work for in internationally and in the UK.  As such it was deemed that there were no grounds for the RCP not to accept this booking.”

They did however assure us that the organisation is “absolutely committed to preserving and promoting the principles and values of our NHS.” This may well be true, but campaigners reckon this was a funny way of showing it.

Linkedin
RELATED ARTICLES
OTHER ARTICLES
50 years since its inception, and the campaign calling for recognition that capitalism depends on domestic labour is as pertinent as ever.
In the latest instalment of Photographers in Conversation, the chronicler of raves, protests and beyond explains why he’s drawn to such specifically visceral environments.
Over a dozen Stop Deportation activists locked themselves to each other outside a detention centre to prevent coaches taking those due to be on the Rwanda deportation flight from leaving.
With inflation now at a 40-year-high of 9 per cent, demonstrations organised by TUC took place to demand action from the government.
The curators of a new exhibition are hoping to shed light on Plymouth’s vibrant but often overlooked nightlife.
Freddie Miller’s new series of photographs investigates who today’s trainspotters are and what drives their unfettered enthusiasm.