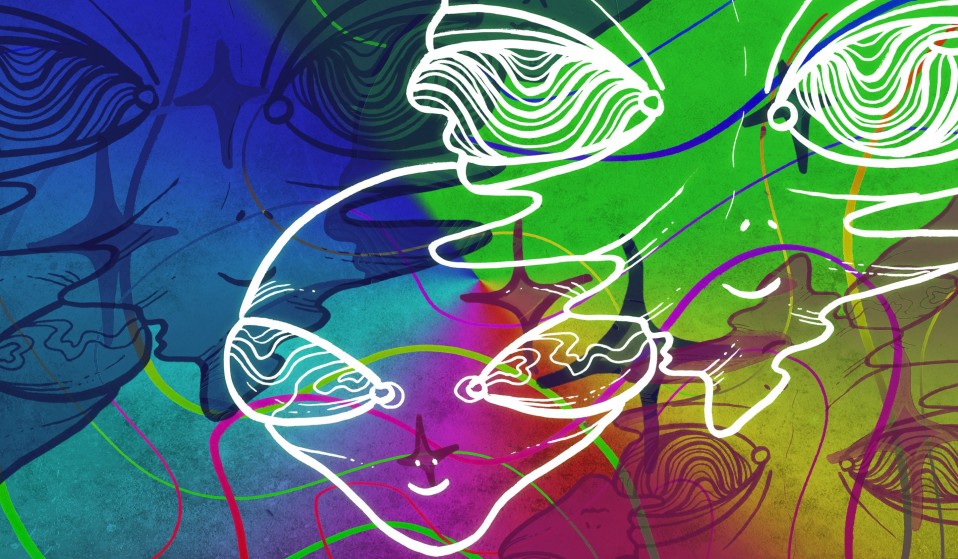 We talk to therapist Daniel McQueen about his plan to help humans explore higher dimensional spaces: which he claims may be populated by aliens and god-like entities – through the use of psychedelic medicines.

We talk to therapist Daniel McQueen about his plan to help humans explore higher dimensional spaces – which he claims may be populated by aliens and god-like entities – through the use of psychedelic medicines.

Daniel McQueen is a mindfulness-based therapist, cannabis educator, and healing practitioner based in Boulder, Colorado. On a quest for new spiritual experiences, he uses plant medicines like cannabis to help his clients make a connection with something bigger than themselves.

After completing a masters degree in Transpersonal Counseling Psychology, McQueen took part in the first FDA-approved study on MDMA-assisted therapy for PTSD. Inspired by that work, McQueen and his wife founded Medicinal Mindfulness – a grassroots organisation which supports individuals and groups who use cannabis and psychedelics “with intention.”

He now hopes to legally research DMT, the hallucinogenic drug known for producing an intense but brief psychedelic experience, which is found in the ayahuasca brew used by people in Central and South America. A DMT experience is around 15 minutes, with the peak lasting roughly 5-7 minutes; other psychedelic experiences typically last several hours.

McQueen is currently recruiting ‘Psychonauts’ – a term coined by Ernst Jünger in 1970 – from all over the world to explore the next frontier with DMT. Daniel McQueen’s goal is to extend the peak of DMT, allowing Psychonauts to safely explore the higher dimensional spaces – spaces which he claims may be populated by aliens and god-like entities.

He is calling this new endeavour Extended-State DMT or DMTx, and his goal is to have the Psychonauts trained and a location secured by 2020. We caught up with him to find out more.

What exactly is a Psychonaut?
The term ‘psyche’ means mind or soul, and the ‘naut’ means an explorer or sailor. Anybody that intentionally uses these medicines to explore consciousness, psyche, or their spiritual world would be considered a Psychonaut.

Can you explain more about your plans to develop an Extended-State DMT (aka DMTx)? How exactly will it work?
For DMTx, we would combine a targeted infusion pump technology with a pharmacokinetic model of how DMT gets absorbed and metabolised. The goal is to make it as long as possible. When you extend the peak length to 10 to 15 minutes, that’s double the normal DMT peak. That’s pretty significant.

And you want to extend the peak because you want that the psychonaut to retrieve information? …From where?
Well, to have an opportunity to have a longer conversation with whatever is happening out there. Your nervous system is super activated. It isn’t just floating around the earth – it’s having direct encounters with entities.

Most of the time people are activated in that five minutes. I’d like to think of giving yourself more time for your nervous system to calm back down while still being in the space. Then you can engage, look around, and explore. I’m also interested in the terrain. Is it a visual representation of our psyche? A higher dimensional space? A spirit world?

Has anyone done a version of Extended-State DMT yet?
There are stories in the psychedelic underground communities of people using morphine drips and pushing the button repeatedly. I know of one report where an infusion pump was used. But I don’t think anybody’s ever done the pharmacokinetic model. They were guesstimating when they were pushing the flow rate.

Is it dangerous?
A lot of Psychonauts are self-experimenters, so risk-taking is pretty common among us. There’s a difference between skilful risk-taking and inappropriate dangerous recreational risk-taking. The difference is skill, awareness, and maturity. As a psychedelic community, it’s time to start differentiating between those two.

Adding drugs to increase the DMT durations is not Extended-State DMT. It’s those drugs plus the DMT. The longest DMT journey I’ve ever had was with ayahuasca: it had DMT in it and MAOI, but I wasn’t able to break through. It was a difficult experience. At the end of it, I decided to try to break through by smoking DMT because I had MAOI and other medicines in my system. I had an hour-long peak DMT experience.

That sounds scary.
It was amazing.

Did you feel in control?
No, I was in a psychedelic state. There was no coming out of it. I’m trained to engage it, be with it, and acknowledge it, so I just rode the wave of it.

Are you able to be aware of both realities when on DMT?
Well, that’s where skill comes in. I teach people how to stay cognizant of who they are and fully engage in the experience. Not everybody can do that. For most people it’s such a fast experience that the only thing you can do is surrender to it, witness it, and try not to freak out because it’s such a blast off. We call it the DMT flash because it’s five to seven minutes.

Does it seem like five minutes?
It seems like a moment in time but also like an eternity. It’s like a space beyond time so you can think regarding higher dimensionality where time becomes a spatial dimension. You can travel through times of spatial dimensions.

I don’t understand.
It’s bizarre, and it seems to be populated.

Is there any familiarity with that space when you use DMT more than once?
Sometimes it’s very different, but there are definite themes in my experience. The same spirits come to me and welcome me. It’s like meeting old friends or family. They use lights and colour to communicate. They seem to communicate through visuals, so they don’t seem alien or angelic to me. They’re higher dimensional entities.

Who is the ideal Psychonaut candidate for DMTx?
Are they doing interesting things in the world? Are they functional? Do they have a support system? Can they function in a world? Do they have relationships? These are all things that healthy individuals have.

This September, we are doing a training retreat, a community gathering and bringing everybody who’s interested in DMT work to come together and figure out how we’re going to get it going.

When do you think will DMTx happen?
The goal is 2020. I think once we get over the where and where we get the medicine, both are doable. You know we haven’t established that yet. Once we get that, then we are good to go.

Do you have what it takes to be the next Psychonaut? Learn more about the application process on Daniel’s official website.

The interview has been edited and condensed for clarity.

Linkedin
RELATED ARTICLES
OTHER ARTICLES
While protests over abortion rights rage in the US, access to abortion services is still almost nonexistent in parts of the UK.
For decades, Wilmslow Road has been a bustling area full of curry houses. But how did it come to be what it is today?
Photographer Robin Graubard’s debut book offers an unflinching record of turbulence and change across the Balkans.
From the Yakuza to a biker gang, Bruce Gilden recounts capturing Tokyo and Osaka in the ‘90s.
So far, 11 million people have fled Ukraine. But what happens to the ordinary civilians who choose to stay behind?
New legislation is set to make it more difficult to hold Israel accountable for its human rights abuses.