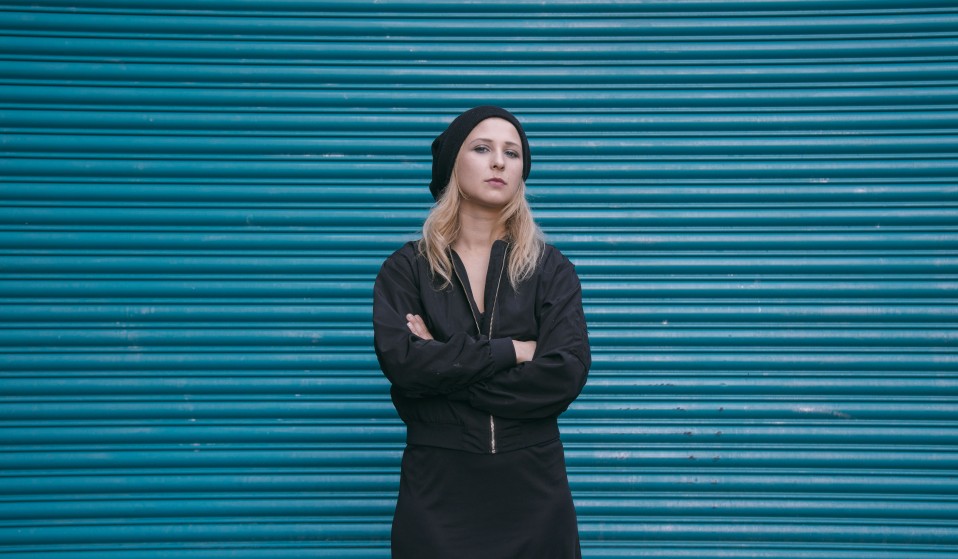 We've all seen the videos and pictures of Pussy Riot taking on the Russian state. But for Maria Alyokhina, a life of challenging authority and paying for the consequences started young.

We've all watched the videos, we've seen the pictures of Pussy Riot taking on the Russian state on our screens. For Maria Alyokhina though, a life of challenging the status quo, and paying for the consequences, had started many years before. Sam Williams meets Alyokhina in London, as she performs in a new play, Burning Doors.

Maria Alyokhina is having nightmares. The worst in her life. She’s been up since 5.20am, writing them down on her phone. “I need to sleep”, she says. “But let’s be honest. It’s not going to happen.”

Every night for the last month she has screamed herself hoarse on stage, she’s been repeatedly drowned to her very last breath, and she’s recounted the ritual humiliations of confinement in a Russian penal colony: cavity searches by dirty, ungloved fingers during her period, five months in solitary confinement, and hunger strikes.

Her crime was hooliganism, a conviction motivated by religious and political hatred for Pussy Riot’s Punk Prayer to the Virgin Mary to ‘throw out Putin’, performed without permission in Moscow’s Christ the Saviour Cathedral in the run-up to the 2012 Russian elections.

I meet Alyokhina in Soho, central London, in the midst of the run of Burning Doors, Belarus Free Theatre’s first performance about the Russian regime. The play is stitched together from prison testimonies of three artists – Alyokhina onstage, performance artist Pyotr Pavlensky, released this summer after setting fire to the doors of the Russian Federal Security Bureau, and Oleg Sentsov – the Ukrainian filmmaker, serving a 20 year sentence for terrorism.

The performances are brutal. A man urinates onstage, sobbing and dangling from a sling. A woman is hauled through the air on elasticated ribbons tied to each limb. Women are strangled through prison bars, they charge screaming at the audience, they are held back only by bungee cords. 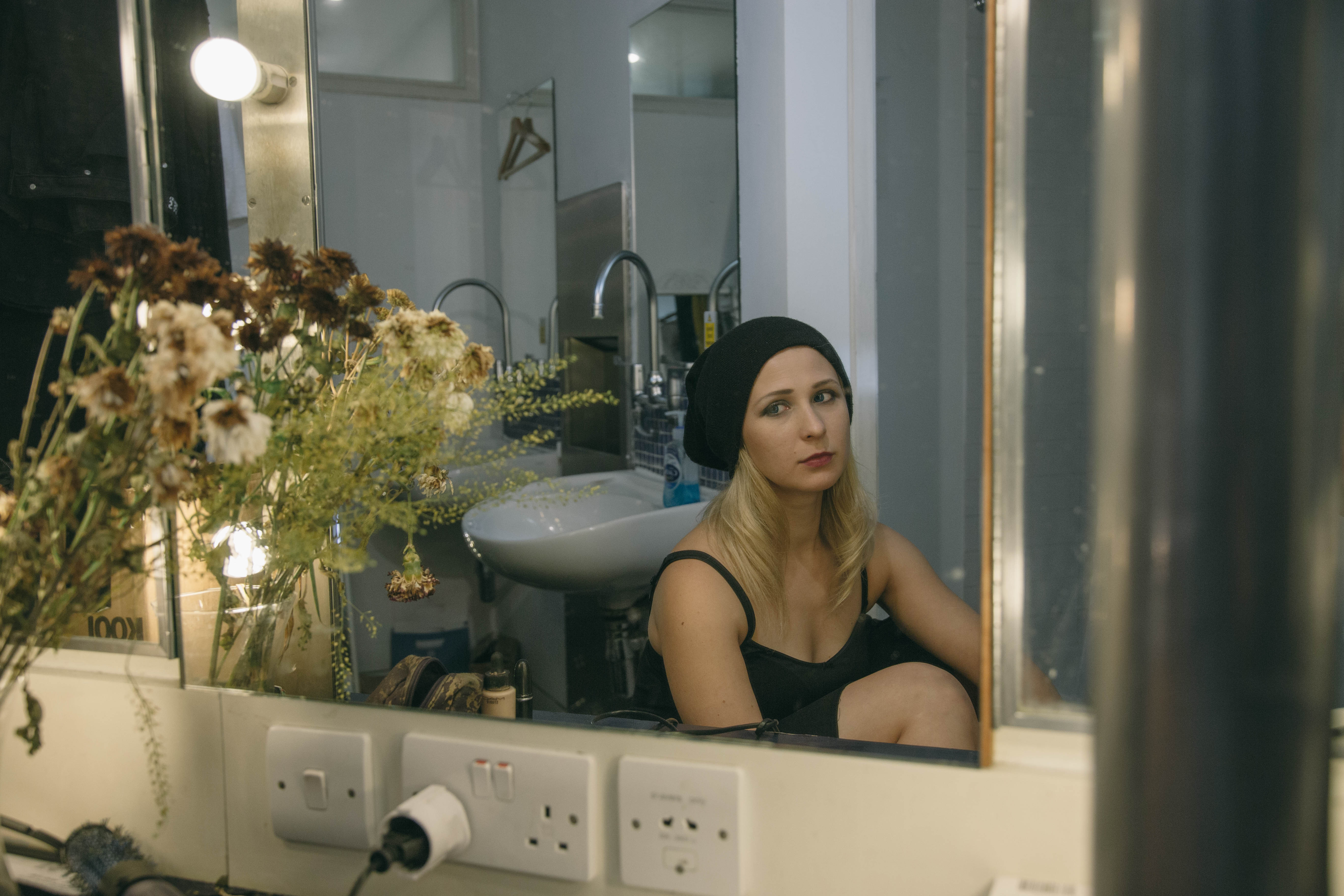 When we sit down to talk though, the rationale behind her involvement becomes clear. Putin is just a face of a system, according to Alyokhina. “If you want to change things, we have to speak to everybody – ordinary, common people. Not just to those in the circle of power.” It’s why she’s touring with the show, but as she soon made clear to me, agitating and organising is nothing knew for her.

Her own activism began young. At 15 she was sent to a psychiatric institution and subjected to daily injections of Largactil (an antipsychotic medication) for refusing to write an essay about Victory Day, a Russian holiday commemorating the defeat of Nazi Germany, and manifesting in a phallic spectacle of military might.

Every year on 9 May an endless parade of tanks, long-nosed canon, missiles, and rocket-launchers rumble through Moscow’s central streets as crowds wearing striped ribbons and carrying placards line the pavements. “I told the teacher that I hate war”, she says. “People died – millions of them – and why should I say that these people were right because they are from my country, fighting for Stalin? So they gave me the fucking tranquilliser.”

The conflicts were daily. Alyokhina went to six different schools, the last of them for the type of kids the Russians call ‘active’ – актив – planning to be lawyers, working in the oil industry, or for the administration. “I was the only one who refused to go to university,” she recalls. “I told them: I don’t know who I am.” Instead, she hitchhiked to the south coast of Russia, where she lived in the forest of Utrish, reading books and swimming in the sea.

A few years later and she was studying at Moscow’s Institute of Journalism and Creative Writing, auditing classes in film and poetry in 2008. It’s here she discovered that Utrish was destined to be cut down to build luxury villas. “I was nobody, but I knew I had to stop it, so I took my bag and hit the streets.” 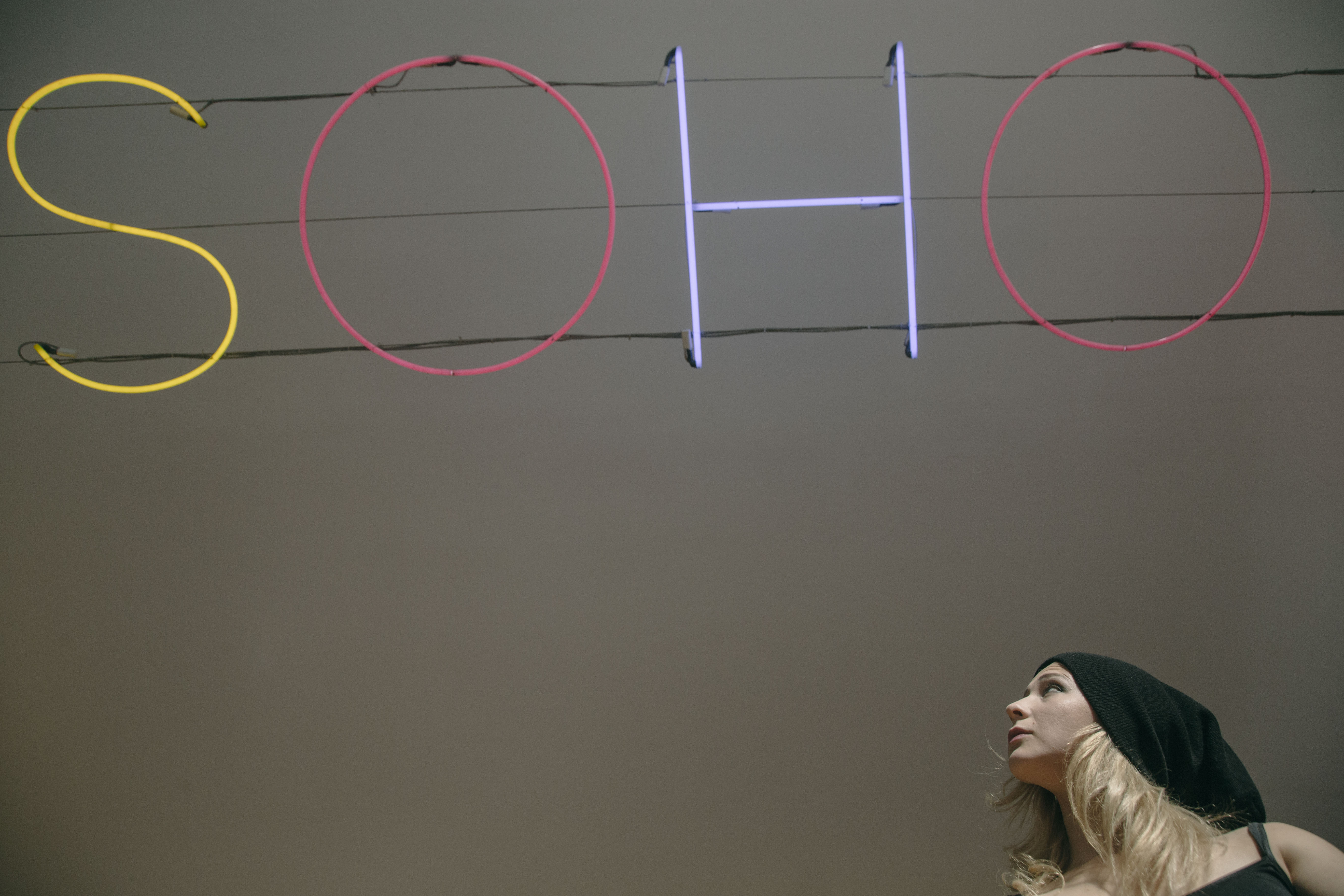 She walked into the offices of Greenpeace in Moscow. “I just said, ‘hello, I’m Masha and I have a problem – they want to cut down my favourite forest.’ They asked where it is. So I told them: ‘Oh, about 1,500 kilometres away in the south of Russia. Sure, it’s kind of small, but it’s important.’”

“They looked at me like I was crazy and sent me off to collect signatures.” A post on LiveJournal produced a meeting of three people in a Moscow subway. Within a year, through LiveJournal and VKontakte (Russian Facebook) the group had grown to several thousand.

The same year, a friend contacted Alyokhina to ask if she had access to the roof of the Hotel Ukraine, one of Moscow’s ultra-luxury hotels, a ceramic tile-clad Stalinist skyscraper, with a fleet of boats moored on the Moskva River. Alyokhina, who’d run away from home, lived in apartments in the complex.

She was asked because in the planning was a protest. The action was called ‘Occupy the White House’, and saw activists project an alien-green skull and crossbones onto the white face of the Russian Parliament. It was organised by Voina, an underground art collective incubated in Moscow’s State University and School of Photography, and based in a garage.

The name means ‘war’. Its spiritual grandfathers are the performance artist Alexander Brenner – who defecated in front of a Van Gogh and scrawled a dollar sign over a Malevich – and the mad mystics and idiots savants of Dostoevsky’s fiction. In the heads of Alykhonina and her soon to be associates, ideas started to form.

Pussy Riot took those impulses, and added the viral twist of the anonymous meme generation: with a colourful mask and dress, anyone could be Pussy Riot. The now infamous band come activist group was born.

The idea grew out of the 2011 Snow Revolution, which brought thousands of Muscovites to the streets while wearing white ribbons. “When Putin and Medvedev decided to swap chairs, everybody understood they should do something – that probably it’s the last chance. That was the first time I think the Kremlin got scared. They didn’t expect 100,000 people in Revolutionary Square.”

After performing ‘Putin Pissed Himself’ in Red Square, Pussy Riot planned the action that would get Alyokhina, Nadia Tolokonnikova and Ekaterina Semutsevich arrested. “Maybe it sounds small and pragmatic,” she says, “but we were thinking how to get a guitar inside a cathedral.”

When you start to do something, she says, you don’t think about whether you’ll go to prison, or what they will write in history books. “No. Of course not. You just do.” They did, a close to two year prison spell, one that’s been pretty well documented, was soon to follow.

If Alyokhina’s actions pre-prison were all about revolt, her time insider saw her efforts shift towards human rights. “If you are in a penal colony with 5,000 women who do not have a lawyer, and you do, you have a responsibility, because everybody sees what you have.”

Her activism inside started small, reading the prison code and confronting abusive guards, which landed her in solitary confinement. Then she started to write down abuses, submitting papers to the prison administration and inspectorate through her lawyer, who kept her informed of demonstrations outside. 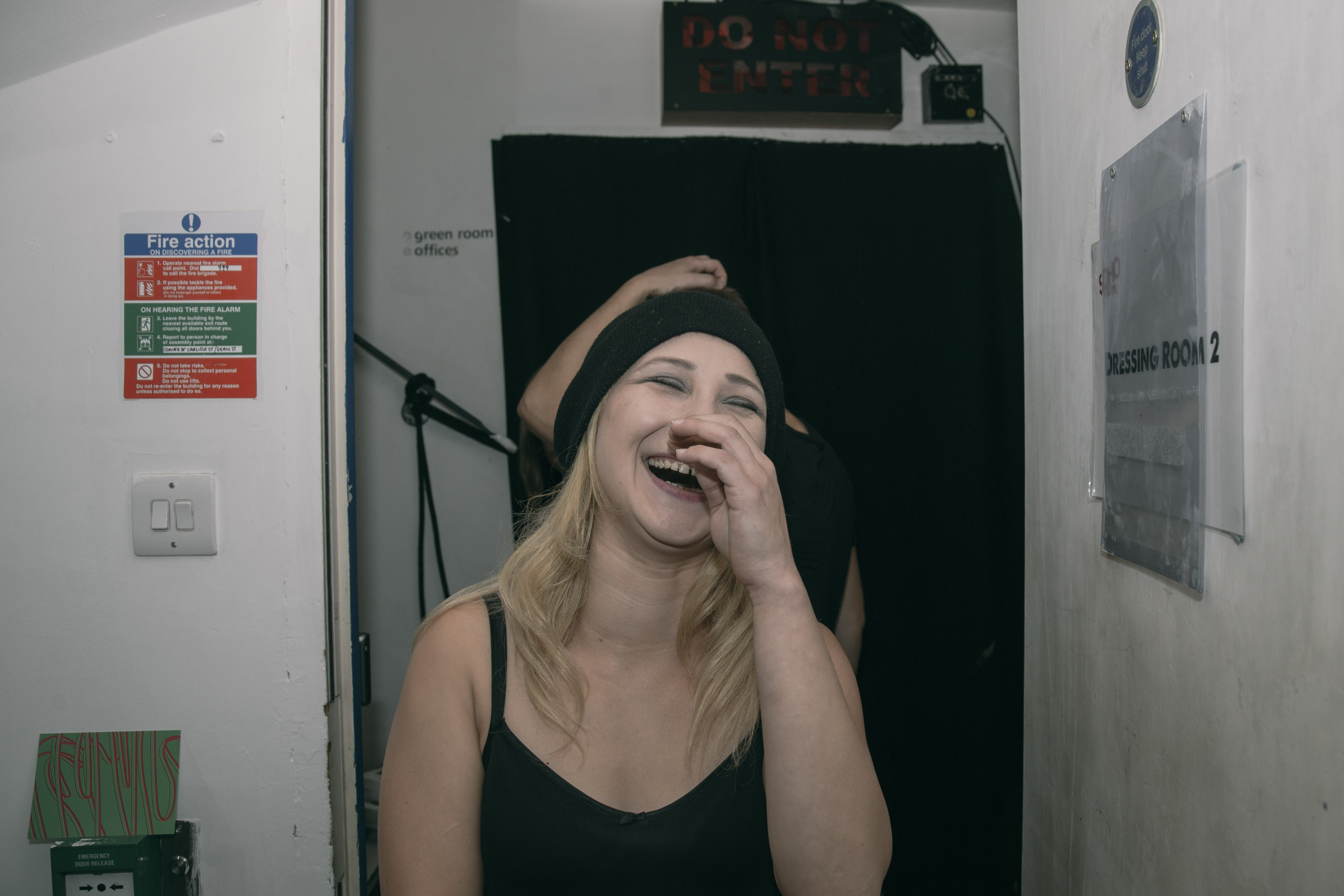 She went to court, and won. Eight prison guards were fired, salaries were increased, and prison barracks were rebuilt. “Maybe from here it sounds like nothing,” she says, “but if you’re in a penal colony in the middle of the Ural Mountains, and there isn’t any milk in the prison shop – and afterwards, you have this milk – it’s a small revolution.”

On leaving prison she founded Zona Prava, an organisation for defending prisoners rights with Tokolonnikova, and Media Zona, an independent Russian media site.

“I knew that if I do not do this, I would be an example of a fucking victim,” she says, “another girl-victim imprisoned by a bad government. And I totally didn’t want this fucking image. I wanted to show that even if you are just a prisoner in the middle of nowhere you can win. And it’s possible. It’s really possible.”

Burning Doors, a production by the Belarus Free Theatre, is now touring the UK before going to Italy and Australia.

Linkedin
RELATED ARTICLES
OTHER ARTICLES
Activists and campaigners are fighting back against new laws that would seriously undermine the ability to take industrial action, calling it an attack on fundamental workers' rights.
After blocking the Scottish government’s gender recognition reform bill, Westminster is now devising further changes to the law to make it harder for trans people to self-identify.
As she gears up for the release of her first book, the 24-year-old climate activist talks standing up to authority and building a more inclusive movement.
A new exhibitions brings together the work of photographers who documented the deep unrest of these pivotal decades.
A new podcast is opening up the conversation between trans women and trans amorous men in the hope of building coalitions.
Tristan O’Neill’s shots of dancers caught in moments of reverie at the height of rave’s golden age are a testament to the UK’s legendary club culture.