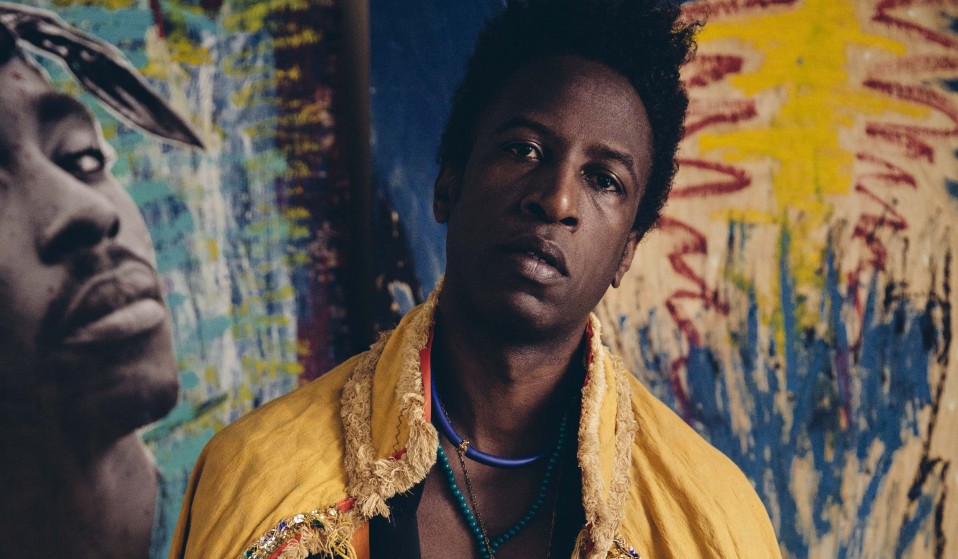 Ahead of his show at London’s The Last Word Festival, we speak to the seminal poet, rapper and activist about the power of language, digital activism and Kanye West.

Ahead of his show at The Last Word Festival in London, we speak to the seminal poet, rapper, writer and activist about the power of language, protest in the digital age and why Kanye West represents the dangerous pinnacle of celebrity culture.

In the world of rapper and poet Saul Williams, everything is happening at once.

When I finally get him on the phone (and it takes some chasing), he’s busy putting the final touches on the Kickstarter for Neptune Frost, a musical he’s written and plans to direct.

On top of that, he’s writing, mixing his next album (also titled Neptune Frost) and finishing work on a graphic novel, all of which are part of the MartyrLoserKing universe, an art project that launched in 2016 with the album of the same name. Oh, and this week, he’ll leave for Europe, where he’ll spend the summer touring.

You’d never guess it, though. Saul speaks with the effortless cadence of someone who has time to assess and analyse the individual impact of each and every word, and is as affable as he is enlightened. After all, for the poet, rapper, actor, writer and activist, busy is good. It’s in his nature.

“Yeah, that’s what I’ve been doing,” he says, before breaking into a relaxed, semi-ironic giggle. “It’s been just… crazy.”

At the end of the month, the New York-born artist is headlining The Last Word Festival in London, bringing the work drawn from MartyrLoserKing into a spoken word setting. Ahead of the show, we sat down with the seminal polymath to discuss the power of language, protest in the digital age, and why Kanye West represents the dangerous pinnacle of celebrity culture.

Do you remember when you first realised the power of language?
Yeah. I was young. I had some revelatory moments listening to Public Enemy as a kid. There were lines where I remember crying. I remember being at a party, crying, hearing ‘Welcome to the Terrodome’ or ‘Bring The Noise’. Even my parents, who were not initially hip hop fans, were like, ‘Yo, you guys are pushing it forward.’

That was obviously a particularly progressive era for hip hop.
Growing up as a hip hop head in New York – in an environment where there were also metal heads and punk kids – we had to defend hip hop. But, when groups like Public Enemy started saying shit, delivering a message over the wildest beats and noise – it was undeniable. At those moments, I was drawn by the power of sound, beats and language. Simultaneously.

Was it just music?
I had been touched by language in other ways simultaneously. For example, I started doing theatre when I was eight, and I started with Shakespeare. The first play I did at eight was Julius Caesar. I played Mark Anthony. I remember that speech – ‘if you have tears, prepare to shed them now’ – and the process in which Mark Anthony had to use words in order to convince a crowd. I realised in the power of oratory there.

Also, my father was a minister. I grew up in the tradition of the African-American church. So of course I had moments where I realised the power of language. Those people, those ministers and songwriters, they were magicians. They were connecting this ancient story to our story. This ancient, coded story of oppression to our oppression. You guys had that wake-up call recently, with an African-American preacher during the wedding over there [laughs].

I grew up surrounded by language. From Broadway, to everything I encountered in the church, to growing up in the ’80s in New York with all of this energetic new music that was coming out and taking over the streets. My life was bombarded by language as a kid.

Nowadays the distinctions between hip hop and poetry aren’t quite as strict. They’re entangled – and people seem far more at peace with that.
It’s kind of bizarre, our relationship to these terms. The thing I usually point out is that Homer, for example – the Greek Homer – was not widely read in his day, because 90 per cent of Greece was illiterate at that time. But people gathered to hear Homer speak. Homer was a spoken word artist.

The fact of the matter is that the oral history of poetry goes back even further than the written history of poetry. But it’s true, I think today people have made more sense of it. But still, sometimes, I get somewhat confused by the distinctions. We do need to also acknowledge, though, that poetry was in the first Olympics!

MartyrLoserKing examines protest in the age of the internet. Do you think that it has been blunted by its digitalisation?
No, no. I believe that we use the tools that we have in order to update modes and forms of protest. When I think of the role that television played in the civil rights movement, when people began to see how white southerners were treating African Americans on TV – when they saw those firehoses, when they saw the body of Emmett Till – and when that technology entered households commonly across the country, it shifted the discussion. Technology today, it doesn’t blunt it, it shifts the discussion.

Those that are in power will do anything to maintain that power. They are the ones that will thwart and blunt movements. They’ll use technology to do that. But, when I think of the Arab Spring, all the way up to the #MeToo movement, technology has aided the process. It’s made it easier for people to speak up. Technology, like electricity, is on our side [laughs]. 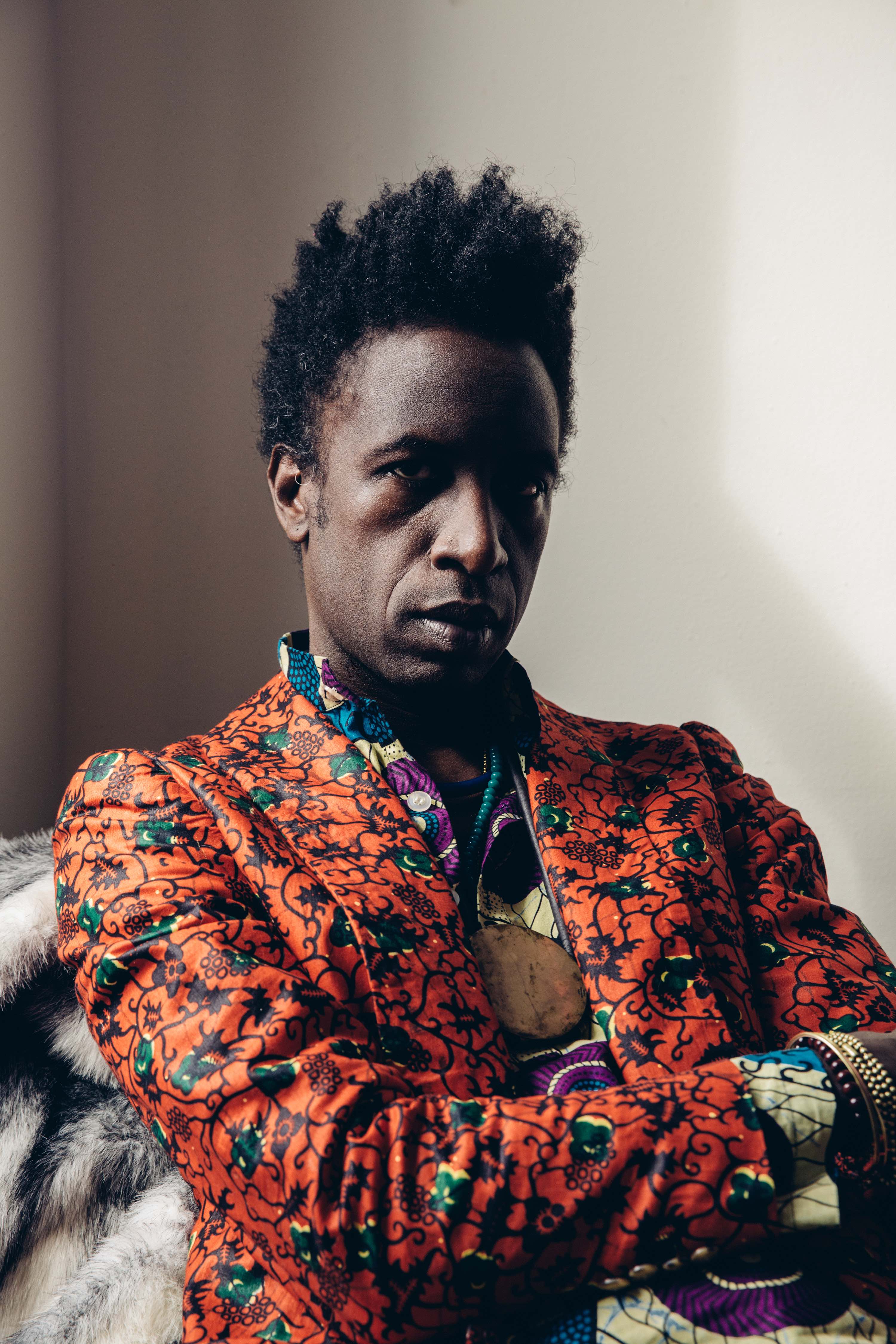 Speaking of which – in America, you’re experiencing your first digital president with Donald Trump.
He is the most fucking analogue dude ever!

True. And that’s an interesting juxtaposition!
This dude isn’t digital, he’s so fucking analogue! But I know what you mean. Yeah, this country and these people… dude, what can I say that you don’t know? [laughs] This is the sort of stuff that was scaring some of us 20 years ago, when we saw the popularity of the reality show in relation to art – seeing the crazy role that celebrity plays on the mind.

When you look at young people – progressive, political and digital natives – do you feel optimistic about the future?
To me, it’s not about optimism or pessimism. I had an album called The Inevitable Rise and Liberation of Niggytardust! The key word was ‘inevitable’. In-ev-it-able. The rise and liberation is inevitable, there is nothing you can do to stop it.

Like, the Saudi Arabian government trying to control the spin of how it is that women are being allowed to drive. I imagine that the government doesn’t want the world or the people there to think that they made these changes because of those women beginning to protest. They don’t want them to think that protest has power. But why are they making those changes? Because protest has power – and you can’t do shit to stop it!

You’ve said that you gravitate towards rebels. Who excites you currently?
Recently, I’ve been listening to an artist called serpentwithfeet. I’ve seen him live recently, as well. His music and spirit excites me. I also think of the countless women that are speaking up around the world, calling out sexual predators and rapists and all this shit.

Here in this country, we talk a lot about the Parkland survivors from the school shootings. I think of the people that I’ve met in all of the disenfranchised communities. I think of the natives who stood at Standing Rock and who are speaking out. This place is full of rebels right now. Full of them.

Let’s change the term to ‘visionary’. You’ve called Kanye West a visionary…
…I knew you were going to say that!

I’m sorry. Where do you stand on that now?
Well, being a musical visionary does not presume one to be a political one. Even though music is political, it doesn’t mean you’re well versed in the ways of the world. Celebrity, success, all of these things build bubbles – and people live in these bubbles. They lose, they forget themselves. Not enough as has been said about the dangers of celebrity and fame.

So yeah, it’s unfortunate, but it’s not completely surprising. You know, for example, most of the geniuses of history did not necessarily walk around calling themselves geniuses… [laughs] There were plenty of clues, if you were listening.

And there’s also plenty of confused philosophies walking around. It doesn’t stop with Kanye. I remember hearing the Biggie song with the chorus ‘Get Money’ and everybody singing along. I was like, ‘Holy fuck, if this shit’s our relationship to capitalism…’ Jay Z said in a song once, “I couldn’t help the poor if I was one of them.” His confusion is not realising how many freedom fighters stood and helped the poor without having to be rich to do.

There’s a lot of confusion floating around. That confusion is the shit that voted for Trump in the first place. That warped sense of self and identity that tells you that a person like that will protect you, a poor white person who that dude has never given a fuck about. But because of identity politics and a game of belonging, you think, ‘Yes! This is my representative!’ I think it’s Balzac who said, ‘Behind every great fortune is a great crime’.

In that respect, do you ever think about your own personal legacy?
Not yet [laughs]. No. I just think of what’s meaningful to me about the world that I want to live in and what I can contribute that world a reality.

Saul Williams is playing at The Last Word Festival on June 30. For tickets, visit the Roundhouse website.

Linkedin
RELATED ARTICLES
OTHER ARTICLES
With inflation now at a 40-year-high of 9 per cent, demonstrations organised by TUC took place to demand action from the government.
The singer-songwriter discusses her intimate new project – and the advice she’s picked up across a career as one of rock’s leading voices.
50 years since its inception, and the campaign calling for recognition that capitalism depends on domestic labour is as pertinent as ever.
In the latest instalment of Photographers in Conversation, the chronicler of raves, protests and beyond explains why he’s drawn to such specifically visceral environments.
A new report has found that the majority of Britains approach trans issues with compassion. It’s about time this was reflected by our media landscape.
The author discusses the all-consuming nature of heartbreak, and turning the experience into an incisive exploration of love and loss.