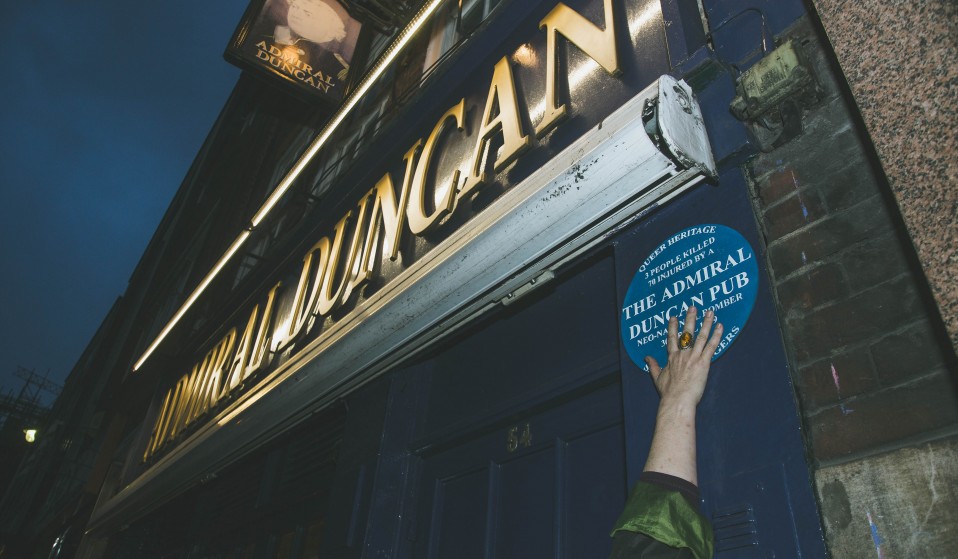 We tagged along as LGBT activists ad-hacked sites across central London to commemorate LGBT history.

Blue plaques might commemorate important sites across London, but they're the reserve of the white, straight and male. We tagged along as activists ad-hacked important sites of LGBT history across central London to commemorate London's queer culture.

The Sexual Avengers assemble under cover of darkness at Piccadilly Circus, where the homosexual prostitutes known as “dilly boys” also once gathered. Not that you’d know it these days: the Soho site is all advertising hoardings and man-high LCD screens, with no sign that rent boys once hustled for clients along the boulevards of the tourist trap.

That’s why this new direct action group want to reclaim the radical history of queer liberation, refusing a corporate-sponsored Pride culture where the Conservative government can claim credit for the progression and advancement of LGBTQ* rights, despite Theresa May having a seriously homophobic voting record in Parliament. 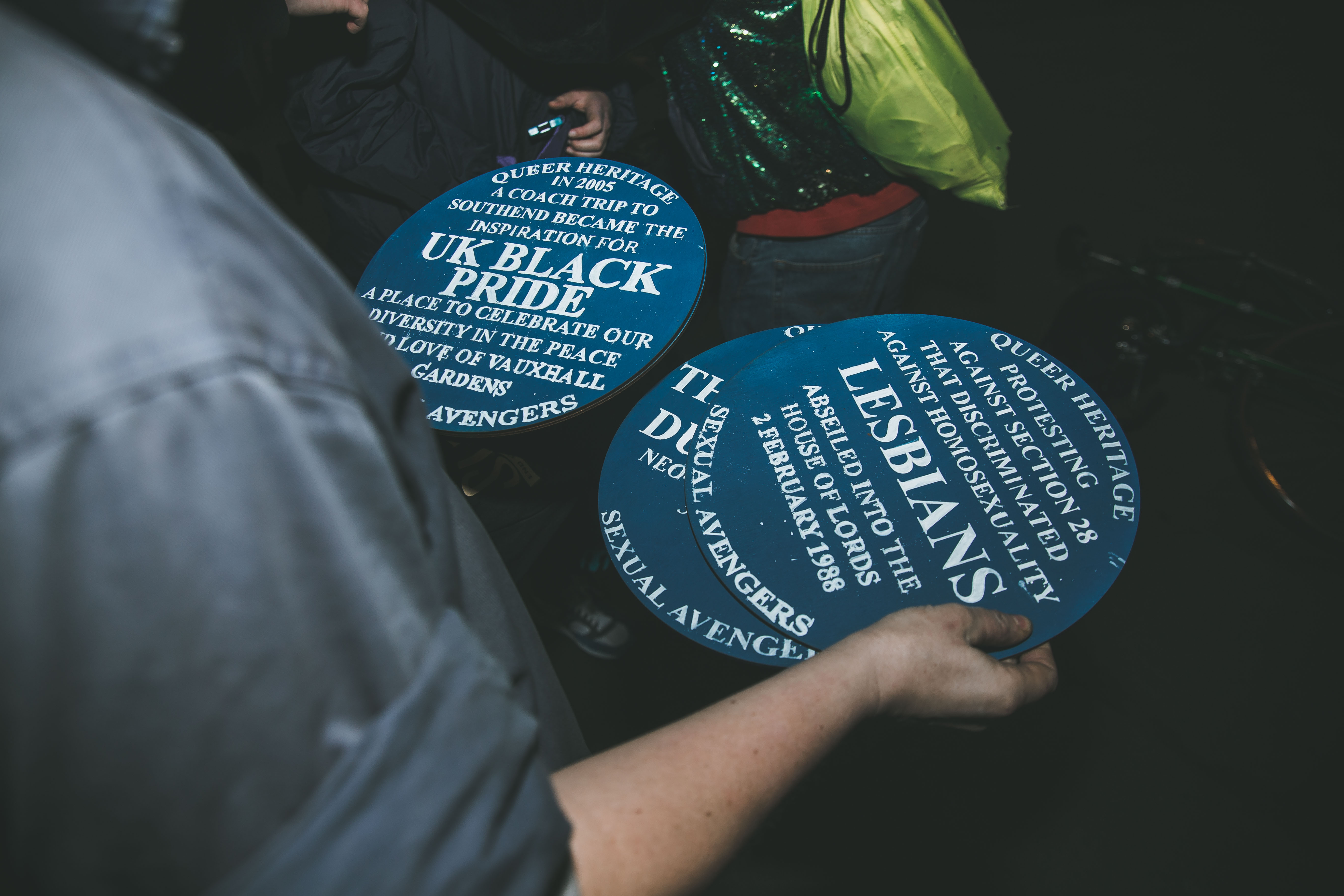 “Many of us grew up with Section 28 in place,” Avenger Lucy Warin tells me as her comrades emerge from the night. She is referring to the Conservative legislation which banned material ‘promoting’ gay relationships from schools and council-funded projects. “Our rights were robbed from us – we don’t know the history of the struggles which brought an end to these tyrannical doctrines.” Section 28 was only repealed in 2003, and Prime Minister Theresa May voted to keep it.

Laws like this only changed due to tireless campaigning and activism, and as we stand in the early morning darkness the Avengers make their mission clear: they want the LGBT community and others to remember those who paved the way for them, and to see there’s a long way to go before queer activism can become a thing of the past. 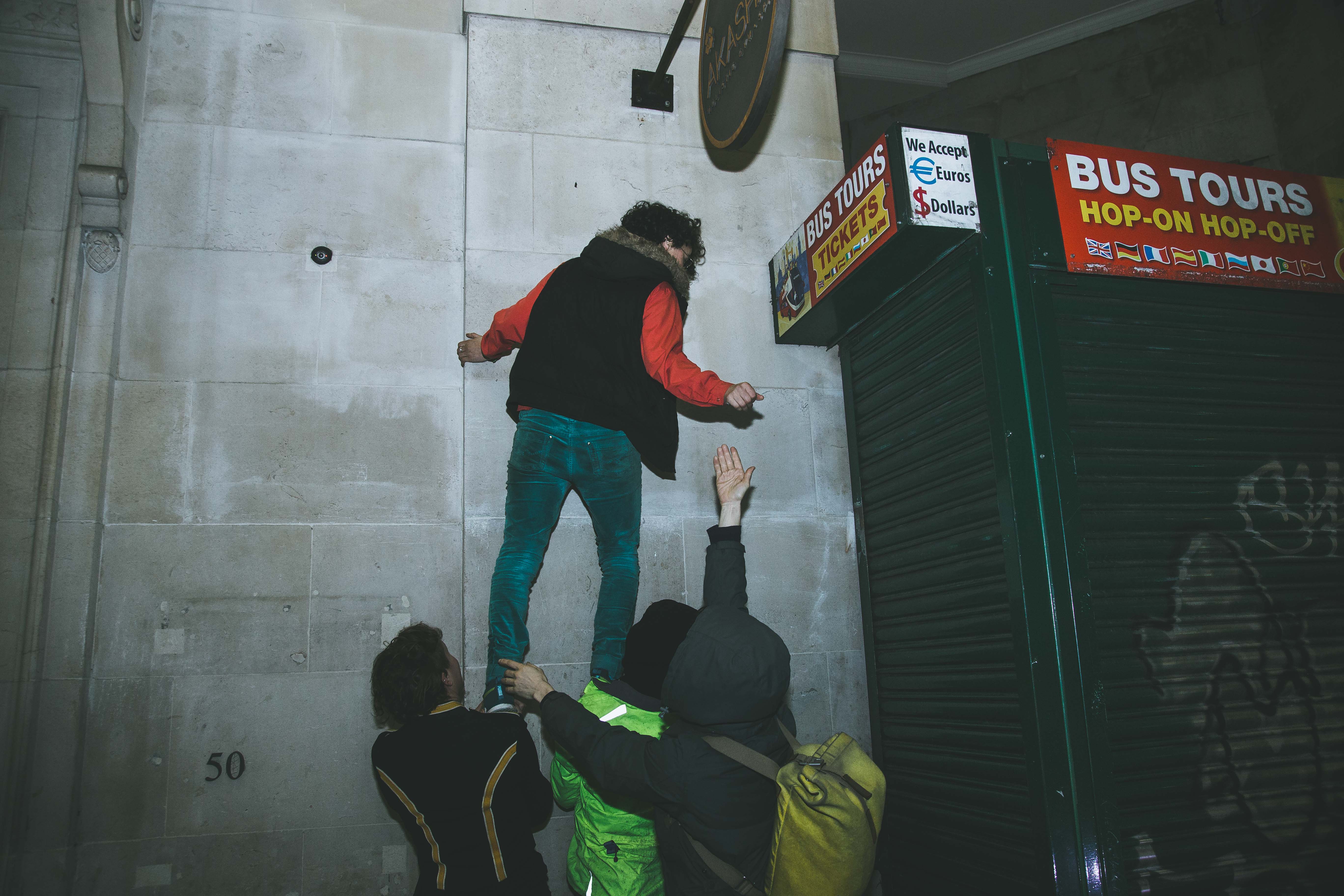 In the midst of LGBT History Month, and this year marking half a century since the decriminalisation of homosexuality, the Avengers have assembled a flying squad of activists to sweep through London, making important locations for queer history with a traditional (and fake) English Heritage plaques, the blue signs which stud the homes of London’s great, good, and heterosexual.

With the briefing over it’s time to hit up our first location. Just thirty years ago four lesbian activists abseiled into the House of Lords in Westminster to protest the latent homophobia of Section 28, but their brave intervention is unlikely to appear in GCSE textbooks any time soon. There’s barely any trace on the web.

Despite a few dodgy looks from the cops and security, the first early morning action passes off without any major glitch. Next up we’re fanning out across the city, Lucy explains, as the team divides up targets, hitting locations like the Admiral Duncan gay pub where three people lost their lives to a neo-Nazi nail bomb in 1999, and the home of the UK’s only pride event for people of colour. 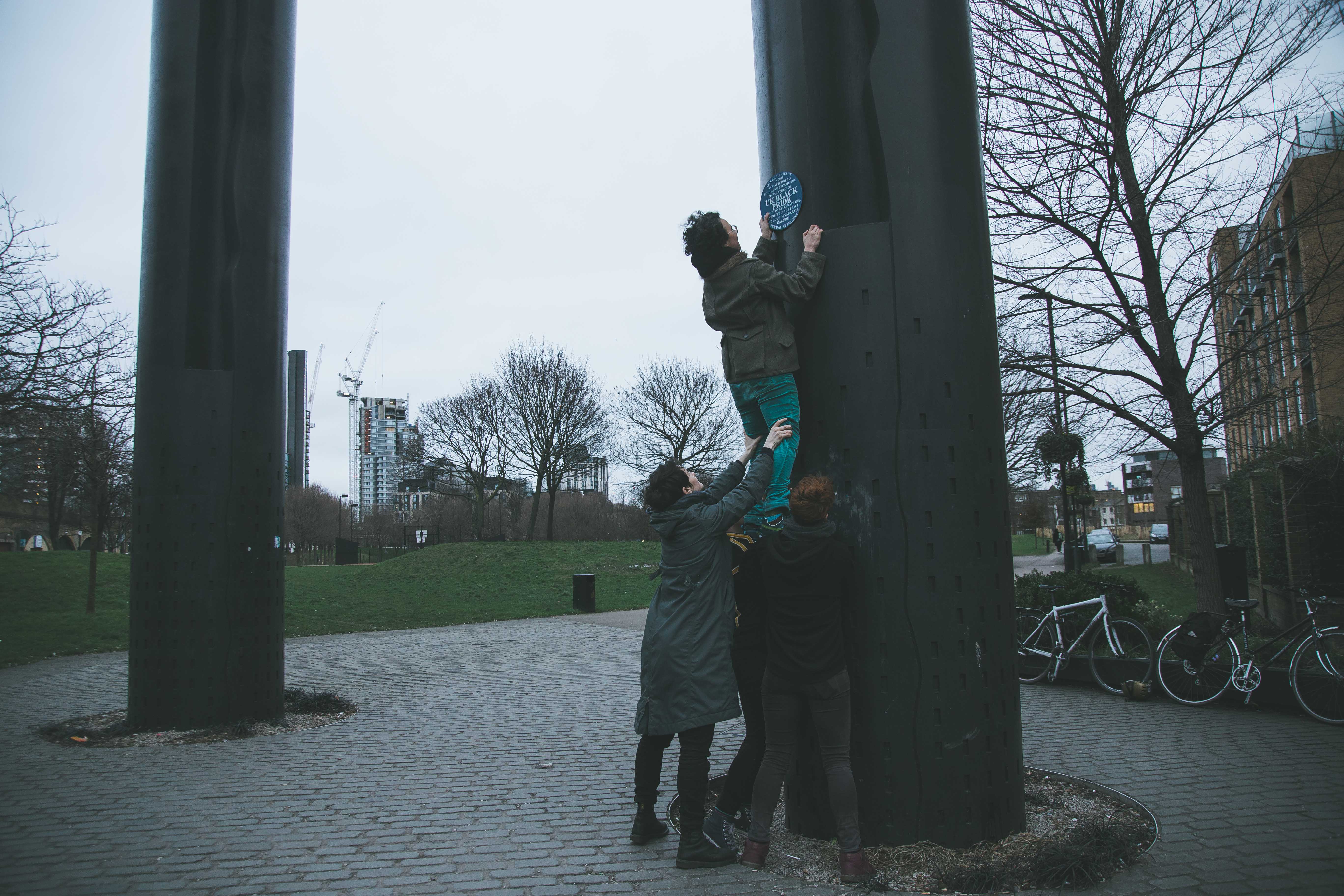 “The mainstream narrative is about the gay bar, and that’s so important,” Lucy says, commenting on London’s queer scene today. “But the Royal Vauxhall Tavern wouldn’t have any customers without places like the 121 Centre, an amazing 5-storey queer squat with a community café, or the London Lesbian and Gay Centre, which was funded by a much more socialist London authority in the 80s.” The 121 Centre closed in 1999. 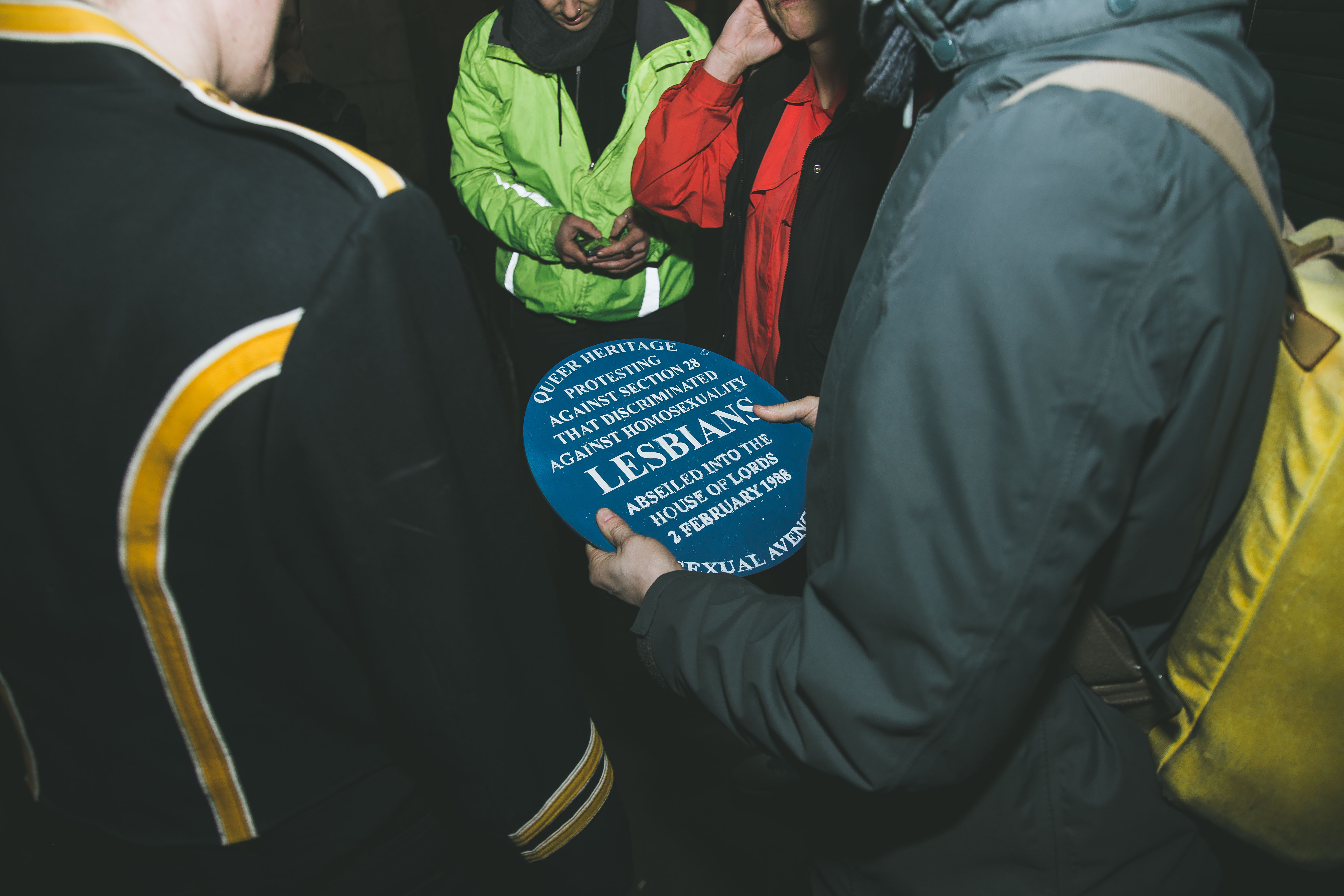 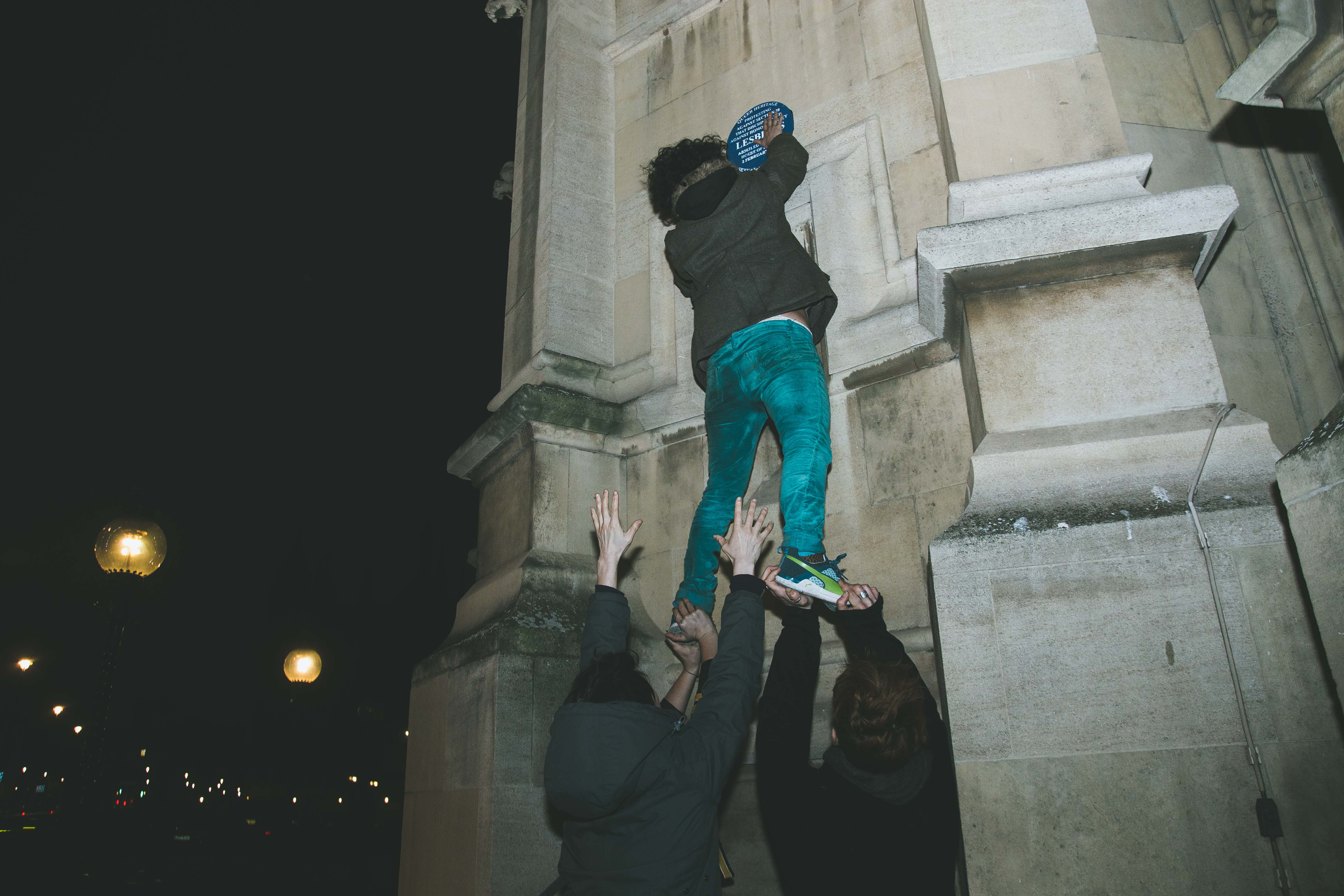 In a Soho back-alley, the flying squad practice their moves. Like a queer rugby pack at a line-out, they practice springing higher and higher up the brickwork. Several dry runs later and they’re ready to roll. Lucy is confident: “four lesbians on bikes can beat anyone in the world.”

You never notice how bright a London night is until you try to sneak through it undetected. Even now, in nominal darkness, it is all but impossible to move unnoticed by policemen or private security guards – or without passing floodlit luxury hotel developments. “Just what we need,” Avenger Dan Glass mutters disgustedly.

The Avengers are keen emphasise their campaign is not just about history: “It’s an escalation of community, DIY action, of people taking queer history and bringing to life on the streets,” Dan says.

It’s not hard to see why. One in four homeless youths identifies as LGBTQ*, and according to the Avengers one in three of London’s queer venues has closed in the last two years. Unlike Berlin, Los Angeles or New York, the city has no dedicated queer community space, while the UK’s main LGBTQ* domestic violence and mental health charities are both shutting down. 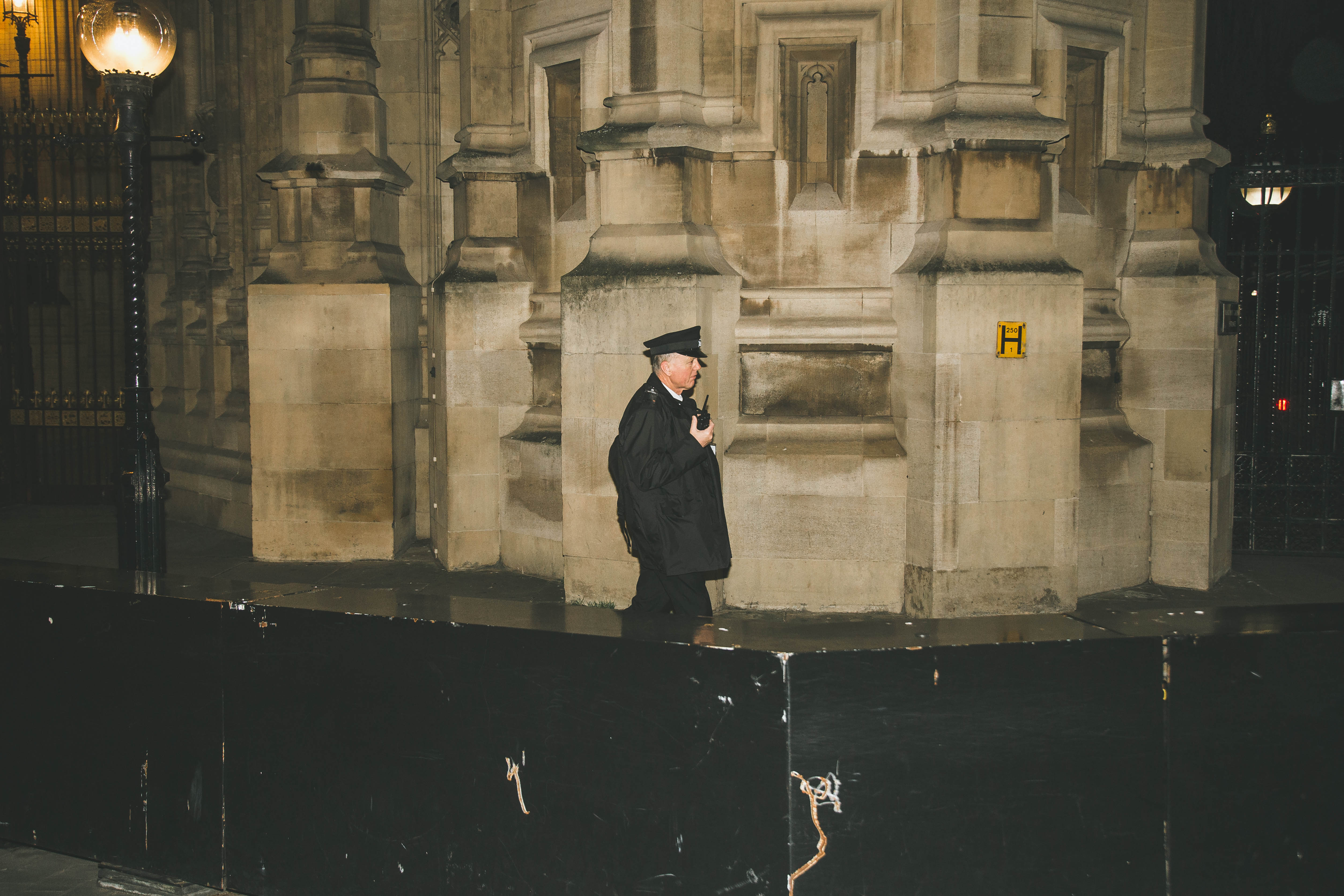 The Avengers demand publicly-funded queer spaces, a queer museum and an end to rising queer homelessness. Their own weekly meetings serve as an “insurgent queer space”, connecting up queer campaigners battling for rights in fields from abortion to AIDs and allowing young activists to learn from octogenarian veterans.

One of those four original lesbians from the House of Lords protest attended an Avengers meeting, she described buying washing line from a market and smuggling it into the galleries of the debate chamber wrapped round her waist, before rappelling down to join the peers. The plan nearly came unstuck when the rope dropped down around her ankles in the security queue. It’s these intergenerational connections the Avengers feel are so important, passing on the baton from one era to the next. 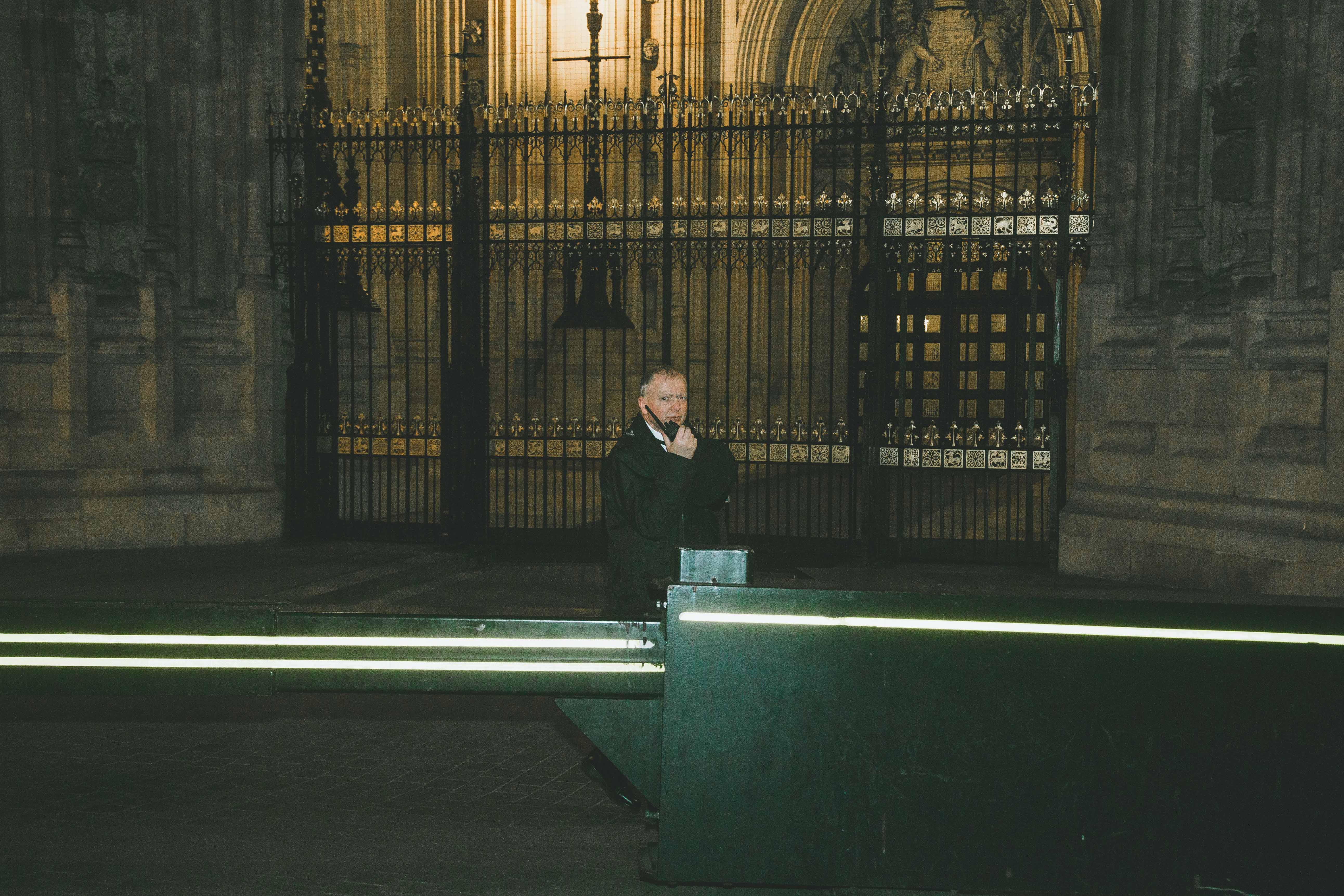 To prevent a similar disaster though, the Sexual Avengers have come prepared. On the night before the action, they gathered in a gay pub to hand-paint the plaques and talk tactics. One 70-year-old activist known as Miqx tells me he’d been involved in the gay scene “since before it was legal,” turning 20 in 1967 when the age of consent for gay men was grudgingly lowered to 21.

His case demonstrates the limits of legalisation, which has to be forced through by activists rather than bestowed benevolently from above. “They’re not our friends,” Dan continues. “People had to threaten the establishment, threaten power structures, challenge police brutality – this is the stuff the establishment is never going to tell you.”

Miqx describes his youth as a hippy and his activism with the Gay Liberation Front in the 1970s, “being visibly queer in really right-wing, fascist pubs – we could only stay for an hour before things got really ugly”. He says the Sexual Avengers are the first group in years to “revive that countercultural feeling about the level of excitement and impact.” 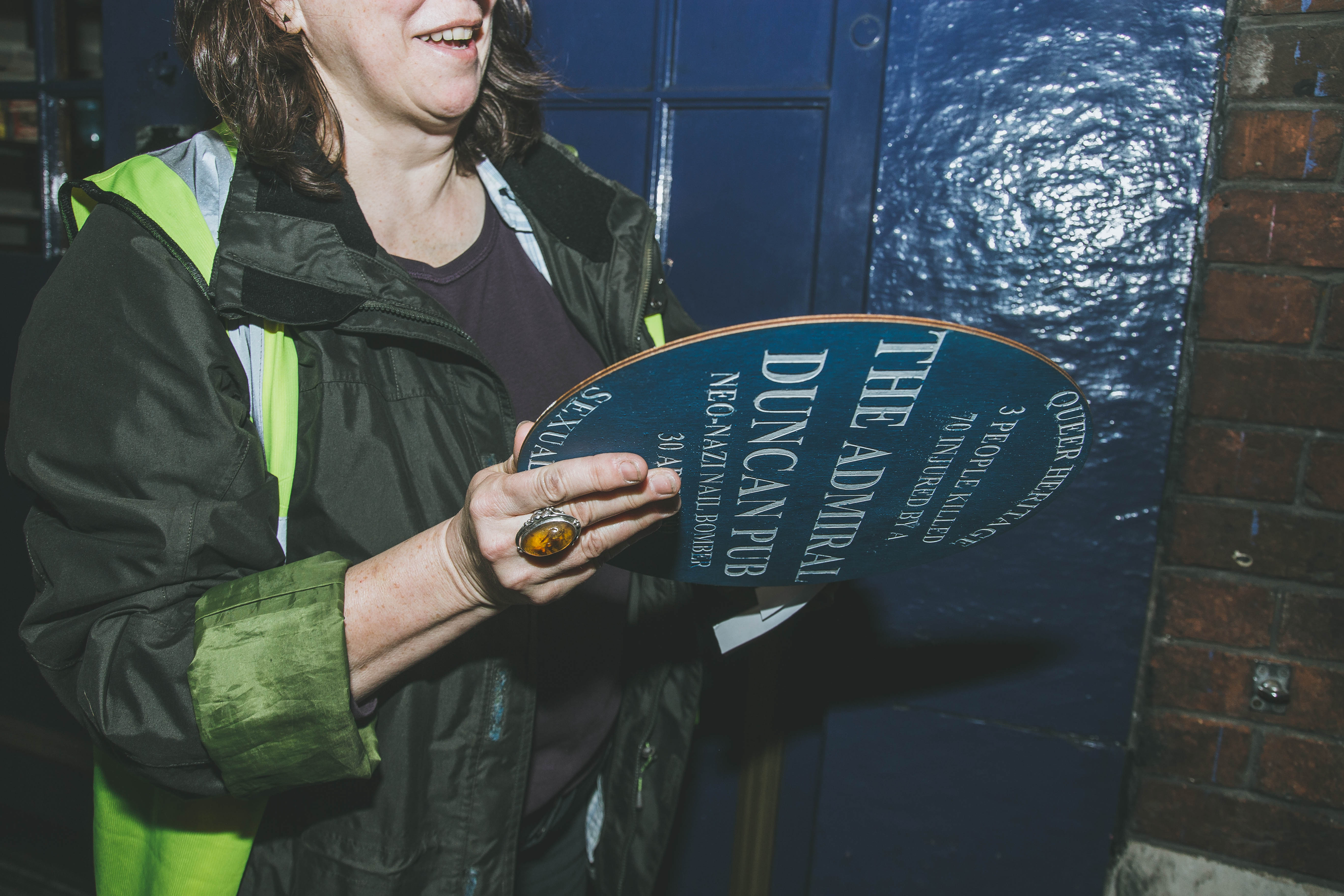 That excitement is mingled with apprehension. As the Avengers make their next approach, the gun-toting policemen outside Downing Street are a reminder that no matter how many Corporate Straight Ally awards the army collects and no matter how many cops go viral dancing at Pride, the UK’s security services remain homophobic and violent.

But the strike goes off without a hitch. A diminutive Avenger called Ariana flies up the wall, slapping the plaque into place. Baffled security guards are left blinking dumbly at the plaque, yards out of their reach on the side of the building. The Sexual Avengers have made another mark. 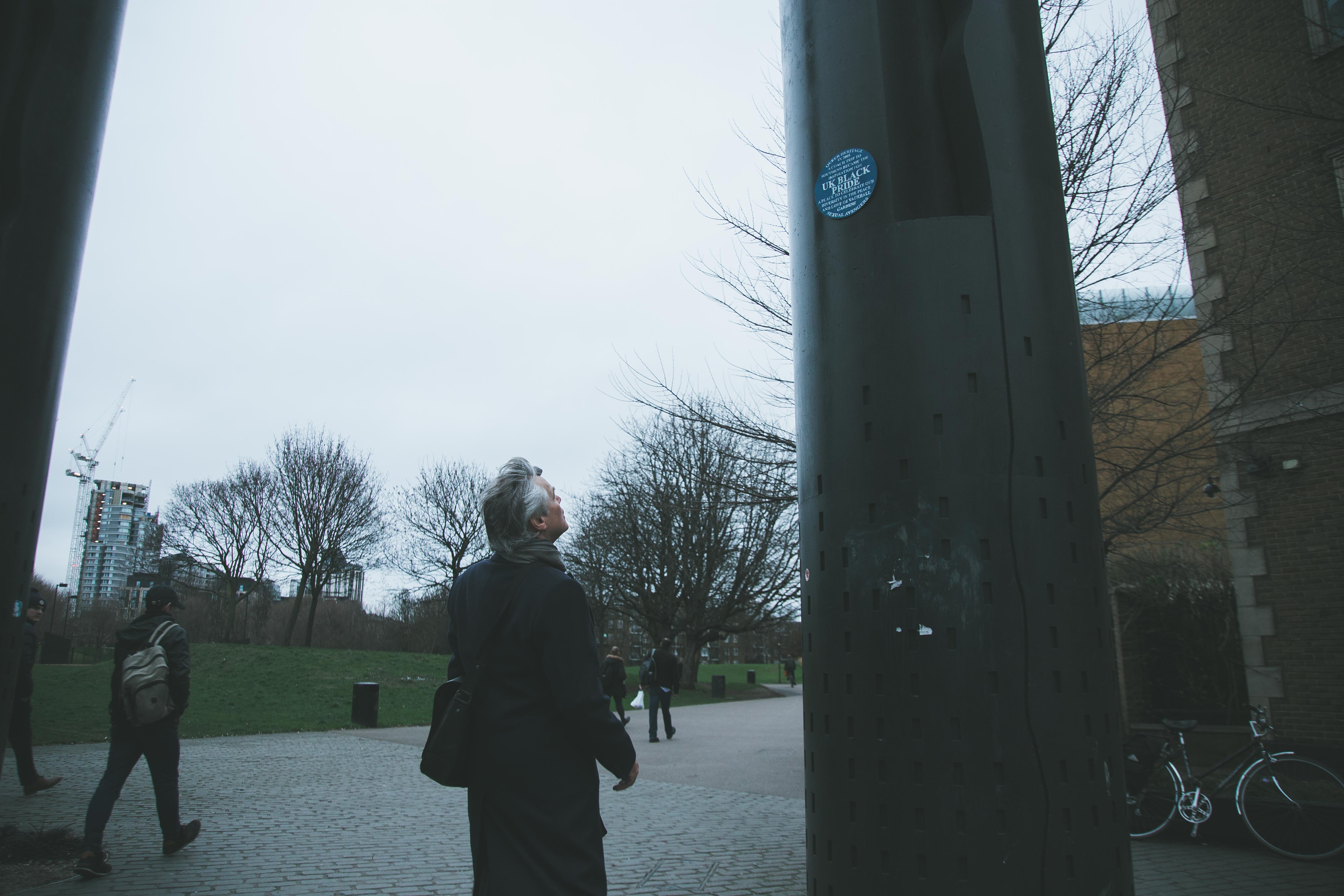 As the guards radio for orders the team moves on, pedalling furiously across the city to tag more targets. Outside the Admiral Duncan, runners are dispatched to collect a sound-system for a second action later in the same day, taking over the Greater London Authority’s Scoop amphitheatre for a ‘queer show-and-tell’.

A panting Ariana says: “it’s about visibility, creating a rupture in an impenetrable powerhouse. It felt awesome standing on the shoulders of giants – and of my friends.”

The Sexual Avengers meet on Wednesday from 18.30 to 20.30 at Lime Wharf in East London. Find out how to get involved.

Linkedin
RELATED ARTICLES
OTHER ARTICLES
AI companies that develop image-generators using copyrighted artwork from the internet are coming under fire from artists who say that it amounts to theft.
Tristan O’Neill’s shots of dancers caught in moments of reverie at the height of rave’s golden age are a testament to the UK’s legendary club culture.
A new film from Berghaus traces the story of Adam Raja, who left behind a turbulent upbringing to discover the healing power of climbing.
Activists and campaigners are fighting back against new laws that would seriously undermine the ability to take industrial action, calling it an attack on fundamental workers' rights.
Photographer Becky Tyrell went down to the fading banger and stock raceway to meet a community desperate to keep it alive.
As she gears up for the release of her first book, the 24-year-old climate activist talks standing up to authority and building a more inclusive movement.