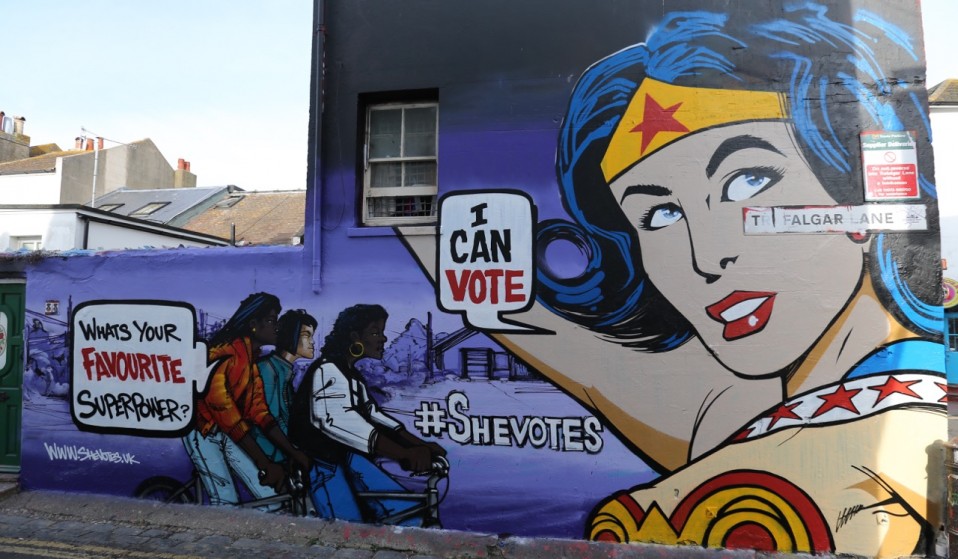 #SHEvotes is a campaign calling for young women's voices to be heard in the current political landscape, putting positivity back into voting.

#SHEvotes is a campaign calling for young women's voices to be heard in the current political landscape, looking to put power and positivity back into the act of taking to the ballots.

It doesn’t take an expert to notice that currently, political decisions all over the world are being made with a certain generational disconnect. The old seem to have been mass-voting against the young: during Brexit, 75% of 18-24 year olds voted to remain in the EU, standing against a 61% majority of leave voters aged over 65. A similar gap was seen during the American presidential campaign, and, as the UK snap election draws closer, we seem set to see another battle of the ages taking place, this time deciding between a Conservative or Labour government.

Because of that, this (short) election cycle brought the discussion of youth turnout back to the table. Over a million 18-24 year olds have registered to vote since this general election was called, with nearly 2/3 of those said to be “certain to vote”. And since most young people are showing affinity towards Labour, the Conservative landslide starts looking not so certain.

Both the parties and the people know that the young vote could be decisive. During his campaign, Jeremy Corbyn appeared in the cover of Kerrang! and the NME, opened a Libertines concert and was endorsed by grime icons, such as JME and Novelist. The Libdem manifesto talked directly to young people.

However, one youth demographic still remains entirely untapped by all parties: Young women.

Although they make up 52% of the electorate, women from ages 18-34 are considered the least likely group to vote, as well as the most undecided one. As such, their voices are the least heard – and that’s what the #SHEvotes campaign is trying to change.

“I vote because I’m not an old male banker and so politics affects me quite a bit.” @BillieJDPorter is calling for young women to VOTE in the General Election this Thursday. #SHEvotes #GE2017 #generalelection #voting

A non-partisan campaign run by four friends, #SHEvotes wants to encourage women of all political inclinations to turn up at this election and remind them that their opinions are important and can in fact change the future of the country.

“We’re trying to make a movement that is more welcoming, and that we hope will appeal to a broader audience of young women. They are the people that we need to get back to the political arena, not just for this election, but as a long-term change,” explains Fanny Calder, one of the organisers behind #SHEvotes.

The group of friends has chosen to keep this movement neutral, as a way of drawing women from all backgrounds to the voting booth. After all, the purpose of #SHEvotes is to increase representation and make these voices, so often ignored and silenced, heard – regardless of who they are calling for.

“We really want to reframe it [political disengagement] and turn it on its head. We want to say that the fact that young women haven’t made a choice, that they’re not expected to vote, means that they absolutely have a massive impact in the turn out of this election.”

“Most of the polls are factoring in the fact that most young women won’t turn up, so if they do turn up, things are going to change. That’s the real excitement behind this cause. Women are really more powerful than they think they are, if they turn up and vote.”

Fanny also highlights the importance of confidence in your vote as a young woman. If you are uncertain on who to vote for, you can use the party-neutral websites Who Should You Vote For and I Side With, find out which parties’ policies align most with your own beliefs, and pass it on to your friends.

Using creative expression as a call to arms and a way to spread positivity in a polarised landscape, #SHEvotes will be taking to the streets and the internet in the few remaining days until the election, in the hopes you, as a young woman, will take to the ballots on the 8th and make your voice heard.

You can find out more about #SHEvotes and ways to make sure you and your friends cast your votes through their website. You can also help them spread the message by supporting this campaign.

Linkedin
RELATED ARTICLES
OTHER ARTICLES
Photographer Sean Maung reflects on documenting a small town in Pennsylvania afflicted by high levels of unemployment, poverty, violence, crime, and addiction.
Social prescribing connects people with non-medical support to improve their health and wellbeing – but some experts worry it’s just a stick plaster solution.
At his West Bank restaurant, Fadi Kattan established himself as the voice of modern Palestinian cuisine. Now, he’s bringing his innovative, bold flavours to the UK’s capital.
Tristan O’Neill’s shots of dancers caught in moments of reverie at the height of rave’s golden age are a testament to the UK’s legendary club culture.
Following the release of his debut single, Deyaz talks battling addiction, dealing with his struggles through music, and building a budding music career from his living room.
Activists and campaigners are fighting back against new laws that would seriously undermine the ability to take industrial action, calling it an attack on fundamental workers' rights.