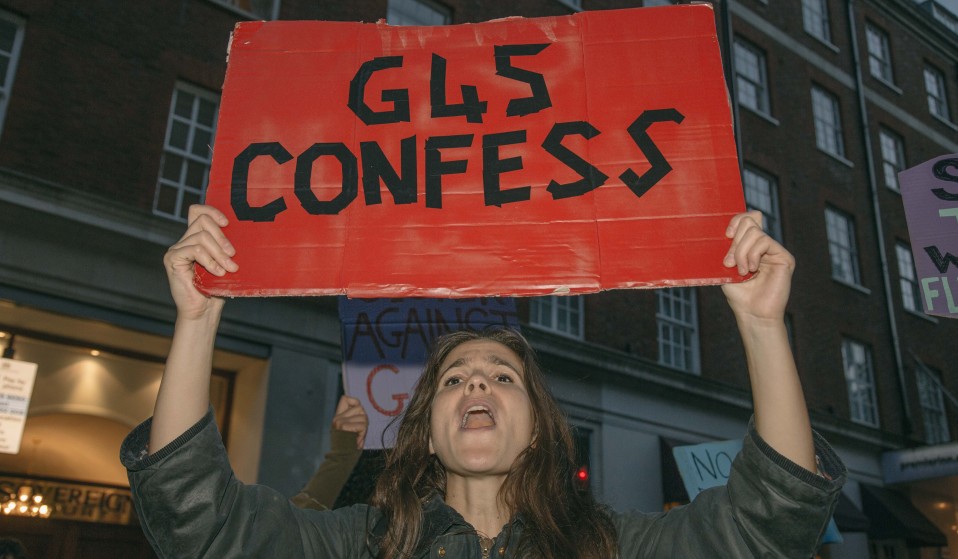 The private and public spheres are merging, an ideologically driven move to transfer power and profit into corporate hands. But there's a human cost to allowing private companies like G4S to run services that are relied on by some of our most vulnerable citizens.

The private and public spheres are merging, an ideologically driven move to transfer power and profit into corporate hands. The UK is now the second largest outsourcing market in the world. But there's a human cost to allowing private companies like G4S to run services that are relied on by some of our most vulnerable citizens.

Yesterday we marched to G4S’s head office and held a sit-in outside. Let us explain why.

Sisters Uncut have noticed an alarming trend in the way the British government is choosing to handle services for survivors of violence. When women suffer violence, private companies profit directly. Contracts for vital domestic and sexual violence services for survivors are increasingly being taken out of the hands of experts and handed to the same companies who police borders and run prisons and detention centres.

Women fleeing violent men are now being forced to seek support from violent men looking to make a profit (from the violence they play a significant part in perpetuating). 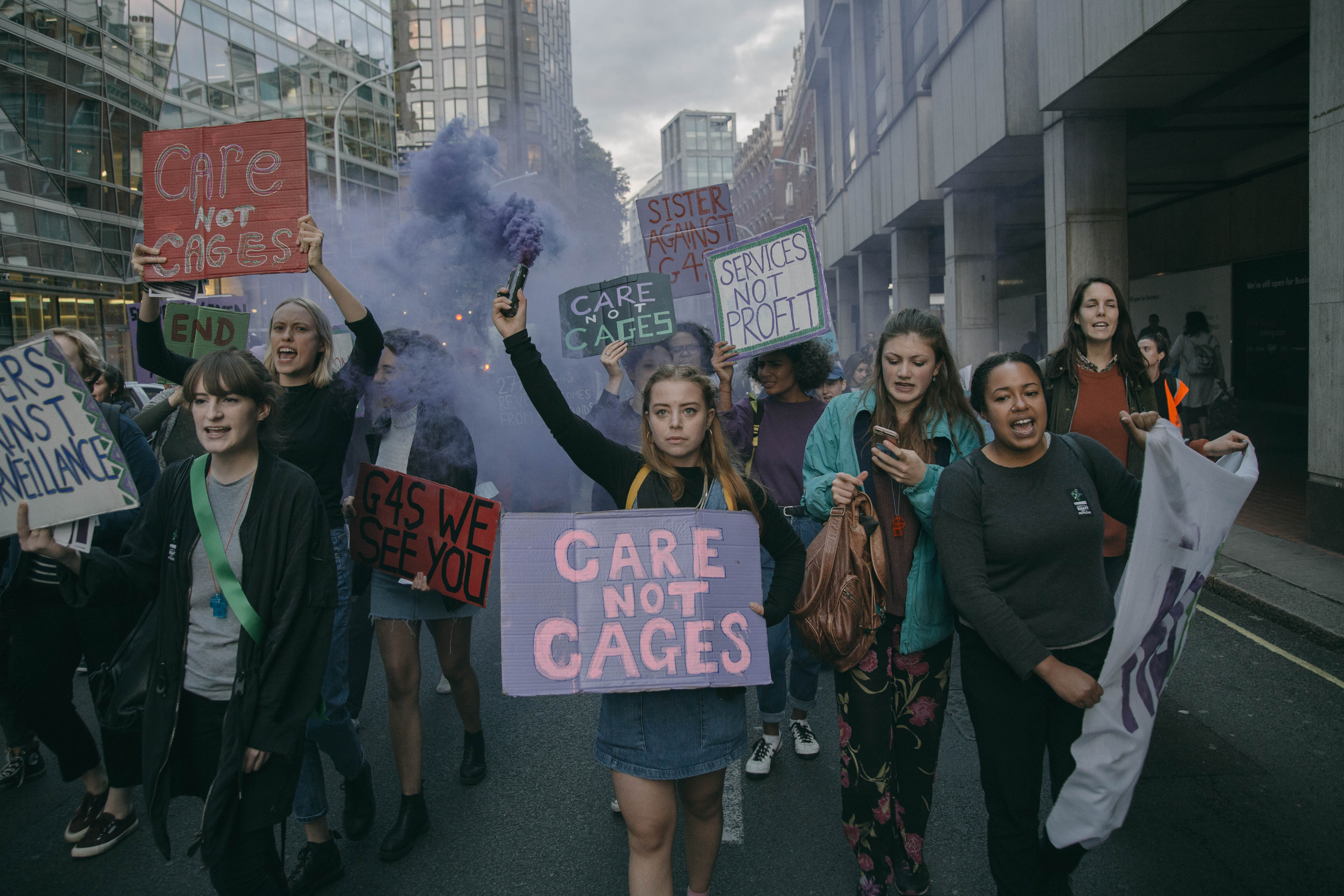 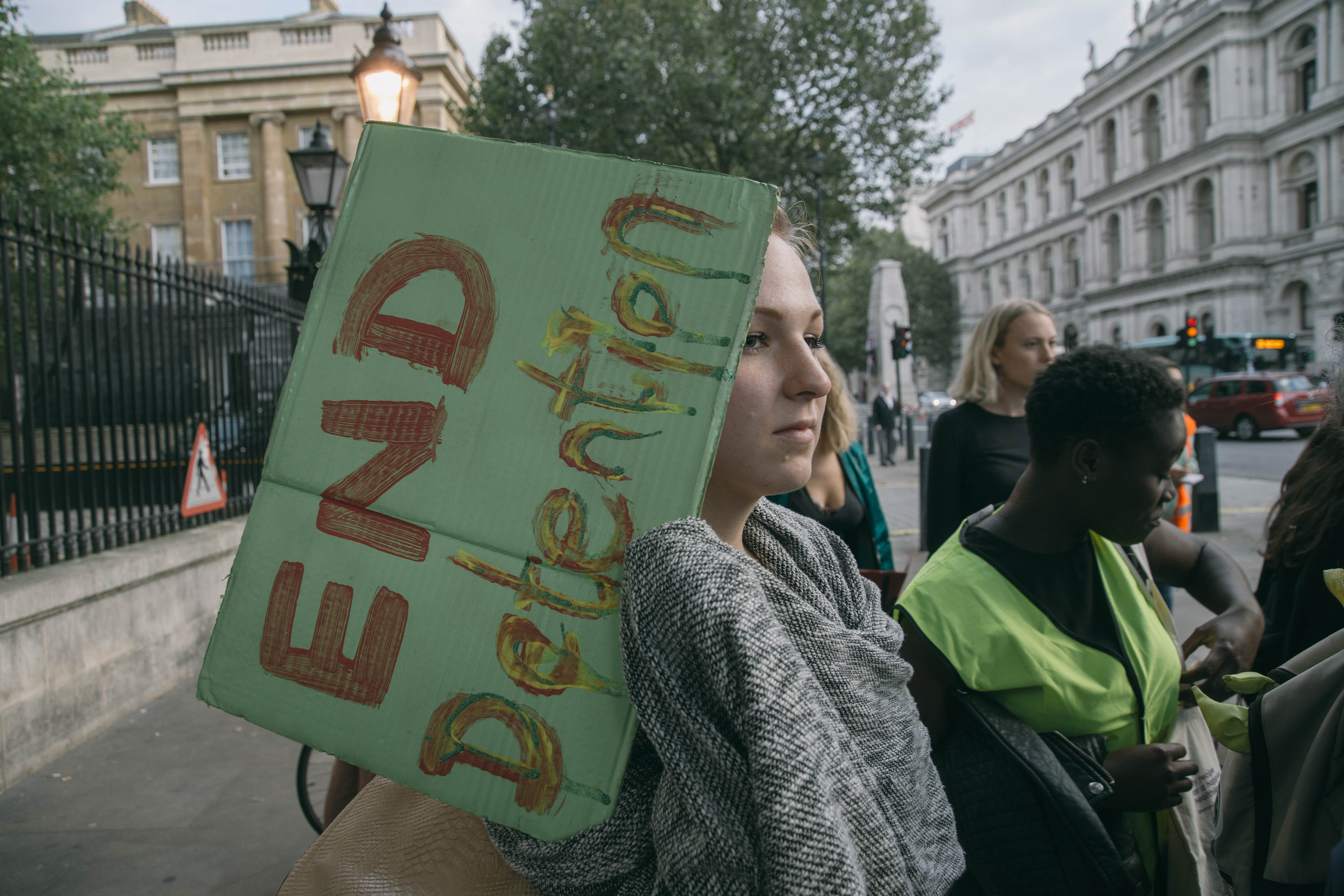 Migrant women and non-binary people already face higher levels of violence and abuse and the government’s violent border regime makes leaving abusive relationships – statistically the moment at which survivors are most at risk – even harder. In 2014 alone 389 migrant women fleeing domestic violence who had no recourse to public funds were turned away from refuges – we don’t know what happened to them.

Plus, specialist survivor services are being forced to shut down – between 2010 and 2014, 32 specialist services shut their doors for good – or bought out by housing associations or private companies that can undercut their higher running costs. This makes it harder for the migrant women and non-binary people who can access state support to do so.

Survivors without status, fleeing abuse in their birth country or in the UK, often face insurmountable barriers in accessing the most vital support. These barriers are not inherent, they are the result of ideological decisions: ruthless service closures and increasingly violent borders.

The tentacles of border control are spreading into all corners of society. When you’re fighting against a system so total – one in which everyone, from teachers to counsellors, is expected to be a cop or a border enforcement officer – it can be difficult to pick a specific target. From the Prevent Duty to border raids, to the fact that many migrants cannot access basic support as they have no recourse to public funds, we face a system that is pitted against and deeply violent towards migrant sisters. 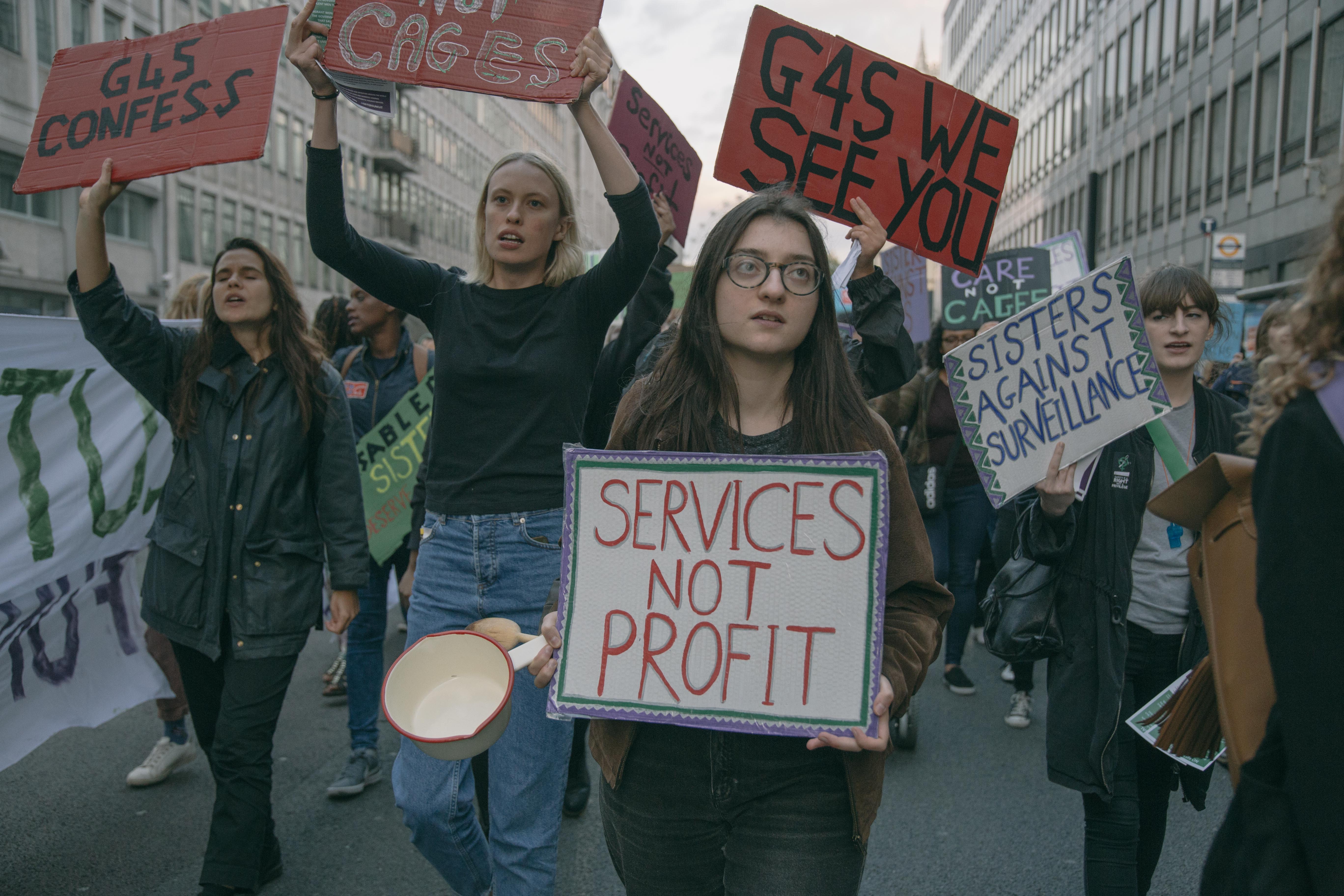 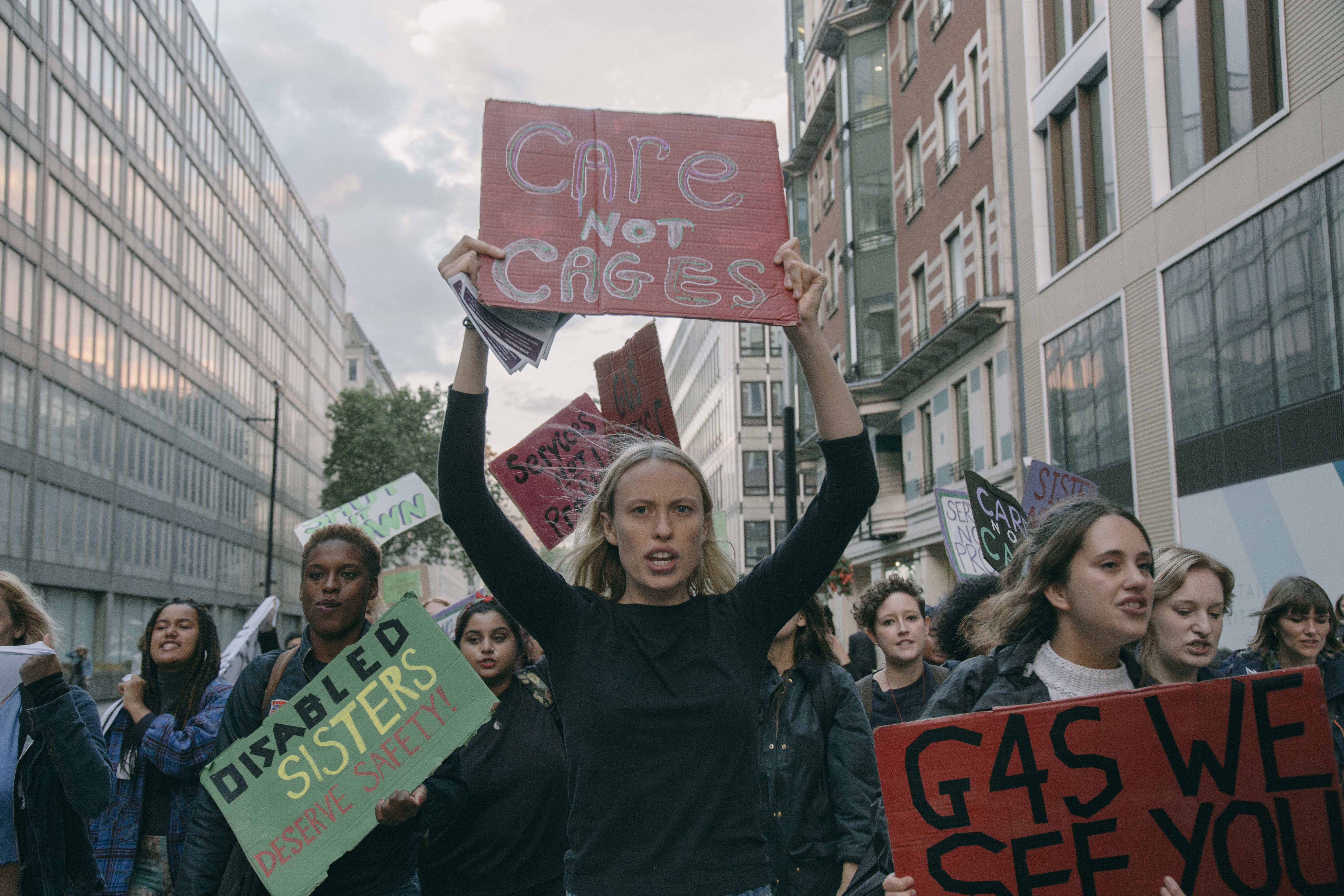 One organisation however quickly became an obvious target. It is a single thread holding together private security firms, austerity and the marketisation of public services, and the racism and sexism inherent to detention and borders. This organisation is G4S.

The UK government is outsourcing violence: paying millions to private companies to run its prisons and detention centres. As local authorities have their budgets slashed and put their contracts for vital services like domestic violence refuges out to tender they end up going to the lowest bidder – increasingly this is firms like G4S.

G4S have just been awarded a contract to run two sexual assault referral centres in the West Midlands.  In two weeks, G4S will also be running the Government’s Equality Advisory and Support helpline, perhaps even fielding answers to any complaints it receives about the services it provides. There may be a few: in just one year 773 complaints were made to G4S by detainees, including 48 of assault. 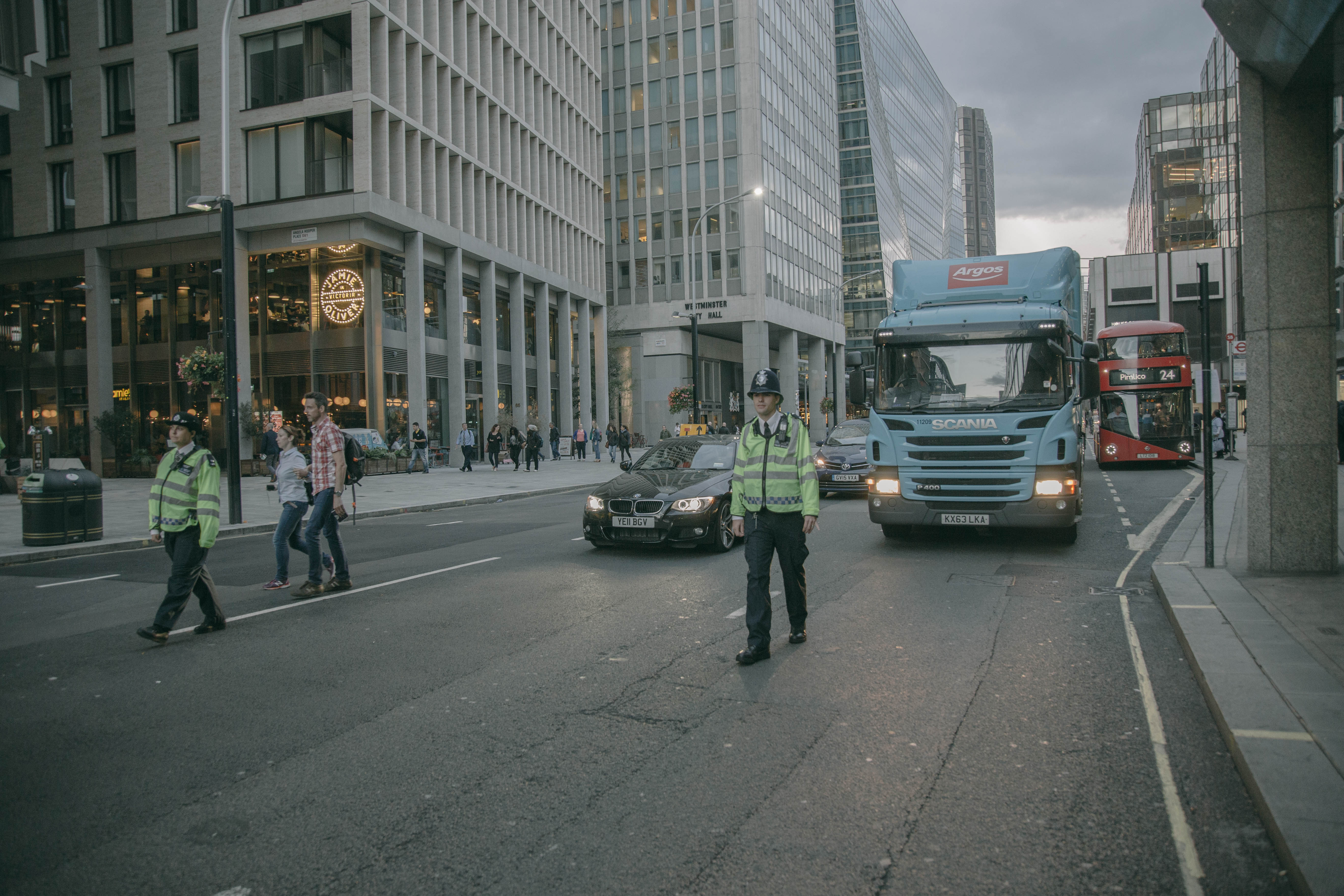 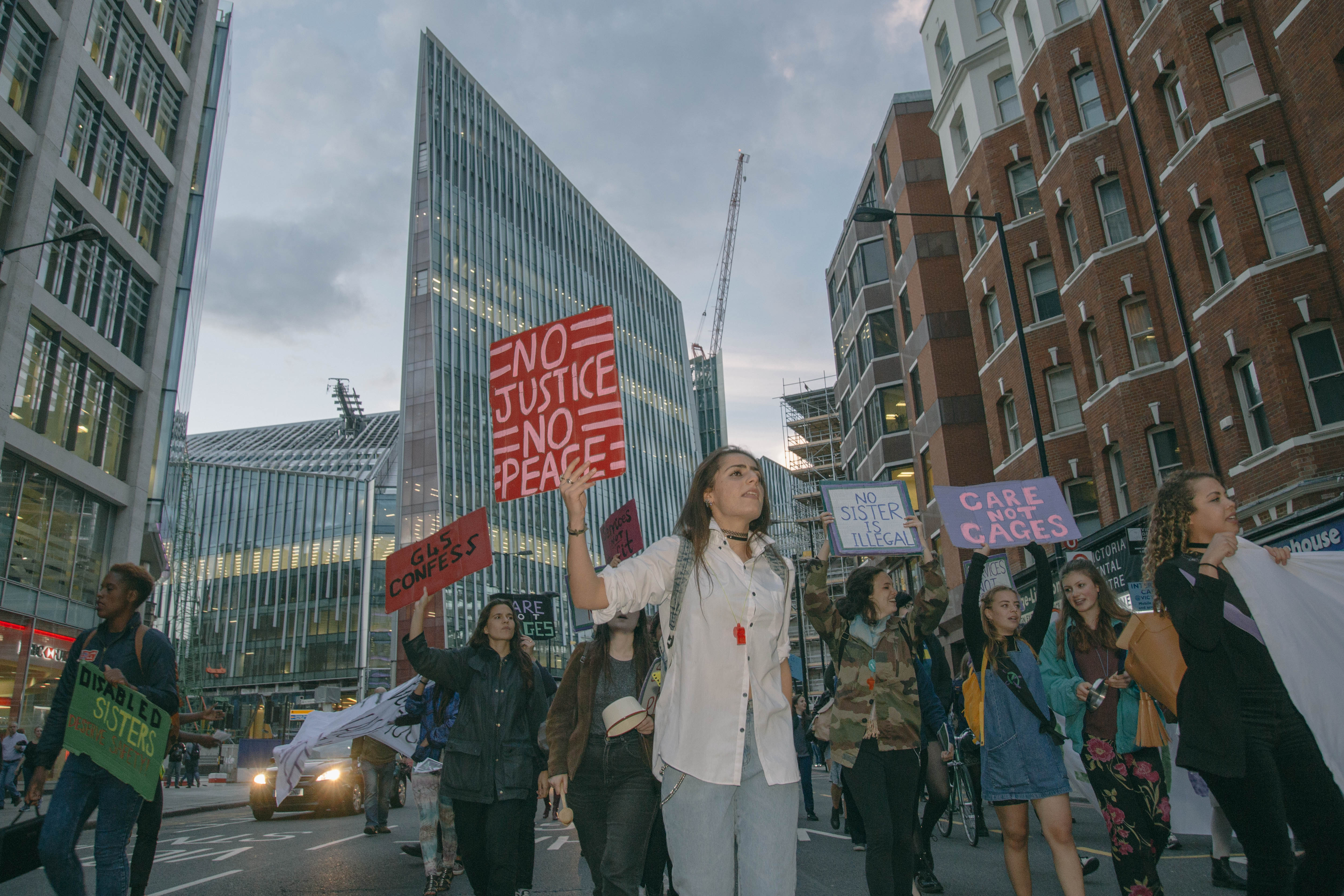 When contracts for domestic violence services are taken over by organisations with a track record of multiple accusations of mistreatment and abuse, survivors’ lives are surely put in further danger.

Migrant survivors of gendered violence languish in privately-run detention centres. Many migrants are forced back to their birth countries where they are likely to face violence. And it’s private security companies like G4S who are paid to enable deportations.

G4S has have a history of allegations of racist and sexist abuse. In 2010 Jimmy Mubenga died while being forcibly deported by G4S. After his death racist texts were found on the phones of the staff members who had used excessive force.  They’ve also been accused of ‘racist’ and ‘degrading’ abuse against children in a youth prison.

This is why yesterday we marched from Parliament to G4S’s London offices, blocking the roads as we went. Why we sat down outside their HQ and read out the names of all our sisters who have died in prison or detention. Why care can never be provided while our sisters are caged. 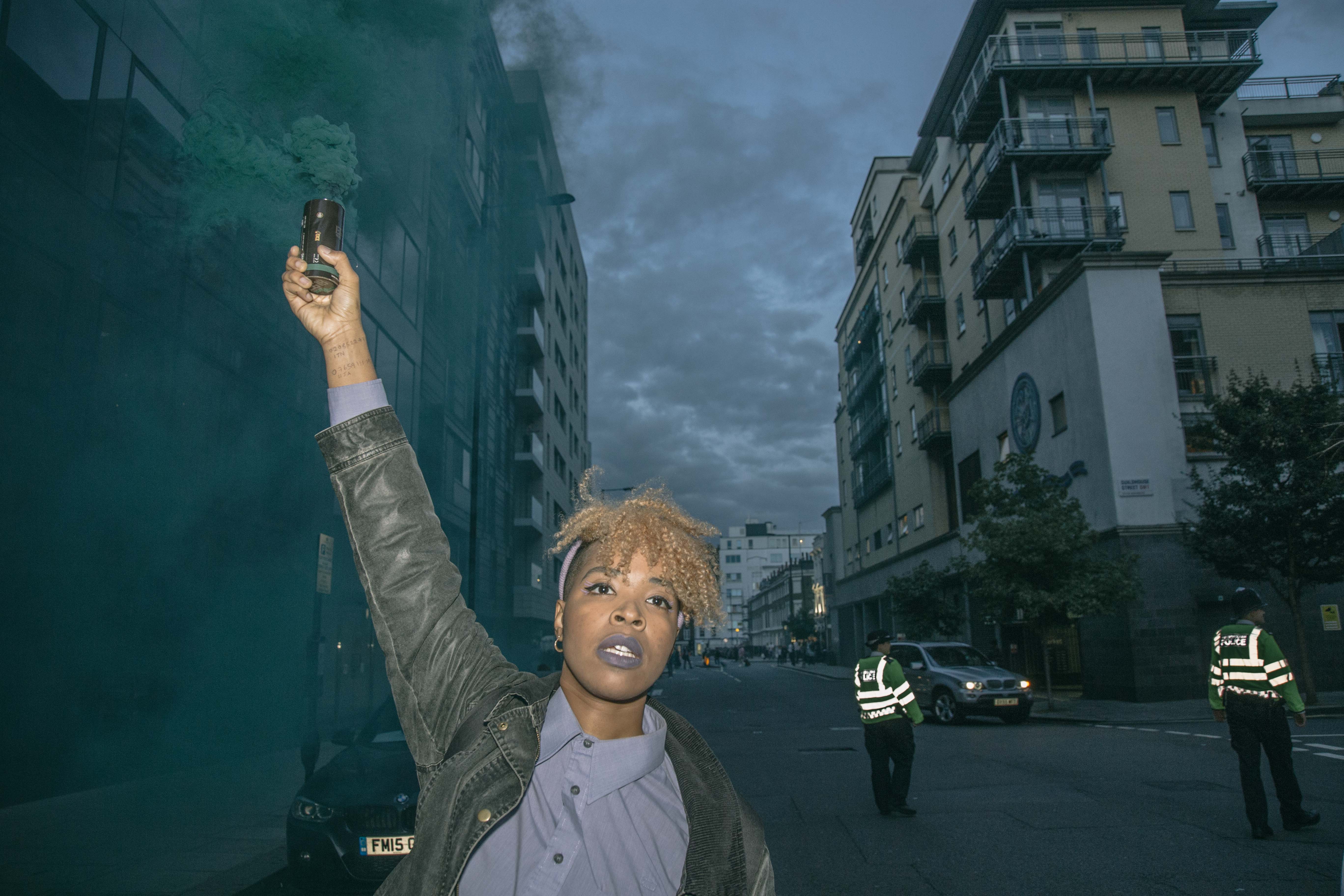 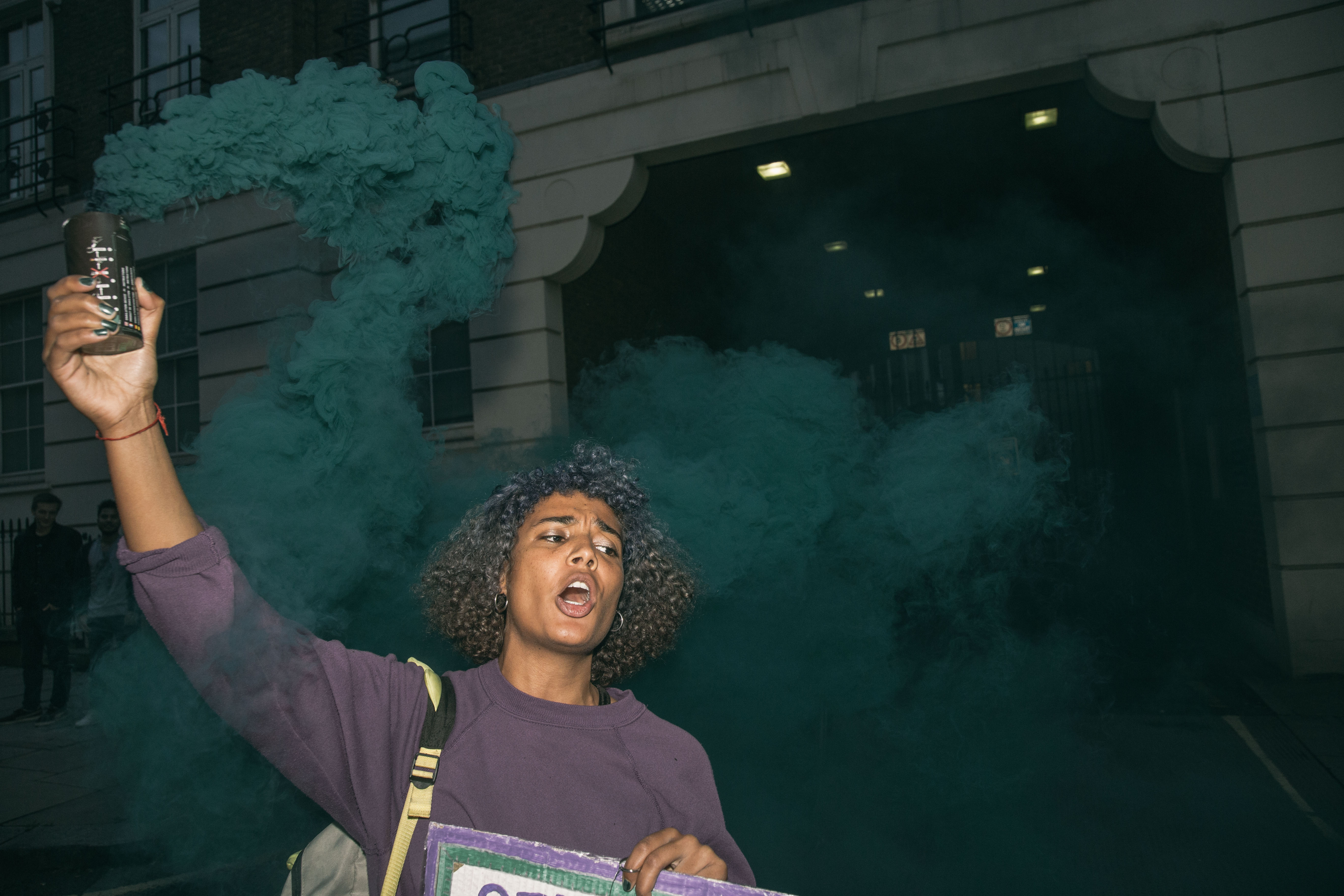 Given their track record of multiple allegations of racism, sexism and violence, we believe it’s completely inappropriate for security giant G4S to be providing services for survivors of domestic violence. Specialist women’s support services were built on decades of love and care; all of that has been ripped away now and replaced by a faceless security firm who specialise in deportations.

We believe that women’s lives are worth more than pieces of paper, that national status should not determine the level of life-saving support you receive, and that violence is something to be prevented rather than something to profit from. G4S, we see you. 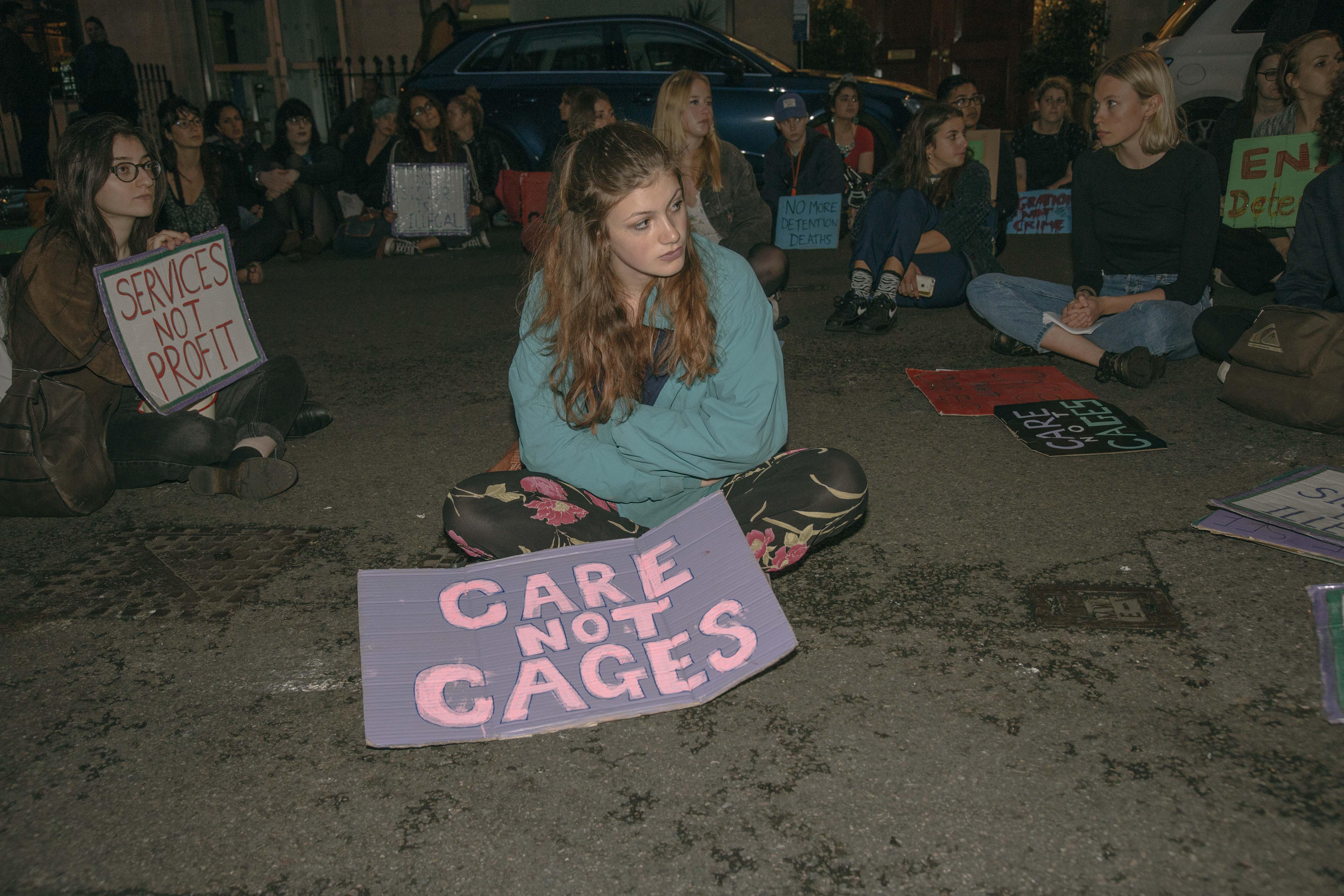 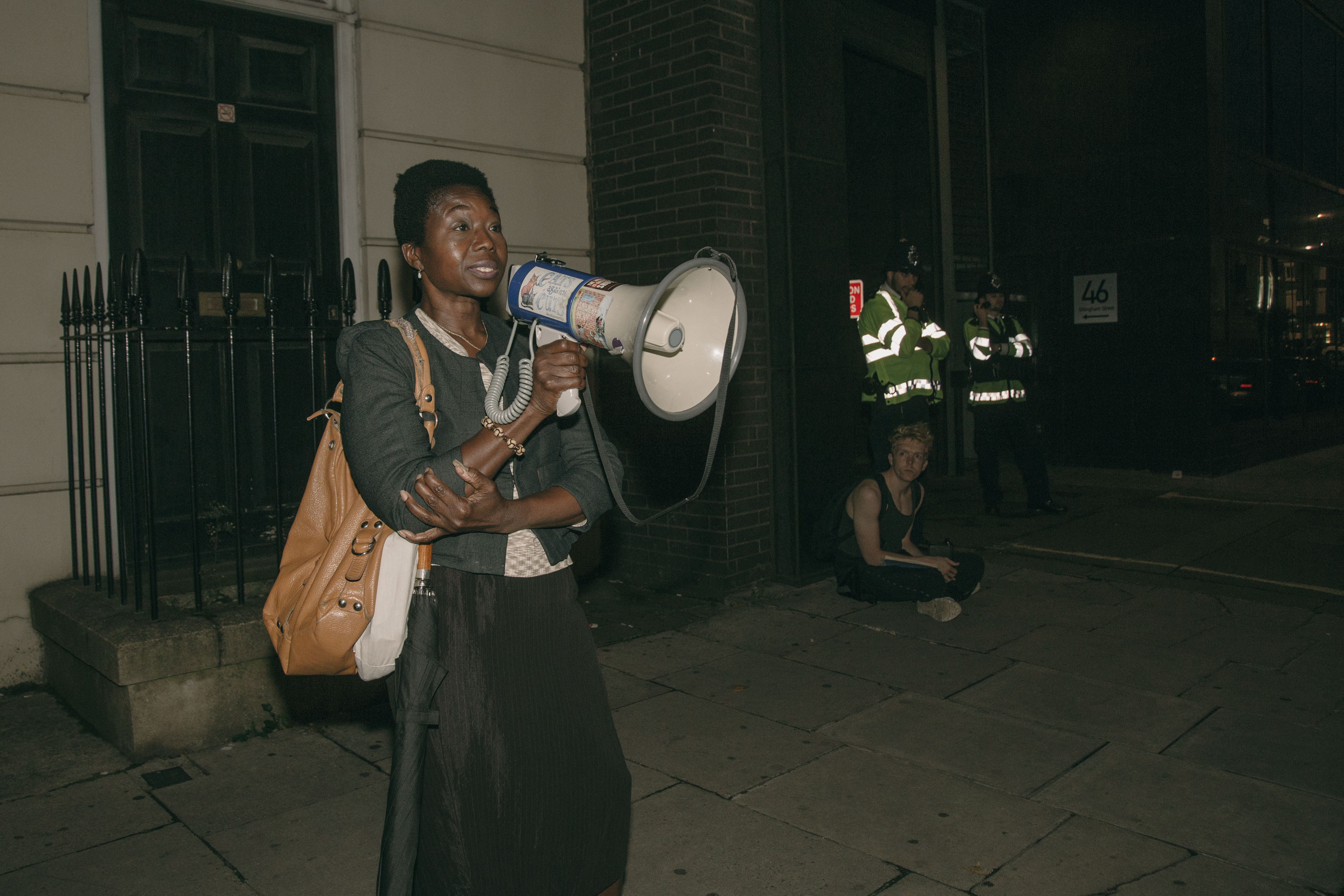 Sisters Uncut are famous for our public stunts and actions – from dying the fountains in Trafalgar Square red, to jumping on to the red carpet, and barricading the entrance to the Treasury. With North London Sisters’ new focus on supporting migrant women and non-binary people, we are organising in our communities for access to safe housing, against raids and deportations, for and specialist support, care not coercion or control.

We’re demanding that the Government invest public money in support services: it goes without saying that they should not be giving services to private security contractors with a record of abuse.

Linkedin
RELATED ARTICLES
OTHER ARTICLES
A new podcast is opening up the conversation between trans women and trans amorous men in the hope of building coalitions.
Tristan O’Neill’s shots of dancers caught in moments of reverie at the height of rave’s golden age are a testament to the UK’s legendary club culture.
After fleeing the war in Ukraine, people are finding it impossible to secure affordable and decent housing in the UK.
A new film from Berghaus traces the story of Adam Raja, who left behind a turbulent upbringing to discover the healing power of climbing.
After building his reputation covering the US civil rights movement in the 1960s, the photographer went on to produce some of the most enduring images of the past century.
Photographer Becky Tyrell went down to the fading banger and stock raceway to meet a community desperate to keep it alive.