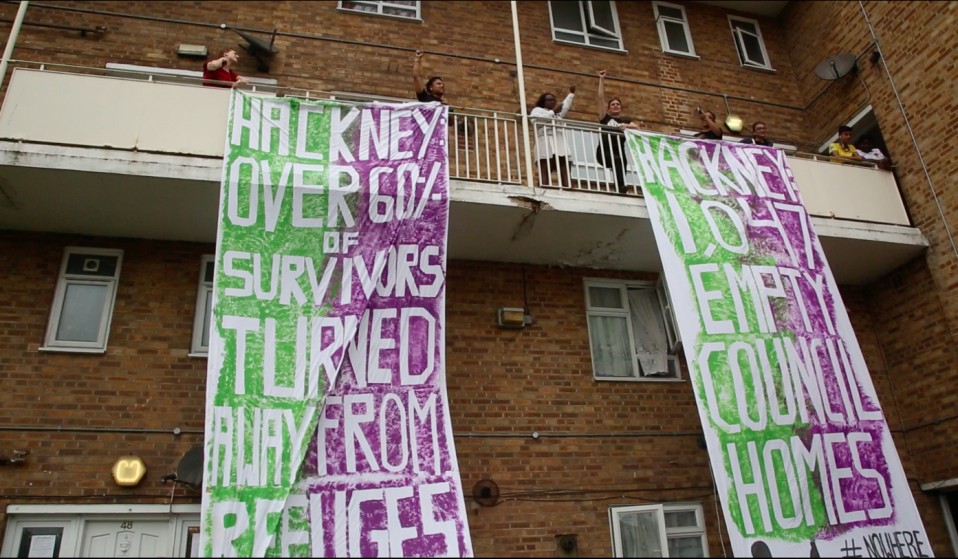 Campaigners from feminist direct action group Sisters Uncut took to the streets of London today, before occupying one of Hackney's 1047 empty council homes to highlight the need for places of refuge for survivors of domestic violence. They say they won't leave until their demands are met.

Campaigners from feminist direct action group Sisters Uncut took to the streets of London today, before occupying one of Hackney's 1047 empty council homes to highlight the need for places of refuge for survivors of domestic violence. They say they won't leave until their demands are met.

The streets of Hackney, East London are always crowded on a sunny Saturday afternoon, but outside Hackney Town Hall a crowd was gathering. Activists and campaigners from feminist direct action group Sisters Uncut were taking to the streets of London again, ramping up their campaign to demand better services for survivors of domestic violence in the capital and beyond.

After a series of rallying speeches, and time taken to remember those who have died at the hands of domestic violence, the group set off, noisily snaking their way through the busy streets. “We have a right to homes free from violence”, shouted one impassioned protestor. Quickly the group made their way towards an empty council home, one of 1047 in the London borough. Moments later they were inside, occupying the building on the Marian Court, speedily transforming the place into a community centre. The council currently plans on demolishing the block of residences.

Local residents have since been coming out to support the group. Domestic violence is a significant cause of homelessness in London – it is cited as the direct reason for presenting as homeless by 1 in 8 applicants to boroughs. A scarcity of secure, social housing and deep cuts to refuge funding means survivors are regularly turned away or housed in unsafe temporary accommodation or hostels.

“Women approaching the local authority for housing are almost always turned away, unless they have children”, explains Léan McNulty, a domestic violence support worker. “Councils across London place women and children in shared mixed hostels for years on end, palm them off to unaffordable and insecure private sector or place them out of London. The options presented to women fleeing domestic violence are insecure, disruptive and frightening.”

The housing crisis is national, but Hackney is one of the worst affected London boroughs. Domestic violence charity Hackney Refuge is forced to turn away 60% of women seeking help.

Sisters Uncut told Huck that Hackney will lose 915 social homes through its estate regeneration plans, and the new-builds replacing them are too expensive for the majority of residents.

Sisters Uncut hove vowed to continue to occupy the property until Hackney council meet their demands: to fill their empty homes, to stop using hostels for survivors of domestic violence, and to protect council housing in the area. The activists are also calling on the local authority to refuse to implement the Housing Act.

Linkedin
RELATED ARTICLES
OTHER ARTICLES
Planet Ardbeg is a 40-page sci-fi anthology created by three cutting-edge artists.
Shaunak Sen discusses his documentary chronicling an ad hoc hospital’s efforts to protect the city’s birds of prey.
With the singer’s tour in full swing, we sat down the musical production company who made the electrifying show possible.
Following the release of their third album, the duo talk collaboration, family and connecting with the dead.
After voting to strike across England, prison teachers explain why they’ve been pushed to a breaking point.
The photographer reflects on a decade which saw the rise of MTV and the flourishing of new genres.