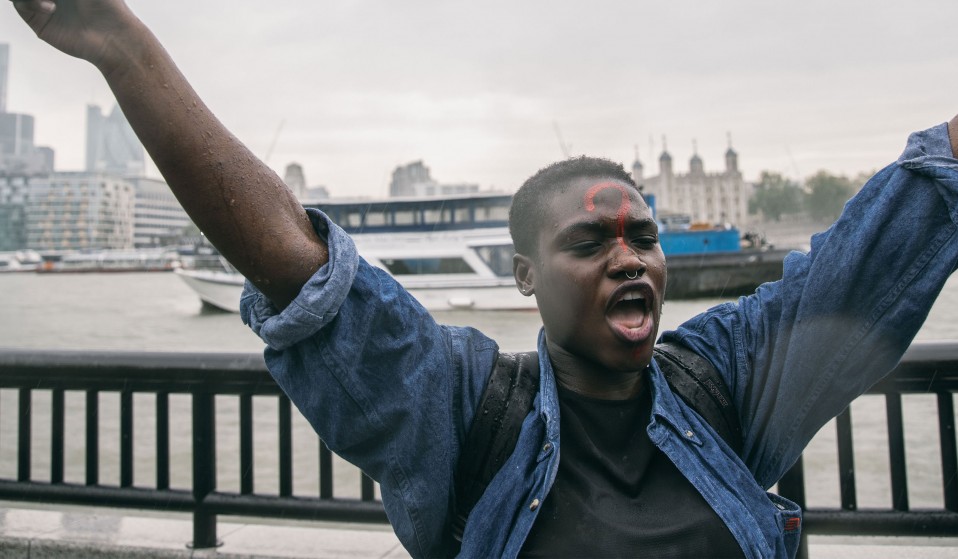 London has only just elected a new Mayor, but Sisters Uncut - London's radical woman and non-binary led campaign group - are already calling for urgent action on domestic violence. There's a crisis: two thirds of women in the English capital are turned away from refuges due to a lack of space and resources, and Sadiq Khan needs to take action. 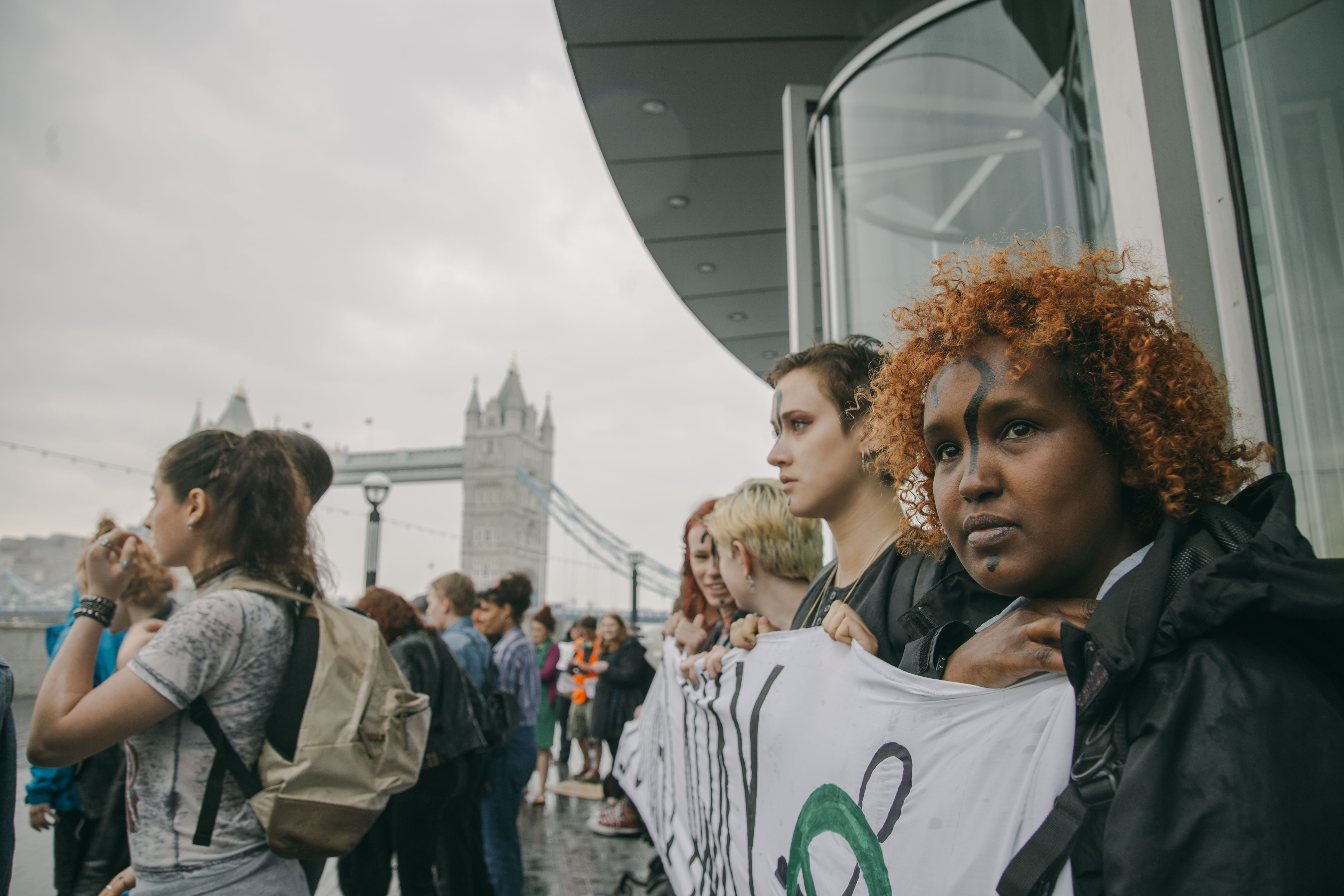 These were the words of Sisters Uncut – a radical, woman and non-binary led direct action group, in central London yesterday afternoon. Around thirty campaigners wasted no time in taking to the streets to ensure that their message was heard by London’s most powerful politician, Sadiq Khan, last week elected Mayor of London. 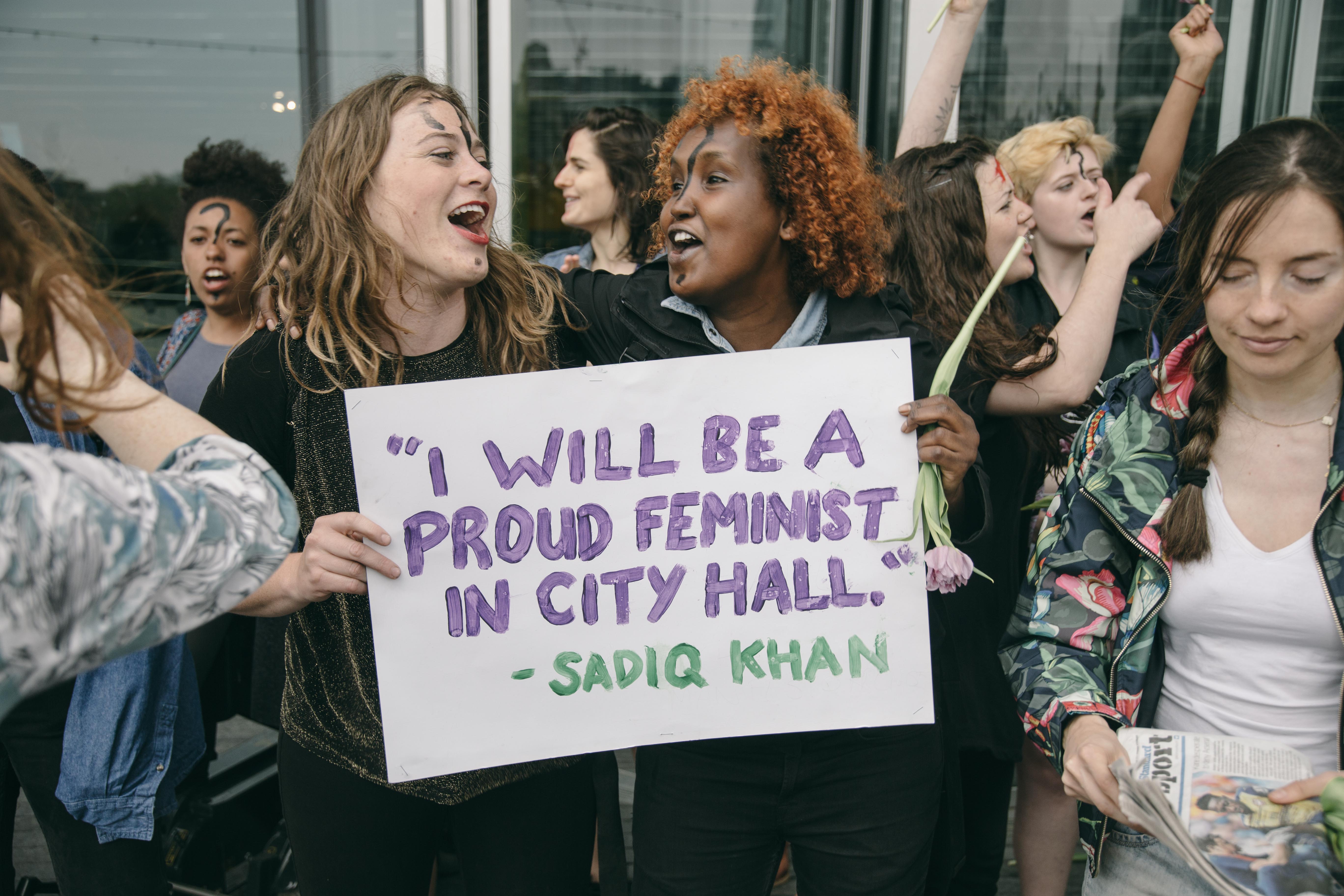 As it hits five o’clock, a group of the activists march up to the entrance of London’s City Hall, the headquarters for Greater London Authority, in order to test Khan’s claimed dedication to feminism. Just four days after being elected into his new post, these radical women want to make sure that support for women’s issues are, as he has promised they will be, at the heart of his agenda for the city. 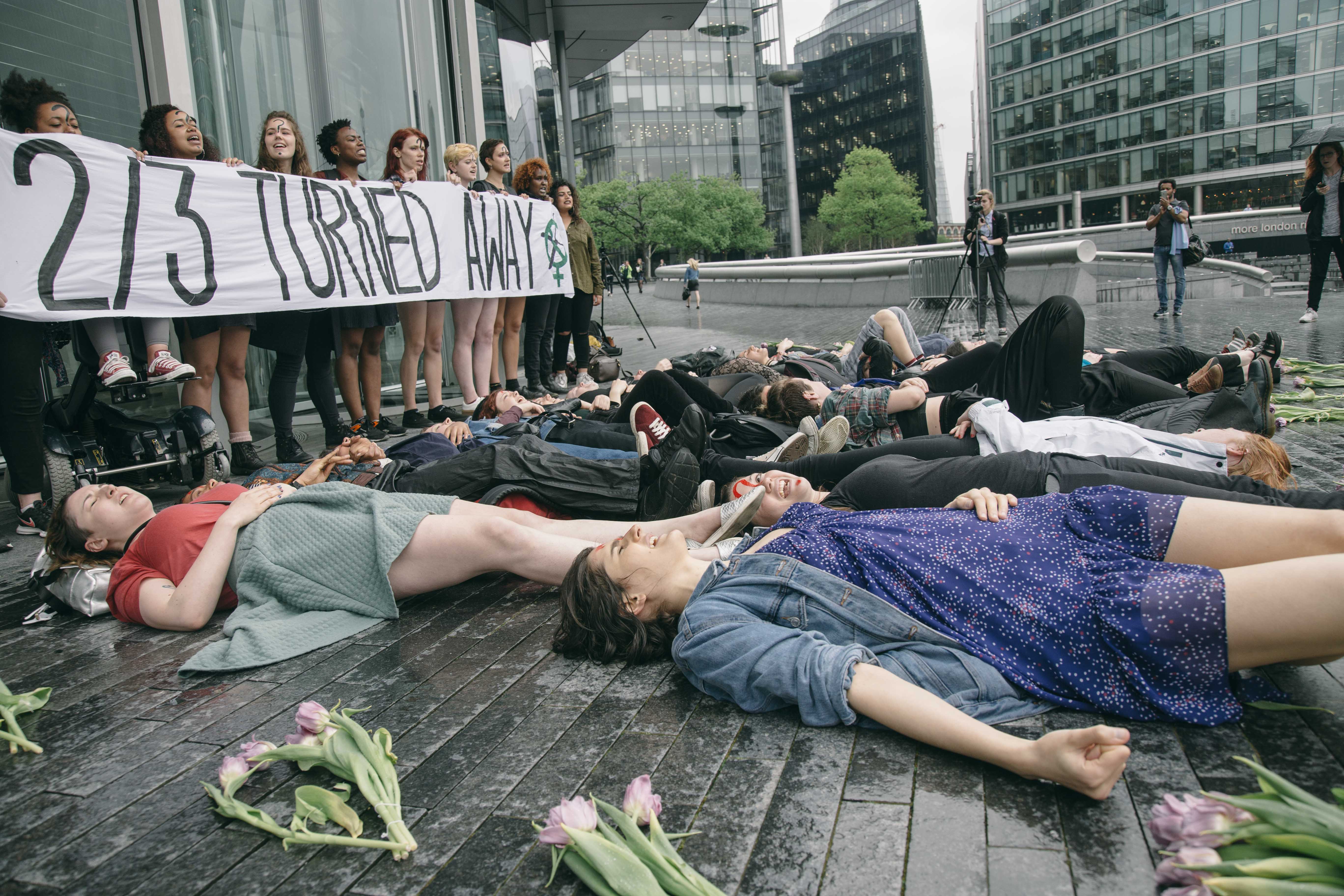 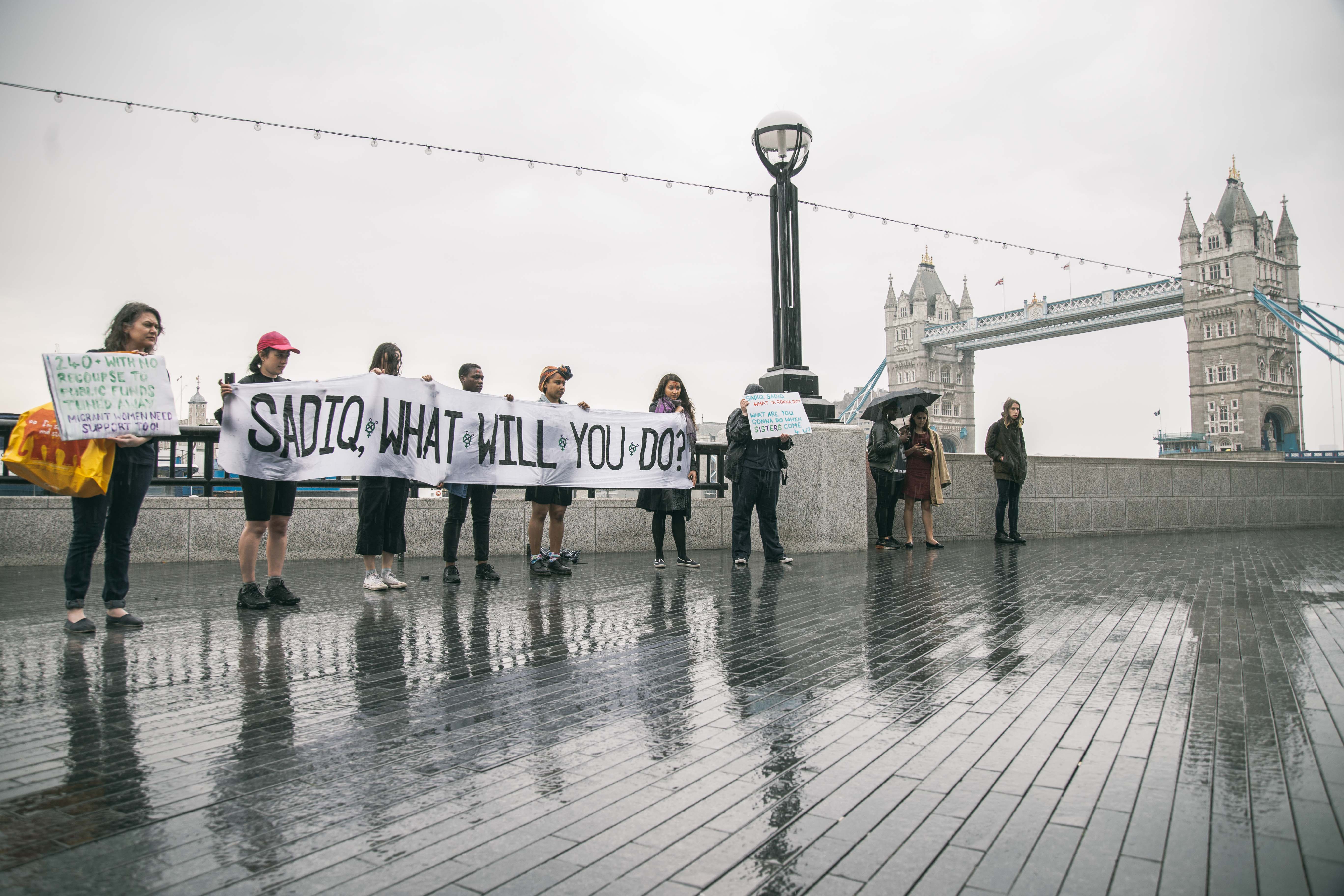 With rain beginning to fall in the grey, humid capital, nine women line up outside an imposing glass building, holding a banner that reads ‘⅔ TURNED AWAY’. Others lie down playing dead on the floor – limp bodies on wet concrete. Some stand on the opposite side, the smoke of green and purple flares rising above their heads. 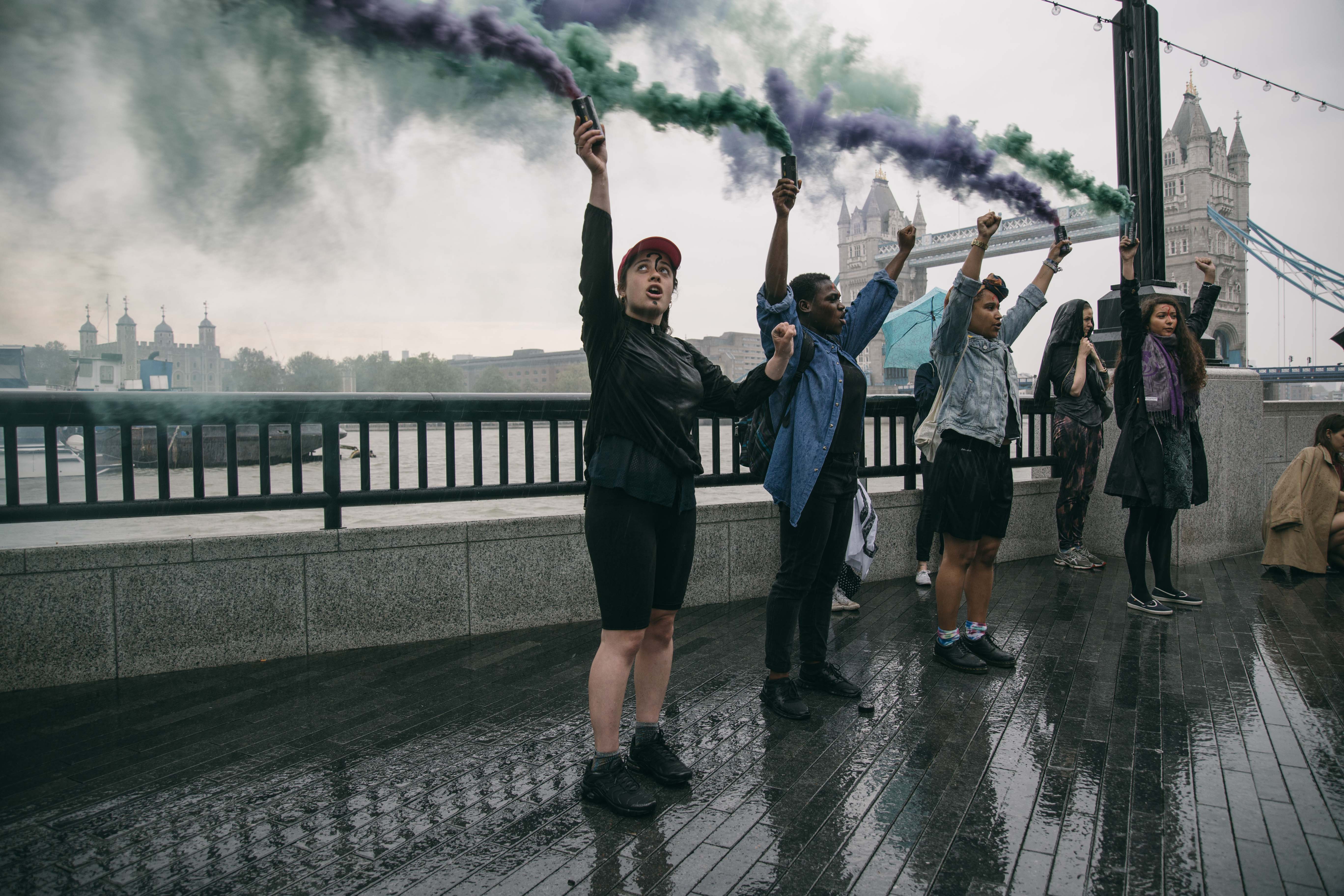 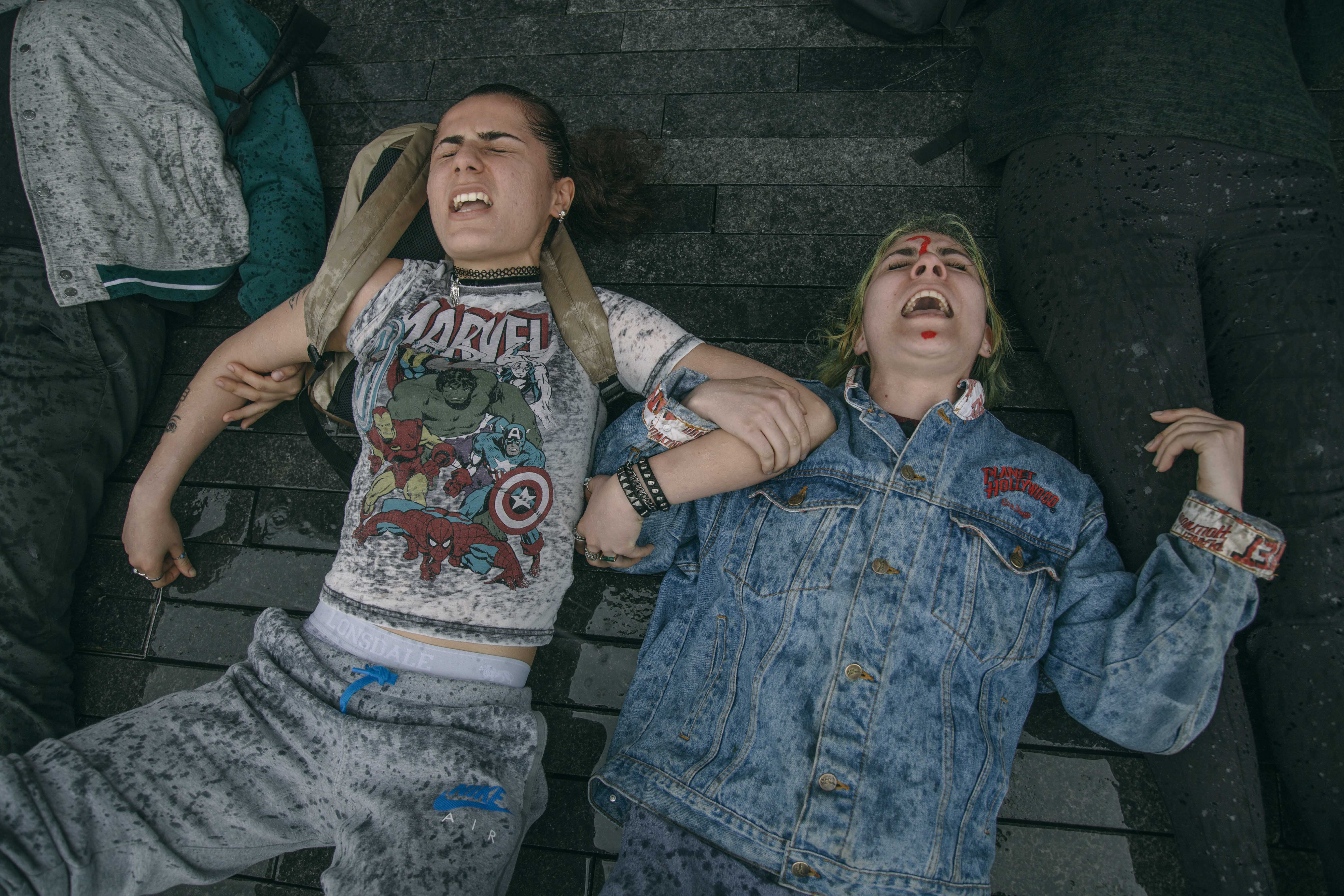 As it stands, two out of three women experiencing domestic violence in London are turned away from refuges – places of comfort and security for those fleeing dangerous homes. It’s down to a lack of spaces and funding from the government, and these activists want Khan to know they won’t let this continue. 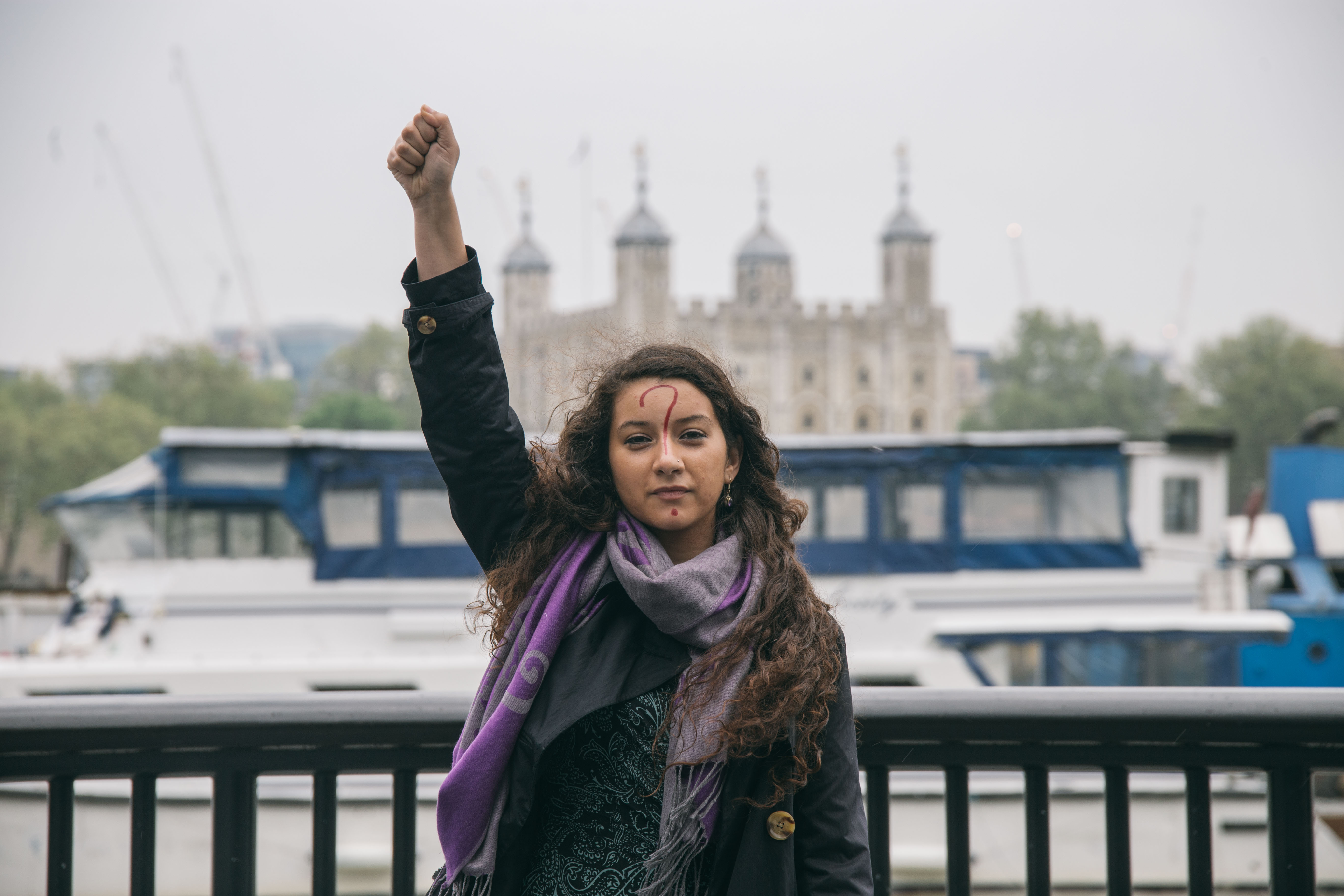 Over the past year, Sisters Uncut have carried out a whole host of direct actions across the UK, and it’s not hard to see why. Since David Cameron became Prime Minister back in 2010, years of austerity have disproportionately affected women. Before we even consider cuts made since 2015, The Fawcett Society highlights that 85% of all welfare benefit cuts have been taken from us too. 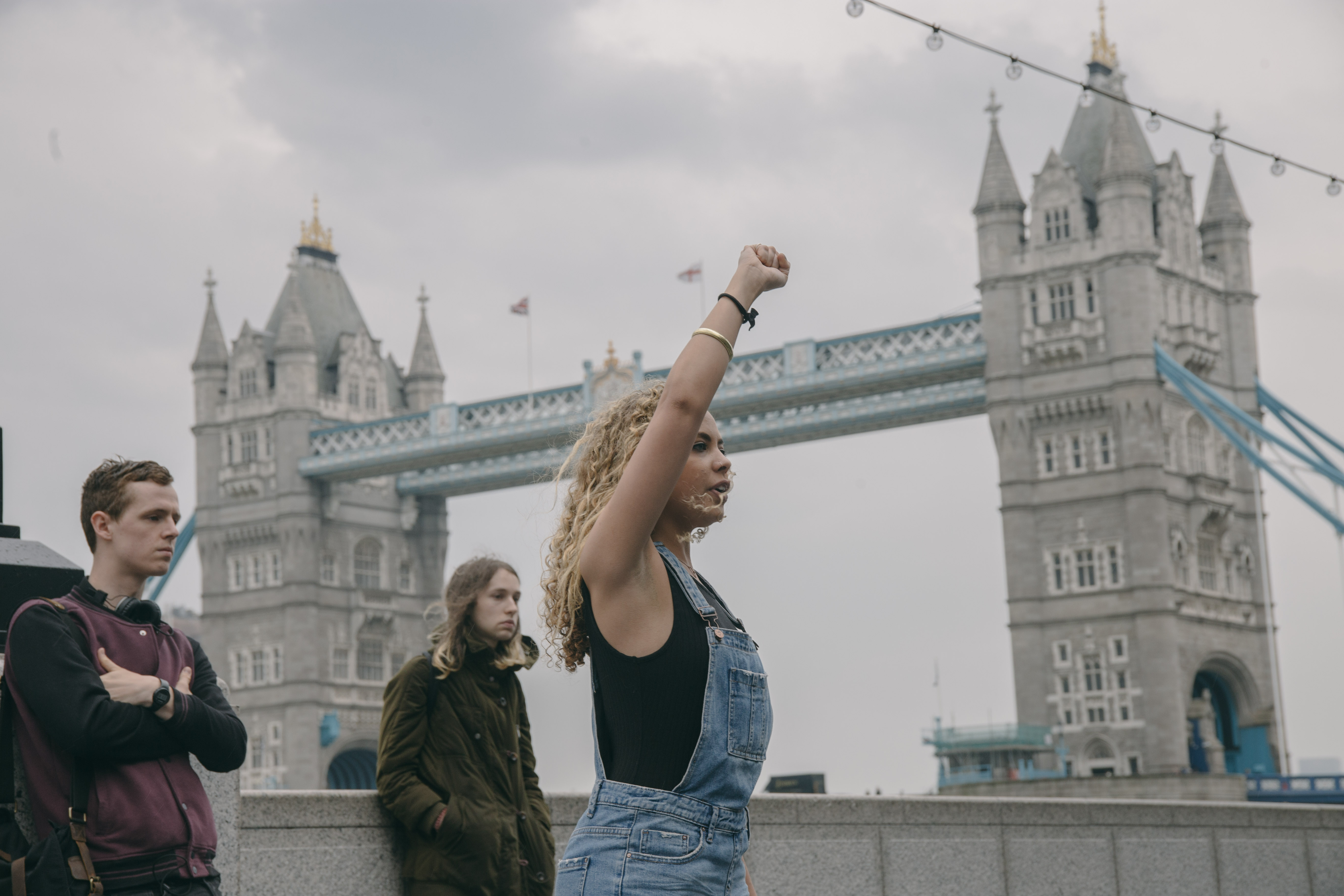 Now, refuges for women are closing down every day, crippled under the lack of support by the government.

“There are cuts, closures, we now know that two in three women are turned away from a refuge – that is an absolute failure”, Janelle tells me, as the chanting continues around us. “Sisters Uncut believes that survivors of domestic violence should be supported by the government. We need secure, long-term funding”, she continues. 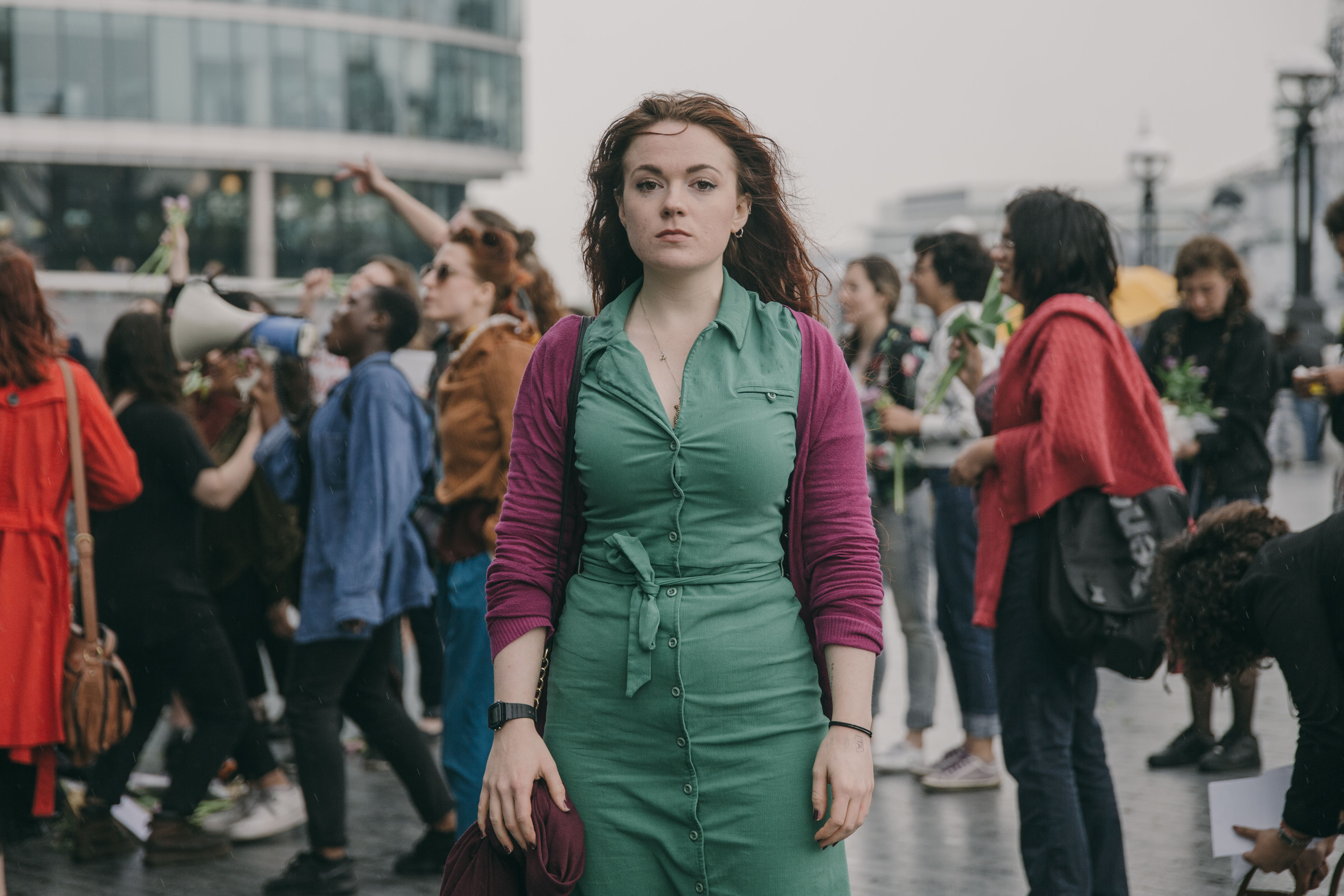 “We cannot wait, we will not ask nicely, we are losing our sisters.”

One confused looking security guard lingers around the scene, but he looks pretty baffled as the protest – emotions high – rages on. Before the bloke in uniform could get his bearings, a siren starts blaring. Much to his relief, the women had set it off themselves.

“We are Sisters Uncut! We stand in solidarity with all survivors of domestic violence”, comes a voice through a megaphone, the sirens now paused as these words pierce through the silence. 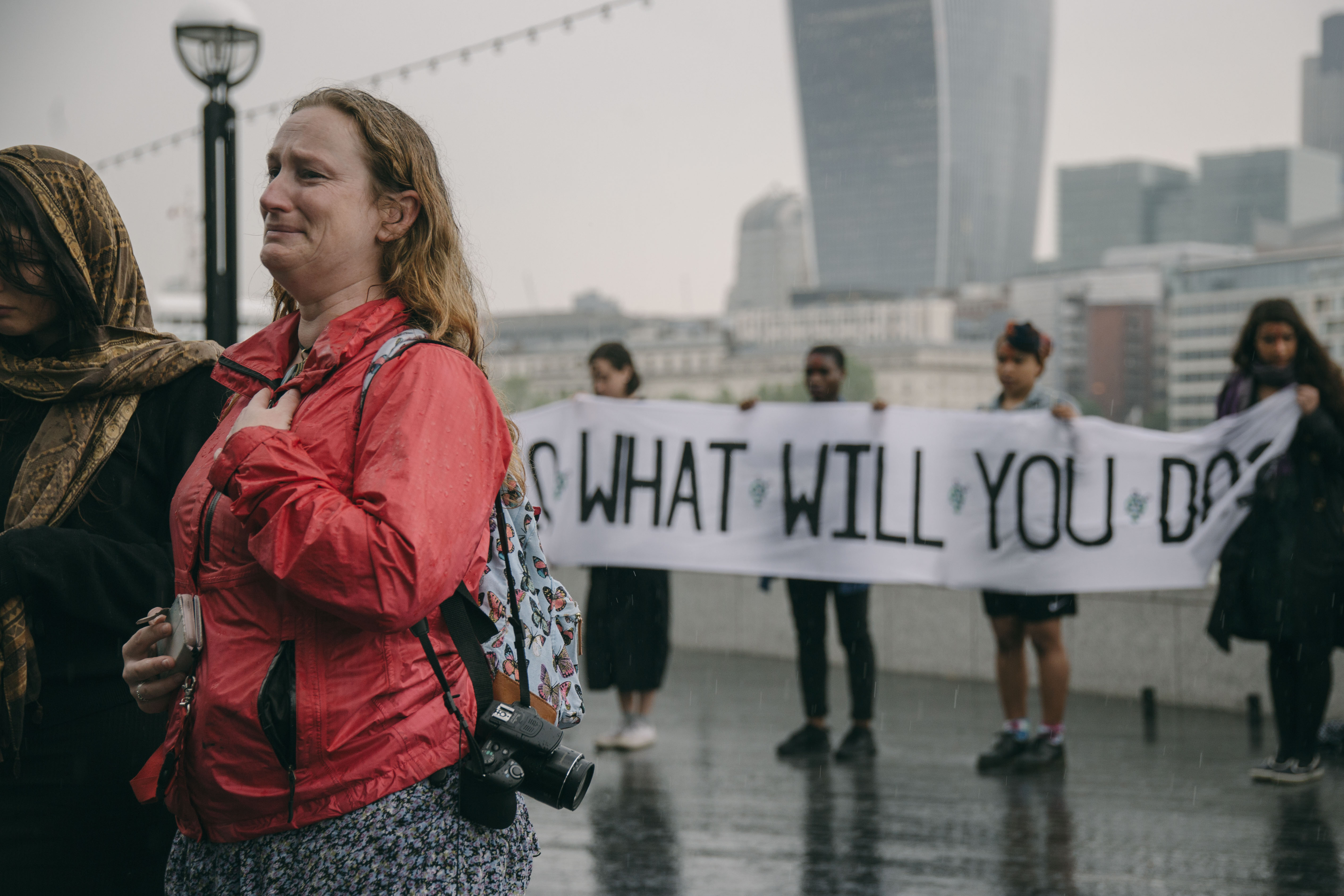 Some of the activists who surround the scene are armed with placards addressed to Khan. “How much blood will be on your hands?”, they read.

When I ask one campaigner about what they expect from Khan – on paper his policies for women look good – she explains the group had decided to take the action before the election results had even been announced. “We looked at both of their manifestos,” she said, “we just wanted to make sure that they knew”. It was clear that, to Sisters Uncut, this is not about who is in power. 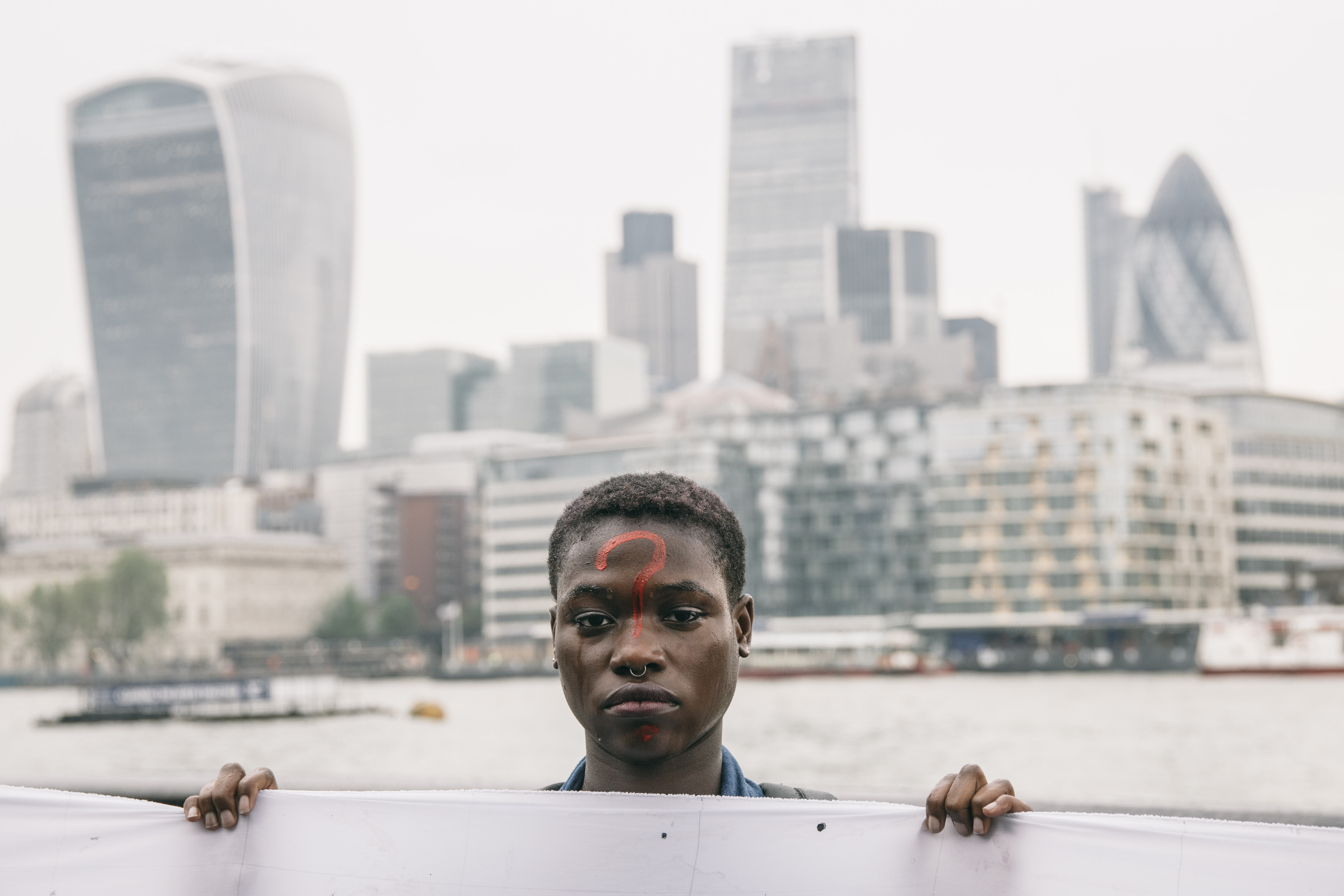 Soon the group begins to read aloud a list of names, each one a woman who has died as a result of male violence , those remembered aged anywhere between twenty and eighty years old. As they do so, pink tulips are handed out to the crowd.

With a tulip for each name, a sense of collectiveness and sadness quickly strikes this central London street. A few members of the public are so moved by the spectacle that they begin to lay the tulips down around those still on the floor. It’s an impromptu funeral for the victims of austerity, and I’m heartbroken. 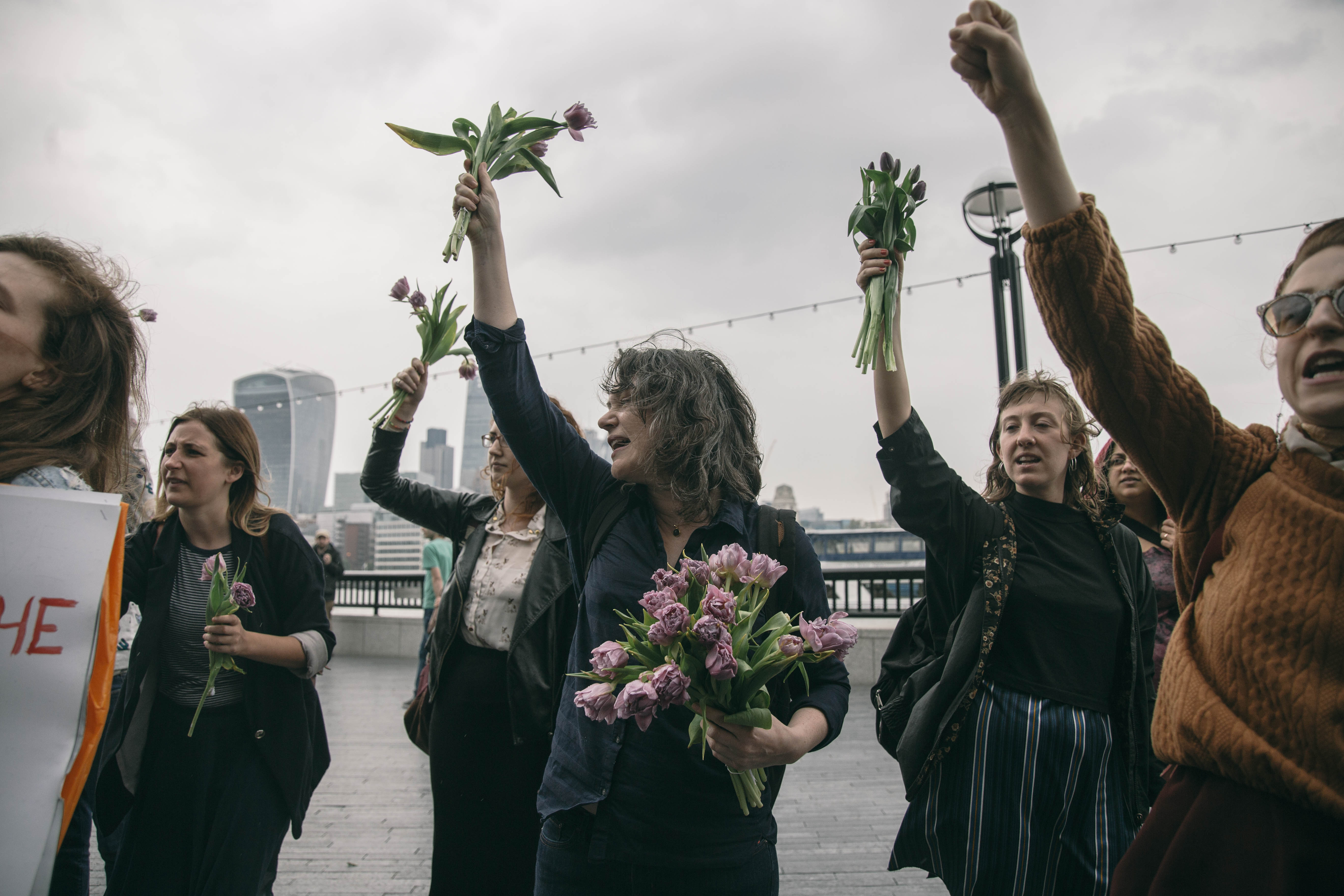 It’s once again silent, and each person in the crowd lifts a fist in strength. A speaker from Southall Black Sisters comes forward and makes her own demands to Khan, on behalf of the organisation. 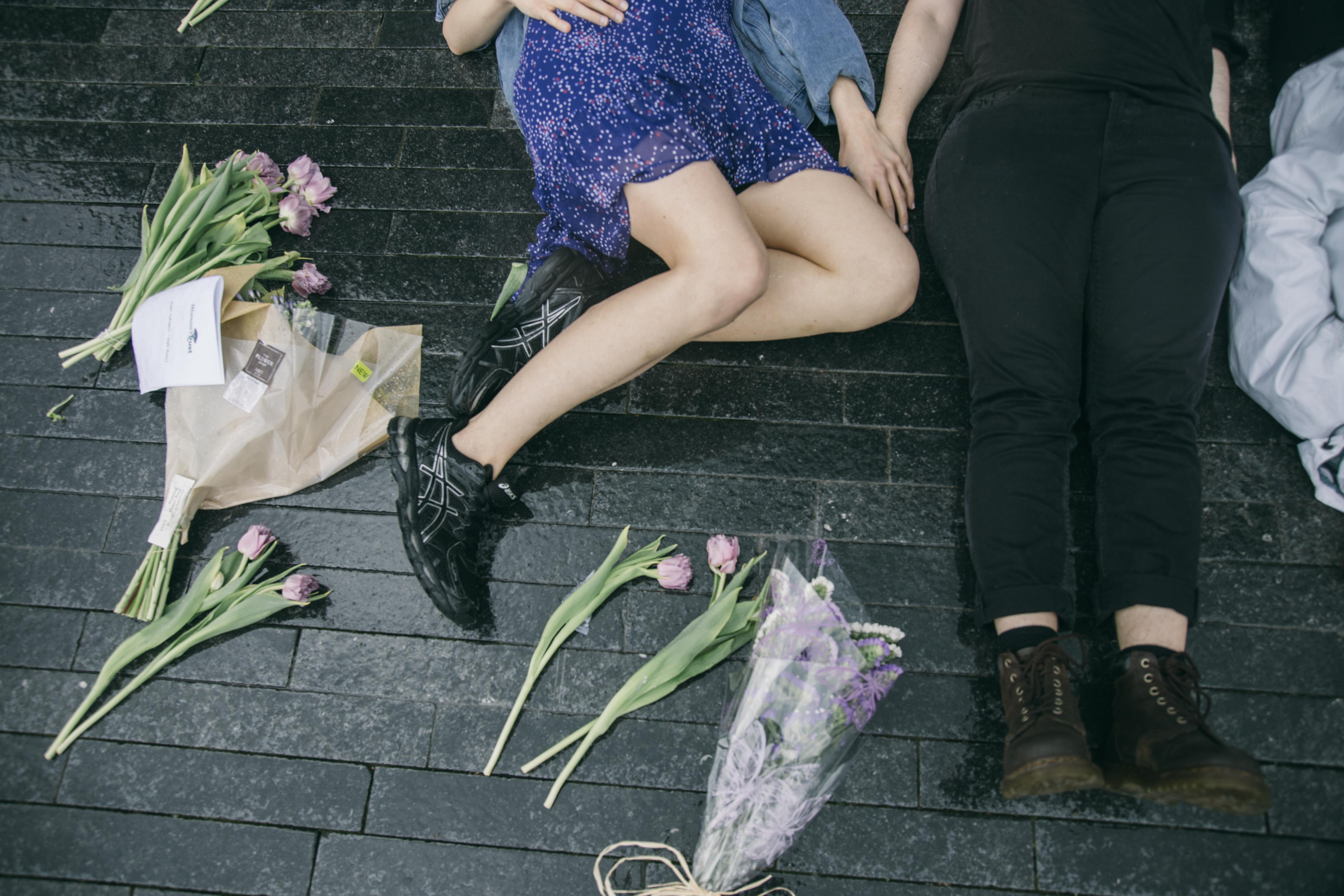 The organisation clearly has high hopes for the new mayor, but they remain sceptical too. “We welcome the mayor”, she tells us. “We hope that he will not forget his human rights background as he carries out his work, we urge the mayor to put his money where his mouth is.”

As she lowers her megaphone, the crowd begins to applaud and the campaigners start their chanting once again. 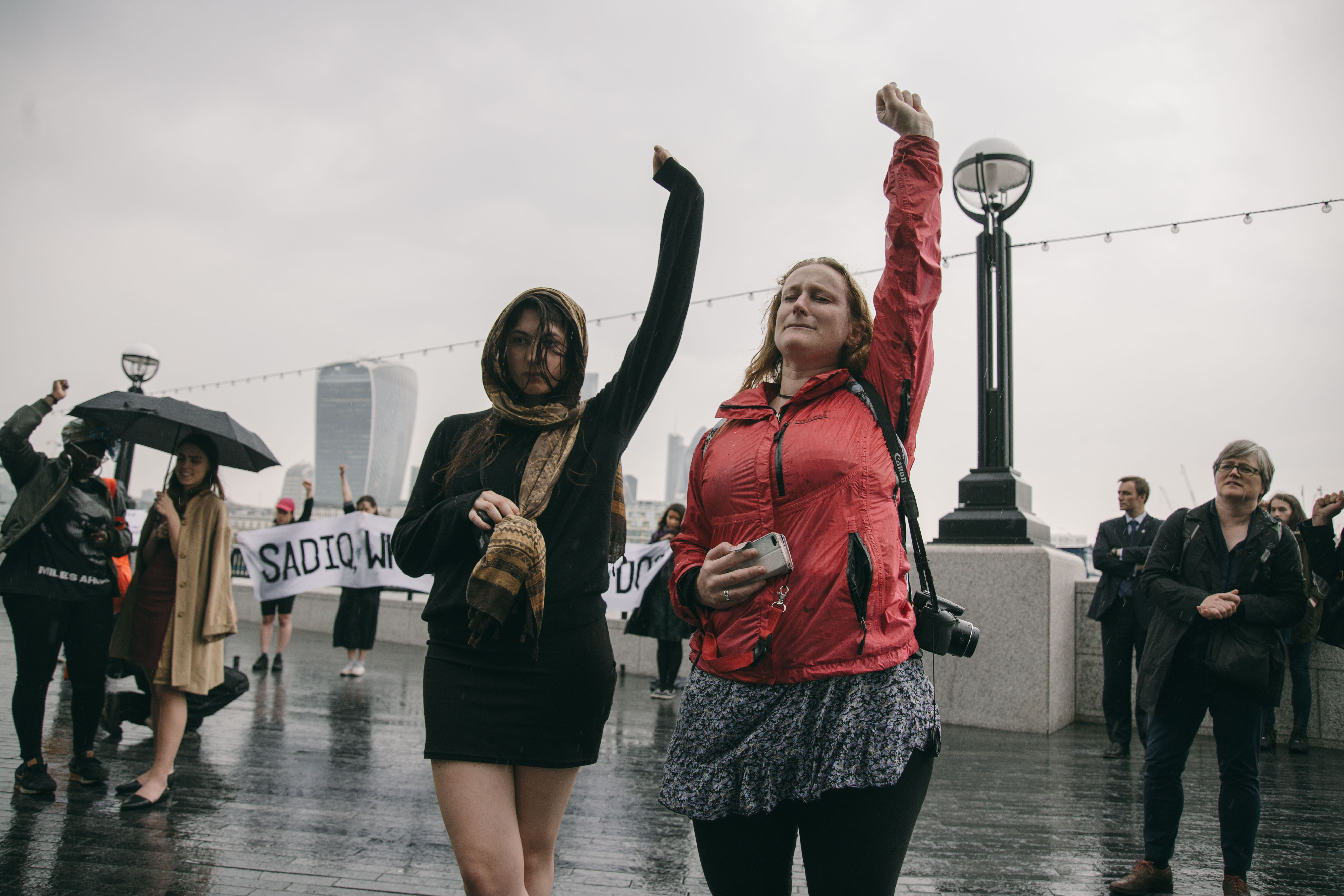 It is not a threat, but a promise; they’ll not forget his claim to support the women of London.

As this mood shifts from mourning to a celebration of sisterhood, I grab a chat with the speakers from another charity, Woman’s Trust. “If we provide a refuge, we’ve only got eight beds and say we’ve got twenty four women come in – we can only take the first eight”, she tells me, deeply saddened by the inability to provide all survivors with their vital services.

They also place an emphasis on where funding needs to go –“we need money for prevention”, they say, “because otherwise it’s just part of a horrible cycle. We can do all the work to support the women, but what’s stopping it? What about teaching men not to rape women?” 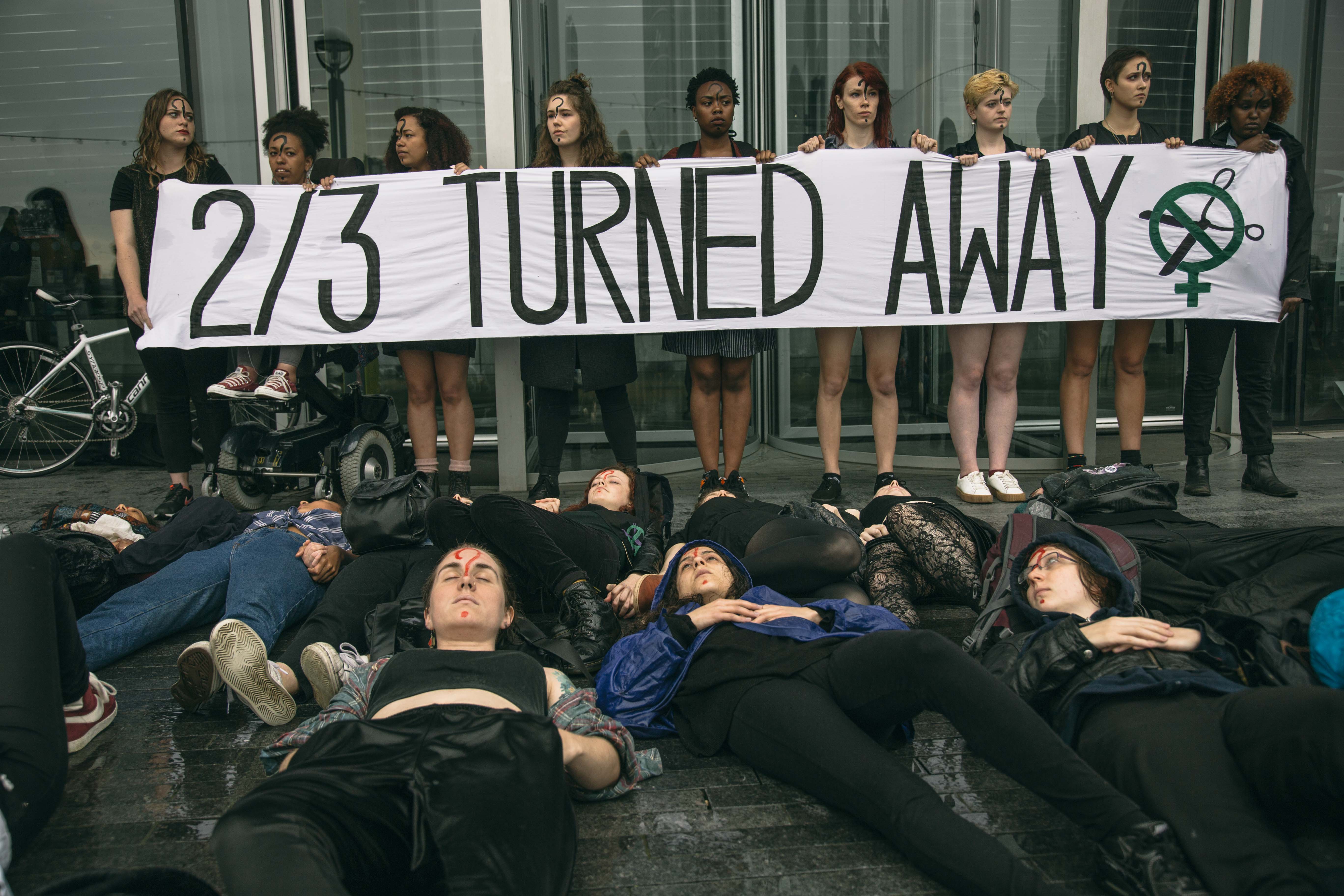 This display by Sisters Uncut serves as an emotional warning for the urgency and attention that women’s services so desperately need from the government. By putting on such an impassioned protest, pointed directly at Sadiq Khan, they hope the new mayor of London will hear them, and back their fight with everything he’s got.

Linkedin
RELATED ARTICLES
OTHER ARTICLES
The New York MC reflects on his experience with Trumpian US immigration policy, and how it impacted his career.
Welcome to the Death Well: a gravity-defying display of fearlessness that reimagines what’s possible on a two-wheeled machine.
Mike Smith’s intimate photos offer a detailed record of the inhabitants of Boston’s streets in his characteristic non-judgmental yet direct approach.
The rapper talks injecting humour and fun into his sound and challenging drill stereotypes.
The Philadelphia local has made a name for himself capturing the hardcore scene – and over more recent years, he’s been ramping up his coverage of the fight for social justice.
With a new bill seeking to further criminalise asylum seekers, the work of a group of volunteers monitoring small boats in the English Channel is all the more vital.