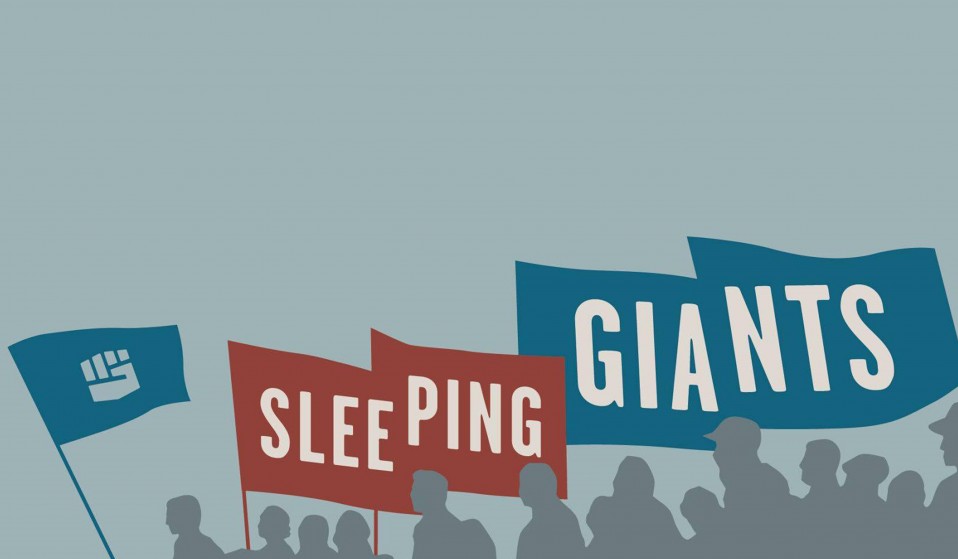 These anonymous activists are publicly calling out companies funding bigotry by advertising on Breitbart, using the power of social media to force change.

Sleeping Giants are the anonymous activists publicly calling out companies funding bigotry by advertising on Breitbart, using the power of social media to force change.

It’s 5pm on a Friday when my phone starts to buzz. No number shows, just the word “unknown.” I’m greeted by an unexpectedly upbeat voice with an American accent. After days of sporadic interactions on Facebook Messenger, it’s the call I had been waiting for. The voice at the end of the line tells me that he’s Sleeping Giants, though he’s open about feeling weird referring to himself as that. But for the sake of anonymity, he won’t give his name.

Sleeping Giants claim to be “dedicated to stopping racist, sexist, homophobic, xenophobic and anti-Semitic news sites by stopping their ad dollars.” They’re social media activists publicly calling out companies who advertise on Breitbart, to ultimately cut the site’s funds, with the intention of shutting them down.

I was told from the get-go that the founders of Sleeping Giants require anonymity because they work in the tech industry. They don’t want it to appear as if there’s a “conflict of interest”. The only details disclosed are that “several” people work on the campaign, and this is the first time they’ve done anything like this. “It’s not really about us,” my mystery caller tells me matter-of-factly.

@ChuckECheeses I have many great childhood memories of you. Please don't taint them with ads on racist, alt-right Breitbart. @slpng_giants pic.twitter.com/7COb3azDx2

The campaign has gained serious momentum after its low-key start in mid-November. Following the presidential election, the campaign founders were curious about Steve Bannon’s background at Breitbart, and found themselves dismayed by the content on the site. “It’s bigotry masquerading as news,” he explains. “We knew they had a massive readership that was looking at this stuff and taking it in as fact. That was pretty shocking.”

Sleeping Giants noticed a company advertising on the site they considered to be fairly progressive, so quickly set up their Twitter handle and sent them a screenshot of the ad. The CEO got back almost straightaway to say they had no idea it was there and it would be taken care of. “At the beginning we saw ads for Islamic Relief on Breitbart, and that’s really crazy,” Sleeping Giants recalls.

They watched more and more ads pop up from companies inadvertently endorsing Breitbart with their marketing budgets, realising the scale of the problem they are up against: “We figured maybe we were standing at the top of a huge fucking iceberg. We kind of knew right there that was the canary in the coal mine and there was something bigger at play here.”

Sleeping Giants’ campaign is part of a wider trend of social media protests encouraging businesses to resist the right-wing ideology associated with Trump’s administration. Other examples include #GrabYourWallet, which encourages the public to boycott Trump products, and the #DeleteUber movement, which led Uber CEO Travis Kalanick to resign from Trump’s economic advisory council in February.

However, Sleeping Giants claim they’re not targeting any individual in particular: “We’re very careful to make this about bigotry and not about politics. Unfortunately they’re very wrapped up in each other right now.”

Their approach is simple. They ask people to take a screenshot of ads they see on Breitbart, then tweet to the company to politely inform them, tagging Sleeping Giants so they can keep track of the campaign’s progress. Using this template, Sleeping Giants and their thousands of “helpful” followers have got over 1500 companies to block Breitbart from their ad buy. Their fourteen global affiliates run smaller channels that look at the issue in a more localised way. “The EU has been there almost since the beginning and has just been awesome. We don’t really need to set an agenda for anybody,” he says.

The entire concept relies heavily on the participation of their followers to call brands out, a type of clicktivism with material results. The sense of collaboration that has characterised the movement so far is unprecedented as far as the founders are concerned. “Now there’s so many people and it’s sort of a community that polices itself. It’s really heartening and very cool to watch. From a personal standpoint I’m blown away by how it’s grown,” Sleeping Giants explains.

“I feel like after the election people were engaged and keen to get engaged in a way that didn’t just involve signing a petition.”

Predictably, not everyone on social media has been on board with the campaign. “We’ve definitely had a lot of trolls from the very beginning,” the caller notes. “Most of the time they’re saying that we’re trying to stamp out an opinion different than our own. But we believe in free speech, plain and simple. We think the exchange of ideas is absolutely necessary and how this country works.”

While some Breitbart supporters have reacted negatively, the vast majority of the organisations Sleeping Giants have contacted have been positive about the experience. “Most companies we tweet at are incredibly courteous when they get back to us. They’re not trying to excuse it, most of them are very happy that we got in touch.” The likelihood is, most of them have absolutely no idea where their ads are actually going online, and who they’re therefore funding.

Many brands use networks such as Google for packages that place them across a broad range of websites based on demographic categories, such as age, gender and interests. However, this is currently causing a huge furore in the advertising industry, as organisations such as the Guardian have found themselves inadvertently helping extremists make money through these problematic placements. The Guardian, among others, made the decision to pull all of their ads from Google last week.

According to Sleeping Giants, it’s time for networks such as Google to take responsibility if the situation is to improve: “If people start to demand this from networks then there will be a wholesale change in the way things are done,” they explain. “It’s irresponsible to spray ads all over the internet without someone knowing where they’re going.” This mounting pressure from big brands has resulted in  announcing a strategy to address these concerns, though it has been met with scepticism.

What online activists like Sleeping Giants unearth is an increasing desire to hold companies to political account when they are financially implicated. In such divisive times, it’s clear that corporations can no longer sit back without facing criticism from the public, and collectives like Sleeping Giants help bring these tech concerns to light.

There are notably fewer companies advertising on the site since the campaign began. “This action has had a clear effect. We don’t know the financial effect. We’re currently trying to figure that out,” Sleeping Giants say. Among the 1500 potential sources of revenue snatched from Breitbart are big brands such as Mercedez-Benz, Vodafone and Panasonic.

The campaigners plan to target other sites that propagate hatred, but remain focussed on Breitbart for the time being. They hope that their international affiliates across the EU, Asia and Australia can eventually branch off to focus on more localised racial issues besides Breitbart. For now though, Sleeping Giants say the war is far from over: “Until there’s fundamental change in how these sites are funded I’m not sure our job is going to be done.”

Linkedin
RELATED ARTICLES
OTHER ARTICLES
Rhiannon Adam spent three months capturing an ageing society wracked by division, isolation, and the aftermath of scandal.
The idea that a younger generation is abandoning work has become a popular narrative online, but it doesn’t necessarily reflect reality.
Birdy Chu reflects on documenting the historic moment in which the territory was formally passed back from the UK to China.
Sean Maung’s photos are a love letter to the Black and brown communities that make up New York.
The workforce is now gearing up for industrial action after receiving a measly pay rise, reports Ella Glover.
In his 2008 series, the photographer pictured himself as Angela Davis, Martin Luther King Jr., Malcolm X, and other prominent figures.