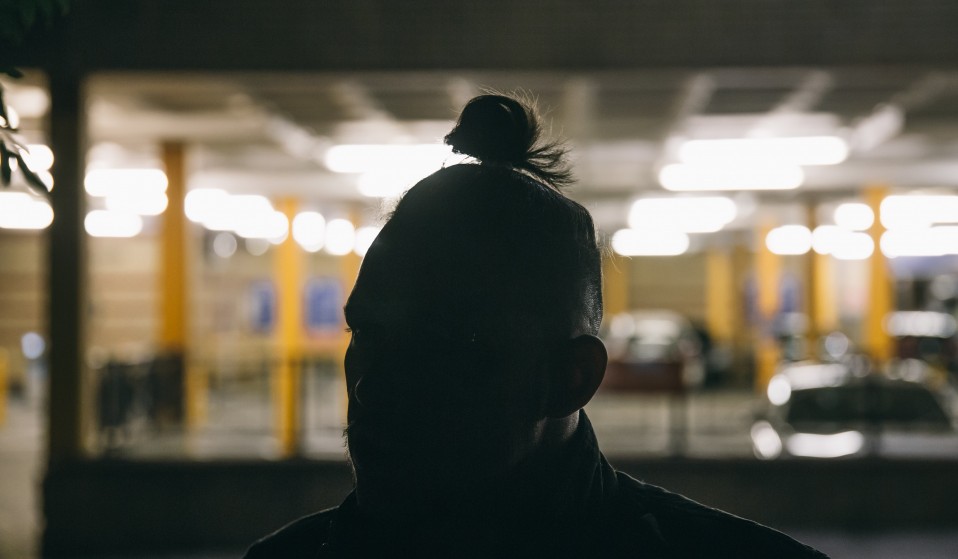 Darren Davies' high-profile occupations of derelict buildings in Southend are forcing a debate around the lack of housing and support for homeless people in the area.

Darren Davies' high-profile occupations of derelict buildings in Southend are forcing a debate around the lack of housing and support for homeless people in the area.

It’s just past 10pm in on a Wednesday night in Southend, Essex. The centre of the sleepy seaside town is pretty much deserted, except for a few drunken groups of teenagers noisily staggering between various trashy clubs and bars.

Aside from the classy nightlife, its usually boy racers shooting up and down the promenade in souped-up Peugeot 206s and slightly tired looking theme parks that attract people to this seaside town in Southeast England, but my reason for visiting was somewhat less obvious.

I’m here because earlier in the day I’d got a call from a Darren Davies. Darren is a homeless man who has repeatedly hit local headlines for squatting high-profile buildings in the city centre. “We’re taking a building tonight, let’s just say it’s an iconic location, just off the high-street,” I was told down the phone. As we park the car that evening, I give Darren a call. “Come and find us in the graveyard, we’re making our final preparations”, Darren explained reassuringly in with his calming Welsh twang.

Darren engineered a small town media storm in early August when he occupied the newly vacant British Homes Stores building on Southend High Street, after the collapse of the department store chain. “This is the British Home Stores. I’m British and I deserve a home, so this is my home,” he declared to local online channel Southend TV, and the video went viral. Well, by Southend’s standards.

Putting signs and mannequins in the windows, his highly visible protest connected recent news of the self-enrichment by BHS management that hastened the chain’s collapse, the growing numbers of homeless people in Southend, and the wealth of empty properties that could be used to house them. 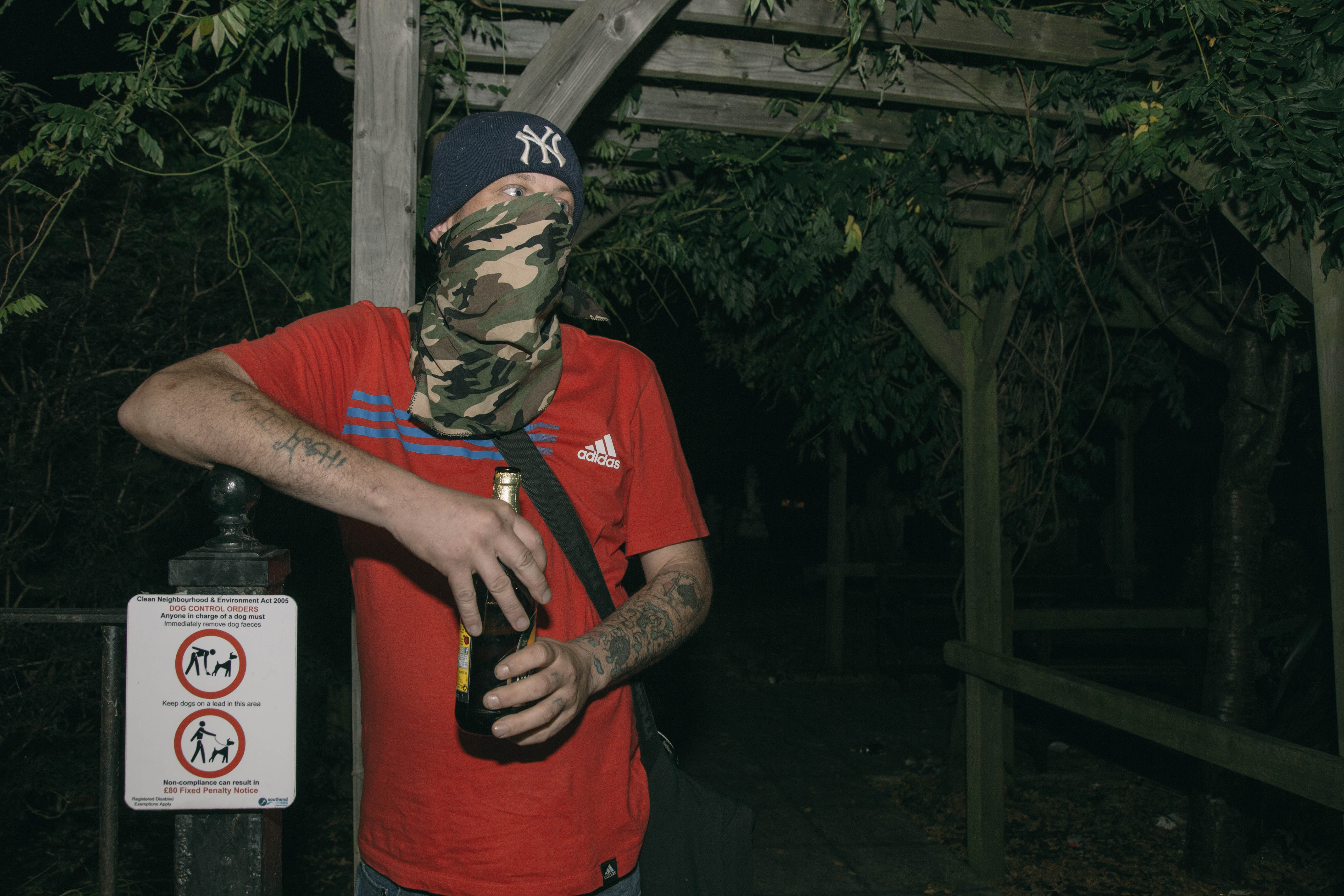 As I meet Darren in the graveyard, he introduces me to his friend Lum (above), who has helped him ‘crack’ many of the squats the pair have taken over the last year. Darren moved to Southend 12 years ago, and has been homeless since 2012.

In Summer 2015 he was living in a tent in Southend Cliff Gardens, overlooking the Thames Estuary. “I enjoyed living in a tent – I was causing no-one no harm, I kept my area clean,” Darren explains. “The media created negative propaganda about us living on the cliffs.” After a battle waged on him and other tenters by the council and local media, he finally moved on and took his first building with Lum shortly afterwards, in August 2015.

“We took that first building because we saw so many homeless people in Southend dying,” Lum explains. “We know at least nine people who have died in the last year through being homeless. One of our good friends died in a fucking toilet. He wasn’t a junkie, but he slipped and hit his head in a public toilet. He died from the lifestyle of being homeless. That was what snapped it for me.”

As we huddle in the shadows of the cemetery, Darren and Lum explain they took a string of buildings without fanfare, including a Methodist Church and former youth centre, until they squatted the Terrace Guest House, on a Georgian street overlooking the seafront.

The media response gave them a platform to vent their frustrations over the perceived war against homeless people. Realising they were on to something, they took the symbolic BHS building straight afterwards, choosing to announce their presence to passersby from the store’s huge glass windows, and got an even bigger response. It struck a chord with many as it shone a light on corporate greed and the hollowing out of Britain’s high streets. 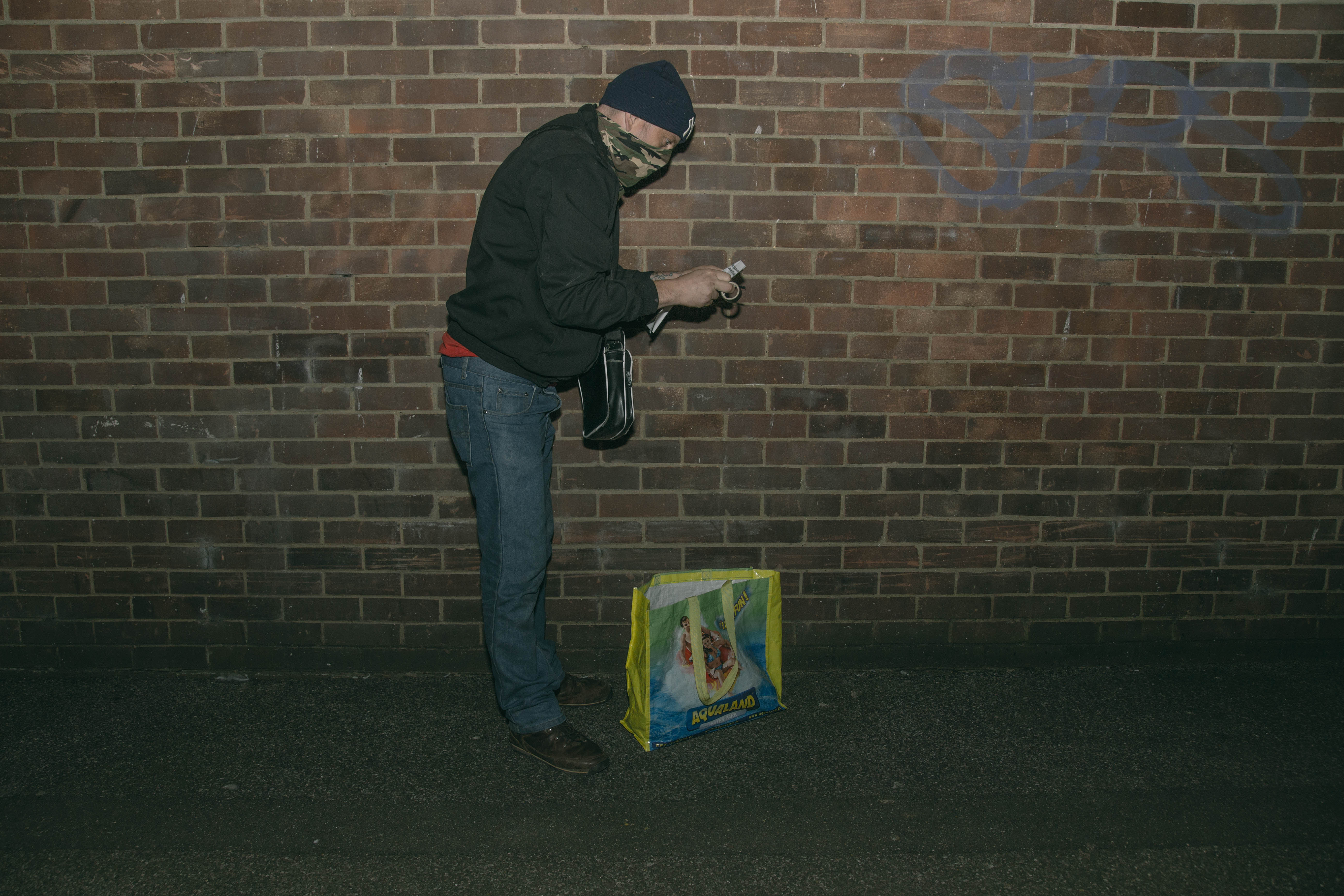 Once Lum and Darren are ready they set off – Lum in the lead – with the necessary legal paperwork and equipment to secure the building in a bright orange bag from Aqualand water park. Following behind is an odd crew, Darren with his distinctive top knot and facial tattoos, two young homeless women who chose not to be identified, a photographer and I.

We pass along the cliffs overlooking the famous Southend Pier, its glittering lights stretching out into the black expanse of the estuary below, before heading up the deserted high street. Just before we hit the giant BHS building, we swing a left down a small alley and stop outside an empty nightclub. Lum sticks the Section 144 notice to the heavy metal door, announcing the squatters’ legal rights to the building. 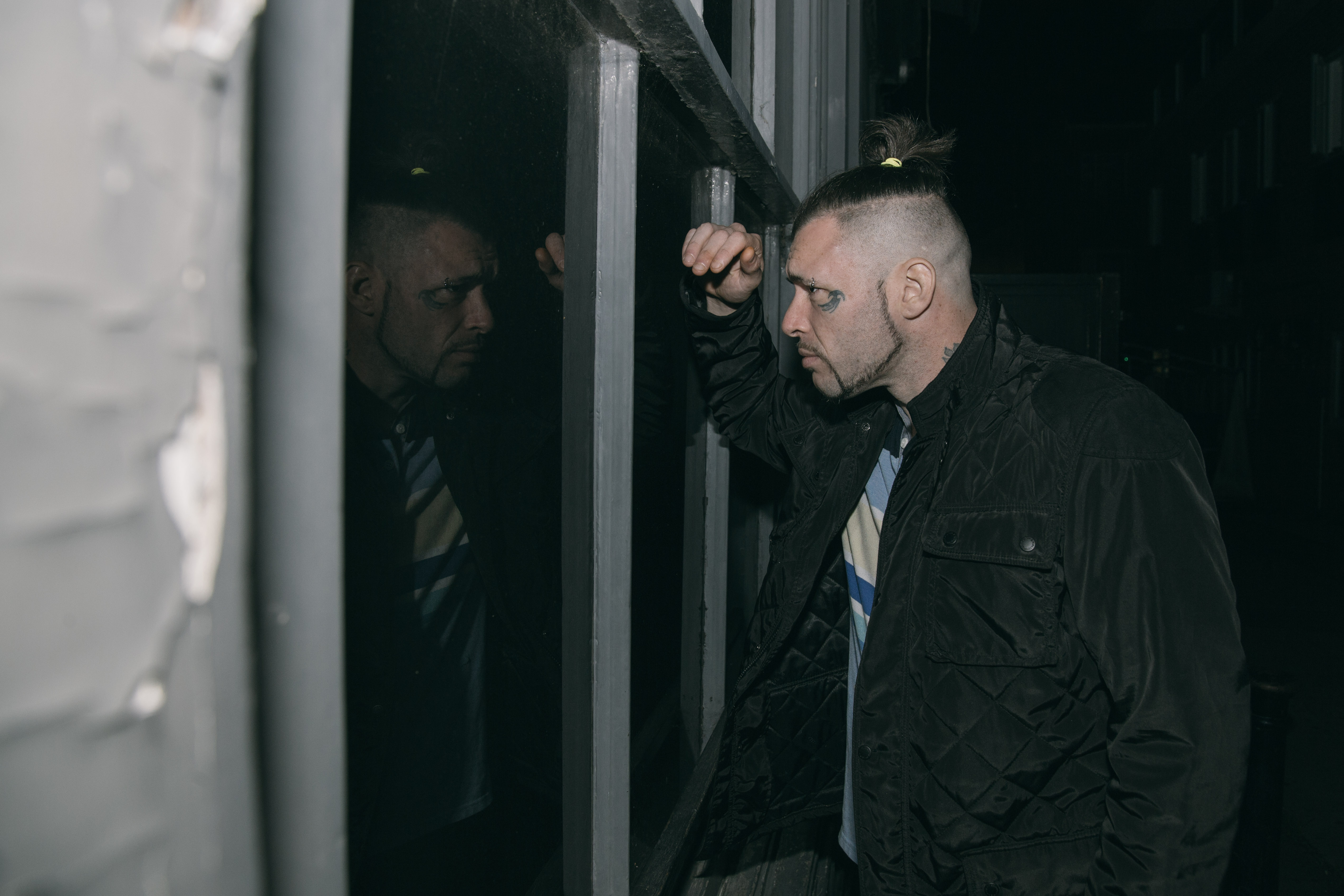 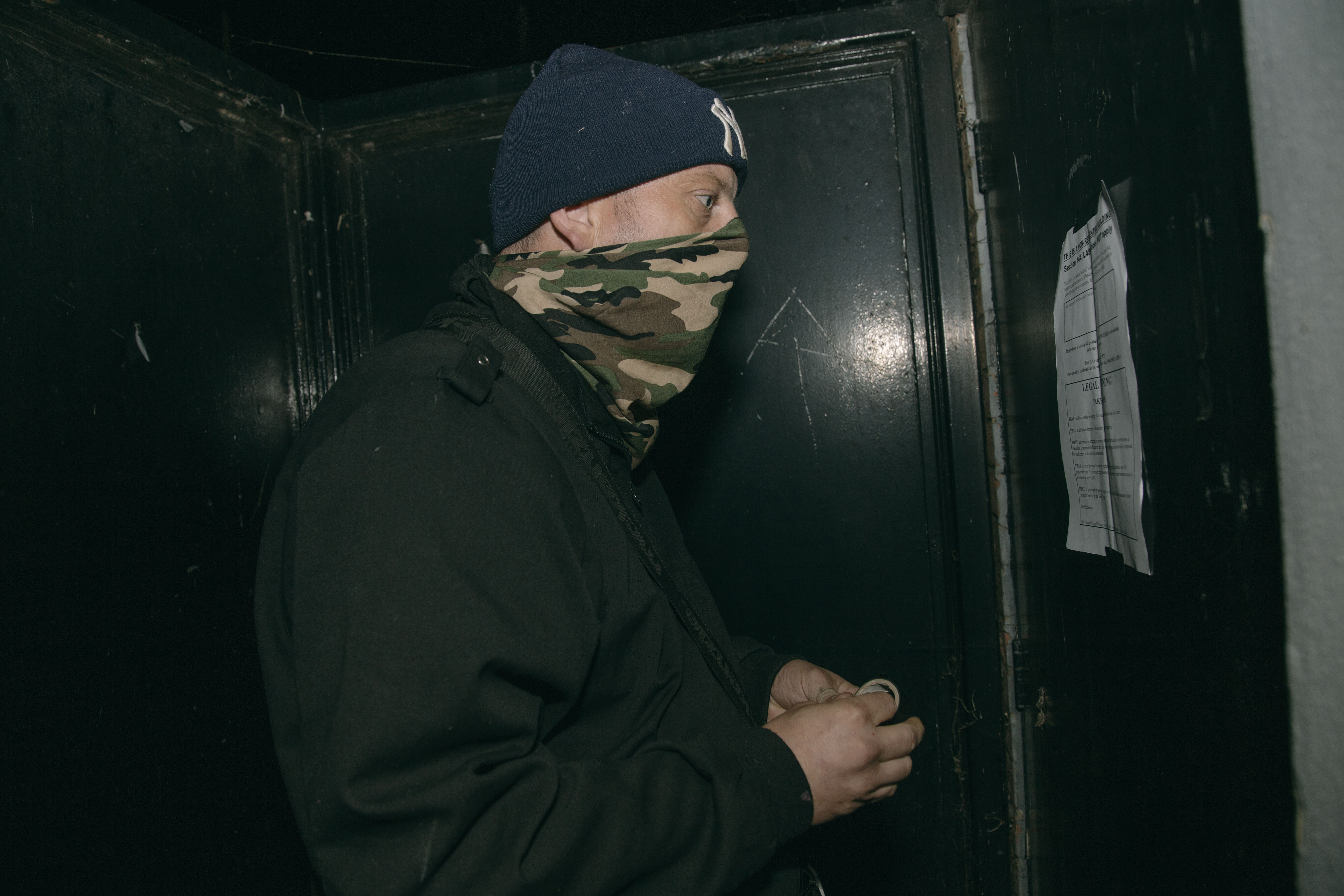 Minutes later, we’re walking through the empty club in total darkness. It shut up shop nearly a year ago, but there’s still the lingering, sickly sweet smell of alcopops and energy drinks wafting up from its sticky floors.

Bottles of Hooch and cans of lager are lined up on one of the bars, and there are empty spirit bottles covering the dance floor. Lum and Darren make a quick job of checking the club over, securing the building and getting the lights on in the upstairs lounge area. 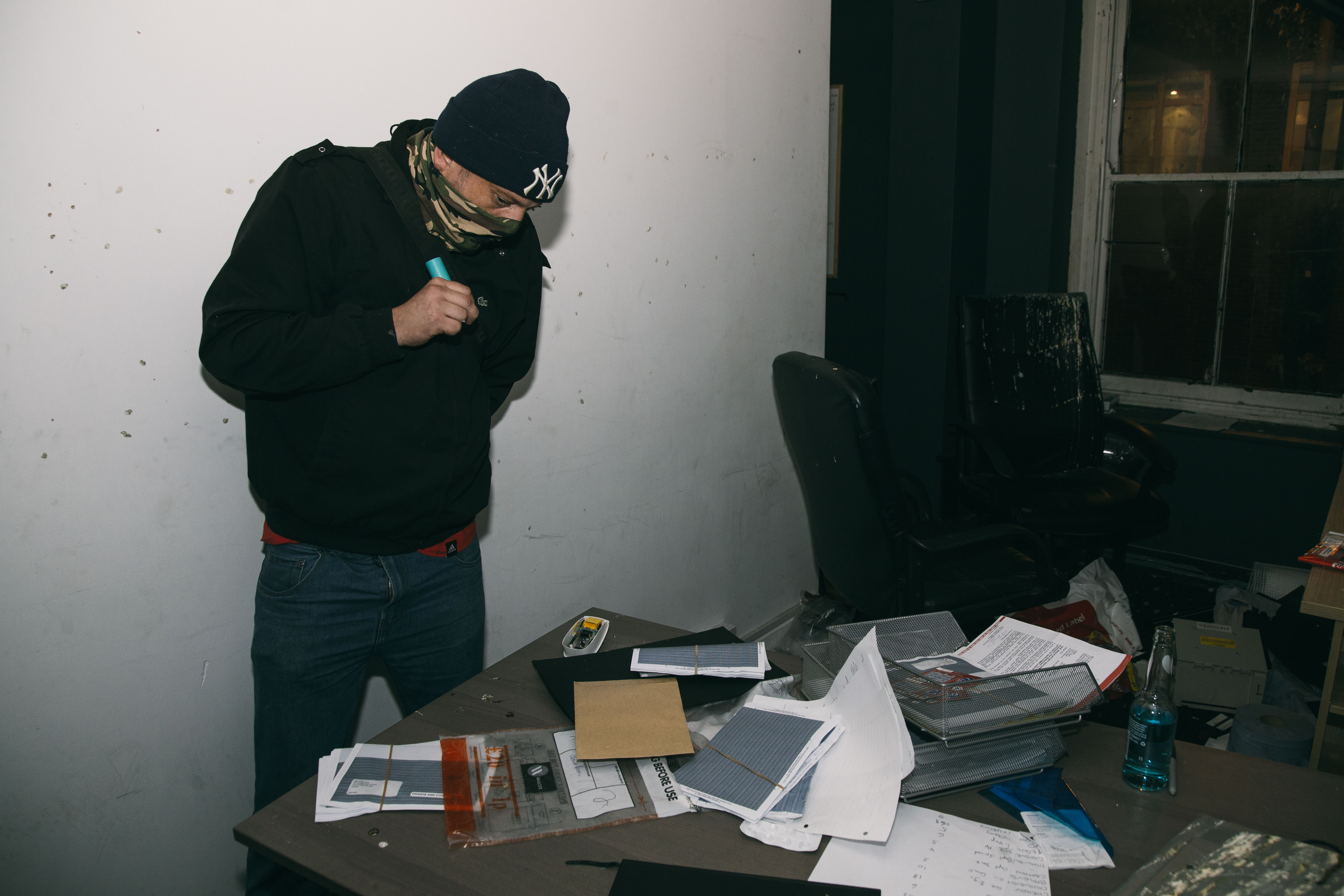 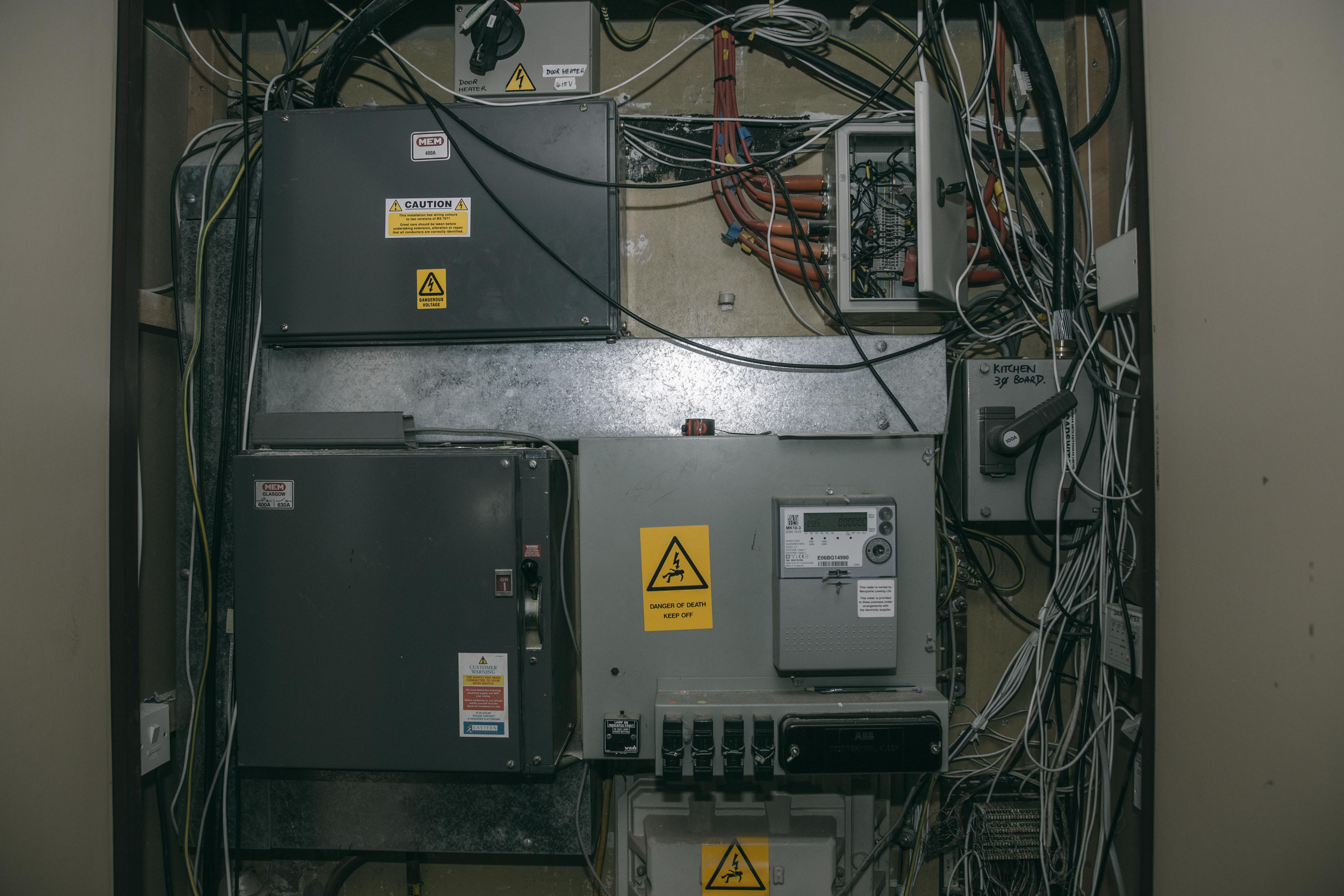 As we take a pew on the leather seats, Lum rolls a spliff, and we get chatting about their plans going forward. Once they’re secure in the club, they’ll put out the word and wait for a reaction. Taking buildings in more out of the way places decreases the likelihood of them being kicked out quickly, so why do they keep going for buildings in such high-profile locations?

“It opens up an avenue to show what is happening in Southend,” Lum explains. “People get sent here for help and they end up dead, in a toilet.”

“It was to create awareness of what the council aren’t doing,” Darren adds. “The [homeless support] system in Southend now generates thousands of pounds per week, it’s not a charity anymore, it’s a complete circle of profit.” 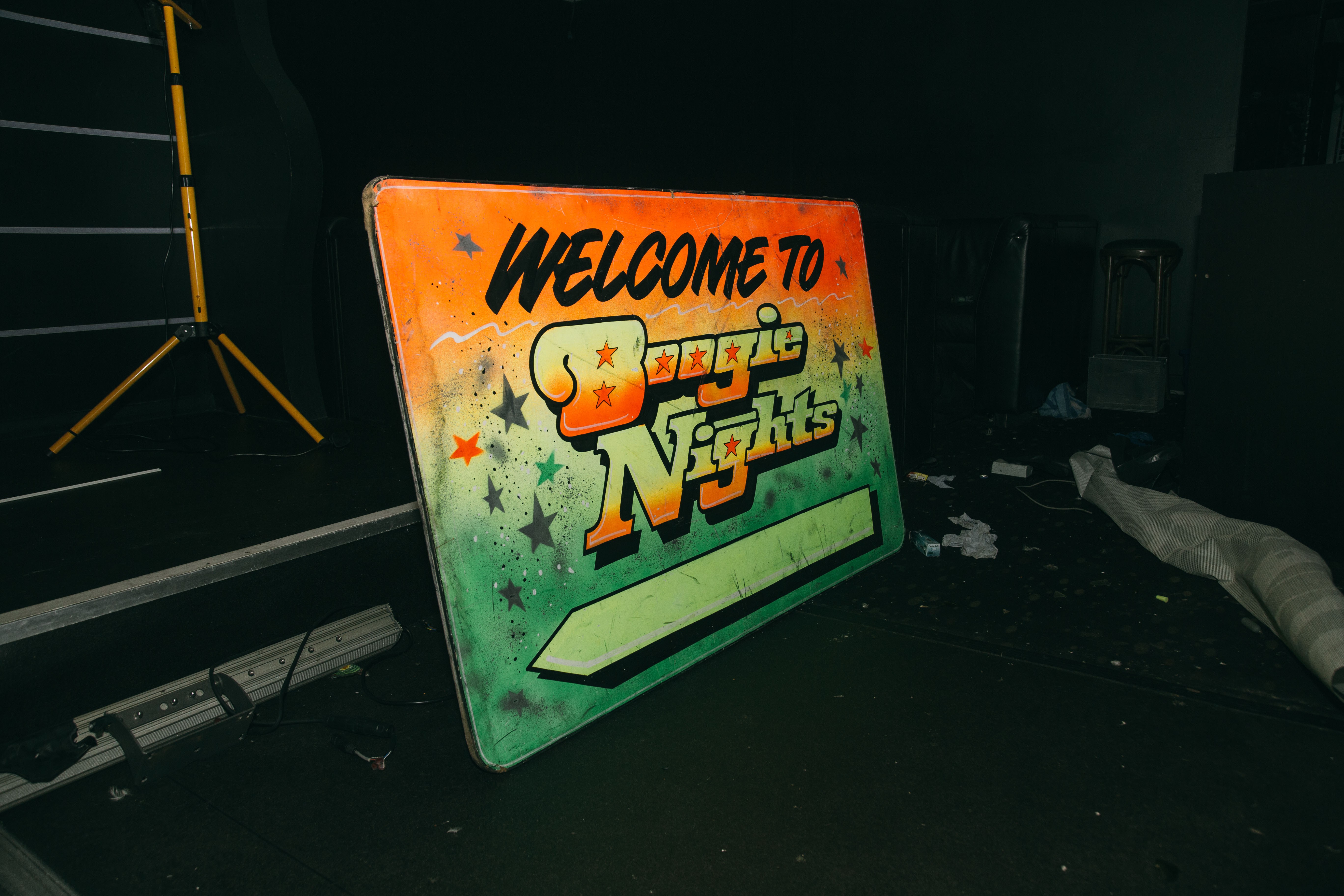 As the UK economy continues to flatline and housing benefits are cut, growing numbers of people are being forced out of their homes. Rough sleeping in the UK has doubled since 2010 and Southend has become a dumping ground for the UK’s homeless. Local authorities, often London boroughs, have been shipping homeless people and families to towns like Southend, where the cost of supporting them is much lower than in central London, for example.

What do Darren and Lum hope to achieve through the high-profile squats? “I don’t want benefits, I don’t want to be housed, I’m happy being free,” Darren explains. “[The occupations] start conversations. Communication with humanity is key. Once everyone talks, everyone prospers. Ultimately, everything’s to do with awareness.”

“Thousands of people are getting evicted and being made homeless every month,” he continues. “The causes of homelessness aren’t being tackled. They’re just trying to push it all to Southend, so it’s not a problem elsewhere. I want to put a roof over my head. And I’ll help anyone else who needs a roof over their head.” 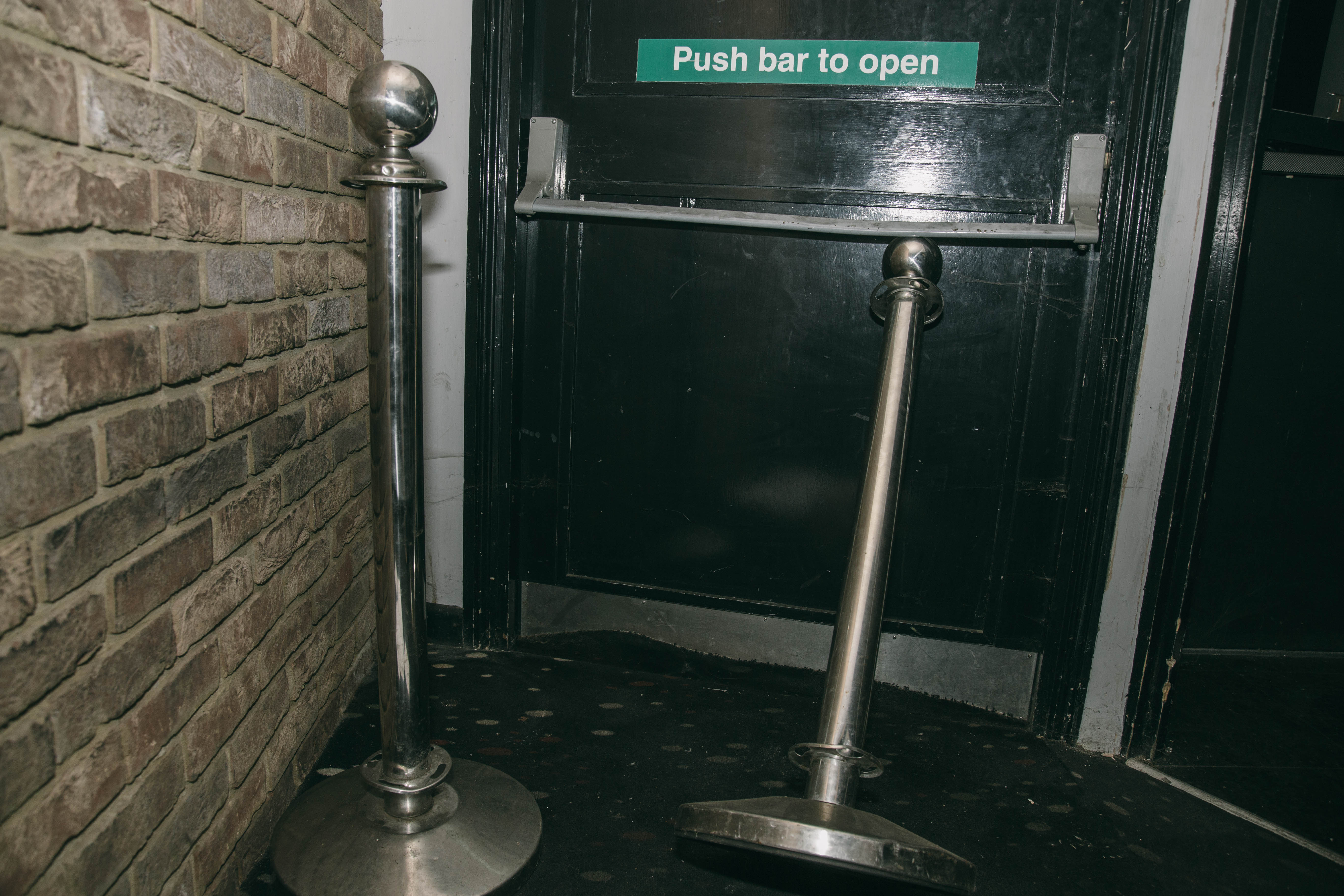 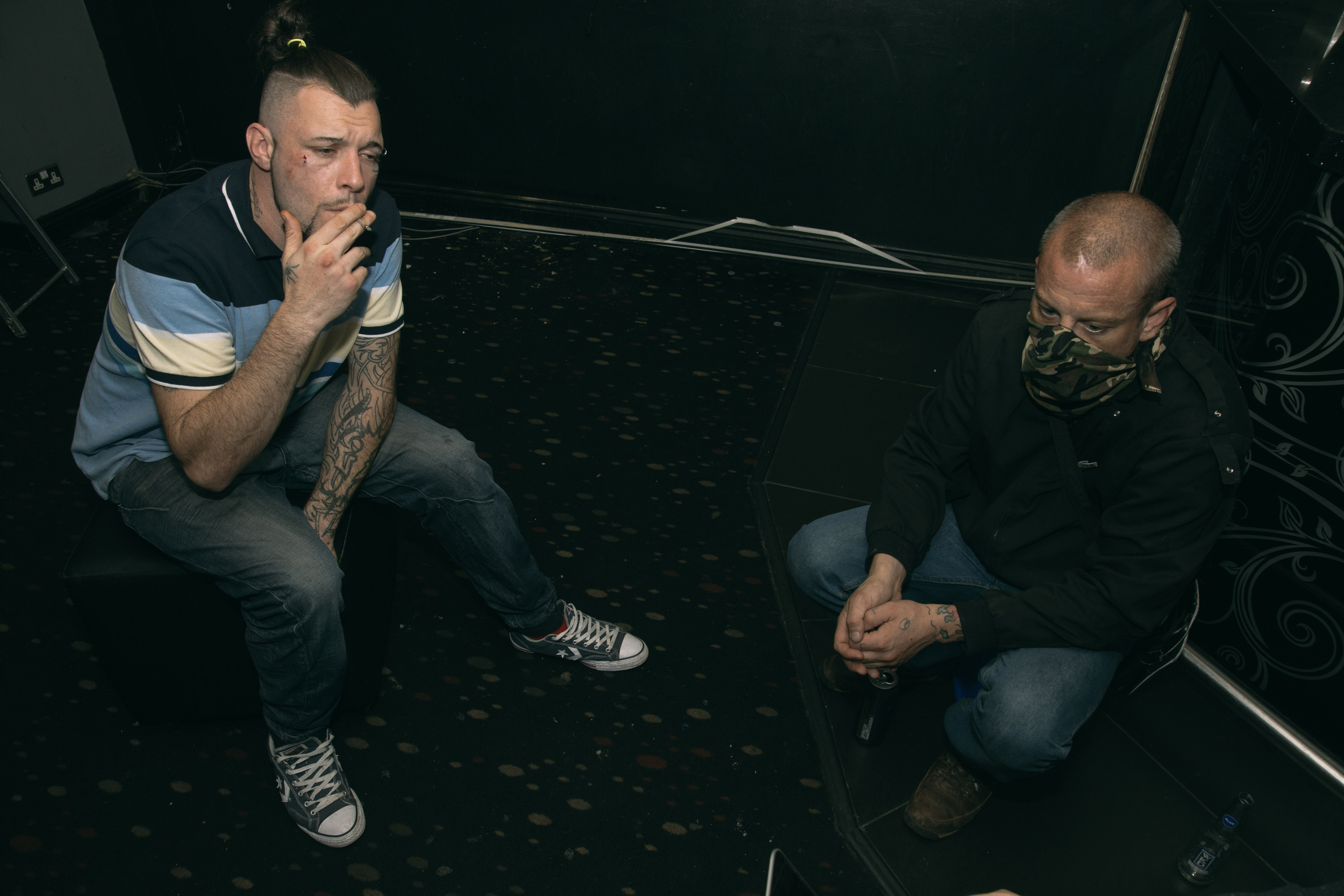 As we’re getting ready to leave, Lum asks us to come back in a few days to see how well they’ll have spruced up the place. Both he and Darren are eager to dispel the negative stereotypes around squatters and homeless people in general. “The stigma around homelessness needs to change,” Darren says. “Being homeless doesn’t have to be sitting in doorway stinking of piss. I’m homeless but I take pride in myself.”

Darren has served multiple stints in prison for stealing cars and other offences – although he’s been on the straight and narrow for a while now. He’s certainly not the cuddly activist people can easily get behind – and a sizeable chunk of the public reaction has been negative – but he’s doing what he can to bring attention to Southend’s homeless and has gained a rare platform to highlight issues most of us would prefer to ignore.

Before we walk out the door and away into the night, Lum asks me to turn off the recorder. He lets me in on the next property they’ve targeted, and the buzz could be even bigger than the BHS building. You’ll just have to watch this space.

Linkedin
RELATED ARTICLES
OTHER ARTICLES
Activists and campaigners are fighting back against new laws that would seriously undermine the ability to take industrial action, calling it an attack on fundamental workers' rights.
After a two-year hiatus and a new album, the Nigerian artist is riding high. Now, he wants to bring his alternative, genre-bending sound to the world.
After blocking the Scottish government’s gender recognition reform bill, Westminster is now devising further changes to the law to make it harder for trans people to self-identify.
Yohon Tatum, aka Legendary Father of the House of Tisci, reflects on nurturing a new generation of talent.
A new film from Berghaus traces the story of Adam Raja, who left behind a turbulent upbringing to discover the healing power of climbing.
The first-generation graffiti artist reflects on the tagging’s emergence as an art form and the players who pushed the medium forward.