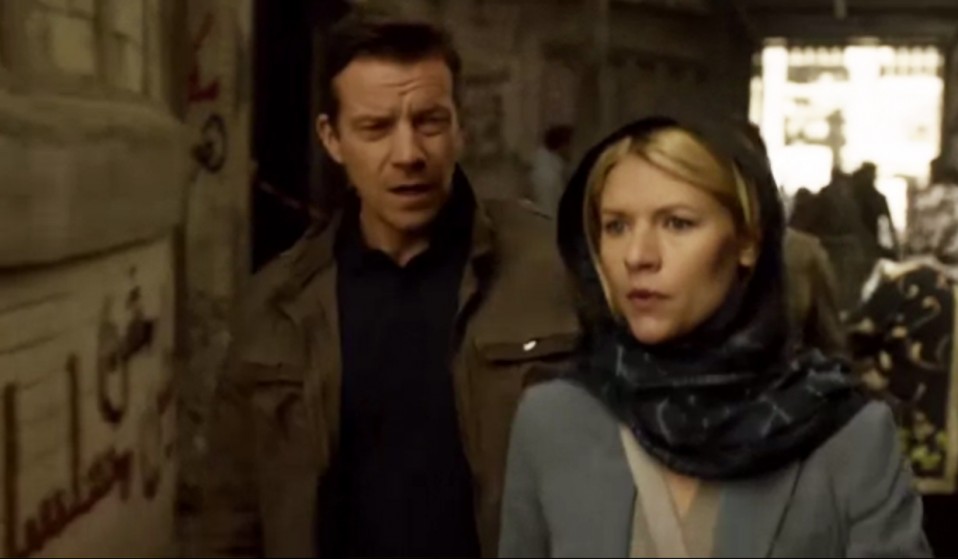 Artists Heba Amin, Caram Kapp and Stone cover Homeland’s set with slogans that mock the show’s inaccurate and damaging portrayal of the Middle East and War on Terror.

Artists Heba Amin, Caram Kapp and Stone cover Homeland’s set with slogans that mock the show’s inaccurate and damaging portrayal of the Middle East and War on Terror.

As former CIA Agent Carrie Mathison leads German oligarch Otto Düring down an alley in a Syrian refugee camp, they pass an unassuming piece of graffiti in Arabic. Like most viewers, the network which aired this episode of the popular series Homeland on primetime TV, missed its significance. But for anyone with a good grasp of Arabic, they could read ‘Homeland is racist’ and see slogans mocking the show’s comically inaccurate portrayal of the Middle East peppered across the show’s set.

Street artists Heba Amin, Caram Kapp and Stone answered a call for “Arabian street artists” to help the show’s producers make their Syrian refugee camp set in Berlin look more authentic. Aware of the show’s reputation for its damaging portrayal of Muslims, initially they were skeptical, “until we considered what a moment of intervention could relay about our own and many others’ political discontent with the series,” they write in a statement on Heba Amin’s website. “It was our moment to make our point by subverting the message using the show itself.” 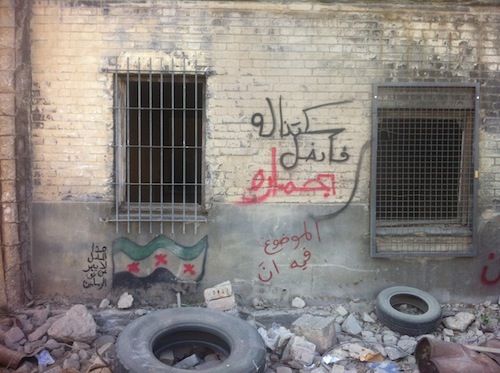 Top: we didn’t resist, so he conquered us riding on a donkey. Bottom: The situation is not to be trusted. Left: This show does not represent the views of the artists (photos courtesy of the artists)

If you haven’t watched the show, its grasp of the War on Terror and representation of Muslims and the Middle East is just a tiny degree less ridiculous than Team America. The plot is fictional, but misrepresentations such as Iran’s support for Al Qaeda in the show have been lapped up by the American public and even repeated on mainstream media. After five seasons, the artists argue, “the plot has come a long way, but the thinly veiled propaganda is no less blatant.”

In an age where so much mainstream entertainment glamourises conflict, sensationalises supposed threats and further embeds negative stereotypes, Huck asked Caram how we can we increase understanding of the Middle East, Arab culture and detoxify the narrative around the War on Terror. “We could question the image of an enemy ‘other’, created by a constant narrative of terror, war, images of extremists and burned flags in mainstream entertainment and news media,” he explains. “Rather than accept these as a fact of life, personal research and interactions can much influence perspectives and help develop a frame of mind in which a global society – which is so frequently proclaimed – is not an imaginary construct, but a way of life and understanding.” 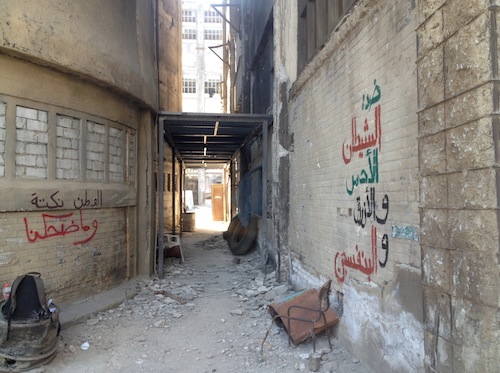 Right: against the red, blue and purple devil (A Muslim Brotherhood reference made by an Egyptian general on Television in 2013)
Left: Homeland is a joke, and it didn’t make us laugh (photos courtesy of the artists)

The street art trio condemn the show for “maintain[ing] the dichotomy of the photogenic, mainly white, mostly American protector versus the evil and backwards Muslim threat.” In standard Hollywood style, when white characters such as Carrie Mathison shoot to kill, they’re ‘kickin’ ass’ and helping to keep America safe, but when their Arab foes use the same techniques they’re presented as an evil scourge.

They call Homeland out for, “Garner[ing] the reputation of being the most bigoted show on television for its inaccurate, undifferentiated and highly biased depiction of Arabs, Pakistanis, and Afghans, as well as its gross misrepresentations of the cities of Beirut, Islamabad – and the so-called Muslim world in general.”

Huck asked Caram what effect he hoped their intervention would have on Homeland viewers and the team that makes the show. “We hope that Homeland’s viewership will learn that the entertainment they are taking in is just that – entertainment,” he explains. “[That it’s] not a representation of the actual world, in which both the actions of the extremists the show so frequently depicts and their counterparts in the CIA, endanger and devalue the ways of life of a much larger population, both in the US and in the Middle East and SEA region. The crew will probably feature a couple of evil graffiti artists in an episode sometime next season, but we do hope they will interact a bit more with the subject matter they are dealing with and learn from it.”

Time will tell how much impact this artistic intervention has on Homeland, but being embarrassed so publicly on primetime TV might just prompt the show’s producers to do their homework in future.

Note: This article was amended on October 15, 2015 to include quotes from Huck’s interview with Caram Kapp.

Linkedin
RELATED ARTICLES
OTHER ARTICLES
Last week, Tower Hamlets council removed its nudity-restricting licensing conditions in a huge win for London’s kink community.
From the early originators to the female writers at the forefront of today’s scene, we talk to the artists redefining graffiti’s consciously macho origins.
A series of photos by the late Jerry Dantzic taken in 1957 show a tender side to the iconic Jazz musician.
We introduce our series spotlighting the voices of people who’ve been impacted by anti-abortion laws and anti-choice protestors.
One year on from the fall of Afghanistan to the Taliban, Tiara Ataii speaks to those who have been forced to make the treacherous journey to Europe for safety, and the barriers and horrors they have faced.
A new series of photos by Johny Pitts shines a light on communities and subcultures that have all too often been overlooked.