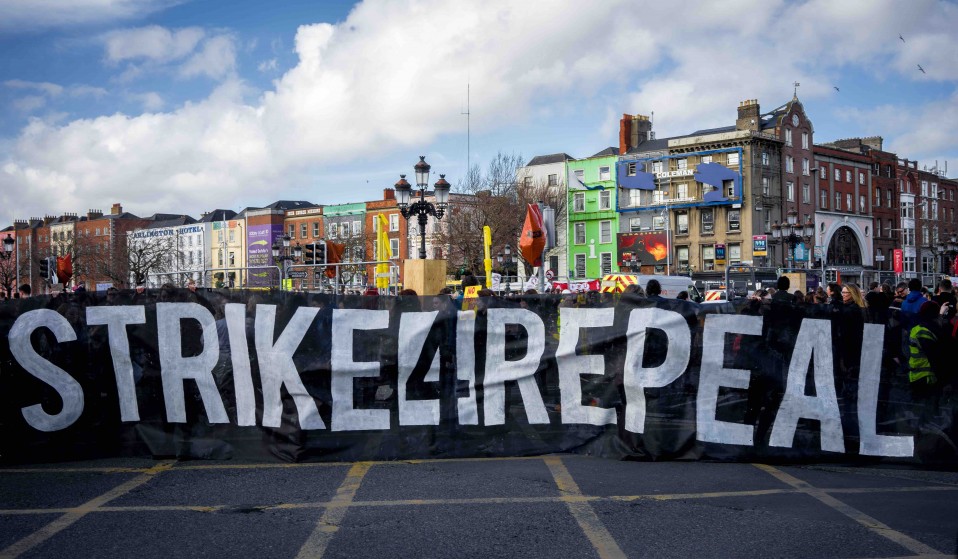 This International Women's Day, Irish women donned black, went on strike and marched in protest, to demand a change to Ireland's archaic and restrictive abortion laws.

Trinity College Dublin is a sea of black today. Everywhere you turn, students are sporting their trademark black graphic REPEAL jumpers, long black trench coats and goth boots. Lightning bolts adorn their bodies in various forms – in badges and facepaint – and litter the streets of Dublin city: spray painted on tarmac and stuck to lampposts everywhere you look.

These bolts symbolise the shock that activists hope to deliver to the Irish establishment today by implementing a nationwide withdrawal of women’s labour. 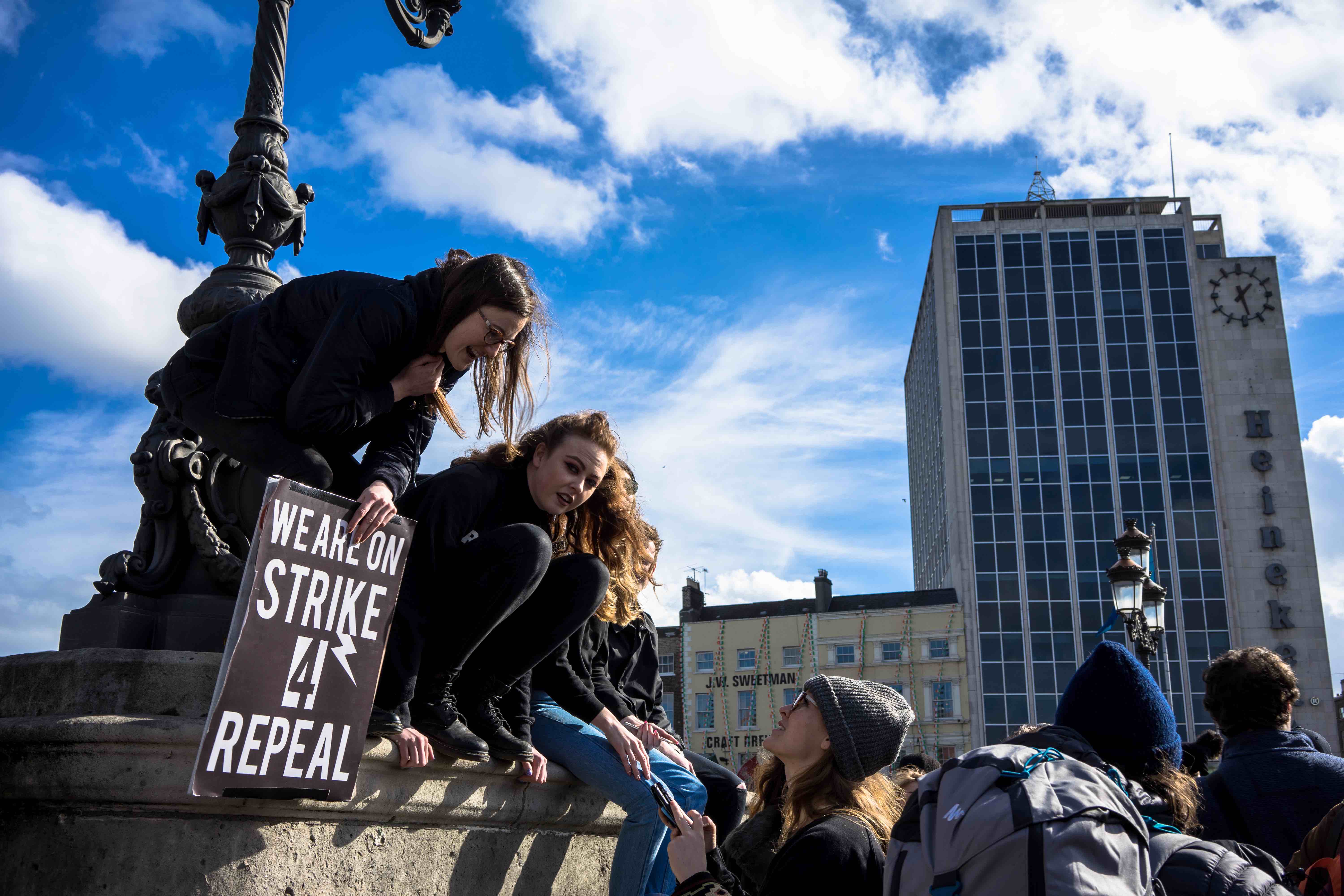 The black attire represents grief for the suffering of Irish women, today’s blackout of the economy. The national Strike 4 Repeal campaign aims to force a referendum in order to overturn the 8th amendment to the constitution, which prohibits abortion in Ireland. Today, on International Women’s Day, the campaign’s organisers are encouraging people all over the country to strike from work, wear black, and attend protests.

On the cobbled square in front of Trinity College, students sit cross-legged on the cold March ground. Most of them are barely 20 and have never had a say over the country’s archaic abortion laws, which were introduced in 1983.

There have been referendums on the issue since then, but only to make minor adjustments: provisions to allow women to have abortions abroad, or even to allow the distribution of information about such services. But today those assembled are demanding more. 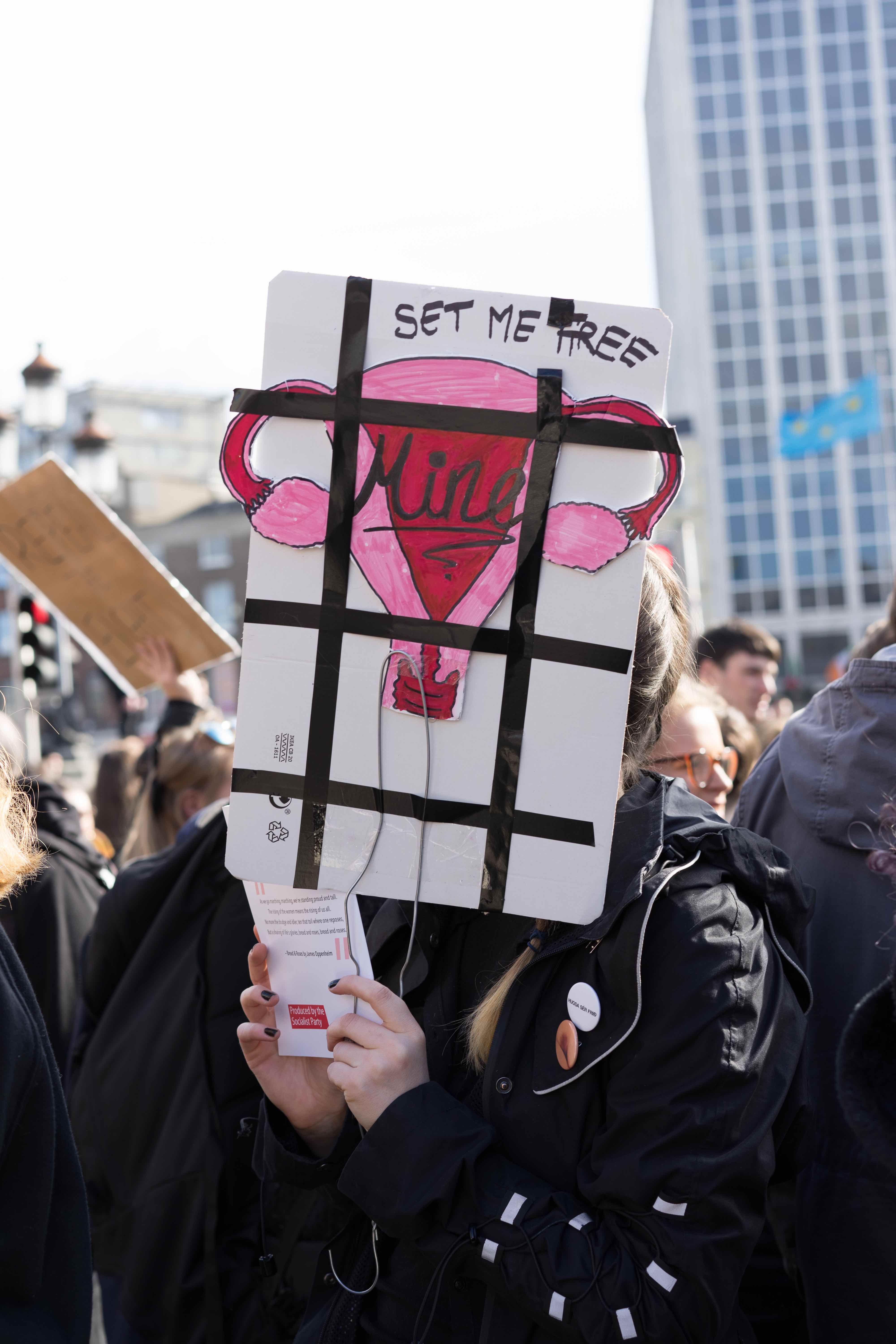 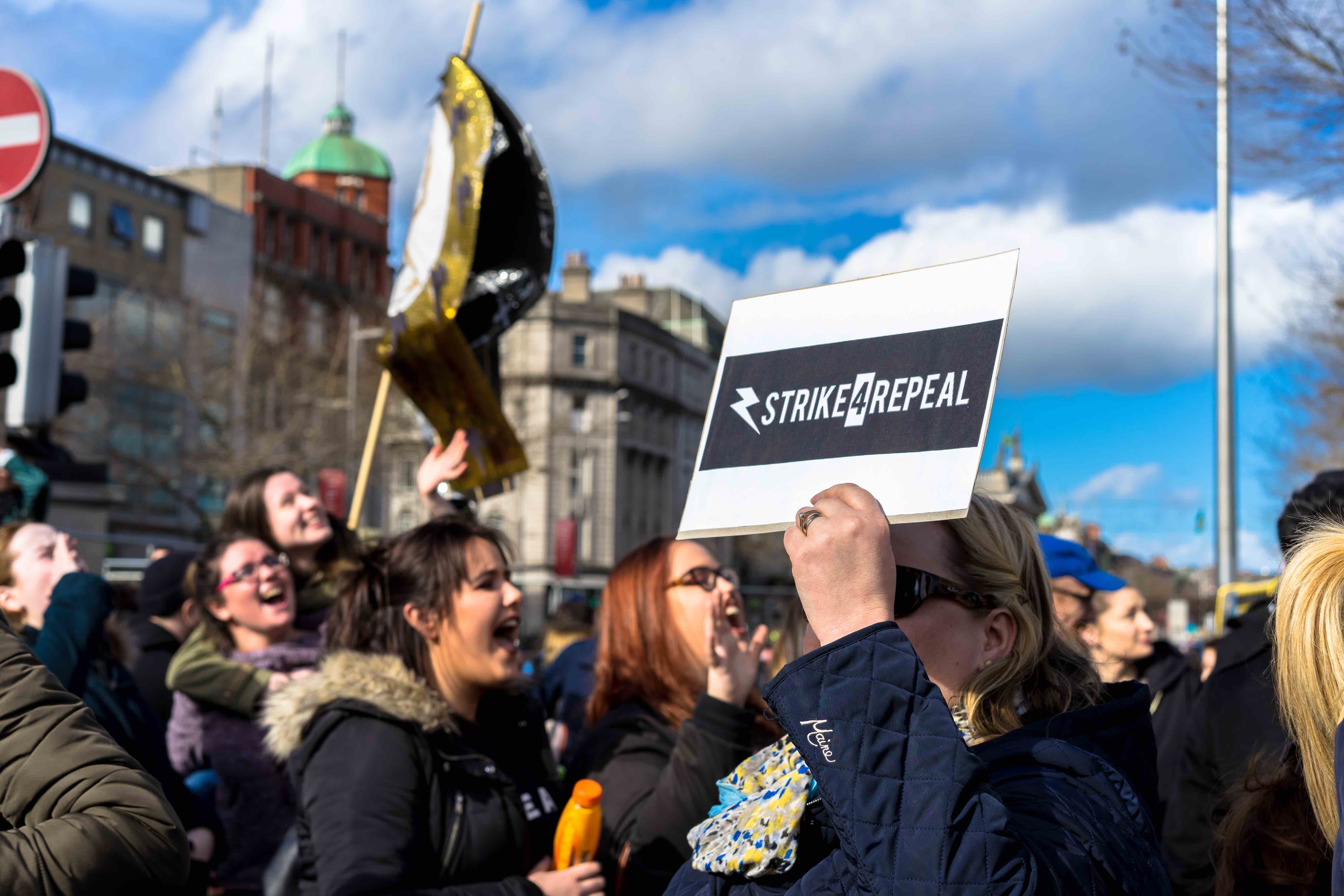 The Abortion Rights Campaign reports that on average 10 women a day travelled to Britain from Ireland to access abortion services in 2014, effectively outsourcing the “abortion problem” to the UK, critics argue.

Amnesty International maintains that Ireland is violating international human rights law by abdicating responsibility, while many UK abortion clinics are now turning Irish women away because they are at capacity. Soon, Irish women will have nowhere left to turn.

Strike for Repeal organiser Claire Brophy lays it out clearly. “We’ve tried everything else,” she tells me. “Still, the government is delaying. It’s as clear as anything that people want a referendum. We’re not asking them for abortion; we’re just asking them to ask the question to the people.” 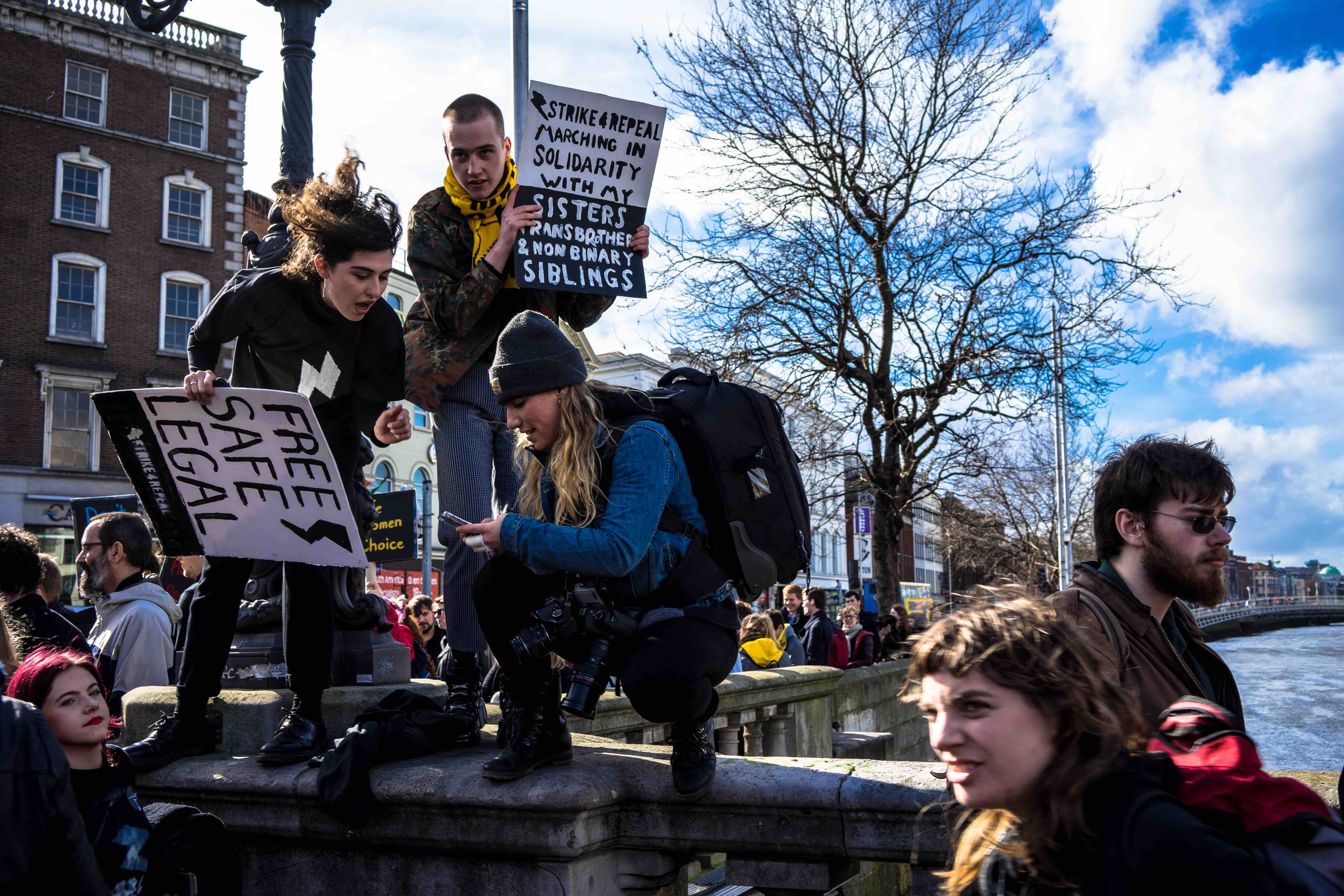 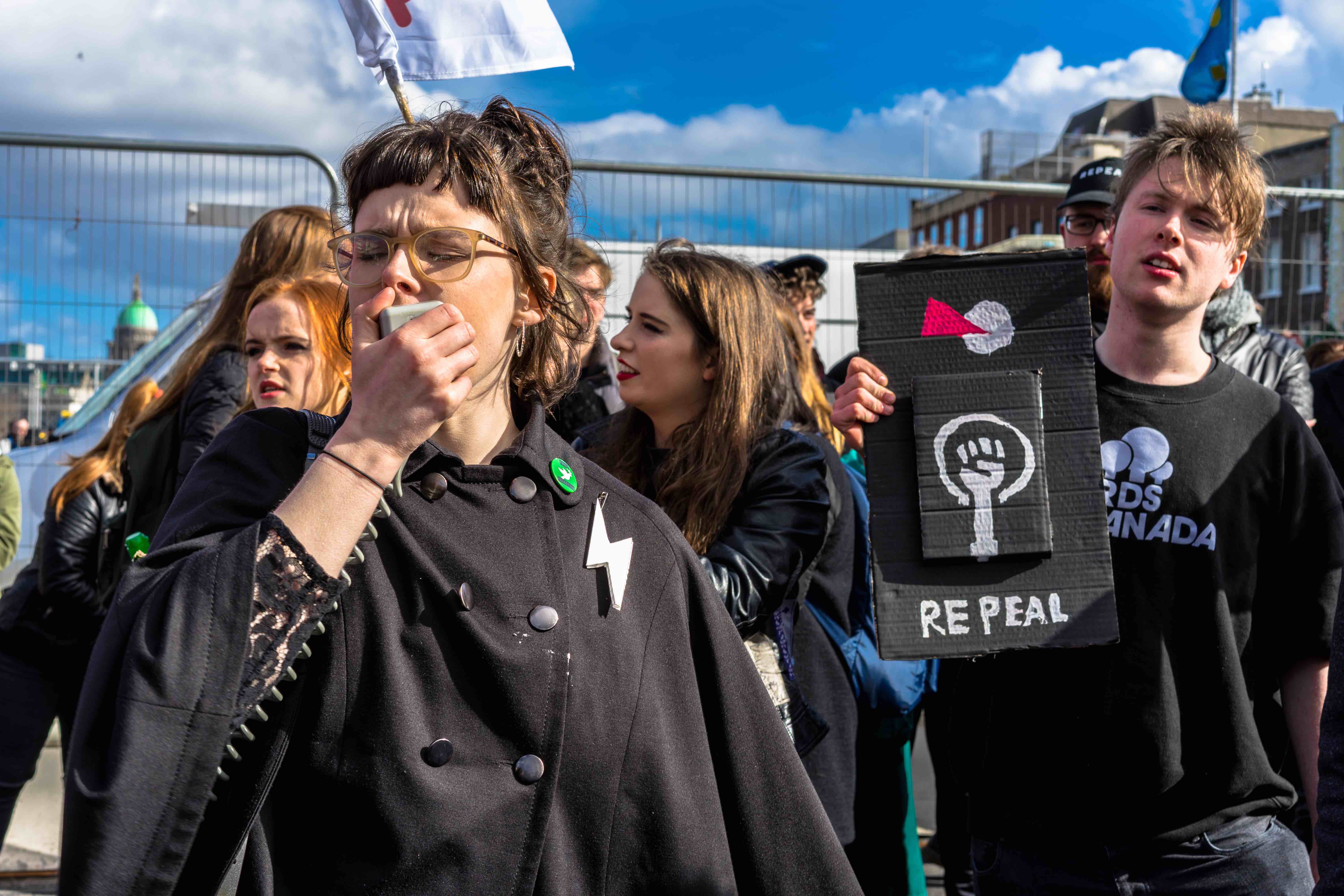 “We have one demand,” she states simply. “Just call a referendum.”

“The Students’ Union is backing the strike because the majority of the students we represent have never voted on this issue,” explains Kieran McNulty, the President of the Student Union at Trinity. “They need to have a say.” Before long, he’s moving again, attempting to herd a group of black-clad students through an arch in front of me.

Eventually, his efforts pay off: a train of students snake their way to O’Connell Bridge, where everyone is set to gather. Progress is slow, but the atmosphere is lively.

Repeal is one of the most talked about issues for young people, and has been the subject of debates and conversations on campuses for months. Most young marchers have changed their profile pictures on Facebook today to a simple black square with a white lightning bolt. 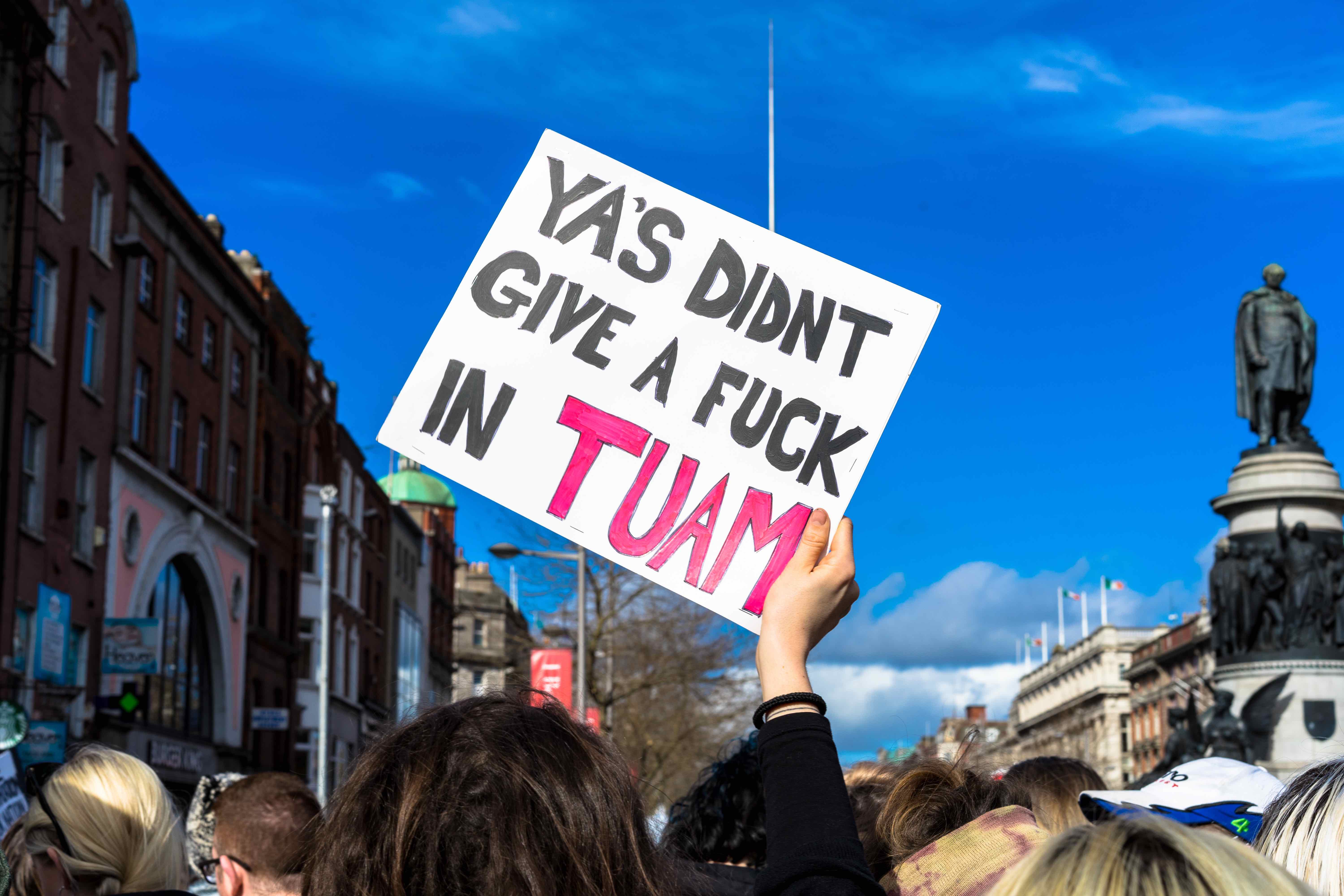 Hidden in the crowd is the LGBT society’s delegation, and I head over to see if anyone will talk. “As a trans man who has sex with men, pregnancy would put a massive target on my back in a world where I’m supposed to be as invisible as possible,” says Felix O’Connor. “Access to abortion is often a life or death issue for trans people who were assigned female at birth.”

On the bridge, an excited energy is building. Students and young people with megaphones scream chants with fiery enthusiasm: “NOT THE CHURCH, NOT THE STATE, WOMEN MUST DECIDE THEIR FATE,” rings out loudly for all to hear.

But this is not only a young person’s issue. Amidst the sea of young students stand Roisin and Ro, two women who explain that they’ve campaigned for abortion rights for decades, but have seen virtually no change in Irish law. 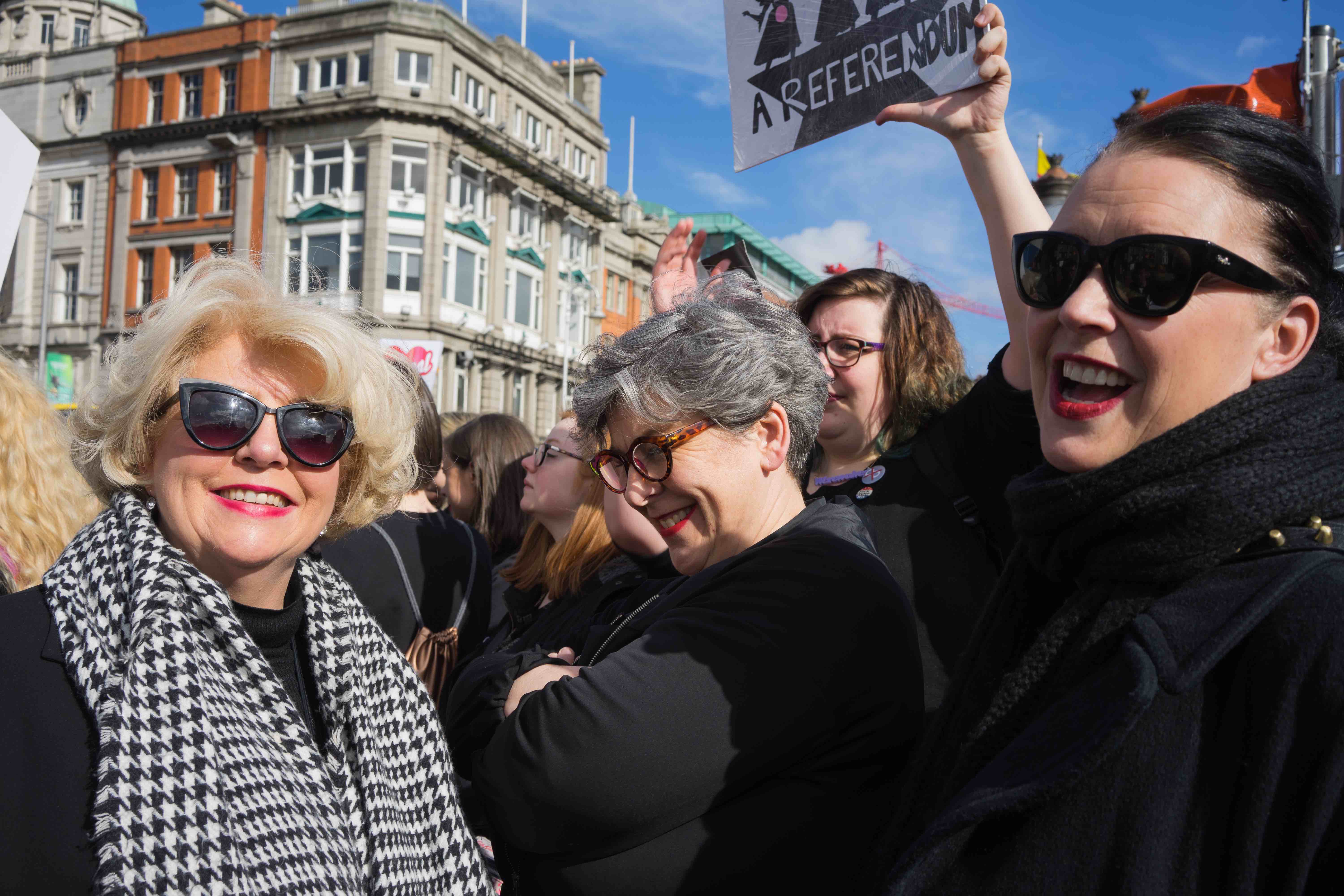 “I remember protesting about the X Case back in 1992, being locked inside the Mansion House with all the pro-lifers outside calling us Protestants,” Roisin recalls. She’s referring to the case of a 14-year-old girl, X, who became pregnant after a statutory rape and was almost prevented from leaving the country to procure an abortion.

Ultimately, the supreme court ruled in her favour, and a woman’s right to abortion if her life was at risk due to pregnancy was established by court ruling. This was cemented by legislation in 2013 after the tragic death of Savita Halappanavar, who died from pregnancy-related complications after being refused an abortion.

“It’s ridiculous that we still have to do this,” Roisin says. “I have two daughters. I don’t want them to have to go abroad if they need abortions.”

Other women marching today are concerned for their children too. Aoife Cox is 36 and has brought her children along with her to march. They’ve scribbled their own makeshift slogans on signs they carry with them, and peer curiously around the crowded bridge, taking everything in. 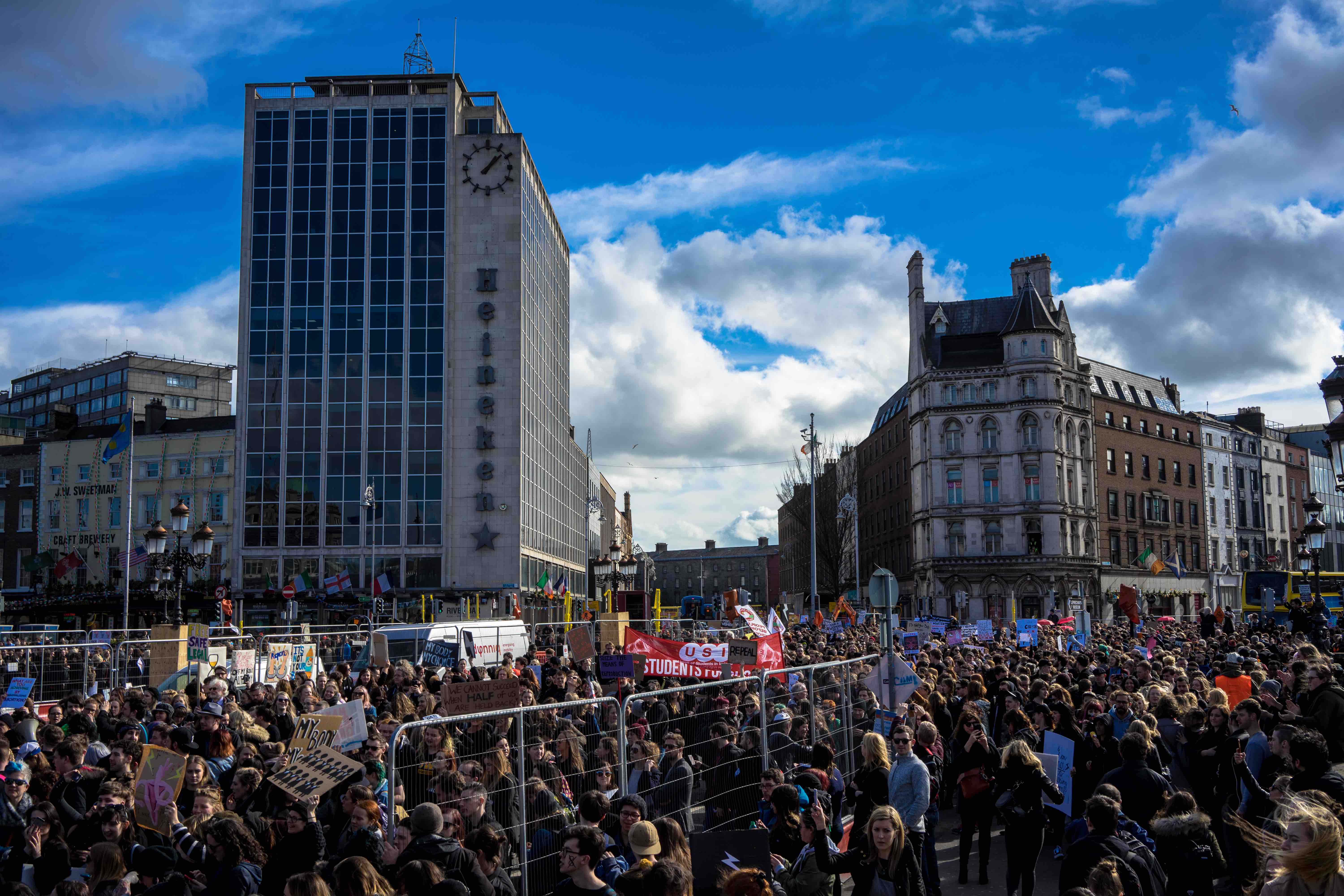 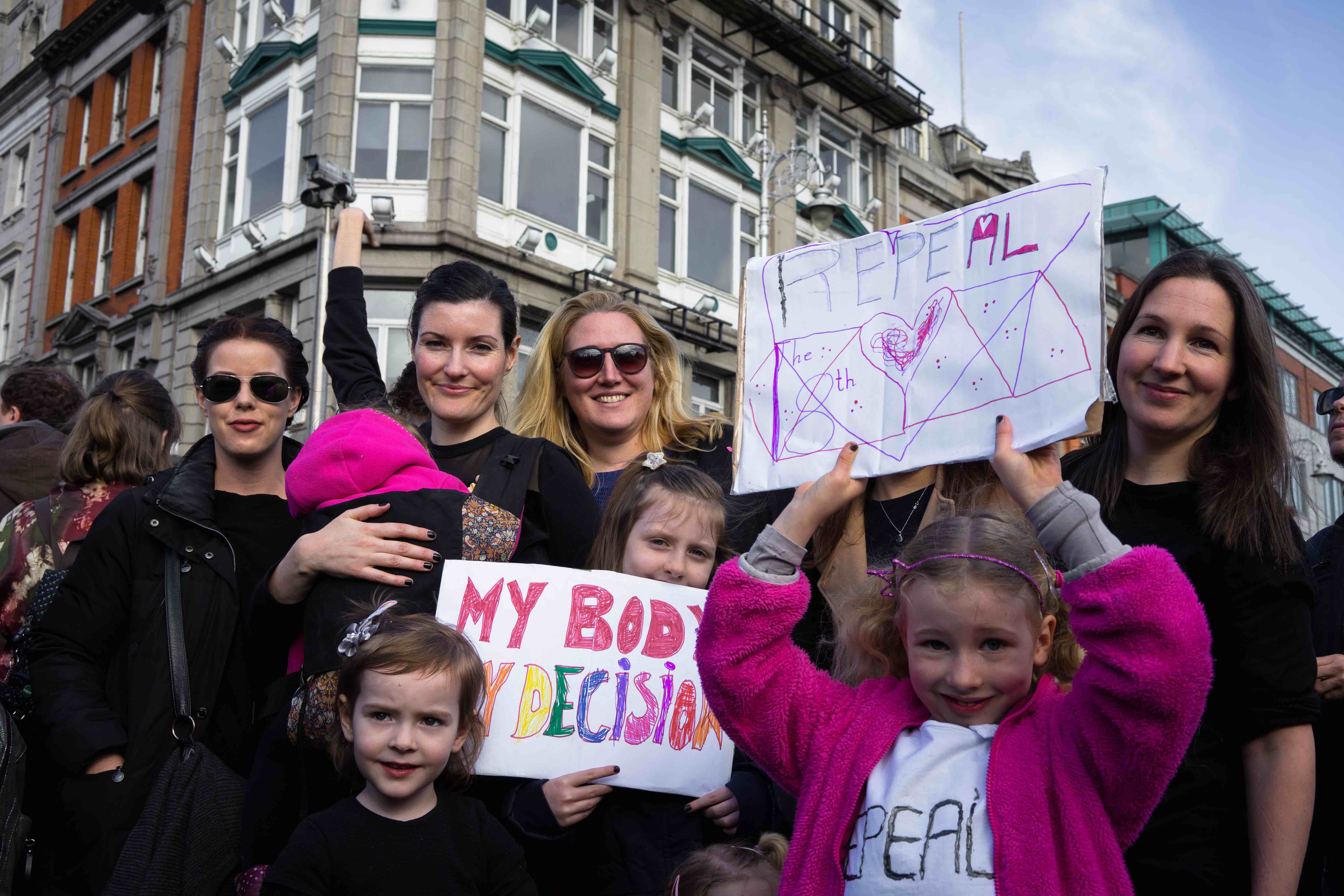 Aoife Cox and her family

“I have three daughters,” says Aoife. “I want them to have choice. I’m striking for their future.”

The government in Ireland is currently holding a Citizens’ Assembly, where 100 ordinary citizens convene to hear expert testimony, this time on the issue of abortion. “Their conclusions will form the basis of a number of reports and recommendations that will be submitted to the Houses of the Oireachtas for further debate by our elected representatives,” says the Assembly’s official website.

For Irish women, this is yet another delaying tactic from an apathetic government, while the government maintains that it needs more time to determine a “consensus” on the issue. Many fear this consultation process is simply an attempt to delay and delay so that this administration won’t have to deal with it. 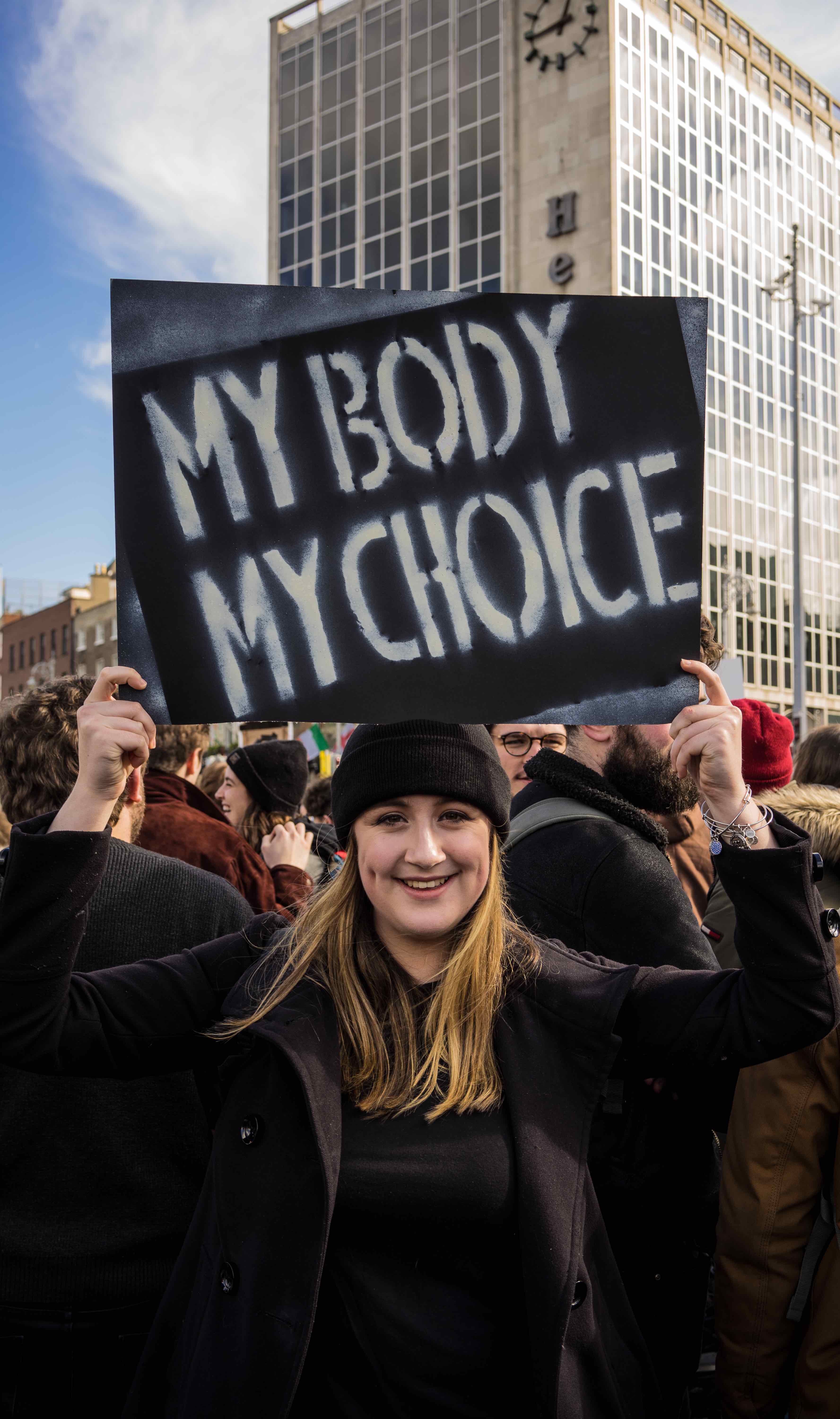 “The government is too lax about it,” says Kate Hanniffy, who studies in Dublin and has skipped lectures to attend the march. “They need to realise that it’s an urgent issue that’s ruining the lives of women, non-binary people and trans men all over Ireland.”

Linkedin
RELATED ARTICLES
OTHER ARTICLES
We introduce our series spotlighting the voices of people who’ve been impacted by anti-abortion laws and anti-choice protestors.
Following the release of his latest album, the rapper talks about finding a new approach to songwriting, attitudes to poverty, and why his music is more than a political statement.
A new series of photos by Johny Pitts shines a light on communities and subcultures that have all too often been overlooked.
Last week, Tower Hamlets council removed its nudity-restricting licensing conditions in a huge win for London’s kink community.
A young woman recounts her experience of being harassed by anti-choice campaigners as she was seeking an abortion in Glasgow.
From the early originators to the female writers at the forefront of today’s scene, we talk to the artists redefining graffiti’s consciously macho origins.