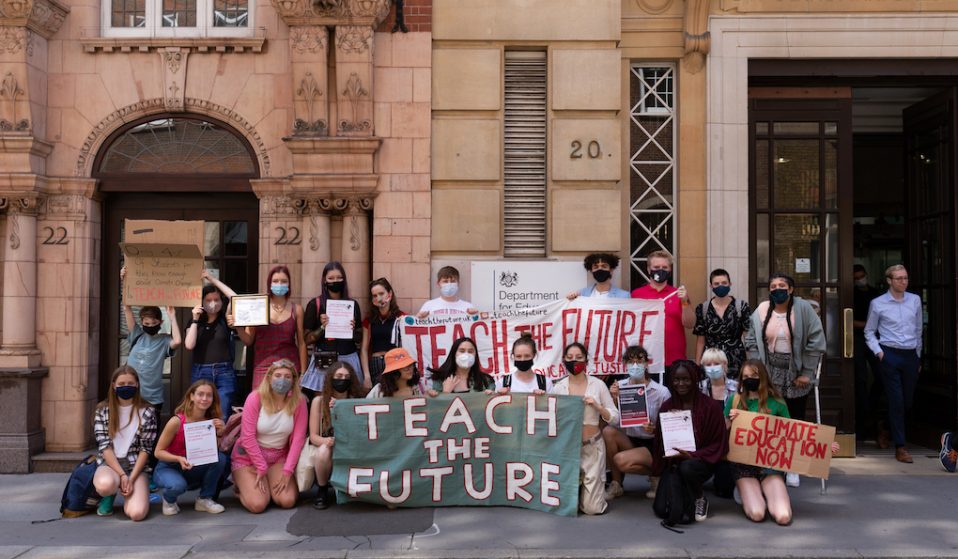 Following the IPCC report issuing its most severe warning on the climate crisis yet, students came together in London to demand government action.

Following the IPCC report issuing its most severe warning on climate yet, students from across the country came together outside the Department of Education to demand urgent action over a curriculum which is failing to address the current crisis.

This week, students across the country receive results for their A-Levels and GCSEs. At each level this cohort of students have borne the brunt of the pandemic, with almost all of the previous two years of teaching taking place in the shadow of Covid-19.

Last year, students who’d seen their final months of teaching and preparation for exams overturned by the pandemic demonstrated in their thousands to against a controversial algorithm which saw 40 per cent of students see their grades marked down. The protests, which attracted national press attention and widespread calls for the resignation of education secretary Gavin Williamson, led to a humiliating U-turn for the government.

This year, students once again took to the streets outside the Department of Education to demonstrate on 11 August, this time, on the subject of the climate. As well as being the week young people across the country receive their results, it has also been the week in which the UN’s International Panel on Climate Change (IPCC) have released their latest report. 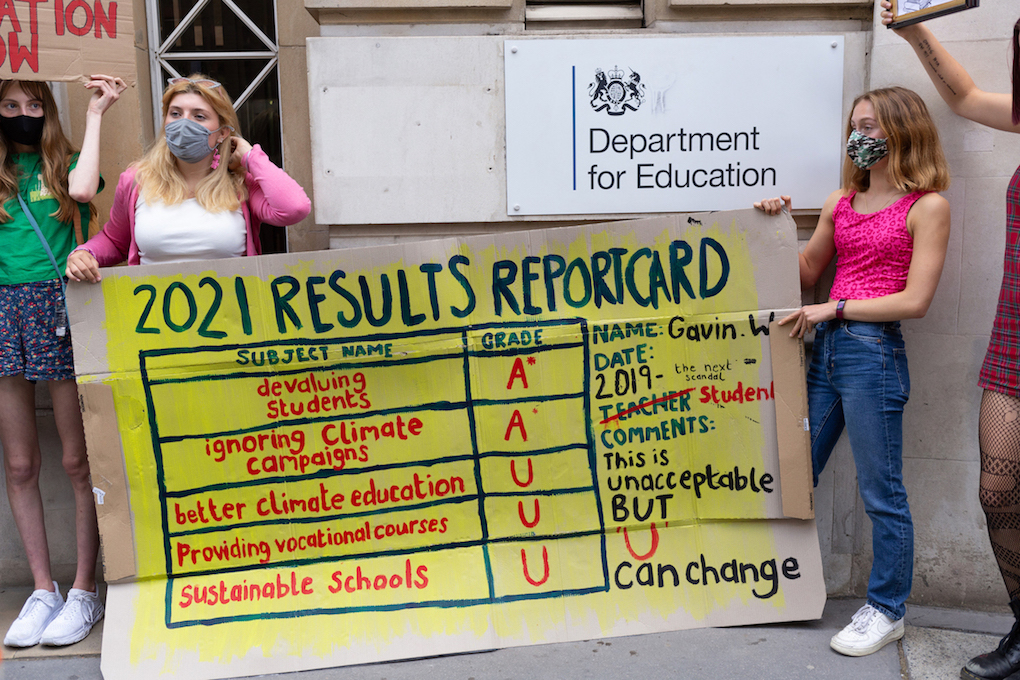 In 2018, it was the IPCC report which warned that the world only had 12 years left to act to avoid irreversible and devastating climate change. This week’s report was the IPCC’s most severe warning yet, stating that this was “code red for humanity” and that the time left to act was nearly over. It was in this context that students from Scotland to Sussex came together in Westminster.

Chloe, an 18-year-old student from Solihull, told Huck: “It’s so obvious what the impacts of climate change are going to be as the IPCC report has shown this week, and as we are currently in education we know what is lacking. As someone who has just finished their A-levels, I feel woefully unprepared to face a future that will be littered with climate inaction.”

For 17-year-old Thiziri from Malvern, the message students were sending to the government was clear: “I’m here today because I believe the department of education has completely failed to address climate education. Our curriculum totally lacks comprehensive climate education and it’s not acceptable considering how we are accelerating into climate breakdown.“ 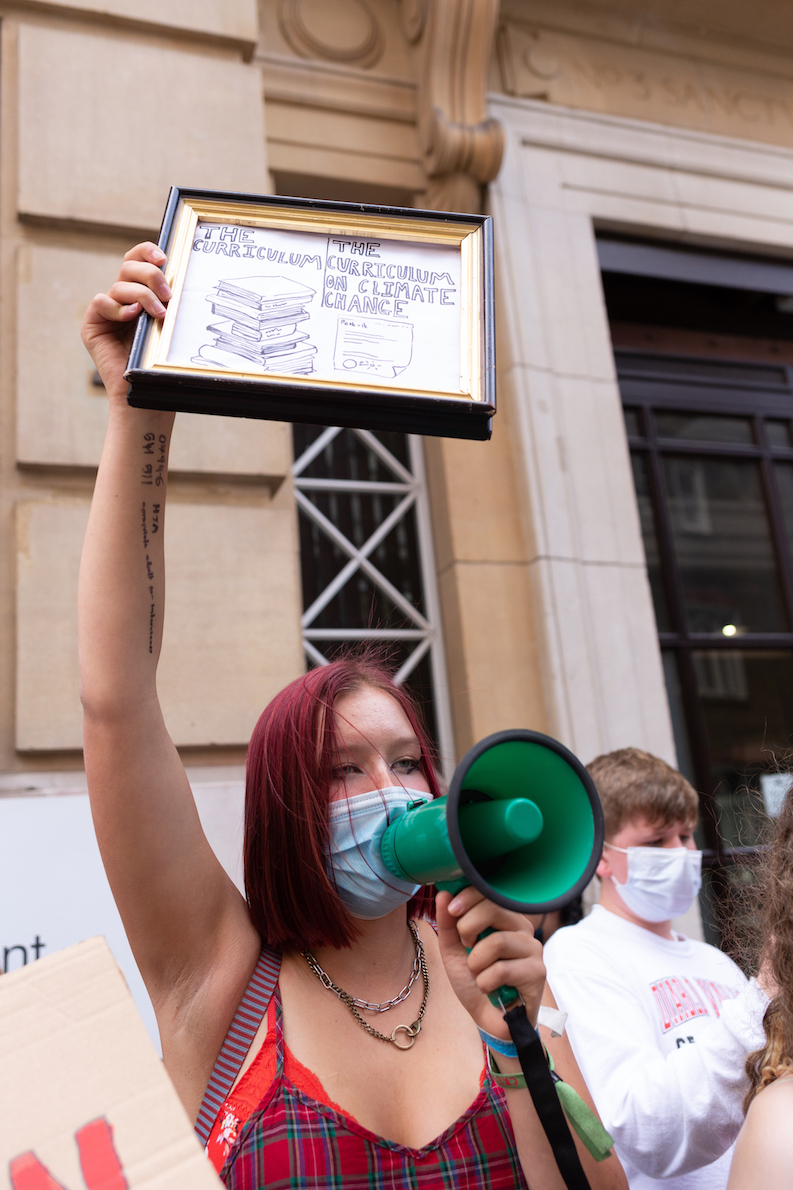 Scarlet, age 17, from the West Midlands, told Huck: “The Department for Education has treated students with nothing but contempt; whether that’s screwing over students with exam results that favour the privately educated elite, or a failure to incorporate climate education into the curriculum, they don’t want to equip us with the knowledge and skills necessary to tackle the climate crisis and build a climate resilient society.”

The students who were part of campaign groups Teach the Future and Youth Strike for Climate had reached out to Gavin Williamson over 20 times asking for a meeting. They had previously held a parliamentary reception with over 100 MPs and Lords in attendance, but still had not received a response from the Education secretary.

“We have taken our fight to his doorstep,” Scarlet told Huck. “He may ghost emails, but he can’t ignore students from all over the country. As he has been grading us on our exam performance over the last year, we’ve graded him on his performance as DofE Secretary. We also had speeches about climate education and read from Teach the Future textbooks outside the building, doing the jobs of those inside”

The protests drew support from many including former leader of the Labour party Jeremy Corbyn MP, who tweeted out his solidarity.

Solidarity with students from @_teachthefuture and @strike4youth protesting the Government’s overlooking of the climate crisis and students at the DofE today. pic.twitter.com/suERzwheGm

On the need for education about the climate crisis, 18-year-old Destiny from London told Huck: “The fact that the climate crisis wasn’t initially our problem but it is now our responsibility means that the burden is on us. If the people in charge aren’t going to equip us with the knowledge we need we are going to take our asks to their doorstep because we need this education. Ignorance kills.” She added: “I hope it’s a wake up call, the government are taking the piss”

For 16-year-old Jude, who came down to the protest from Sheffield, this protest is just the beginning: “We are showing that there’s a lot of young people dedicated to this cause and we are prepared to take to the streets for it. We shouldn’t have to be doing the department’s job for them, but we want things to change and we need things to change.”

The demonstrators delivered a letter to staff at the Department of Education once again asking Gavin Williamson for a meeting. They told Huck they were assured it would reach him. 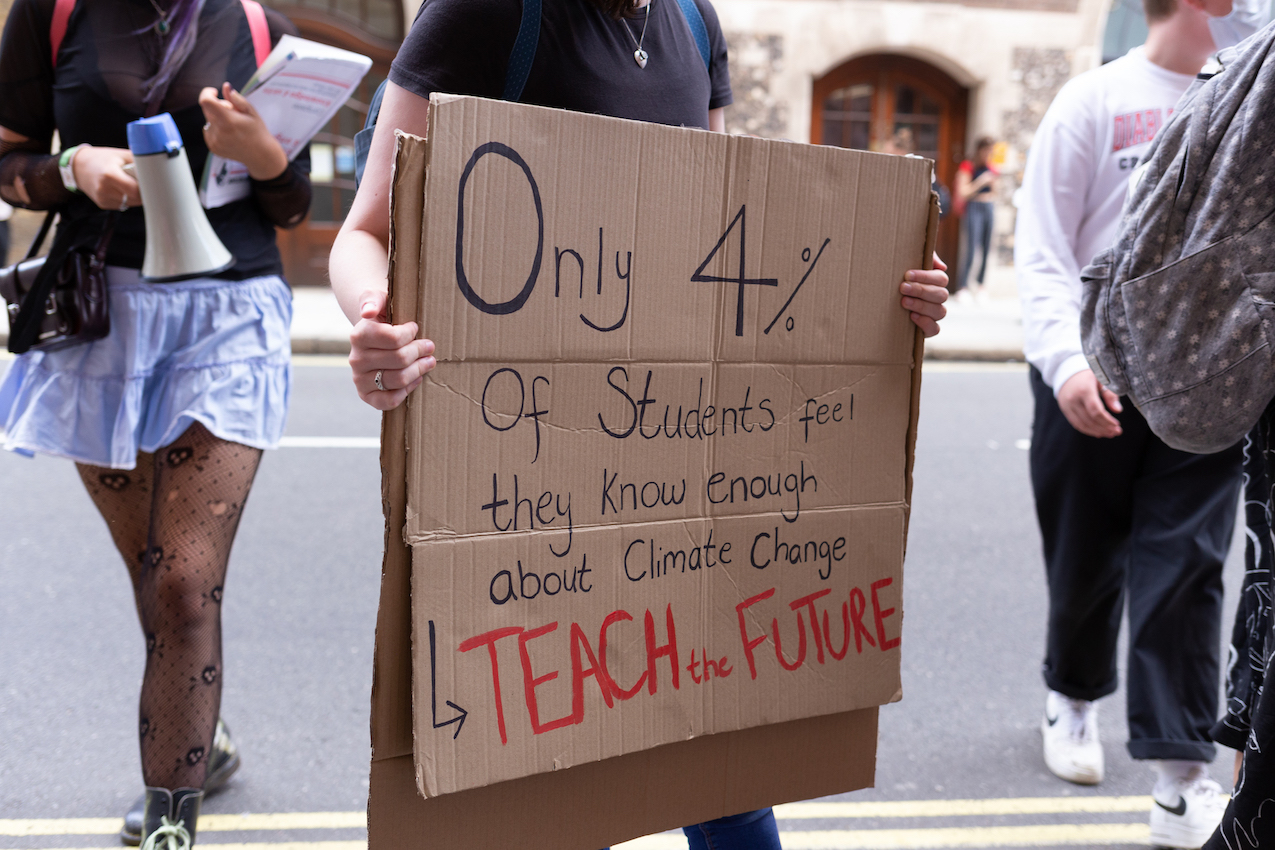 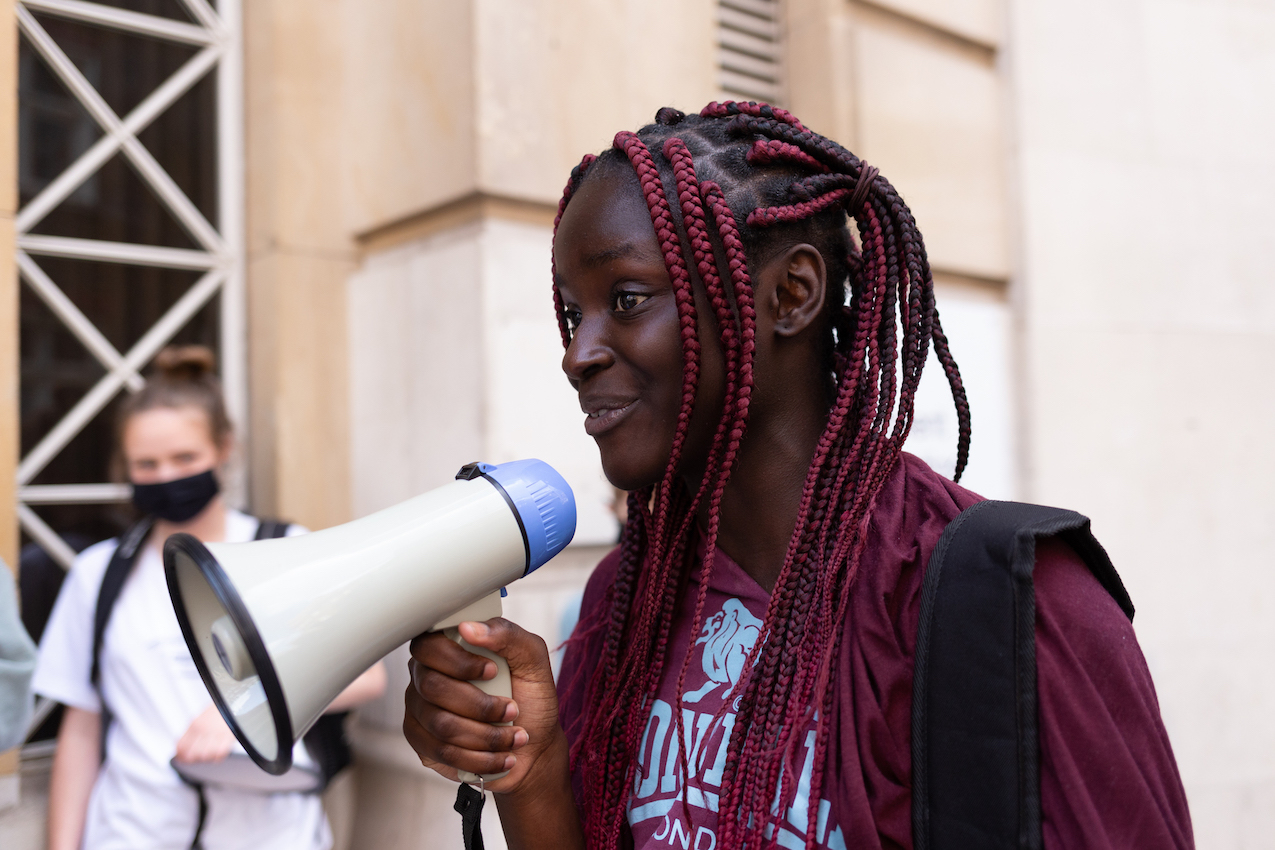 The protest comes as focus on the climate heightens. With COP26 being hosted in Glasgow just over two months away, First Minister of Scotland Nicola Sturgeon has today written to Prime Minister Boris Johnson asking him to “reassess” the proposed Cambo oil field near Shetland after she was confronted by a young activist from new organisation, Green New Deal Rising, this week. Elsewhere, activists from across the country are expected to gather in London in just over a week for another round of action on the climate called by Extinction Rebellion.

As time ticks down towards the tipping point, it’s clear more and more people such as the youth strikers will continue to take to the streets and put pressure on politicians in their attempts to thwart the devastating climate crisis. 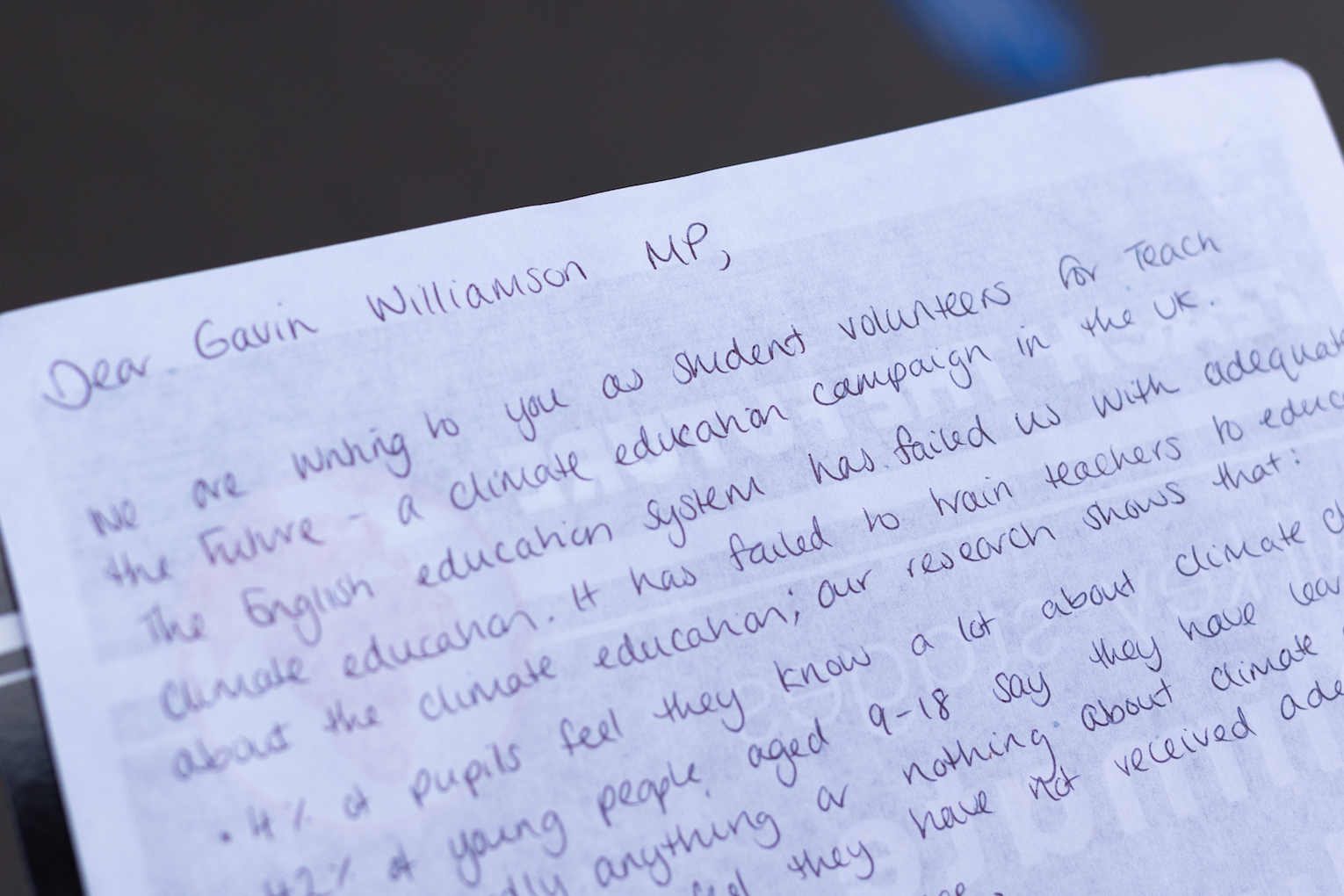 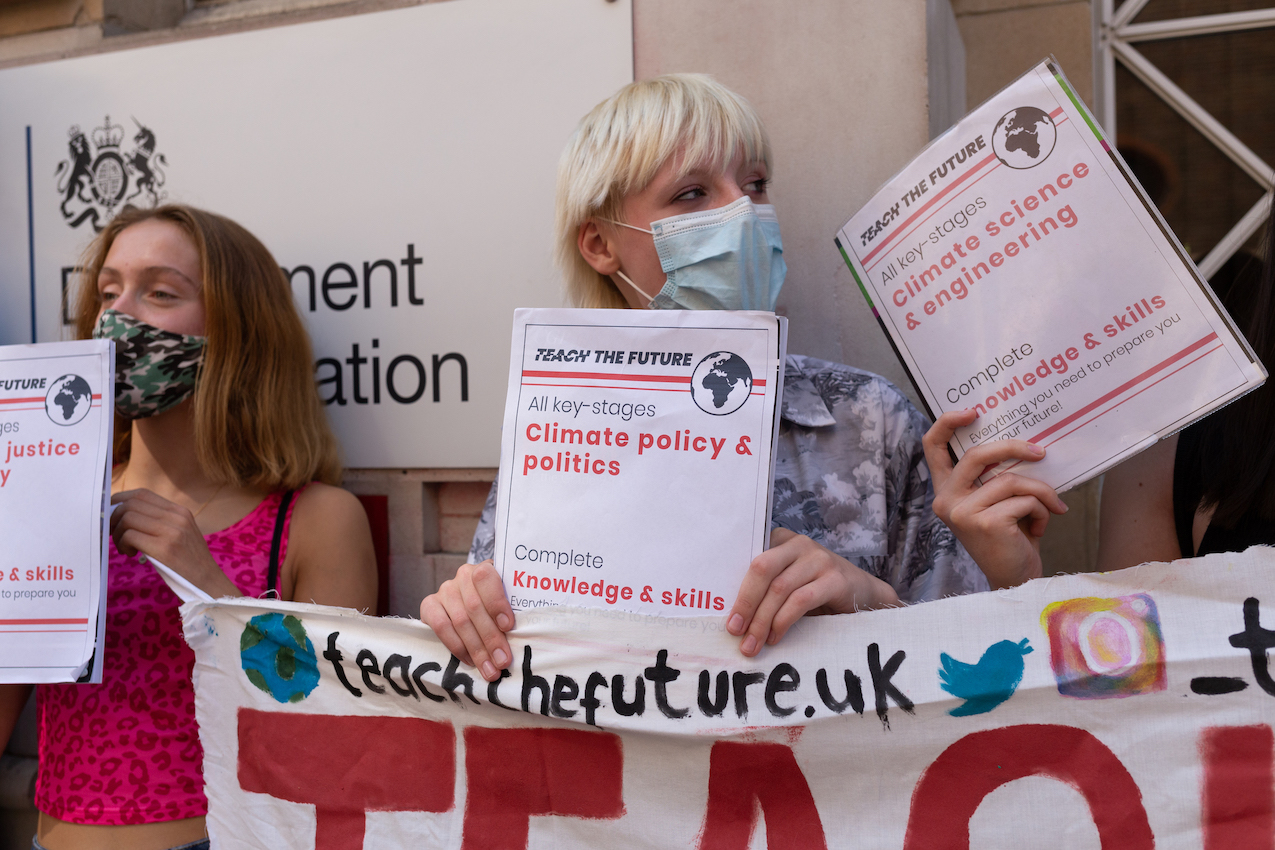 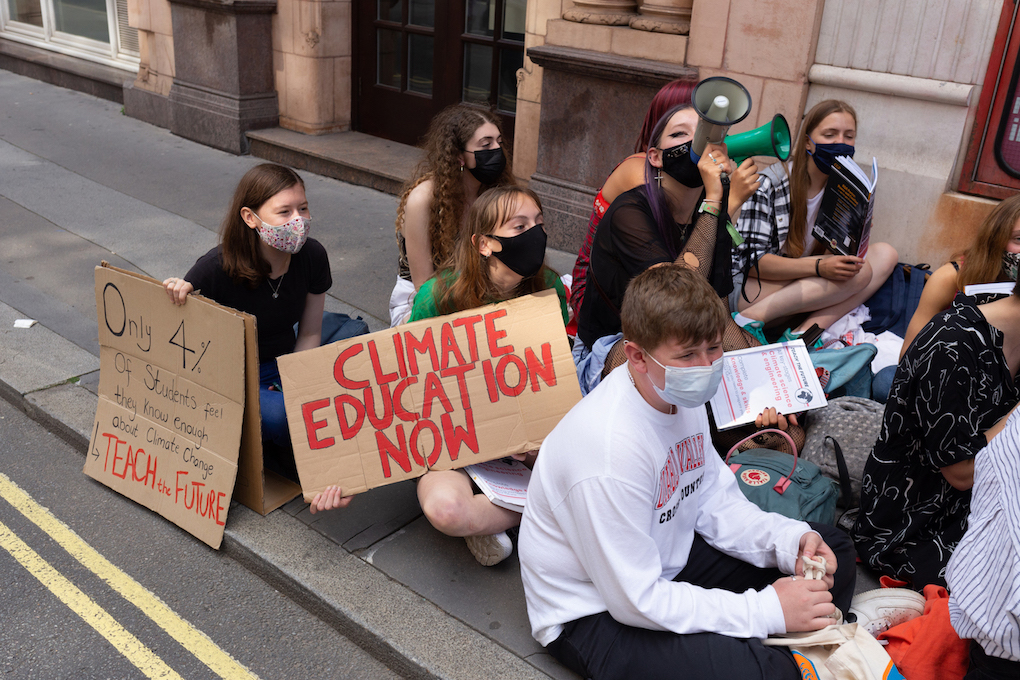 Linkedin
RELATED ARTICLES
OTHER ARTICLES
Thousands attended the annual event this year to wheelie through the city and call for ‘knives down, bikes up’.
Rhiannon Adam spent three months capturing an ageing society wracked by division, isolation, and the aftermath of scandal.
Ahead of the release of their first collaborative album, the producer and rapper talk psychedelics and the state of UK hip hop.
The idea that a younger generation is abandoning work has become a popular narrative online, but it doesn’t necessarily reflect reality.
By turning a real-life crisis into daytime television fodder, TV bosses have once again shown themselves to be completely out of touch with audiences.
Sean Maung’s photos are a love letter to the Black and brown communities that make up New York.