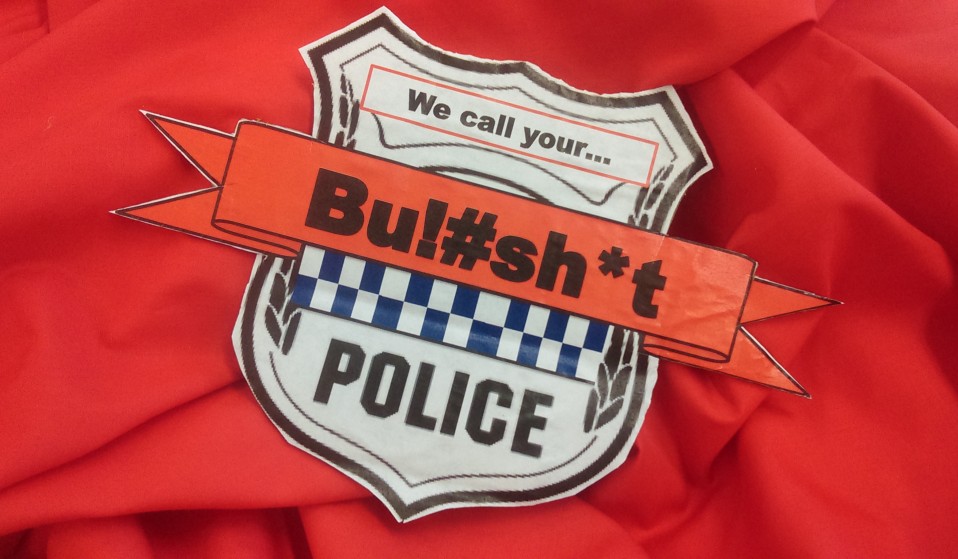 Despite the fact it's pretty much universally acknowledged that climate change is set to destroy humanity and the planet, big oil companies still get away with making billions through screwing up the planet. And guess what? A PR stunt today from the world's biggest conglomerates means absolutely nothing. That's why we turned up outside.

Today we called bullshit on the ironically-named ‘Oil and Gas Climate Initiative’ (OCGI), and its latest greenwashing attempt. The OGCI counts the CEOs of Statoil, Shell, BP, Total and many more of the world’s largest oil firms as its members, and has been using the issue of climate change as a PR tool since 2014.

Today, coincidentally the same day that he Paris Climate Agreement takes effect, the group announced a $1 billion investment over ten years in low-carbon technology. It sounds like a lot, but when you break it down it’s nothing more than a slap in the face to those on the end of climate change’s devastating effects, and those of us determined to avoid a climate change armageddon.

You see, $1 billion from ten companies across ten years means $10 million per company per year. Compare that to Shell’s projected spend in new projects and infrastructure this year, a whopping $25-29 billion, and it’s clear that these companies are part of the problem not the solution.

These executives fundamentally miss the point on how our economy and climate has to and will transform. Leaving aside the stinginess, the loose change pledged in the today’s announcement is not even directed at transitioning to renewable energy, but at refining the dig it, sell it, burn it business model that has seen them so well for decades.

Climate change? Efficiency improvements and Carbon Capture, is their response. Replace coal with gas, fossil fuels for fossil fuels. Lipstick on a pig, we say.

To stop climate change, we need to leave fossil fuels in the ground. The latest research on this lays it out: no new oil, gas or coal projects if we want to stand a chance of staying under the two-degree limit to global warming, let alone the 1.5 degree aspirational target backed by the most climate-vulnerable countries.

So here’s the real takeaway figure from this morning’s announcement: $85 billion. That’s the amount of money these ‘climate leading’ companies are pouring into developing new oil and gas reserves in 2016 alone.

And announcements like today’s, in the drab surrounding of a rainy Friday afternoon, are crucial in providing a smokescreen to hide this reality. London may seem far from the plains of North Dakota, where the violence of the oil and gas industry is most apparent, but what goes on here is perhaps more sinister for being hidden.

Glossy press launches are where oil majors buy social acceptance for ripping apart communities. And the chance to hobnob with government ministers comes as a handy bonus.

These multinationals just won’t change. With each climate-induced disaster and temperature record broken, they come out and talk the talk, trying to pull the wool over our eyes. Strip it away and you have rich white men congratulating each other over canapés in London’s glass palaces, thirty floors up, while thousands of miles away, predominantly black and brown communities are destroyed and displaced as a consequence of their vanity and callousness.

Today’s announcement reminds us once more that fighting climate change means challenging power: these companies have a lot to lose, it’s no surprise that their PR stunts are vapid and hollow.

Find out more about Divest London and Fossil Free UK.

Linkedin
RELATED ARTICLES
OTHER ARTICLES
Members of the collective share some of their reasons to run as part of #UnitedBySummits, a campaign that looks to uncover transformative power of the outdoors.
The government is scrapping the Human Rights Act in a move that will hit marginalised people hardest.
The revered showbiz chronicler recalls his journalistic beginnings, documenting subcultural scraps in the ’80s.
A new documentary explores the government’s efforts to quash the protest movements of the late ‘60s by any means necessary.
While protests over abortion rights rage in the US, access to abortion services is still almost nonexistent in parts of the UK.
In the last of our dispatches from OFFF Barcelona, Rufus Deuchler and Vincent Gault discuss the future of creative process.