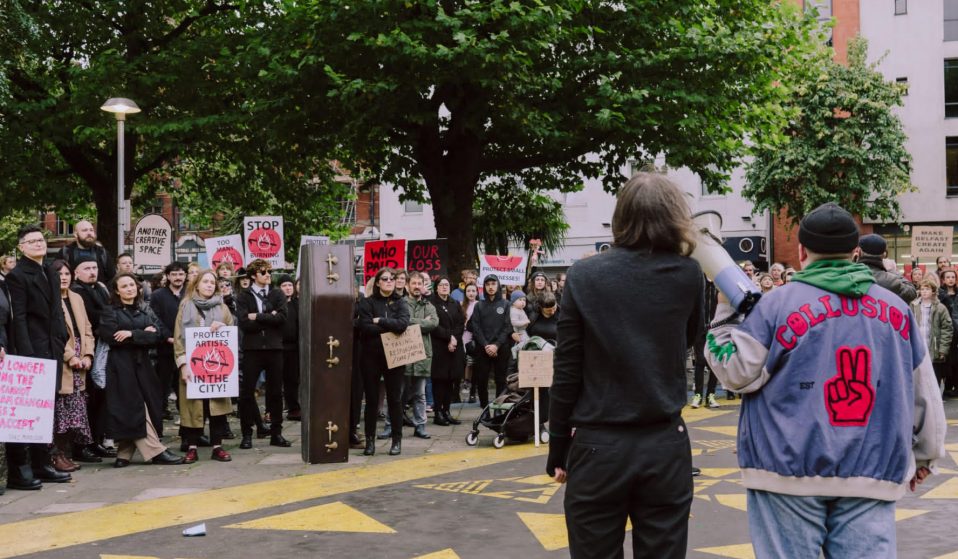 After a devastating fire, creatives in the city are coming together to call for more affordable workspaces.

After a devastating fire cost some artists their life’s work and archives, creatives in the city are coming together to call for more affordable workspaces.

It’s the early hours of the morning and in the centre of Belfast, a team of more than 50 firefighters are, not for the first time, tackling a blaze in one of the city’s historic buildings. This time the fire is in Cathedral Buildings, an impressive and vast Edwardian block, originally built in 1901 for tea merchant F.R. Lepper. Nowadays, its historical significance is largely forgotten. Instead, it’s known mainly for being close to Belfast’s tourist trap Cathedral Quarter, which every weekend is flooded with stag and hens, Americans tracing their heritage and European students with backpacks on their fronts. Cathedral Buildings also, until 5.40am on a Monday at the beginning of this month, housed many of Belfast’s emerging artists, designers and creatives, who held premises and studios in the block. Many of them have now lost not only their space in a rapidly gentrifying city, but also their life’s work.

“I still don’t think it’s fully sunk in yet,” says Elly Makem, a 28-year-old illustrator who was among those who lost thousands of pounds worth of equipment and materials in the fire. “There are moments where I go to reach for things that aren’t there and I still have this ghost feeling in the back of my mind that I’ll be able to return to my studio some day.”

Of all the creatives impacted by the disaster, Elly considers herself one of the lucky ones – the majority of her work is digital, and most she has stored on an external hard-drive which she managed to salvage. But nonetheless her space, and the work and sentimental pieces she stored there, not to mention her books and equipment, are now destroyed forever. “Every sketchbook I owned since 2014 was also in that studio, work which I won’t be able to produce again,” she says. “Sketches that I drew while travelling. Those are the hardest things to let go of and I haven’t quite swallowed the fact that they’re gone.” 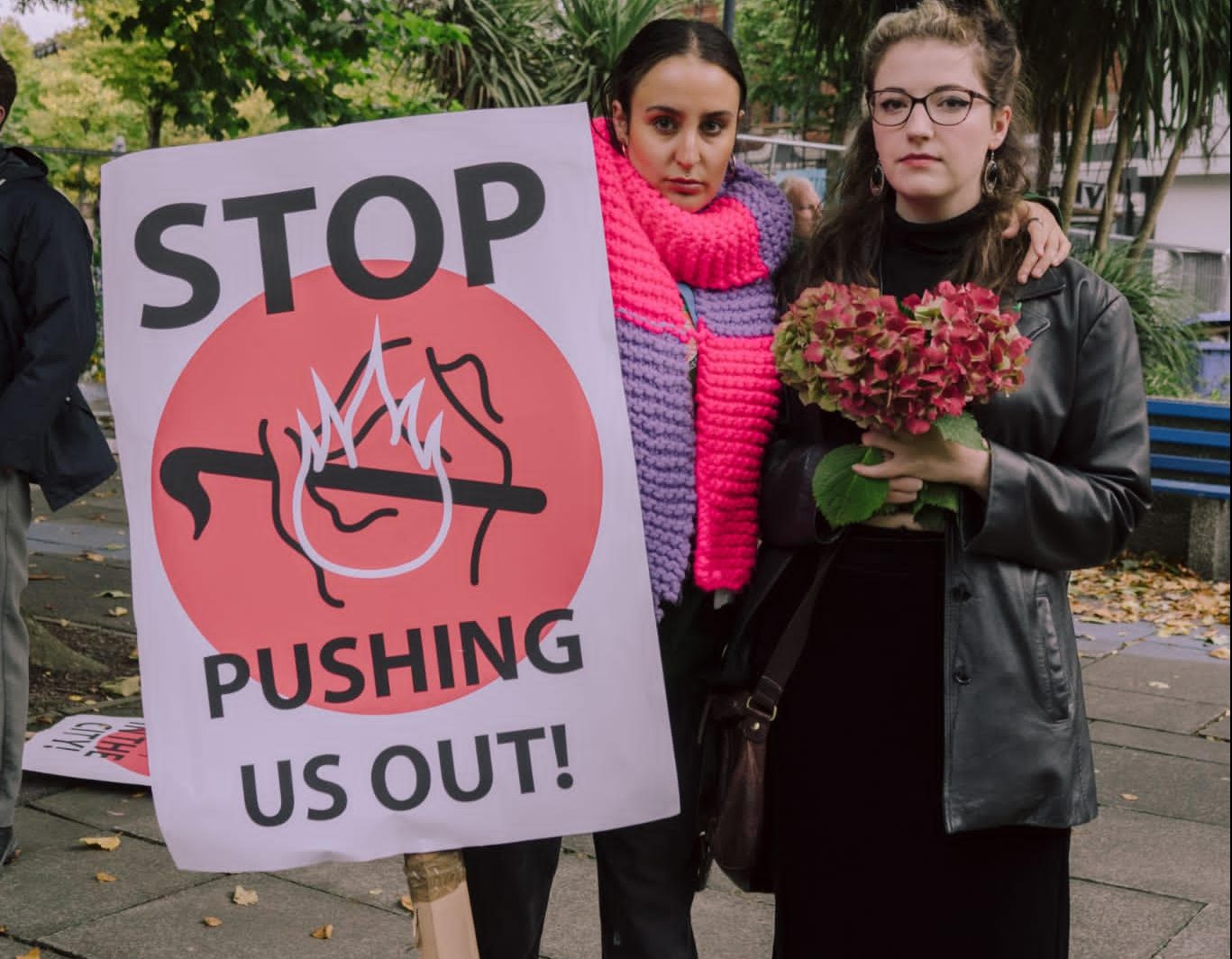 In the aftermath of the fire, Makem teamed up with some of her fellow artists to hold a demonstration in Belfast, mourning – quite literally – the loss of affordable studio space in the city. It took the form of a funeral, with attendees dressed all in black and some carrying mini-tombstones to raise awareness for what they call a “hostile environment” for young creatives in the north of Ireland.

“The reaction was phenomenal,” says Makem of the demonstration, for which a follow-up exhibition is planned on 4 November. The aptly-named “Pity Party” show will display work from queer collective The 343, who also held studios in the burnt-out Old Cathedral Building.

Jennifer Mehigan is another artist who lost her studio space in the fire, which she’d held for 15 years after an eviction from another studio in the city. “It’s just anything I’ve ever collected, gone,” she says. Along with her own archive, she also lost sentimental pieces, including letters from a friend who has since died. “There was so much smoke damage they were using a cherry picker to take debris off the roof. They poured 150,000 litres of water on top. So everything’s gone. Even if you survived the fire, the water was the worst of it, really.”

In the aftermath of the devastation, Mehigan spearheaded a GoFundMe campaign to help some of the creatives recoup costs and materials, and has since raised over £15,000. It is, of course, just a drop in the ocean, though, and as the fundraiser notes, “most of the losses are intangible and irreplaceable”. 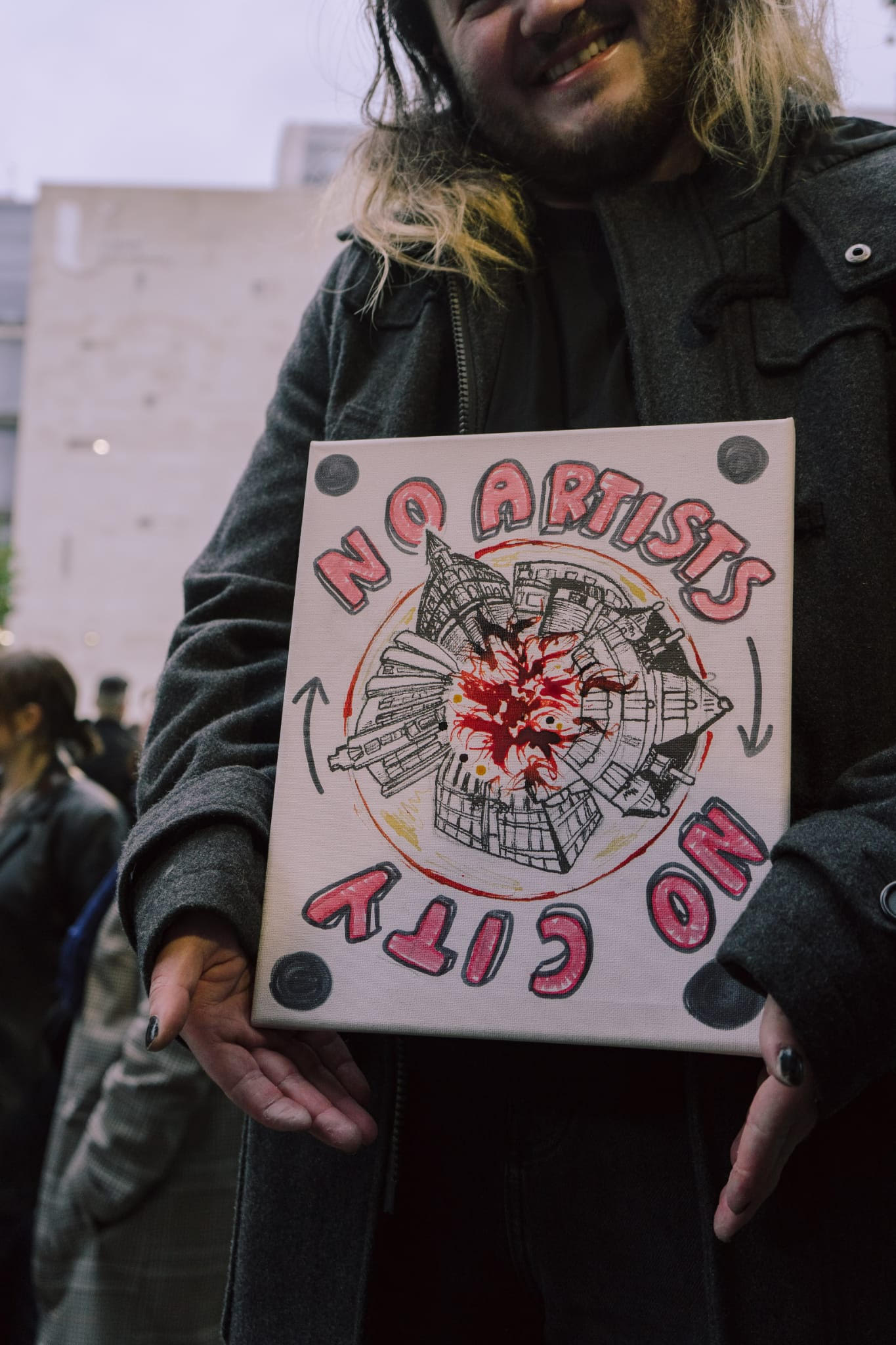 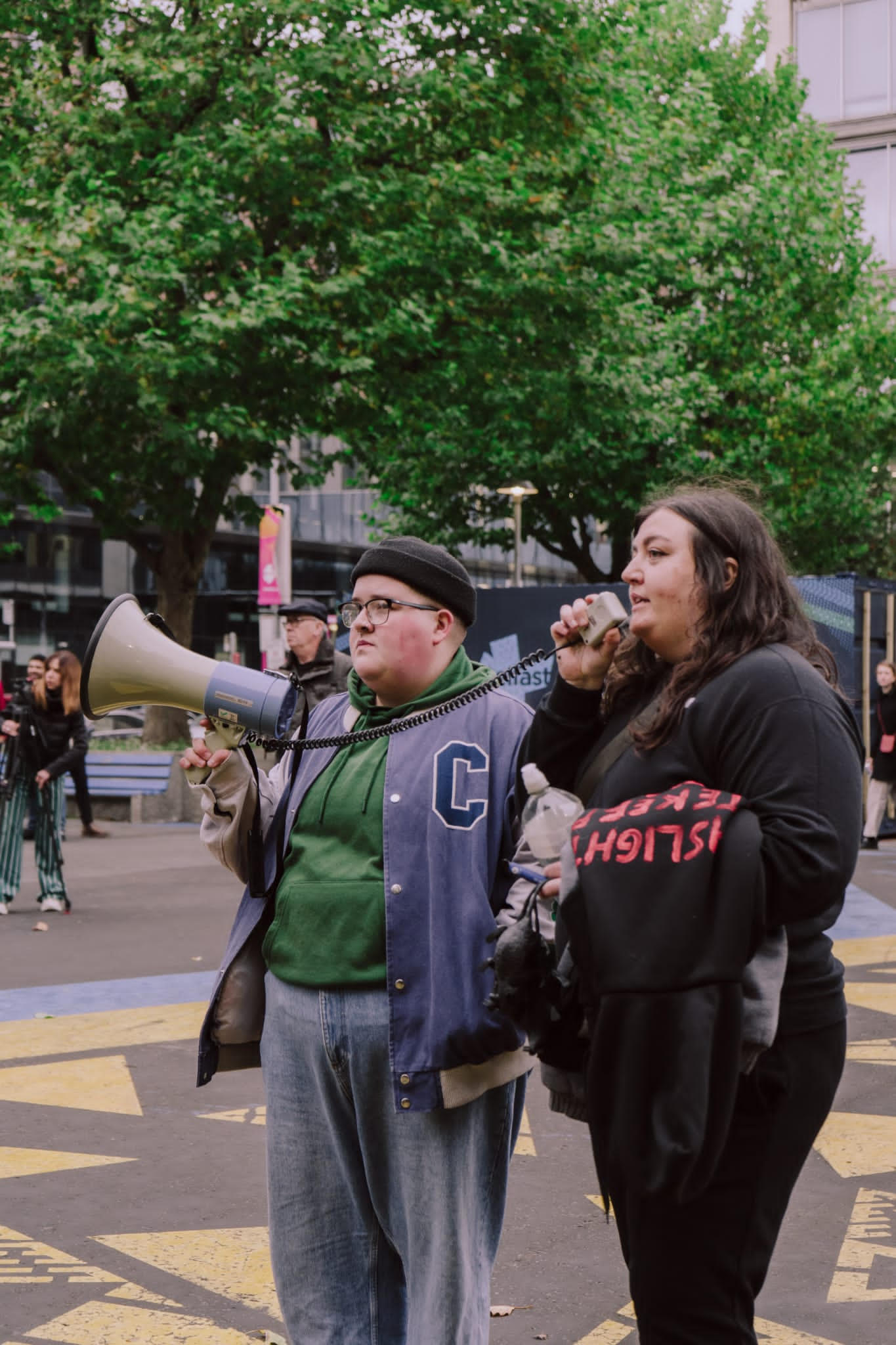 Perhaps the most frustrating aspect of all this is the lack of accountability on the issue. The Police Service of Northern Ireland (PSNI) were quick to apprehend an 18-year-old man and charge him with arson, burglary and possession of a Class B drug, and for their part, Belfast City Council have attempted to rehouse some of the creatives affected by the arson attack into temporary accommodation. But the wider issue is itself the dwindling affordability of spaces for young artists in Belfast. The city has a rich history of artists and creatives, and this year alone Belfast collective Array Studios picked up the prestigious Turner Prize for their installation recreating a quintessential Irish pub. But it’s a rapidly changing city too, one that, like the rest of the UK, is staring down the barrel of a rental crisis. “We need permanent spaces in the city”, says Makem. “We need rent to stay affordable, and we need investment in the artists to allow us to thrive and continue our work.”

Mehigan is also deeply worried about her future prospects. “I’m not really sure what I’m going to do,” she says. “I think I might move down south and just be done with Belfast because I don’t really have anything keeping me here now.”

Recent reshuffles of departments at Stormont have added to a confusing lack of accountability. Huck contacted both the Department of Infrastructure and the newly-coined Department of Communities to ask about provisions of affordable spaces for artists in the capital, but neither of them assumed responsibility. In a statement given to Huck, Belfast council claim, in spite of this, that the response to the fire is “multi-agency”. They added: “We continue to work with the businesses and artists impacted by the fire to offer practical help around insurance and legal issues, as well as helping businesses find alternative premises. In April 2022, council opened a new funding scheme called Support for Artist Studios and Maker Spaces for artist led organisations to provide financial and development support for this sector. We are also conducting a strategic review of artist studios and maker-spaces in Belfast to identify long-term, financing options for appropriate, sustainable accommodation to support the city’s art and cultural sector.” 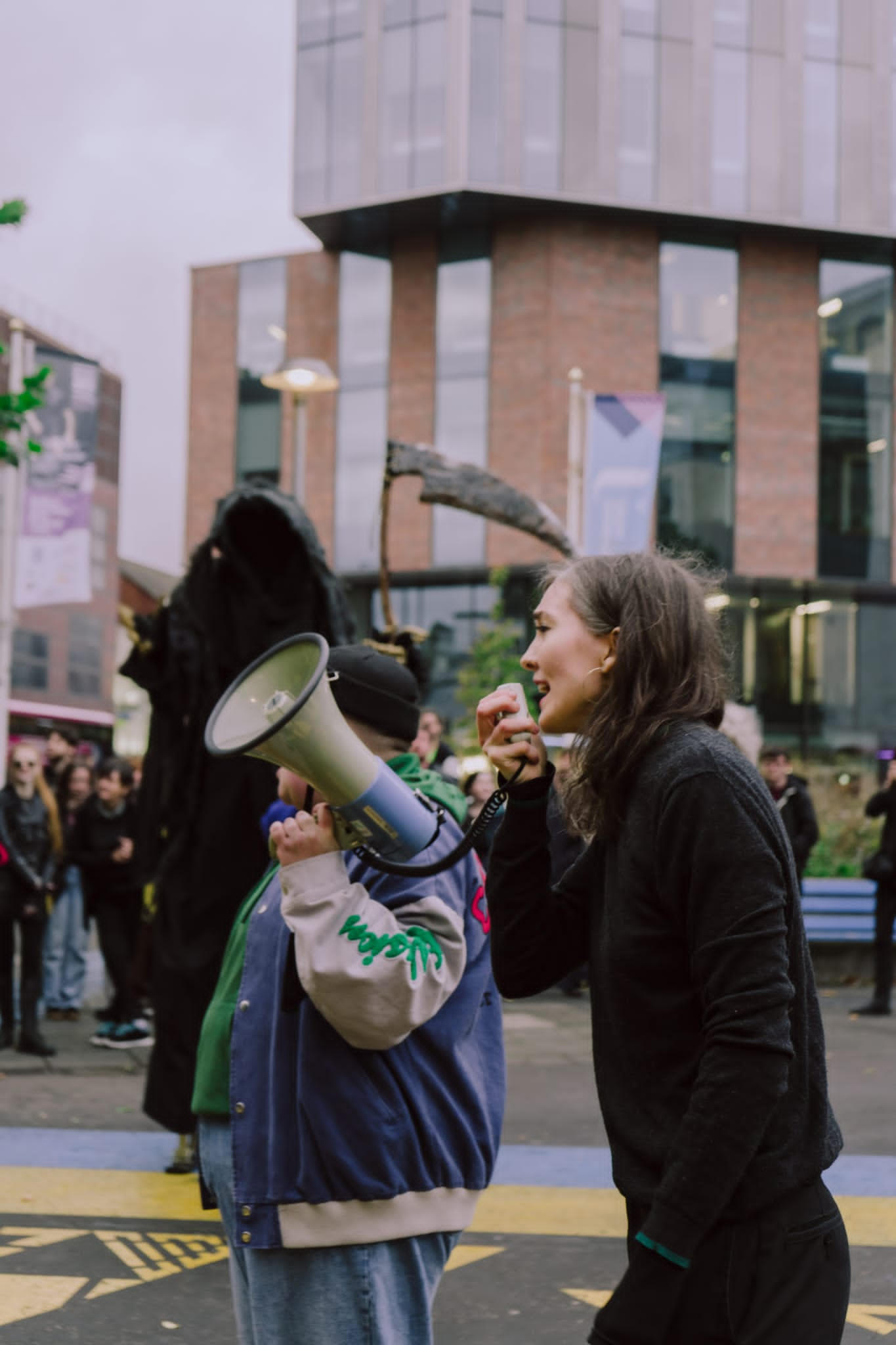 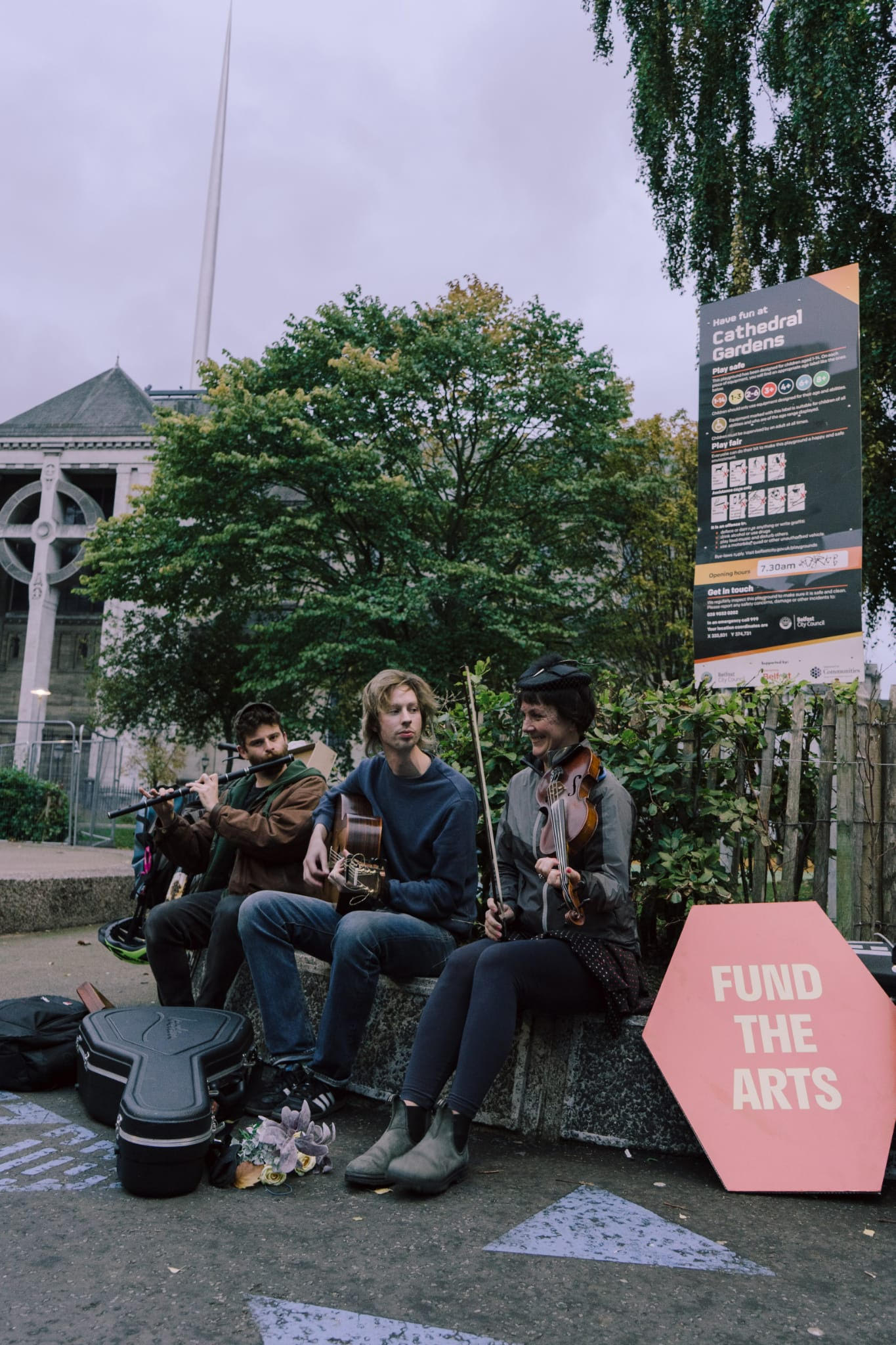 Over the course of the past years, fires have damaged other historic buildings in Belfast – in 2018, a team of over 80 firefighters worked to stop a blaze at a Primark store, and another blaze in March this year left a hotel in the city centre closed for months to deal with the damage. Non-profit Belfast Buildings Trust called the most recent fire – which borders Belfast’s controversial gentrification project, the so-called “Tribeca” – a “tragedy”, and is demanding civic action to prevent more of the same.

“It was one of the last few buildings for creatives that had, like, heating and plumbing”, says Mehigan. Makem notes that “Large property developments seem to be so flammable,” before calling that “speculation”. But what is factual, she says, is that artists in Belfast are being priced out of the city, “regardless of their awards or contributions”.

“It’s a tale as old as time,” Makem adds. “Artists come in to enliven the city and add to its culture, and once that has spiked enough interest for corporate development – they’re cast aside.”

Pity Party will take place at The Black Box on 4 November 2022.

Linkedin
OTHER ARTICLES
Proponents of personality tests argue that they’re necessary to find the best person for the job – but in practise, they’re often discriminatory.
Layna, Maysa and Amaya are three siblings looking to disrupt narratives around the sport. In doing so, they’re hoping to inspire a new generation of skateboarders.
A new documentary tells the story of an unassuming cul-de-sac of 13 timber framed houses built by Fusions Jameen – London's first Black housing co-op.
A new exhibition is marking the photographer’s 100th birthday with a look back at his extraordinary career.
Max Miechowski reflects on documenting land that is being lost to the sea – and the people who live life on the edge.
We sat down with trans comic Jordan Gray to discuss the power of portraying complex characters, giving humanity the benefit of the doubt and getting naked on live TV.