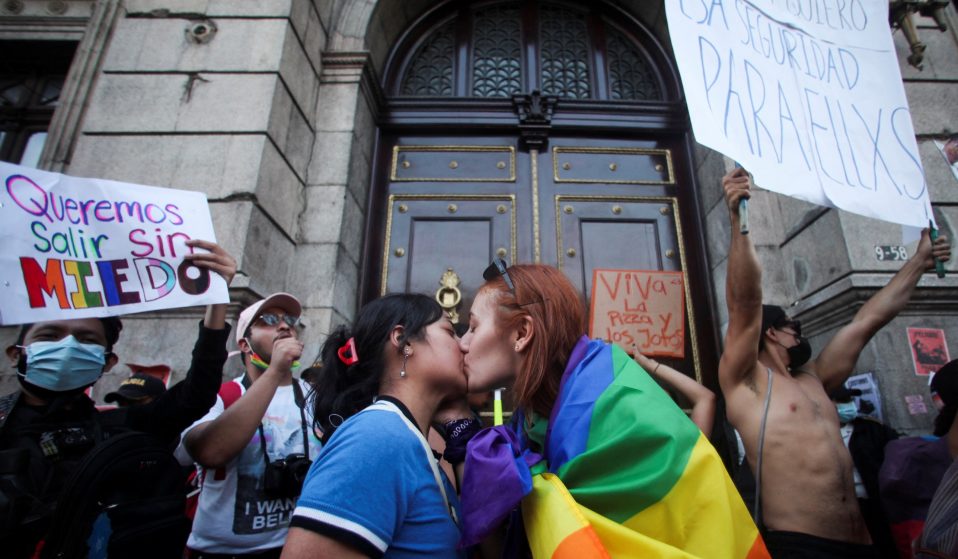 Activists are fighting to oppose the threats to some of the most vulnerable people in Guatemalan society.

Last month, Congress passed laws targeting the LGBTQ+ community and reproductive rights. Now, activists are fighting to oppose the threats to some of the most vulnerable people in society.

The past few years have seen Latin America make major leaps toward becoming a more equal society. Colombia legalised abortion last February, Mexico ruled criminal penalties for abortion unconstitutional in 2021, and Argentina decriminalised abortion in 2020. Chile recognised same-sex marriage in 2021, Ecuador in 2019, and Colombia in 2016. But in Guatemala, things are heading in the opposite direction.

On International Women’s Day (8 March 2022), congress overwhelmingly voted for the Law for the Protection of Life and Family, or ‘the law for life and family’, which criminalised abortion (currently it’s legal only if the mother’s life is in mortal danger) and even miscarriage, same-sex marriage, and forbids sexual health education in schools. It also defined family as one made up of a mother, a father, and their children, making outcasts of non-traditional family units.

Though the Guatemalan constitution states the country is a secular state, the country’s politics have always been rooted in conservative religious beliefs. The majority of the population is understood to be of Catholic, Evangelical or Christian faith. Guatemala became the subject of international scrutiny in 2015 when then-president Otto Perez Molina was stripped of his immunity due to his involvement in a customs corruption ring known as La Línea and forced to resign. Conservatism has become more widespread since – some argue in an effort to draw attention away from the government officials’ illegal behaviour.

Yesterday, on International Women's Day, my country of Guatemala, with a congress led by a woman, passed a bill "to protect life and family" that penalizes abortion, "regulates" sexual education, and rejects gender diversity. You can't make this up. #NoALa5272

“What we should really be doing in Congress is approving laws to advance human rights,” says Lucrecia Hernández Mack, a congresswoman from Movimiento Semilla – a moderate-left political party founded in 2017. “This law regressed the human rights of women and the LGBTQ+ community. It was also unconstitutional.”

“Religious fanaticism and conservatism have been useful for several political figures who have been accused of corruption in Guatemala, like our own president, to draw attention away from their own wrongdoing,” says congresswoman Ligia Hernández, who also belongs to Semilla and voted against the law for life and family.

Cristian González Cabrera, an LGBTQ+ rights researcher at Human Rights Watch, points out that “Historically, anti-rights bills seem to be used at moments of political crisis to distract from other issues”. Formerly known as Bill 5272, the law for life and family was initially presented to Congress in 2017, when then-president Jimmy Morales’ older brother was arrested on corruption and money laundering charges. Later that same year, the commissioner of the International Commission Against Impunity in Guatemala began investigating claims Morales’ party had taken illegal donations. The initiative was shelved then, but it’s now being discussed as the government faces national and international pressure over corruption and its persecution of anti-corruption figures.

The tactic seemingly worked, with the law receiving overwhelming support from the public and religious figures across the country. This is unsurprising, says Emma López, founding member of Acaricia, an NGO that promotes sexual and reproductive rights. “If you’re told this law is going to protect life and family, you wouldn’t exactly be against it.” Indeed, the way it was presented made it feel unquestionable.

But what life, and what family, was it really protecting? In 2021 there were a total of 72,077 pregnancies in girls aged 10 to 19. A vast proportion of these were the result of sexual violence. Data has shown that the number of mothers under the age of 19 committing suicide is increasing. The life of these girls hangs on comprehensive sexual education and access to safe abortion. The need for sexual health education, and for NGOs such as Acaricia willing to undertake the task as the government fails, is acute.

Guatemala ranks among the top 15 most violent countries in the world. There have been over 60,000 murders over the last decade – an average of 16 a day. One in two children suffer from a degree of chronic malnutrition, and 59 per cent of the population live under the poverty line. In June 2021, when the country was celebrating Pride month, two transgender women who were prominent activists and parts of transwomen’s rights organisation Otrans, and a gay man were murdered. In this context, president Alejandro Giammattei’s declaration of Guatemala as the pro-life capital of Ibero-America, in the same week that Congress approved the law for life and family, served as further proof of his deeply regressive and dangerous politics.

In mid-March 2022, following public outcry and mass demonstrations that gathered momentum over several days, the law for life and family was archived. But this is not the only law threatening LGBTQ+ and womens’ rights.

Indeed, things only look set to get worse, with a new anti-trans law for the protection of children and teenagers against “gender identity disorders” (also known as Initiative 5940), currently being advanced in Congress. “This bill employs the rhetoric of protecting children from ‘gender identity disorders’ to justify a measure that would ban information about transgender people in school,” says González Cabrera. “It would also require media outlets to label any transgender-related content as not recommended for children under-18… The fact that this is even in the legislature sends a strong message that transgender people are not protected under Guatemalan law; that society does not accept them.”

It’s a law that fosters hate and fuels the conditions that allow for the rights of marginalised groups to be violated. Discrimination based on gender identity and sexual preference is not included in the penal code, and there is no protection for those who suffer it.

Fortunately, there are groups fiercely opposing this law and advocating for marginalised people. Organisations such as Gente Positiva, an NGO that advocates for HIV prevention and supports people living with HIV, and Otrans, which campaigns for the rights of trans women, are working alongside congressman Aldo Dávila – Guatemala’s first and only openly gay and HIV positive politician – to present an initiative that would criminalise hate crimes based on prejudice.

A bill in Guatemala's Congress on "gender identity disorders" would stigmatize trans people and curtail children/adolescents' the right to education.

Dávila, a member of the left-wing party Winaq, was away for work on International Women’s Day when the law for life and family was voted through. He was given no notice that it was going to happen, depriving him of the right to advocate for his community. Dávila says he became a congressman because of his opposition to the law for life and family. “When it was voted through, I was outraged. I’ve been a victim of hate crimes from congresspeople, in Congress,” says Dávila. “They call me slurs when I stand up to speak. It’s a reflection of what our lives are like.”

The law for life and family’s approval in Congress, and the knowledge that the anti-trans rights bill will eventually make its way to Congress, is felt deeply by many. “I thought, I can’t get married now,” says Didy Aceituno, a founding member of feminist collective Activistas, which seeks to promote and educate people on queer peoples’ and women’s rights. “It was also so invalidating. They put out an illustration of the families that weren’t ‘valid’ under this law, because they weren’t traditional. I didn’t see myself in that.”

Otrans and Gente Positiva’s legislative work will prove invaluable for the future of the community. A group of smaller collectives working to educate people on queer peoples’ and women’s rights  – among them Activitas, Resisters, and Visibles – are also doing invaluable work.

But it’s clear that this is only the beginning of a complicated, exhausting, and dangerous fight: by advocating for themselves, queer people and women put themselves at risk of hate crimes and further discrimination. “We’re worried. We feel vulnerable and we know we’re putting ourselves at risk,” says Adria Muños, one of the founding members of Otrans. “But there’s no better fight. We don’t have the luxury of doing nothing. We won’t be silent ever again.”

Linkedin
RELATED ARTICLES
OTHER ARTICLES
In the last of our dispatches from OFFF Barcelona, Rufus Deuchler and Vincent Gault discuss the future of creative process.
Photographer Robin Graubard’s debut book offers an unflinching record of turbulence and change across the Balkans.
The revered showbiz chronicler recalls his journalistic beginnings, documenting subcultural scraps in the ’80s.
To mark the anniversary of the mass trespass of Kinder Scout, a group of hikers came together with the intent of creating a new, fully inclusive culture for rural spaces.
Following the release of his latest album God Don’t Make Mistakes, the rapper talks horror villains, police brutality and being unafraid to show his vulnerable side.
A group of Ukrainians living in Poland are helping Ukraine withstand Russia’s brutal invasion by buying supplies and shipping them directly to the war’s frontlines.