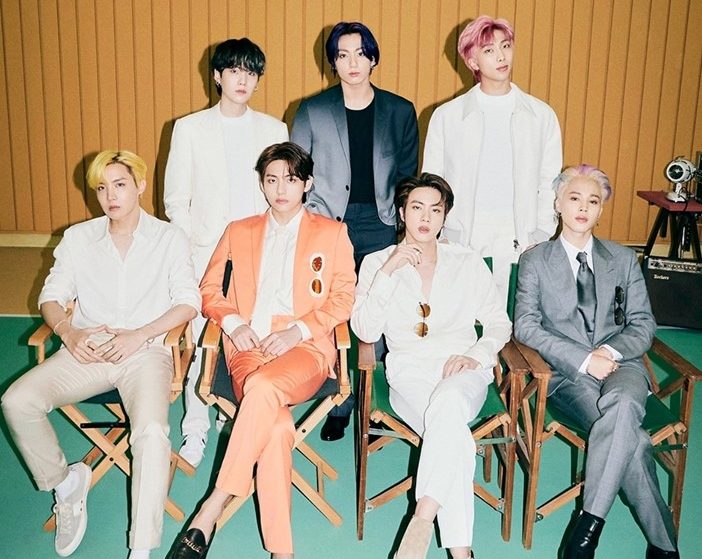 After emerging as a powerful force for social justice during the BLM protests last summer, K-pop fans are now mobilising around another urgent human rights issue: Palestinian liberation.

After emerging as a powerful force for social justice during the BLM protests last summer, K-pop fans are now mobilising around another urgent human rights issue: Palestinian liberation.

On May 10 2021, the K-pop Twitter account @sceneryfortae, which has over 780,000 followers, halted regular programming. Usually, its tweets are all about Kim Taehyung – also known as V – a member of the wildly popular Korean boys band BTS. But a crisis was unfolding in Palestine, and @sceneryfortae’s admins felt they could not stay silent.

Under Taehyung’s name, they donated an undisclosed amount to iF Charity, a UK-based organisation that has been working to address the humanitarian crisis in the Gaza strip since 2002, and posted the screenshot of the receipt with the hashtags #SaveSheikhJarrah and #SavePalestine. The tweet set off a wave of similar acts of solidarity across Taehyung’s global fanbase, who donated various amounts to organisations worldwide, from Malaysia’s Karisma Humanitarian Outreach Mission (KHOM) to the Ohio-based Palestine Children’s Relief Fund.

“Having a big account comes with big responsibilities,” says Claire, 29, from France, one of @sceneryfortae’s admins. “We wanted to channel our love for our idol and role model into something meaningful.”

Taehyung was not the only pop star to inspire his fans to mobilise in the wake of Israel’s attacks on the East Jerusalem neighbourhood of Sheikh Jarrah and the bombardment of Gaza, which killed at least 248 Palestinians, 66 of those children, with retaliatory rockets from Hamas killing 12 Israelis. Across the world of K-pop fandom, stan accounts have been spreading awareness about the plight of Palestinians and pointing their followers towards resources to educate themselves, petitions to sign, and on-the-ground organisations to donate to.

Clara, 21, runs the fan account @btxtbabe for BTS and fellow boys band TXT. A US citizen of Lebanese descent, she felt compelled to speak out about the atrocities perpetrated so close to her country of origin. “When you’re part of a global [K-pop] community, naturally, your perspective broadens and your empathy increases,” she says. “You can’t ignore human rights issues in other countries when, chances are, one of your mutuals is from there.”

For years now, K-pop fans have been building a reputation as a socially conscious and politically active force to be reckoned with. BTS fans, known as ARMY, have organised over 600 fundraisers across the world since 2015. In 2018, they even founded their own fundraising organisation, One in an ARMY (OIAA), which has, among other initiatives, provided medical supplies to Syrian refugees, meals for Rwandan children, and baby formula to mothers in Venezuela.

But it was last summer, at the height of the Black Lives Matter protests, that K-pop fans’ activism came firmly into the limelight. In June 2020, K-pop fans flooded a Dallas Police Department tip line app – which was designed to help cops identify protesters at BLM demonstrations by encouraging people to send videos of the crowd – with videos of their favourite artists performing on stage, known as fancams. Fancams became a favoured weapon, used to spam hateful hashtags such as #WhiteLivesMatter and #WhiteOutTuesday.

Soon, they were onto Trump. On June 20, the then-US president gave a speech in Tulsa, Oklahoma to rows and rows of empty seats, tickets for which had been claimed by K-pop fans and TikTokers to disrupt the event.

But K-pop fans are not just skilled provocateurs; they also put their money where their mouth is. On June 6 2020, BTS donated one million dollars to organisations including Black Lives Matter and Reclaim the Block. A day later, BTS fans had matched – exceeded, even – the donation in a campaign known as #MatchAMillion. Although there has not yet been an initiative on such a scale for Palestine, K-pop accounts have made a number of individual donations to different organisations.

For Amalia Nur Andini, a lecturer in fan studies at the University of Brawijaya in Indonesia, K-pop fans’ ability to trigger positive social change is not to be underestimated. “The way to make people take action is by tapping into their emotions. And the easiest way to do that is through popular culture,” she says. “I mean, how many charity projects managed to raise one million dollars in less than 24 hours? We see how such a supposedly ‘trivial’ obsession can turn into something impactful.”

Clara agrees: “It’s not about trying to appear ‘woke’ or to perform activism. It actually is activism.” And methods are adapted for each cause. In the case of Palestine, one of the main ways K-pop fans show solidarity is through translation. In a tweet posted on May 11, user @JatIkhwan, who shares updates in Malay about Palestine to his 334,000 followers, said: “Kudos to all Kpop stan accounts who have been actively translating my tweets into English. I know Kpop has a huge number of followers across the globe and I hope parts of the world know about what’s happening in Palestine.”

Sue, 21, who runs the account @suliceu99 from Malaysia, is one of the people behind this massive translation effort. “I saw my fellow Malaysian people give non-stop updates about the situation, from the first day of the war till now, and it really inspired me to help them translate,” she says. In Malaysia, a majority-Muslim country, support for Palestine is strong. But Sue knows that it’s not the case everywhere, and she believes that K-pop stans using their platforms can go a long way. “All we need to do is repost or share the info and in a split second, everyone in this world can be aware of a topic that might be foreign for them,” she says.

For Julia Trzcinska, a Polish academic specialising in fan studies who has written about K-pop fandom as a political force, K-pop fans’ knack for activism comes down to three things: organisational skills, group identity, and social media savviness.

First of all, when it comes to organisation, it’s worth remembering how much of a K-pop acts’ success relies on their fandom. In South Korea, Trzcinska explains, groups don’t “release a new album”, but they “make a comeback”. Every week, groups compete in music TV programmes to find out who has had the most successful comeback based on the number of views and music sales they receive. “Fans organise streaming parties, prepare special instructions on how to make their views count and those who know the Korean language sometimes make manuals to make it accessible for those who don’t.” Those planning and management skills easily translate into large-scale mobilisation efforts for social justice causes.

Secondly, Trzcinska points out, K-pop fans often have a “sense of fighting against everyone else”. Often facing shame for their love of K-pop, they have developed a strong shared identity – one which is predicated on open-mindedness and a desire to challenge existing structures of power. “I think that for many fans, [they feel] in their lives a need to be different, to like something else than their peers and to somehow question the broadly understood mainstream,” Trzcinska adds. “They’re people who are open to different cultures, who are tired of binary gender stereotypes, and that often comes hand in hand with being politically active.”

“K-pop fans tend to root for the ‘underdog’ or people with less power,” Sue says. “They’re willing to learn about Palestine and to fight as best as they can so that innocent people don’t suffer.”

Finally, the great majority of K-pop fans are digital natives, primed not only to share their beliefs on social media, but also to act on them in innovative ways – fancams being the perfect example. “K-pop stans know how to trend tags and they know how to spread information quickly, so it’d be a waste not to use that for good,” Clara argues.

K-pop fans are also well-versed in avoiding “shadow-banning” – when a platform blocks a social media user’s content without the user knowing – which came in handy to prevent their posts about Palestine from getting reported or taken down. For instance, Sue censored certain words in her tweets (‘Isra*l’ is a common alternative) and tried not to retweet too many posts in rapid succession, which Twitter may have flagged as spam. “Being a K-pop fan really gives me the upper hand in times like these,” she says.

Of course, not every single K-pop fan is willing to be a voice for political change. Clara and Sue both lost followers and faced backlash when they became vocal about Palestine: “I got a lot of replies that said, ‘Why do K-pop fans need to be involved in this matter?’,” says Sue, “but I choose to not entertain them. I’d rather spend my time spreading awareness about Palestine.”

And she’ll have to continue amplifying the cause for the foreseeable future. Although a ceasefire was declared on May 20, Israel has continued its attack on the Palestinian people over the past few weeks, with Israeli airstrikes launched on Gaza, Palestinian activists arrested and Palestinian security officers killed during Israeli raids. The recent rise to power of Naftali Bennett, who supports the annexation of the West Bank and outright opposes Palestinian statehood, is set to further inflame tensions. The fight for Palestinian liberation is nowhere near over, especially as Israel strengthens its economic and military ties with countries across the globe, including South Korea, with whom it has recently signed a free trade agreement.

For K-pop fans, that’s why it’s crucial to keep the momentum going. “We have to keep talking about Palestine,” Clara insists, “because the occupation is waiting on us to forget.”

Linkedin
RELATED ARTICLES
OTHER ARTICLES
With inflation now at a 40-year-high of 9 per cent, demonstrations organised by TUC took place to demand action from the government.
50 years since its inception, and the campaign calling for recognition that capitalism depends on domestic labour is as pertinent as ever.
Photographer Arthur Grace recalls travelling through the Soviet Bloc and finding ways to evade the surveillance of his work.
Thomas Hoepker‘s images taken during a road trip across America provide a searing social commentary about a divided country.
The author discusses the all-consuming nature of heartbreak, and turning the experience into an incisive exploration of love and loss.
Photographer David Hoffman recalls documenting the extreme wealth inequality around Tower Hamlets and Hackney int the 1980s.