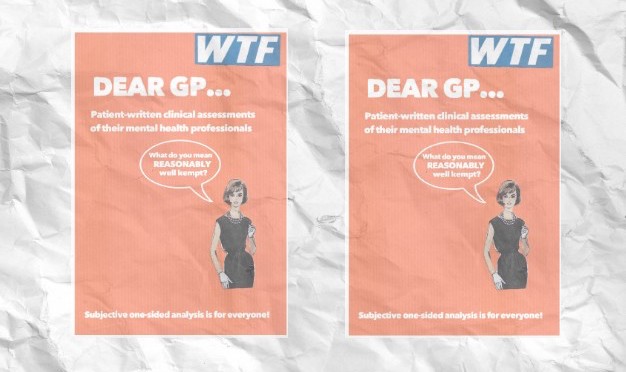 Dear GP is taking the traditional clinic letter and turning it on its head: painstakingly describing the doctors, rather than the patients.

Dear GP is taking the traditional clinic letter and turning it on its head: painstakingly describing the doctors, rather than the patients.

The first step to getting help, so the current mental health discourse goes, is asking for it. We’re told that visiting a GP, counsellor or other mental healthcare professional is an essential first step towards the often vague and indistinct goal of ‘getting better’ – once you’ve done that, allegedly, you’re pretty much set.

For many of us, this narrative falls dramatically short. Thousands of people don’t receive help at all, and those of us who do manage to gain access to the mental healthcare system are left disappointed and disempowered by the treatment we receive.

Receiving a clinic letter can be just one of these invalidating experiences. For the uninitiated, a clinic letter is sent to your GP after a meeting or psychiatric evaluation: the letters are varied, containing not only what you told the mental health professional but also details of your affect or self-presentation. Of course, the interpretation of much of this is subjective, no matter how well-trained or apparently empathetic a clinician is: the significance of a certain choice of word or mode of aesthetic self-expression is completely up for debate. Language such as ‘claims’ and ‘denies’ cast doubt on our experiences. And often, the details picked out seem utterly superficial.

Now a new zine, Dear GP, is taking the traditional clinic letter and turning it on its head. The publication features a collection of letters addressed to GPs – but instead of including details about the patient, they painstakingly describe the clinician.

“Dear GP, thank you for referring me to this meticulously dressed young doctor,” one letter starts. “He positioned himself unconventionally, away from the computer with a pad of A4 paper and a ballpoint pen. He displayed behaviour suggesting an overreliance on the security and stability of the desk to make notes. He had some insight into his relative inexperience but also displayed traits of overconfidence.”

One writer notes, tongue firmly in cheek, a doctor’s “naivety” in managing crisis: “[she] listed having a bath, drinking chamomile tea and going for a walk as strategies”. Another targeted their psychiatrist’s poor eye contact and disinterest. “The glazed, faraway look that occasionally came over her suggests a concerning lack of engagement with the system,” they write. 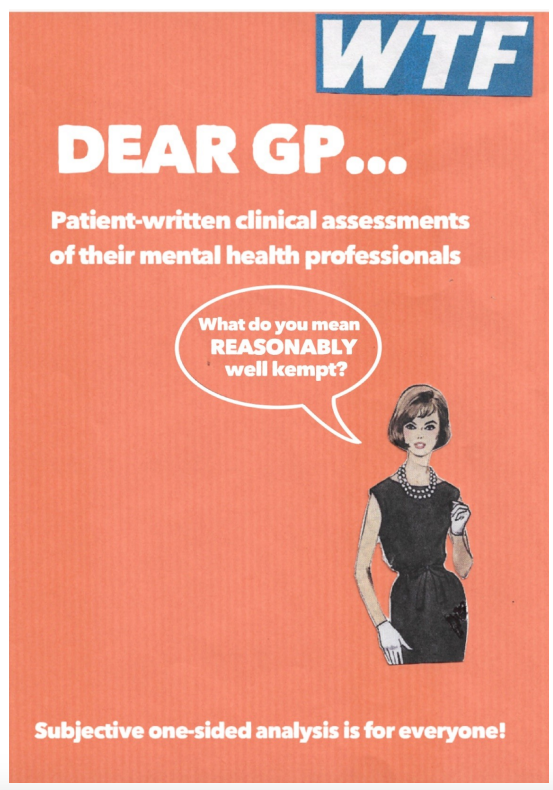 The idea for the zine, the creators tell me, came first from Twitter, where users were sharing their experiences of receiving clinic letters. “One of us got a letter that described us as ‘has no hair’, and we started to dream up how we’d describe a psychiatrist the way they describe us – ‘has hair’?!” the collective tells me. “These letters drop through your door and feel like a total insult.”

Clinic letters have significant and often long-lasting repercussions for patients. Opportunities to respond to their content are few and far between, and those who do complain are often branded difficult or unwilling to accept a treatment plan. They also form the backbone of medical records: “they’re used to make judgements about us from that point on,” the writers say. “It’s so frustrating to see a version of yourself in letters and notes that doesn’t match your sense of self at all.”

There’s also a significant, inherent power imbalance in clinical relationships that is “rarely recognised”, the collective argues. Someone else’s opinion of you is what’s going to matter – “even if they’ve only met you once for half an hour.”

“The worst thing is knowing theirs is the version that’s going to be believed,” they say. “It will colour any other professionals’ view of you because they’re in a position of authority. It’s good to subvert that through these letters and return the medical gaze back to the professional”.

The aim of the zine isn’t to appeal to mental health professionals. “We don’t do this in the hope or expectation of change – it’s because laughing about it makes it hurt a bit less,” they explain. The collective does note several words and phrases they hope to see phased out of the letters: “claims” and “denies” are big ones, as are those related to how someone looks. How “fashionable”, “smart” or “un/kempt” we are has no bearing on our experience of illness; why should it form the backbone of how we’re seen and treated?

This form of writing medical notes is deeply ingrained: “It’s a power I don’t think most professionals are ready or willing to give up,” the collective says. But despite that, the zine itself has a power of its own.

“If people decide to write about us in a slightly more human way then great, that would be a start,” they conclude. “But the point of the zine is to have a space where we have the power. And that is already achieved.”

You can buy Dear GP for £1 here; proceeds will go to the NSUN, the National Survivor User Network.

Linkedin
RELATED ARTICLES
OTHER ARTICLES
After news broke last week around an expected reversal of the 1973 landmark law that made abortion legal in the US, protestors gathered in the UK in support of American women.
Members of the collective share some of their reasons to run as part of #UnitedBySummits, a campaign that looks to uncover transformative power of the outdoors.
Following the release of his latest album God Don’t Make Mistakes, the rapper talks horror villains, police brutality and being unafraid to show his vulnerable side.
Our new magazine is here, starring the inimitable Mitski. Order your copy now and join us on a trip around the world.
From the Yakuza to a biker gang, Bruce Gilden recounts capturing Tokyo and Osaka in the ‘90s.
The revered showbiz chronicler recalls his journalistic beginnings, documenting subcultural scraps in the ’80s.