News & Politics / Activism / The pantomime dames fighting to save theatre 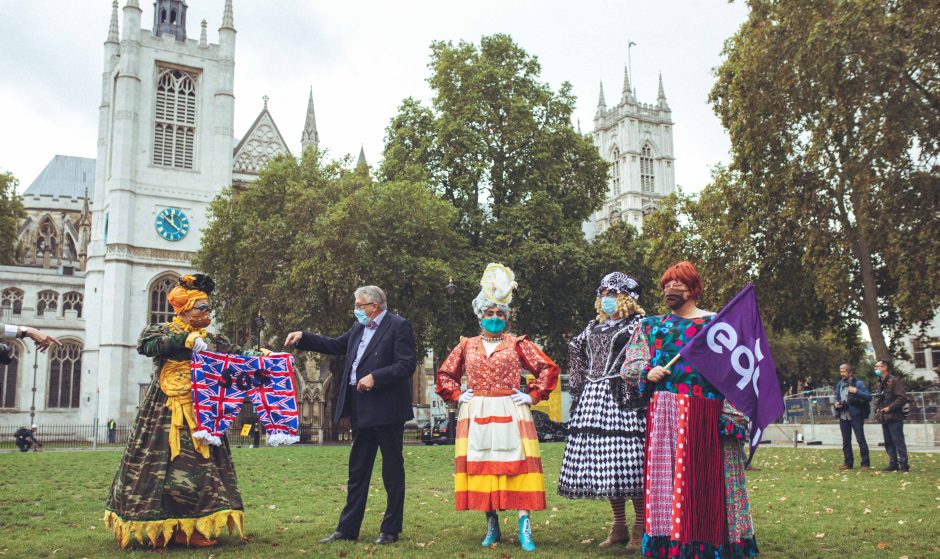 Tens of thousands of theatre performers have been left without support during the pandemic, and last week, hundreds of them took their fight to the streets.

Tens of thousands of theatre performers and workers have been left without support during the pandemic, despite government claims to the contrary. Last week, hundreds of them, led by a fleet of dames, took their fight to the streets.

The first thing you could hear was the music, drifting above the heavy din of traffic on Whitehall. Next, the flags came into view, making their way down the thoroughfare, fluttering in the early autumn breeze. As the protest came into view, restricted to the pavements by the police, half a dozen brightly coloured, amorphous blobs soon became recognisable as pantomime dames, leading a procession of around 120 people down the street.

Last week, performers from across the country gathered in central London, marching from Cambridge Circus – on the edge of the city’s west end district – down into Westminster, to protest the lack of government support for creative workers. These workers say have been excluded from the government’s self-employed support scheme, put in place in response to the pandemic. The demonstration, organised by Excluded UK, Bectu and Equity unions, saw the crowd arrive at Richmond Terrace, just opposite Downing Street, to huge fanfare.

After being addressed by speakers, including Tracy Brabin – the ex-actor turned Labour MP for Batley and Spen – the crowd marched on Parliament, coalescing around the Churchill statue and on the grass in Parliament Square, watched over by a wall of cameras and reporters. The march, led by dames, included theatre workers and performers who had seen their livelihoods ripped from under them with the closure of theatres due to the pandemic – a closure that only looks set to continue. 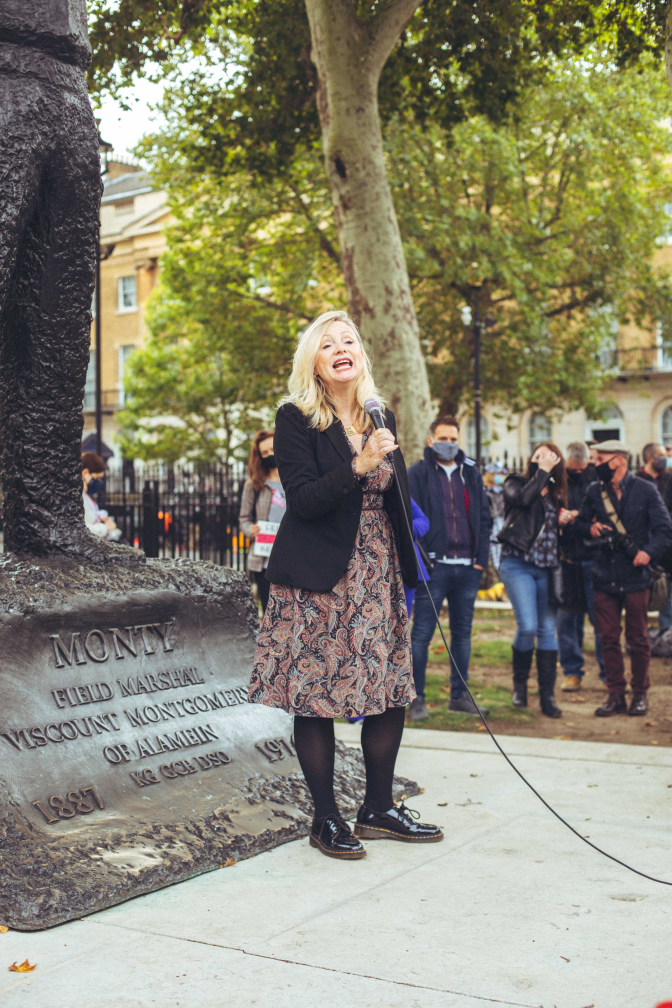 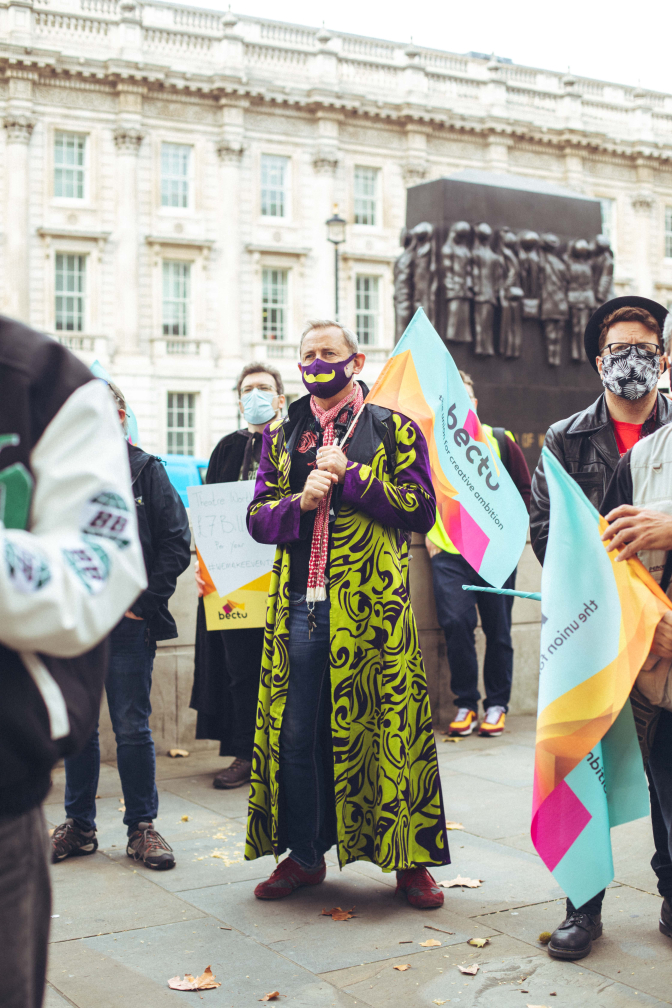 Paul Fleming, general secretary of Equity union, also took part in the march. “We’re here because we need two things: we need a proper self-employed support system in place for this coronavirus crisis and, because we’re looking to reopen theatre in as safe a way possible, as soon as possible,” he told Huck.

Despite the existence of the self-employed support scheme, which the government insists is in place to help those who have lost their livelihoods because of the closure of venues like theatres, Fleming states that it simply isn’t good enough. “The overhead figure,” he says, “is that 40 per cent of our 48,000 members have received not a single penny from the self-employed support scheme, which shows you the scale of the problem.”

Many entertainers have found themselves excluded from the self-employed support scheme (one of several packages of support announced by the government in March as the country went into lockdown). “The reasons why people fall out of the scheme are diverse, but it particularly affects people who have entered the industry fairly recently, and so don’t have three years worth of tax returns. On top of this, lots of actors will have casual work in bars and restaurants and so on, particularly in the hospitality industry, and they won’t be eligible for the self-employed scheme.” 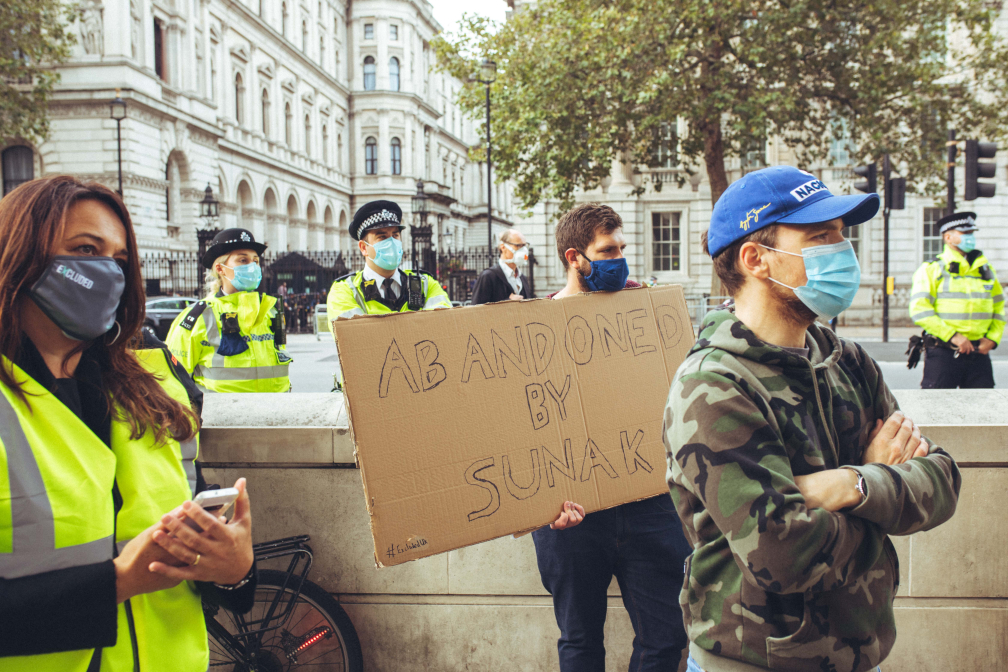 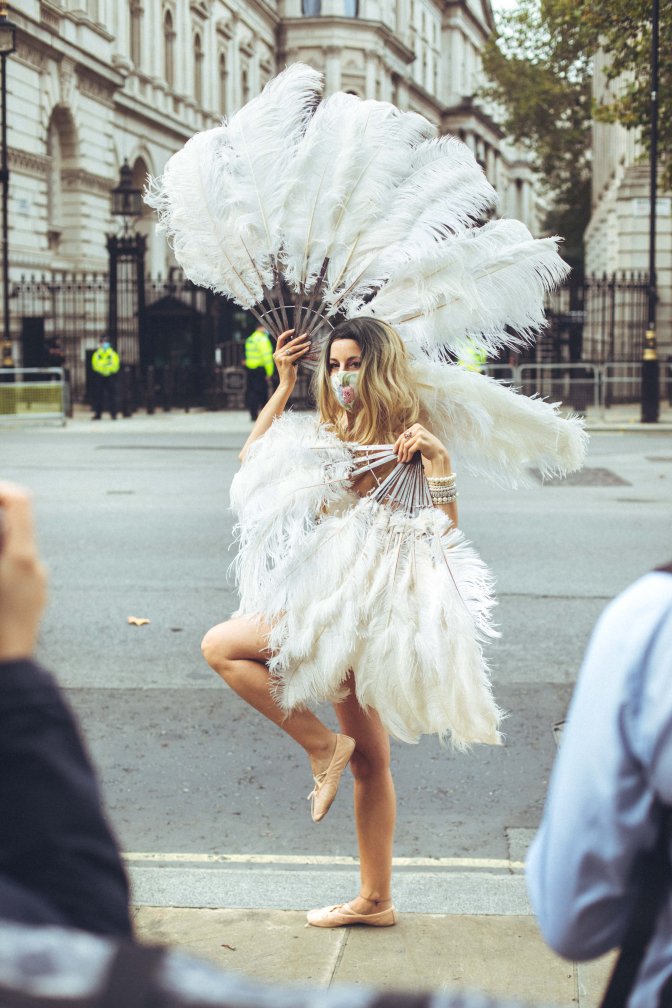 “There are loads of ways the government could have supported production,” he says, citing pod working, rural touring and COVID-secure reopening of theatres as examples. But Fleming says that attempts to engage the government on the issue have been met with “a wall of silence”. It’s should come as little surprise, then, that despite an appearance of frivolity – as pantomime dames struck camp silhouettes across the darkening sky and posed for photos with members of Parliament who’d come to show their support – there’s was a quiet desperation underpinning the demonstration. 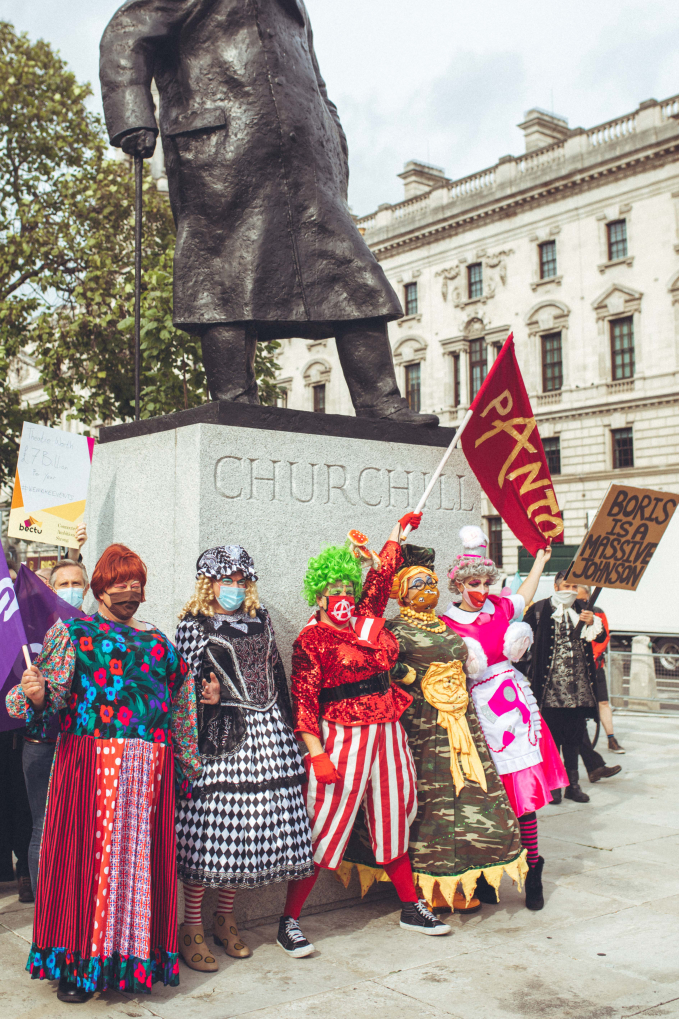 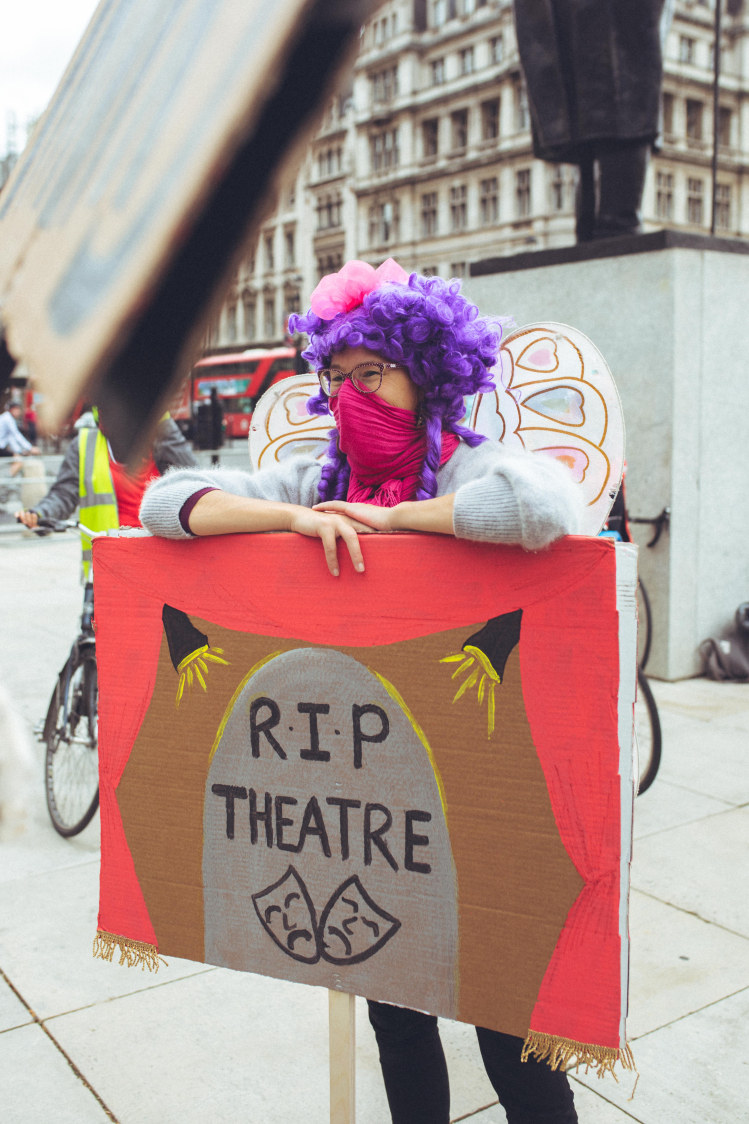 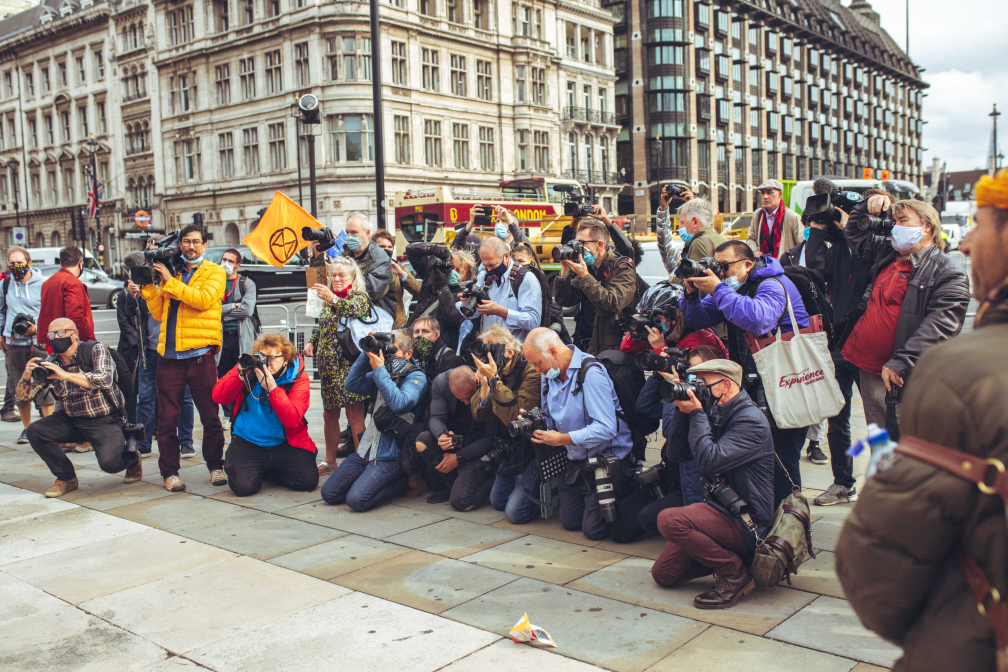 “In the absence of a panto season, the mixed economy of theatre is on the verge of collapse because so many theatres need it for their revenue,” Fleming states, lamenting decades of industry commercialisation. He says that the pandemic is simply a catalyst for wider structural issues within the industry, which has increasingly come to rely on “ice cream sales, bars, commercial productions and pantomime seasons in order to put on worthy new work.” It is, he admits, “straightforwardly make or break for much of the industry”.

“Unless we get support’, he warns, “we as a sector cannot get through Christmas”.

As the pantomime dames who led the march breezed across the square, floating from photocall to photocall, Huck caught up with some of them, to find out what’s at stake for them. 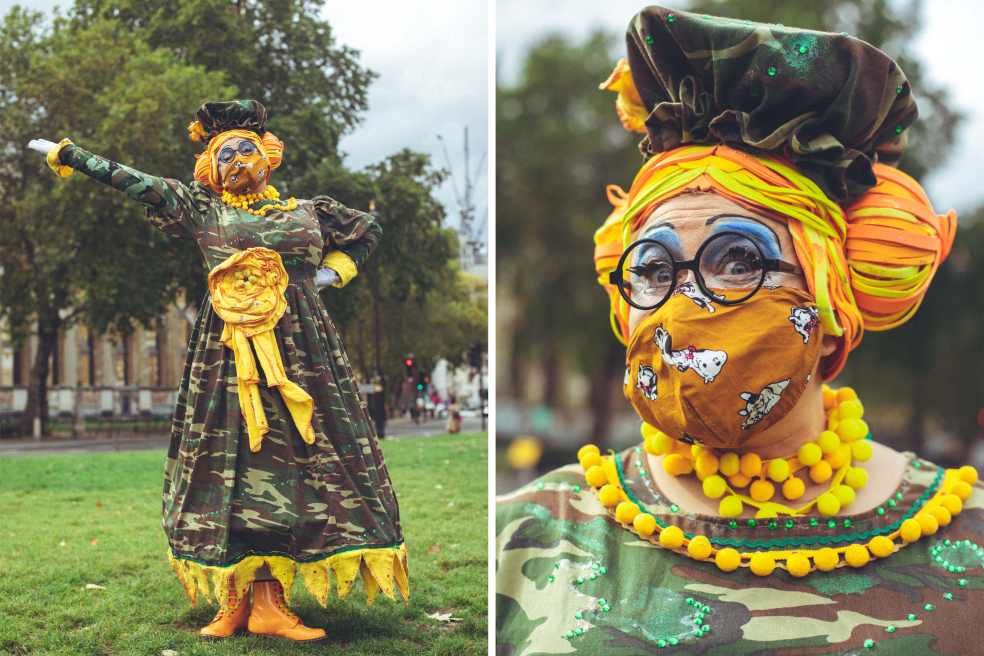 “For each of us here today in garish costumes there are two or three people working behind the scenes. I’m here today not only for the theatres, and for the performers, but for the huge community that helps to enrich and entertain the people of our nation and across the world.

We don’t expect preferential treatment, we’re just asking for some help. The majority of us have lost our contracts and if that has to happen to keep people safe, then that has to happen – but we need support. We were told at the beginning of this that no-one would be left behind, but there are a lot of people who are infact being left behind.” 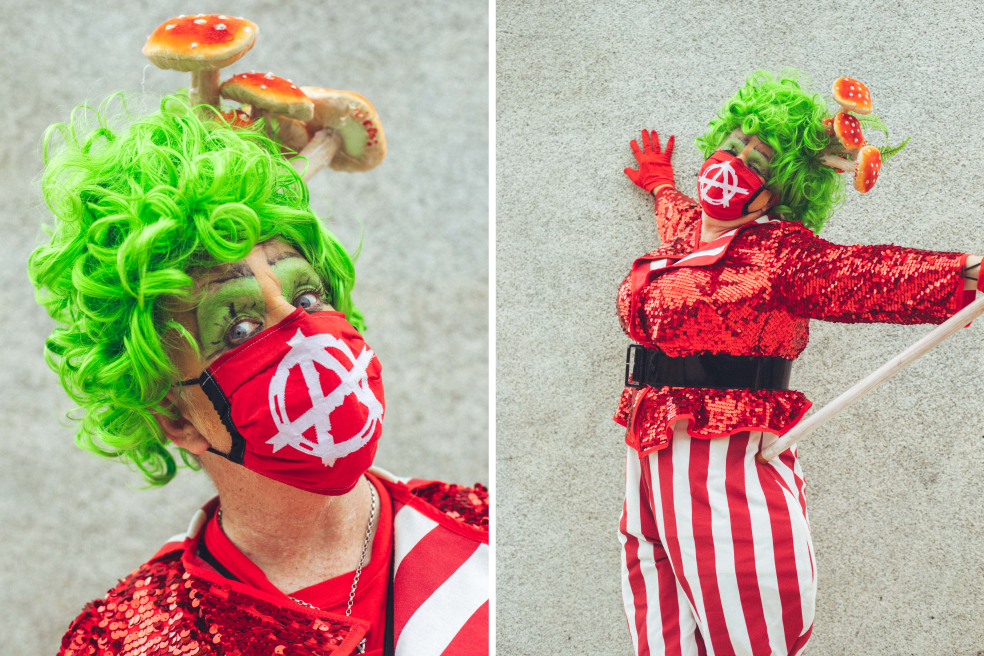 “We’ve been stricken for the last eight months by a natural disaster in the shape of COVID-19, which causes us problems on many levels, because the entire business of theatre is to draw people together, of course at the moment that’s not possible. What is possible though, is to support the arts and the industry through a difficult time so that it survives. Our government don’t seem to value the industry or recognise the amount of money that it turns over and puts back into the exchequer.

If we don’t support the industry now, it’ll be lost and not only will we lose the vibrancy the art brings to society, we’ll lose a huge amount of money. If you count the amount of money that will be lost to the exchequer by allowing the theatre industry to collapse, purely on that level, it should be worth salvaging.” 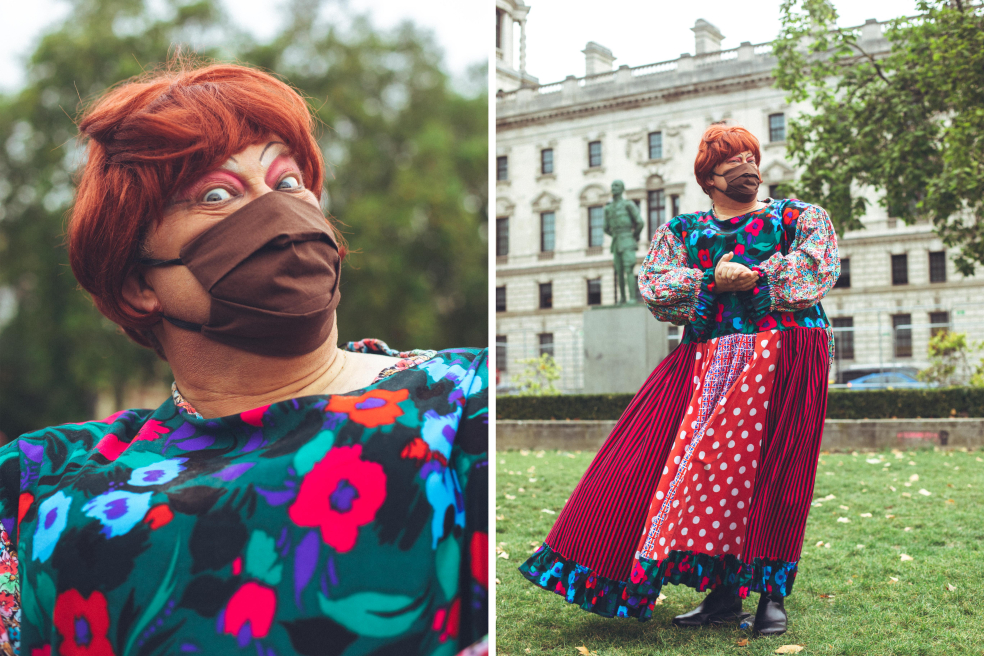 “I’m here showing solidarity with my colleagues, some of whom haven’t received any assistance from the government at all. Actors are very resilient people but legions of people are leaving the business because they’ve got to pay the bills and some of those will never be able to afford to come back.

It’s been an apocalypse and it threatens something which is really quite essential to British national life. The pantomime is many people’s first experience of live theatre. Almost everyone has found their livelihoods terribly affected by the pandemic but we’re suffering even more because of the government’s attitude” 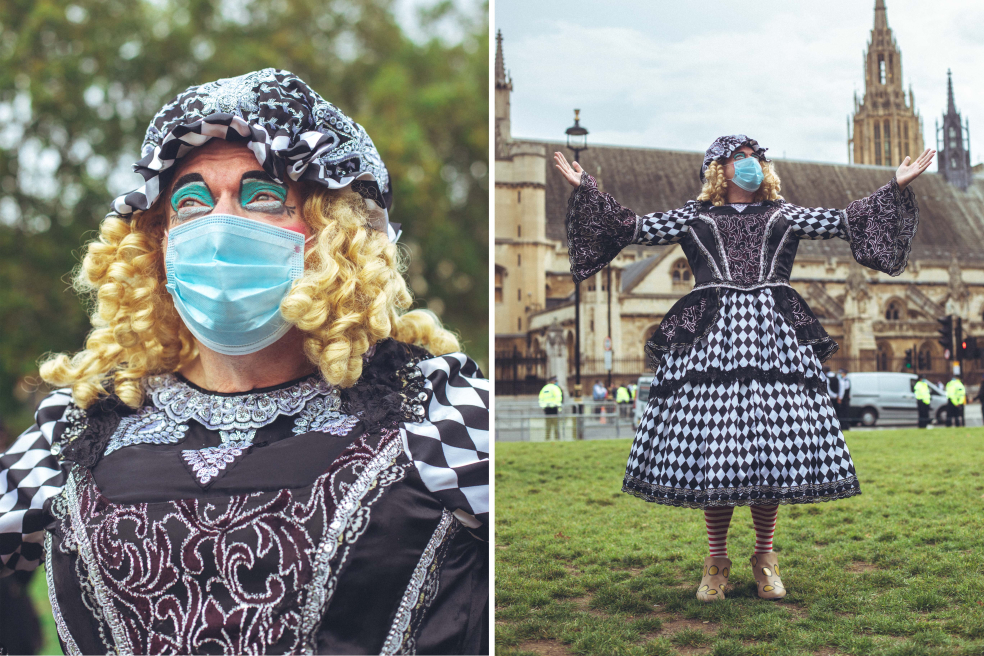 “I suffer with depression and anxiety but it’s tripled over the past few months. I’ve had four jobs cancelled over this year so I haven’t been able to earn a penny. Panto is my forte… but this year, so many people are going to miss out.

On top of that, hundreds of thousands of people are not able to work, and it’s such a sad situation for everybody. I know several friends that haven’t received a penny from the government. If they’ve told us to stop working then they have to support us. I know it’s not easy, but it’s people’s lives that we’re talking about and they need to be listened to. We need to be listened to.” 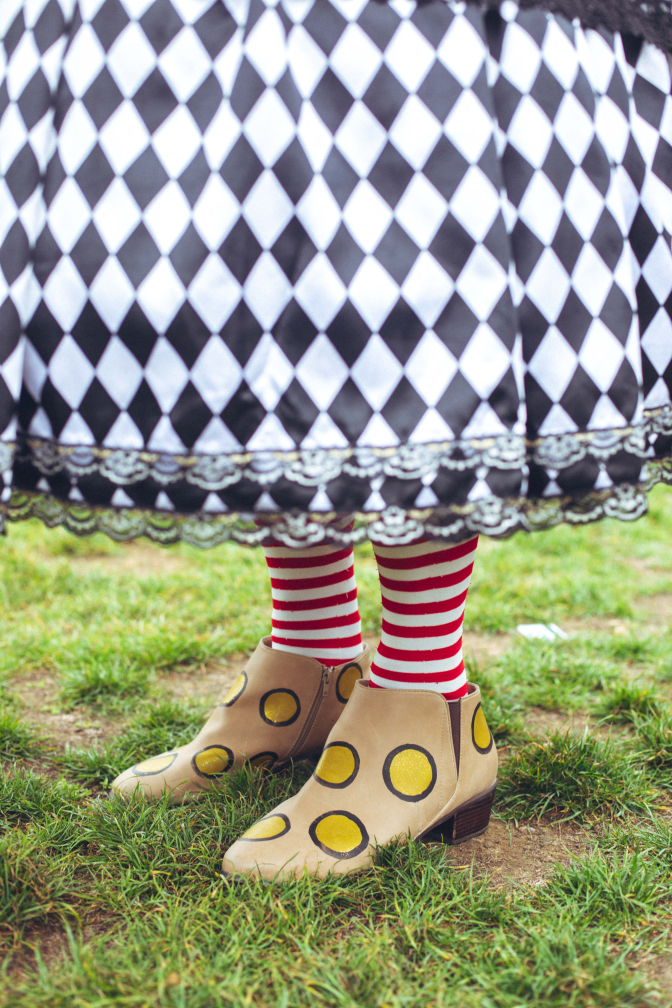 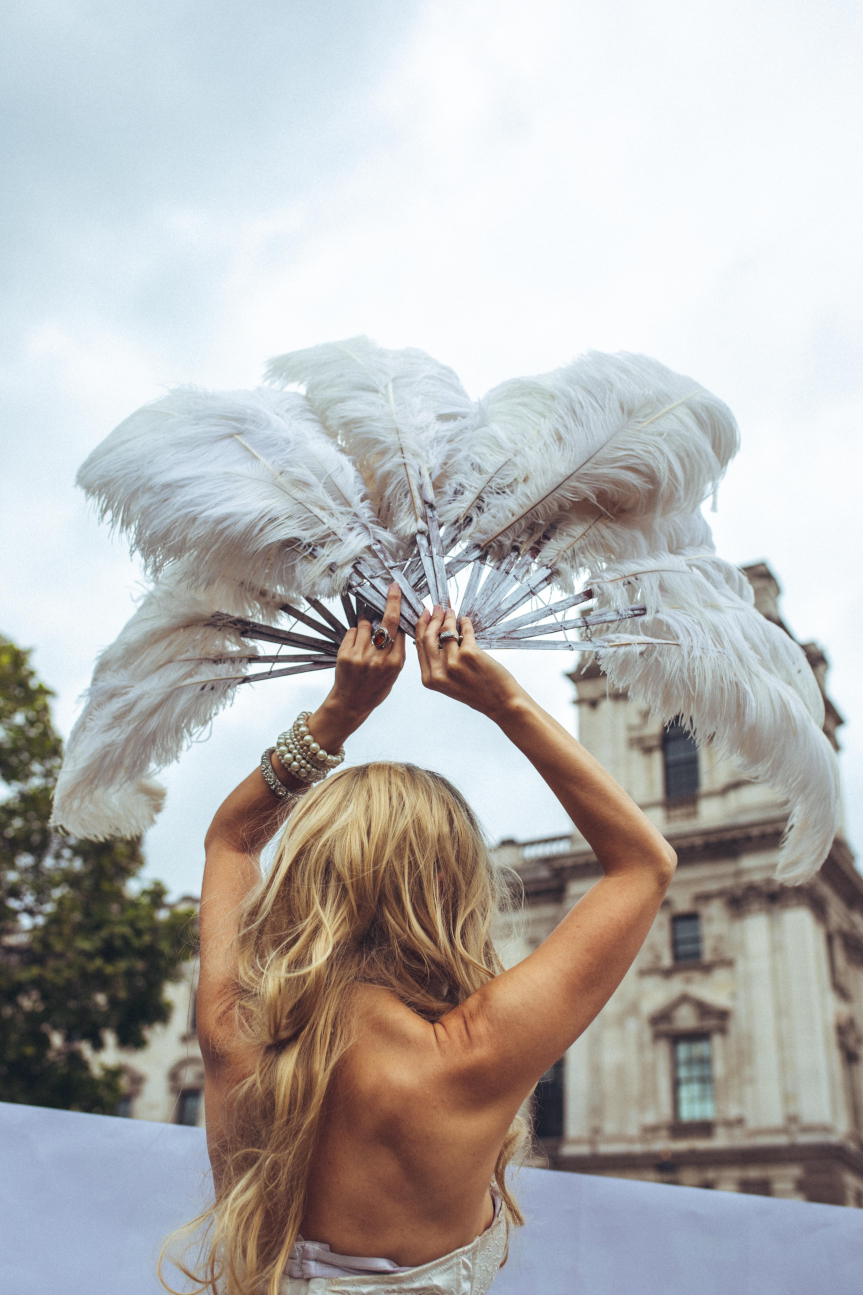 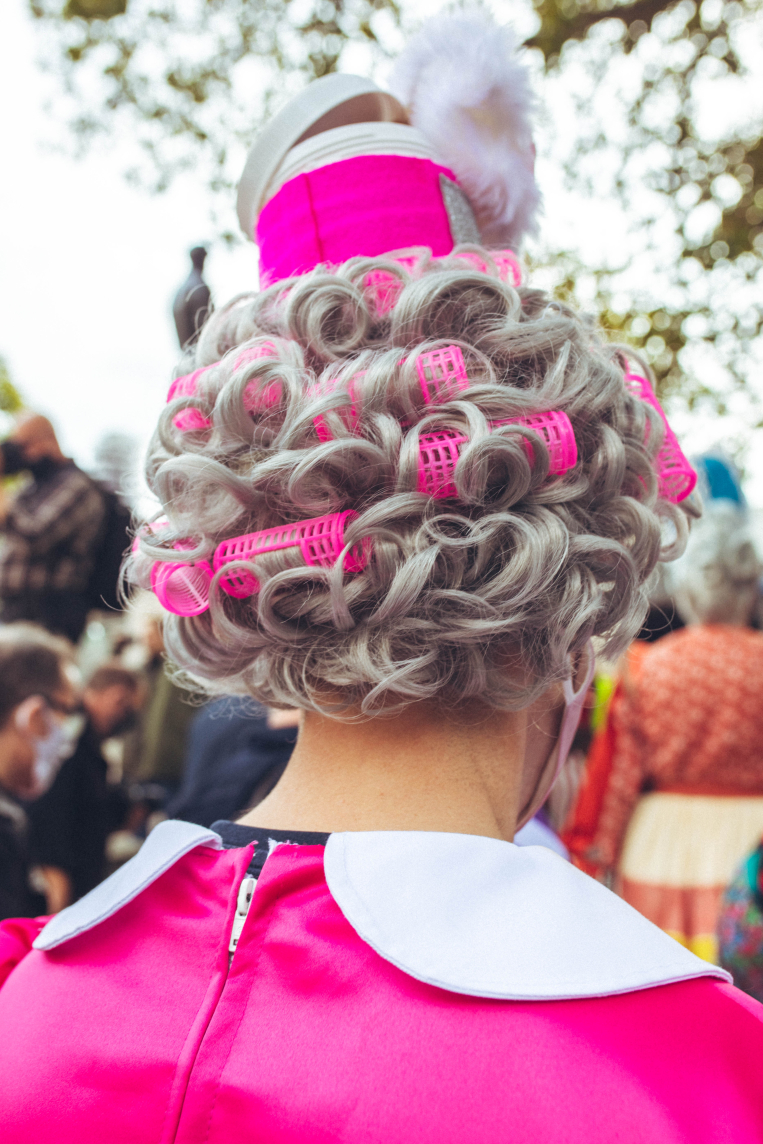 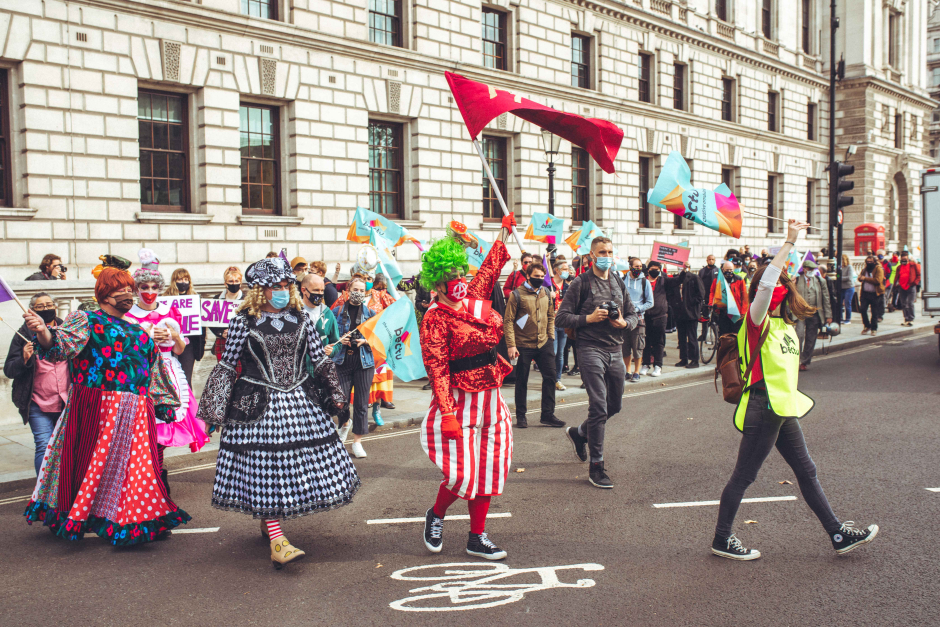 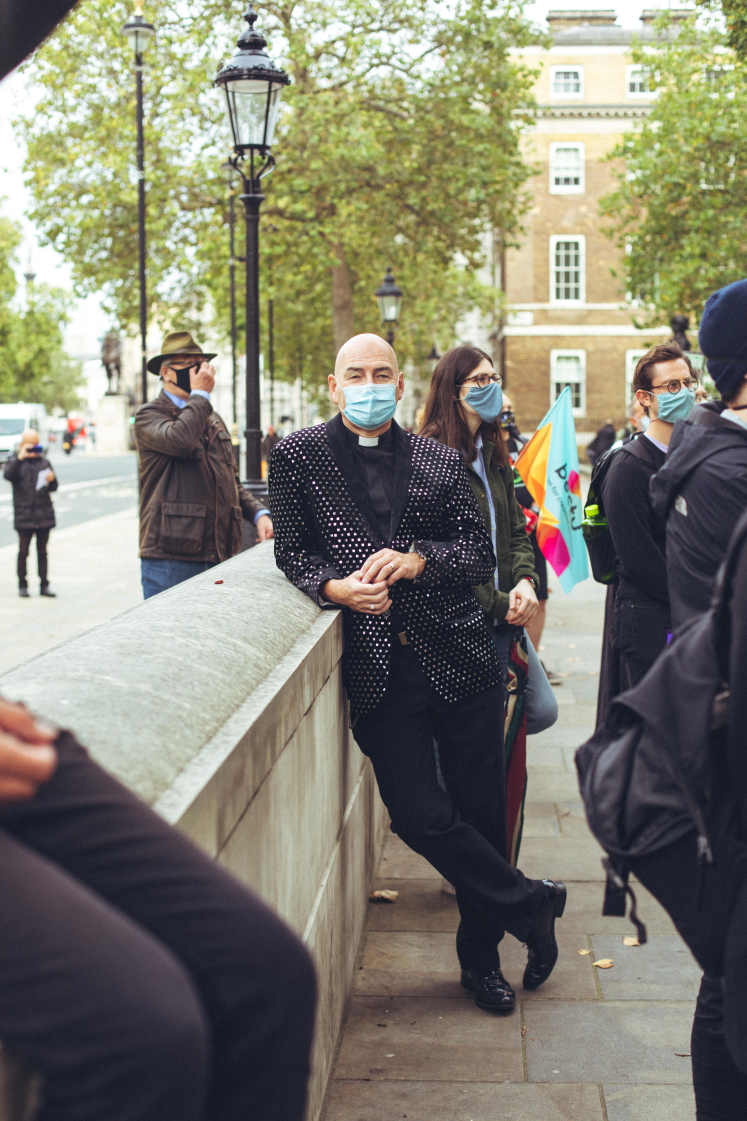 Find out how to support entertainers by visiting Equity Union’s website.

Linkedin
RELATED ARTICLES
OTHER ARTICLES
Whether it's partygate, the climate crisis or the spiralling cost of living, the fightback begins on the picket lines writes Tommy Vickerstaff
The singer-songwriter discusses her intimate new project – and the advice she’s picked up across a career as one of rock’s leading voices.
A new edition of a seminal book brings together iconic images of the band onstage in their full glory and backstage in moments of unguarded camaraderie.
Photographer David Hoffman recalls documenting the extreme wealth inequality around Tower Hamlets and Hackney int the 1980s.
In the latest instalment of Photographers in Conversation, the chronicler of raves, protests and beyond explains why he’s drawn to such specifically visceral environments.
On the fifth anniversary of the tower fire, around 18,000 joined the walk to remember the 72 dead and to demand justice.