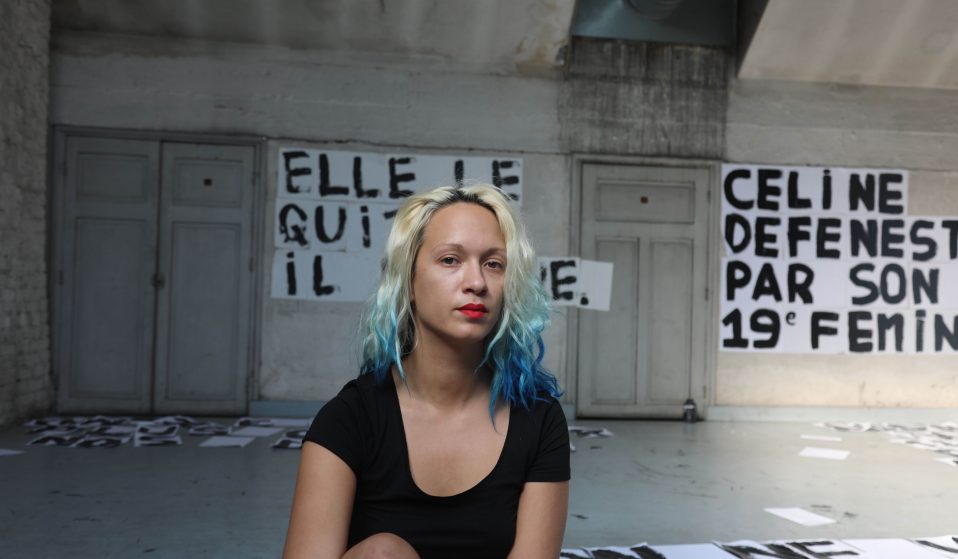 The nameless movement has been plastering urgent messages on walls across the country, to draw attention to a rising tide of violence again women: ‘Our objective is simple: for the deaths to stop.’

The nameless movement has been plastering urgent messages on walls across the country, to draw attention to a rising tide of violence again women: ‘Our objective is simple: for the deaths to stop.’

“This one might just work,” says Juliette with a grin, running her fingers along a bare stretch of wall a few blocks away from the Pompidou Museum. Two other silhouettes soon join her, large buckets in hand, to inspect the dimly-lit façade.

After a nod of agreement, one runs across to check the adjacent streets for signs of police, whose patrols often bisect these bustling quarters of central Paris. The trio then kick into frenzied action – working with all the intricate mechanics of a steam engine – and lather the wall with layers of viscous glue before attentively plastering on two dozen sheets of white paper.

With barely more than a minute gone, the action comes to an abrupt halt. The young women momentarily survey their work, pack up their tools and leave. The message in thick black paint reads: “13.01.2019. CELINE SHOT BY HER BOYFRIEND.”

The action was carried out by a burgeoning activist group in France, who are covering the walls of cities around the country to protest against femicide – the murder of women because they are women. On average, there is one murder every two days. 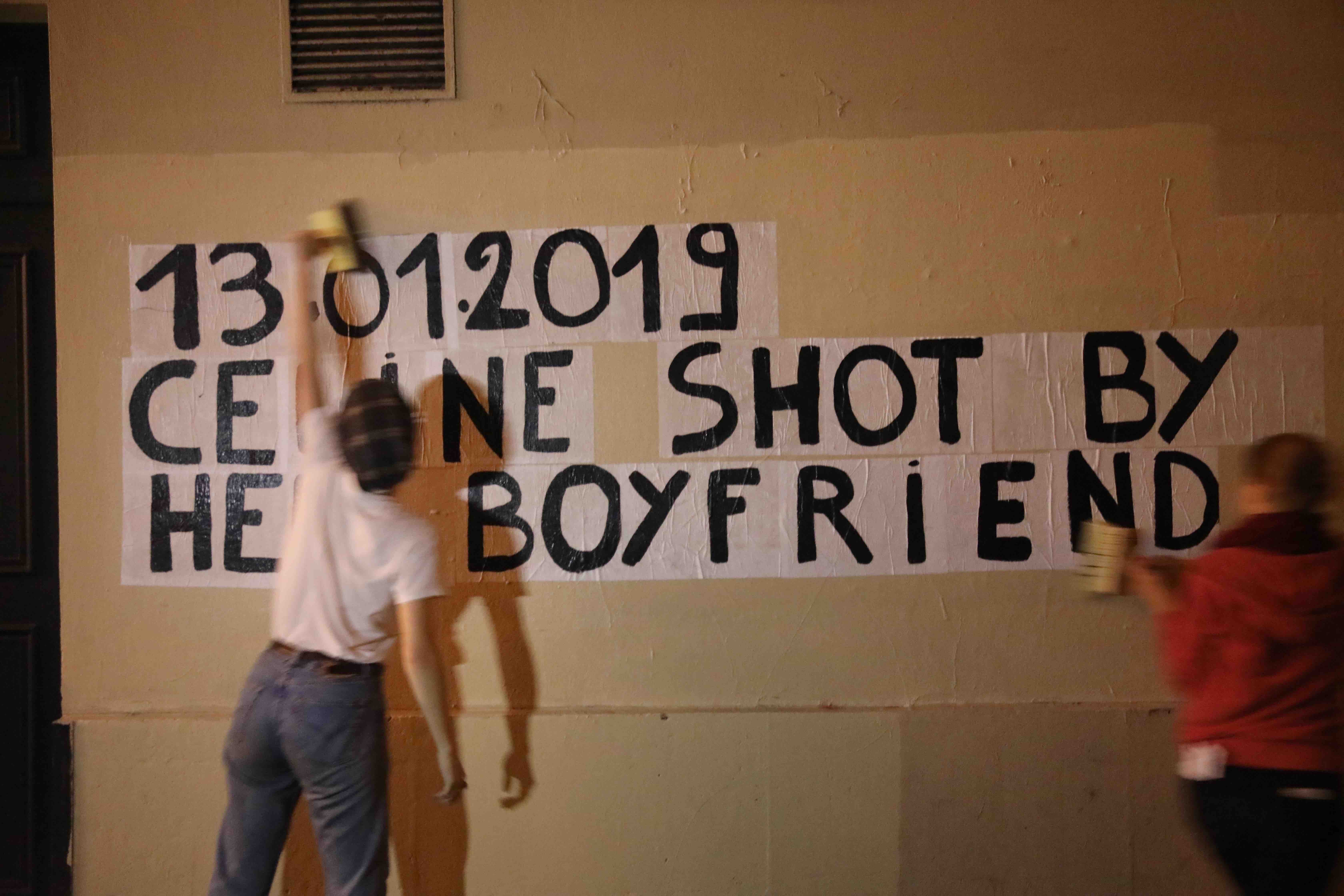 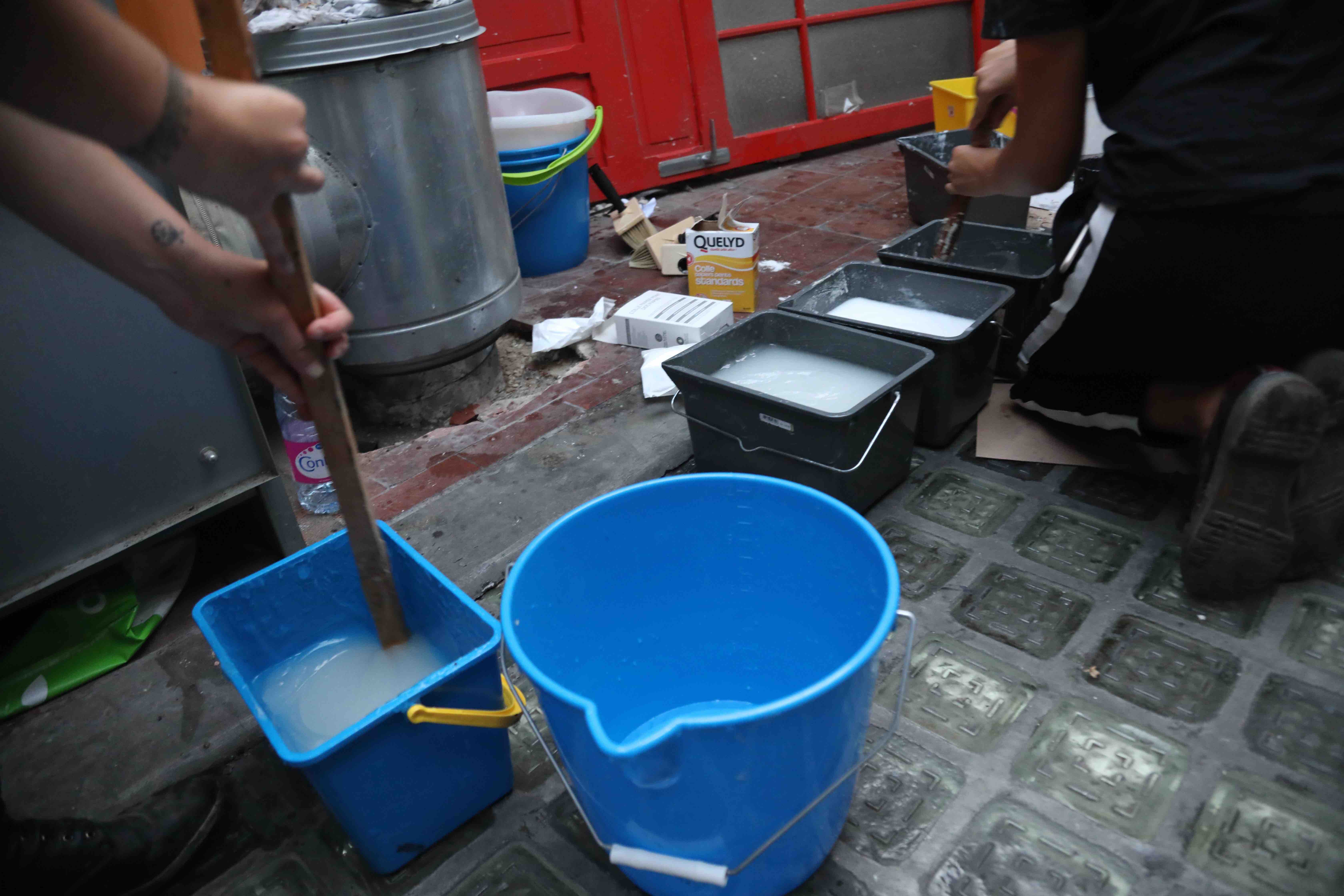 On August 30, 99 women had been killed in France since the beginning of the year. It was on this day that the nameless movement – based in Paris but reaching across numerous other French cities including Marseille, Bordeaux and Lyon – decided to take action in the streets.

“Our objective is simple: for the deaths of these women to stop,” says Marguerite Stern, the 29-year-old activist who started the movement. “It’s grown so much and now there are groups all over France. We want people to realise that this is happening to real women and they are real stories. It’s an emergency we’re facing in France.”

More than 500 posters across Paris alone have been put up so far, in locations like the Louvre, the National Assembly and the Senate. It’s likely that everyone who has walked through the French capital will have seen one, with some messages in English, Spanish, Portuguese and Arabic to maximise audience.

Every afternoon, the group, mostly women aged from 18 to 30, assemble at the movement’s headquarters on Boulevard Saint-Jacques – the sun-lit top floor of a multi-story convent-turned-squat called Jardin Denfert in southern Paris.

Dozens come every day, many for the first time. “It’s time to act, and this is one of the ways that I can,” says Agathe, an 18-year-old physics and chemistry student. 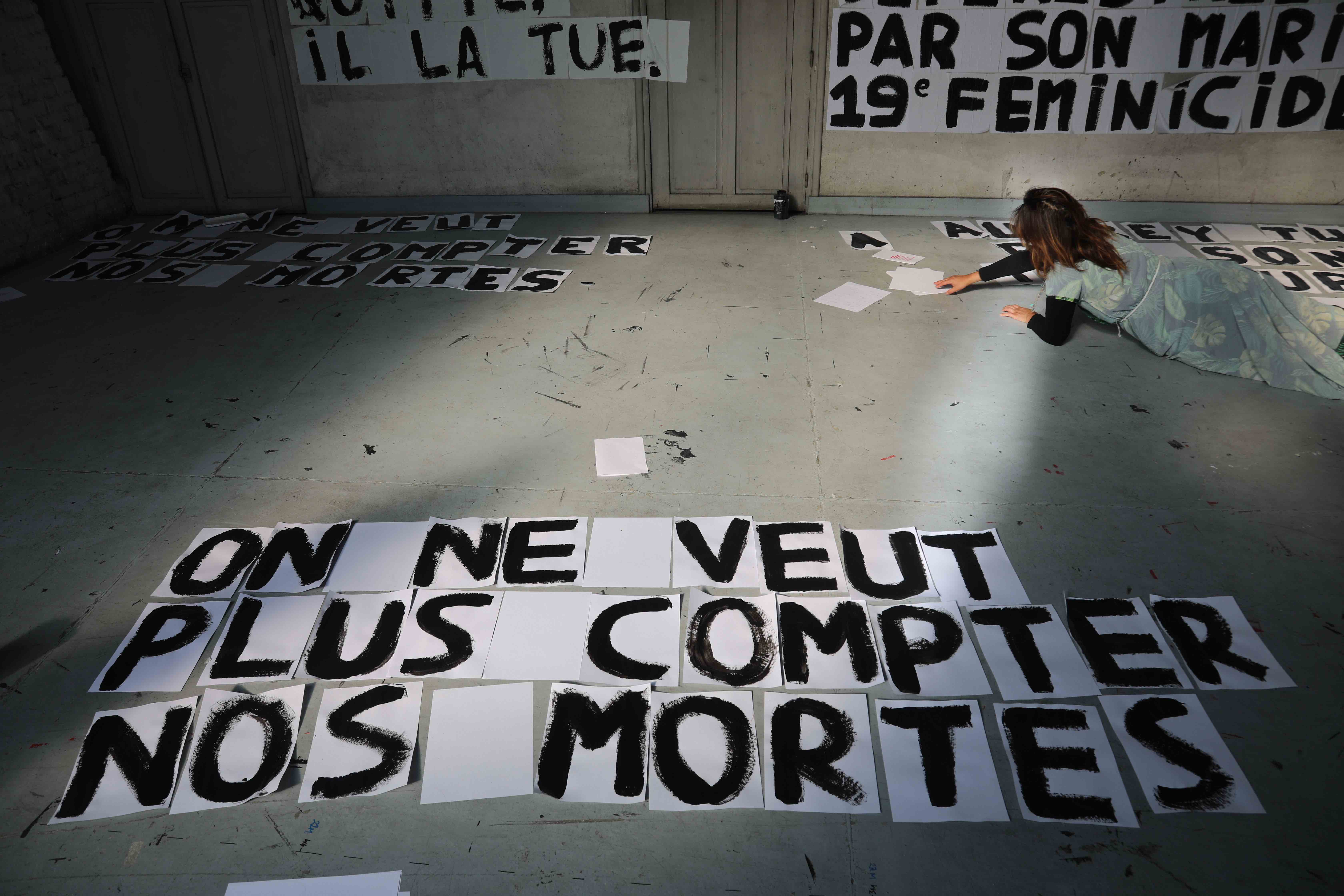 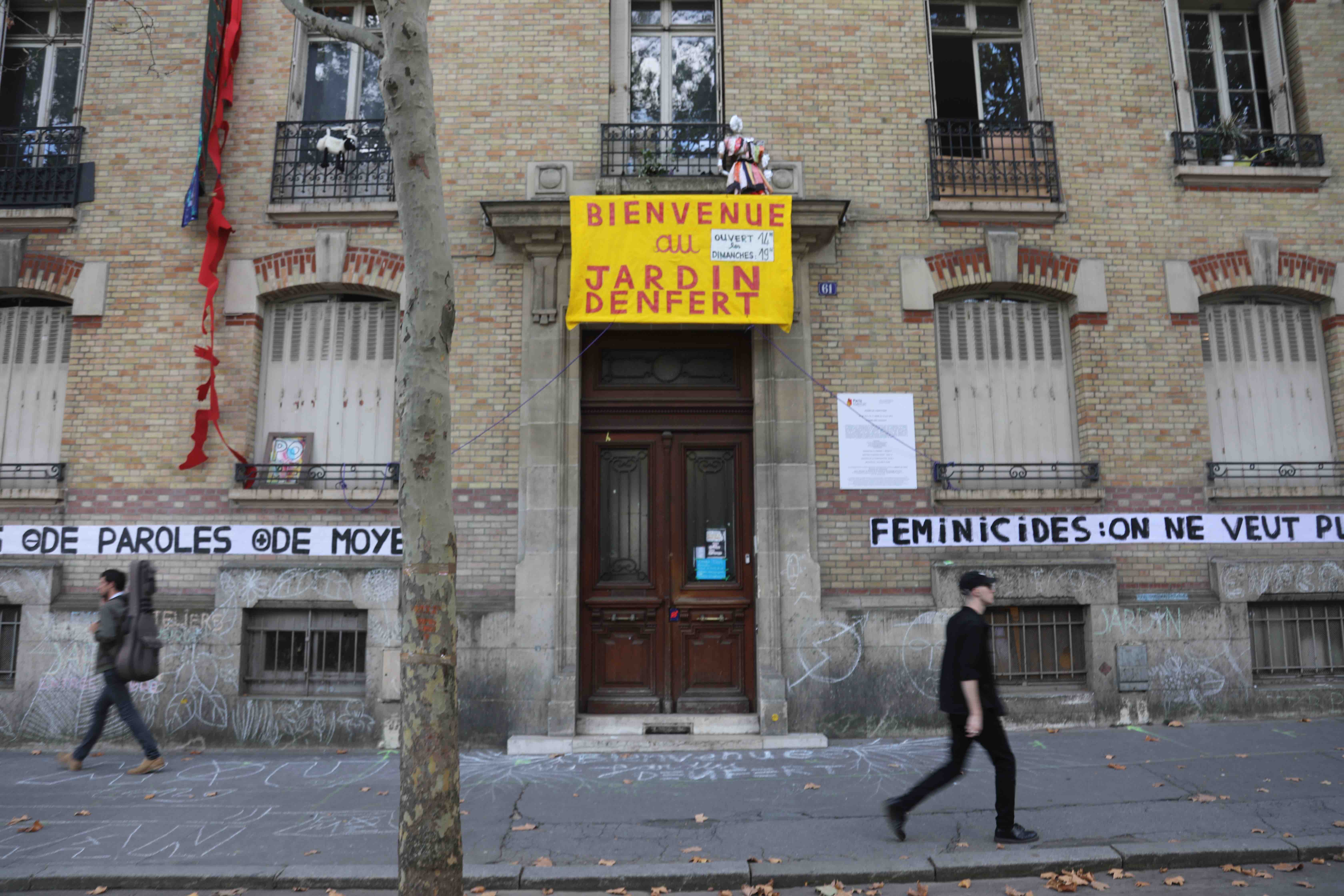 “I am a feminist and this is a way for me to engage in the movement,” adds Maiwell, 23, who has come here for her second time.

“It’s a way for women to reclaim public space, when normally we aren’t supposed to speak loudly,” concludes Louise, 21. “We are taking back possession of the walls.”

Along the wooden floorboards, slogans humanise the emergency: “CELINE, THROWN OUT OF A WINDOW BY HER HUSBAND. 19TH FEMICIDE”, “SHE LEAVES HIM, HE KILLS HER” and “WE DON’T WANT TO COUNT OUR DEAD ANYMORE”.

“We choose the slogans very carefully because often the media uses the wrong terms like conjugal drama or crimes of passion,” explains Stern. “No – these are assassinations and murders. Pregnant women have been murdered in front of their children, others with extremely barbarous attacks using knives, others crushed by cars.”

The death of 21-year-old Salomé in Cagnes-sur-Mer, southern France, was recorded as the 100th case of femicide this year. “She was telling him everything she thought and he did not like it,” one eyewitness told local media. “He hit her, hit her against the wall, stomped on her stomach, on her head.” 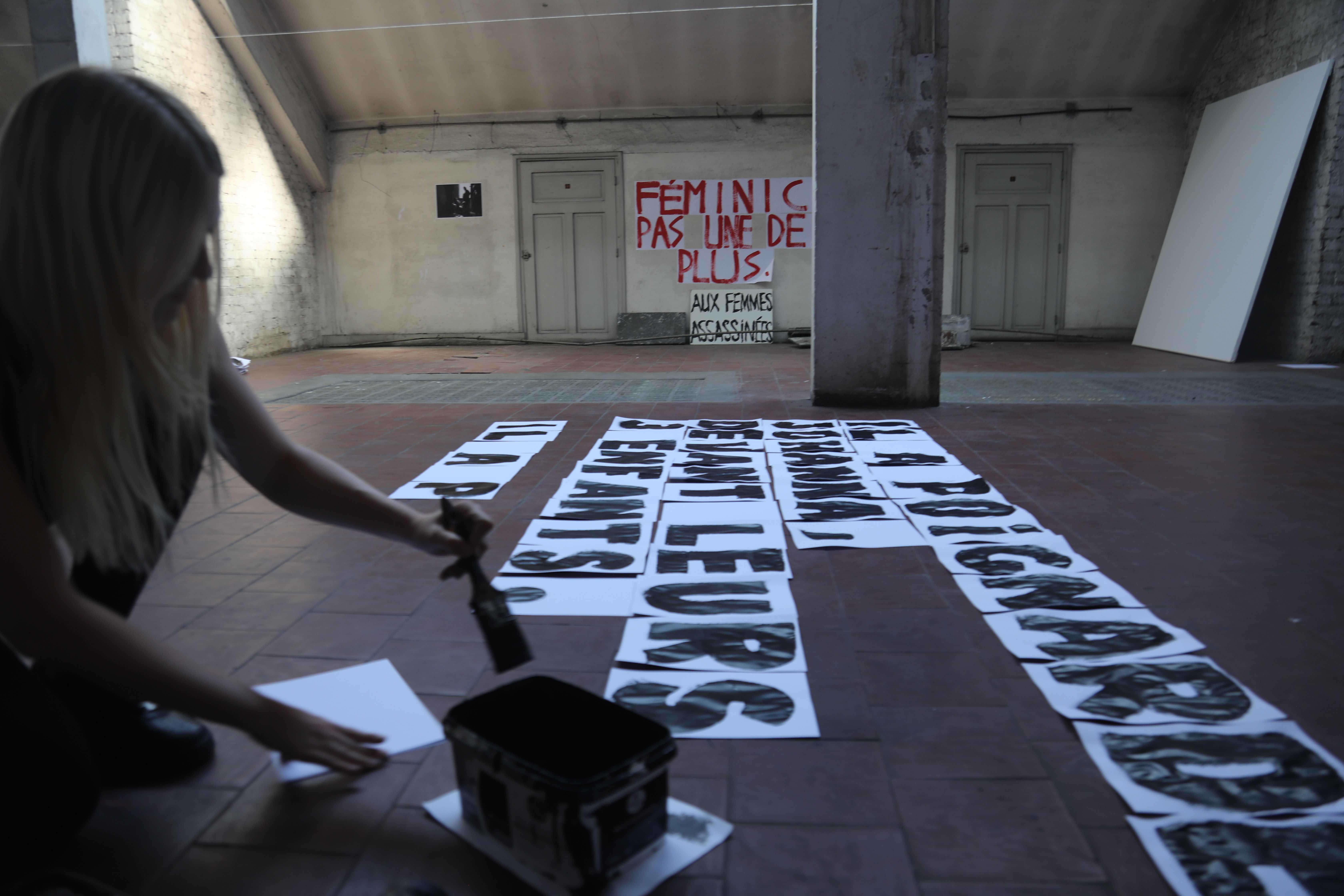 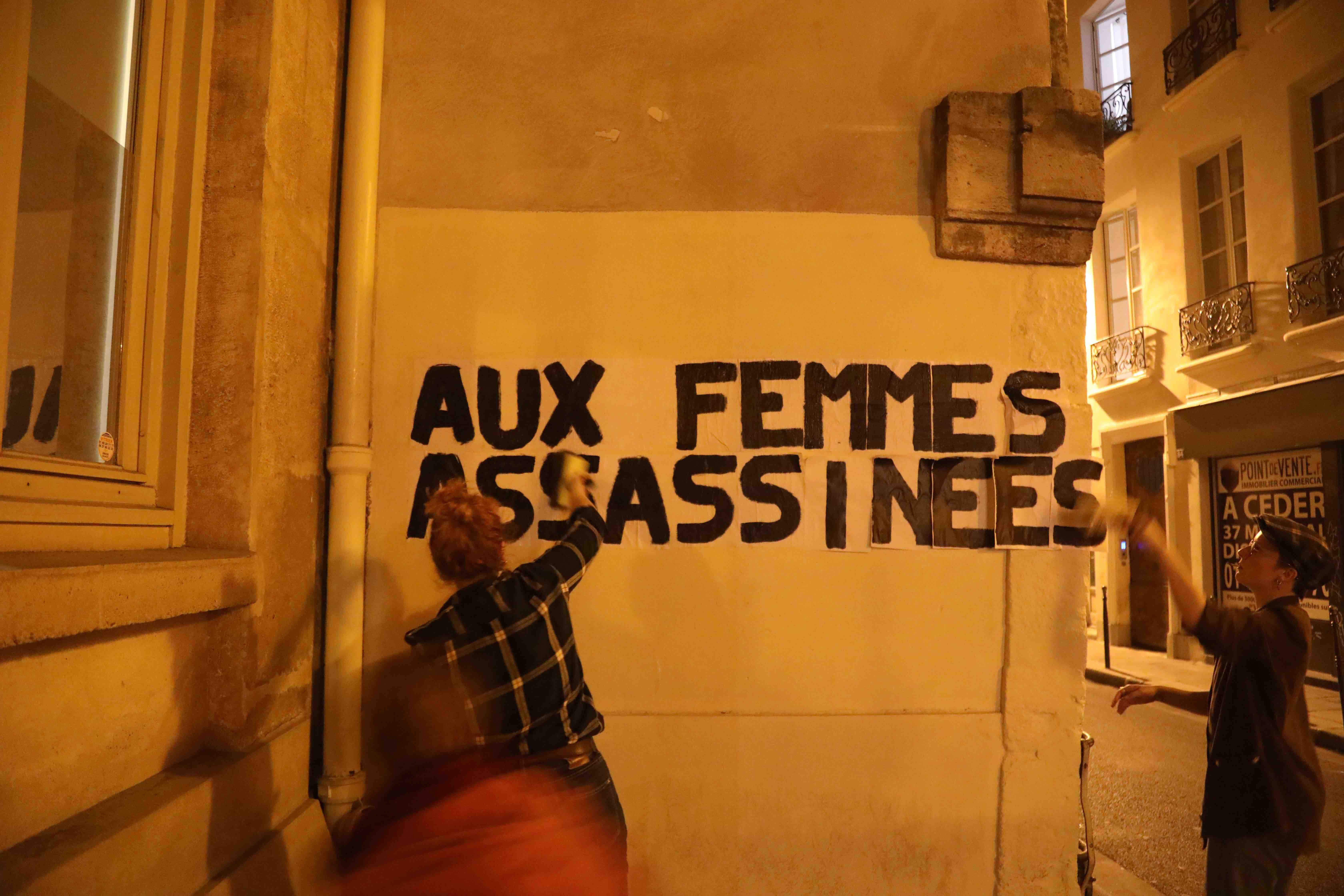 France has one of the highest rates of femicide in western Europe, with 0.18 victims per 100,000 women, according to Eurostat. Earlier this month, Prime Minister Edouard Philippe announced that €5m would be released for more emergency shelters and improvements to the complaints procedure. But the movement says this is nowhere near enough, with one charity saying the figure should be €1 billion.

“It’s completely ridiculous,” adds Stern. “All the women that have been victims of conjugal violence will see this situation not being taken seriously at all.”

Many point to Spain, which has invested heavily and developed special courts reserved exclusively for cases of sexual violence against women, as an example of how to successfully tackle the problem. But in France, the movement has not always gone down well with authorities, who have recently been fining activists €68 each for postering.

Back in the street, however, the movement has found a wide audience and popular support. Passing through the lamp-lit alleys of Paris at night, Juliette and her fellow protagonists draw the attention of two old ladies passing by. “What you are doing is courageous and necessary,” they say, before strolling off.

Linkedin
RELATED ARTICLES
OTHER ARTICLES
The two-day long event returned to London this year, showcasing a spectacular parade, steel bands and Caribbean food.
A 37-year-old woman shares how her abortion led her to become a clinic worker, and the abuse she’s received in that role.
By turning a real-life crisis into daytime television fodder, TV bosses have once again shown themselves to be completely out of touch with audiences.
A group of young Palestinians have found temporary freedom in the act of parkour, reimagining wreckage and ruins as a series of high-octane playgrounds.
Photographer David Corio’s archive offers a glimpse inside a revolutionary era of music and nightlife.
The idea that a younger generation is abandoning work has become a popular narrative online, but it doesn’t necessarily reflect reality.