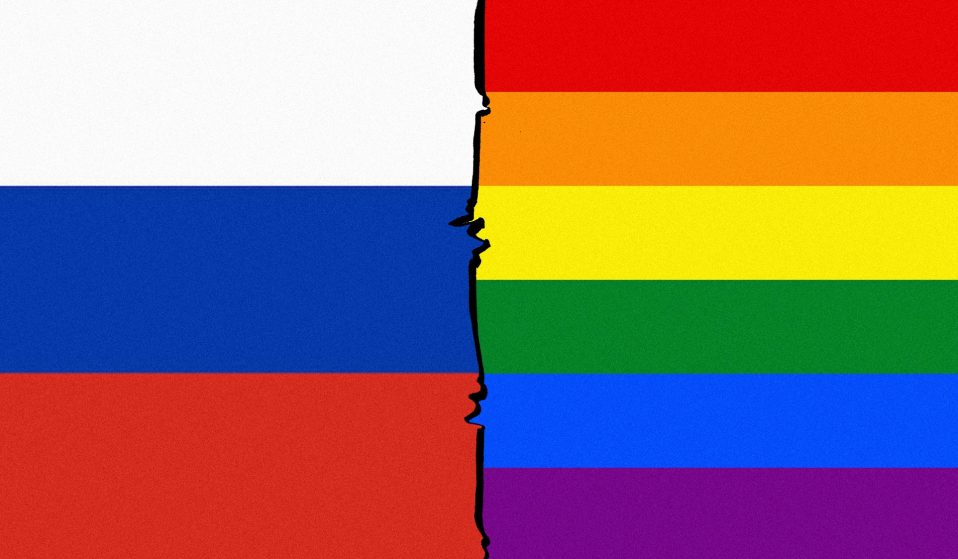 Early last year, a sinister Russian website created by a group known only as ‘Saw’ emerged online. Its homepage was emblazoned with the eerie face of Saw’s Jigsaw Killer, and splashed across this was a headline which translates to ‘Chechnya Comeback’ – an obvious reference to the country’s past ‘gay purges’, which saw hundreds of LGBTQ victims beaten, tortured and killed.

The ‘Saw’ website similarly aimed to incite violence by publishing a detailed ‘kill list’, which featured the names, addresses and photographs of prominent LGBTQ activists – and the promise of a cash reward for successful attacks.

41-year-old campaigner Elena Grigorieva was just one of several names included. A longtime activist, she came out as bisexual earlier this year and soon received a steady flow of death threats. These threats became more severe and more frequent in early July, when her name was first listed. Fearing for her life, she teamed up with local activists and ultimately succeeded in shutting down the site, but on 18th July she posted a Facebook status urging her followers to stay vigilant and pressure law enforcement to find the creators and bring them to justice. Two days later, she was murdered.

According to reports, she had been strangled to death, with wounds indicating she had been stabbed eight times in her face and back. A 40-year-old was quickly arrested and then released, but authorities suspect several people were involved in the dispute. Earlier this month, another suspect, Alexey Volnyanko, was arrested. According to Crime Russia, he confessed to murdering Elena while drunk after she called him a “loser”.

However, friends have said that they believe Elena’s activism played a role in her death. Authorities are refusing to investigate potential links between the website and Grigoryeva’s murder, and although it remains offline for the moment, past shutdowns have only been temporary.

Although website creators have extorted people on the list and provided enough detail to ensure attacks could pass without difficulty, authorities are seemingly refusing to investigate the website at all. For frustrated activists, this news should come as no surprise; late last year, the country’s police force justified its failure to investigate homophobic hate speech by arguing that LGBTQ people don’t qualify as a protected group under hate crime laws.

This lack of action has sparked campaigns by NGOs like All Out, which defends the rights of vulnerable LGBTQ people worldwide, to bring down the list. “By publishing an anti-LGBTQ blacklist, the Russian group ‘Saw’ has been inciting their supporters to violence,” Senior Campaigns Manager Yuri Guaiana outlines in an email to Huck. “This is a serious crime and must be treated as such.”

According to The Independent, Elena’s friends said that the death threats, some of which included images of daggers and extreme homophobic slurs, were reported to police, who ultimately ignored them. The police denied ever receiving the information. The Russian LGBT Network’s research found that no attacks had been directly linked to the website, but whether or not the list was the root cause of Elena’s murder, it’s clear a more detailed investigation is needed.

“It’s so important to talk about this climate of impunity,” says Svetlana Zakharova, a representative of the activist collective. “We do not know why Elena was murdered, but I am sure that ‘Saw’ is a project created to make LGBTQ people feel scared and targeted. The fact that this has existed for more than a year and that nobody has been punished sends a very dangerous message.”

All Out’s petition has already racked up more than 30,000 signatures, but activists on the ground are calling for more support and opening up about the fear they’re feeling. “My name is one of many which was mentioned there several times,” says prominent LGBTQ activist Mikhail Tumasov in an emotional campaign video. “I don’t know what can happen to me, my family or friends, because we don’t know what kind of people are behind [this site].” It’s clear that Elena felt this same terror before she was killed; the death threats became so intense that she even made arrangements for a close friend to look after her cat in the event of her murder.

The website is part of a wider problem within Russia. It’s a known fact that ‘hunters’ stalk LGBTQ dating apps to find, blackmail and then torture queer victims; the country’s notorious ‘gay propaganda law’ is still effectively gagging activists and punishing queer youth; even the internationally condemned attacks in Chechnya were met with a laissez-faire attitude by Chechen authorities, leaving victims without justice. Russia could have overruled this and forced an investigation, but ultimately chose not to.

To say that lives are at stake is no understatement. Earlier this year, Russian LGBT Network volunteer David Isteev was one of several activists reportedly subjected to an aggressive home invasion, which was later referenced in some of the death threats sent to Elena. Attacks like these make it unclear whether the ‘Saw’ group is directly involved, and even what they want: the aim could simply be to strike fear into the hearts of LGBTQ people, or it could be motivated by extortion and cash bribes to remove names from the list. But questions like these currently look unlikely to be answers – at least unless campaigners worldwide continue to pressure authorities.

After all, if 2019 has taught us anything, it’s that protest can make change. The Sultan of Brunei sparked international outrage earlier this year by announcing he would finally introduce a penalty of ‘death by stoning’ for homosexuality. A celebrity-led boycott of his hotels ensued; around a month later, the Sultan backtracked.

Russia’s queer community needs this same support, especially as its activist groups are already strong. Queer nightlife scenes are cropping up in major cities like Moscow and St. Petersburg; the work of vital platforms like Novaya Gazeta, whose editor was forced into hiding after breaking news of the Chechnya ‘purge’ back in 2017, continues despite violent resistance; even LGBTQ youth are turning to [encrypted messaging app] Telegram to evade censorship and publish queer media on their own terms.

Incremental change is undeniably being made by these determined campaigners, but in the tragic case of Elena Grigorieva and this gruesome ‘kill list’, it isn’t enough. Sometimes, international outrage is still needed to set the wheels of justice into motion.

Linkedin
RELATED ARTICLES
OTHER ARTICLES
The revered showbiz chronicler recalls his journalistic beginnings, documenting subcultural scraps in the ’80s.
The government is scrapping the Human Rights Act in a move that will hit marginalised people hardest.
While protests over abortion rights rage in the US, access to abortion services is still almost nonexistent in parts of the UK.
Following the release of his newly republished 1991 book, Redheads, the American photographer reflects on his celebration of ginger people and their magnetic power.
Members of the collective share some of their reasons to run as part of #UnitedBySummits, a campaign that looks to uncover transformative power of the outdoors.
The situation in Afghanistan remains dire, with many groups facing persecution at the hands of the Taliban.