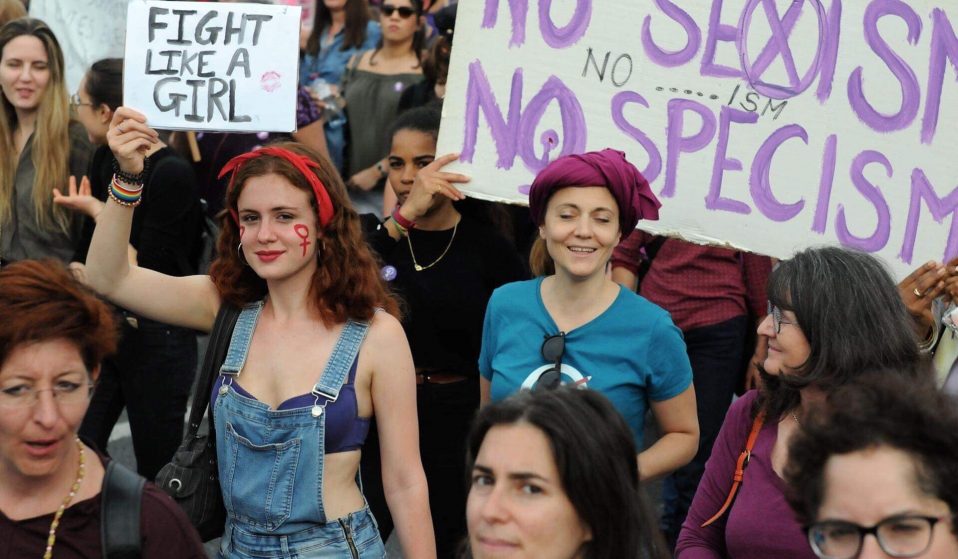 Earlier this month, the country saw the first women’s strike in nearly three decades, with hundreds of thousands of citizens taking to the streets. We spoke to the organisers to find out why it had to happen now.

Earlier this month, the country saw the first women’s strike in nearly three decades, with hundreds of thousands of citizens taking to the streets. We spoke to the organisers to find out why it had to happen now.

On a thunder-stricken Friday morning in June, tens of thousands of galvanised women donned purple and gathered in pockets across the neighbourhoods of Geneva. This would be the first women’s strike to sweep the city – and Switzerland at large – since 1991. Frustrated by the cavernous differences in wage and workers rights experienced between men and women, activists of all ages and social backgrounds painted signs, sang songs native to their origins, and marched side-by-side in hopes of raising global awareness of their mistreatment. A nationwide strike also took place later that afternoon, with workers abandoning their posts in protest and bringing their cities to a temporary standstill. So what’s the story behind it? Huck spoke with key organisers and participants from the event to find out how this call-to-action came about. 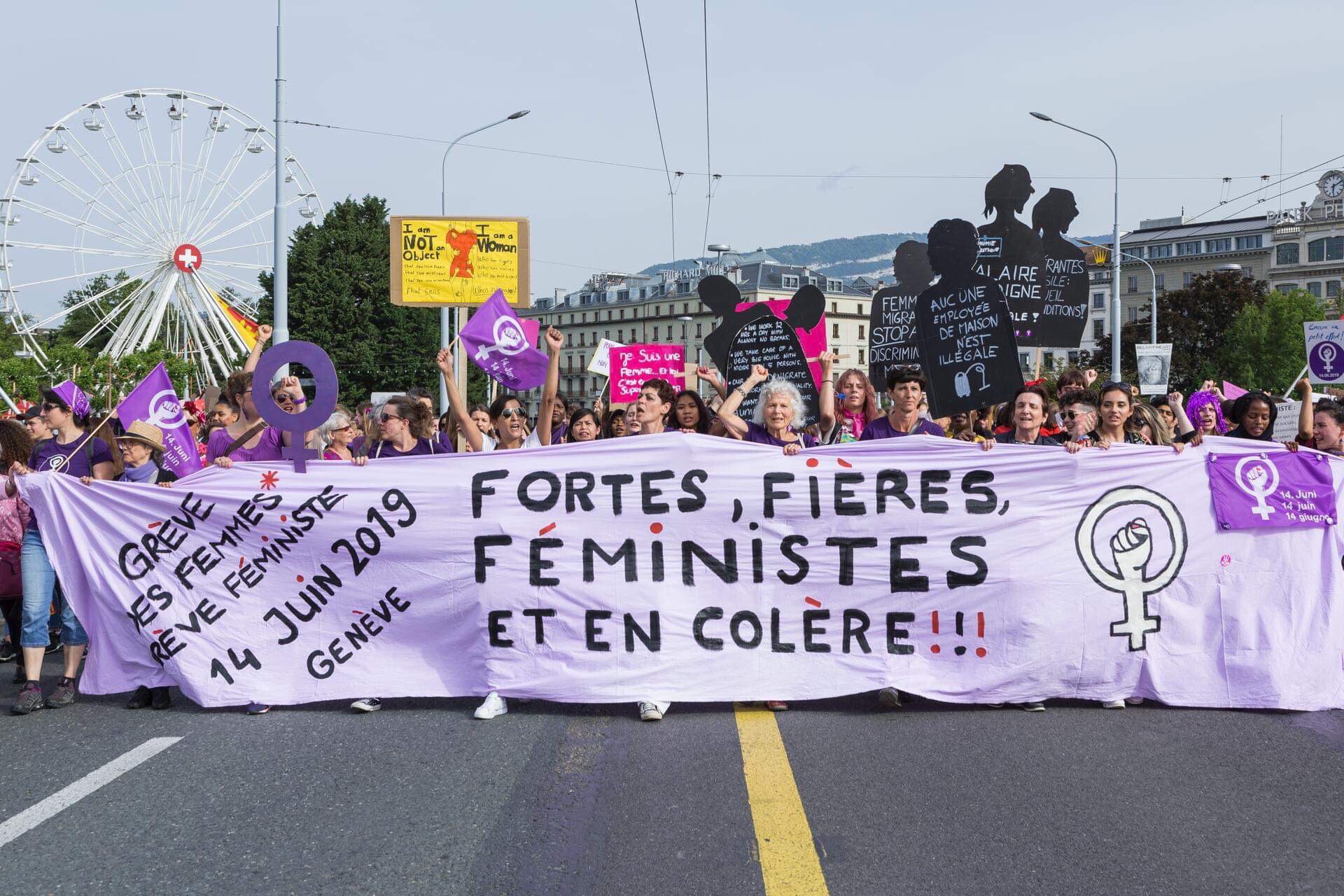 “I am a mother, and mothers are really discriminated against in the labour market in Switzerland. I was employed in my previous job for four years, and after my maternity leave I was dismissed without reason. This happens very often in Switzerland; women are dismissed solely on the basis that they are mothers. It happened just after I asked my previous employer for breastfeeding breaks, which are enshrined in Swiss legislature, but as there is no protection against dismissal during this period, employers can let women go if they ask for this.

As an unemployed mother, you then have to systematically prove that childcare is available in order to receive benefits, something that fathers never have to justify. This all happened during a time when I was feeling very vulnerable. I was lucky to have my family and husband, but many mothers have to face this alone. I had to fight for these women as well as myself. 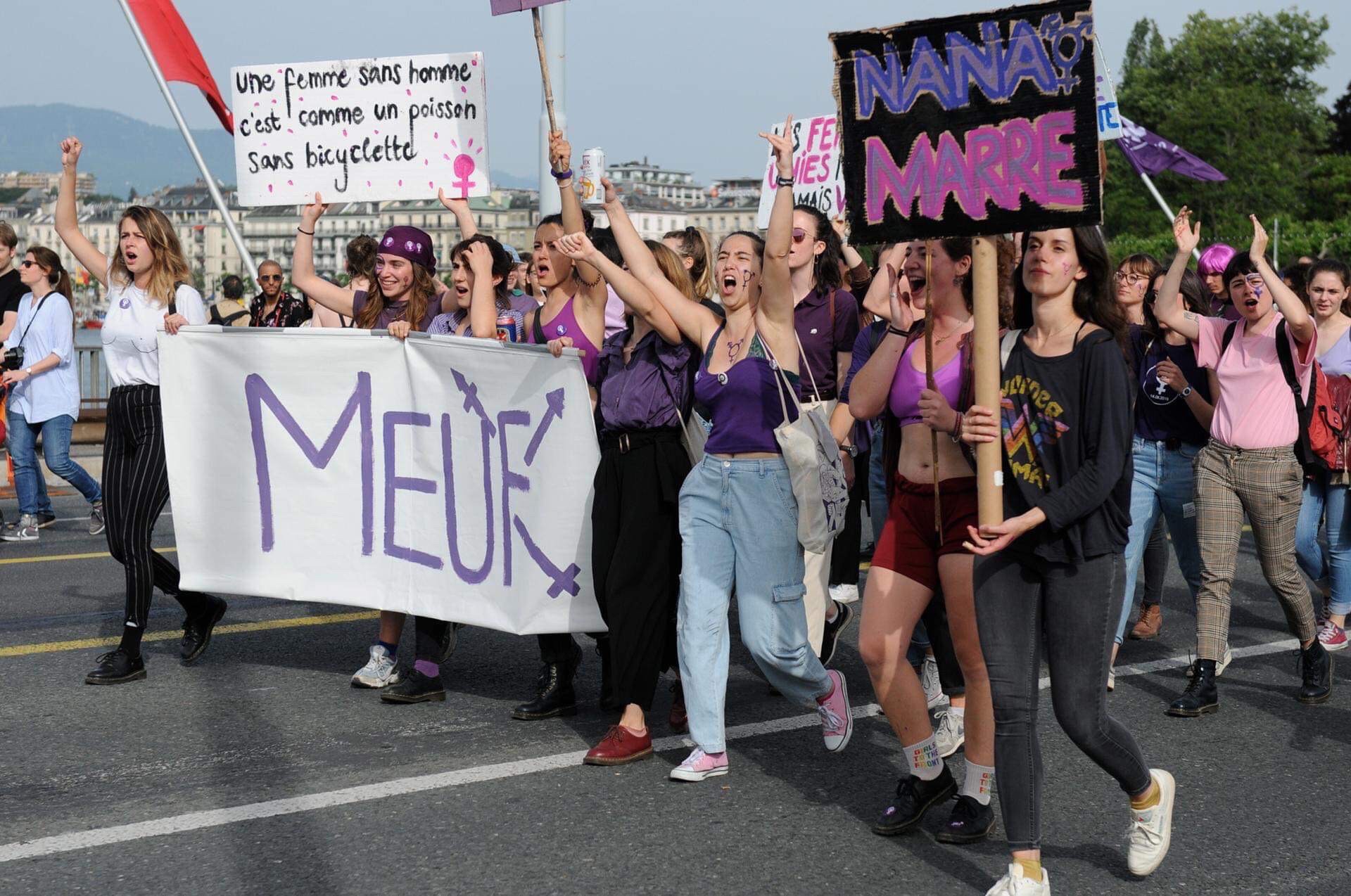 The 1991 Strike helped to politicise thousands of women, which in turn pushed Switzerland to take significant steps for women’s rights. This included the adoption of the Federal Law on Gender Equality, maternity leave, the right to an abortion, and measures to combat domestic violence. Today, however, we need new momentum! All Swiss women are exposed to sexism, discrimination, stereotyping and violence, in the workplace, at home or on the street. Over the past 20 years, we have witnessed the rise of neoliberal policies: funding for public services are threatened, social benefits are reduced, working and retirement conditions worsen.

The prevailing economic dogma wants to maximise profits at the expense of human beings and ecological balance. Women are the first to suffer as precarious workers, migrants or mothers, and are often solely responsible for the household and children. Currently, in addition to wage inequality, one woman out of seven loses her job as a direct consequence of pregnancy, and retired women receive only 63 per cent of the average pension received by men.

Today, according to figures in January 2019, women are paid on average 20 per cent less than men in Switzerland.

Our objective within our collective was to get women from across the whole country, from all conditions and origins, to unite and express their specific issues in relation to gender inequality. We wanted to create connections between women from different horizons, and have a huge purple wave sweeping the country. More than 540,000 people took part in the protests and marches across the country. More than 100,000 women marched in Zurich, some 60,000 in Lausanne, and around 30,000 in Geneva. Many of us had tears in our eyes as we watched the magnitude of the demonstration.”

“We’re made to believe that the only way a society can function is the way that has been set up by that of the standard male. If you look back on economic theory, it only has two dimensions of time built in: paid work and leisure. If women had been present in the discussion, the whole theory would have been set up differently, and we would not have the mess we have today.

Gender stereotypes are very strong in Switzerland; so much so that both women and men need to go through a long process to open their eyes on how gender impacts their everyday lives, and limits their possibilities in life. Switzerland may be a direct democracy, but it is also dominated by very conservative interests and has many active economic lobbies.” 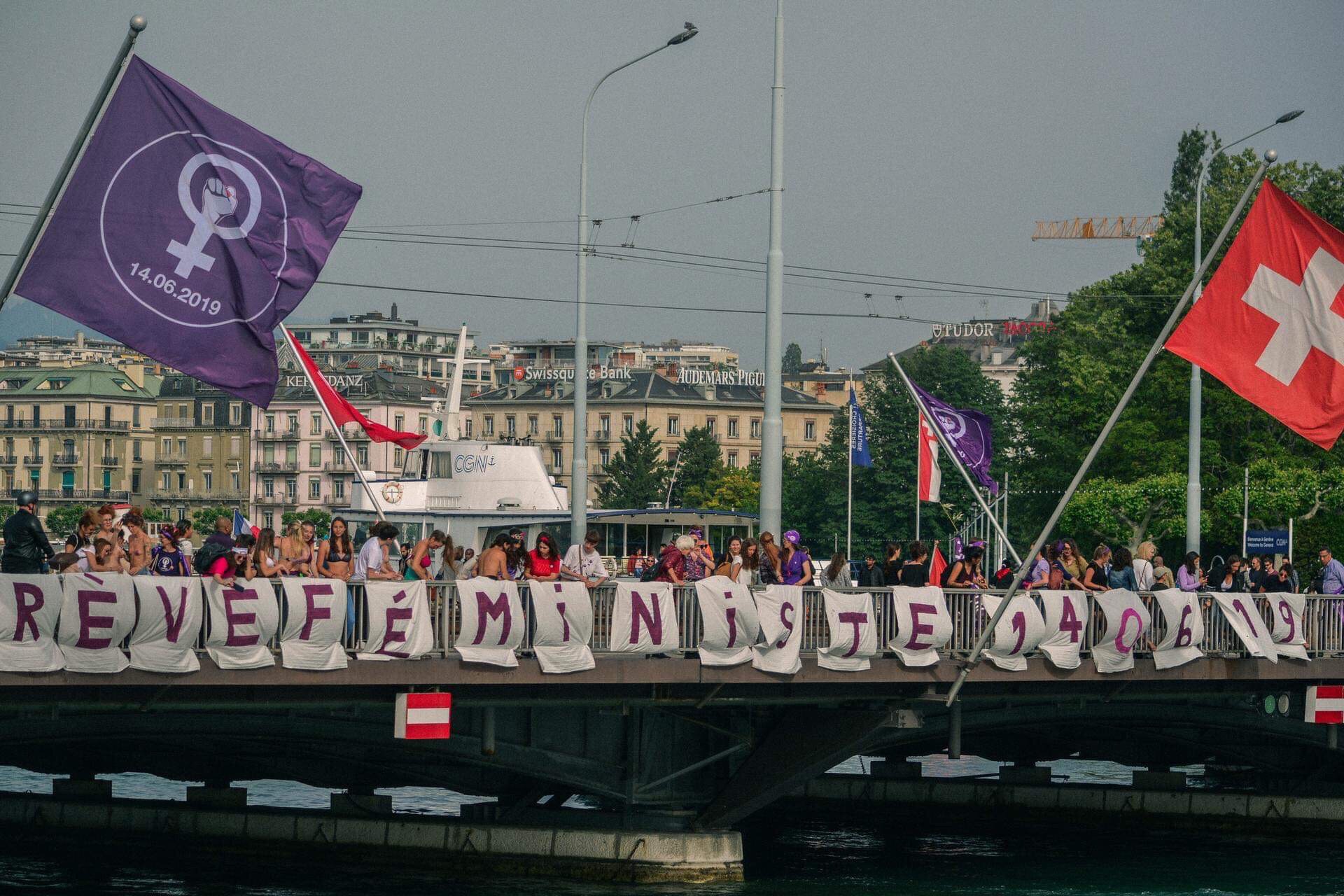 “I joined the strike because I believe it’s necessary to make our claims visible and combative. It gives women strength to meet other women who have the same claims within the same public space. I marched because of my fears of what my family life and professional life would look like in the future given Switzerland’s attitudes towards unequal parental leave, and to stand up against gendered models that tell us every day through the media how women or men should act.

I hope that our actions will galvanise change in many professional sectors as well as in our personal lives, and that younger generations will remember this strike and will integrate its messages into their lives as they become adults.” 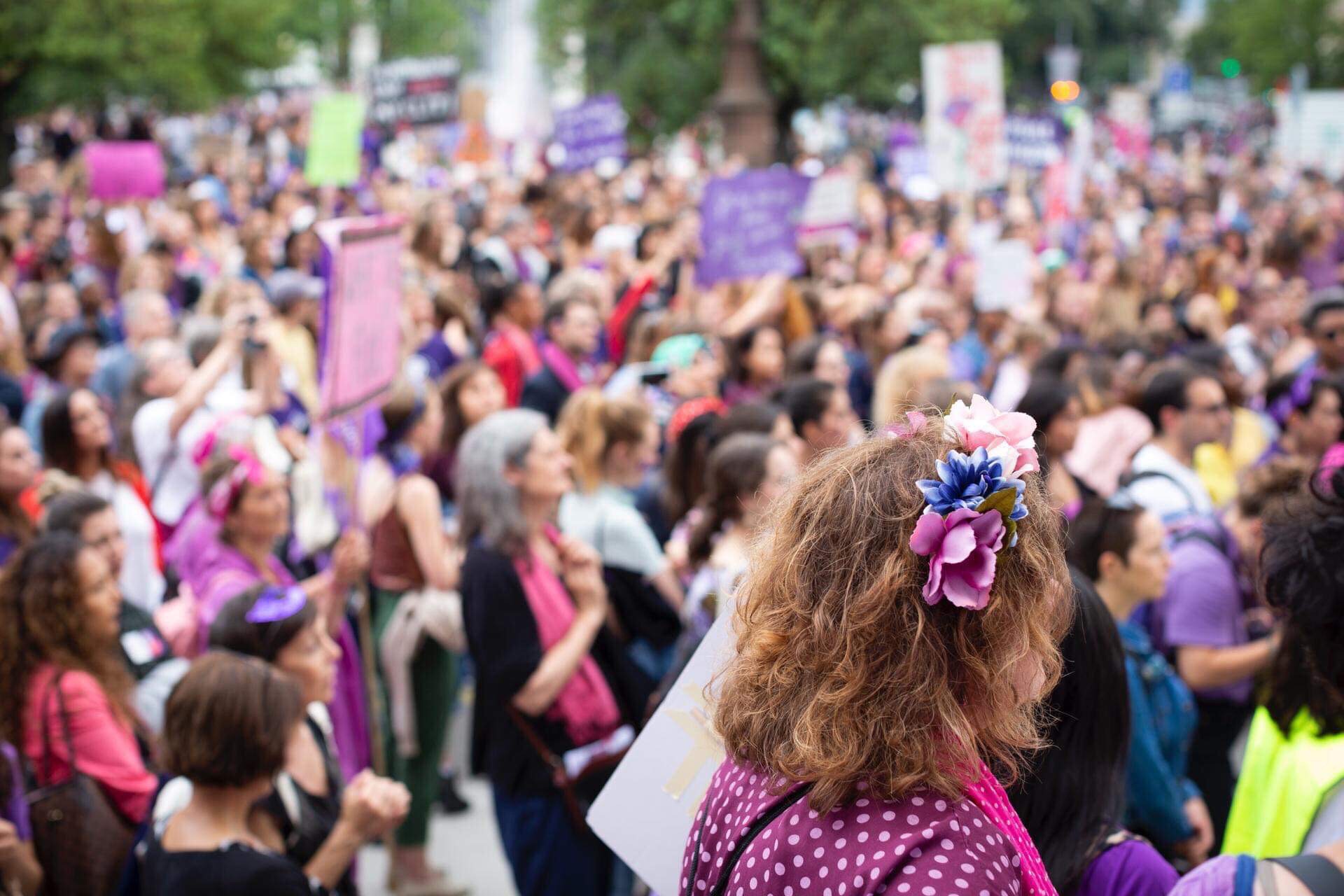 Linkedin
RELATED ARTICLES
OTHER ARTICLES
A new project is documenting formerly incarcerated people as they transition back into civilian life.
Birdy Chu reflects on documenting the historic moment in which the territory was formally passed back from the UK to China.
Following the announcement of an 80% hike in the energy price cap from 1st October, crowds gathered outside the offices of energy regulator Ofgem to protest and declare their intention to undertake a payment strike.
With skyrocketing rents, packed out viewings, bidding wars and more, renting in London has never been harder.
Cindy Campbell recounts how her brother ushered in a new era of musical culture at a party she held in the Bronx in ‘70s.
Ahead of the release of their first collaborative album, the producer and rapper talk psychedelics and the state of UK hip hop.