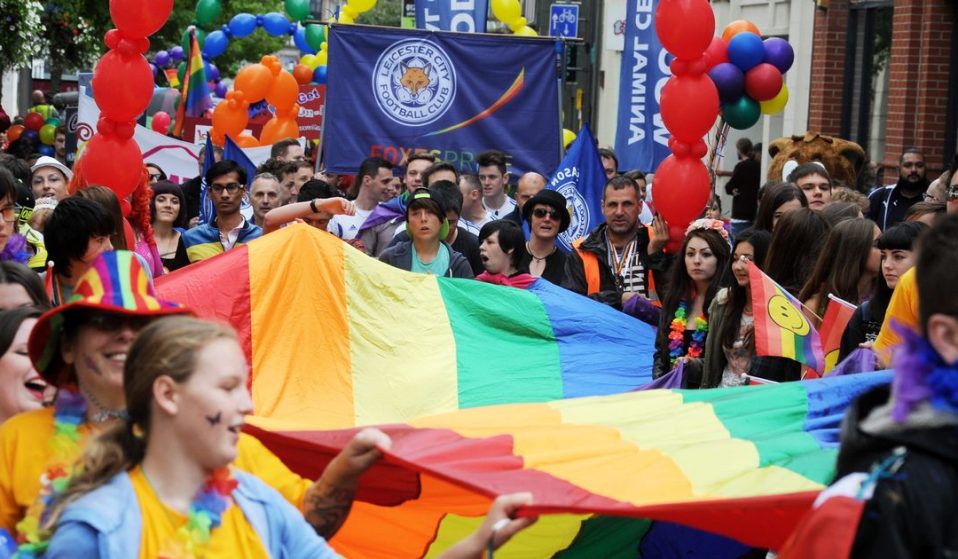 The overlooked story of Leicester’s inaugural Pride march is a reminder of the power of collective resistance in the face of far-right bigotry.

From Michael Jackson superfans to far-right organising, the overlooked story of Leicester’s inaugural Pride march is a reminder of the power of collective resistance in the face of bigotry.

Contrary to what’s commonly reported, the first Leicester pride did not take place in 2001. I should know; I was one of those who helped organise its inaugural march in Spring 2000. It’s a story that careens through the politics of the time – from far-right organising to Michael Jackson superfans and left-wing sectarianism, and it’s an account which has remained largely untold.

The story begins in the ’90s with the National Front (NF). Entering the new millennium, the group’s overt and unashamed racism of the 20th century was gaining less traction among the general public. For this reason, Leicester’s local NF branch was trying to rebrand themselves as ‘anti-paedophiles’, which they conflated with being anti-gay.

In 1999, the NF marched through Nottingham in a protest organised in the name of supposed ‘child safety’. The highly-organised nationalists marched through the city beating drums, surrounded by police who facilitated their demonstration. A group of anti-fascists, myself among them, challenged them. As we faced them down that day we realised we were much less organised: our counter-demo consisted mainly of different left organisations, picnickers who found themselves in the middle of it all and a couple of family dogs. On the car home counter-demo, we decided to establish a network to oppose them.

The disingenuous child safety rhetoric from the right foreshadowed the treatment of trans and non-binary folk today as it had in Rotherham towards the Muslim community. Child safety is a failsafe vehicle for mobilising fear. The right gains attention by shouting ‘the kids are on fire’, twisting insecurity with myth, stereotypes, and basic nonsense to stoke conflict in our communities. Back in the ‘90’s they used this tactic to attack Leicester’s gay community.

In the late ‘90s, the gay scene in Leicester was comprised of three or four bars including The Dover Castle (thought to be the UK’s oldest gay pub), one nightclub, and a community centre. The bar owners collaborated on a plan to host a ‘mardi gras’ event in Leicester in 1999 and the community were jubilant.

But this excitement didn’t last long. Letters had started to appear in the Leicester Mercury from concerned residents’ supposedly wanting to protect the city’s family values. The event was eventually cancelled.

In March 2000, another event was proposed. Much like the previous year’s failed Mardi Gras, the event began to receive some opposition. A small number of people who objected to the event formed a group called The Silent Majority. At the centre of this merry band of bigots was Denise Pfeiffer.

Pfeiffer had a colourful history, to say the least. In 1994, Pfeiffer, age 24 at the time, left Leicester to follow her dream – a dream which involved Michael Jackson. Pfeiffer had been a Michael Jackson fan since childhood and when Jordy Chandler alleged abuse at the hands of Jackson, Pfeiffer – quite literally – flew to her hero’s defence. Pfeiffer harassed the Chandler family and ended up being arrested and detained in prison in Los Angeles. Bail was set at $10,000 and was promptly paid by fellow Jackson devotee, Lynn Redgrave.

Sometime between 1994 and 1999, Pfeiffer returned to the UK, and celibately hooked up with Clive Potter, parliamentary candidate for British National Party (BNP) and The Christian Council of Britain (also BNP).

Fast forward to 2000, and the Silent Majority, spearheaded by Pfeiffer, petitioned the City Council to have our Pride event cancelled over spurious concerns about ‘child safety’ and wrote angry letters to the Leicester Mercury. The bar owners who were backing it took the opportunity to cancel. But the growing number of Unity Against Prejudice members, a group set up the previous year,  were not prepared to hand a victory to the far right.

So, in March 2000, I went with my girlfriend, Lynn, to Leicester’s Secular hall to chair a meeting of 100 people who’d decided to do something about the cancellation of Pride. We agreed to organise an event that would be anti-fascist and unashamedly gay. The next couple of months was planning, meeting, building, flyposting and banner making for Unity Against Prejudice. We had a problem sticking to the focus – the local Socialist Workers Party branch kept trying to submerge the event into an “anti-fascist festival for everyone”. But the community under threat – myself among them – knew what we wanted: a rainbow Pride that was under our control, with others welcome to help.

On 29th July 2000, 500 of us assembled outside Leicester’s LGBTQ+ centre, filled with adrenaline, carrying our helium-filled pink balloons, and moving on the spot to the sound of the Samba Band. Unity Against Prejudice led the march with our banner. The Silent Majority claimed they were planning a ‘peaceful vigil’ against the parade – although the NF member arrested with a chair leg in his jacket didn’t appear to have got that memo. 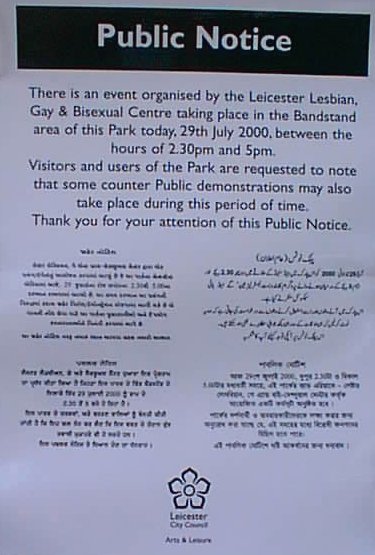 Public notice about the event

Our placards demanded the repeal of Section 28, the Thatcher-era law that forbade the promotion of homosexuality as a “valid lifestyle”. We also demanded an equal age of consent which remained unequal despite being three years into a Labour government. We had negotiated the route with the council and won the right to reclaim the city, not having to sneak through back streets as the council and police had hoped we might.

At Churchgate, the SWP attempted to split the march. The Nazi counter-demo just metres up the road were shouting ‘paedos’ at us. Determined for our parade to happen, we ignored them. Stewards expertly held the demo in one piece, past The Silent Majority – who, unsurprisingly, was not silent – then onto Abbey Park where we inhaled deep victorious breaths. That was what we had come to do. We had set the terms of our victory and surpassed them. We had all made it to the park, together. That was the point of it. An anti-fascist grassroots pride.

Today, the social and political gains made by the LGBTQ+ community in the late ’90’s and early noughties are fragile. Political parties attack or skirt around trans rights. Reforms to the Gender Recognition act –  which would allow transgender people to self-identify without the need for a medical diagnosis, streamline the administrative process, and allow non-binary identities to be legally recognised – were put on the backburner in 2020. An increasing culture war against trans people is being stoked by many in the media and parliament threatens to throw us back to those dark days.

If Leicester Pride taught me anything, it’s about the need to come together and counter these threats. About how powerful we are when we do so, and about how we can win. Thinking back to the end of that first Pride I remember sitting down, eating and drinking together as a collective. I felt pride in what we’d achieved and pride in the city we’d come out to make safer for ourselves.

Linkedin
RELATED ARTICLES
OTHER ARTICLES
Yesterday, rail workers came together to protest poor pay, working conditions and job cuts in their latest round of strikes.
A series of photos by the late Jerry Dantzic taken in 1957 show a tender side to the iconic Jazz musician.
Photojournalist Fiora Garenzi spoke with people still living in Eastern Ukraine, an area which seen some of the heaviest fighting since the war began.
From the chip shops, to the bingo parlors and burlesque dancers, photographer Mike Coles remembers capturing scenes of holidaymakers by the English coast.
The government’s brutal crackdown on NGOs has left victims of rape without anywhere to seek help. And now, as the country plays a key role is Russia’s war, things are only getting worse.
Last week, Tower Hamlets council removed its nudity-restricting licensing conditions in a huge win for London’s kink community.