News & Politics / Activism / The world is ending – how will life look when it does? 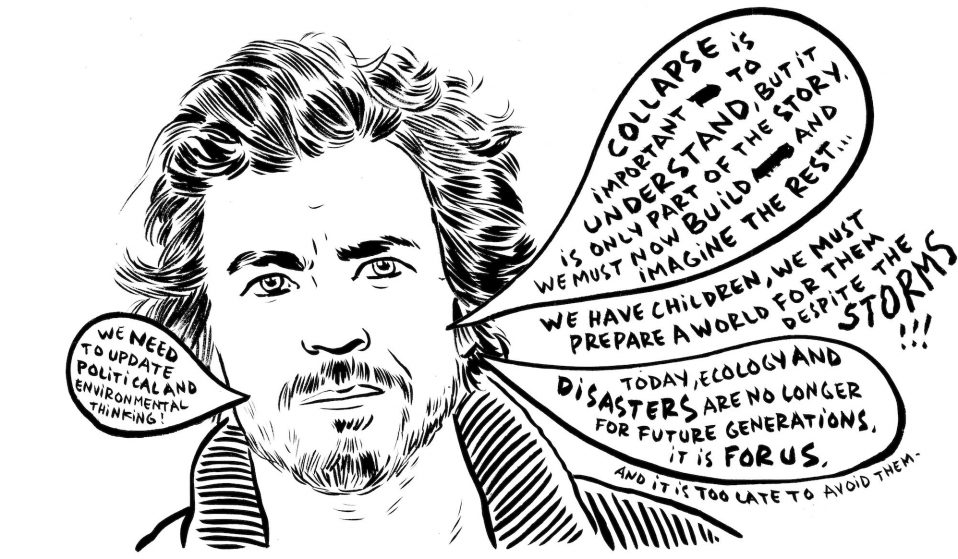 Collapsologist Pablo Servigne warns of a return to a world quickly becoming 'unliveable for humans and most life'.

As lockdown eases and people go back to 'normal', environmentalist and collapsologist Pablo Servigne warns of a return to a world quickly becoming 'unliveable for humans and most life'.

Researcher and author Pablo Servigne is a leading expert in collapsology, a field that focuses on the possible downfall of human civilisation. According to collapsologists, unless we mend our ways, a future collapse is all but inevitable. But instead of sticking to doomsday rhetoric and giving in to fatalism, Pablo also points to how we can organise to deal with the many changes coming our way. In his most recent book, Another End of the World is Possible: Living the Collapse (and Not Merely Surviving It), Pablo examines the psychological impact of such changes, and the inner journey required to cope with the stormy years ahead. Huck caught up with the French thinker to get his reflections on the dangers, and the possibilities, of a post-COVID-19 world.

Let’s kick off with Covid-19. Can you tell us how you think this crisis highlights the flaws in the system? How do we learn from it?

The risks of a pandemic were known to scientists, but many governments ignored the alerts – and much of the public did not really want to hear about them, either. This reveals something important: a denial of disasters and the refusal to spend on essential services. Secondly, this pandemic has many causes, including the destruction of ecosystems and our relationship to wild animals and livestock. Finally, it revealed the vulnerability of our globalised economic system, which is too strongly interconnected with a homogeneous system of rapid flows of information, goods, people, etc. We are all too dependent on one another.

The pandemic is not just a health crisis, and it has many systemic consequences: economic, financial, social, political, ecological, etc. To reduce the risks in the future, we must review everything: our relationship to the world, to animals, to speed, to globalisation, etc. And of course, we need to move towards more autonomy – at the local level, but also globally. Resilience specialists know that there is also a need for inventory, efficiency, sobriety and compartmentalisation in subsystems. In short, we must be inspired by the principles of life, which permaculturists do.

Faced with fear and potential chaos, what did you make of how authorities and populations reacted to the crisis?

I found people overall to be quite docile, despite the high level of distrust in the authorities. The fear of viruses and diseases, which is something atavistic, has played a big role in how people reacted: many were happy to go into quarantine. It was also interesting to see the reaction of governments, who stopped a world which they said could not be stopped. They must have been very scared. Even though we are already witnessing a great psychiatric wave caused by this brutal lockdown, I am personally convinced that many people have experienced this lockdown well and were not afraid. But we will have to wait for the work of sociologists to find out. As for the authorities, in France, they were ill-prepared and suffered from a high level of distrust from the population, which led them to impose measures worthy of the Middle Ages. This, of course, carries risks for freedoms and democracy.

Your book How Everything Can Collapse has just been published in English, and Another End of the World is Possible will be published soon. What are you trying to achieve with them?

I come from the scientific world, and for a decade, with Raphael Stevens and Gauthier Chapelle, we’ve been trying to synthesise what many scientists say about possible tipping points of our world and the biosphere. Their message is clear: some systems are already collapsing (climate, ecosystems, etc.), and we risk wider systemic collapses in the coming years. In other words, our world will radically change during our lifetime and if we do nothing it will become unlivable for humans and for the vast majority of species on Earth. That was How Everything Can Collapse it was a book taking stock of these studies.

But when you find out all the ways in which the world is collapsing, another question becomes important: how do we live with these disasters and these uncertain futures? This is the ‘inner’ question: psychological, artistic, spiritual, philosophical, etc. How not to collapse before the collapse [laughs]. That was the subject of the second book, Another End of the World is Possible.

And what do we do next to prevent things from getting worse?

Well, this leads us to another key question: how do you organise? This is what we’re working on at the moment. Young people who are now entering the world come directly into contact with this idea of the ‘end of the world’. Previous generations like mine and our parents’ need to know that the situation has changed, ecology and disasters are no longer for future generations. It is for us, and it is already too late to avoid them. We need to update political and environmental thinking. This is why there is a big intergenerational break, and why the young people of today are so upset and at the same time so wise.

It’s not all youth, of course – it’s still a broad base. They act like wartime and seem much more adult than most adults. It’s not just a French-speaking question linked to collapsology, either. Certainly, we have the word, which has facilitated public debate, and which has just entered the dictionary, but an international survey in five countries, including the UK and the US, has shown that two-thirds of the population think they will live an end of the world and that about 10% in the UK think that it will be before 2030. It is quite a mainstream thought.

You are also the co-editor-in-chief of Yggdrasil Magazine. How did the idea of making a publication come about?

The idea of Yggdrasil is to make the first magazine about the end of the world but with a positive angle: how to build resilience, how to imagine the aftermath, how to create new mourning rituals, how to move forward, how to find joy in this whirlwind of storms, etc. Because the storms will last for decades and centuries, and we will have to get used to them. We have children. We must prepare a world for them despite the storms. We also wanted to show that this story of the collapse is widely shared. It is a large, very diverse and colourful movement, which involves the head, the heart, and the body. If any of the three ingredients are missing, it’s gone. Collapse is important to understand, but it’s only part of the story. We must now build and imagine the rest.

You said in Liberation that “we will have to acquire new institutional tools that favour forms of spontaneous mutual assistance rather than the competitive spirit that characterises them today, like our economic system”. Can you explain what you mean?

Mutual aid, solidarity, and cooperation are crucial to building something better. We must immediately stop with this unhealthy ideology of competition and the so-called ‘survival of the strongest’. We have shown in another book Mutual Aid, the Other Law of the Jungle, how this ideology is toxic to individuals and peoples, and how mutual aid is a key human principle. We humans are very good at caring, but it is also a fragile skill and needs to be crafted by appropriate institutions. Please note that mutual aid does not simply mean care or assistantship. Mutual aid is horizontal. It’s a tool for self-organisation. It’s a means of cultivating the autonomy of small groups (families, villages, etc.) and large groups (regions, countries, etc.) so that they no longer depend on superior structures which dominate or exploit them. For example, setting up short circuits and collective vegetable gardens throughout your neighbourhood decreases your dependence on industrial and commercial structures that have become toxic to the Earth and to yourself. You have to break free before fighting them. It’s a big disconnect. And it requires, as Rob Hopkins says, a great re-skilling.

What are you up to next? Any advice for the rest of us?

I’m working on two projects. The first one is writing stories, both fiction and non-fiction, which can hopefully inspire people. And the second one is political organisation. We have the data and the findings, and we have drawn tracks on how to live those coming storms internally (and not only survive them). Now we must draw horizons, agree on moral values and strategies, and make an alliance to be able to influence our destiny and stop this crazy destruction. This requires a radical reduction of inequalities. It is the essential condition for taking care of the common good, and for maintaining social cohesion. Otherwise, there’s a huge risk of degenerating into social and political chaos, what historians of the future will call a ‘collapse’.

Linkedin
RELATED ARTICLES
OTHER ARTICLES
Last week, Tower Hamlets council removed its nudity-restricting licensing conditions in a huge win for London’s kink community.
Photographer Bud Glick recounts documenting everyday life in the area, and what it taught him about the Chinese immigrant experience.
The government’s brutal crackdown on NGOs has left victims of rape without anywhere to seek help. And now, as the country plays a key role is Russia’s war, things are only getting worse.
Following the release of his latest album, the rapper talks about finding a new approach to songwriting, attitudes to poverty, and why his music is more than a political statement.
With the UK now set to run out of vaccines, people working in the sex industry – particularly outside of major cities – have been left especially vulnerable, reports Brit Dawson.
As the Criminal Bar Association enters its fifth week of action, criminal barrister Russel Fraser explains why the legal professionals have walked out and how action is likely to escalate.