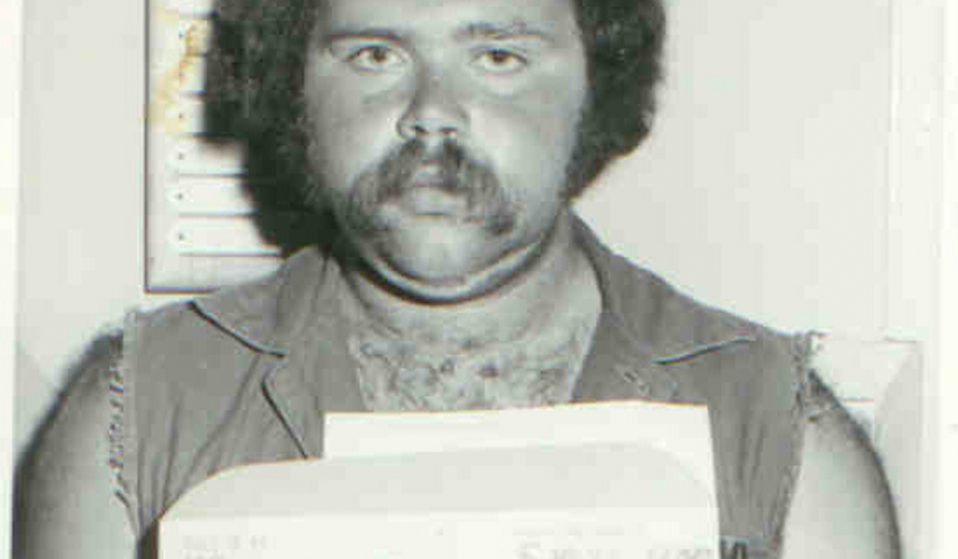 From anti-abortion protestors to Andy Warhol: legendary activist Aron Kay looks back on a lifetime of political pie-throwing.

From anti-abortion protestors to Andy Warhol: legendary activist Aron Kay looks back on a lifetime of political pie-throwing.

Throughout the ’70s and ’80s, with the sounds of the rebellion still ringing in America’s ears, Aron Kay railed against the establishment using a variety of creamy desserts.

Over his 20 year career of throwing baked pies at unlikable public figures, Kay became a lovable antihero of the radical left. Even middle America got a taste of his antics, thanks to his paparazzied public displays. However, not everyone enjoyed his schtick – he also earned himself a chunky 120-page FBI file for his so-called “Revolutionary Activities.”

The “Yippie Pie Man” cut his teeth with the Youth International Party, a left-wing activist group that had spun out of the ’60s anti-war movements. Among his ranks were famous counterculture icons such as Abbie Hoffman, Jerry Rubin, and Tom Forcade, the founder of cannabis culture magazine High Times. They were smart, fierce, stoned, and – most importantly – they were funny.

While many members of the Youth International Party (or “The Yippies”) dabbled with using confectionery as a tool of political irreverence, Aron was the crème de la crème of pie throwers. His impressive hit list included dozens of big names of the conservative establishment, corrupt politicians, and many public figures that dared to take themselves too seriously.

Now approaching his ’70s, the “pied sniper of New York” hasn’t touched a pie for a few decades, but he’s still feisty, still protesting, and still smoking. We talk to him to about the history of his craft, whether pie-throwing is a lost art, and how to protest in the age of Trump. 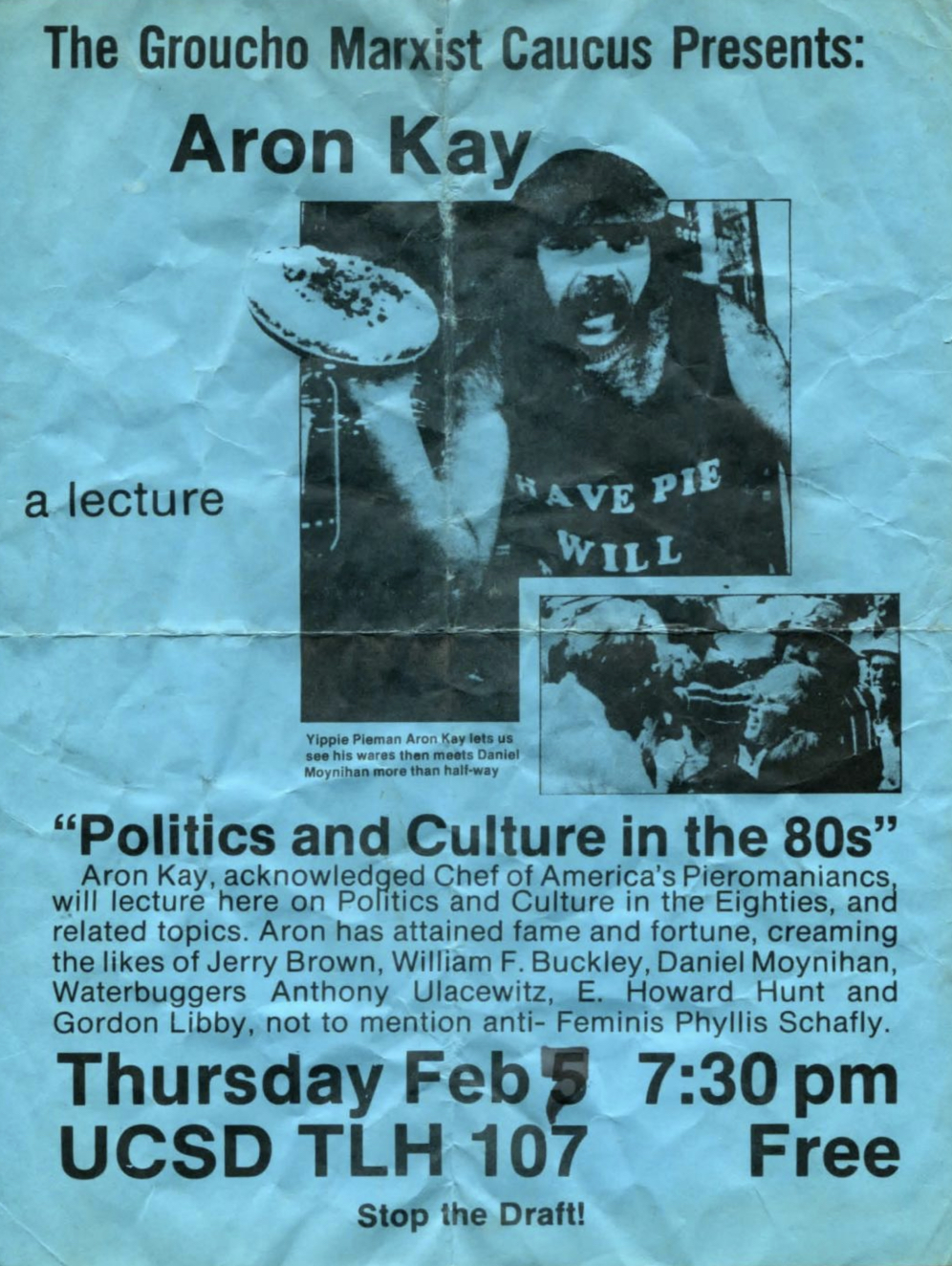 How did you get involved with the countercultural activism?
When I was 14, in 1964, my family moved to LA.  It was the time of the Civil Rights Movement and the anti-war movements. My first protest was in November ’66, two days before I turned 17, at the Sunset Strip riots – it was a protest against a curfew on the strip. All hell broke loose that night. The whole scene started to spread to other parts of the city. Head shops opened up, radical bookstores opened up, people had concerts in the park, there were love-ins and be-ins. I started to get involved with organising the Griffith Park loves-ins. There was music, people gathering, tripping, bongo players. I was exposed to a lot of interesting stuff.

Why did you start throwing pies at people?
I was always a follower of the Marx Brothers and the Three Stooges. Then, in 1971, Thomas Forcade of High Times magazine pied a commissioner. Then a year or so later, Pat Small pied a councilman in Miami Beach. I took up the idea from all of them.

Who was the first person you pied?
My first pie was in 1973, and it was Renny Davies, the anti-Vietnam War protester. He had started following Guru Maharaj (a Nigerian spiritual master) and was hypnotised by him. Abbie Hoffman was in the audience, Gerry Rubin was there. All hell broke loose. It was a cherry pie  – get it? It was my pie virginity.

Was it always about politics?
I did get involved with the Agents of Pie-Kill Unlimited. That was a “pie for hire” service. People would contact us and pay 40 or 50 bucks to have somebody pied. It could have been their boss, their landlord, their spouse, somebody’s birthday. I did a wedding, although that one I kind of regret because I don’t want to ruin a happy time.

I did pie a nun once. Two Catholic school girls hired me to pie the nun. She was their principal, they called her “The Bitch.”

Who were some of your favourite pie victims?
I got William F Buckley, the famous right-wing journalist. He didn’t press any charges but it got in every paper in the country the next day. A few months later, I got Senator Pat Moynihan. Then there was Howard Hunt, he was a Watergate guy accused of being involved in the assassination of President Kennedy. He appeared on the Tomorrow Show on NBC that night and he looked pissed. He was pissed.

Around April 1977, I got Phyllis Schlafly, she was an anti-feminist; a woman against women! I said to her: “that’s for the Equal Rights Amendment” and I walked right out of there. To jump over to August, I got Quentin Kopp, he represented big real estate and gentrification. Kopp took it well, actually. He saw it as an honour because it meant he was up there with the other people I got. He had a sense of humour.

My next one gets even better: the mayor of New York, Abraham Beam. That one was on every TV station in New York City because it was being filmed live during a mayoral candidate debate. It was an apple crumb pie because he was a crummy politician in the Big Apple.

A few weeks later, I get arrested, three of us got busted. I had got William Colby, the former CIA director. He got a Bavarian chocolate and blueberry cream cheese pie because he was the big cheese of the CIA. Plus 4 eggs thrown at him, for good measure. We got a fine for that one, I had to pay $150. I shouldn’t have been fined, I could have done with that 150 somewhere else.

Were the pies always personalised?
Oh yes. In 1983, I did Edward Teller, the scientist who was the “Father of the A-Bomb.” It was mushroom and tofu pie – mushroom for all the mushroom clouds, you know?

Why did you pie Andy Warhol at a High Times party?
I did Andy Warhol because he had met with Shah of Iran and, you know, you don’t eat dinner with a dictator. I got him with a cherry pie because “violence is as American as a cherry pie” [a quote from the Black Power activist H. Rap Brown]. Warhol handled it well, but he was a little pissed because I got it on his wig.

Why did you stop throwing pies?
My last one was Randall Terry, the anti-abortion activist from Operation Rescue. I got him just before the Democratic Convention in 1992. No charges were pressed. Other people had been pieing since then, there were other people who followed through on it, but I was a father, I had a kid in school, so I had to protect her integrity too. I had to keep it together for the kids.

How come people aren’t still pieing people like the ’70s and ’80s?
I still have a long list of people who I’d like to see get a pie. Everyone knows someone who needs a pie. Any of the ‘Trumpies’ could use a pie. People who want to fuck with immigrants, people of that sleazy ilk.

I guess it’s not cool to touch the feds, why get penalised? It’s not worth it. But there’s still a movement around. There’s symbolic pieing, like the way some of these creep politicians were confronted in restaurants, it’s akin to pieing because they are confronted and put to shame. Or Therese Okoumou, the woman who recently climbed up the Statue of Liberty to protest the separation of migrant families – I think that’s great!

The spirit is still there, it’s just a different generation.

So, your legacy lives on?
I remember getting a phone call from the Washington Post a few years ago because somebody in London pied Rupert Murdoch. I suspect I inspired those people. I’ve also met Noël Godin, the Belgian guy who pied Bill Gates in the 90s. He ended up pieing me and I pied him. I believe that anyone who pies anybody else has to go through “pie-chotherapy” – they have to also be on the receiving end of it. I can handle it, as long as it tastes it good.

Linkedin
RELATED ARTICLES
OTHER ARTICLES
Following the announcement of an 80% hike in the energy price cap from 1st October, crowds gathered outside the offices of energy regulator Ofgem to protest and declare their intention to undertake a payment strike.
Rogue landlords are exploiting young and inexperienced renters and leaving them in mental and financial turmoil, reports Niall Hignett.
A new project is documenting formerly incarcerated people as they transition back into civilian life.
The two-day long event returned to London this year, showcasing a spectacular parade, steel bands and Caribbean food.
In his 2008 series, the photographer pictured himself as Angela Davis, Martin Luther King Jr., Malcolm X, and other prominent figures.
Birdy Chu reflects on documenting the historic moment in which the territory was formally passed back from the UK to China.