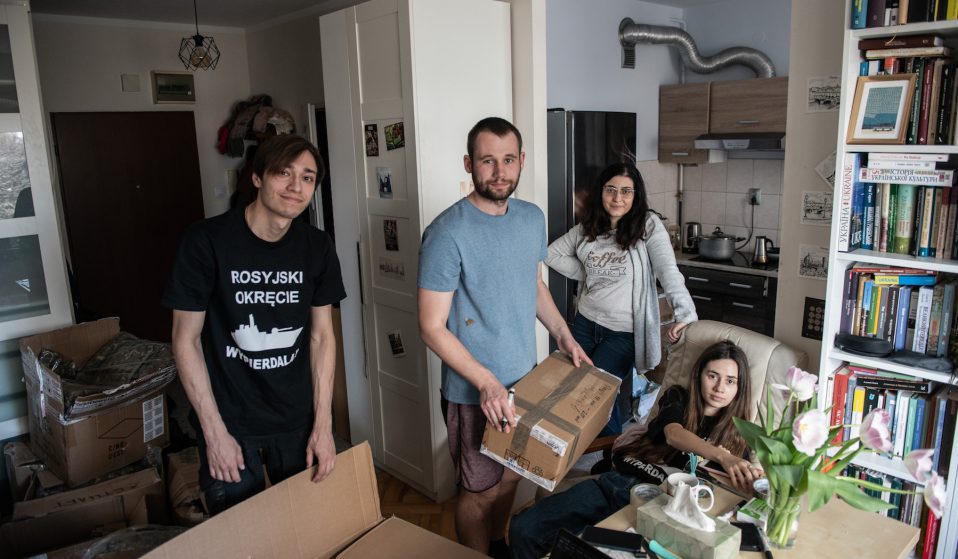 A group of Ukrainians living in Poland are helping Ukraine withstand Russia’s brutal invasion by buying supplies and shipping them directly to the war’s frontlines.

A group of Ukrainians living in Poland are helping Ukraine withstand Russia’s brutal invasion by buying supplies and shipping them directly to the war’s frontlines.

Ela Kwiecinska’s small, one-bedroom apartment in Warsaw is ordinary and unassuming. But over recent months, it has become filled with stacks of boxes full of helmets, bulletproof vests, tourniquets and radios. After Vladimir Putin’s invasion of Ukraine on 24 February, the apartment was transformed into the impromptu warehouse and nerve centre of a logistics operation that has since shipped over a dozen lorry loads and 20 tonnes of supplies to Ukraine.

The unlikely masterminds behind it all are three young Ukrainians: Oleksii Rudenko, a 25-year-old PhD student, Anastasiya Kuchyna, 24, and Hlieb Boiechko, 24. The efforts of the trio, all alumni of Taras Shevchenko University in Kyiv, where they met, as well as their host, Ela, a 32-year-old historian at the University of Warsaw, are one node in the vast volunteer-organised web of aid that has helped Ukraine withstand Russia’s brutal invasion.

On 25 February, the day after Russia invaded Ukraine, Oleksii, Anastasiya, and Hlieb were in Vilnius, Lithuania, packing their bags with an aim to reach Kyiv as fast as possible. “We wanted to fight and defend our country,” says Oleskii, “we couldn’t just stay and watch what Russia was doing to our country, our people”. The two young men left that day and waited for Anastasiya in Warsaw. They planned to cross the Ukrainian border together on 26 February.

On the 25th, before he went to sleep, Oleksii, received a message from a former classmate from Shevchenko University who, together with other alumni, had formed a territorial defence unit – one of the thousands of volunteer militia groups that sprung in the immediate aftermath of the Russian invasion. They needed helmets, vests, gloves and other protective equipment, his friend said, and asked Oleksii if he could help get it for them abroad. 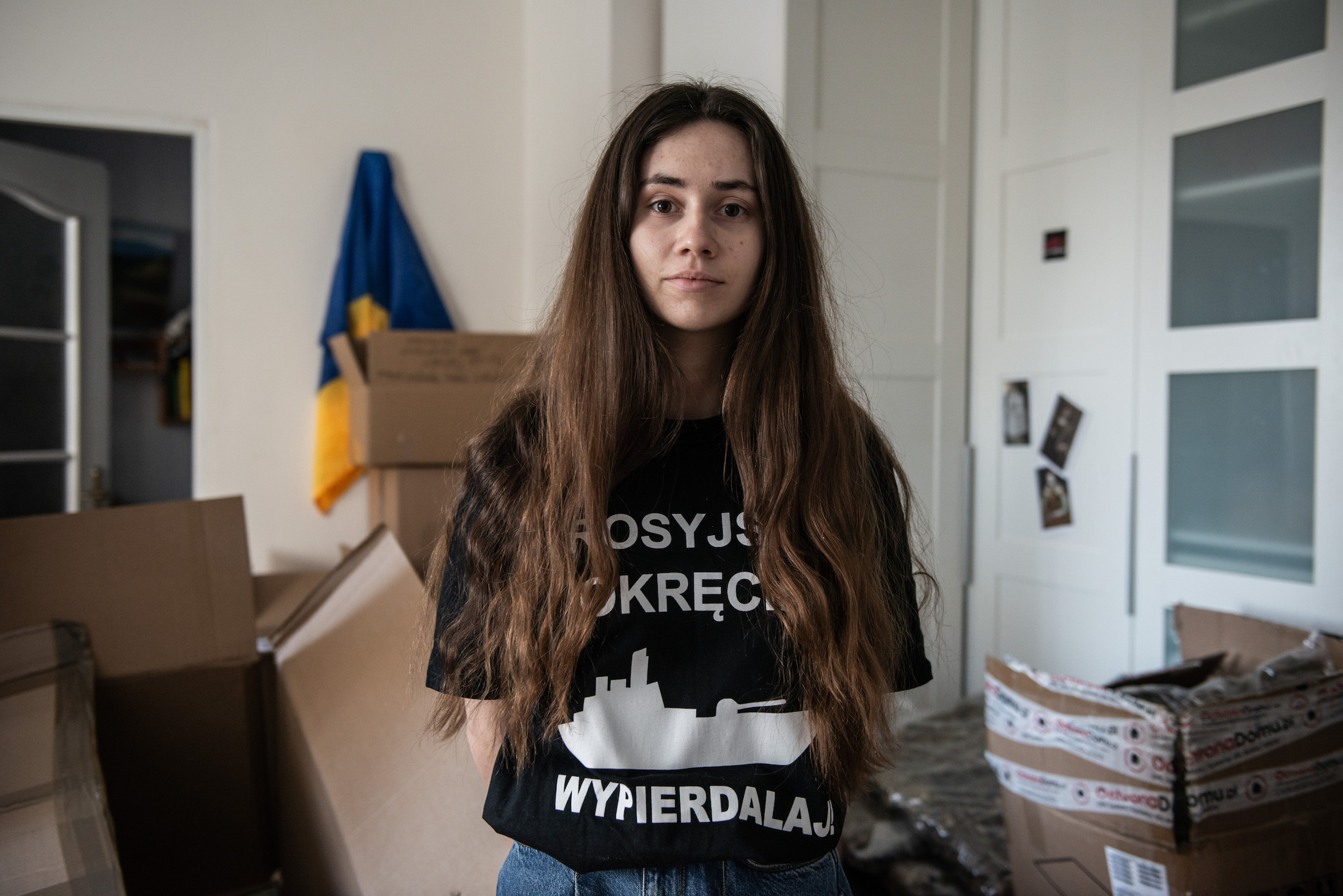 In the immediate aftermath of the invasion, over 100,000 people signed up to join the territorial defence. Though Western aid quickly began to flow into the country to the tunes of millions of dollars – and has, as of late April, totalled nearly 20 billion pounds – it was still not enough to meet the sheer scale of demand.

Trying to procure this kind of equipment can be prohibitively expensive: just a single bulletproof vest costs from several hundred to over one thousand pounds. So, to help purchase the equipment requested by his friend, Oleksii made a post on Facebook asking for donations. Responses poured in almost immediately. “In the post, we wrote that we know these guys personally and wanted to do something to protect their lives,” Oleksii says. “I think people really wanted to be part of this.”

They raised hundreds of dollars within the day and ran out to buy the equipment from local military supplies and army surplus stores in Warsaw. The shipment was sent to Ukraine the next day with a friend who volunteered to make the drive. At that point, Oleksiy, Anastasiya and Hlieb realised they would be of much more use outside the country, and launched the project that they later named “Stand With Ukraine”.

The group’s success in shipping goods to Ukraine quickly made them well-known among certain territorial defence units in Ukraine, and in the first weeks of the war, they mostly worked with friends or acquaintances or relatives in Ukraine, supplying everyone from frontline fighters to medical workers. Later, they began to leverage what Oleksii refers to as the “Facebook army” using social media to source more donors, as well as more people in Ukraine who need their help. With the help of web-developer volunteers, they have even set up a website. 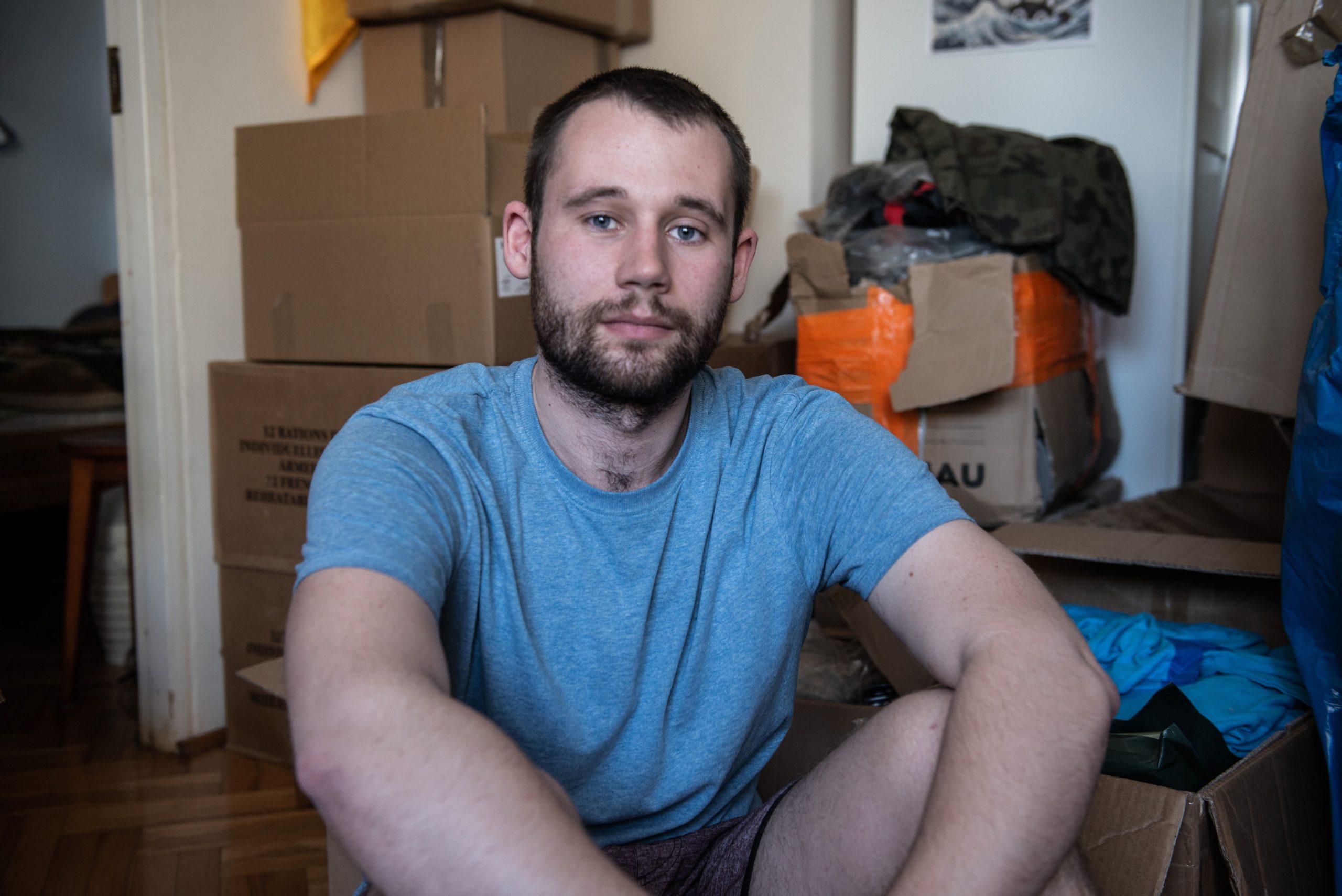 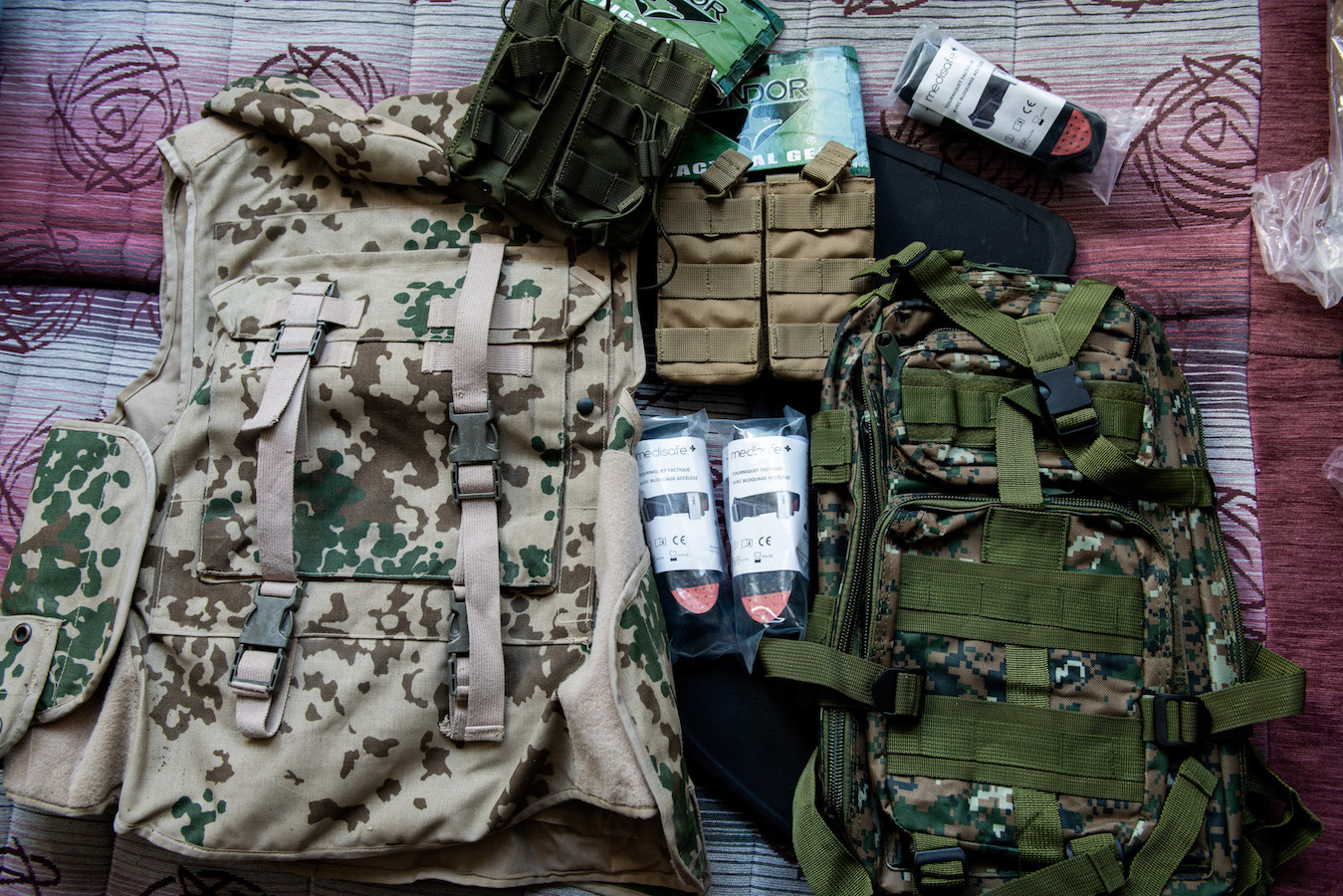 Rarely, Oleksii explains, can they promise to deliver everything that is asked for. Because of the war, many things are in short supply – especially bulletproof vests. Because of shortages, it takes too long to simply cold call businesses that would typically sell such equipment. So instead, Stand With Ukraine make use of their social networks. “Usually [purchases] are done through personal contacts,” he says. “Someone posts on Facebook, saying call this number or that number. They will say, ‘Yeah, I’ve sold everything, so better call this number’, and after several calls, you finally find someone.” Who that ‘someone’ is can range from people in Poland to those in the immediate European neighbourhood such as Czechia or Romania, and those further afield, such as France or even the United States.

Oleksii estimates that the equipment they sent in the first weeks of the war was composed of roughly 50 per cent knapsacks, knee protection, goggles, and gloves. Around 20 per cent of it was walkie-talkies alone, as all the ones in Ukraine have long gone out of stock. The remainder, depending on what request they’re fulfilling, might be helmets or body armour or medical supplies. More recently, as aid has flowed into the country, the contents of their shipments have “slightly changed” and become more “specialised”, Oleksii says, including goods such as high-powered binoculars. Each time they send a shipment, Hlieb estimates they load up about two to three tonnes.

Volunteers driving lorries collect the goods from Stand With Ukraine and similar groups in Warsaw. The drivers are never Ukrainian men, who are forbidden under martial law from leaving Ukraine. The supplies are unloaded in Lviv, a major Ukrainian city near the Polish border where the goods are stored within a government-managed warehouse. Each box the student pack has information that pertains to a given territorial defence unit, which, upon receiving the equipment sends photo evidence back to Stand With Ukraine, who use it as proof to show their donors the good their money has done. 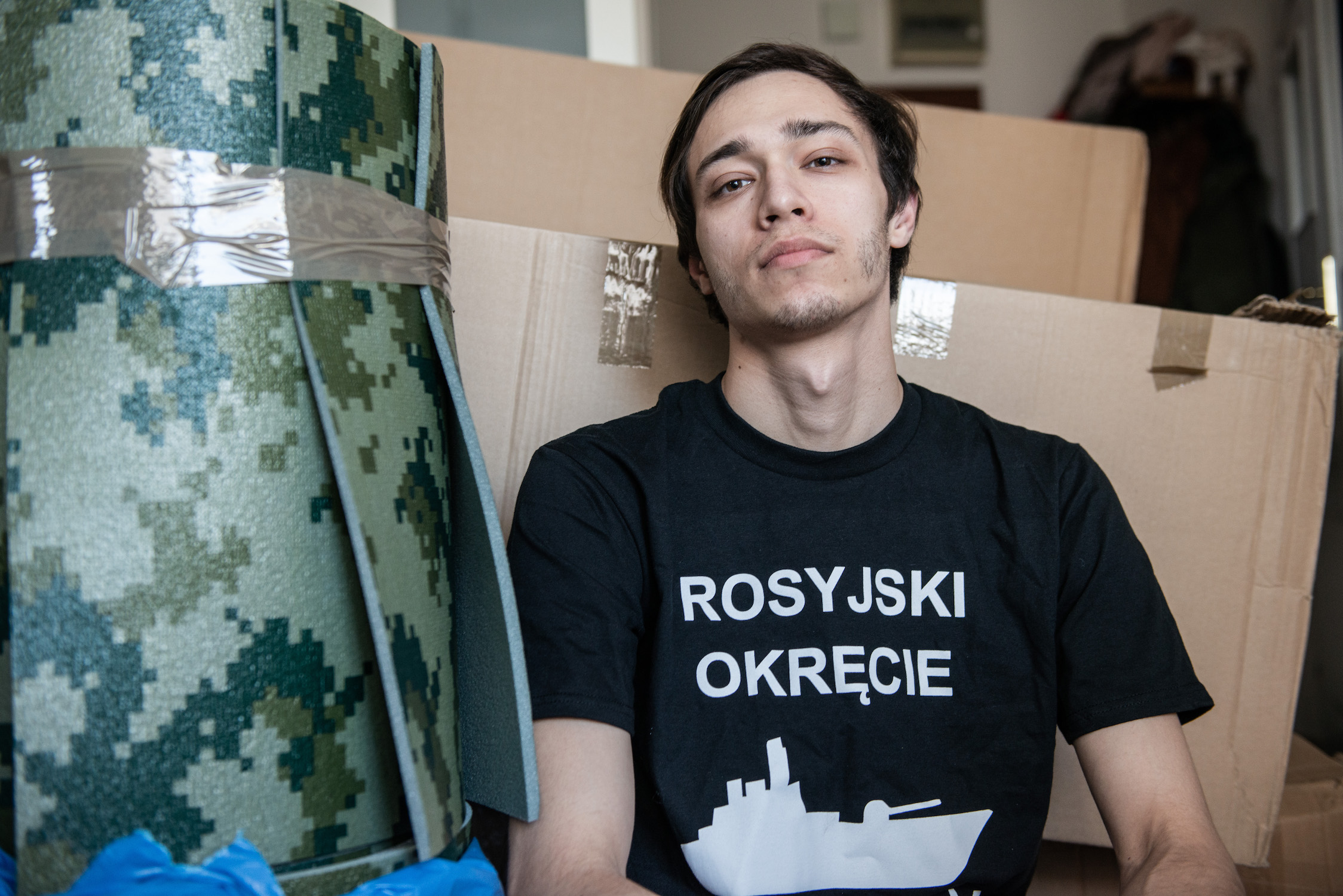 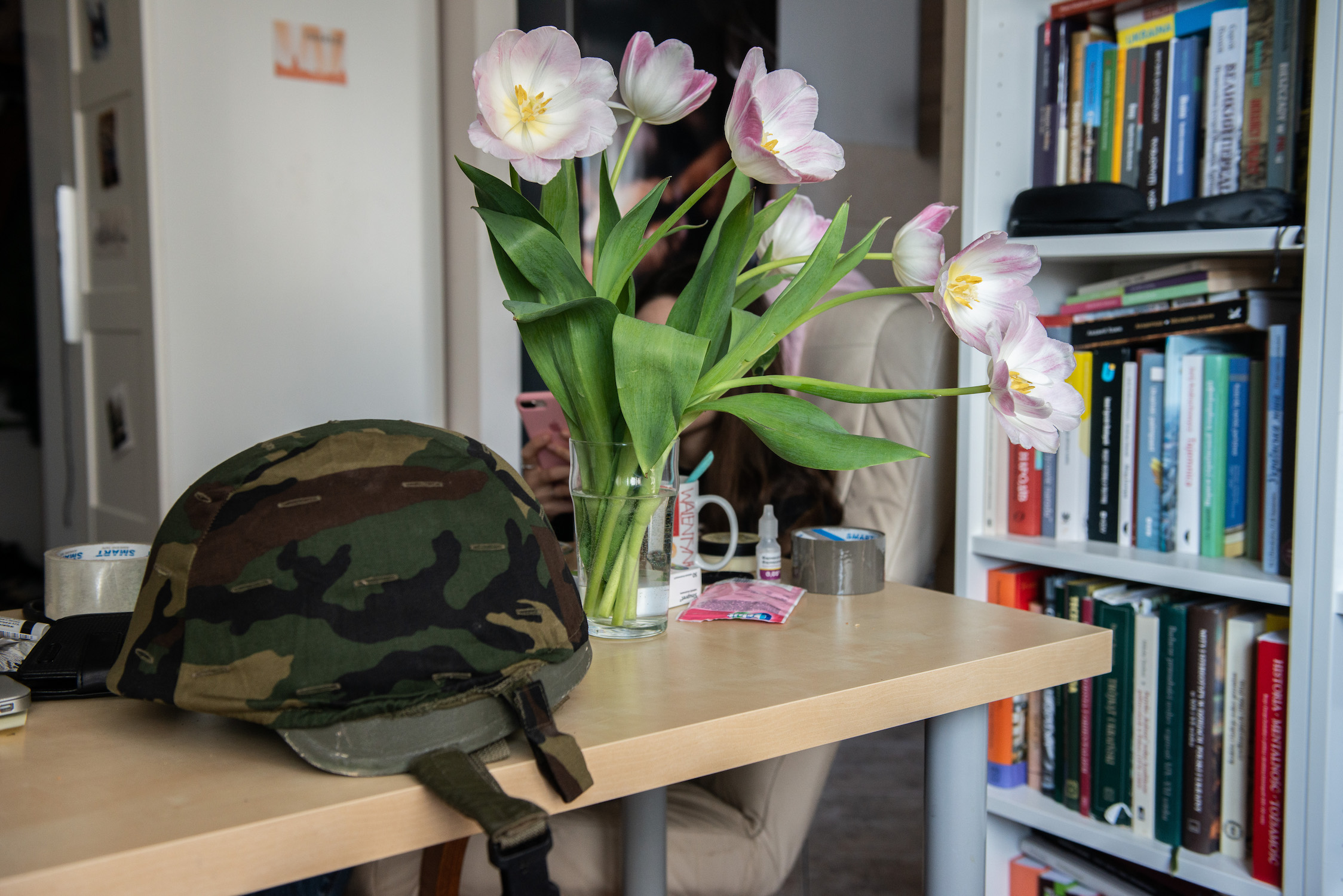 But the process is not without its hiccups. The difficult reality for this homemade logistics operation is that it exists in a regulatory grey zone. “What they are doing is not exactly legal, and what we are doing is not illegal – but it is in-between,” Oleksii says. Importing or purchasing certain kinds of protective equipment – for example, military-grade protective vests and helmets – in Poland is restricted to private businesses who have been granted a government concession for the sale of such materials. Similar laws regulating the export of such goods also exist in neighbouring countries as well.

According to Polish legislation, the punishment for selling military equipment outside of the scope of one’s concession is between one to 10 years in prison and a fine of 200,000 zlotys (£36,562). However, since the beginning of the war, Polish authorities have not been stopping the shipment of donated protective gear into Ukraine, and Stand With Ukraine know that they are far from the only people in Poland shipping protective gear without a concession. In fact, it is openly being shipped across the border.

Naturally, not everything that comes into the hands of Stand With Ukraine is of the highest quality. Nor does it necessarily need to be. “A helmet, even if it looks old, if it is a NATO helmet from 2003 or 2005 or 2007, and is officially expired, it’s still better protection than nothing,” Oleksii says. There are still some limits, however. “Nothing from the Second World War, we’ll leave those to the Russians.” 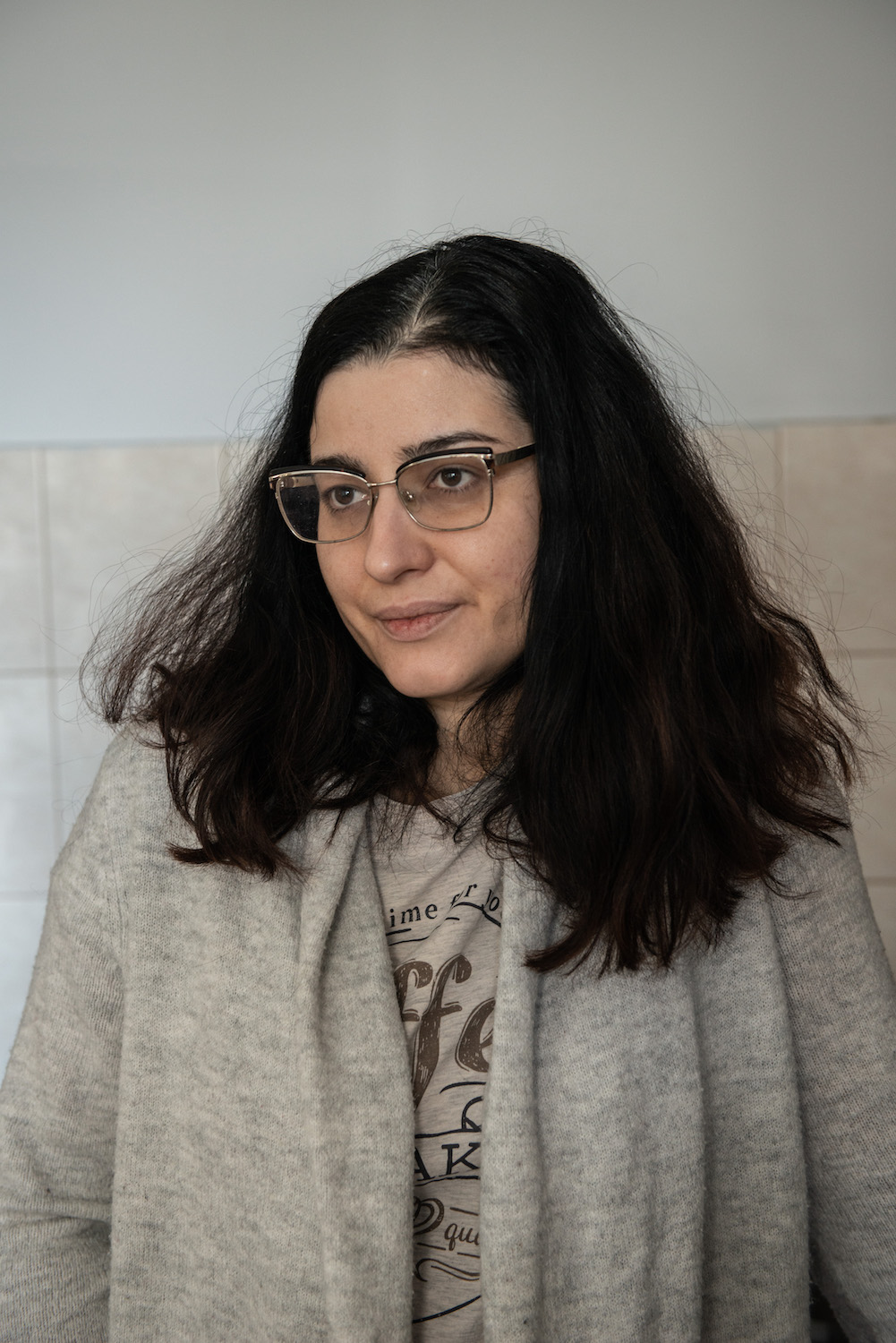 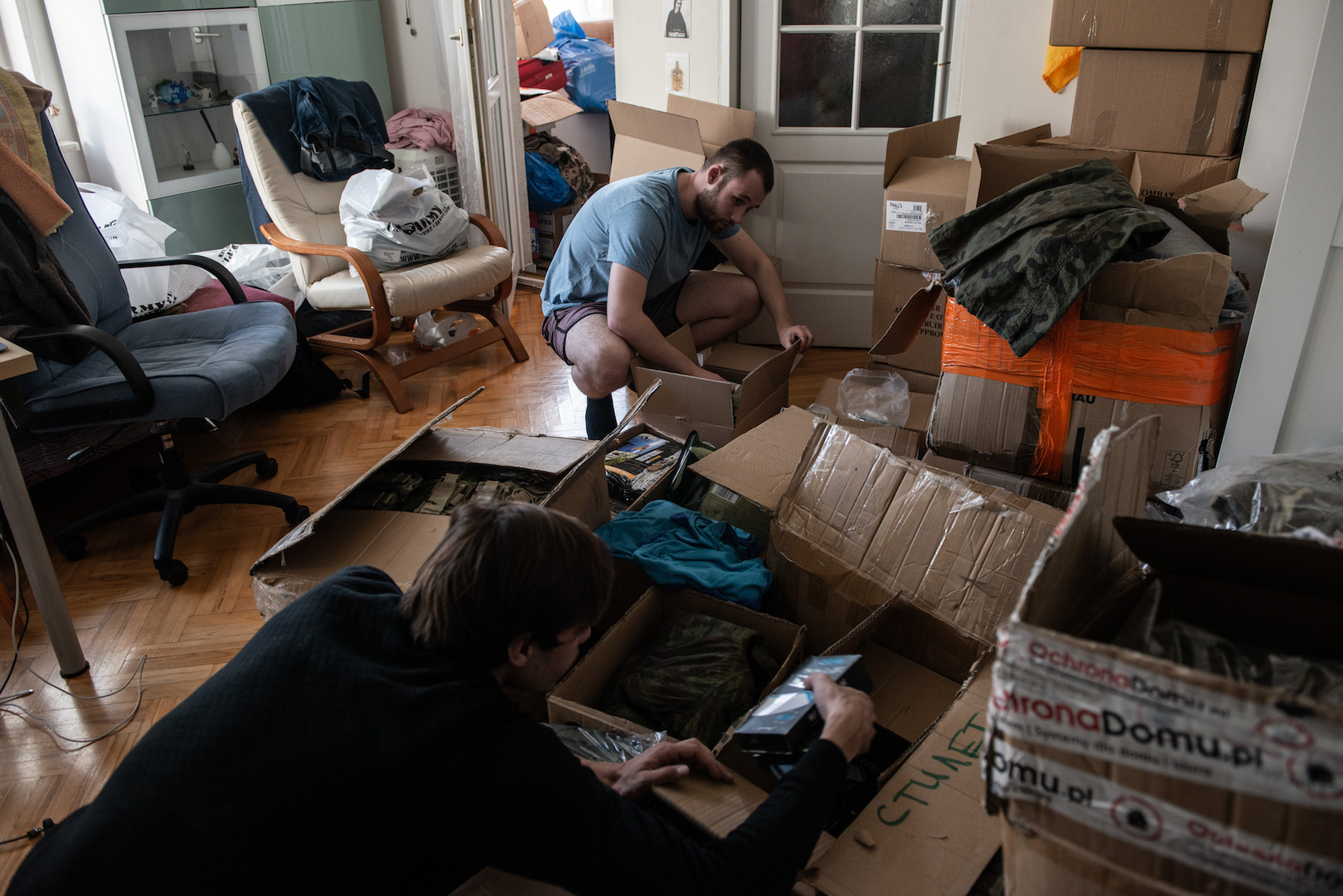 Occasionally, there are problems, even if the gear isn’t over half a century old. “We got some very bad helmets from Italy. They were very small,” Hlieb recalls. “But maybe we just have big heads.”

Due to the occasionally opaque provenance of much of the equipment that comes into their hands, Stand With Ukraine has had to become proficient at quality control. “We look if it’s licensed, or has a special [identifying] mark on it, the name of the steel on it, the thickness of the steel if it’s kevlar or not, when and where it was produced,” Hlieb explains, adding: “We are not experts, we just know more than the average person.”

Despite the emotional impact of the war, and the shock of their sudden transformation from students to near-experts in military goods, Stand With Ukraine has been heartened by the willingness of people to help, sometimes in the most unexpected places. Oleksii puts it best when he says: “Never underestimate the Ukrainians and our allies.” 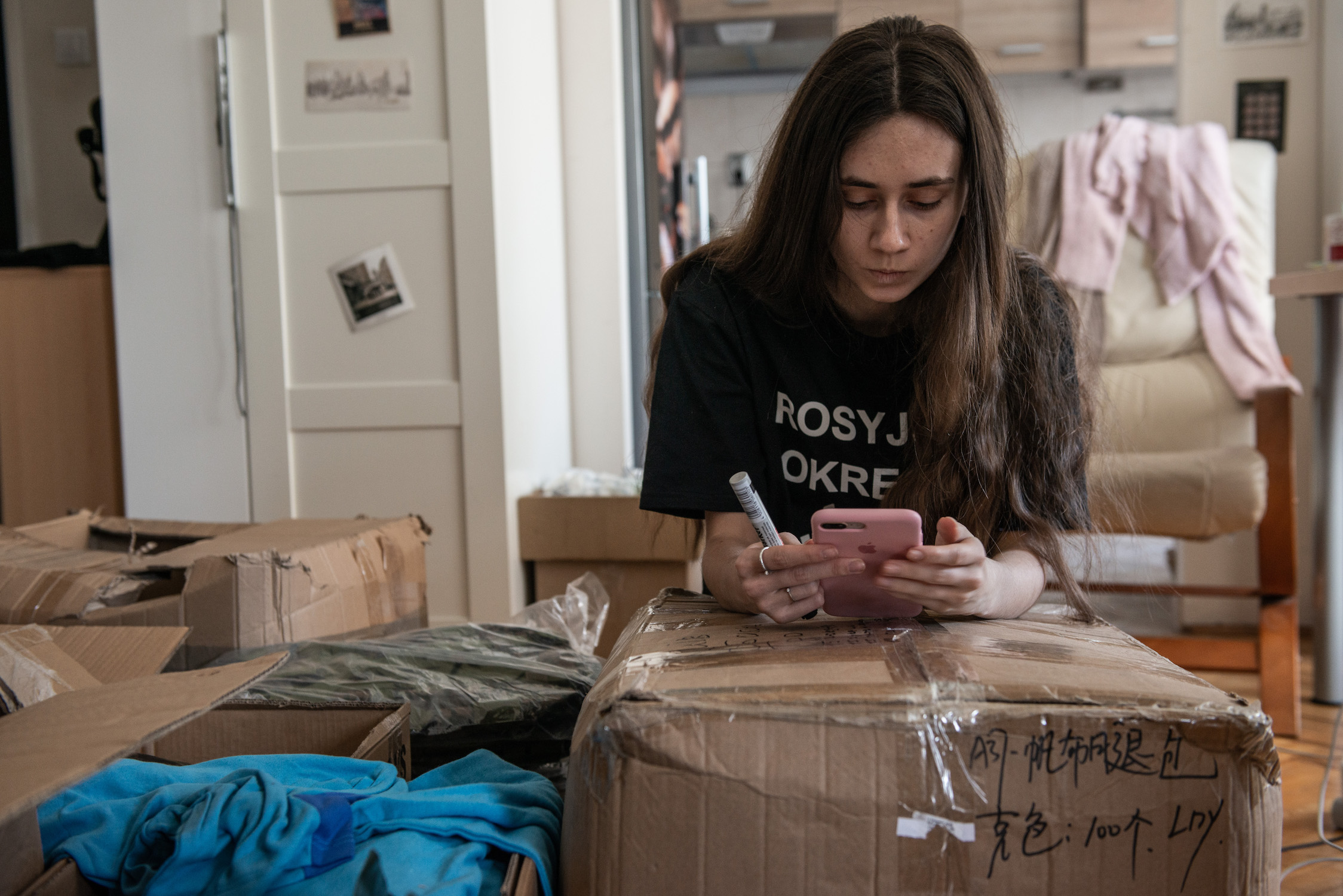 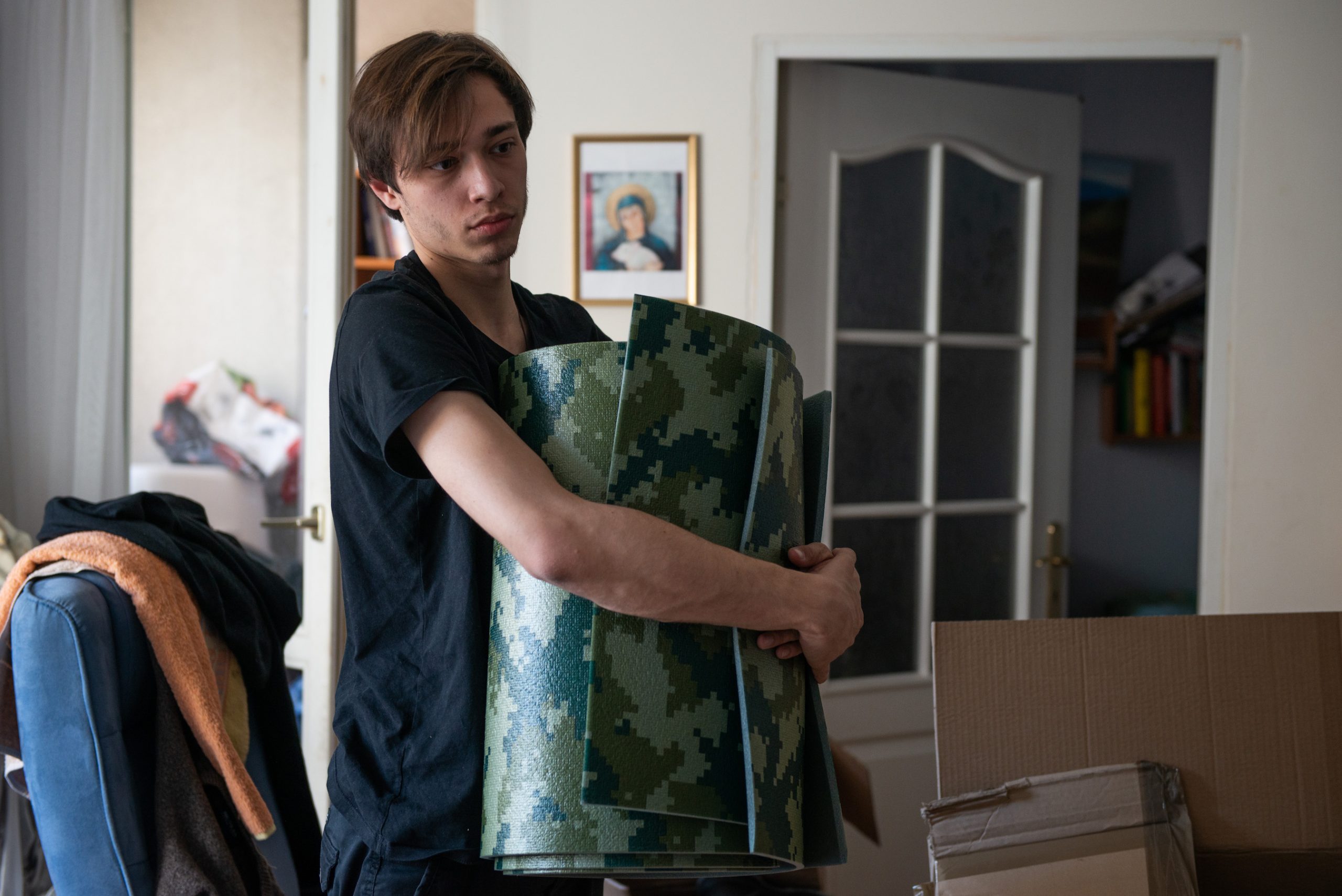 Find out how you can support Stand With Ukraine here.

Linkedin
RELATED ARTICLES
OTHER ARTICLES
The Egyptian government are continuing the repressive mistreatment of environmental campaigners.
A new photo series documents tribes preserving the environment through simple, sustainable practices in central Asia.
Photographer Ira Lapu documents the lives of ordinary Ukrainians living amid a brutal conflict.
With the singer’s tour in full swing, we sat down the musical production company who made the electrifying show possible.
After a devastating fire, creatives in the city are coming together to call for more affordable workspaces.
The hate Just Stop Oil faced after throwing soup over a Van Gough painting has been immense. Here, they explain why it won’t deter them.