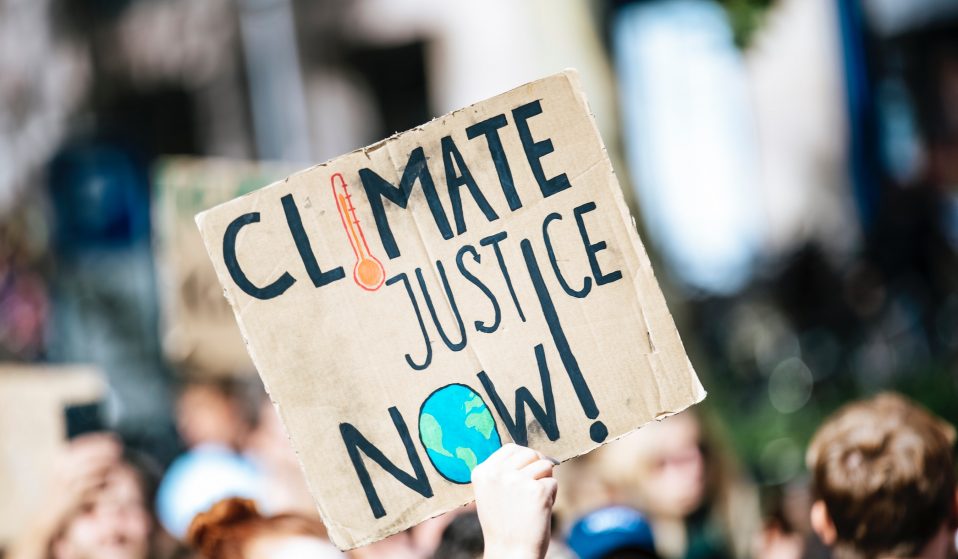 Communities on the frontline of climate chaos are being forced to shoulder the financial burden of a crisis that they did not create.

The communities on the frontline of climate chaos are being forced to shoulder the financial and ecological burden of a crisis that they did not create. Debt repayments must therefore be cancelled, argues Daniel Willis from Global Justice Now.

Alongside discussions about renewable energy, electric vehicles and biodiversity at the COP26 talks this week, a key issue on the table will be finance. At present, rich countries are committed to providing $100 billion a year to the Global South in recognition of the Global North’s major historic role in creating climate change. Although they were meant to reach this target by 2020, these governments gave themselves an extension, but are still only providing $90 billion a year.

Even if they do reach this target soon, governments and movements in the Global South argue that $100 billion is wholly insufficient – particularly when many of the most climate vulnerable countries are stuck in an ongoing debt trap. How these issues of finance and debt are debated and resolved at COP26 are therefore crucial and represent a key political battleground between rich governments and the Global South.

Last year alone, lower income countries spent $372 billion repaying debts to governments and big banks in the Global North. These debt repayments massively outweigh what many countries are able to spend on vital projects and services. For example, at the beginning of the Covid-19 pandemic, 64 countries were spending more on debt repayments than their national healthcare budgets, and recent research shows that low income countries are spending five times more on debt repayments than adapting to climate change. The refusal to cancel these debts – many of which are legacies of colonialism and are considered to be of dubious legitimacy – therefore has huge implications for climate action and will heavily restrict the finances available to support communities vulnerable to extreme weather events.

While debt is therefore worsening the impacts of climate change in many countries, the reverse is also true. In Zambia (the first African country to default on its debt during the Covid-19 pandemic), climate change will cost the country $4.3 billion over a 10-year period, with changes to rainfall alone costing 0.9 per cent of GDP. In 2019, Mozambique took on a $118 million loan from the International Monetary Fund to deal with the consequences of Cyclone Kenneth and Cyclone Idai. Similarly, in the Caribbean, the World Bank has found that “debt crises can be triggered by extreme climatic events and environmental hazards”.

Despite having contributed the least to climate change, many countries in the Global South are therefore locked in a vicious cycle of debt and climate crisis. The communities on the frontline of climate chaos are being forced to shoulder the financial and ecological burden of a crisis that they did not create. This is quite clearly unjust, and in fact for over a decade social movements from the Global South have demanded recognition of this. Not only should outstanding debts be cancelled, they have argued, but the Global North should also pay high reparations to account for the huge climate debt they owe the Global South for creating climate change.

Rich governments and financiers have so far, however, refused to recognise this debt or accept full responsibility for the climate crisis. Until they do, and a programme for comprehensive debt cancellation and climate debt reparations is agreed (estimated at 1.5-6 per cent of GDP each year), climate justice will not be achieved. At COP26, there is therefore a moral duty for climate justice movements in the Global North to amplify and support these southern demands, to make sure that our leaders and politicians understand who really owes who.

Climate finance has been an important topic of negotiation at previous COPs, and will be again at COP26.

The $100 billion target was officially established in Cancun at COP16 as a means of supporting the Global South to mitigate and adapt to climate change, but southern movements are highly critical of both the scale and form of what has been provided. Nearly three quarters of climate finance is currently provided as loans, further worsening the debt crisis of many governments. Furthermore, nowhere near enough goes to supporting the adaptation needs of climate vulnerable countries, particularly among the Least Developed Countries and Small Island Developing States. A completely new deal is needed at COP26 which vastly increases the amount of finance being provided while also addressing these problems.

Finance is also needed to compensate for the catastrophic loss and damage caused by climate change to countries like Mozambique and Zambia. Rich governments have so far refused to agree on a specific way of compensating countries for these kinds of losses, which are set to intensify over the coming decades.

A significantly increased climate finance target (that doesn’t include more loans) for 2030 and beyond, improved funding for adaptation in the most vulnerable countries, and a mechanism for loss and damage could be important victories during the negotiations. Yet full recognition of the Global North’s climate debt remains a distant prospect.

Building the movement for reparations

Climate debt reparations have been a key demand of social movements in the Global South for well over a decade – it’s the movements and political parties in the north that have to catch up. During COP26, a wide range of climate justice organisations (including Global Justice Now, where I work) will be working to amplify the demands of southern movements. With so many groups and voices from the south unable to travel and participate fully in COP26, movements in the Global North have a duty to reject any half measures on climate finance and support calls for climate debt justice for all.

Daniel Willis is a climate justice campaigner at Global Justice Now (GJN). Join GJN at an in-person event on debt cancellation and reparations with Fridays for Future activists from the Global South on 7 November. GJN will also be joining the Climate Justice Bloc at the Global Day of Action on 6 November.

COP26 takes place between 31 October – 12 November 2021. Keep an eye on Huck’s live coverage of COP on our Twitter and Instagram.

Linkedin
RELATED ARTICLES
OTHER ARTICLES
The two-day long event returned to London this year, showcasing a spectacular parade, steel bands and Caribbean food.
Thousands attended the annual event this year to wheelie through the city and call for ‘knives down, bikes up’.
A 37-year-old woman shares how her abortion led her to become a clinic worker, and the abuse she’s received in that role.
The idea that a younger generation is abandoning work has become a popular narrative online, but it doesn’t necessarily reflect reality.
Birdy Chu reflects on documenting the historic moment in which the territory was formally passed back from the UK to China.
With skyrocketing rents, packed out viewings, bidding wars and more, renting in London has never been harder.