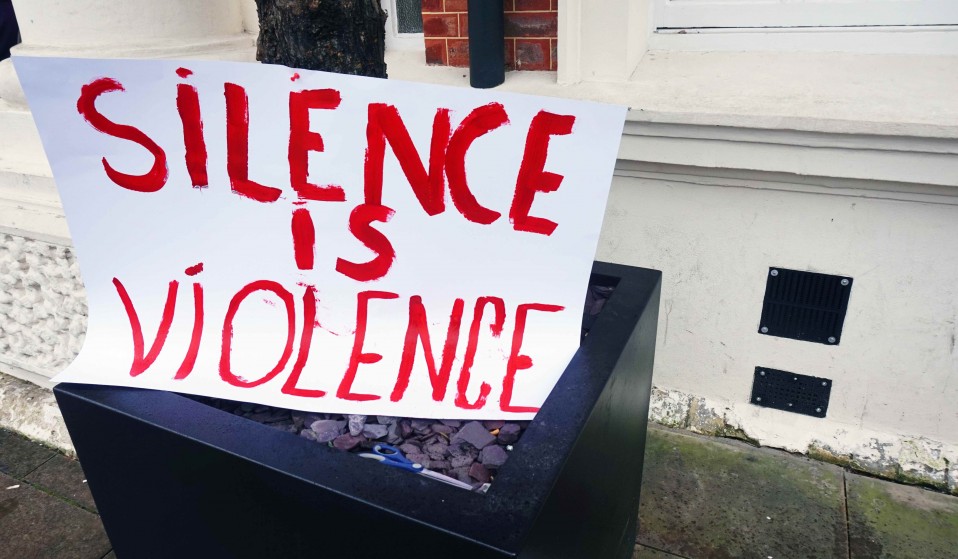 Sexual assault is commonplace on campuses on both sides of the Atlantic, so students at one London university are taking matters into their own hands.

Sexual assault and harassment is commonplace on campuses on both sides of the Atlantic, so students at one London university are taking matters into their own hands.

“This is a public problem, this is a public feeling and we require public healing,” yells an impassioned voice through the cobbled entrance to South East London’s Goldsmiths University, followed by multiple cheers.

Although it’s a cold Monday afternoon, around 50 students from different courses are lined up against the main wall of the college holding placards written in blood-red paint. They’re here to protest the university management’s response to sexual harassment claims. They’re not the first to do so, and unfortunately, they probably won’t be the last.

Right now there’s a sexual harassment crisis ripping through British universities, and while it’s been going on behind the scenes of academia and student life for years, the true extent of the impunity awarded to perpetrators on campuses is now finally coming to light. One in three female students at UK universities will experience sexual assault or abuse while studying; in the United States the figure sits at 1 in 4. 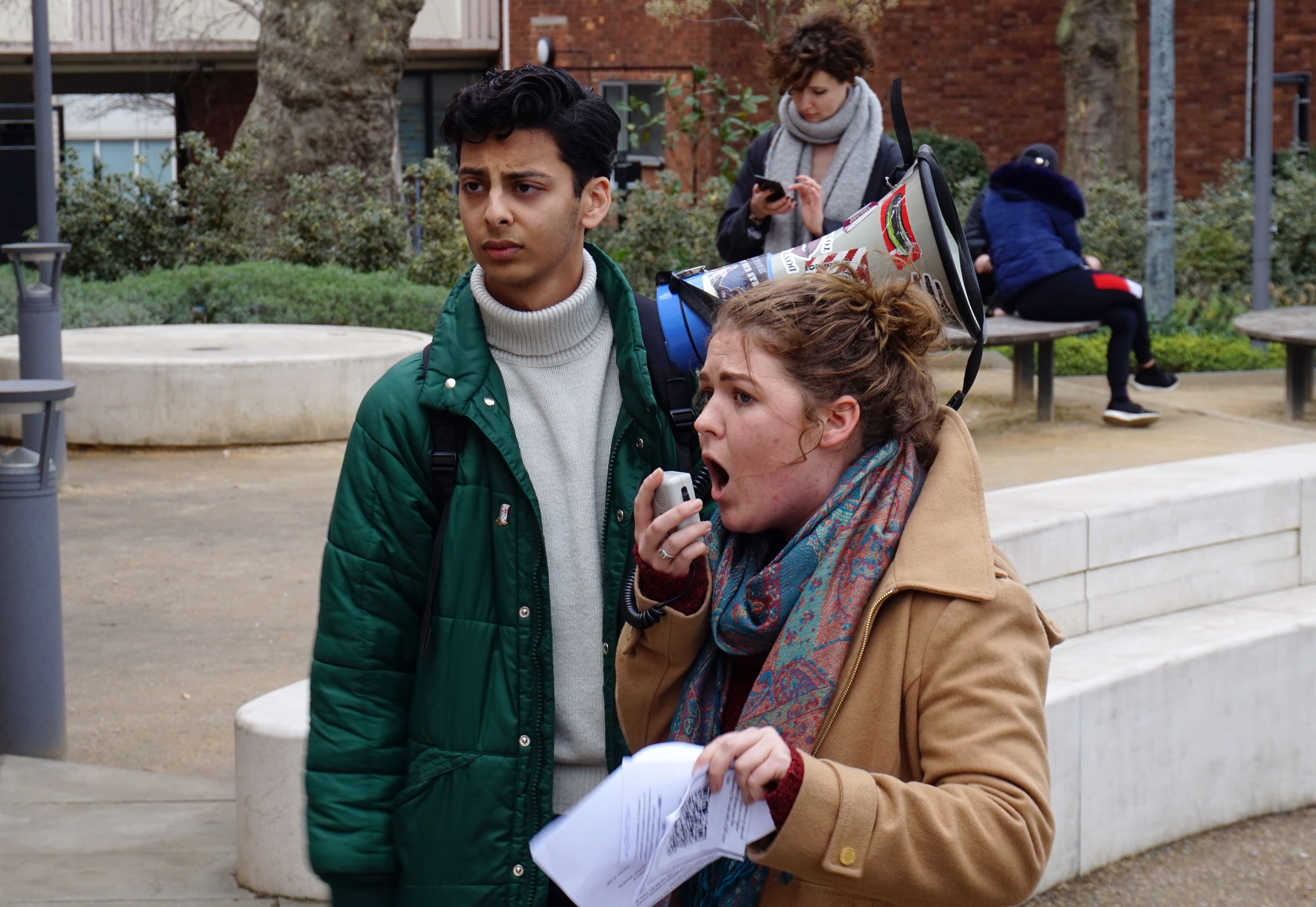 Now new revelations show the issue is even more horrifying than previously thought. In a recent investigation into UK universities, The Guardian reported that over the past 5 years, almost 300 claims of sexual assault have been made against staff at universities, both by other staff members and students. Considering the fact that sexual harassment goes largely unreported, it’s safe to assume this figure, as high as it is, is still far lower than the true numbers.

Goldsmiths is at the centre of this particular protest, but it’s not the only British institution to have been called out by the Guardian’s investigation – others named include Oxford University, London School of Economics and University of the Arts London.

During the hour and a half protest students make their demands clear: they’re requesting an independent inquiry into accusations of harassment, as well as mandatory consent and accountability training for all students and staff.

As the group begins to disperse, I approach a trio who were at the centre of the protest holding up placards (namely “THIS CONCERNS US ALL” and “A 10 POINT PLAN BY STUDENTS”). Danielle, Monah and Chloe are all MA students who were taught by professor Sarah Ahmed before her resignation from Goldsmiths, an act of protest against what she saw as the normalisation of sexual assault. They sit together on one of the stone benches, supporting each other with nods and cheers as they speak. 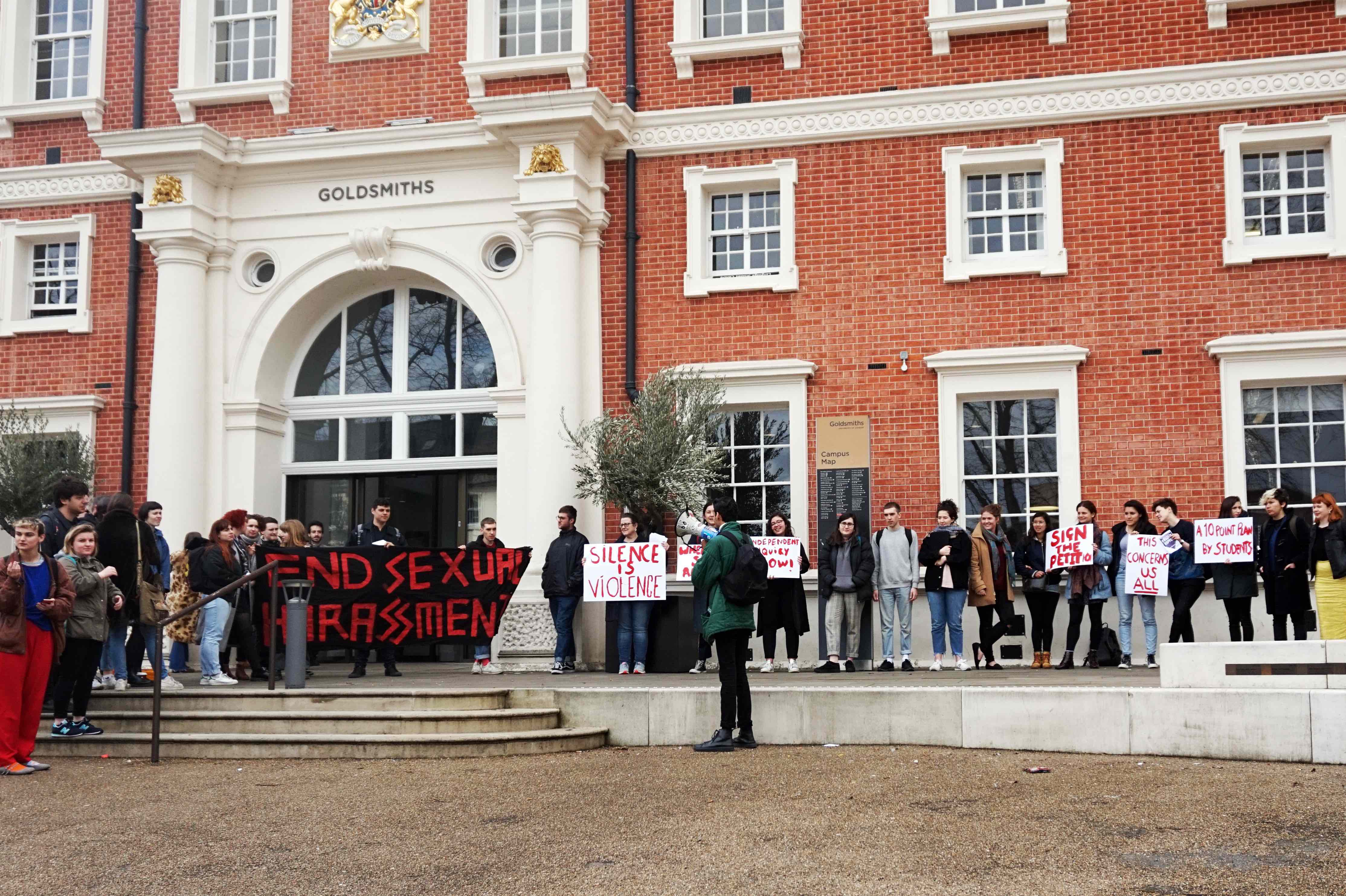 “It is specifically difficult to speak out against a tutor if you’re a student because you might potentially lose your advisor, your entire course – you might feel like you’re putting your career in jeopardy,” says Danielle, a first year Gender, Media & Culture MA student who led the chants during the protest.

“When it comes to student-staff sexual misconduct, some of the harassment doesn’t fit into specific guidelines. Sexual harassment is a complex and multifaceted issue, which is why institutions try to compartmentalise it, rather than attempting to gain a better understanding of it.”

According to the protesters standing out in the cold today, the issue of harassment goes far beyond only a gender dynamic on campuses; it has to do with the power play present in academic relationships.

The under-addressing of harassment seems to have become part of university culture worldwide. Columbia University made the news throughout 2014 for Emma Sulkowicz’ mattress-carrying protest, looking to draw attention to  the issue of sexual assault at the university after she accused a fellow student of rape in 2012. At the end of last year, a man accused of three accounts of sexual assault was allowed to graduate from one of Brazil’s most respected universities, USP, and is going on to become a doctor after serving the minimal penalty of being suspended for a year and a half.

Right now, the protesters are asking for an open, transparent discussion about sexual harassment that highlights it for what it is – a systemic problem that is highly connected to power dynamics present in all academic institutions, worldwide. This includes spreading awareness about how common a problem it is, in order to make victims feel safer when speaking out. 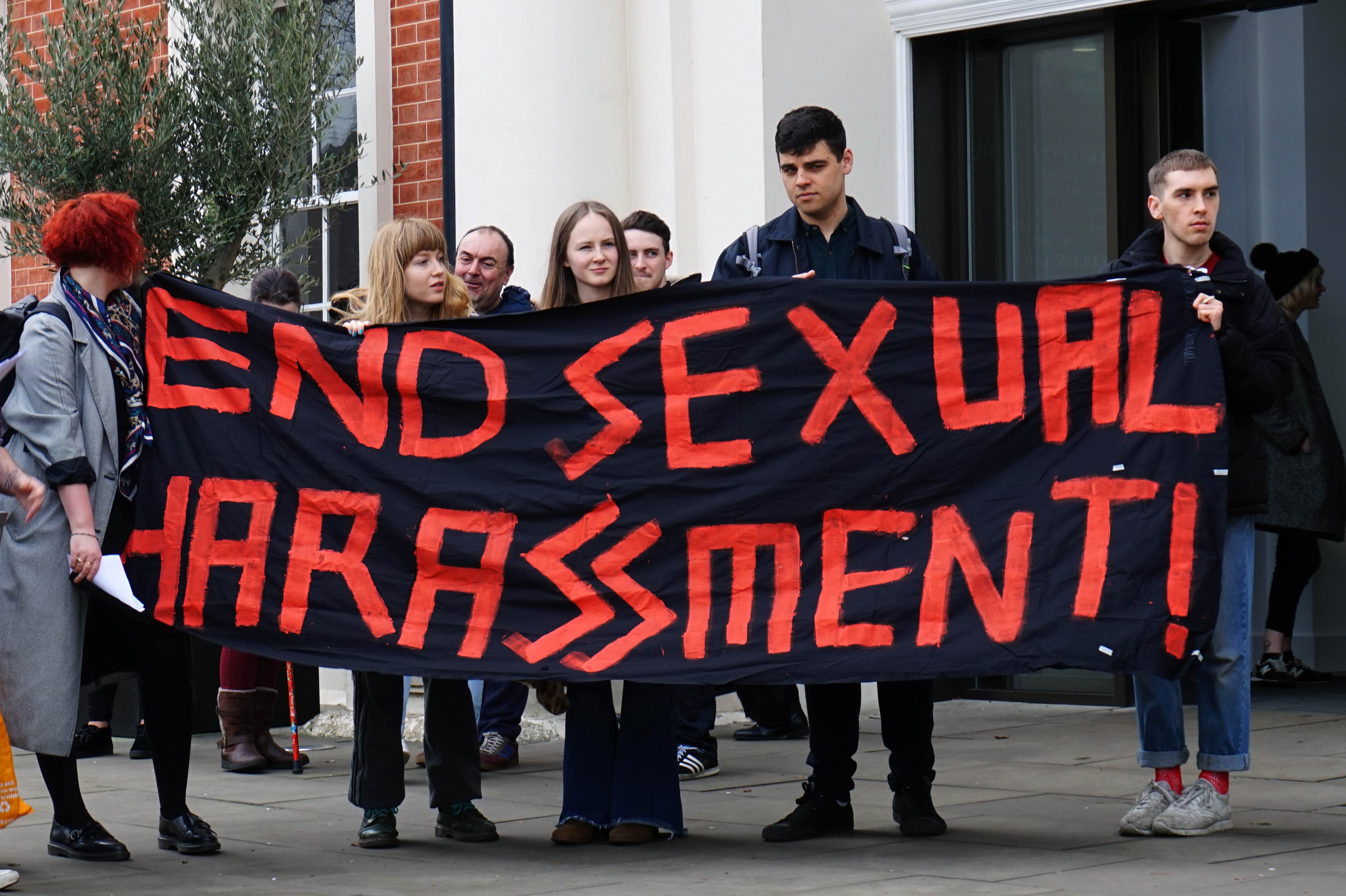 “This extreme individualisation of the issue of sexual harassment only serves to isolate survivors,” adds Chloe, a second year Masters student. “It makes people feel like this is one singular person screaming ‘sexual harassment’, one person who has been wronged, but this is not one person. It is a crowd of people who have been wronged, who have been silenced. People cannot speak out for a variety of reasons.”

It’s clear that universities aren’t prepared to deal with the issue of assault. Only four UK universities openly declare rape and sexual assault to be grounds for extenuating circumstances, meaning victims of trauma could be forced to choose between continuing their studies or dropping out, regardless of emotional distress.

The lack of openness in addressing sexual assault on campus has very real consequences, as I’m told by a first year student who’s stopped to watch today’s action unravel.

“I was sexually harassed at the end of last year, and I just dealt with it myself,” she tells me. “It happened outside of university, but it affected my studies very badly. It was a nightmare. I didn’t think to turn to the university, because I just thought there would be nothing there to help.”

“Let’s say I wanted a suspension of my studies to recover – I looked at the form provided and I thought ‘they’re never going to give it to me’, because assault isn’t counted as one of the extenuating circumstances. Even if it was – will it need a police report? Proof? I thought my word wouldn’t be good enough.” 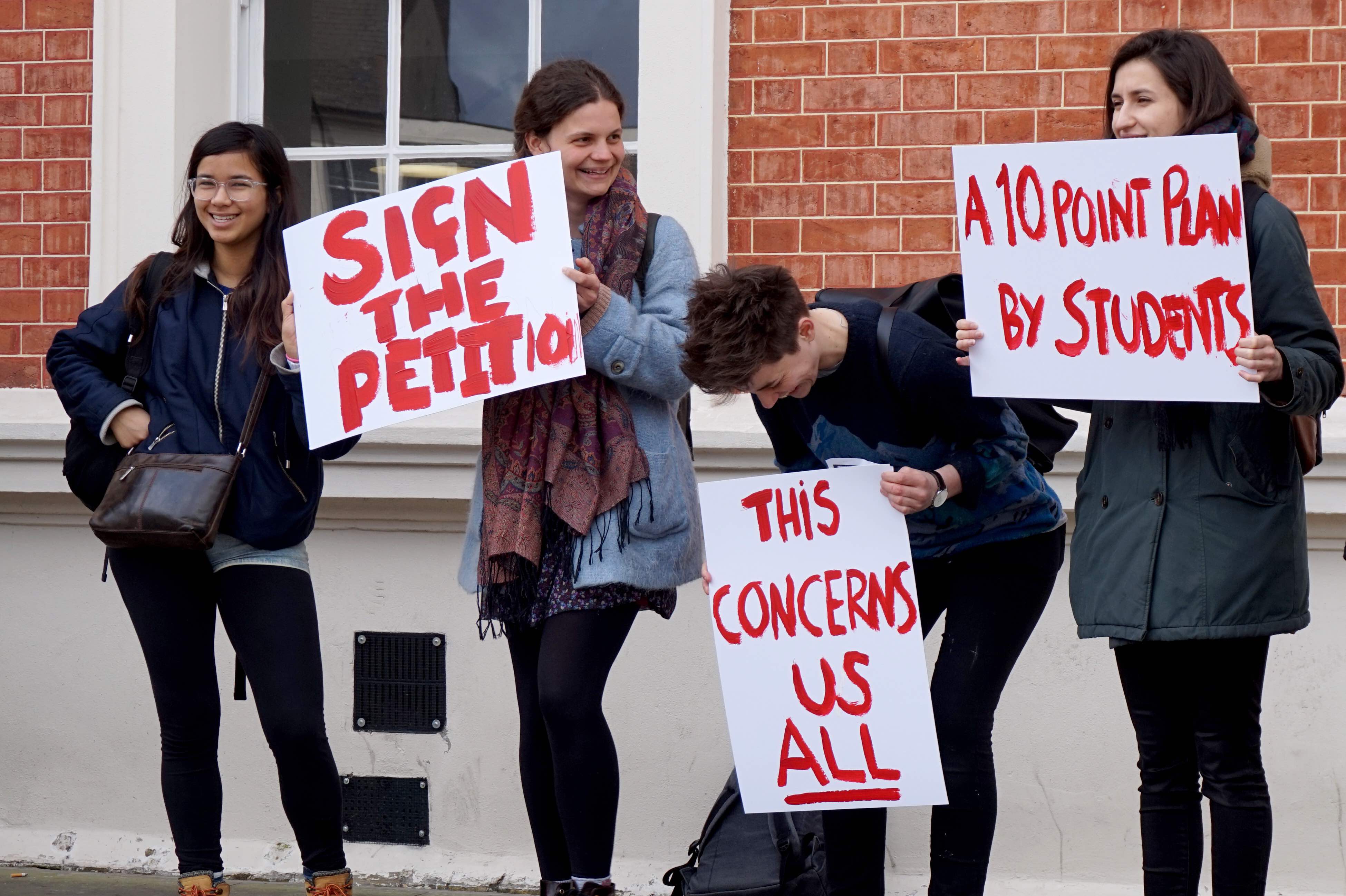 Although Goldsmith’s has come forward to admit there has been inappropriate behaviour at the university in the past, and they’re set to institute new sexual harassment policies (namely a 10 point plan) following the initial enquiry in 2016, now they’re being accused by protesters of having used Non-Disclosure Agreements to protect their reputation, and by doing so, furthering a “don’t ask, don’t tell” culture.

The university is said to have paid almost £200,000 in compensation to students who have come forward with sexual harassment claims against members of staff in the last six years.

“Our fees are being used to silence people and shut down our departments, rather than address something that is a huge and systemic issue,” explains a third year psychology student who participated in the protest but asked not to be named. She continues: “As services in universities are being cut, people not only are paid off with non disclosure agreements, they’re paid off with counselling – it is so difficult to get that it is used as a bargaining tool.”

Throughout the UK, the fight has been going on for years, and it’s continuing now. The National Union of Students has previously called a summit on ‘Lad Culture’, seeking to address the general issue of sexism in universities. They’re now also working with The 1752 group to research misconduct of staff towards students, looking to map out the problem and institute a national policy that addresses these issues in an open, clear way.

A spokesperson for goldsmiths UoL told Huck that sexual harassment was a deeply serious issue and was being addressed at the university. “Our 10-point plan, which was shared with students and staff last year, provides a blueprint for this work,” a spokesperson from Goldsmiths tells me. “It includes a definition of sexual harassment, the establishment of an advisory board to oversee our work… and the creation of a post to review and refresh the university’s approach to addressing sexual misconduct.”

“Through this work our ambition is for Goldsmiths to become an example of good practice in this area both for the Higher Education sector and also for wider society. Regrettably, sexual misconduct affects many institutions and we hope that our work will help challenge and overcome this corrosive issue.”

But right now, on a grey Monday afternoon, this group of students are taking matters into their own hands in a call to arms not only to other students, but to staff members and management, not just at Goldsmiths, but universities around the country and beyond.

Linkedin
RELATED ARTICLES
OTHER ARTICLES
The idea that a younger generation is abandoning work has become a popular narrative online, but it doesn’t necessarily reflect reality.
A 37-year-old woman shares how her abortion led her to become a clinic worker, and the abuse she’s received in that role.
Financial turmoil is pushing people who work in the sex industry into more dangerous and desperate situations as a means of survival.
Birdy Chu reflects on documenting the historic moment in which the territory was formally passed back from the UK to China.
Cindy Campbell recounts how her brother ushered in a new era of musical culture at a party she held in the Bronx in ‘70s.
The two-day long event returned to London this year, showcasing a spectacular parade, steel bands and Caribbean food.