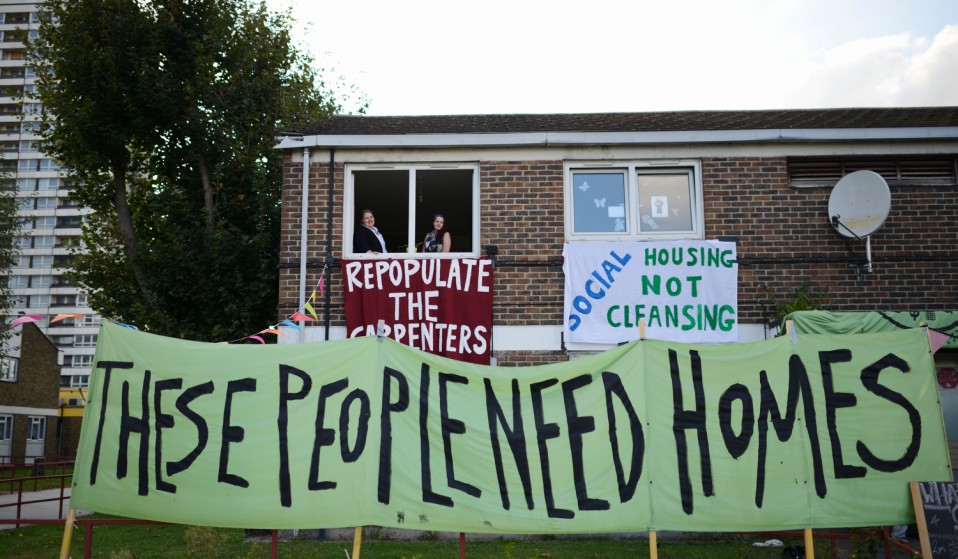 Writer, musician and activist Bryony Beynon, who co-directs Hollaback London – an org to end street harassment – curates the most inspiring acts of activism in 2014.

Writer, musician and activist Bryony Beynon, who co-directs Hollaback London – an org to end street harassment – curates the most inspiring acts of activism in 2014.

From anti-austerity campaigns in Spain to housing justice in London, pro-democracy protests in Hong Kong to #blacklivesmatter in Ferguson, 2014 has seen outrage over injustice spreading faster than ever, with movements galvanised and mobilised by technology. Using online platforms as an activist-powered international solidarity engine, these movements are leaderless, networked and organised far outside the traditional unions or parties. What’s more, these struggles are only set to burn more brightly in 2015, so get informed and get ready.

A pro-democracy movement in Hong Kong bloomed in Autumn, nearly unprecedented in recent years and catching the not-exactly-protest-friendly Chinese government by surprise in its sheer scale and boldness. Formed in response to a ruling against fully open elections in 2017, the protests – a series of camps and strategic roadblocks that were met with tear gas and rubber bullets – were driven by a genuine cross-section of society from lawyers and church ministers to the charismatic 17-year-old Joshua Wong. Occupy HK has sent shockwaves through Asia even as the last of the camps is dismantled, it’s certain that Beijing is listening cautiously for further dissent in 2015.

The Focus E15 mums – a group of single mothers on the sharp end of the UK’s housing crisis – caught headlines this summer as their ongoing campaign, challenging their local borough of Newham to provide decent homes for working-class families being forced out of London, caught celebrity interest from Russell Brand. With community backing they occupied an empty house on the boarded-up Carpenters Estate, making a very clear point about liveable homes left standing empty, and embarrassed the borough into rehousing 40 of Newham’s many hundreds of homeless families there.

In late September, 43 students from Ayotzinapa in the Mexican state of Guerrero were kidnapped. The disappearance has sparked a mass movement in protest at state and government collusion with drug cartels, who are believed to have murdered the students on the orders of a now-absconded mayor (who may have orchestrated the kidnapping). Protests are raging with government buildings occupied, looted and burnt, as tens of thousands are out on the streets. The words on the lips of many are ‘Fue el estado’ – The state did it.

All women on strike in Catalonia

On October 22, the city of Barcelona ground to a halt as thousands of women, whether working, mothers or students, downed tools and took to the streets, occupying buildings and blocking roads in protest at austerity, sexism and exploitation, not just in waged work but also domestic, social and sexual labour. #vagadetotes is an inclusive movement – bringing together more than 600 feminist and community groups – that highlights how women’s labour makes capitalism possible, and calls on them to strike. Their day of action went vastly underreported but their next action planned for early next year certainly won’t – it’s a general strike.

Action on sexual violence at US universities

It began as an art statement in response to a traumatic experience, and now it’s a global movement. Emma Sulkowicz – a senior at Columbia university in New York City – reported her rape at the hands of another student to the administration in April 2013. When the university declared the rapist ‘not responsible’, Emma embarked on ‘Carry The Weight’ – a performance art project to make her struggle visible to everyone who would see her. She did this by carrying her mattress from her dorm room – the site of the attack – everywhere she goes on campus. This year, a solidarity movement sprung up around Emma’s incredible bravery, which has spread to students around the world pledging to, ‘Carry the weight together,’ when it comes to sexual violence and injustice, particularly highlighting the poisonous extralegal kangaroo court system enacted by US universities when women do come forward. In the UK, women’s societies like UCLU are dealing with similar issues with a similarly brave and bold style, helping silenced survivors to speak out and holding perpetrators to account.

This week, bills passed in both Northern Ireland and the Republic of Ireland criminalising the purchase of sex, a move that will push sex work underground and make it much more dangerous. Sex workers across the world are facing similar oppressive and dangerous laws. These laws isolate and prevent them from accessing support for fear of arrest, and are – confusingly for many – very often championed by feminists who claim to care about women’s safety. Sex workers and their allies are now organising both online and in the street, demanding that their voices be heard. Projects like the Sex Worker Open University and English Collective of Prostitutes in London and the Scarlet Alliance in Australia are using social media to amplify voices and advocate for their rights and for full decriminalisation. Two victories for 2014: In March, a judge overturned police attempts to shut down premises across Soho in London, following aggressive raids by police where sex workers were dragged into the streets; And in November a sneaky bill introduced to parliament, which would have criminalised sex workers’ clients, was defeated without a second hearing thanks to a mass mobilisation.

New left parties on the up?

Today’s social movements are leaderless, networked and driven by non-voters, so it is no surprise that they are rarely the terrain of traditional party politics. In Greece and Spain this year, a system in turmoil has seen two anti-austerity leftist parties emerge through the chaos and build on the exasperation of the working class and the youth to mount a real challenge to the status quo. Podemos (or ‘we can’) is the far-left Spanish political party formed at the beginning of 2014 by a few academics – is by the year’s close, the country’s biggest party by membership. In May 2014 Greek Coalition of the Radical Left – known by their acronym Syriza won the Greek European Parliamentary elections after less than two years in formal existence. Similar in their rocket-fuelled trajectories, both parties have caught popular imagination this year. Whether they find success in elections and what they do with it is unclear, as is what this would really mean for the lives and fortunes of those who have supported them, but one thing is certain: the two-party system in both countries is done for.

Perhaps the highest profile movement for justice in 2014 is the global uprising over police racism. Community organising and protests over police impunity in Ferguson, Missouri, has been going on since long before November, but it was then that the decision not to indict Darren Wilson for the murder of teenager Michael Brown was announced. This sparked protests around the world fuelled by online mobilising #blacklivesmatter, including a London solidarity rally and spontaneous march attracting thousands of young people, which shut down much of the West End. With another non-indictment decision from another grand jury in New York over the police murder of unarmed father of four Eric Garner, protests have reignited and look set to continue. His last words – caught on camera by the only person to be arrested in this case – have been heard around the world as everyone from online activists to professional sports players have shown their shared demands for police accountability – #icantbreathe.

Find out more about the Hollaback London! movement.

Linkedin
RELATED ARTICLES
OTHER ARTICLES
Huck asks US police brutality experts if victims will ever get justice and what needs to change to end the violence.
When a group of single mums occupied an empty council estate near the Olympic Village, they made the UK housing crisis impossible to ignore. But what’s driving Londoners out of their homes?
"People's Republic of Amnesia" author Louisa Lim on Umbrella Man and Tank Man and how the spirit of Tiananmen Square has influenced the Hong Kong pro-democracy protests.