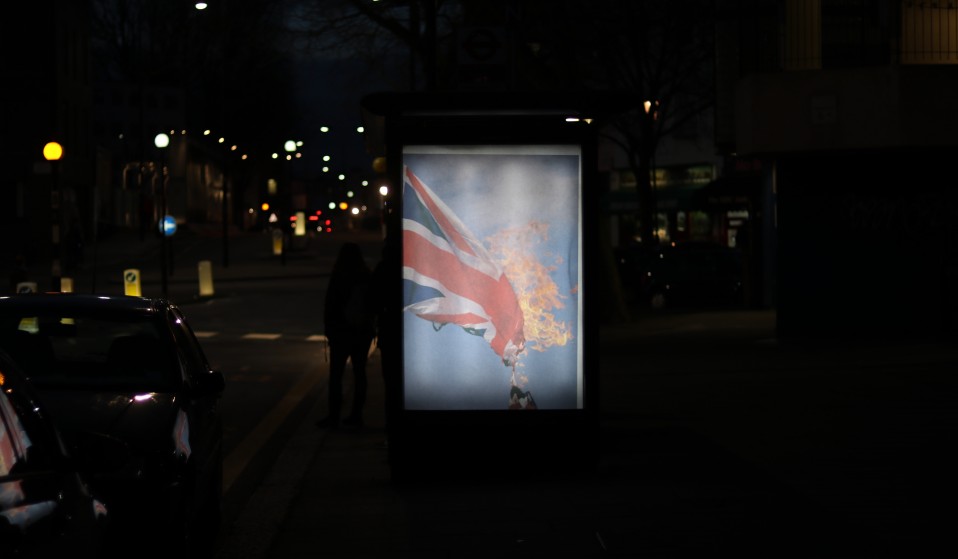 The right-wing press have been whipping up hysteria after an image of a burning Union Jack was spotted in London, but it's got nothing to do with terror.

The right-wing press have been whipping up hysteria after an image of a burning Union Jack was spotted in London. But it's got nothing to do with terror, if only they'd bothered to look.

A poster showing a burning Union Jack flag sparked outrage yesterday in Britain after the rightwing press claimed “vandals” inserted it into a bus shelter in west London as a deliberate and inflammatory response to the Westminster terror attack.

According to the Telegraph police have launched a probe into the “sick” poster found in west London.

“Wtf is wrong people!” angry nationalists asked on Twitter, as a the tabloid media insinuated to a near-hysterical public that those responsible might be linked to terrorism.

The poster was actually designed by an artist and installed by activist group Brandalism as part of #SubverttheCity, a week-long international campaign to reclaim public spaces, replacing adverts with “art and ideas”.

The install — and the (many different) poster designs — were planned long in advance and had nothing to do with the attack on parliament. The activists involved are shocked and slightly frightened by the backlash against what they envisioned as a far more positive project than past subvertising campaigns which have — to name a few — explicitly targeted the police for being racist and called your job “bullshit”. 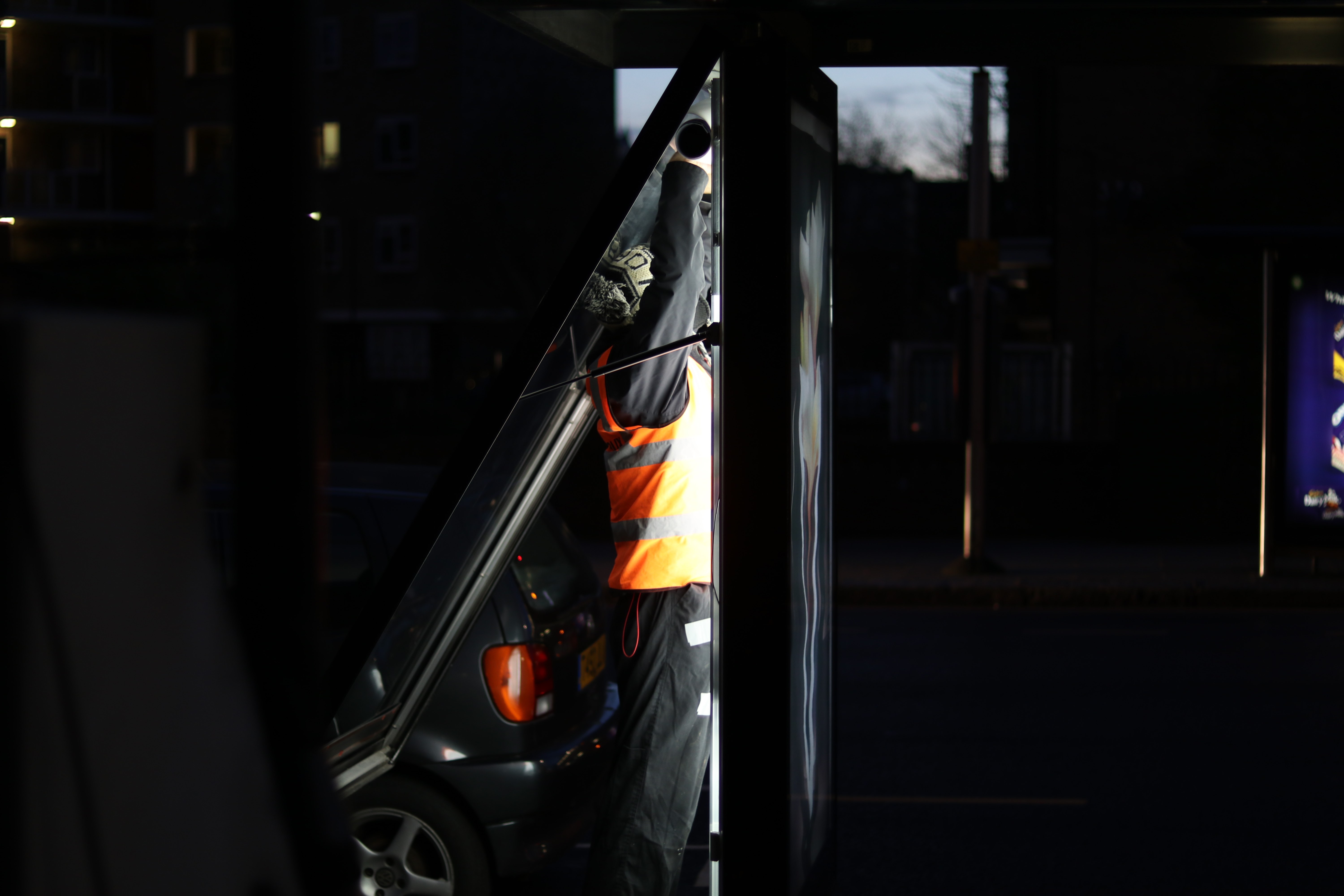 “It’s all coming over a bit John Lennon” someone from Brandalism admitted — slightly embarrassed — as he explained the install to me the day before it happened, sending me a photograph of an “imagine an alternative” poster another group had just slipped into the ad space on a tube train.

But unfortunately, bad timing has meant the action wasn’t interpreted quite the way it was intended.

As Britain First raged about “treason against our country” on social media, I sat down with someone from Brandalism to clear a few things up:  What was the design on the poster actually meant to represent? What was the action supposed to be about? And are they scared of being linked to Isis by a police probe?

Hi Brandalist — how are you feeling today?
A little bit afraid that Britain First are planning to hold an impromptu demo on my groin?…

I accidentally swiped too far right on my smartphone just before I went to bed last night and saw the Telegraph had covered it, and that there was supposedly a “police probe”. Then I didn’t really sleep much and by the time I checked again basically the entire mainstream media had a picture of a burning flag on their websites.

Being called a “sick idiot” by the Metro at 4am is pretty insomnia-inducing. 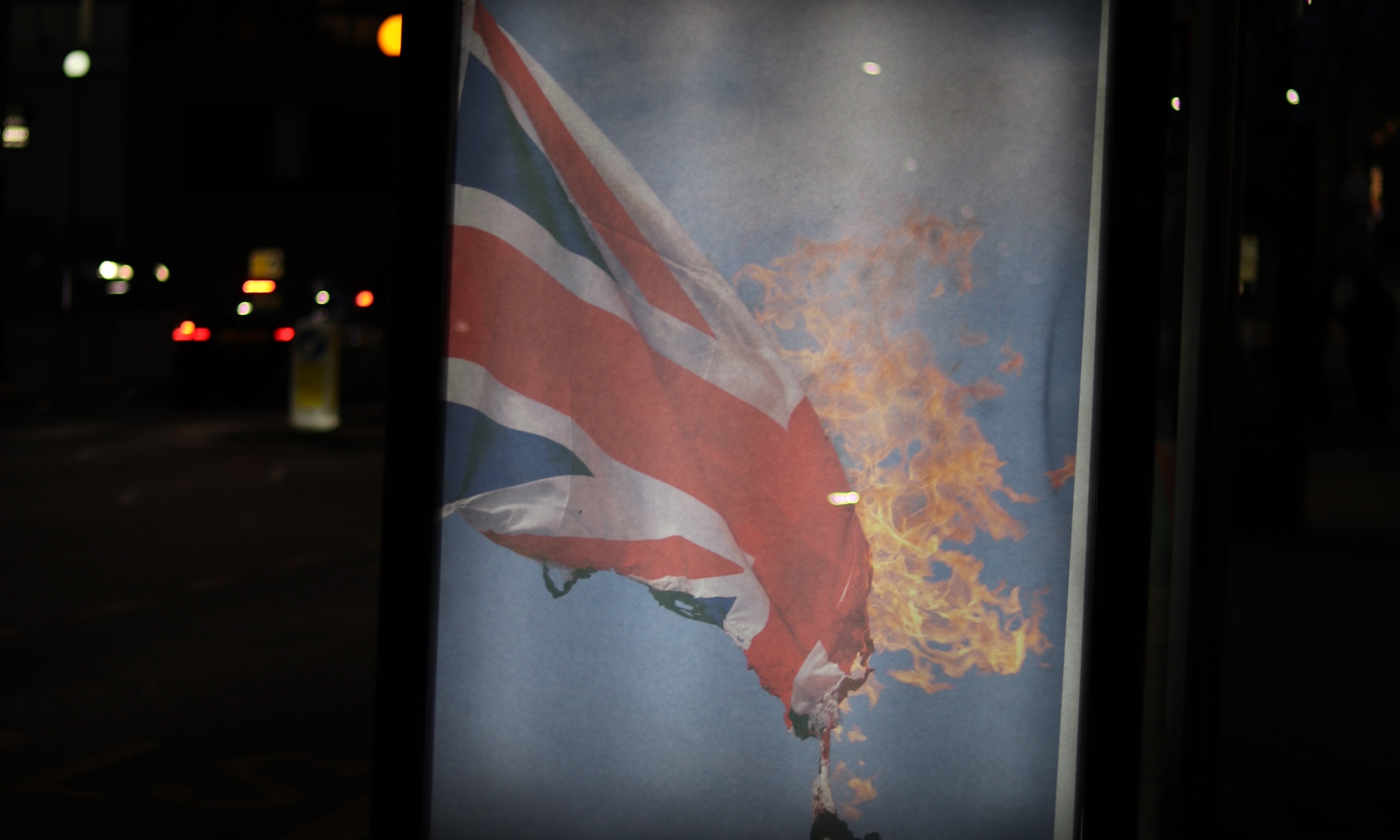 You don’t appear to be a “sick idiot” or member of Isis… So why did you put a burning flag poster up?
The poster was just one of around 70 different designs by various artists that were put up all around the world, asking them to envision alternative futures for our cities and societies.

The install was part of #SubvertTheCity — a week of creative action which aims to question the dominance of commercial messaging in our shared public spaces through different kinds of interventions… and that’s why we did it.

Hmmm… what exactly is Subvert the City?
#SubvertTheCity is an international advertising takeover, co-ordinated by Subvertisers International, which is an umbrella group for subvertising and anti-advertising activists from countries all around the world.

It’s asking people to go out and take direct action against advertising and share their interventions online. It’s been pretty popular so far, I’ve seen actions happening in Mexico City, Tehran, San Francisco, Buenos Aires, Melbourne and all over Europe and the US.

And why did you decide to get involved?
There’s a double reason to doing these takeovers. The first one I guess is a slightly more negative one… to continue to challenge the role consumerism plays in the world, the way we relate to ourselves and others and the environment. But I suppose the unique component of subvert the city is actually about imagining what lies beyond that… so asking artists to develop their own understandings of what an alternative future beyond advertising, beyond consumerism would look like.

As a result artists have sometimes played quite directly with issues of advertising and what lies beyond that, others have taken it slightly more broadly and have therefore responded with works that are about: What would it look like if we had a world in which borders were no longer stopping people from travelling? What would a better more beautiful societies look like?

I think that’s the uniqueness of this action, that it is actually trying to bring messages of hope in times that are actually quite desperate and dark to many people, to actually really go beyond pure critique, add a bit of poetry to people’s lives.

So if it wasn’t a response to the attack, when did you put the poster up?
The poster went up on Wednesday, the same afternoon as the Westminster attack.

All of the tabloid media have decided it was a “sick” and “disgusting” response to the attack, but actually it was just an unfortunate coincidence. It went up on the same afternoon and I was only vaguely aware of what had happened – I didn’t make any connection between the artwork and the attack at the time, it was just one of many different designs I’d been given to install.

When I saw it I did think it was pretty punchy, but I just didn’t think it would kick off in quite this way – it certainly wasn’t intended to be disrespectful to anyone who was a victim of the attack. I guess even on an ordinary day it would have been controversial, because flags are hard to wave when they’re all ablaze. 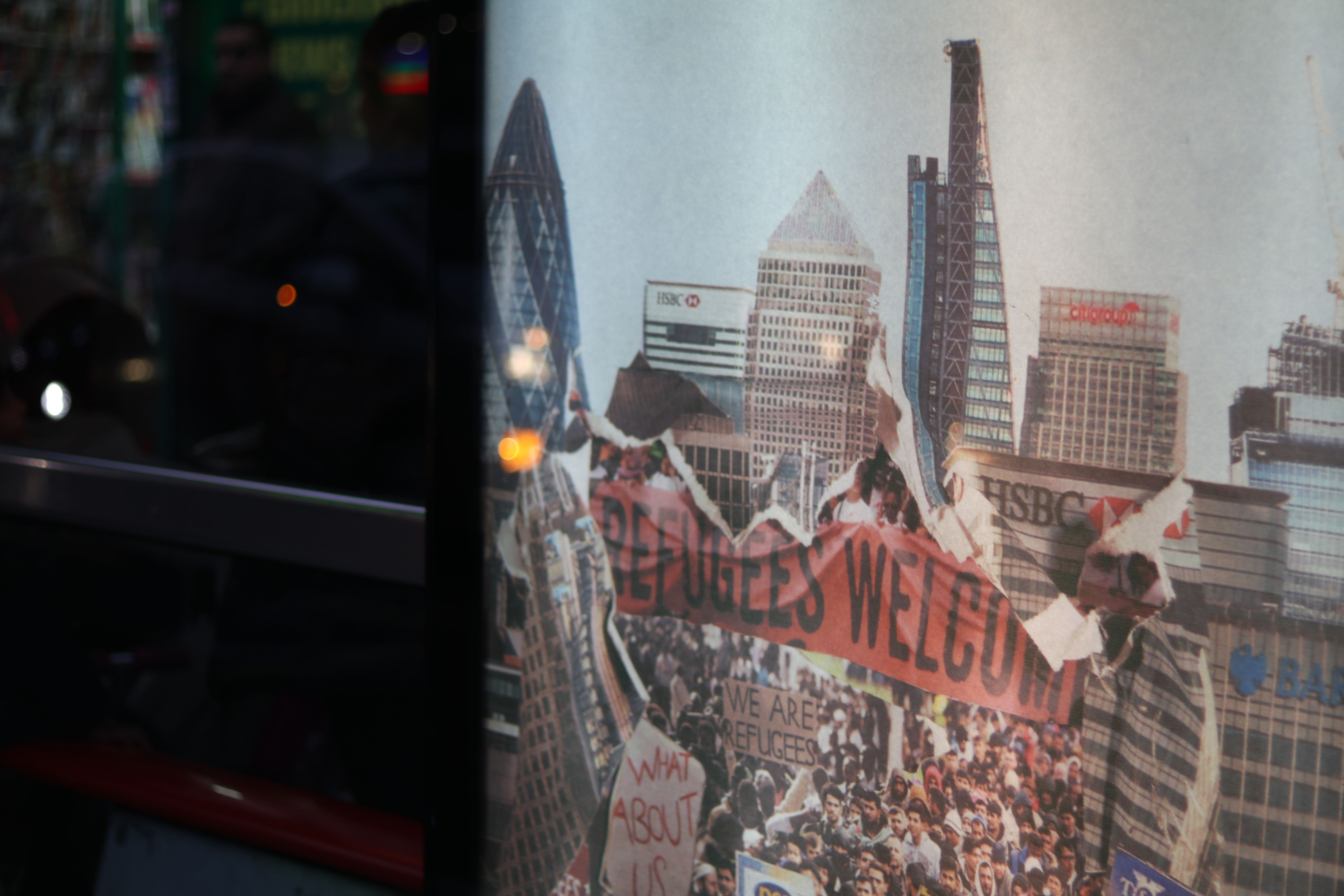 Yeah… even without the unfortunate timing, the burning flag design was obviously going to be controversial— where did it come from?
It’s by an artist called Oliver Ressler from Austria. This is what he said about it in his artist statement, which I think pretty much hits the nail on the head:

“The burning flag is a still image from a film project entitled What is Democracy? that discusses the contested notion of “democracy”, which is misused for the maintenance of order by those in power; while at the same time acknowledging that ‘democracy’ still represents an ideal hundreds of million people in the global south desperately want to achieve.”

What do you think about the way the rightwing press have reacted?
It was shocking but maybe not that surprising? I mean, the poster is a comment on the state, democracy and nationalism and it’s pretty ironic that the right wing press have reacted to a perceived slight on the flag in such a nationalistic way. It’s sort of funny that every last media outlet that featured the story basically copied and pasted the fury from the Daily Mail. Some of the articles actually say that nobody knows who did it or what the motivation for it was at the same time as saying it’s sick and disgusting.

I spoke to the artist who designed the flag posted again today and he said some good stuff about it: “There is no excuse for terrorist attacks such as the recent one on Westminster Bridge. But the fact that the simple act of burning a printed textile causes such an upheaval can be seen as an indication for the weakness of the system of representative democracy that in times when people are not being represented by politicians any more, it even seems more dependent on such empty signifiers such as a flag.”

I’ve actually seen a lot of swapped bus stop and tube ads recently, it seems like subvertising has blown up as a movement in London in the last couple of years — would you agree?
Yeah, over the past year or so subvertising actions have been happening in London with increasing frequency – from the feminist messages of Sisters Uncut to co-ordinated anti-advertising campaigns by Special Patrol Group and individual subvertising artists like Hogre, Illustre Feccia and Protest Stencil.

There’s also been a couple of books on subvertising by Dog Section Press (Advertising Shits In Your Head and Subvertising by Hogre), that talk about a subvertising movement. And this week’s #SubvertTheCity action is a good example of subvertisng as an increasingly co-ordinated and international movement.

Follow #SubvertTheCity for updates on the international week of action

Linkedin
RELATED ARTICLES
OTHER ARTICLES
With skyrocketing rents, packed out viewings, bidding wars and more, renting in London has never been harder.
Photographer David Corio’s archive offers a glimpse inside a revolutionary era of music and nightlife.
By turning a real-life crisis into daytime television fodder, TV bosses have once again shown themselves to be completely out of touch with audiences.
Rhiannon Adam spent three months capturing an ageing society wracked by division, isolation, and the aftermath of scandal.
Yesterday thousands gathered outside Buckingham Palace after news of the Queen’s death broke.
Cindy Campbell recounts how her brother ushered in a new era of musical culture at a party she held in the Bronx in ‘70s.