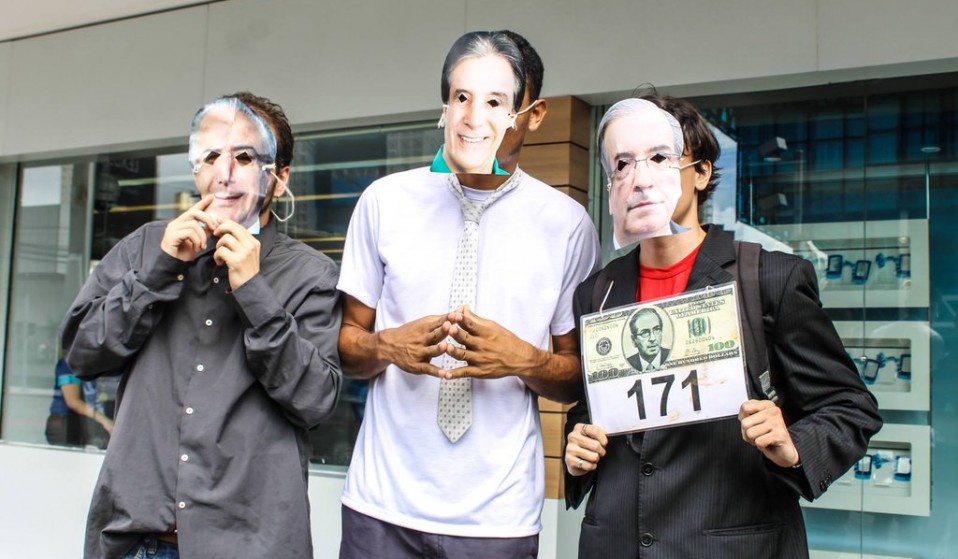 Months of political circus in Brazil have come to head as Dilma Rousseff of the Worker’s Party (PT) has finally been stripped of her presidency. Following a drawn-out impeachment process, in which a corrupt lower house voted to impeach Dilma (a decision which was annulled and then reinstated within 12 hours), the senate’s decision to take on the investigation triggered her replacement by an interim government, led by the right-wing Michel Temer.

Months of corruption revelations, political gridlock and a sinking economy have caused many Brazilians to totally lose faith in their politicians. But the worst had yet to come.

Temer, the immensely disliked leader of the conservative PMDB party, has ushered in a new cabinet that is one of the most regressive in the country’s modern history. It’s corrupt, unelectable and neoliberal, and features an exclusive cast of old, white men – remarkable in a country famed for its rainbow-coloured diversity.

Even the hated 1964-1985 military dictatorship was more representative of the country:

Proposed cabinet of about-to-be-Brazil president #Temer is first without a female member since 1979 https://t.co/5k9z0ZIKno

So, how did this happen? Months of agitation by right-wing politicians, supported by a rabidly conservative media have advanced the case against Rousseff (who is one of the few politicians under investigation for corruption not accused of enriching herself) and succeeded in installing a politician tainted by scandals of his own, who a majority of Brazilians want removed from power. Through political intrigue, the right have recaptured power, something they failed to do at the ballot box for nearly twenty years.

A majority of Brazilians want Temer impeached and just two percent said they would vote Temer for president in 2018, according to a recent nationwide poll by Datafolha.

In his usual fashion, Glenn Greenwald gets to the heart of the matter:

CNN just unwittingly summarized a major cause of what just happened in Brazil https://t.co/hZ6b9OQPom pic.twitter.com/MoSaPIkLug

Temer could serve until the end of Rousseff’s term in 2018, but pushing through such controversial policies that will impact millions of Brazilians on a non-existent mandate will likely create a profound counter-reaction. General strikes? Riots? Police repression? What happens next is anyone’s guess.

Linkedin
RELATED ARTICLES
OTHER ARTICLES
The issue of workers being denied toilet dignity has worsened during the pandemic. And for female couriers, in particular, it’s taking a toll on their mental wellbeing and ability to work.
Countries in the Global North are disproportionately responsible for driving greenhouse gas emissions. To give frontline communities the freedom to fight the climate crisis, we must take a reparative approach.
Photographer Chris Hoare discusses his latest project documenting Bristol’s allotments, which over lockdown, saw a surge in interest among people seeking out solace and community spirit.
Photographer Samuel Cueto recalls photographing fringe communities in Bangkok, Phuket and Pattaya over several years, where he encountered gang members living on the margins of society.
A week of delays and incompetence over a contentious video has thrown Starmer’s commitment to LGBTQ+ rights into question. Can the Labour leader ever win back the community’s trust?
Director Shalini Kantayya discusses her new film shedding light on the urgent threats machine learning poses to individual freedoms and democracy, and what society must do to combat these sinister technologies.