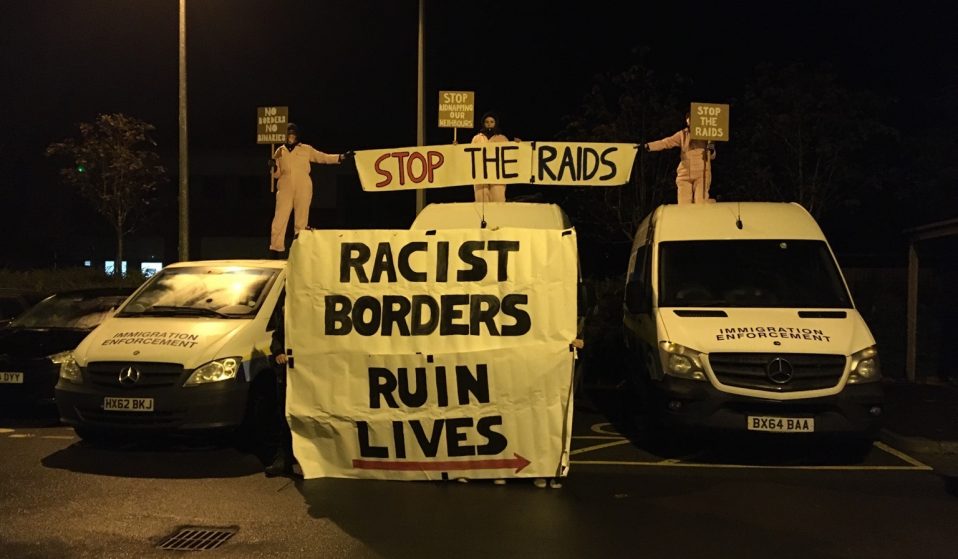 Just one day after 39 bodies were found in a lorry in Essex, activists took action against targets – including the Home Office and coach company W&H Tours – allegedly associated with deportation.

Just one day after 39 bodies were found in a lorry in Essex, activists took action against targets – including the Home Office and coach company W&H Tours – allegedly associated with deportation.

In the early hours of this morning, activists from climate and social justice group Reclaim the Power took action against multiple targets allegedly associated with the Hostile Environment.

The action took place in two UK towns. In Portishead, activists took to the roofs of Immigration Enforcement vans to stop them leaving the Home Office building. In Crawley, there were violent clashes between protestors and members of staff from W&H Tours, as demonstrators blockaded the company’s coach depot protesting their alleged involvement in providing transport for detainees being deported via controversial charter flights.

“Charter flights are brutal and barely legal,” said activist Eve Pearce, who was standing atop the tripod at the Crawley action. “People are dragged away from their communities and families in the dead of night and sent to countries where they can face persecution or death.”

“By working with the Home Office to transport people from detention centres to these flights, WH Tours are complicit in this violent and sometimes deadly process. Companies like WH Tours can play a role in ending the Hostile Environment by refusing to do business with the Home Office.”

We're opposing the #HostileEnvironment along with @reclaimthepower today. Because migration is beautiful, and nobody should have to live with the threat of detention, deportation or immigration raids and checks. pic.twitter.com/IXoALBBW4R

At one point during this morning’s Crawley action, an angry W&H Tours coach driver allegedly drove her car at the blockade, narrowly missing it. After being joined by a colleague, it’s claimed she began tearing down the protest banners, before attempting to topple the four-metre high tripod with a demonstrator still on top. Another W&H Tours employee is said to have threatened to “reverse a coach” into the protestors if they did not move in “30 seconds”. (Huck has reached out to W&H Tours for comment but has received no response.)

At the Portishead action, 15 people wearing pink overalls attempted to stop Immigration Enforcement vans leaving the Home Office building. They were holding placards which said “stop the raids” and “stop kidnapping our neighbours”.

“The Home Office conducts raids from this building, with these vehicles, that tear people from their homes and communities brutally and barely legally,” said Griselda Dunbar from Reclaim the Power. “Last year Mustafa Dawood, a young Sudanese man, died fleeing in fear from one of these vans. There has still been no inquiry into his death.”

here’s the moment coach drivers from the company tried to pull a protestor to the ground: pic.twitter.com/eP6d5Q2kYp

The protests are a repeat of a similar action undertaken by the group in July this year, which saw activists target Hallmark coaches – another company used by the home office to transport deportees to airports across the country.

The Hallmark targeting was part of four days of protests held by the Power beyond Borders mass action camp. The group also held a demonstration outside of the Home Office in central London, putting newly appointed Home Secretary Priti Patel “on notice” to end the hostile environment by October 20 or face escalating action.

A report released by independent monitoring board in June this year stated that many deported via charter flights were restrained “unnecessarily” and “denied dignity”. In 2018, a coach carrying deportees to Gatwick airport caught fire en route, with those on board allegedly held and handcuffed by guards from private security firm Tascor while smoke and flames filled the cabin. A spokesperson from Capita, which owns Tascor, said at the time that it was “factually inaccurate that when the fire was identified the individuals were then handcuffed”. On leaving the coach one detainee fell and allegedly broke his wrist.

The action comes just one day after 39 bodies were found in a lorry in Essex. The tragedy is being investigated but has been attributed to human trafficking. Campaigners have stated that the deaths are inextricably linked with the Hostile Environment, with Maddy Allen, field manager for Help 4 Refugees, stating the Government had “blood on its hands”. 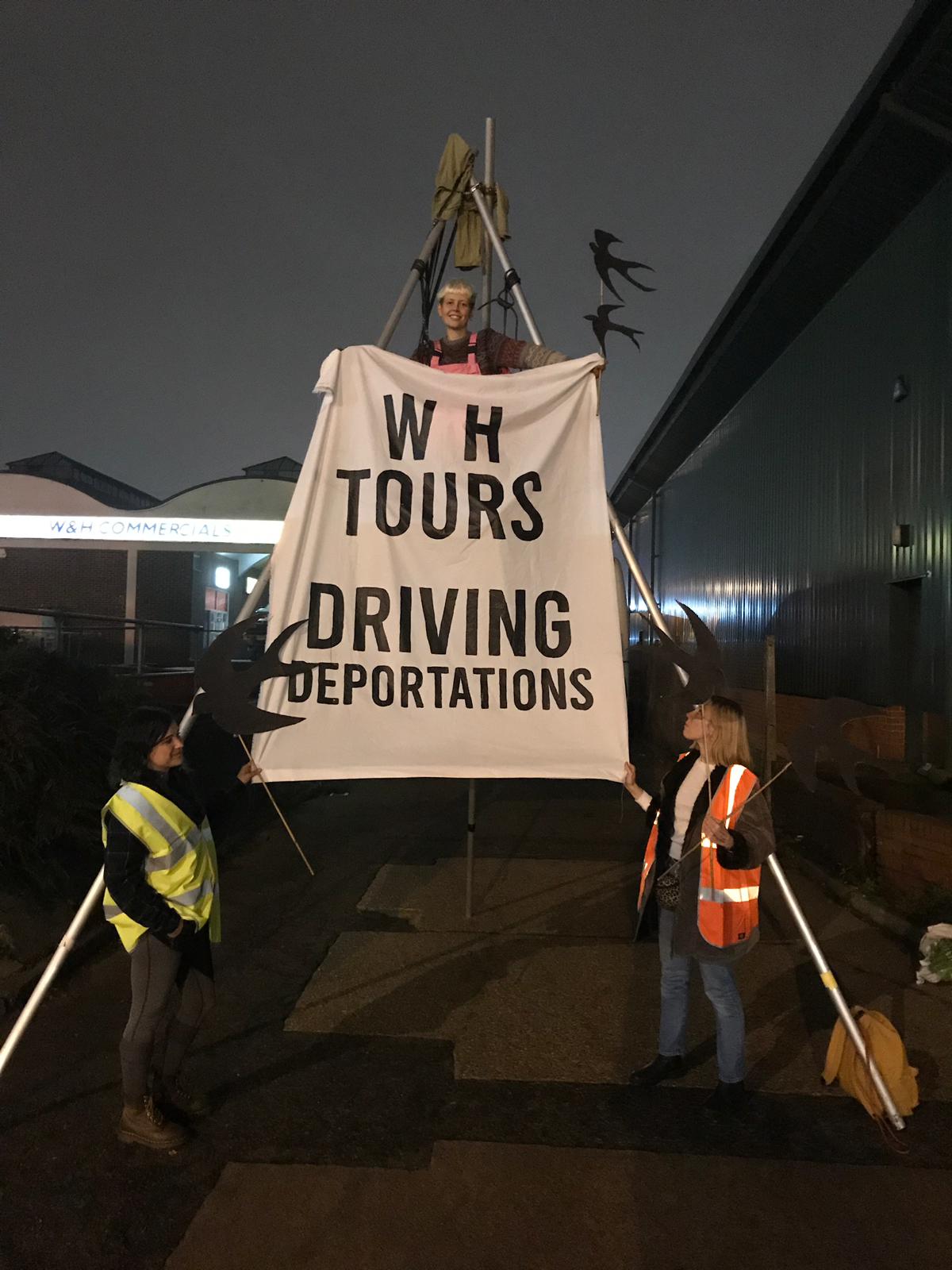 Learn more about the action, and how you can get involved, on the Reclaim the Power website.

Linkedin
RELATED ARTICLES
OTHER ARTICLES
Members of the collective share some of their reasons to run as part of #UnitedBySummits, a campaign that looks to uncover transformative power of the outdoors.
Photographer Phyllis Christopher recalls capturing sex and protest at a time when the city had become a haven for the queer community.
The author discusses her blistering new novel about history, revolution and queer love.
Our new magazine is here, starring the inimitable Mitski. Order your copy now and join us on a trip around the world.
The revered showbiz chronicler recalls his journalistic beginnings, documenting subcultural scraps in the ’80s.
Over the weekend, London locals came together to resist a pre-planned police raid targeting delivery drivers.