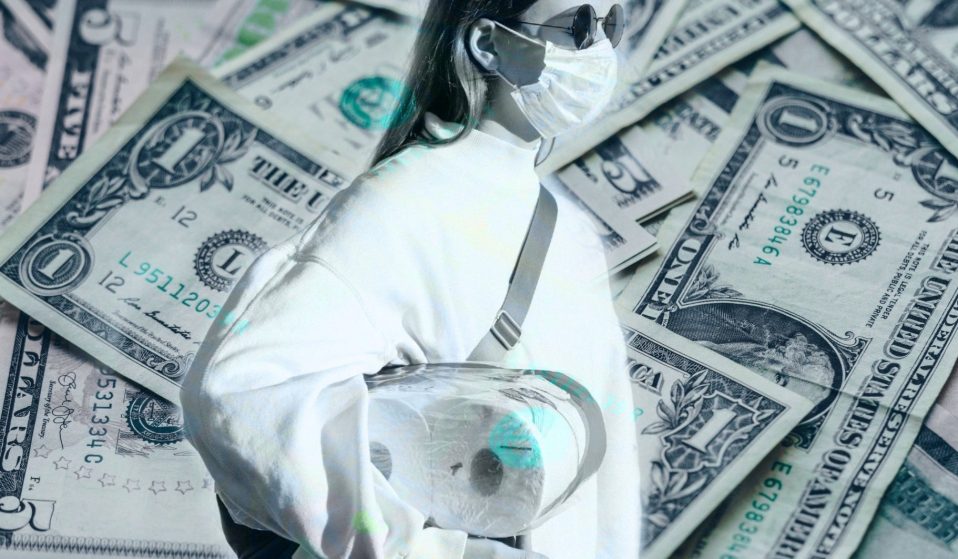 Campuses across the country have closed in response to the coronavirus crisis – but what about the students who have been left behind?

Campuses across the country have closed in response to the coronavirus crisis – but what about the students who have been left behind?

In March, colleges across the United States began abruptly shutting down their campuses to slow the spread of coronavirus. For some students, this simply meant going home a few months earlier than they had planned. For others, it meant facing precarious financial situations, abusive family environments, or entering a coronavirus hotspot for the first time.

Many schools have not provided additional student funding or tuition reimbursements, forcing low-income students to turn to social media to describe their vulnerable states along with their Venmo account information. Student-led fundraising initiatives have also begun popping up, including Duke Mutual Aid, which as of April 17 had received over $22,000 in donations, and the Stanford Student Support Fund, which raised $100,000 in its first 10 days of operation. In April, the Department of Education began distributing billions in relief aid to colleges, but university leaders claimed the amount was insufficient.

On March 11 at the University of Rochester, where I am a student, it was announced that the remaining spring semester classes would move online. Students were told to leave their dorm rooms by March 22 unless they were approved for an exemption. As emails from University of Rochester president Sarah Mangelsdorf and Students’ Association president Jamal Holtz rolled in throughout the week prior, extending spring break to March 23, cancelling commencement, and shutting down various centres of student employment – like the library, where I worked – students became increasingly anxious about the future. So some of them decided to do something about it.

Now I’m asking for help for me

University of Rochester senior Miles Perry, along with fellow senior Lilo Blank and public health professor Dr. Nancy Chin, created a petition asking the school to place remaining on-campus students in suites with one bathroom and kitchen to every four students. This would replace the dorm buildings, where upwards of 10 people share amenities. “I think even though the university has fared better than most institutions, it definitely has shown us it is still a business,” says Perry. “And just like businesses in this pandemic, the U of R has a disconnect with the needs of its customers: the students.”

Public health students also created a survey form where students who appealed the dorm eviction and received a decision could catalogue whether they have an alternate residence to go to if they were denied. If they didn’t have anywhere to go, the form listed an email that students could contact for housing assistance. “The petition was created because the COVID-19 response group I’m in began to notice that the only people being rejected to stay on campus were domestic students,” explains Perry. “After 88 people responded, we saw that literally the only people denied were domestic.”

“I think that this is grossly negligent on the university’s behalf. Some of the students they initially denied were immunocompromised, housing insecure, food insecure, or were being sent home to endemic locations like New York City.”

In response, University of Rochester spokesperson Sara Miller says that she isn’t sure if the 88 denied domestic applications was “an accurate figure”, and stresses that administrators are responding to student needs: “University leaders have been gathering input from students and working with student leaders on many decisions regarding academic and operational responses. For instance, when a large number of students indicated that they needed one additional week in March to prepare for the transition to online learning, University leaders listened and responded.” 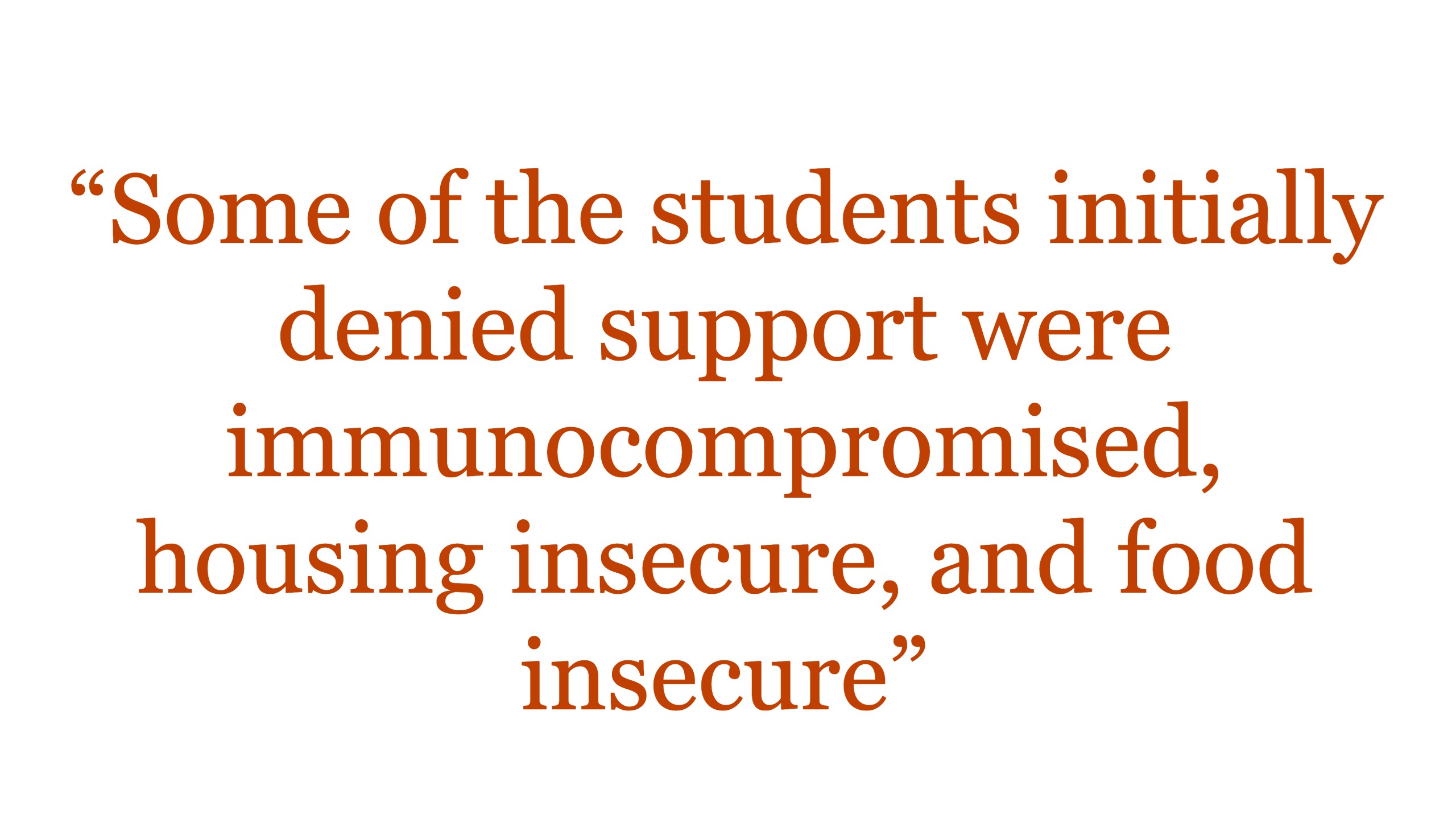 In terms of financial student support, Miller points to an emergency fund listed on the University of Advancement website. As of May 4, administrators only alerted former student employees that if looking to access the fund, they should email their supervisor or the Student Employment Manager. (My own supervisor said that he knew “absolutely nothing other than [the fund] exists”, though a list of students in need was being compiled.) The university also set up a Basic Needs Hub to support students, but grants are limited to $300 and are not guaranteed to every applicant.

Some students have also been forced to return to abusive households, a situation that is especially dangerous during a pandemic where people are forced to stay inside. The American Psychological Association (APA) recently detailed the ways that decreased financial and social resources can put members of violent households and marginalised populations – like women, LGBTQ communities, and children – at higher risk for abuse during COVID-19 shutdowns. “The things people use in their safety plan are no longer available, which leaves survivors trapped in an escalating cycle of tension, power and control,” psychologist Nadine Kaslow told the APA.

On the West Coast, organisers of the Stanford Student Support fund recognised the disconnect with their school’s handling of campus shutdown. The fund started with a $3000 balance from an on-campus co-op senior Jacob Kuppermann worked at, and was eventually opened up to student and community donations through a GoFundMe page. “Our main motivation in setting up the Student Support Fund was the sudden nature of Stanford’s response to the virus,” says Kuppermann. On March 13, Stanford announced that students had five days to move off-campus, aside from 600 students who had gotten permits to stay, leaving many scrambling to secure alternative housing arrangements or last-minute plans to return home.

Kupperman says money from the fund was disbursed “in the form of no-questions-asked $100 gifts”, to students who described financial need. The fund’s GoFundMe page describes its goal of making up for deficits in Stanford’s financial aid, such as in “food costs until financial aid can provide support, housing costs for students that do not have a home or can not go home, storage costs, internet access”, or any other cost associated with the “sudden change” of campus shutdown. Kupperman also describes Stanford student government’s effort to “organise leftover money that clubs did not use this year into food aid and transportation aid for those in need, disbursing tens-of-thousands more in aid.” Stanford did not return a request for comment. 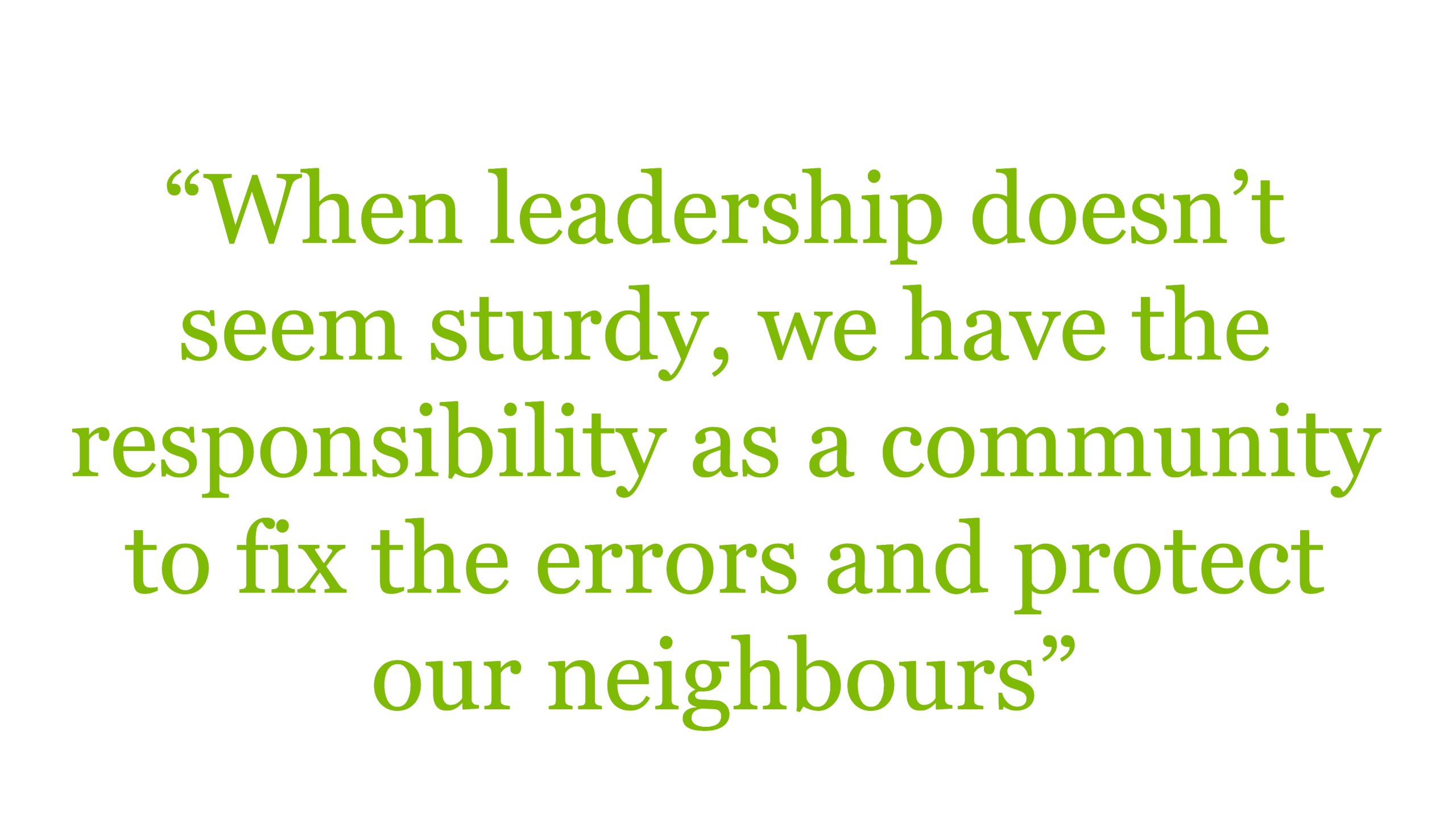 As for the Duke student fund in North Carolina, students created the Venmo account @DukeAid where students and community members could donate directly. Students looking to receive funding filled out a form to request it. The request form is currently down as they wait to accomodate a high volume of requests with more donations. In the meantime, Duke University Provost Sally Kornbluth announced on April 6 that Duke would be accepting applications for the Duke Student Assistance Fund, a COVID-19 emergency relief fund that began with “an initial commitment of $4 million from the University”, as described on the fund’s website. Duke declined a request to comment on whether the school’s fund was informed by the student fund that predated it.

For St. John’s College students on the Annapolis, Maryland campus, things started to change while they were on Spring Break. On March 11, Dean Joseph Macfarland announced to undergraduates through an email that “students will not return to campus prior to March 29, 2020.” On March 18, the COVID-19 situation became more dire, and St. John’s College changed policy. The dean announced that the school would be moving to distance learning for the remainder of the academic year, and that the administration would be “creating a fund to help students in dire financial circumstances” (which they did).

Senior Angelika Alberstadt found creating a mutual aid Excel spreadsheet for her school to be a natural act of fostering community. The spreadsheet was open for students to list and fill needs in categories like food, transport, and even spiritual support. She got the idea from a similar document at Middlebury College, altered it for her school, and posted it “in every Facebook group” she could find. “I actually tagged the Dean on Facebook so that he could see the spreadsheet and forward it to his colleagues, which he did,” says Alberstadt.

Director of Strategic Communications and Marketing at St John’s College Michael O’Conner says it is “wonderful to see students connecting each other with resources despite being so physically far away from each other.” He also references the establishment of the St. John’s Student Emergency Relief Fund, which raised $47,000 as of April 17.

Alberstadt is less interested in criticising her school’s administration than she is in filling in their gaps. She mentions that having “an active role in helping the campus erased [her sense of] powerlessness.”

“I don’t think it was ever the administration’s intention to displace people or strip them of their basic needs, but my thought was that it would inevitably happen,” says Alberstadt. “When leadership doesn’t seem as sturdy, we have the responsibility as a community to fix the errors and protect our neighbours.”

But not everything has a happy ending. There are still students across the country who are living precariously, left jobless, sick, or forced into violent homes. US college students are at an age where we’re not quite able to benefit from government provisions, but are still expected by our schools to keep up with classwork and tuition payments. At my school, yearly expenses can get as high as $78,000, but information about monetary aid for students during COVID-19 has been difficult to acquire. When colleges in the US ask so much of students – financially, emotionally, in terms of labour – you start to wonder when we will begin asking more of them.

Linkedin
RELATED ARTICLES
OTHER ARTICLES
A recent High Court ruling against the right to wild camp in Dartmoor National Park sparked the largest land protest in history – and campaigners say their fight is not over yet.
A new exhibitions brings together the work of photographers who documented the deep unrest of these pivotal decades.
Social prescribing connects people with non-medical support to improve their health and wellbeing – but some experts worry it’s just a stick plaster solution.
Following the release of his debut single, Deyaz talks battling addiction, dealing with his struggles through music, and building a budding music career from his living room.
A new law change is enabling Britain’s donor-conceived children to know the truth about their origins – but campaigners say the fertility industry must do more to protect people.
At his West Bank restaurant, Fadi Kattan established himself as the voice of modern Palestinian cuisine. Now, he’s bringing his innovative, bold flavours to the UK’s capital.