News & Politics / Activism / The US presidential election: how terrified should young people be? 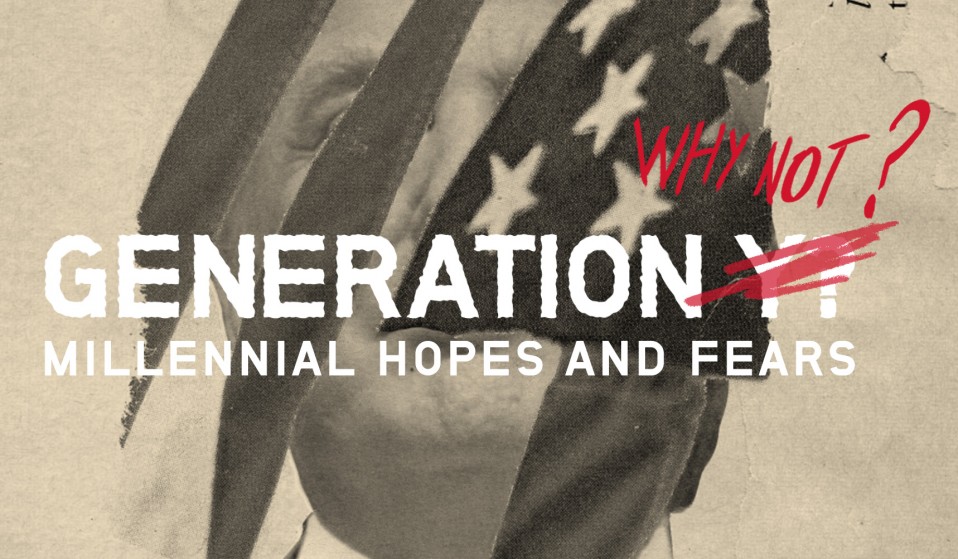 From escalating police brutality and Islamophobic attacks to skyrocketing student debt and a rampant Wall Street, there could be a whole lot of bad to come for young people, whoever wins the US presidential elections. We asked an expert to help us get to the bottom of the madness.

From escalating police brutality and Islamophobic attacks to skyrocketing student debt and a rampant Wall Street, there could be a whole lot of bad to come for young people, whoever wins the US presidential elections. We asked an expert to help us get to the bottom of the madness.

Watching the race to be America’s next president doesn’t inspire much hope for the future. But let’s assume for a minute that Donald J. Trump doesn’t get his fingers anywhere near the nuclear button, we avoid World War Three and there is still a future to think about.

Whoever wins the US presidential election later this year, there could be huge consequences. We’re already staring down environmental collapse, crippling debt and the knowledge there’s little hope of achieving a better or even similar standard of living than our parents. But depending on how November’s vote goes, we could also have to deal with escalating police brutality and Islamophobic attacks, skyrocketing student debt and a rampant Wall Street.

To get to the bottom of what’s really at stake for young people in this election, we spoke to Inderjeet Parmar, Professor of International Politics and chair of the Obama Research Network at City University, London.

How much have issues that affect young people been part of this election campaign?
I think probably much more than in previous years. I don’t remember a campaign which actually focussed on young people to this extent.

Millennials are such a large demographic cohort and they’re growing in size. Their economic significance is increasing as America gets older so young people’s issues are going to be more and more important. Demographics are very powerful as activators.

Young people have different ideas, views and attitudes. Millennials don’t care about the Cold War or anti-communism, for example. They have no vested interests. They’re looking to the future. Roadblocks to their future seem to be increasing, such as the increasing costs of healthcare. So there’s growing pressure for change. As a result, their discontents do tend to become political issues.

What are the biggest issues affecting young people that have been discussed so far?
There are a couple of big areas. One is students and the indebtedness of graduates. Students are coming out of college paying very high tuition fees and having hundreds of thousands of dollars of debt. With graduate employment and salary levels not as high as they used to be, obviously it means its very hard to get a start in life, get on to the housing ladder and so on. That’s been a big issue for Sanders, in particular.

The second area is police violence and gun crime, which Hillary Clinton has pushed on to the agenda. She’s been talking about the high rates of police killings in the last few years and how that disproportionately affects African American youth. Most recently, she has argued that because Trump is now being endorsed by the National Rifle Association, there’s a threat that he’ll call for an end to gun-free zones in schools and that this is a greater threat to children and young people.

Is Trump as much of a threat to minorities as people make out?
Absolutely. Even under Obama we’ve arrived at a place where Harvard medics argue that police killings of black people should be declared an epidemic. Under Trump I’m sure that trend would get much worse.

Trump’s campaign has already generated more hate crime across the board. A survey by the Southern Poverty Law Center, for example, showed that since late 2015 there’s been a large increase in police apprehending people committing hate crimes. Trump has encouraged and emboldened some of the most bigoted elements in American society to come and act out more of the anti-minority and anti-Islamic sentiments that he’s associated with. That’s just his campaign. If he were to win the White House it would send a huge message.

In 2008 after Obama won the election, right-wing hate groups have swelled. If Trump were to win, those forces which have been pent up for the last eight years would be released and that would be very dangerous.

So, let’s say I’m a Muslim woman living in Dearborn, Michigan – or one of the other big Middle Eastern communities in the US – to what extent should I be worried?
Just imagine! Trump is misogynist and Islamophobic. The violence which comes to Muslim communities, which has tripled in the last year alone, from bombs to name-calling in the street and violence against mosques, will be even more dangerous. Those people who are vulnerable will be even more vulnerable. Trump has benefitted enormously from the Paris and Brussels atrocities. If there were to be another terrorist attack for example, it would just be even more vitriolic and poisonous.

How do you rate Hillary Clinton’s offering to minorities, particularly young people?
Her message is one of hope and change. There’s a lot of loyalty to the Clintons because African American living standards went up so much in the ’90s. But at the same time African American incarceration rates went up astronomically as well. There’s a promise of good things, and more opportunities but a lot of it is rhetorical. What Hillary Clinton can deliver depends on her ability to go beyond Wall Street’s priorities, and that’s where I have the biggest doubts about her agenda.

If Trump won, would he take on Wall Street?
He’s a corporate billionaire himself so he’s obviously not an anti-corporate overall, but he’s been sending the message about globalisation and free trade. He’s been saying that his base has suffered from globalisation, NAFTA and other free trade agreements. So he’s saying he would do something, but what he would actually do he’s never specified. It’s easy to say this is wrong, but what is he going to do to take on those forces? Those forces are very embedded in the political system.

Could any of the candidates really take on Wall Street? What happens if nobody does?
If there isn’t a new president who has an agenda for change, which helps to deal with some of the big structural issues, then the big problems that affect young people are going to get worse. What you currently have is a kind of crisis in the political system and that’s partly brought about by the fact that the corporations, particularly the banks and the financial institutions, have such great power. And they are backers of globalisation. That means very little protection for people within the United States, and in other nations as well, from competition from abroad. The consequence of that is that if there’s free migration as well as an even greater outsourcing of jobs, that then has a big squeeze effect on the economic opportunities young people have.

Where does Bernie fit into all this? Would you say he’s out of the running?
Bernie is immensely popular with young people, in fact most surveys show he’s picked up something like 85% of the vote from people under 30. But it’s difficult to call. Even without superdelegates, Clinton is a long way ahead. But there are big states still to come, like California. What Sanders can do is have an effect on who might be the vice-presidential running-mate. If Sanders were able to get somebody like Elizabeth Warren on the ticket then that could be quite a big deal. She’s on his wavelength and she could get the Sanders movement behind Hillary Clinton.

So, young people’s best, realistic hope might be an Elizabeth Warren vice-presidency at this stage?
Yeah, I would think so. She has championed youth causes before and she is well to the left of the democratic party. She’s been very effective against Trump on Twitter and elsewhere. Some people argue she’s making a play for an all-woman ticket to cash in on the misogyny of Trump. She would be a pretty assertive and strong vice president, who could galvanise support around Sanders’ agenda, like inequality, decreasing levels of income for poorer people, healthcare and student debt. She could be a powerful voice.

Linkedin
RELATED ARTICLES
OTHER ARTICLES
Taking us through one of the most dynamic years in recent history, Laylah Amatullah Barrayn new photo book contains tender yet confrontational portraits.
Yohon Tatum, aka Legendary Father of the House of Tisci, reflects on nurturing a new generation of talent.
After blocking the Scottish government’s gender recognition reform bill, Westminster is now devising further changes to the law to make it harder for trans people to self-identify.
David 'Dee' Delgado’s photo project is about honouring and uplifting the city of his youth, and a world rapidly disappearing under the relentless onslaught of gentrification.
From snake handlers to mardi-gras revellers, Tom “TBow” Bowden’s photos provide a snapshot of the wonderful and weird people who make up America.
Campaigners reflect on what the supreme court’s decision to allow buffer zones in NI means for the future of reproductive rights in the UK.