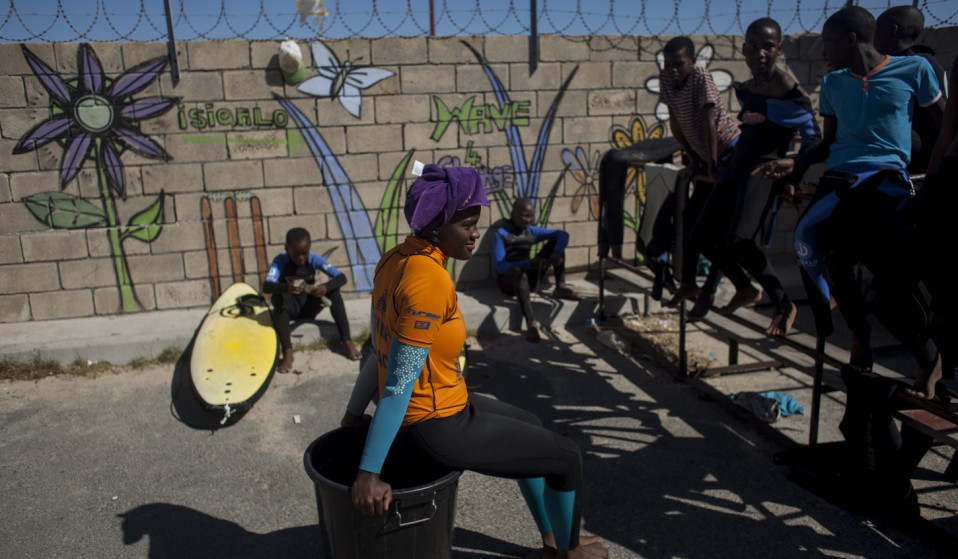 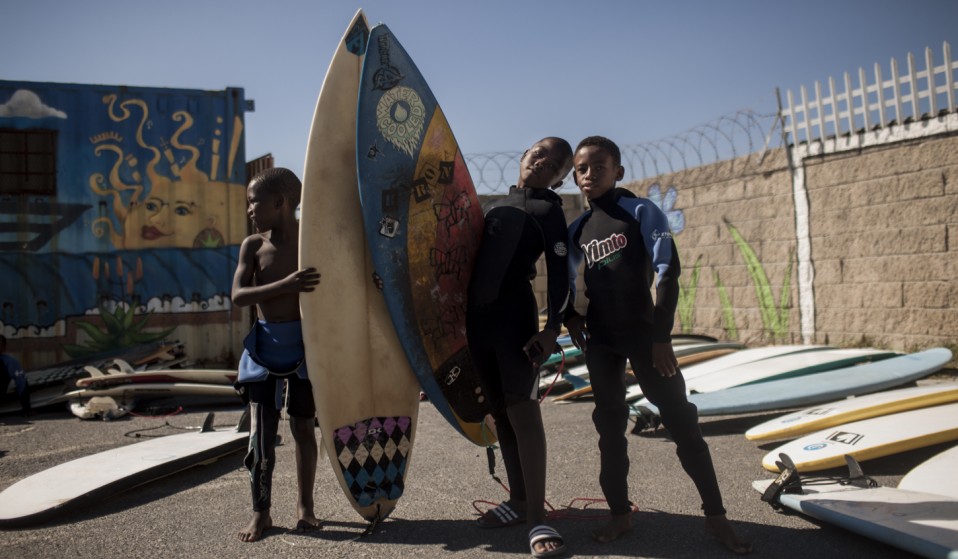 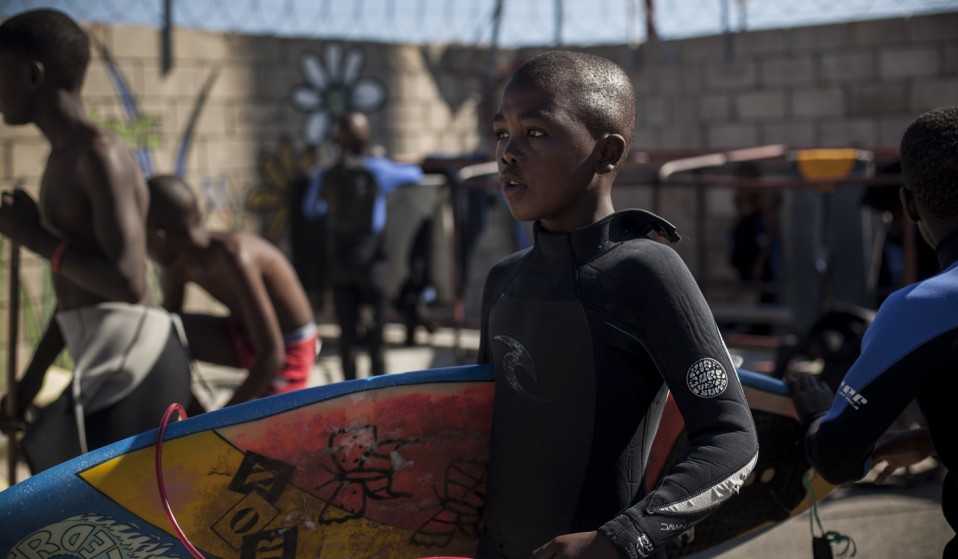 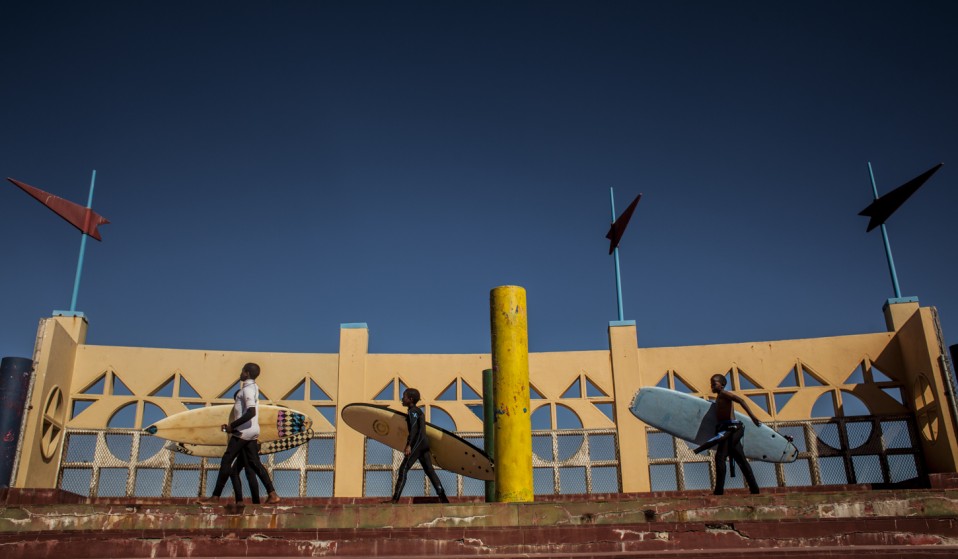 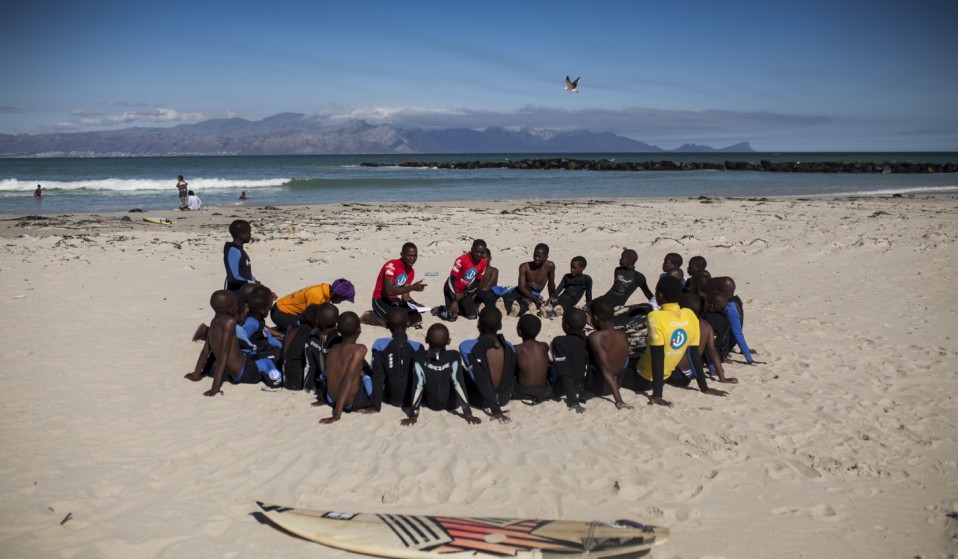 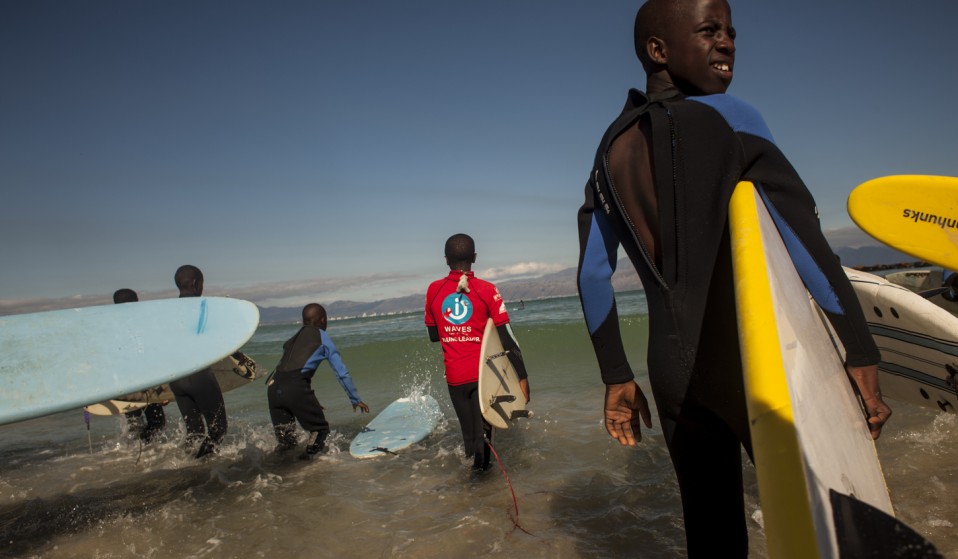 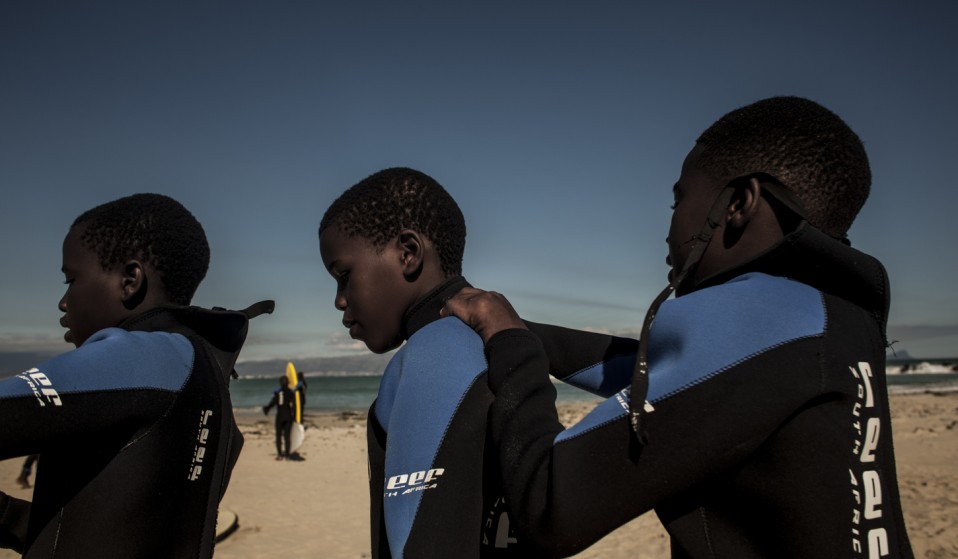 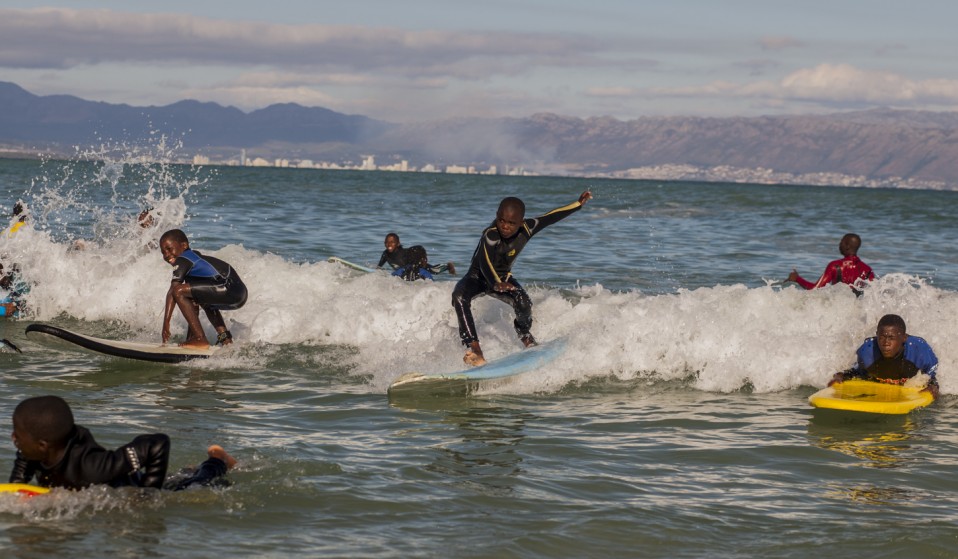 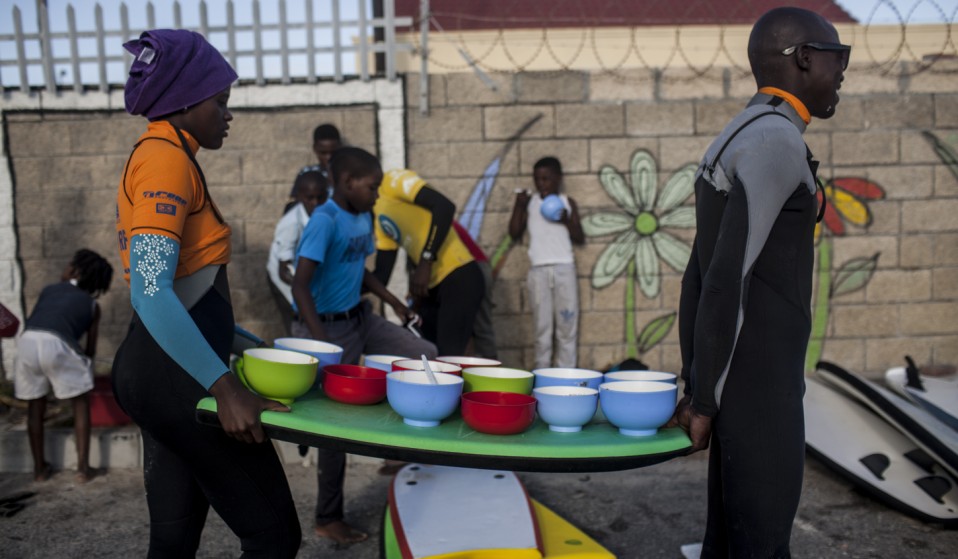 Thanks to DIY education project Waves For Change the young people of Khayelitsha are getting a chance to experience the transferable skills of surfing.

Thanks to DIY education project Waves For Change the young people of Khayelitsha are getting a chance to experience the transferable skills of surfing.

Most visitors who land at Cape Town airport will walk out into the blinding sunlight and do one of two things: drive into the city towards the white sands of Camps Bay; or head out to the rolling winelands of Somerset West. Few, if any, will swing a left along the way, choosing instead to speed past the patchwork of cobbled-together shacks and towards something a little more picturesque. But more fool them. Because it’s here, in the bustle of township life, that a nascent surf scene is springing up and taking root.

“I didn’t know surfing was a sport,” says Lwandile Mntanwa, standing proudly at the water’s edge in a bright red rash vest, the words ‘Young Leader’ scrawled across his back. “I’d seen it on TV but I didn’t know it could feel like a team. I used to come to the beach but only on hot days. Now I come winter, summer, after school, all Saturday. This is my whole life.”

At eighteen, Lwandile towers over the pint-sized groms lugging man-sized surfboards over ankle-deep foam. But as they gather in a circle for today’s lesson, he closes the gap by draping one arm over the shoulder of the shyest-looking kid.

“When you first come here you stand aside from other people. But as Young Leaders, we will ask you, ‘What’s wrong today?’” says Lwandile. “I’m happy to help the other kids because I don’t want them to become like I was, to smoke drugs. When you’re at the beach, you don’t think of other things – you only think of the waves and learning new skills. Your mind would blow if you think about the problems at home.”

Lwandile lives ten minutes from this tiny cove, in the informal settlement of Khayelitsha, but it took more than a little coaxing to get him in the water. He’d heard about Waves For Change – how kids were surfing right here in his hometown – so he came to check it out, but from a cautious distance.
“We waited at the top of the beach but the coaches shouted, ‘Come down, come ride!’”

Encouraged by the guys in yellow vests – a team of thirteen locals who learned to surf at Waves For Change and now, as leaders of the project and with training in child and youth care work, use surfing to teach vulnerable youth about their rights in the community and help them deal with the many social and economic challenges that stand between them and their futures – Lwandile got involved. Now he spends his time encouraging younger kids to do the same.

“Surfing builds your confidence because it’s not easy,” says Lwandile. “I know I can ride big waves because I keep them in my memory. In the lessons we talk about believing in yourself, respecting your elders, your responsibilities and rights. Once you understand your right to surf you can ask yourself, ‘What’s my right in the community?’ My right in the community is to go to school. And my responsibility is to study. We teach kids their right to things – not only in the water.”

Waves For Change first sprang to life in September 2011 in Masiphumelele, another Cape township that had no history of surfing. But starting from scratch has never been a daunting task for founder Tim Conibear. “If something doesn’t exist it doesn’t mean it can’t be done,” says Tim. “It just means you need to do it yourself, you need to create the template. The idea of township surfing isn’t new by any means but the idea of locally owned township surf culture, that sustains itself, that governs itself, that is a force for good as opposed to just promoting competitive excellence – and that builds an educational culture run by the community itself – that never really existed. There were loads of voluntourism projects that parachute in expertise from outside but the idea of using surfing to allow communities to empower themselves didn’t really happen. So you had to make it happen.”

Inspired by other grassroots education projects like Skateistan that use high-risk sports to engage hard-to-reach youth, Tim set out to make Waves For Change the kind of peer-driven development model he intuitively knew it could be: “If it’s owned by the community then the natural development of the programme is responsive to the community’s needs.”

The project started with a focus on HIV – “but looking at the virus through a social lens,” explains Tim, “at all the social behaviours that drove kids to get infected. Risky sexual behaviour, messed-up friendships, damaged home environments. It was about building the resilience of kids to make the right choices.” With the community at the helm, the programme evolved and became long-term off its own volition.

“After two courses in Masi, fifty of the sixty kids refused to leave,” laughs Tim. “We thought, ‘Okay, well this is kind of bizarre.” Their three-month programme was informed by other sport development projects, all of which reported high levels of dropouts. “So it was weird having ninety per cent of the kids refusing to leave. We figured there must be something different in surfing. We did research and found that the kids who stayed came from less stable backgrounds – broken homes, dropping out of school, involved in drugs and gangs. We asked them, ‘Why did you come surfing?’ And they said it looked cool, it looked risky.”

Today, Waves For Change in Masi is a self-governed entity, led by local surfer Apish Tshetsha, one of the young guys who refused to leave and who is now a team rider for Reef South Africa. Like the Khayelitsha drop-in centre, which opened in July 2012, they combine surfing with a child protection programme that manifests as life skills education, free hot meals and social workers who liaise with families and schools to support the most vulnerable. Most kids come every day without fail. “Because its owned by the community, we have that long-term engagement,” says Tim. “The kids come through and become coaches, so there’s embedded culture there that will always be there. If you just parachute something in for the short term and don’t let the community take ownership, it will be rejected and it will fail.”

Tim’s DIY principles are more radical than most. Far from embedding his ego into his own passion project, he aims to extricate himself completely. “Tom Hewitt [founder of Surfers Not Street Children and a big influence on Tim] always said, ‘If you start something like this you should have a goal of hand-over after five years.’ And I agree,” says Tim. “You build the expertise in the community and then hand it on. That’s what development really is. When you build yourself in, you also have to build yourself an exit. Because otherwise you just build something around yourself and it falls apart when you leave. Now we want to make it more self-funding and train local people to make the money themselves as life guards, surf coaches, drivers – all super-attainable skills. If we can generate even a third of our annual income ourselves it will give us even more control. Grants are so important but they don’t give you that piece of mind that you’ll be here in twenty years time.”

At the beach in Khayelitsha, female surf coach Khanyisa Mnqibisa closes the lesson and the kids erupt in a booty-shaking song. “It’s free surf time,” says Lwandile, throwing a shaka sign. “And Tim says that the waves will be cooking if you just keep surfing. Our slogan is ‘Bananas: Protect and Respect and Communicate.’ That’s the best lesson I’ve ever learnt. If you communicate with people, not only here but in the street, you will learn how to deal with things like drugs. Respect people and they will respect you – if it’s a father of another person, it is your father too. The kids know when they see me on the street they can call me. I’m their leader not only on the beach but in the community, and it feels good. Now I want to be a coach. Everyone looks up to the coaches. And coaches go places. They see other beaches. I’m looking forward to seeing new places, too.”

Find out more at the Waves For Change website.

Linkedin
RELATED ARTICLES
OTHER ARTICLES
Photographer Graeme Williams creates a thread between the present and past in Mandela's South Africa.
Considering the challenge young South Africans now face – following in the footsteps of a generation of freedom fighters.
HUCK takes a journey across the creative plains of new South Africa and finds out how the next generation see their future.