News & Politics / Activism / Why barristers are striking for justice 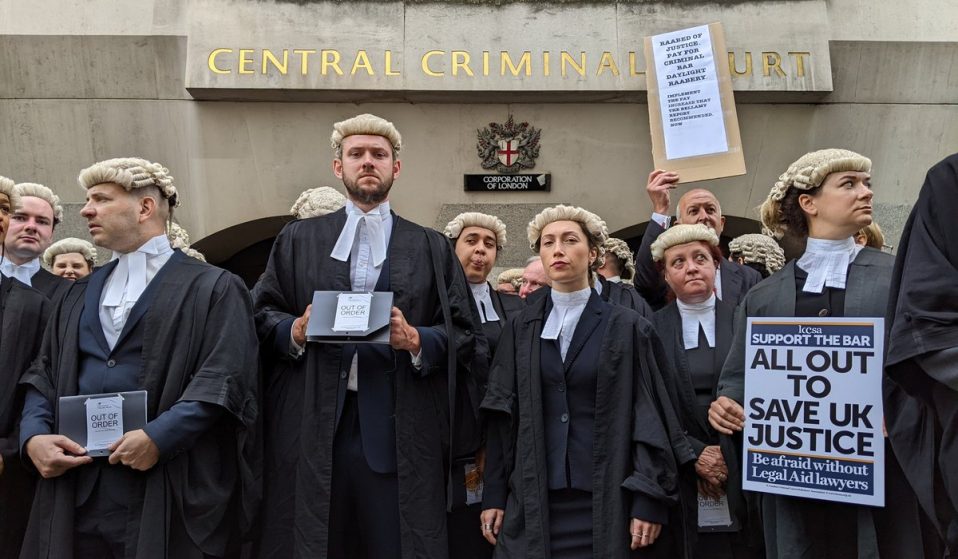 As the Criminal Bar Association enters its fifth week of action, criminal barrister Russel Fraser explains why the legal professionals have walked out and how action is likely to escalate.

As the Criminal Bar Association enters its fifth week of action, criminal barrister Russel Fraser explains why the legal professionals have walked out and how action is likely to escalate.

The criminal justice system relies heavily on the goodwill of those working in it – lawyers, court staff, probation officers, judges – to keep the show on the crater-ridden road. For barristers, that goodwill has finally been exhausted as we enter our fifth week of walkouts. The reasons for the discontent are many and manifold: a decade of austerity crippling the criminal justice system through court closures (244 since 2010); mounting cases; vanishing numbers of lawyers and judges; and a level of renumeration which has plummeted 28 per cent in real terms since 2006.

The backlog of cases – huge before the pandemic – now stands at 58,000 and the once strange sight of barristers in wigs and gowns, placards aloft, protesting outside courts has become an unexpected feature of this ‘Hot Strike Summer’. The Ministry of Justice continues to pretend all is well and before the Parliamentary recess on 21 July claimed in one tweet it had achieved much to “support victims, reduce reoffending, support the justice system & protect the public”. None of this is true while it refuses to engage in the realities of this dispute.

When the delayed review arrived in late 2021 the key recommendations included payment to barristers for written work, a second main payment for a particular type of case known as ‘Section 28’, the establishment of an independent pay review body, and an immediate injection of at least 15 per cent into the payment system known as the ‘Advocates’ Graduated Fee Scheme’ (AGFS). The government’s response in March this year offered little reassurance, and so the Criminal Bar Association (CBA) balloted its membership on taking action.

Representatives of the CBA met with the minister responsible for legal aid on 12 July offering a route through the impasse. The government declined to engage, instead, committing to increasing fees on cases which begin life after 30th September 2022. Of course, 15 per cent sounds like a significant increase and when compared with other public sector pay demands looks even larger. The reality however, is quite different.

Further, we note that Government continues to refuse to apply the recommended 15% increase to current cases for work carried out from the date when the statutory instrument takes effect.

First, the effect is that additional funding will not reach barristers until late 2023 or into 2024 while existing cases are concluded. The figure is a percentage of the legal aid spend in a previous year and so is not 15 per cent on its own terms in 2022, let alone 2023 or 2o24. Moreover, most criminal barristers are self-employed, meaning usually over a quarter of our income goes to the professional costs of simply doing the job, be it for offices, staffing, court dress, insurance, training. All before considering we do not get holiday or sick pay, nor do we have workplace pensions with contributions from an employer. The costs of doing the job itself are significant; saying nothing of qualifying in the first place.

Many aspiring barristers amass significant student debt in the hope of getting one of the diminishing number of ‘pupillages’ available each year (essentially a training position). When I began pupillage in 2012 I was guaranteed an income of £12,000 in my first year which was typical at the time. Ten years later that guaranteed minimum remains £12,000. And qualification doesn’t suddenly see an exponential rise in income. Most are lucky to reach £20,000 within the first three years and it can take closer to five years to establish oneself properly. And with working weeks often exceed 60 hours it is no surprise then that many choose to leave the profession rather than slog it out. Moreover for those without independent or family financial support the hurdles are even greater. The CBA estimates that 40 per cent of juniors left the criminal bar during the pandemic.

The CBA has repeatedly urged the Justice Secretary, Dominic Raab, to meet with its representatives in order to resolve the dispute. However, since last October he has declined repeatedly to engage, preferring instead to maintain the fiction that his Ministry is serving the public as it should. On Friday 29 July the minister responsible for legal aid, Sarah Dines, wrote to the CBA confirming the Government’s position was not going to change and ignoring Bellamy’s wider recommendations. The letter has already been met with a mixture of derision and dismay by colleagues.

This morning there was a virtual mass meeting of members to discuss our next steps in response. At present the action takes the form of alternating weeks of action. The mood is now that we will move to a complete shutdown, escalating our action.

Throughout this dispute, the government has failed to grasp the anger, frustration and sadness colleagues feel about the state of a system they care about deeply. No barrister is comfortable at leaving often vulnerable people without their expertise. It is a mark of the depth of the crisis this government has created. Court staff too are currently being balloted on strike action because of the failing digital court system. Indeed, the Hot Strike Summer shows no signs of cooling.

Russell Fraser is a barrister at Garden Court chambers. He is an executive committee member and former chair of the Haldane Society of Socialist Lawyers. Follow him on Twitter.

Linkedin
OTHER ARTICLES
With the virus now a global health emergency, we must take steps to fight misinformation and demand a swift UK-wide vaccine roll out, writes Phil Samba.
Protestors gathered outside Downing Street following the latest atrocities committed by Israel against Palestinians living in the besieged strip.
After rewriting the indie rulebook with her devastating songs about romantic longing, the singer-songwriter is now imagining a future in which the artist is no longer a product.
Students are being left to languish in unsafe housing, in some cases leading to serious health complications.
Yesterday, rail workers came together to protest poor pay, working conditions and job cuts in their latest round of strikes.
A new series of photos by Johny Pitts shines a light on communities and subcultures that have all too often been overlooked.