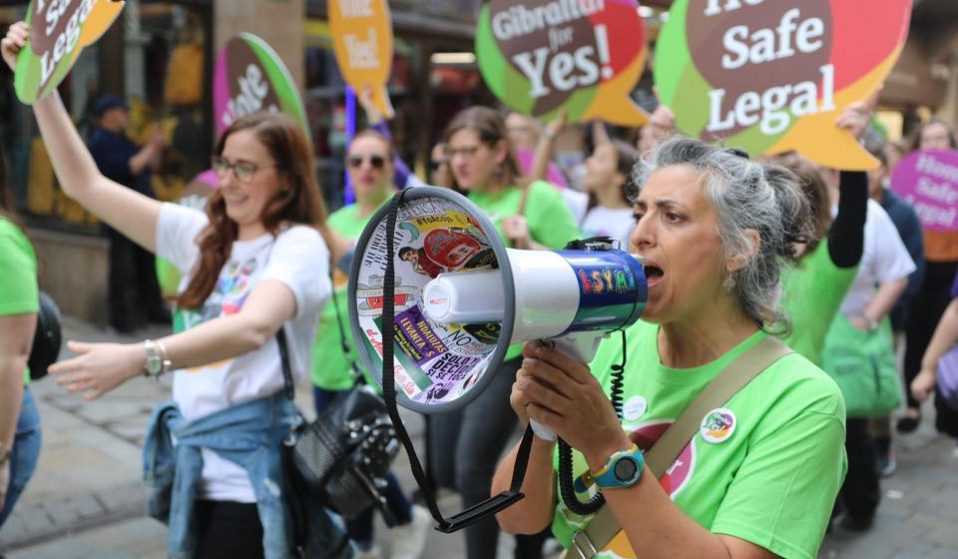 The UK territory is set to become the third country ever to hold a public vote on its abortion laws – and it’s been a long time coming.

The UK territory is set to become the third country ever to hold a public vote on its abortion laws – and it’s been a long time coming.

Many young women living in the UK today grow up believing that, if they need to have an abortion, they can. But few know that, despite the procedure being legal throughout the UK, there’s a British territory that has Europe’s harshest abortion laws.

In Gibraltar, where thousands of women of reproductive age live, those seeking abortions are forced to cross the border into Spain, pay for a flight to the UK, or face life imprisonment.

But this may all change soon, as Gibraltar hopes to become the third country ever to hold a public vote on its abortion laws.

The two-mile-wide British overseas territory is typified by the Rock of Gibraltar; a huge, 426 metre-high limestone point protruding from the land from which the region takes its name. Though it’s little more than an hour’s drive from the Costa Del Sol in Spain, many of its 34,000 residents see it as a small slice of England.

The rights disparity between Gibraltar and the rest of Britain has been a pressure point for young people who feel an affinity to their UK-based counterparts. The British government is even implementing legislation for abortion access at the end of the month in Northern Ireland, where women and doctors involved in abortions have historically faced life jail sentences.

“Women are being controlled by an outdated law,” says Sadie Lucas, a 19-year-old student and abortion rights campaigner from Gibraltar. “They should be allowed the freedom to do what they feel is right for themselves and their body, especially in the comfort of their own country, without having to feel like a criminal or outcast.” 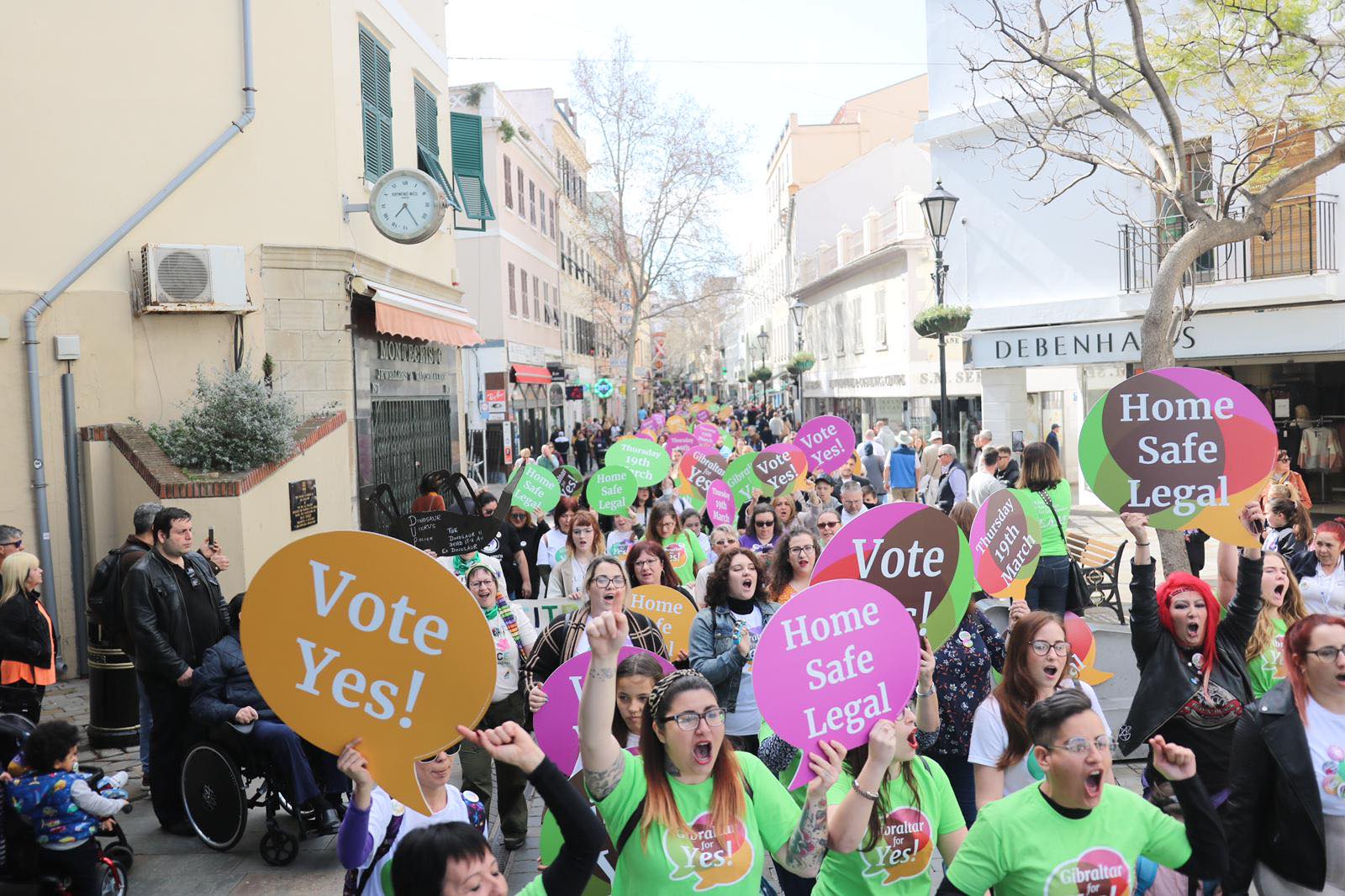 The original vote, which was set for March 19th, has been pushed back due to Coronavirus fears. Although a new date has yet to be confirmed, campaigners on either side of the abortion debate have still been mobilising to sway voters, transforming the Rock into a reproductive rights battleground.

It’s “all systems go”, says Nicole Banda, the spokesperson for Gibraltar for Yes, a coalition of activist groups that make up the official ‘Yes’ campaign pushing for voters to approve of legal abortion in the historic referendum. The activists have been busy hosting rallies in the territory’s main square, holding talks on abortion misinformation and getting the pro-choice message out on social media.

“With a population of 34,000, Facebook is monumental,” says Banda. “You get your message out on social media as though you were knocking on people’s doors.” The ‘Yes’ campaign has also handed the mic to local heroes, such as Jordan Perez, the Gibraltar football team’s former goalkeeper, who said “a vote for ‘Yes’ is the only ‘pro-women’ vote”.

But not everybody is pushing for the right to abortion. The Gibraltar Pro-Life Movement, the official ‘No’ campaign, is pushing for the strict law to remain intact on the grounds that foetuses should be protected. However, laws that force women to continue pregnancies against their will directly contravene human rights, says the UK-based Family Planning Association.

The backlash from anti-abortion activists is “getting worse by the day”, says Banda. They’ve been sharing explicit photos of foetal baby body parts as well as outright misleading materials that falsely claim the new law will mean ‘abortion on demand’. (Huck reached out to the Gibraltar Pro-Life Movement for comment but did not receive a response.)

Members of the pro-life side also say some of the language around the debate has been “toxic” but amplify the falsehood that abortion “up to nine months” will be allowed if the law goes through. The law being voted on in Gibraltar would in fact only legislate for abortion up to 12 weeks’ pregnancy. 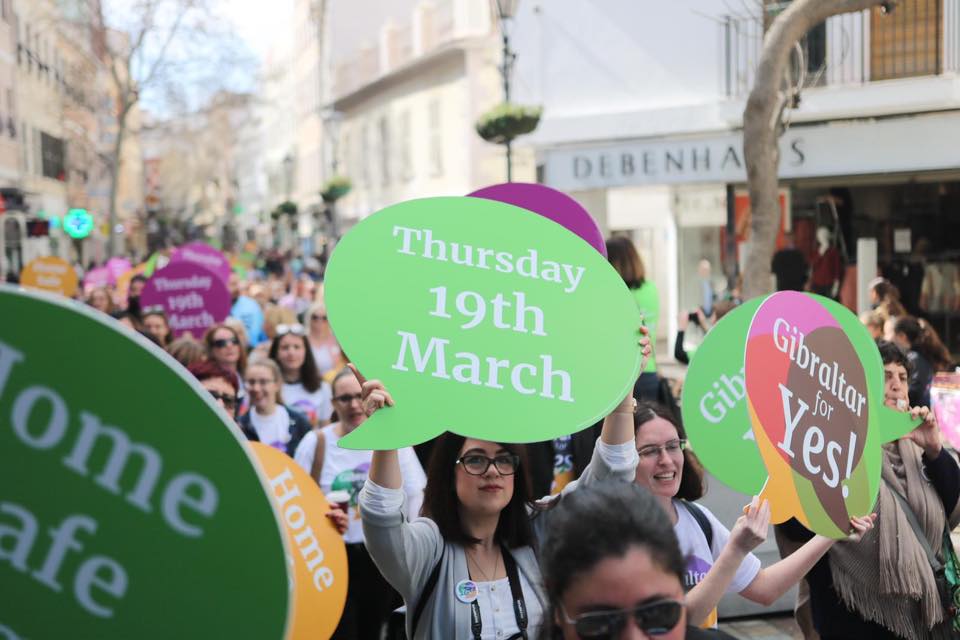 The pro-life position equates to “turning a blind eye and looking the other way”, says Banda. Like in other countries with abortion restrictions, the ban hasn’t stopped women in Gibraltar seeking terminations elsewhere. Most women either go into Spain or take a flight to the UK.

But outsourcing abortions jeopardises women’s access to vital services and ultimately their health. “You have women in Gibraltar who are too worried to go to the GP in case it lands them in hot water,” says Banda.

The referendum will ask voters if they agree with the Crimes (Amendment) Act 2019, a law passed by Gibraltar’s Parliament to allow abortion in limited circumstances. It’s more or less a “copy and paste” of UK legislation, says Banda. “The only difference will be the UK the cut off is up to 24 weeks, whereas here it would be 12 weeks.”

Women would need two health practitioners registered with the Gibraltar Health Authority (GHA) to certify the abortion and the abortions themselves have to be carried out in registered GHA locations. The government would be tightly regulating it, so no private clinics would carry out terminations.

But will Gibraltar follow in the footsteps of the Republic of Ireland and Portugal and reinforce women’s rights at the ballot box?

For abortion rights activists, things are looking good. Gibraltar’s Chief Minister said he’s in favour of modernising the abortion law and an opinion poll by the country’s national broadcaster predicts 70 per cent of people will vote ‘Yes’.

Whatever happens, the campaign has already been “eye-opening” with people now much more aware women are having abortions, says Banda. “[Before], most people thought that abortion just did not happen in Gibraltar.”

Lucas hopes that with a ‘Yes’ vote, abortion will stop being taboo: “Now, living in the 21st century, we need to wake up and realise what is happening around us. We need to be able to talk about it, be comfortable with our own choices, and not have to live in fear.”

Linkedin
RELATED ARTICLES
OTHER ARTICLES
A new exhibitions brings together the work of photographers who documented the deep unrest of these pivotal decades.
After building his reputation covering the US civil rights movement in the 1960s, the photographer went on to produce some of the most enduring images of the past century.
After blocking the Scottish government’s gender recognition reform bill, Westminster is now devising further changes to the law to make it harder for trans people to self-identify.
AI companies that develop image-generators using copyrighted artwork from the internet are coming under fire from artists who say that it amounts to theft.
At his West Bank restaurant, Fadi Kattan established himself as the voice of modern Palestinian cuisine. Now, he’s bringing his innovative, bold flavours to the UK’s capital.
Social prescribing connects people with non-medical support to improve their health and wellbeing – but some experts worry it’s just a stick plaster solution.