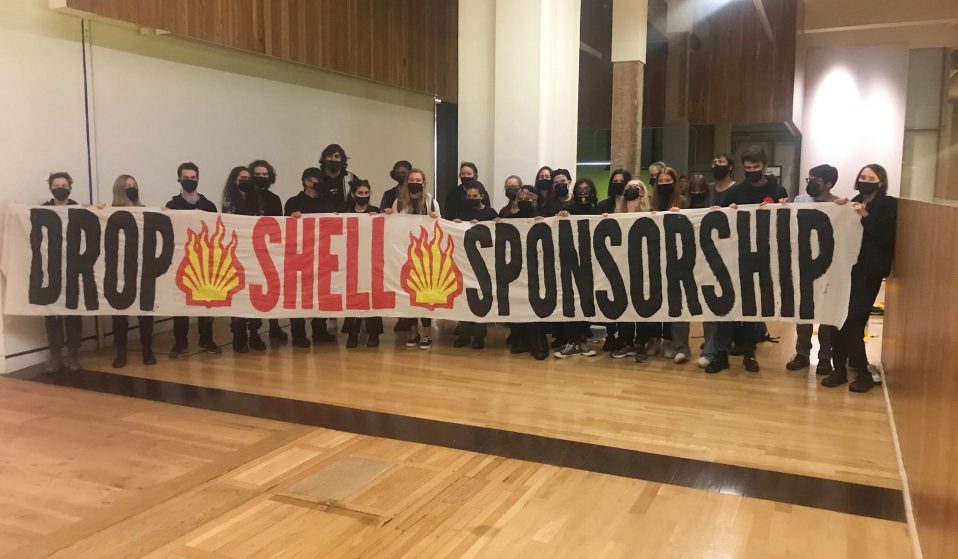 Izzy Warren, a 17-year-old campaigner with UK Student Climate Network, explains why she took part in a protest against the museum’s sponsorship deals with fossil fuel companies.

On the night of 26 October, I occupied the Science Museum in London to challenge its ongoing acceptance of fossil fuel corporate sponsorship and its resulting complicity in both climate injustices and climate change. Joining me were 30 others: scientists, campaigners and young people from the London branch of the UK Student Climate Network (UKSCN), a radical youth-led organisation mobilising for climate justice. The museum has taken sponsorship from BP, Shell and Equinor, most recently announcing that its new ‘green energy’ gallery will be sponsored by coal giant Adani, whose proposed new mine in Australia will not only release many tonnes of carbon dioxide but also damage and displace indigenous people and their land. Ironically, the new gallery will be called ‘Green Revolution’.

Our own response to this ‘revolution’ was to hold our own. We entered the museum in the late afternoon and as evening drew on, held a simultaneous vigils inside and outside the museum, live-streaming between the two and sharing testimonies from people around the world affected by the companies that give their money to the Science Museum.

These profits stem from the pollution and human rights abuses in the Niger Delta (Shell), West Papua (BP) and many others. We focused on those directly affected by these companies, and also the wider communities suffering the climatic effects of climate change. Inside the museum, we talked to visitors about why we were there. Most of them were warm and supportive, giving us the energy to keep up our vigil. A teacher told us that she would make sure her students knew about our action and why it was important to stand up to those who are causing dangerous climate change.

BREAKING: activists from @ukscn_london are currently holding a vigil inside the @sciencemuseum in protest against the shell sponsorship of an exhibition. two police officers are in attendance. Our politics editor @bencsmoke is reporting from the scene. pic.twitter.com/aGEICuFeEt

Since our first occupation in June, the Science Museum has been feeling the heat. Our actions are making a difference. The museum removed placards made by youth climate striker included in a fossil fuel-sponsored exhibition without the donors being informed of the sponsorship, after a complaint from us at UKSCN. Perhaps most importantly, scientist Chris Rapley resigned from the board because, in his own words, “I disagree with the ongoing policy of accepting sponsorship from oil and gas companies.”

We came again to occupy the Science Museum; we won’t let them bully us into silence. Our work is to fight with the communities most deeply affected by fossil fuel extraction and climate breakdown. Our vigils change the museum’s narrative from collaboration with fossil companies to climate justice. Since Shell’s sponsorship of the Our Future Planet exhibition was announced in April, there’s been a furious response from climate activists, scientists and the public and it was revealed that the museum had also signed a ‘gagging clause’ with Shell as part of the sponsorship agreement.  They may have signed a gagging clause over their sponsorship ties, but we didn’t.

Why is it so important to me that companies like Shell and Adani are removed from funding the Science Museum? Firstly, because these companies aren’t charities – for them, this sponsorship is a business transaction where they buy the social licence to operate, and the ability to manipulate climate education. This education is severely lacking in mainstream education in the UK so these spaces are even more important. As a kid, the Science Museum was where I first learned about the ways the humans cause environmental damage. This place is London’s most important institution for the public understanding of science and its continued acceptance of sponsorship by fossil fuel companies not only endangers communities around the world but also compromises public understanding of climate science.

I want other young people to have access to information about how the earth is being changed by burning fossil fuels, and that information has to be accurate, honest and scientifically valid. As Rapley’s resignation shows, the museum is losing the faith of scientists and losing, in turn, its claim to be a legitimate centre for scientific education. From our recent actions, we can see that public support for our campaign is growing and more and more visitors to the museum are sympathetic. Indeed, the museum has a growing PR problem as it persists in associating itself so closely with fossil fuel money.

For our vigil that night, we had prepared shells made of origami paper to hang in the galleries. We decided to write inside the name of the person we were doing our protest for. My journey to climate activism started in the Science Museum, and so I dedicated my shell to my ten-year-old self, the person began her journey to understanding why we are in this mess, and learning what she could do to stand up against the injustices of climate change. The Science Museum hears her voice now, and it is up to them to do the right thing.

To mark COP26, Huck is running a climate takeover. Keep an eye on Huck’s live coverage of COP on our Twitter and Instagram.

Linkedin
RELATED ARTICLES
OTHER ARTICLES
The Egyptian government are continuing the repressive mistreatment of environmental campaigners.
The campaigning charity are on a mission to increase inclusion, participation and representation of Black people in trail running.
We catch up with the singer in her London studio to connect the dots between music, painting and her relationship with the city.
Whether it was seacoalers in Northumberland or the miners’ strike, the photographer was always fully immersed in the story he sought to capture.
Following the release of their third album, the duo talk collaboration, family and connecting with the dead.
After being subject to racism growing up, Kavi Pujara’s photo series allowed him to reconnect with and reimagine his hometown.