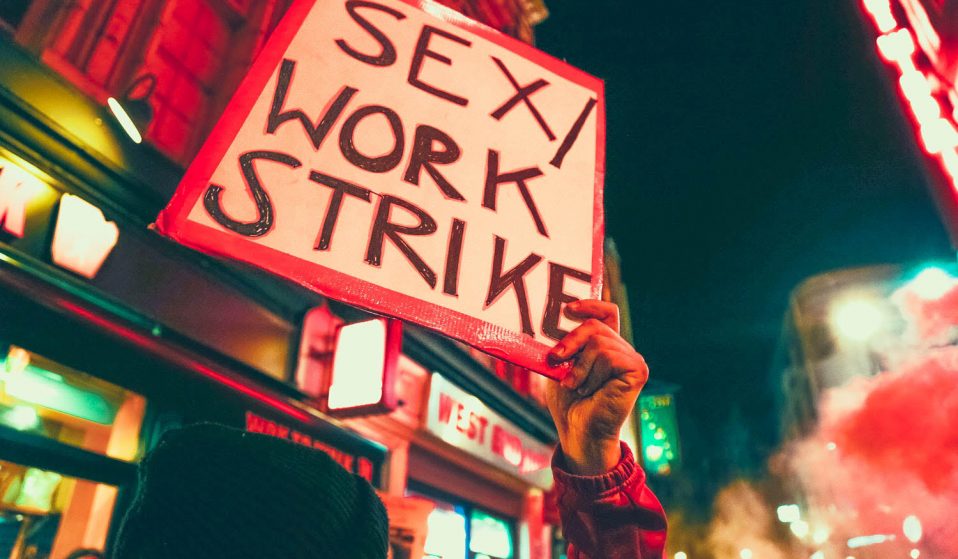 London will get a striptease as part of a ‘disruptive’ global protest against unfair and unpaid labour which will see thousands of women walk out of work.

London will get a striptease as part of a ‘disruptive’ global protest against unfair and unpaid labour which will see thousands of women walk out of work.

Most Londoners will be in the pub come sundown on Friday. But Soho’s strippers have a different evening planned.

From 5pm on International Women’s Day (March 8), they will rally en masse in the centre of the capital – at the Bank of England, Leicester Square and beyond – in a militant, party-style protest supporting both the decriminalisation of sex work and labour rights for all women.

The rally, which will coincide with sister protests in Cardiff, Liverpool, Leeds, Brighton, Edinburgh and Bristol, will close with four strippers on strike dancing defiantly by a London landmark to demand an end to unfair working conditions. It’s part of the third global Women’s Strike protest against reproductive, or “feminised”, labour that is essential but often unseen and undervalued, such as cooking, cleaning and caring. Thousands of women and feminist allies across 50 countries will put down their pens, close their laptops and walk out of work, regardless of whether they get paid or not.

“Women around the world will be causing disruption and taking to the streets to show how powerful they can be,” says Louise, a 34-year-old stripper and one of the organisers of the London protest, which will have speakers throughout and finish with an after-party in Dalston. “[The strike is an opportunity] for us to reclaim our voices.”

Activists argue that government policies fail to take into account their experiences. They say the lack of consideration of sex work as a legitimate job and the conflation of consensual sex work with sex-trafficking leads to them being treated as either criminals or victims, but never in-between.

Currently, there are around 80,000 sex workers in the UK, 70 per cent of whom are single mothers. One in three strippers are students paying for their education. “Many strippers are mothers, studying degrees or starting businesses,” says Louise, who works one to five times per week in strip clubs around the country, including in Bristol and Birmingham. “A lot of women need flexibility and control over their work hours to fit in with the demands of life.”

Strippers and sex workers around the country are pushing for labour unions – worker-led organisations that push for better conditions – to welcome sex workers. While the United Voices of the World union is inclusive, most sex workers aren’t union members. Since laws changed in 2012 to require strip clubs to have their licences reevaluated annually, councils have become stricter. Strip clubs are increasingly facing scrutiny across the country, with all but one venue closed down in Sheffield, two out of four left in Bristol and London’s oldest club facing closure.

While campaigners oppose strip clubs in the name of women’s rights, they don’t take into account the lived experiences of dancers who rely on venues for work, says Louise. “None of the dancers were asked to speak [during closure hearings] even though it’s their workplace.”

“If we are a recognised, unionised workforce, councils and local politicians will find it much harder to take away our workplaces,” says Louise, who believes councils act on “moral ideology rather than clubs doing anything wrong” when rejecting club licences. “Let’s remember they’re taking people’s jobs,” she says.

Sage Woodford*, a 34-year-old queer sex worker and activist based in London, helped organise the strike. She says she wanted to send a message that sex work is a labour rights issue and should be treated as such.

“We’re hoping it will make visible our dissatisfaction with the way feminised labour across the world is undervalued and often not recognised as work,” says Sage, who didn’t want to be identified by their real name to be able to talk more honestly about issues with the sex industry.

“As sex workers, it’s difficult for us to reassure our clients we want to be with them whilst talking about how the industry could be improved.”

This is part of the reason Sage and other sex workers will be making noise about their rights on Friday. “A lot of discourse around sex work talks about sending a message about what’s acceptable in society,” she adds, “erasing the practical reasons people need to use survival strategies like sex work.”

Sage stresses that most sex workers enter the industry consensually, or because they feel better off doing sex work over other low-paid work: “people’s needs are not being met, so they end up forced to do sex work in unsafe conditions and find themselves being policed for just trying to survive.”

But women of all backgrounds will be standing together at Friday’s strike and marching for the common injustices they face, from sexual harassment to emotional labour.

“The way we’re invisibly relied on,” says Sage, “but not given our due for the work we do, is why this is so necessary.”

Linkedin
RELATED ARTICLES
OTHER ARTICLES
Following the release of his newly republished 1991 book, Redheads, the American photographer reflects on his celebration of ginger people and their magnetic power.
The government’s failure to take long Covid seriously has led to the formation of a group campaigning for the thousands of forgotten victims of the illness.
The failure to hold landlords to account is denying tenants their basic dignity, writes Bella Saltiel.
In our first OFFF Dispatch piece, the Arce Studio founder shares her tips on standing out from the crowd.
The government is scrapping the Human Rights Act in a move that will hit marginalised people hardest.
New legislation is set to make it more difficult to hold Israel accountable for its human rights abuses.