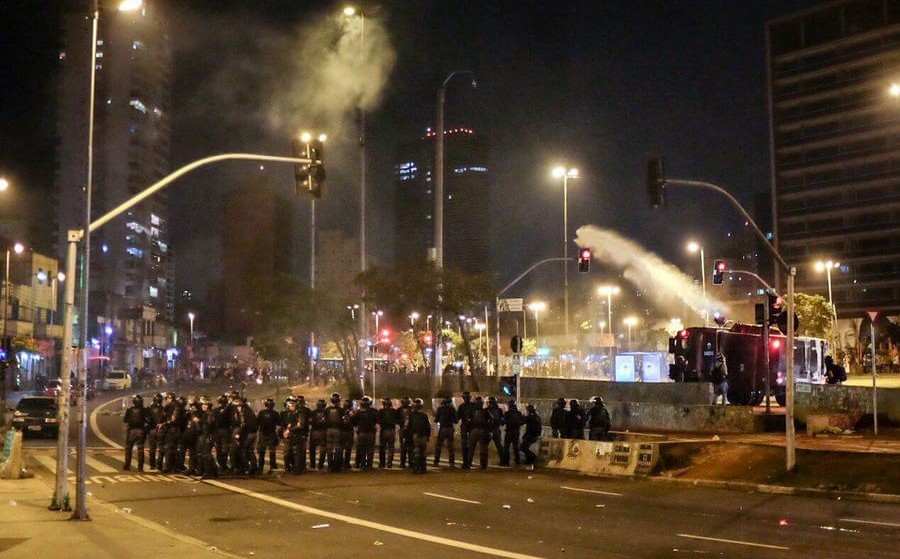 Journalist Luciana Nanci watched anti-coup demonstrations brutally repressed by police with tear gas, stun grenades and water cannons. This is what she saw.

Journalist Luciana Nanci watched anti-coup demonstrations brutally repressed by police with tear gas, stun grenades and water cannons. This is what she saw.

Sunday’s demonstration in São Paulo started out so beautifully, with people from all ages and backgrounds marching to the beat of drums. But that peaceful atmosphere was broken when, all of a sudden, we heard a loud bang and smoke filled the air.

People were protesting against the parliamentary coup that removed democratically elected Workers Party president Dilma Rousseff, to replace it with a hard-line, right-wing government led by Michel Temer.

Everybody started to run as the police began violently cracking down on the protestors. My hands were shaking as helicopters hovered overhead, shining light beams down on to the streets. They cleared the square with water canons and we could hear the bangs from firing tear gas canisters and stun grenades all around us. Dozens of police cars and members of police special operations teams began shutting off the ends of the roads and the whole area was evacuated in minutes.

It was all so unexpected – but the numerous people injured in the protests of previous days should have given us an idea of what was to come. The first injured person was a college student who was hit by the fragments of a tear gas or stun grenade on Wednesday. We now know she has lost eyesight in her left eye. Two photographers have so far been injured; one of them had their camera broken into pieces by the police. At least another five people have been hurt in clashes and a two-year-old girl was reportedly hit by pepper spray. We also heard reports of police waiting until the protesters got into the narrow streets, with no way out, to throw bombs at them. A friend of a friend was chased by the police for no reason. When they caught up with him, they ran over both of his feet with their motorcycles. He was left with bruises all over his body and a broken arm from being struck with police batons. 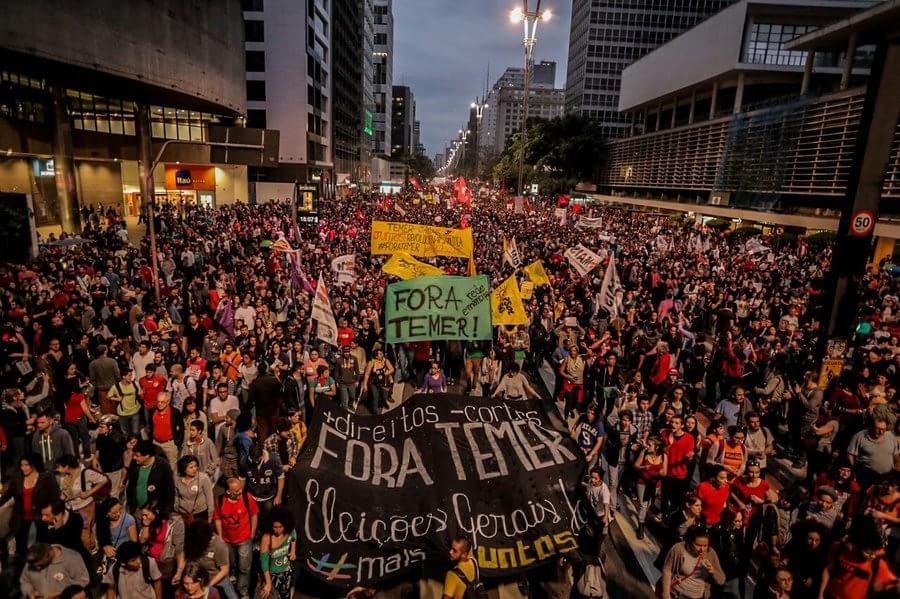 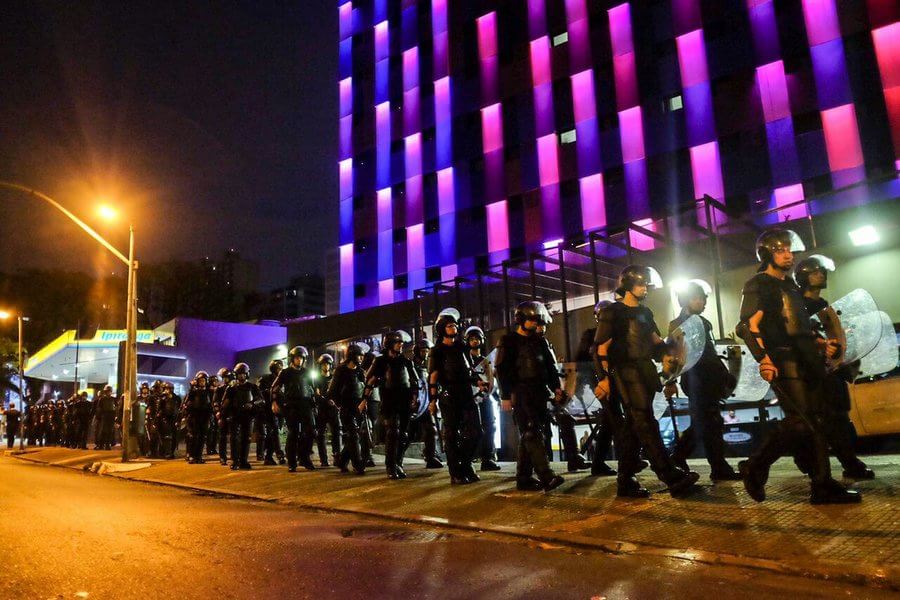 For a moment, my friends and I were close to one of the police lines but did not dare get any closer. I am a filmmaker and I had my camera with me. But I was so nervous I could not get a single clear shot. My heart was beating fast and I could feel my heavy breathing under the gas mask I brought to protect myself from the tear gas. Police were driving around in their cars, pointing machine guns out of them. We hesitated for a while, but decided it was time to leave and try to get home.

There have been protests every day since Brazil’s elected president Dilma Rousseff was impeached by the Senate on Wednesday August 31, despite no proof of her committing a criminal offence. Michel Temer, who replaced her, is himself heavily implicated in ongoing corruption investigations. Hundreds of thousands have taken to the streets across Brazil to demand that politicians respect the votes of 54 million people who elected Rousseff and to call for new presidential elections. 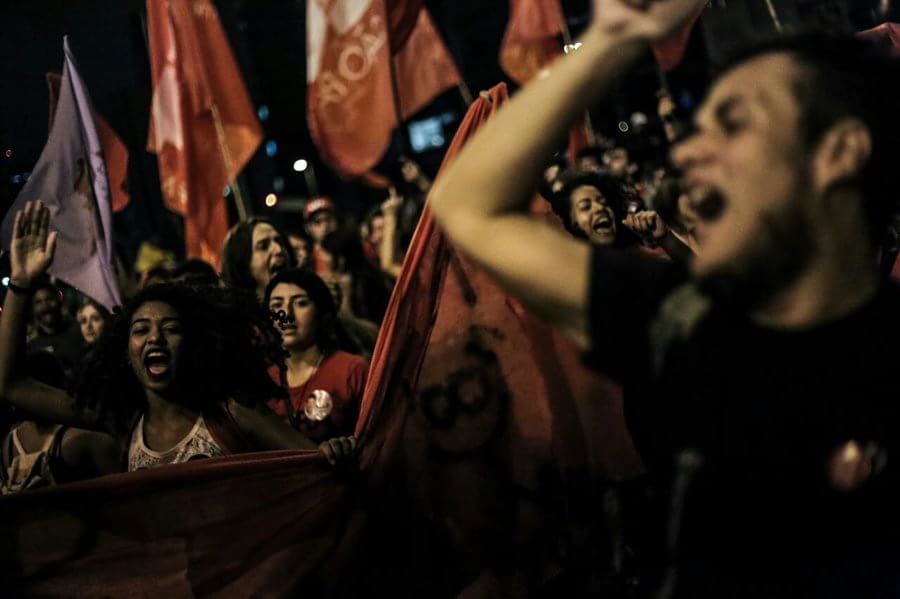 The protest on Sunday September 4 was the biggest yet, and after missing the others due to work, I was determined to be there and make my voice heard – but I was scared. On the recommendation of friends, I filled my backpack with a gas mask, safety goggles and milk of magnesia lotion, which is said to protect your skin against pepper spray and tear gas.

It all began so peacefully, with a hundred thousand people in attendance chanting ‘Fora Temer’ or ‘Temer Out’. People were drumming and making their demands through music, as they marched for hours from Avenida Paulista towards Largo da Batata square. It was evening when we arrived and although the march had been totally peaceful, we were aware that the police usually wait until it gets dark to start attacking – which they did.

We were lucky to have got out of the square without being injured. Friends saw police shooting bombs at bars where people were just enjoying music and a drink – people who had nothing to do with the demonstration. It was pure, indiscriminate, arbitrary action. 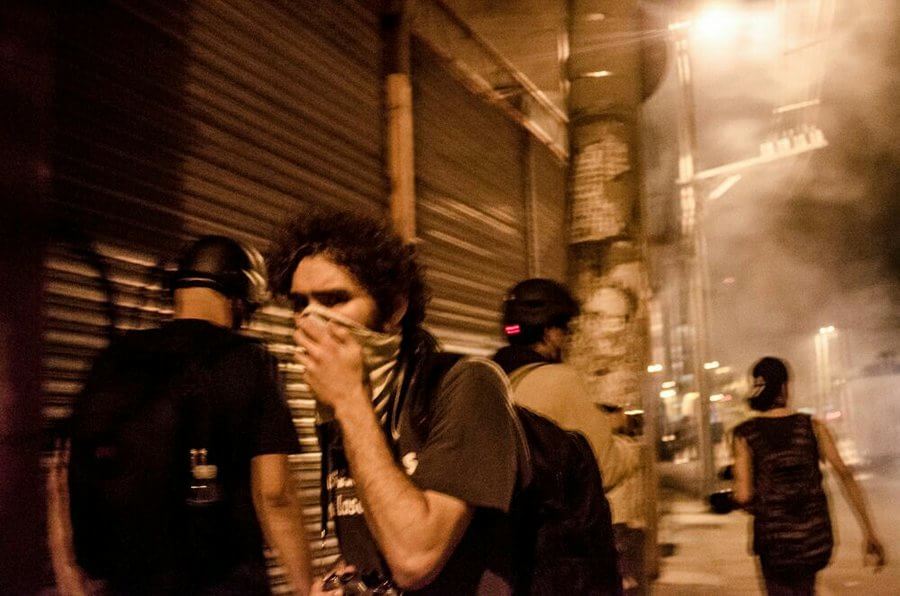 It took me a while to recover, before we eventually made it to the underground station. The next day, I woke up to the news that 27 people had been taken into custody. Some were teenagers, arrested before the march for carrying the same things I had in my backpack – innocent items, that could only minimise the effects of the weapons police were using against non-violent civilians. After a day in jail, most were released.

One of the ways police get away with such arbitrary and disproportionate behaviour is down to the mainstream media, who distort the facts and make people believe it is the protesters who incite violence. I saw the opposite with my own eyes. Brazil’s oligarchical media is dominated by five filthy rich families, who overwhelmingly supported the coup.

Together we are stronger than the violence of the state, the corruption of politicians and the lies of the media. In a country where so many rights are violated every day, we need to be seen and we want to be heard. Together we are definitely stronger.

But we need the international community to help get the word out on what’s going on. If the world turns its attention to the wave of atrocities we have been experiencing, it is one of the few ways to put pressure on those responsible – and to get our democracy back.

Luciana Nanci is a journalist and filmmaker based in São Paulo.

Linkedin
RELATED ARTICLES
OTHER ARTICLES
The action took place in response to the 200 asylum-seeking children who were placed in hotels run by the Home Office who have gone missing.
AI companies that develop image-generators using copyrighted artwork from the internet are coming under fire from artists who say that it amounts to theft.
After fleeing the war in Ukraine, people are finding it impossible to secure affordable and decent housing in the UK.
Photographer Sean Maung reflects on documenting a small town in Pennsylvania afflicted by high levels of unemployment, poverty, violence, crime, and addiction.
After blocking the Scottish government’s gender recognition reform bill, Westminster is now devising further changes to the law to make it harder for trans people to self-identify.
Filmmaker Laura Poitras discusses her new documentary which traces the remarkable life of the artist-activist and the impact of her battle against the US opioid crisis.