News & Politics / Activism / Women’s March on London: Should we thank the new President? 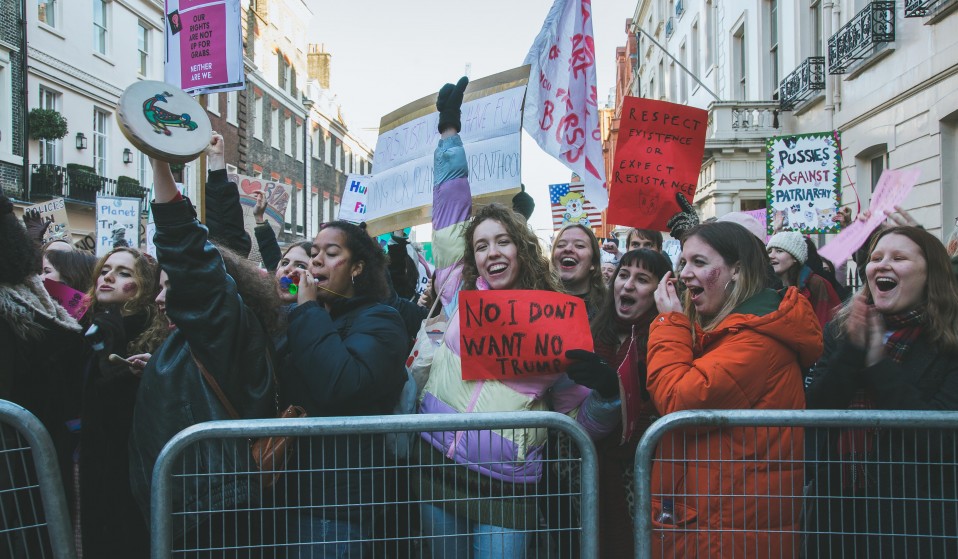 On the day after America’s new President is sworn in, over 100,000 people march through the capital for the Women's March on London. But this isn't about POTUS.

It’s the morning of 20 January 2017, and as the 45th President of the United States of America is about to be sworn in to office, an envelope floats through my door, landing on the doormat.

‘Dear Miss Buonaiuto. Thank you for coming for your cervical screening test.’ 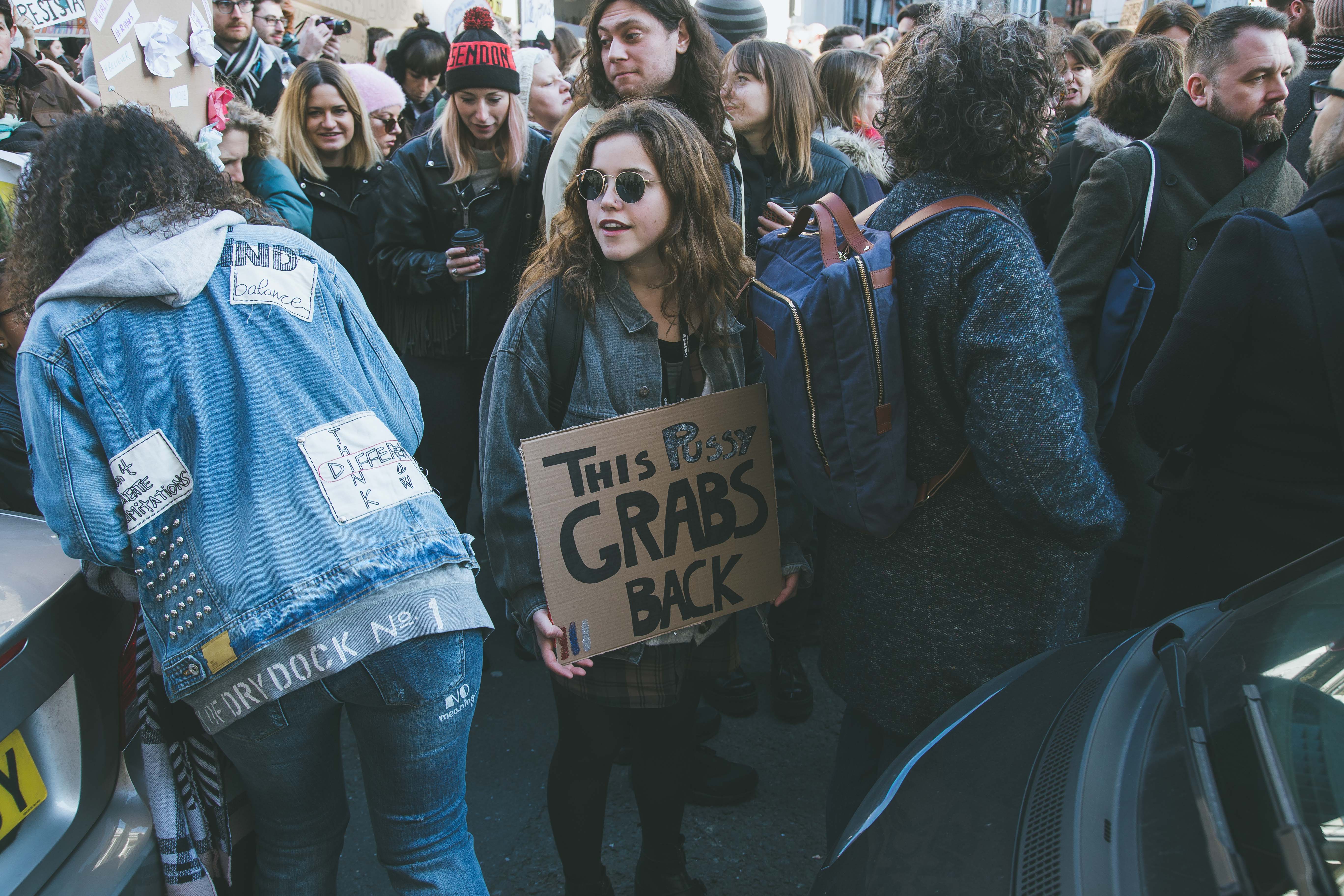 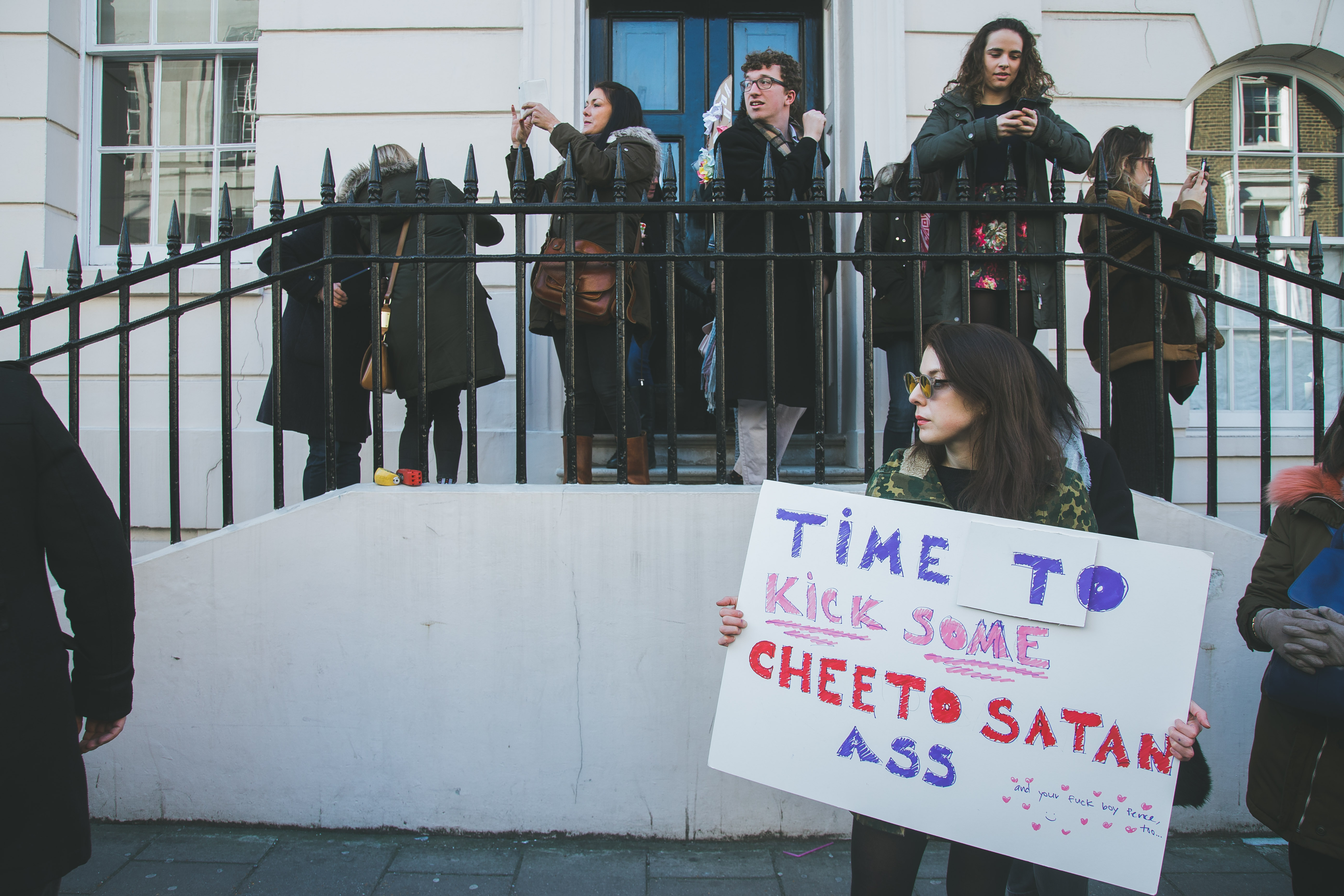 I think back to whining about how uncomfortable all three seconds of that free smear test were, in that clean, central heated surgery room. The kind-faced nurse with her informed advice: “Now just relax, or it will make it harder to get in there”.

Sitting on the tube, reading how Obama’s Affordable Healthcare Act is about to be dismantled as a matter of priority for the incoming President, I feel a tinge of guilt about my ingratitude for the free healthcare as a woman I’m so lucky to enjoy. 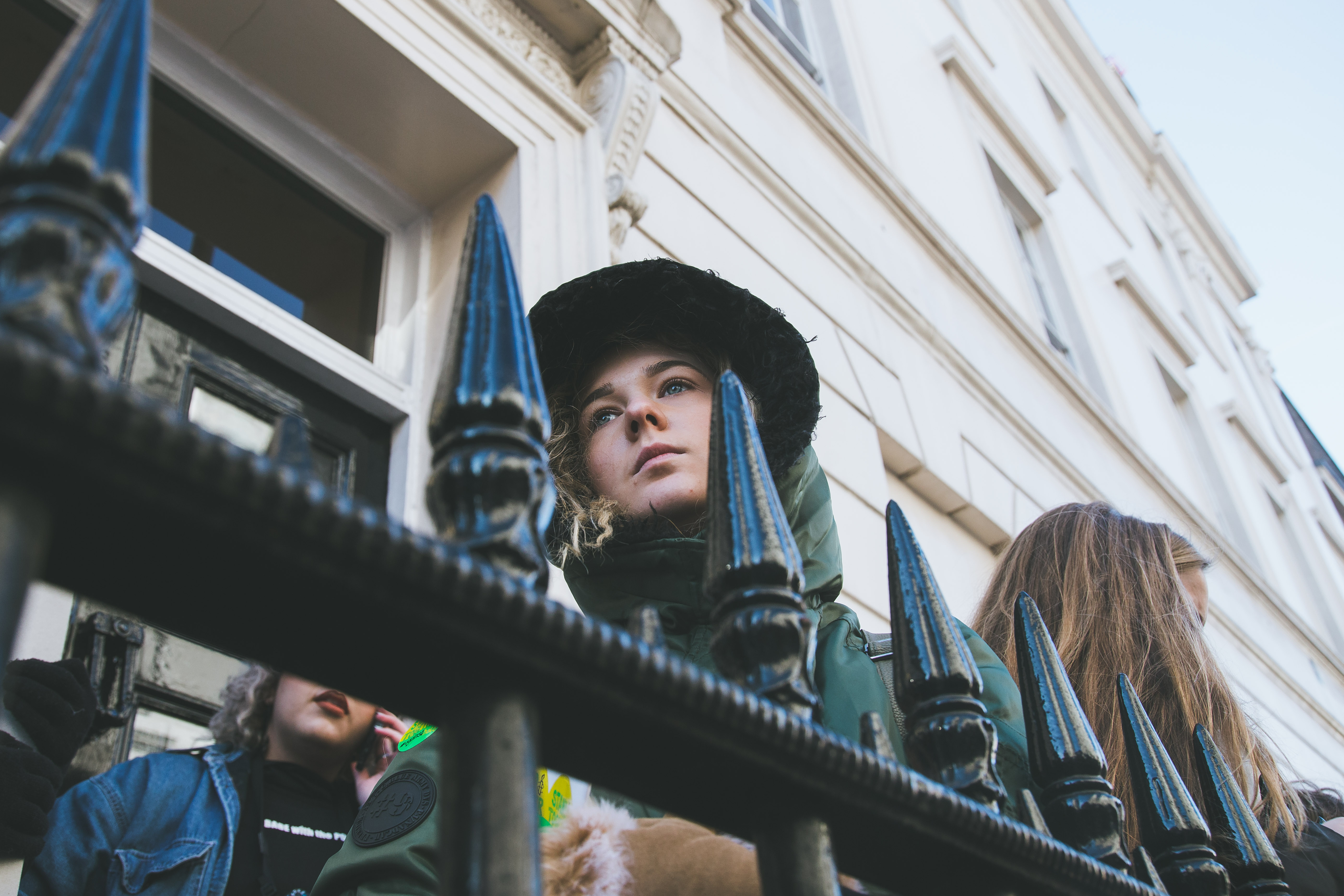 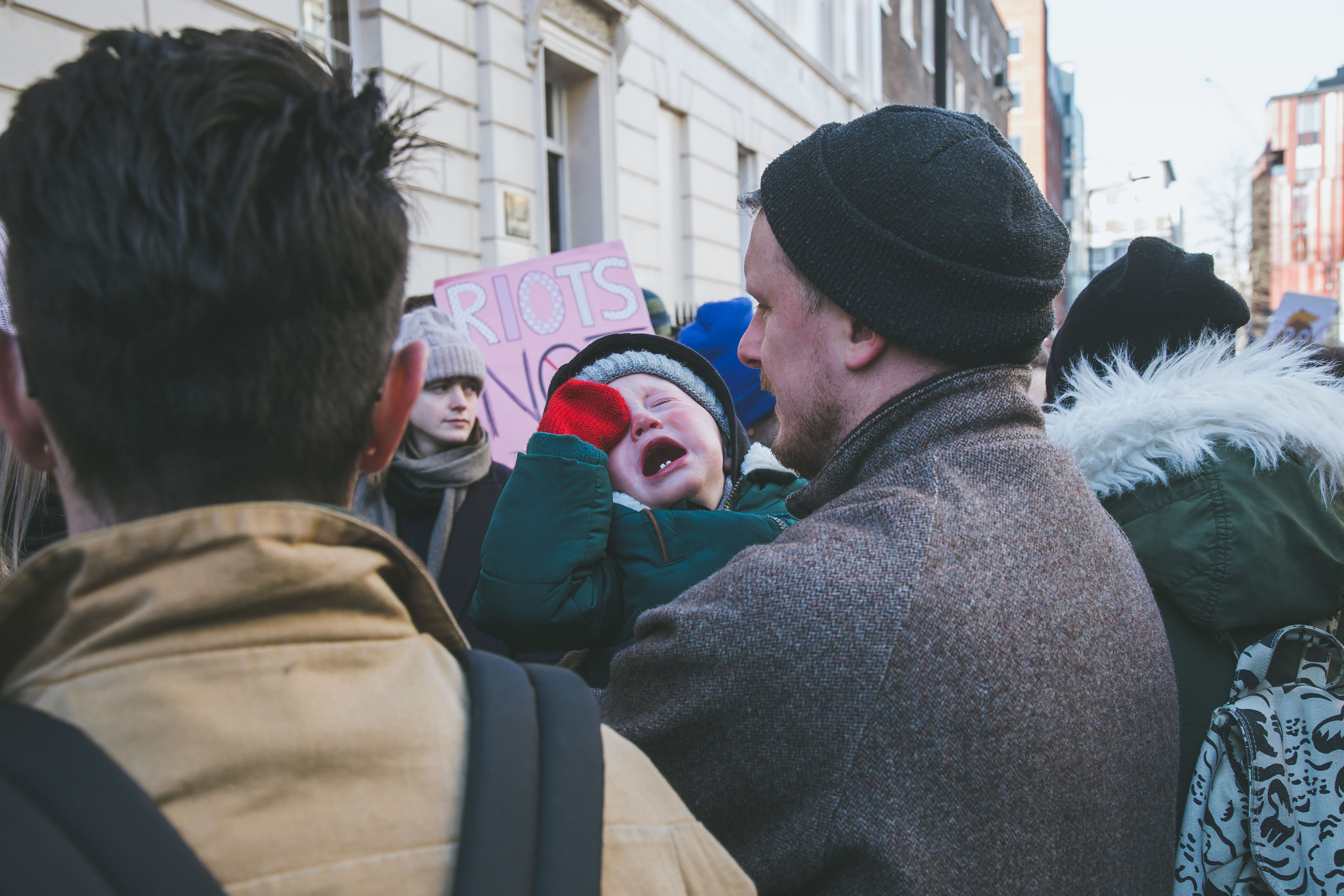 Across the globe, over 600 individual Women’s Marches are set to take place on the day after the inauguration, reaching as far from the U.S. as Kenya and Antarctica, and in London it’s happening too.

On the morning of the march, I can’t deny that I feel somewhat sceptical. If it’s about the U.S. election, is it our place to speak out against the democratic outcome of another country? And is a march really going to save our souls? 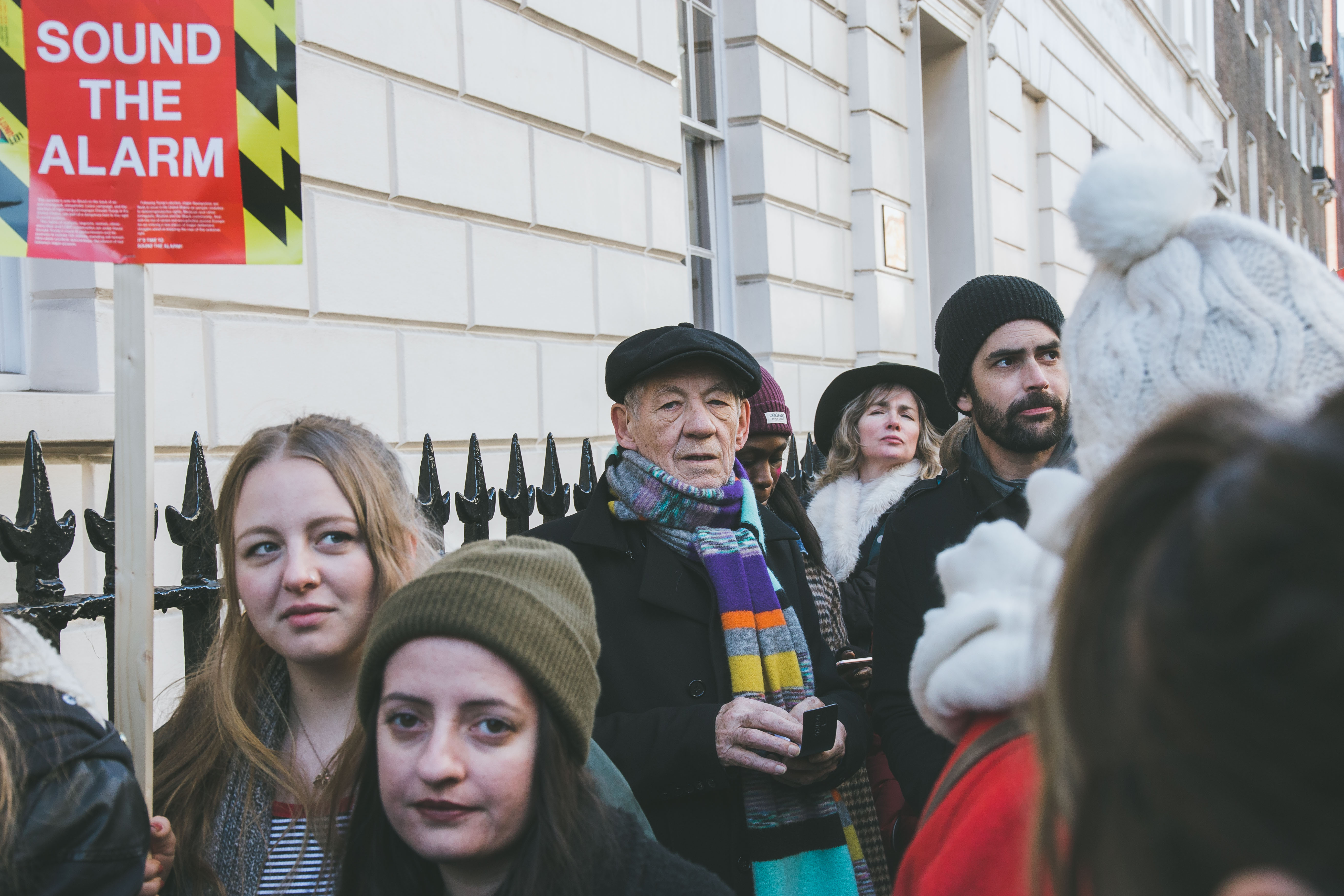 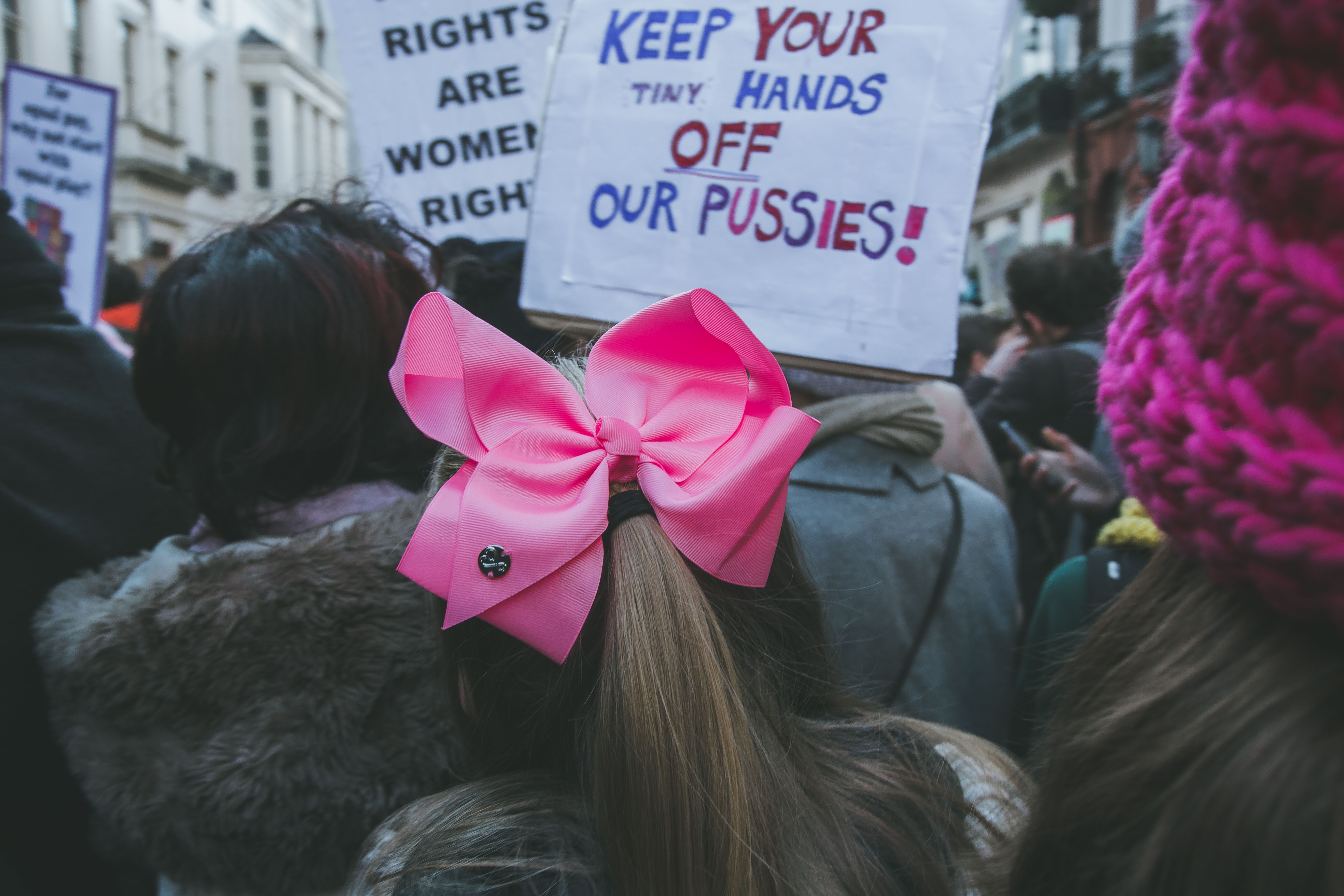 I share these thoughts with my friend Ellen, who invited me to come along in the first place.

“It isn’t just about that. I think it’s really important to take this opportunity and speak up with the rest of the world to say that we’re unhappy with the way things are,” she says down the phone.

“All human rights are threatened right now. Do you know about the Global Gag Rule? I find that especially terrifying.” 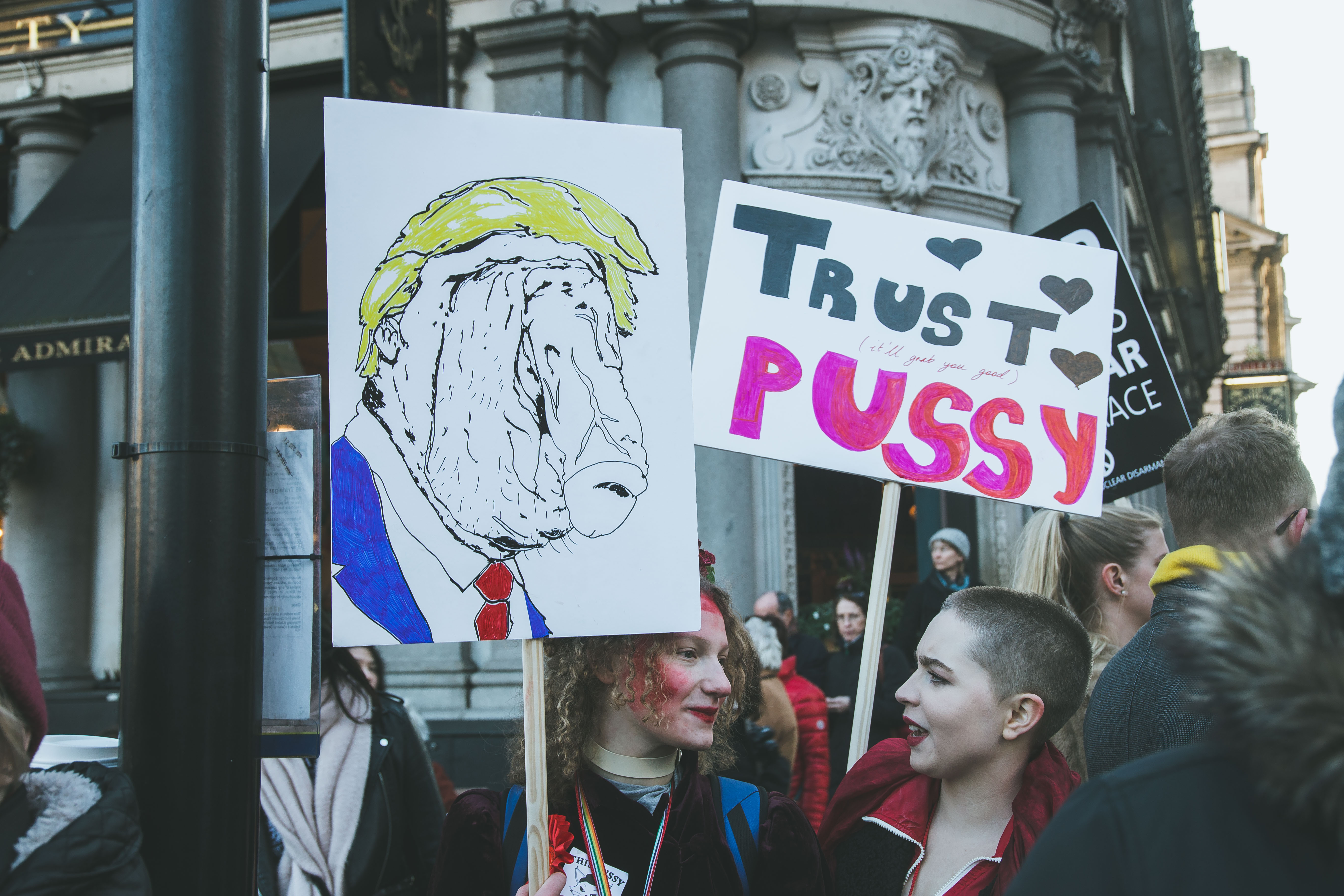 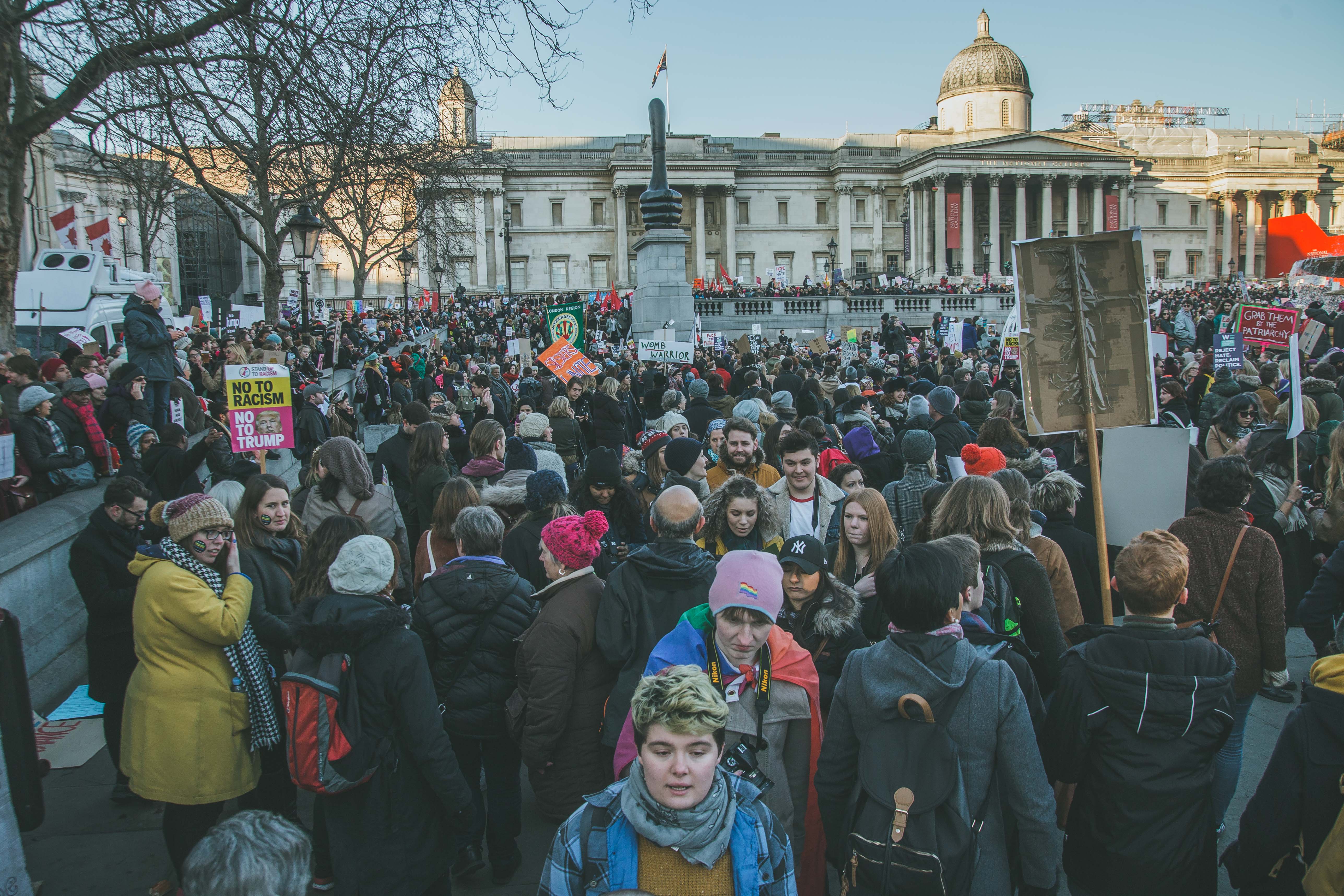 I had never heard of the Global Gag Rule. I do the research and what I learn chills me. In the ’80s, the Reagan Administration introduced a policy to stop foreign NGOs which perform, counsel, refer, or even advocate abortion services, from receiving any sort of U.S. funds.

Since then, the Global Gag Rule has come in and out of play between Republicans and Democrats. So, while the policy has been scrapped for the past eight years under Obama’s administration, it now seems certain to return.

My scepticism flakes away. Thanks Ellen, thanks NHS England and dare I say it, thanks, Mr President of the United States, for being so abhorrent that you’ve managed to catalyse a global women’s movement. 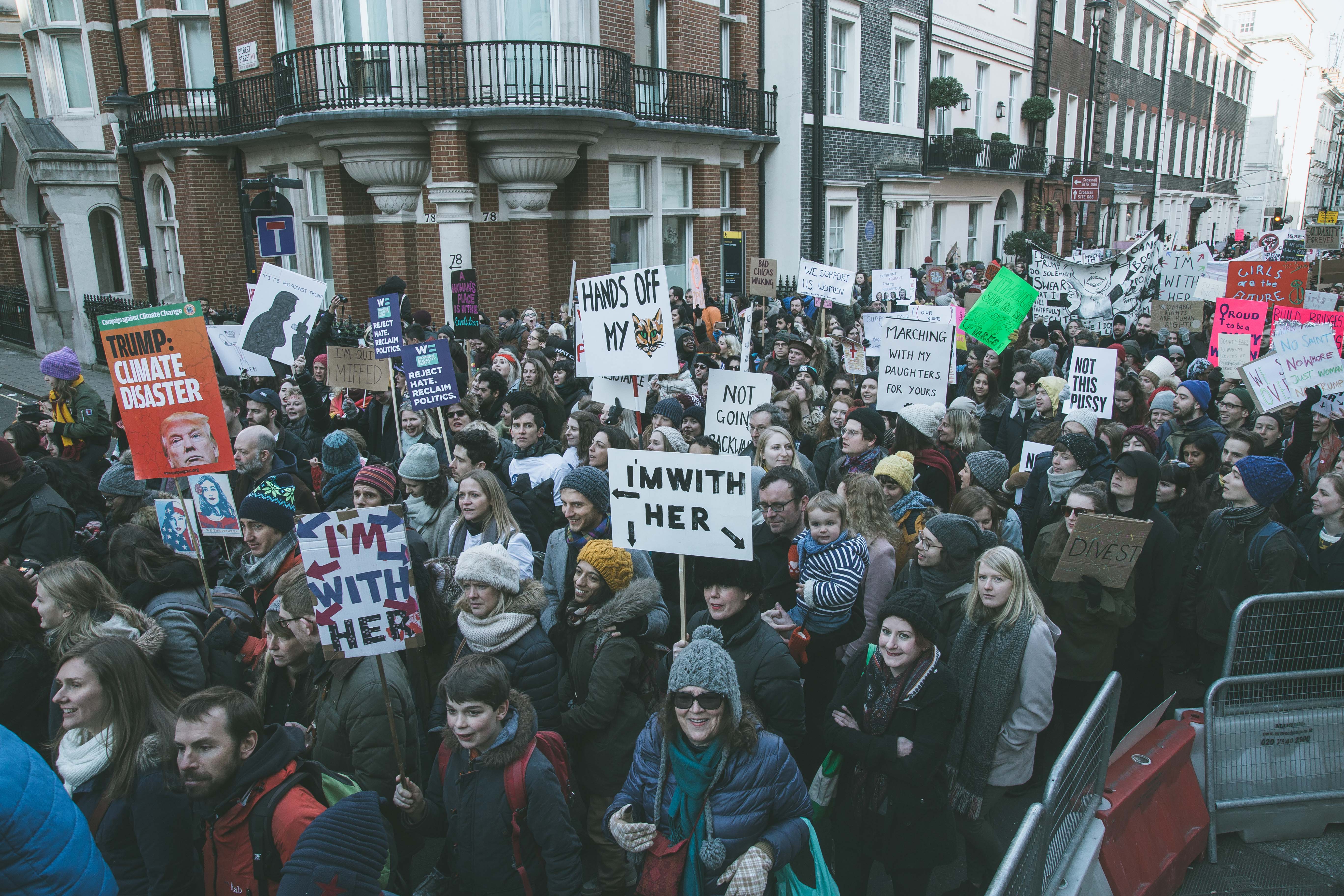 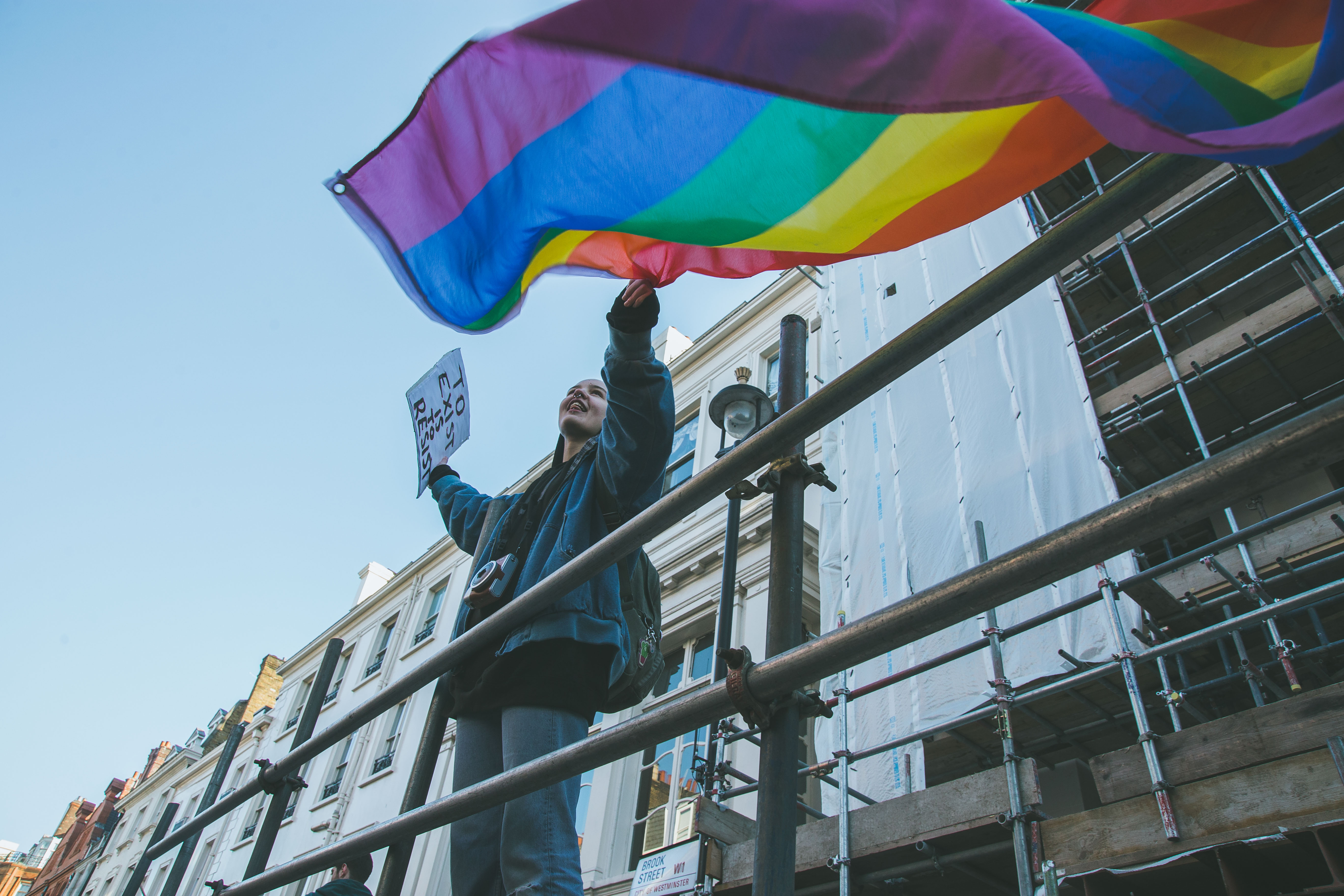 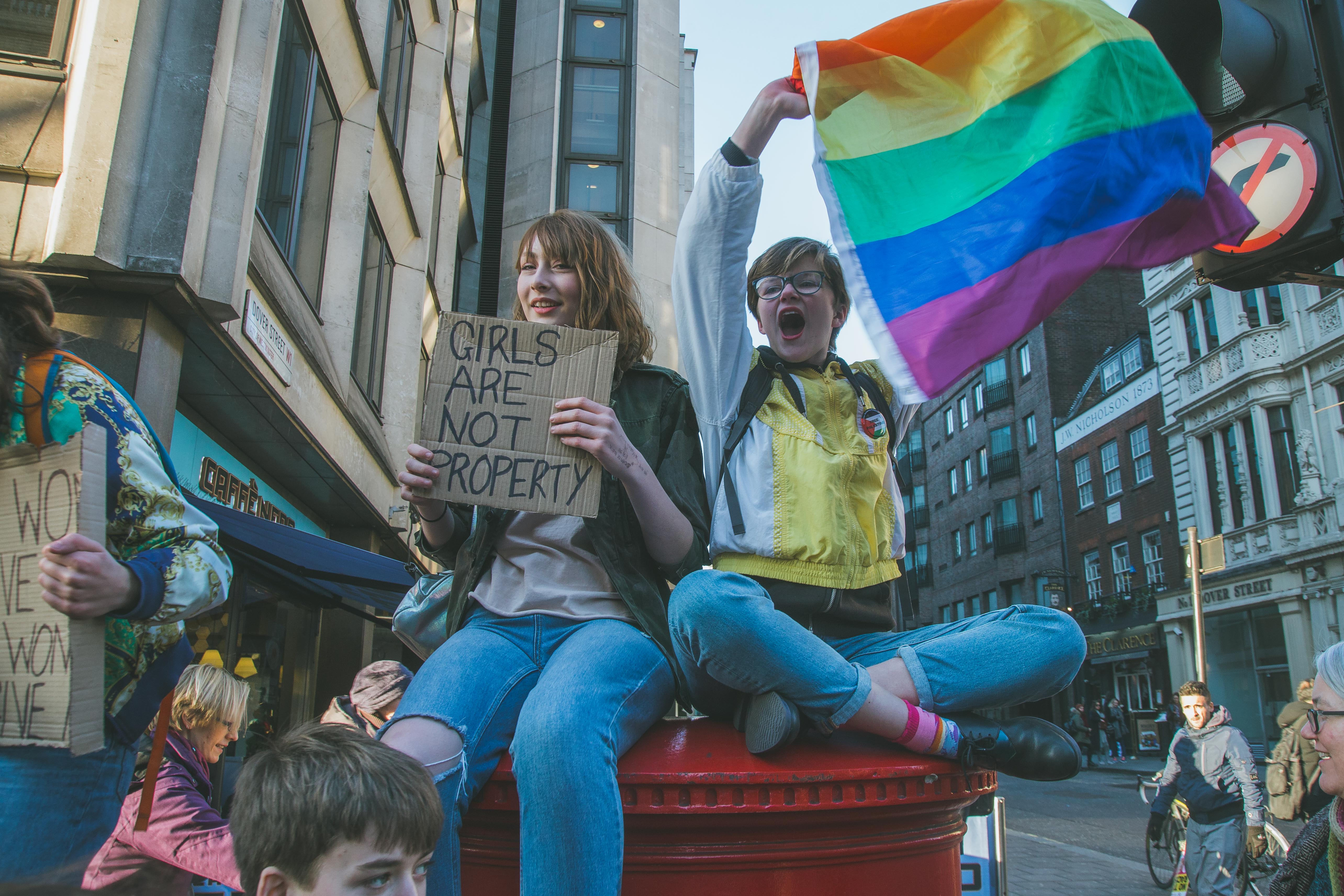 It’s crispy and sunny when our train pulls up into central London, the streets heaving with women and allies as far as my eye can see. Our station has already been closed due to overcrowding.

“Due to the fucking patriarchy!” someone shouts out, and the carriage laughs appreciatively.

Emerging from Oxford Circus station, the streets are already jammed , and it’s not for the January sales. Turning off Oxford Street towards the square we become stuck; there are people as far as the eye can see. Facebook said that 42,000 planned to attend today, but in reality numbers are more than double this.

At midday, the first set of speakers are supposed to be taking the stage, but from where we’re stood there’s no way of seeing. Not to worry, though: the throngs seem happy with placards held aloft.

I get talking to 19-year-old Roda, who’s never been to a protest before.

“I wanted to see what it would be like, and it’s quite nice,” she tells me, as a police helicopter circles above. “I was expecting it to be mainly women, but there’s still a fair amount of men too; people of different ages, different ethnic backgrounds, which is really cool.” 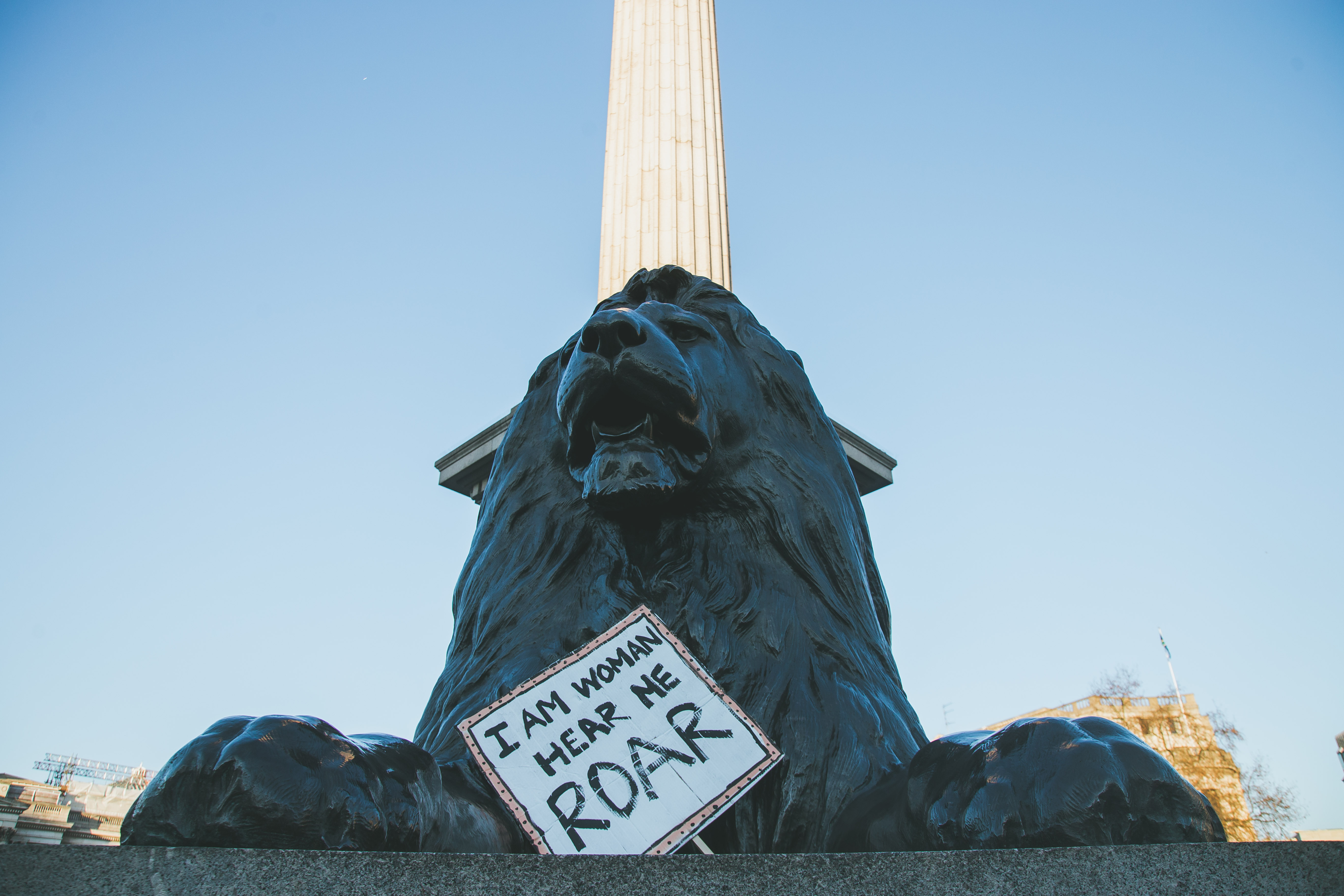 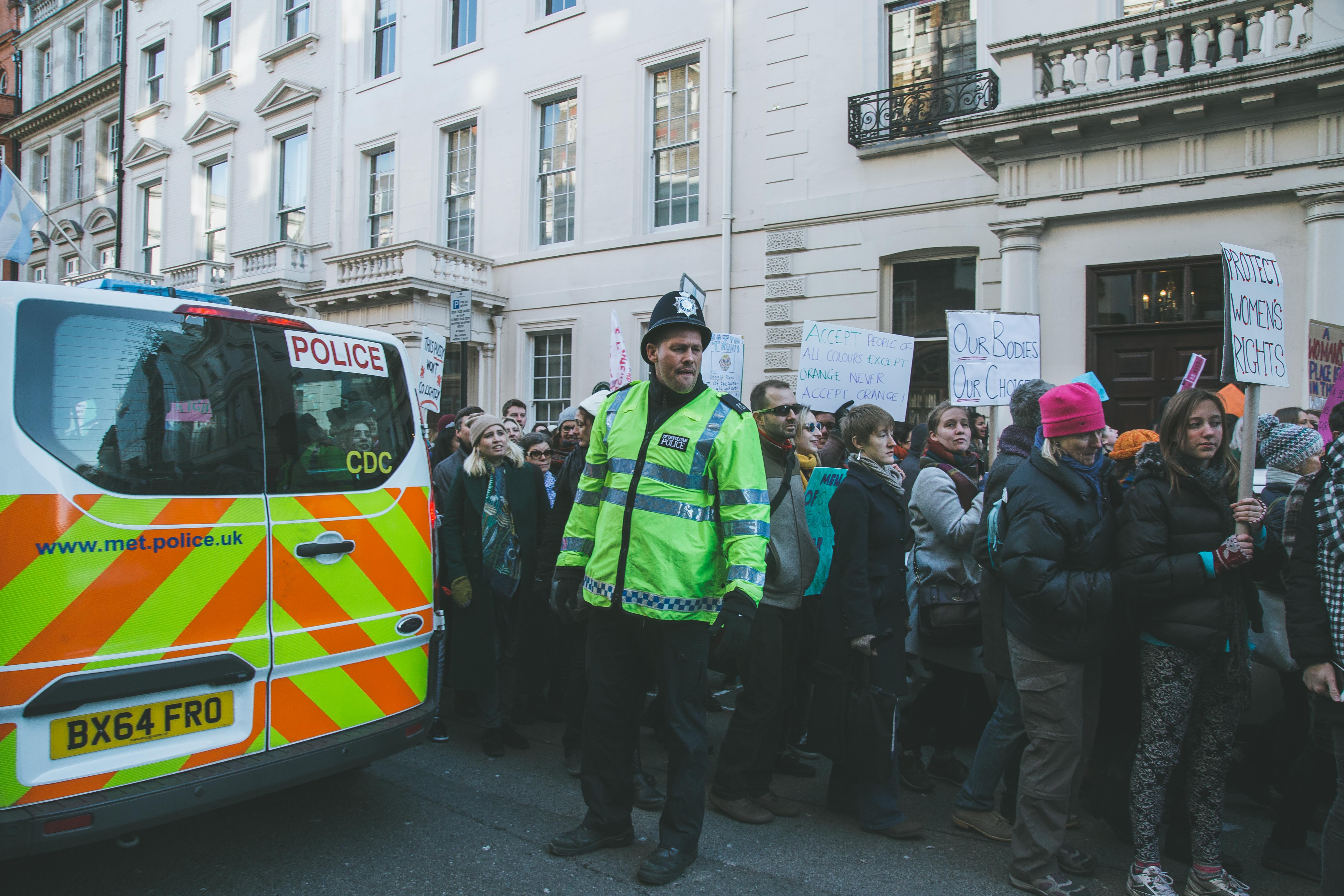 London does seem pretty well represented in all its glorious intersectionality. In the distance, drums can be heard; there’s something happening ahead of us but we won’t be part of it any time soon.

“It’s Cristina’s first protest – she’s two,” a bloke called Mark tells me, pointing at his young daughter. “I think it’s interesting for her to see this kind of thing! It’s important for me to be here as a man with a daughter. It’s about the world she’s going to grow up in.”

Recent events have made the future seem uncertain. When a bigot, misogynist and racist takes the seat at the head of the world’s table, it threatens to normalise hatred towards all of us who aren’t old, straight and white American men.

Conversations like this continue, and it’s almost two hours later before the crowd starts to move towards the square. “EQUALITY! NOW” we yell as we march.

It’s 3.30pm when we arrive at Trafalgar Square, and the crowds are slowly dispersing. 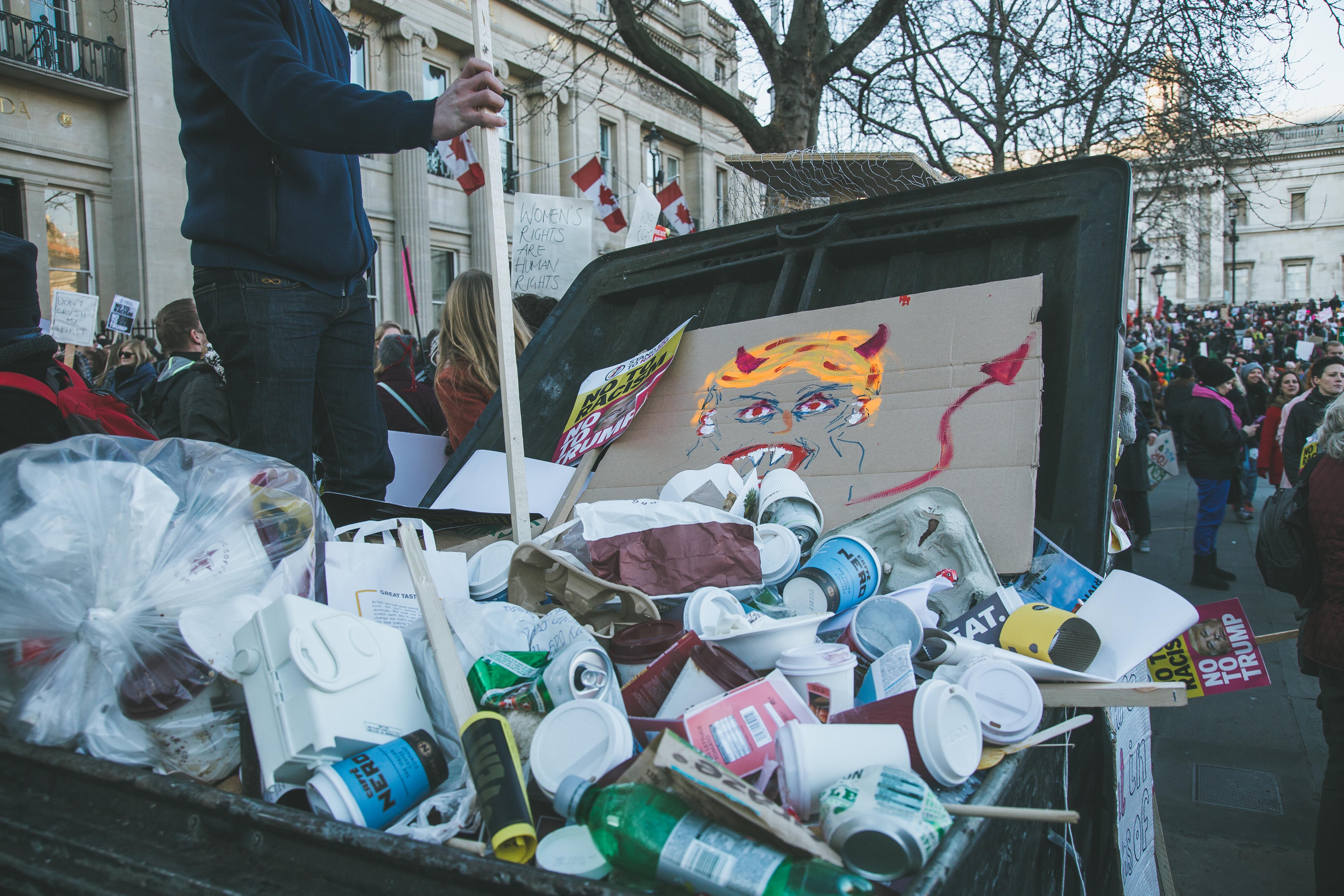 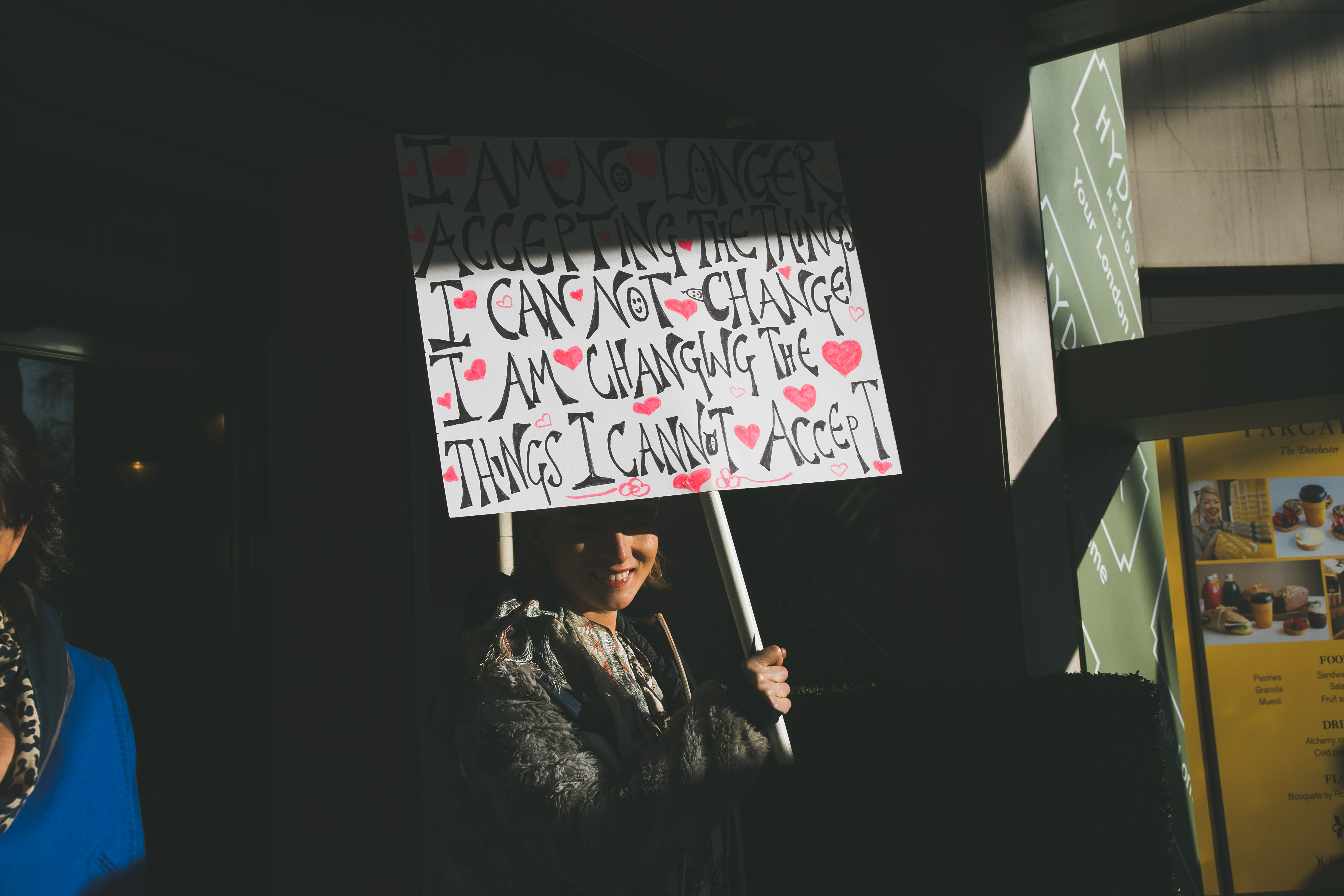 Today’s marches won’t overthrow the new administration, they may not affect one change to a single policy. And yet the overwhelming show of solidarity for equality and humanity brings unprecedented hope to me at least, in a world that seems more divided than ever.

Way back when the U.S. presidential candidates were announced, I decided to keep the then orange-faced candidate’s name out of my mouth and off of my social feed because… wouldn’t all publicity be good publicity?

It’s too late now, but my personal protest continues; I refuse to use his name on any platform. Yes, there are loads of references to him and his tiny hands today, but the 100,000 people here are a show of force for solidarity, equality, women’s and human rights, transcending his hateful waffle. And I can’t help but feel like this is just the beginning.

Despite frostbitten extremities, I head home feeling warm inside. Thank you Mr President who I shall not name, for catalysing a movement to unite and ‘overcomb’…

Linkedin
RELATED ARTICLES
OTHER ARTICLES
At his West Bank restaurant, Fadi Kattan established himself as the voice of modern Palestinian cuisine. Now, he’s bringing his innovative, bold flavours to the UK’s capital.
Photographer Sean Maung reflects on documenting a small town in Pennsylvania afflicted by high levels of unemployment, poverty, violence, crime, and addiction.
As she gears up for the release of her first book, the 24-year-old climate activist talks standing up to authority and building a more inclusive movement.
The action took place in response to the 200 asylum-seeking children who were placed in hotels run by the Home Office who have gone missing.
Tristan O’Neill’s shots of dancers caught in moments of reverie at the height of rave’s golden age are a testament to the UK’s legendary club culture.
A new podcast is opening up the conversation between trans women and trans amorous men in the hope of building coalitions.