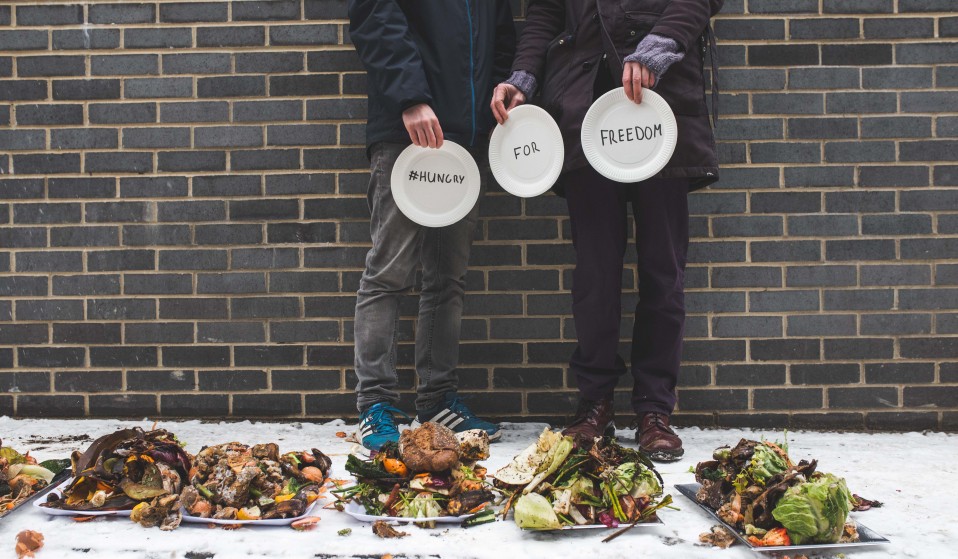 Trays of decaying food were left at the security firm's London office this morning, as women in Yarl's Wood Detention Centre continue their hunger strike.

Trays of decaying food were left on the doorstep of the security firm's London office this morning, as women in Yarl's Wood Detention Centre – which Serco operate – enter their second week of hunger strikes.

At 8am this morning, just at London’s icy rush hour got into full swing, activists descended on the headquarters of Serco just behind Angel station, determined to cause a scene.

Armed with trays of rotting food, campaigners from Lesbians and Gays Support the Migrants dumped the stinking waste on the doorstep of the security firm, to protest the treatment of women held in the infamous Yarl’s Wood detention centre which the company operates. Currently 120 women who are being detained there without charge, simply by virtue of their nationality, are entering their second week on hunger strike. 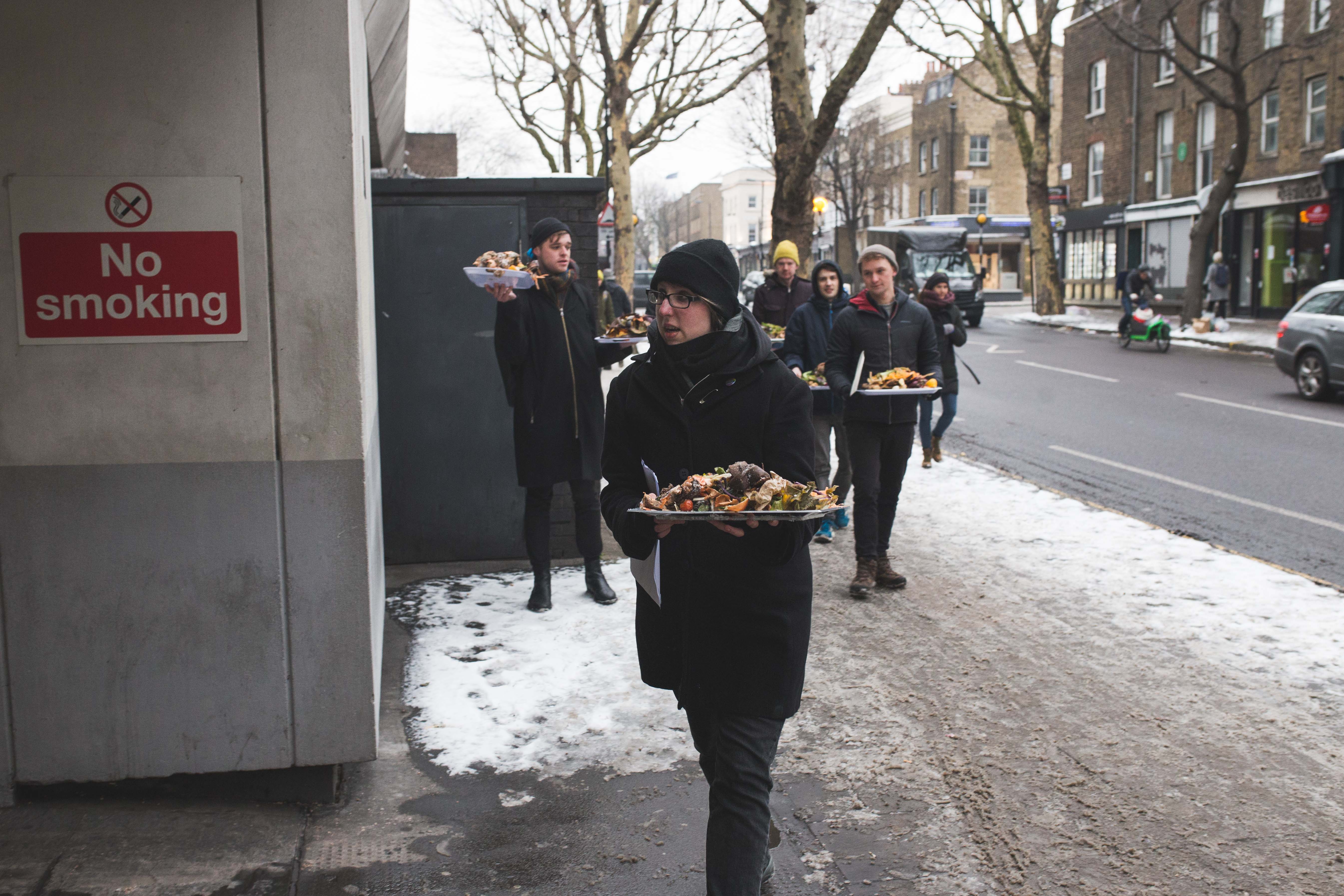 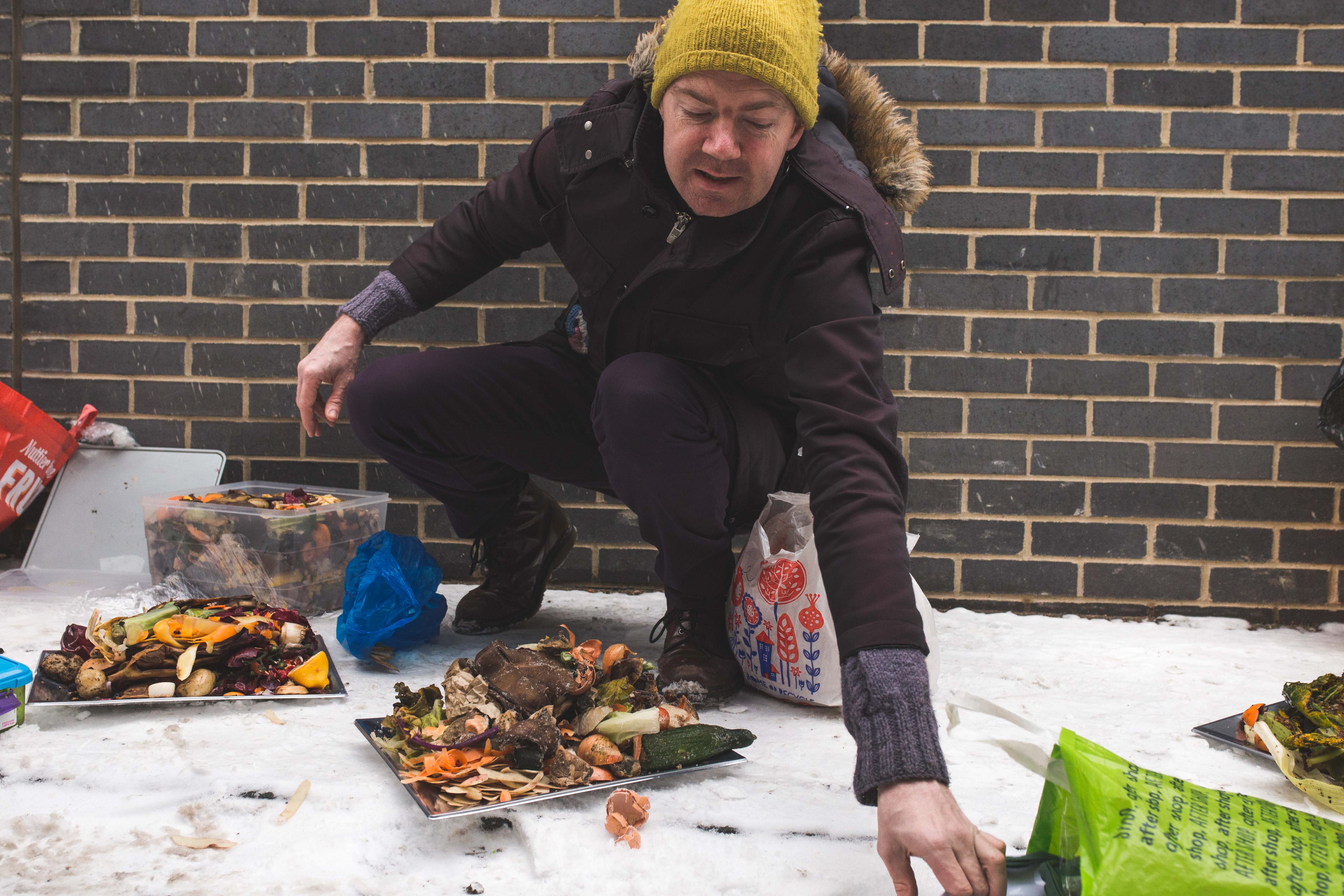 According to the activists, the premise this morning was simple: the UK’s immigration detention system is rotten, and so too are the companies that profit from it. Trays of stinking, rotting food should fit right in.

“Serco are trying to ignore the hunger strike happening in Yarl’s Wood detention centre which they’re running,” explained Sam Bjorn, one of the activists, as they walked from a coffee shop close by to their target.

Making their way down an alleyway in the shadow of the company’s head office, another campaigner outlined their rationale for taking direct action. “The UK immigration system is rotten to its core and it’s the brave women of Yarl’s Wood that are suffering the consequences. As Serco continue to ignore the hunger strike we wanted to bring the rotting food to their doorstep. We support their brave fight against this brutal system.” 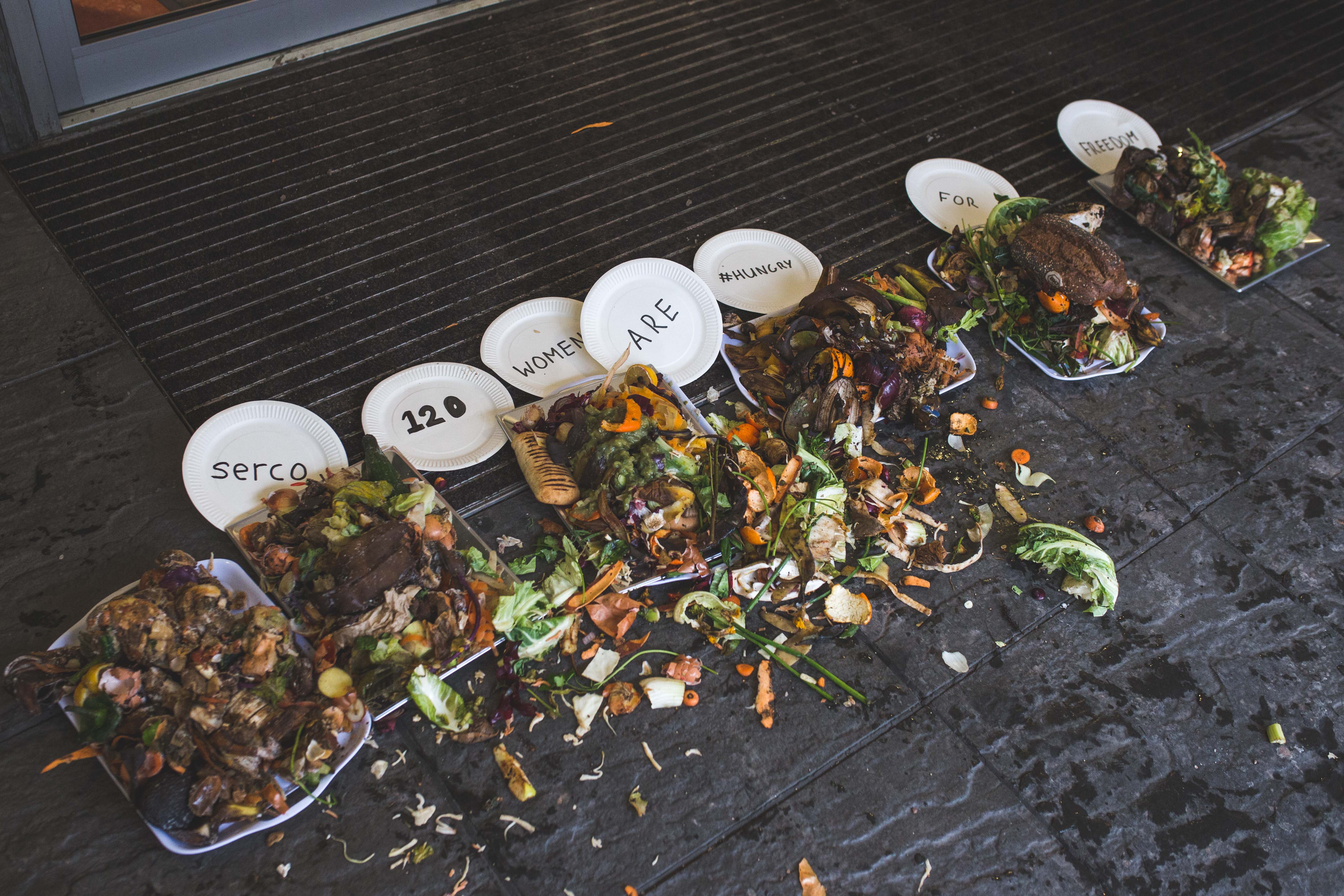 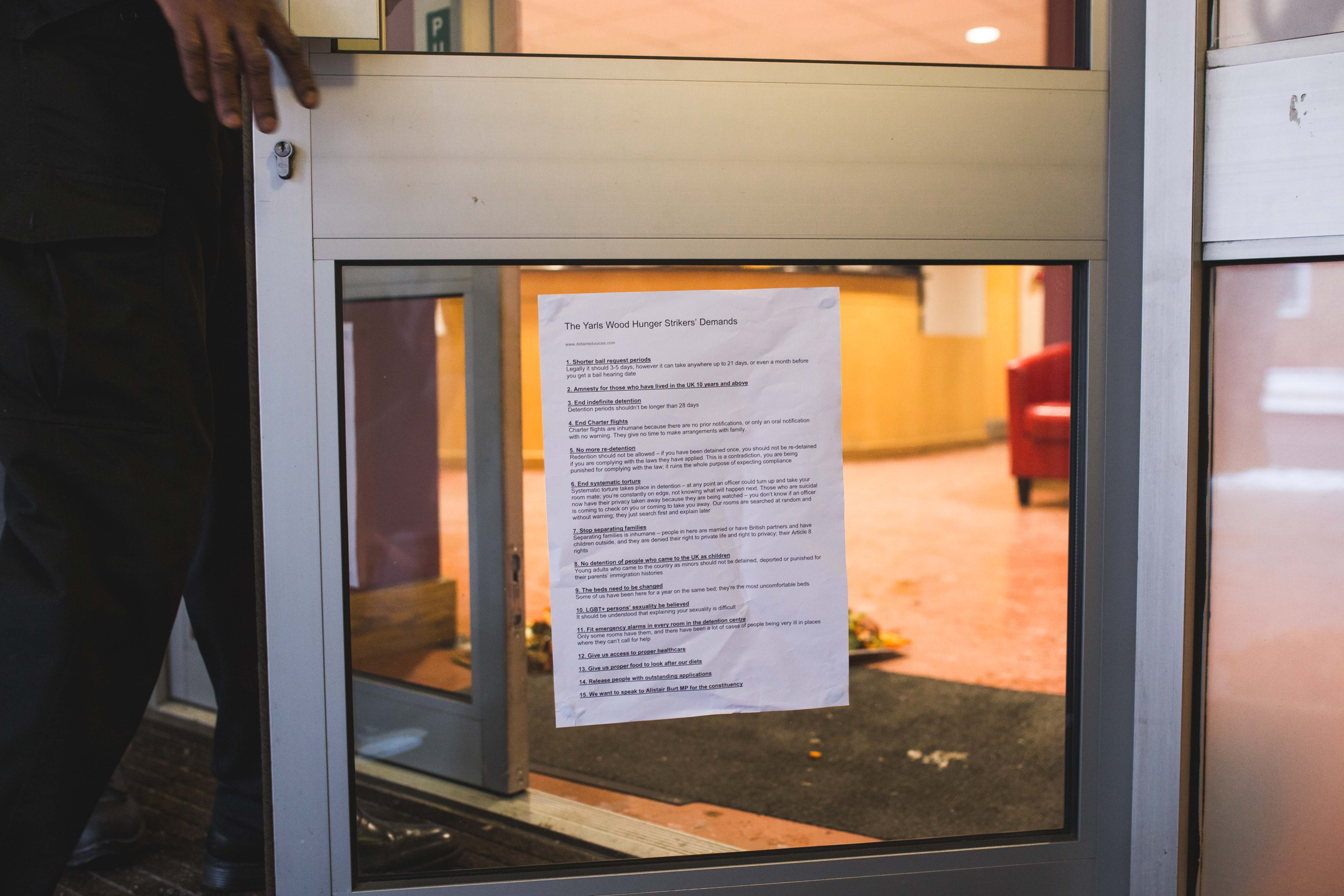 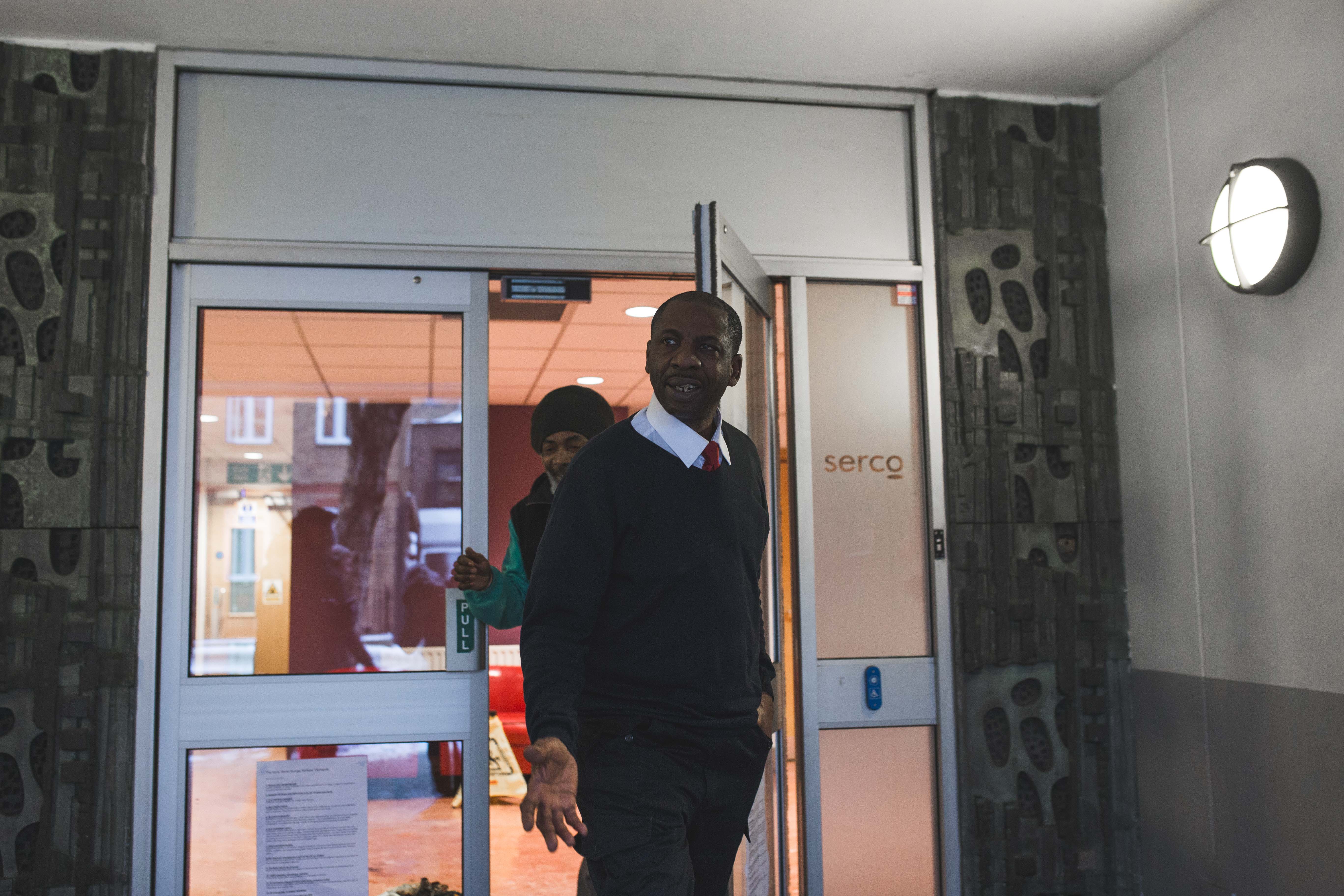 The action itself was over pretty quickly – once the waste was pulled out, alongside a copy of the women’s demands,  they were dumped on the snow-covered ground. Two baffled looking security guards appeared in the doorway, but the activists had scarpered before anything could be done. The list of demands were left pinned to the building, campaigners hoping those who work for the company might take note. 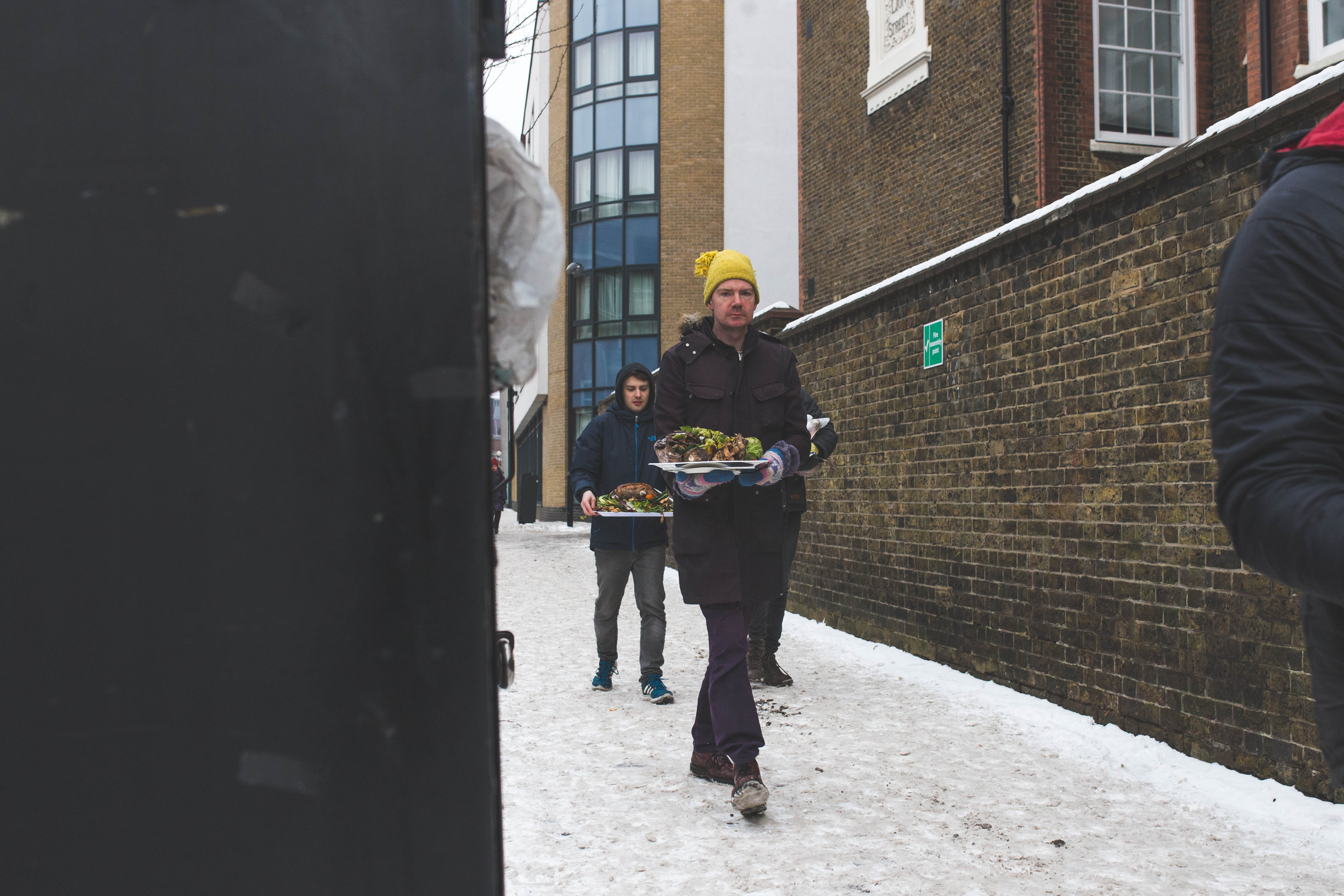 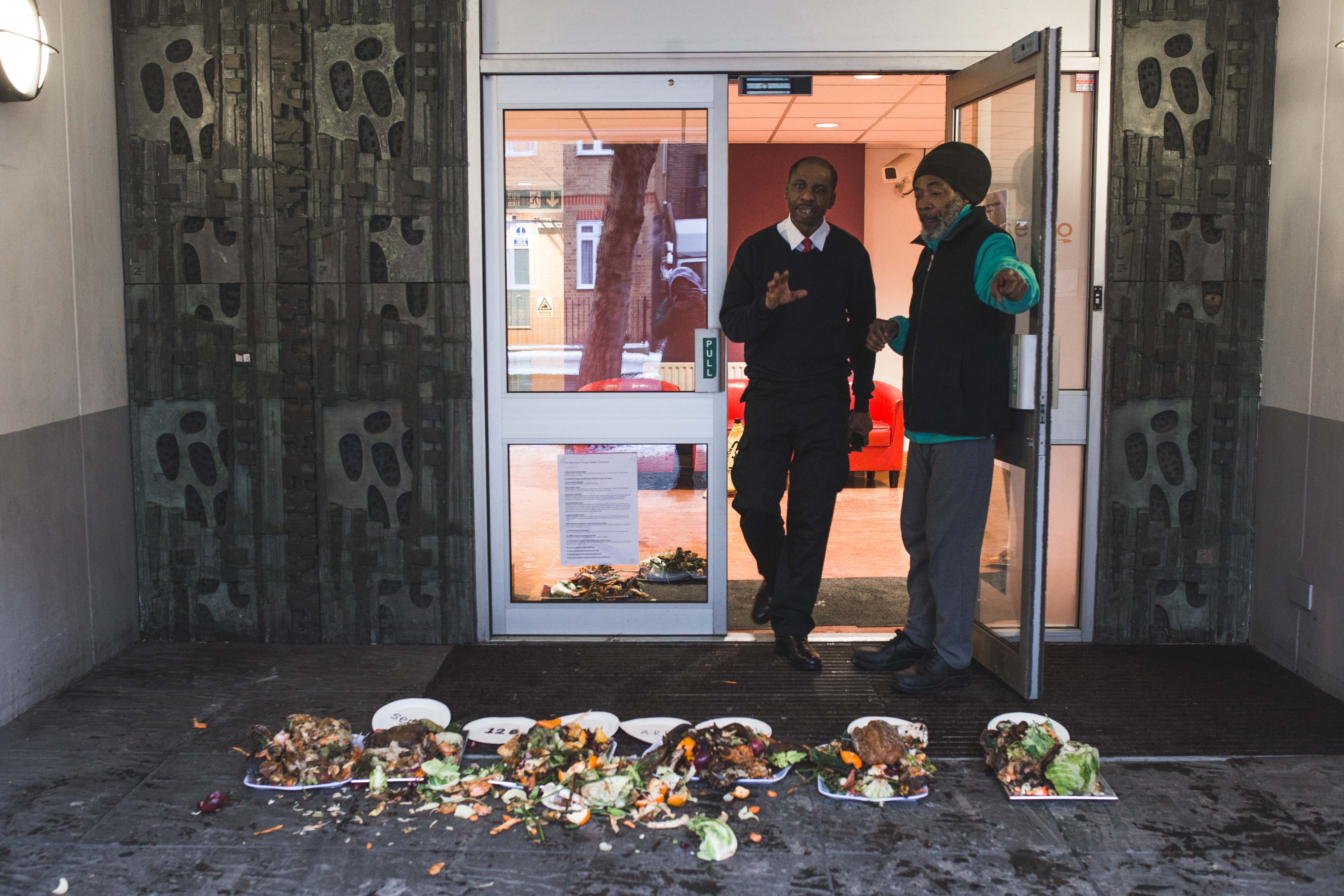 Around 30,000 people are detained in immigration detention centres each year in the UK, and Britain is the only country in Europe that has no specified legal time limit for detention. Many detainees are held for months or years with no release date. Detainees and campaigners say that detention is harmful and unnecessary.

Huck put the allegations that Serco were ignoring the hunger strike to the company. “We know which residents eat their daily meals in the restaurant and there is also a shop in the Centre where residents can buy food,” said a spokesperson. “Anyone refusing all food is closely monitored and supported with the professional healthcare team and their situation is kept under close review.” They added that an inspection in 2017 found there had been”progress” since their previous visit.

A detainee at Yarl’s Wood told the blog Detained Voices yesterday: “Serco officers just asked one of our strikers to go to the unit office to talk about her health and why she is not eating, while she was there they took her belongings and are deporting her.”

Linkedin
RELATED ARTICLES
OTHER ARTICLES
In the UK, Hongkongers are continuing to stand in solidarity with the pro-democracy movement.
From the queues outside to the last ones standing, Francesco Mellina’s new photo book follows a night that has gone down in the Northern-Soul history books.
In 1984, Martin Shakeshaft set out to document the miner’s strike as it really happened, using his photography as a tool for activism.
Photographer Melanie Nissen recalls capturing the characters, fashions and rarefied chaos of a rapidly-expanding set of punk bands who helped to redefine the genre.
While the popular news aggregation service has been kicked off Twitter, its demise does not spell the end of digestible misinformation.
From Brooklyn gang members, to Welsh miners and the residents of East Harlem, Bruce Davidson used his camera to shine a light on the most marginalised.