News & Politics / Activism / Could immigration detention centres in Britain finally be shut down for good? 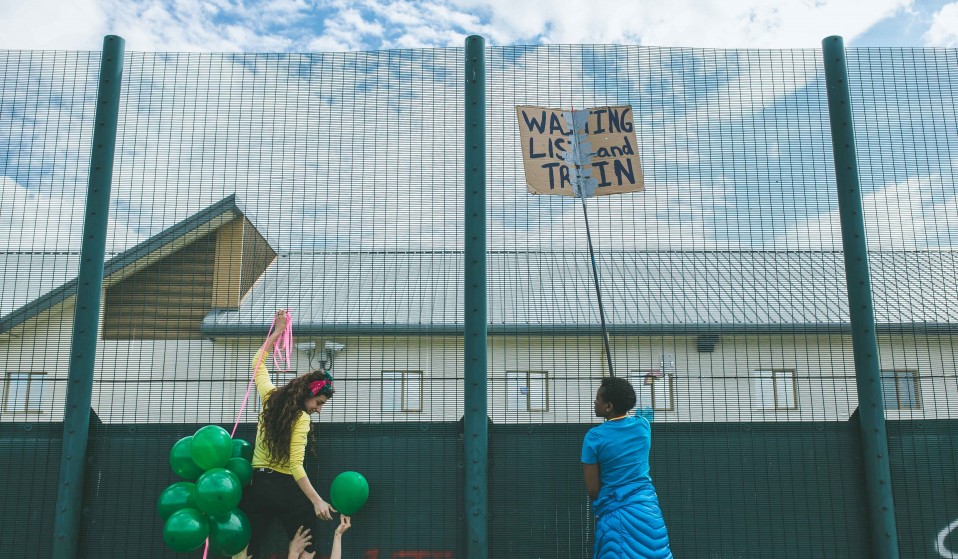 Up to a thousand protestors descended on Yarl's Wood Detention Centre on Saturday to demand the closure of prisons that lock up asylum seekers indefinitely.

Up to a thousand protestors descended on Yarl's Wood Detention Centre on Saturday to demand the closure of prisons that lock up asylum seekers indefinitely. The calls are growing louder, could their demands soon become a reality?

The British state has a rich history of dishing out abuse and violence, both overseas and at home. From the mass slaughter of the Amritsar Massacre to the institutional racism of the Metropolitan Police Force, those who are othered by not-so-great Britain have long been subjected to mistreatment and miscarriages of justice, and more often than not hidden it’s from sight.

And true to form, hidden deep in the idyllic British countryside, sits one of the most toxic tentacles of the modern British state. Just a few short miles from the town of Bedford, nestled away amongst luscious hedgerows and empty green fields, you’ll find Yarl’s Wood Immigration removal centre, one of fourteen such detention centres across the UK. 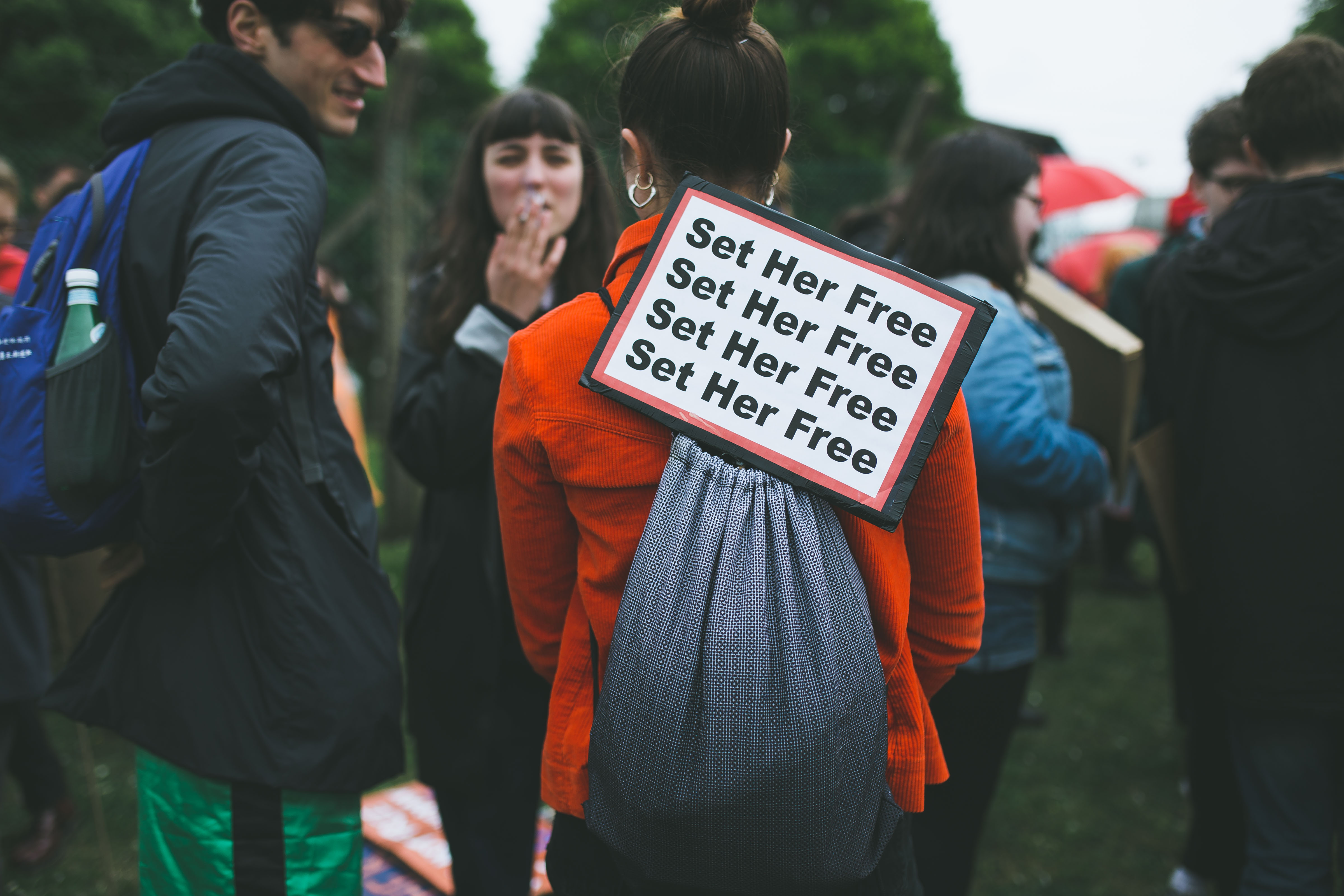 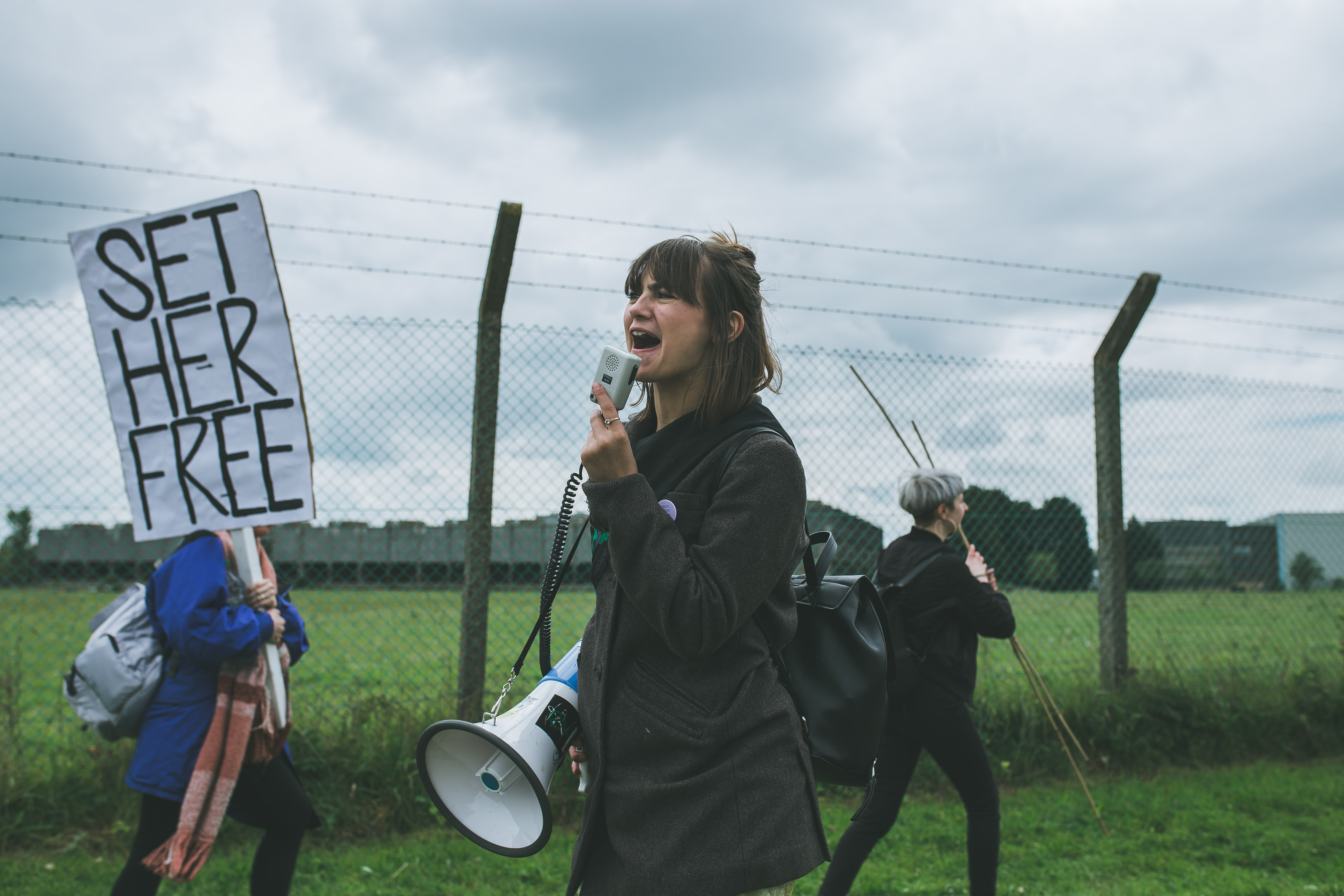 These quasi-prisons, often run by outsourced companies with little accountability such Serco and Mitie, have vulnerable asylum seekers and refugees locked away inside them. Those imprisoned are held without trial simply by virtue of the country in which they were born. Unlike in any other European nation, it’s deemed legally acceptable here to lock people up in detention centres indefinitely.

From here some people will be deported away from their communities to places in which they fear for their safety, others who are luckier will be released. Not content with stealing people’s liberty, inside the abuse women face is rife.

But immigration detention centres are on the frontline of a political battleground, the tireless work of campaign groups like Movement for Justice means their future is finally coming into question. 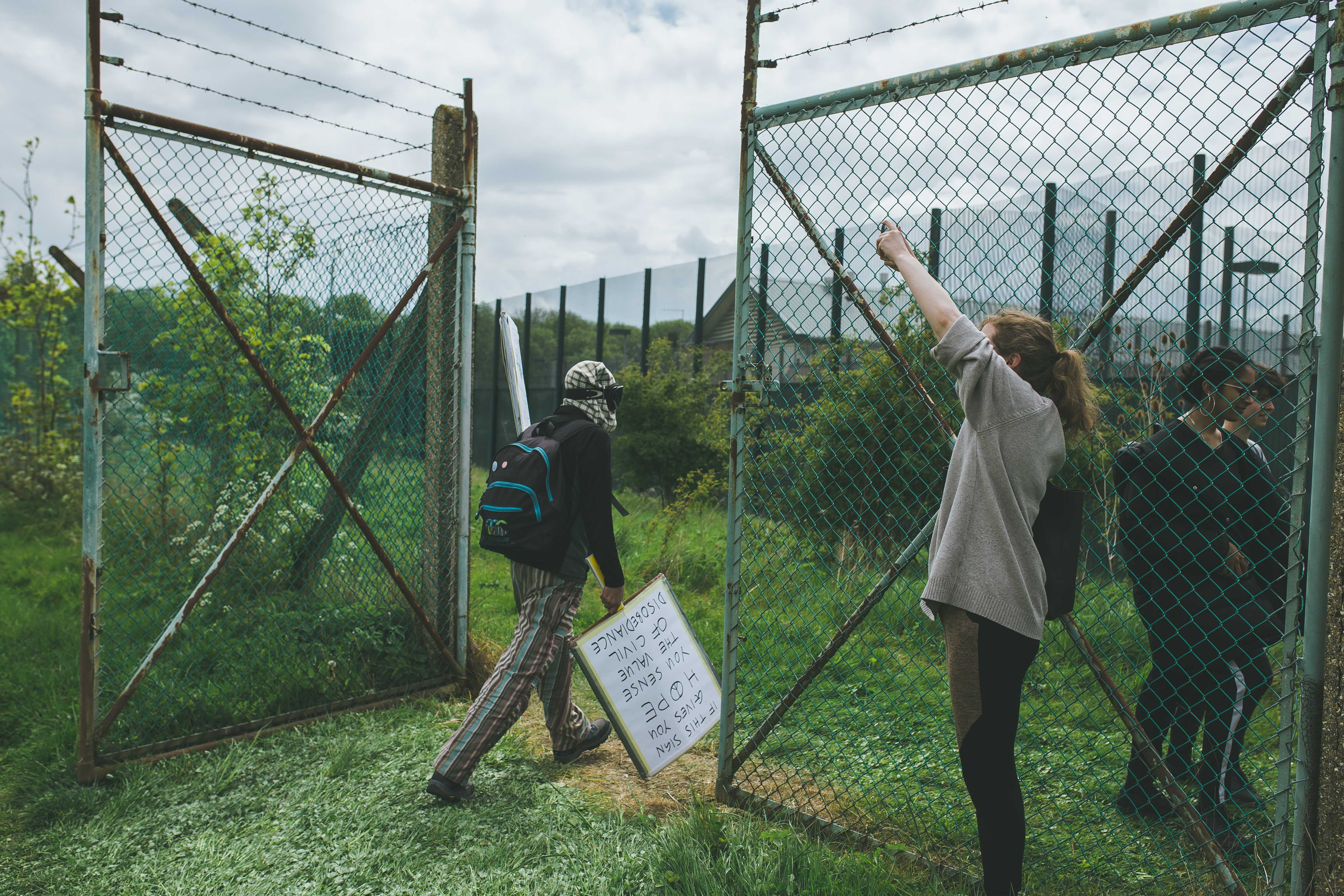 Pulling up in a car this Saturday near the industrial estate behind which Yarl’s Wood is hidden, it would be almost impossible to guess that just a few hundred meters away some 400 women are being held captive. Today though at least fifteen coaches line the quiet country lane, cops stationed a mile or so towards the town keeping track of who drives in and out of the area.

The government might well hope that these women remain hidden, but for years now activists, campaigners, and ex-detainees have been working tirelessly to ensure their stories are heard. Today protestors have one simple message, the crescendo of which is ringing louder each time they turn out to Yarl’s Wood and march: it’s time to shut these centres down. 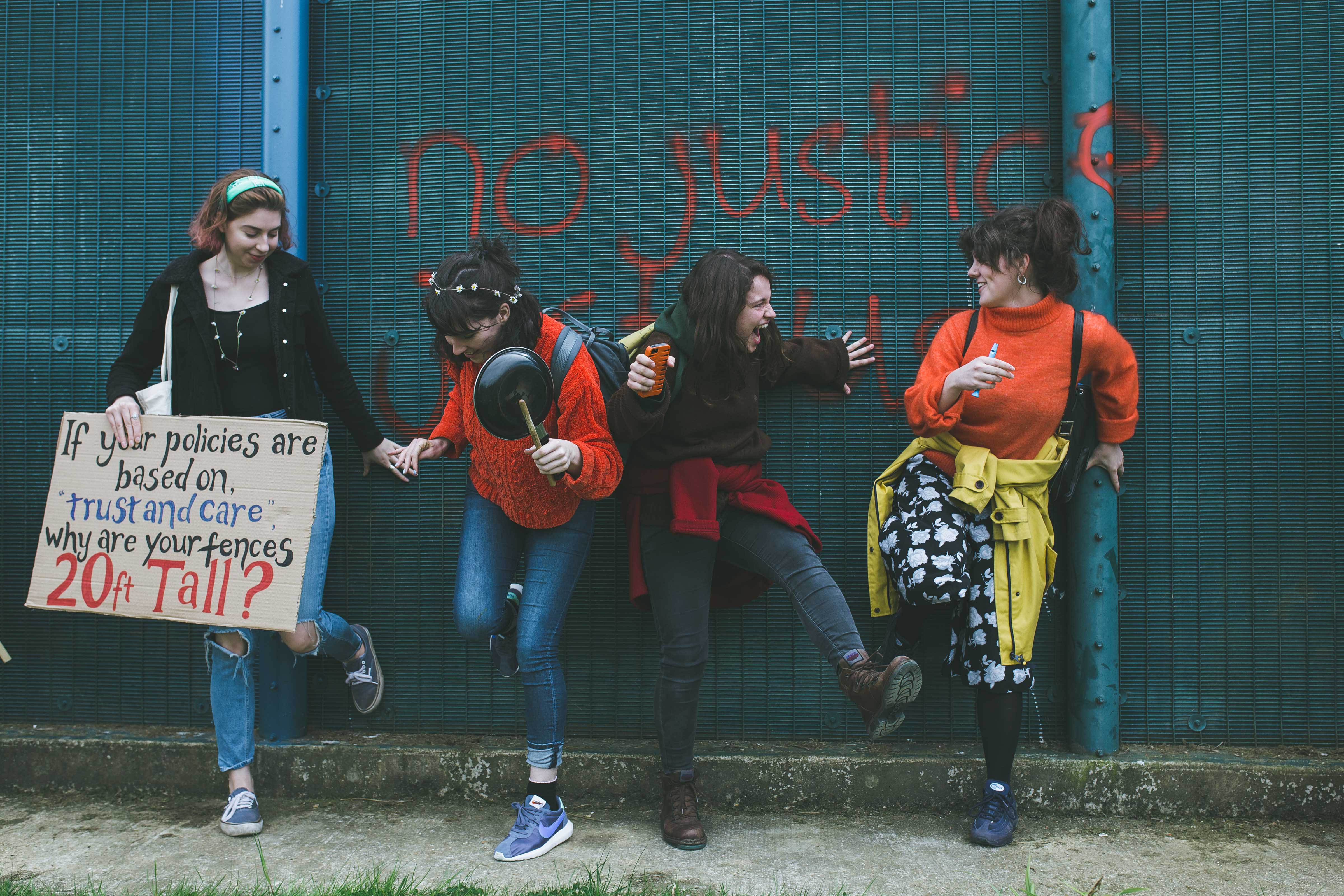 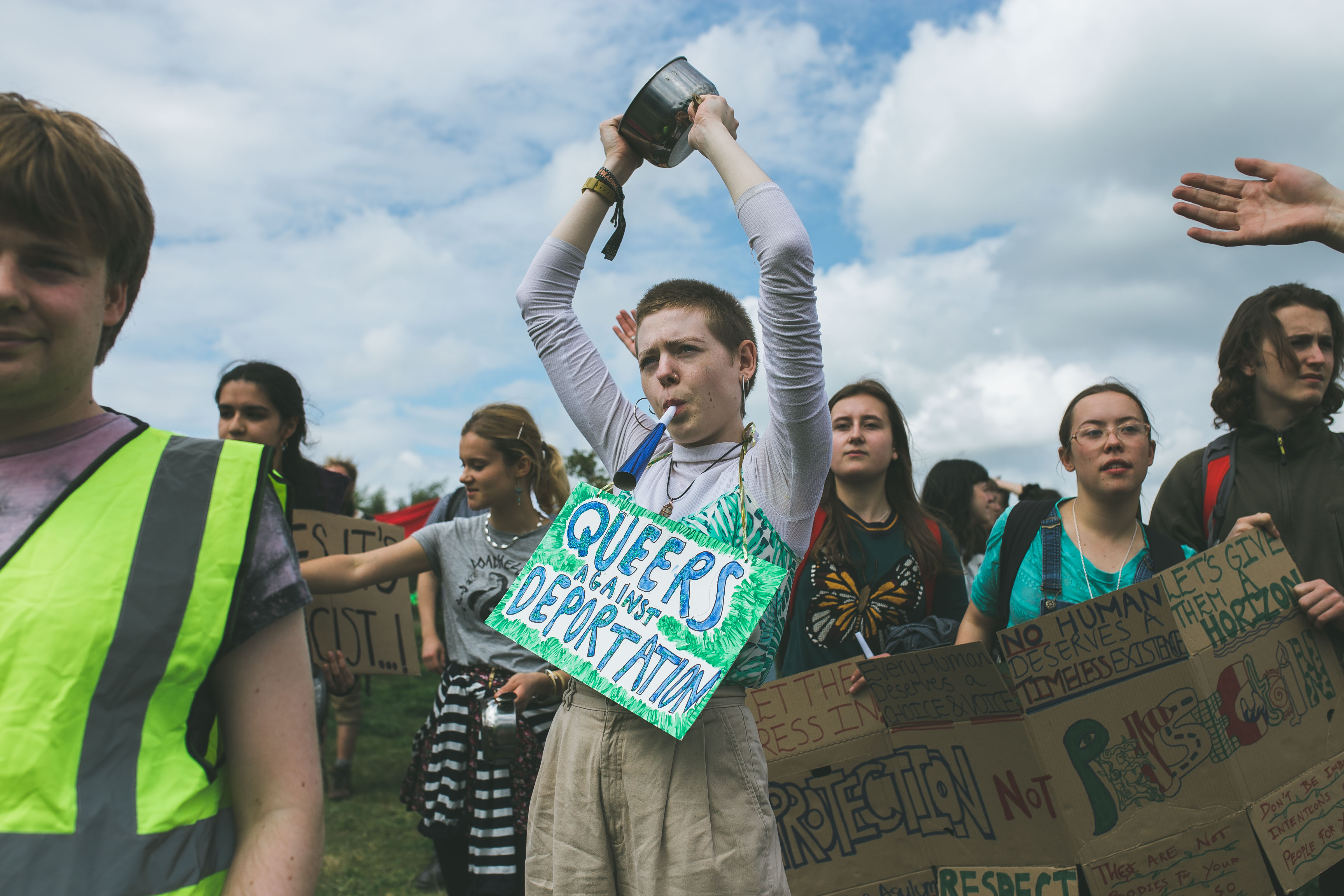 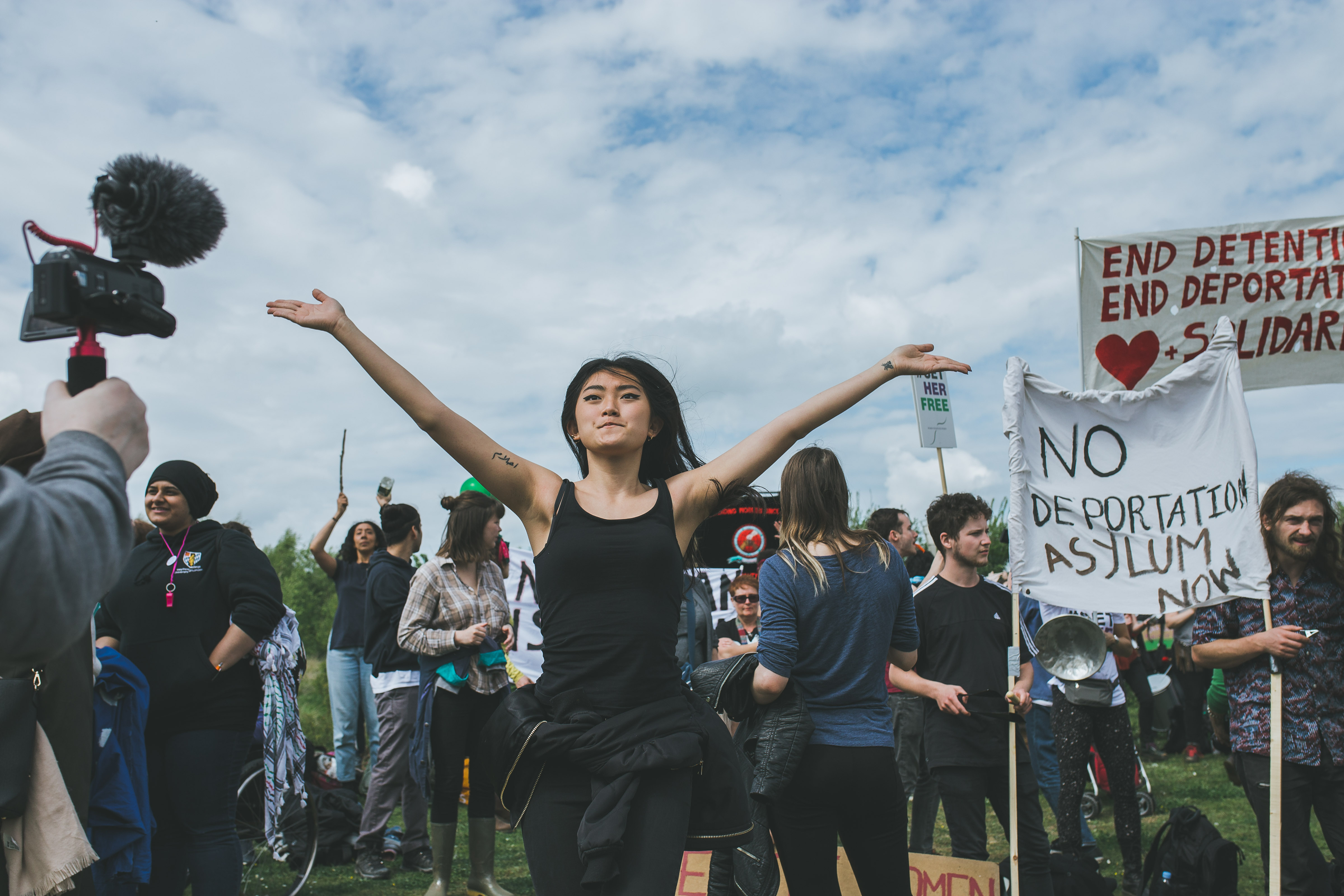 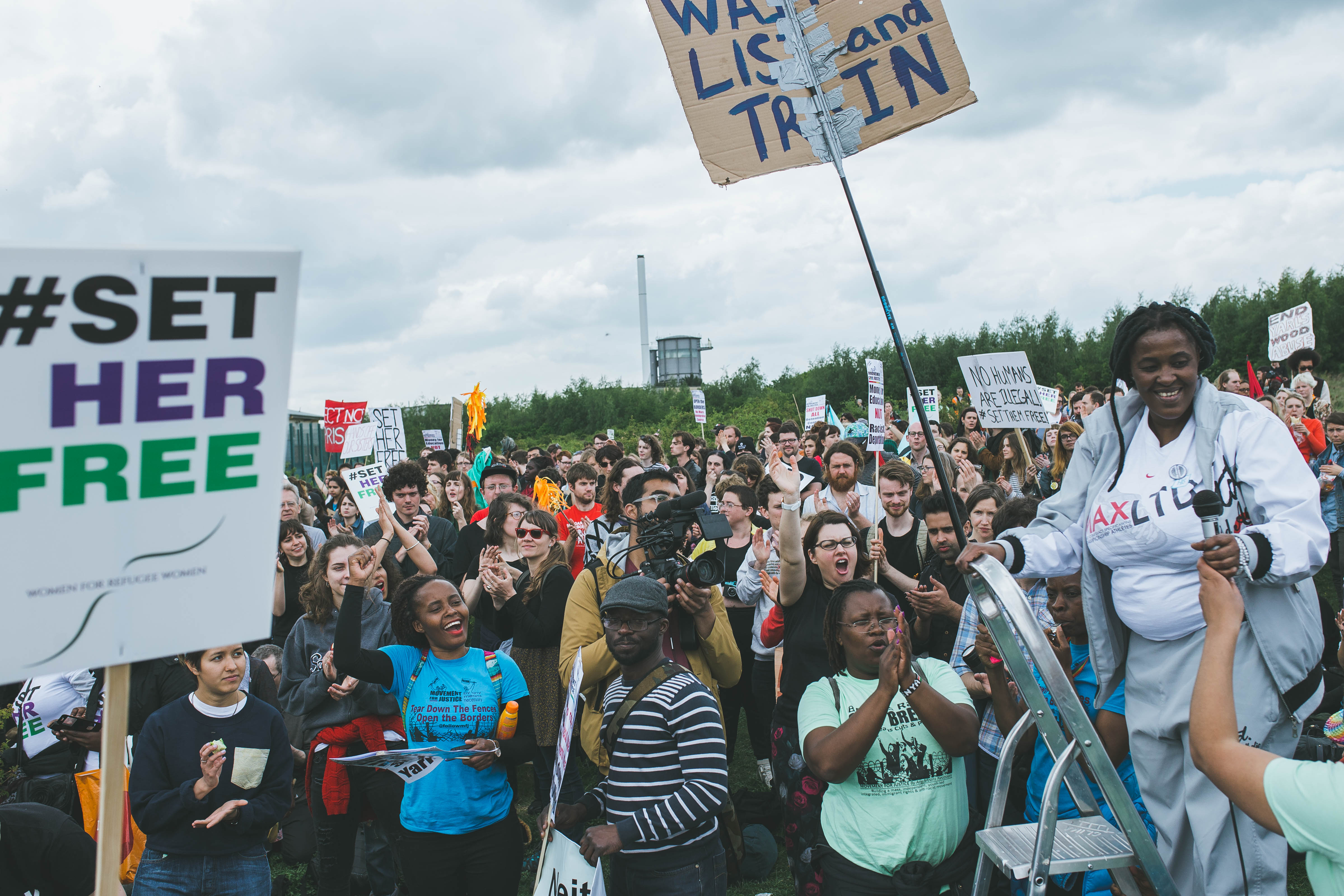 By 1pm the 1000+ strong crowd have started moving, gathering at the front of the compound the centre itself isn’t visible, instead there’s a 20-minute walk around the permitter through the surrounding fields to reach the destination.

In the past protestors have torn down the fences on the outer perimeter, it’s a small and easily scalable fence before the high-rise metal barriers slightly further in. It’s from here, opposite the fields flowering bright yellow, that women can see the protest from their windows, and from where their voices too can be heard.

With samba bands and chants echoing out today is no exception, but as the crowd reaches the back of the centre it’s clear a gate has been left unlocked. The security guards and managers clearly couldn’t be bothered to repair these fences, so a stream of placards and protestors make their way through, the police having negotiated for it to be left open. Yarl’s Wood is a for-profit business after all. 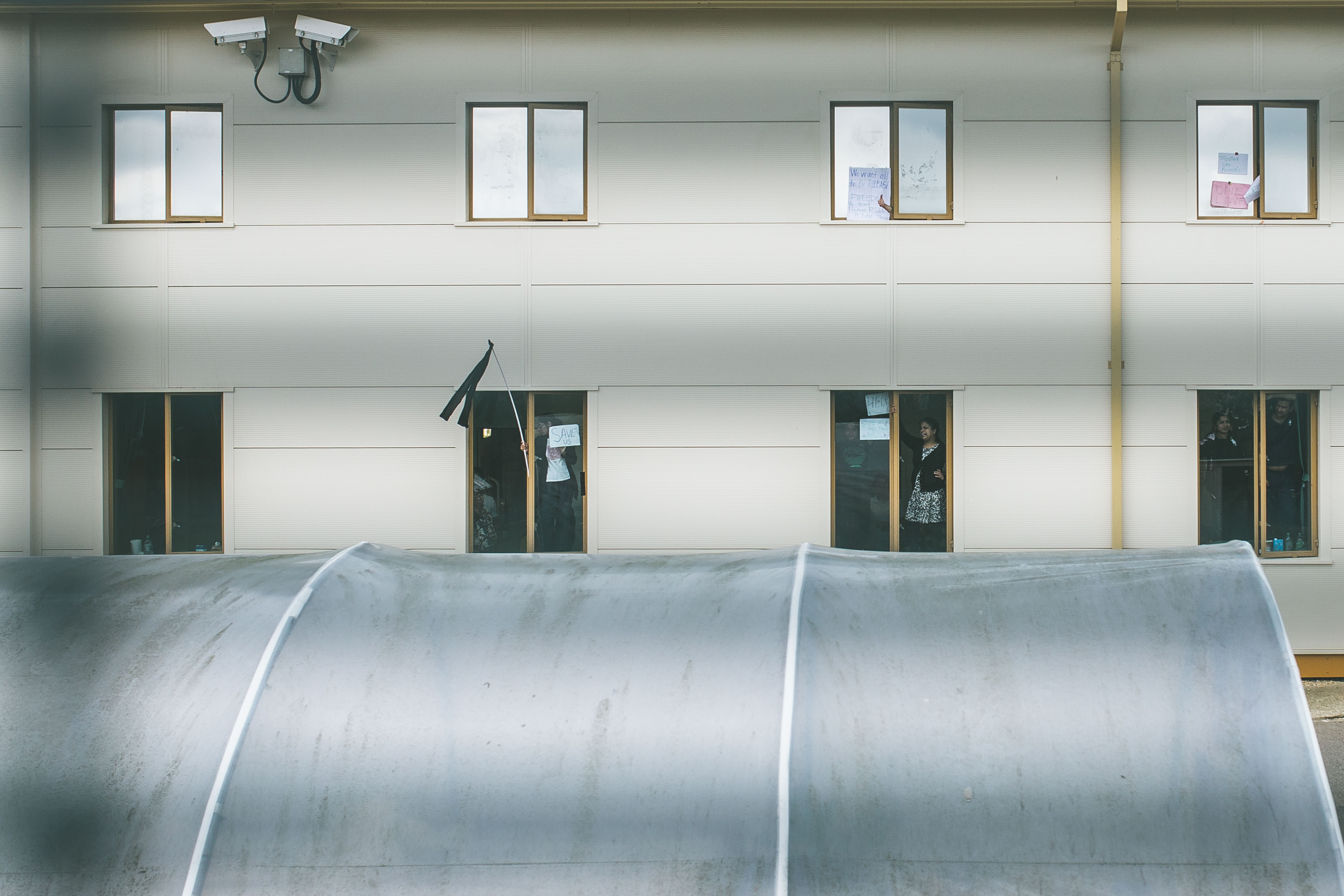 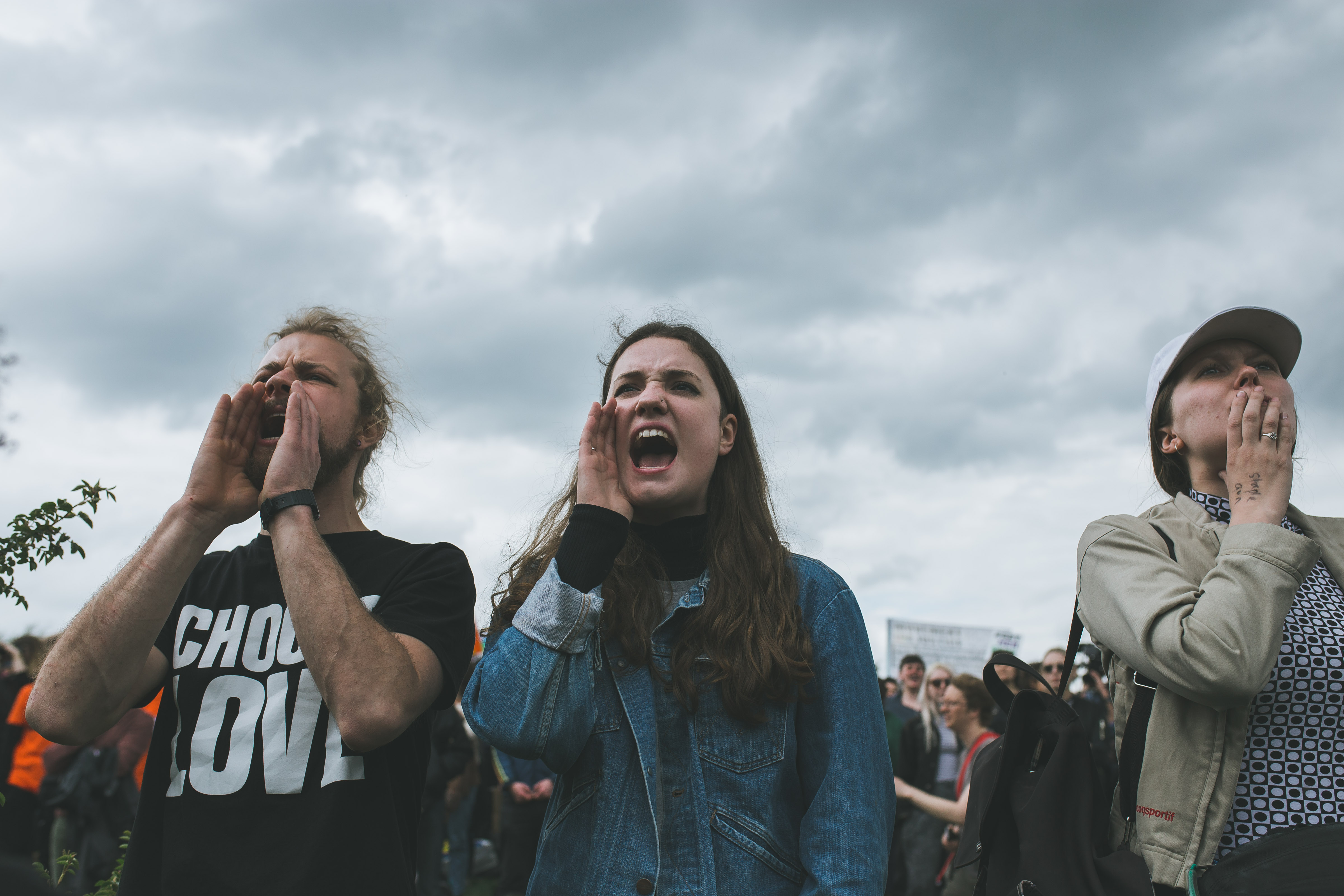 For the next few hours the barriers are kicked and graffitied, phone calls with detainees amplified through speakers while ex-detainees and campaigner speak from an impromptu stage. It’s hard to fightback tears as the distant desperate cries reach you.

“Sisters, hello my sisters,” shouts one woman vehemently, looking up to the faces listening from Yarls’ Wood’s windows. “I have come here with good news, I have come here to tell you don’t give up. Never give up, if you give up you have nothing to fight for.” Held in detention for almost three years, Mable Gawanas is back at Yarl’s Wood after just five days of freedom, she says she made the promise to return and fight and now she has.

“It’s hard inside Yarl’s Wood,” she continues. “We’ve been provoked, intimidated, we cannot speak out.”

“Mothers separated from children, disabled people not cared for who can’t care for themselves. Mentally ill detainees do not get the support and help. They are not professional people to deal with survivors of torture and rape.” 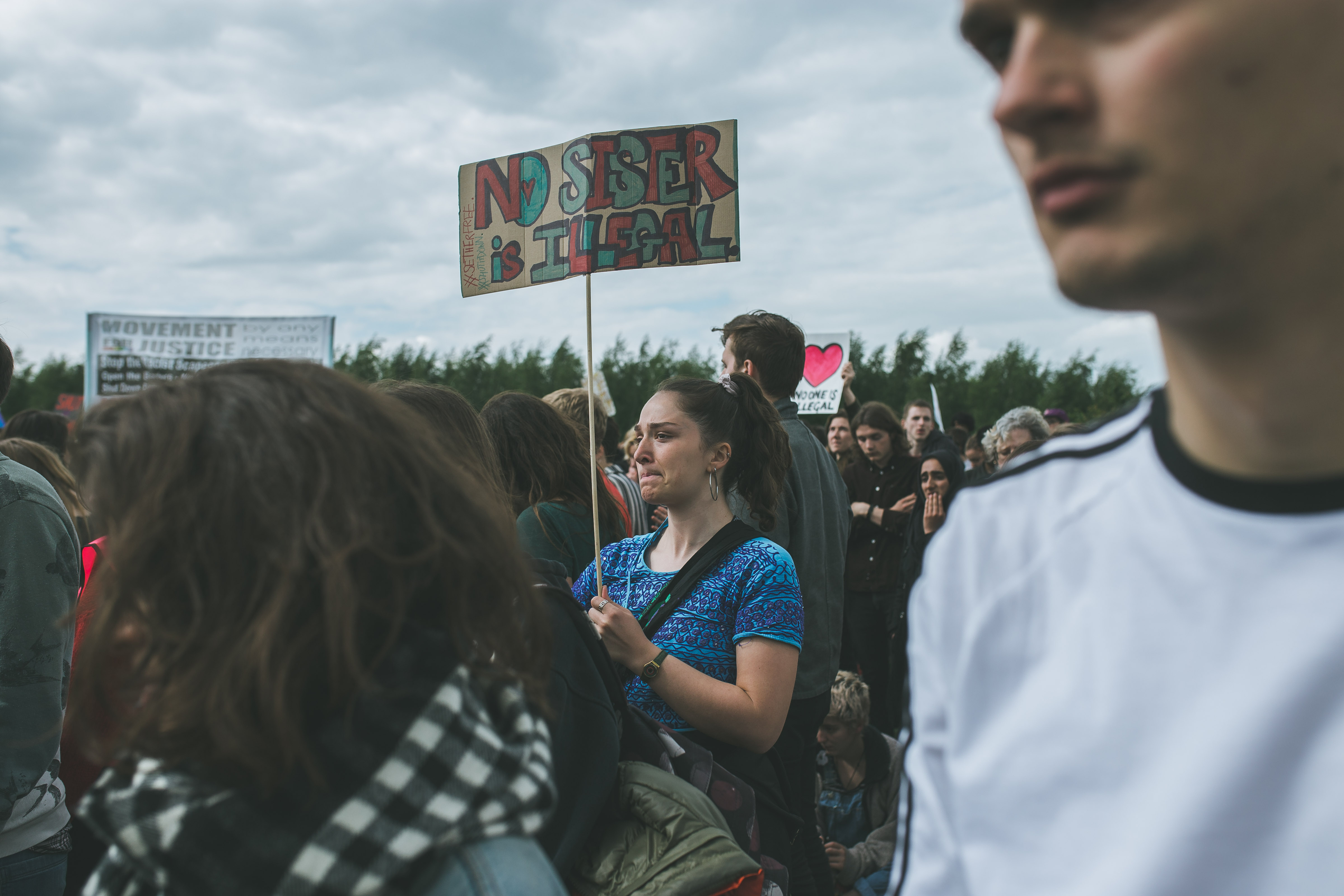 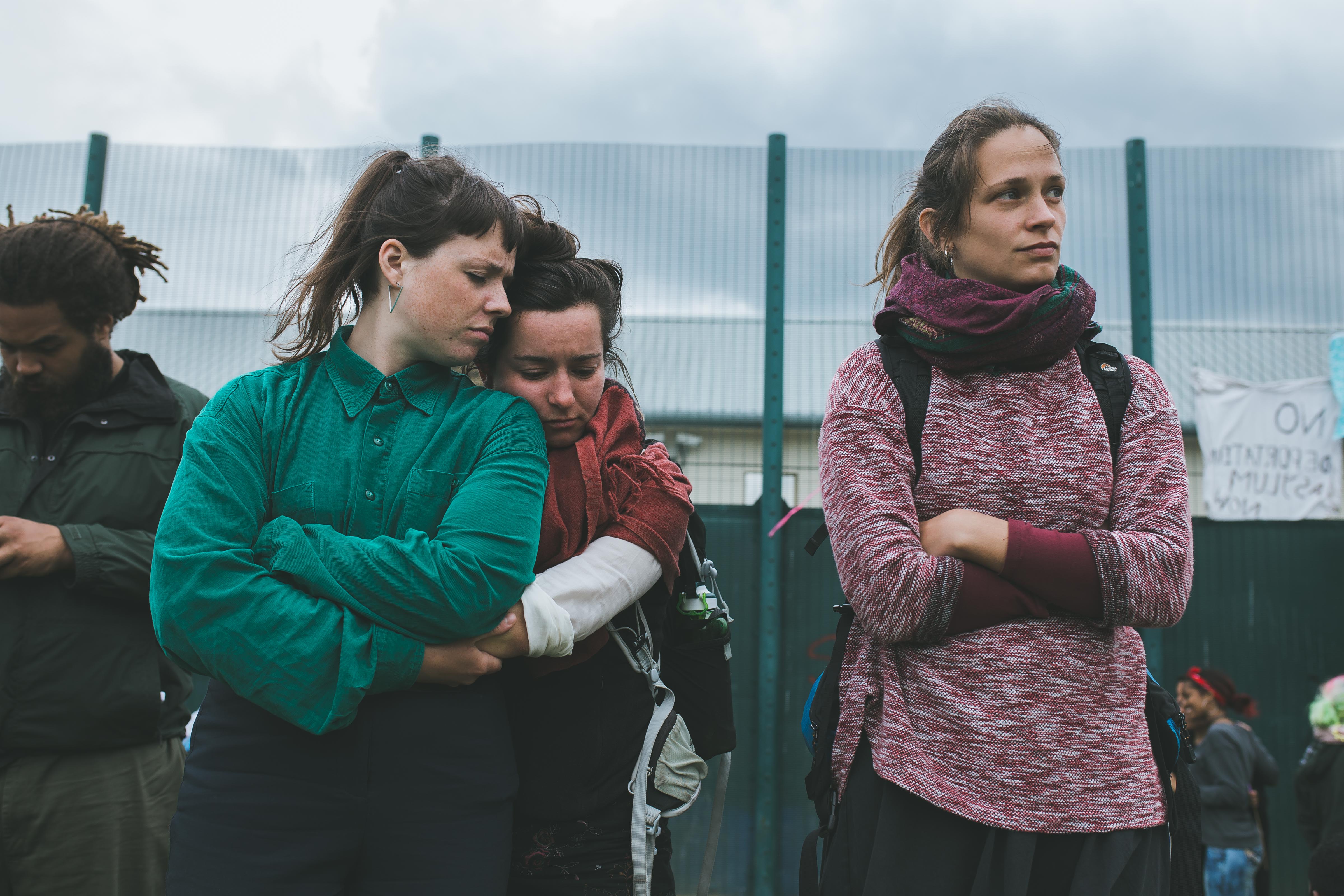 These protests are more than just opportunities to draw attention to the inhumane treatment these women are facing; they’re a real and urgent act of solidarity and support. Solidarity might well be a word that’s thrown around for too often, hollowed out with little substance or meaning at all. But just a stones throw away from where hundreds have gathered the women of Yarl’s Wood are locked inside, waving flags and signs that read “help us” from the windows.

Making it clear that these women, and those locked up in similar centres across the United Kingdom, are not forgotten is vital. Women like Mable Gawanas and the other ex-detainees I speak to make it clear it was in part these demonstrations that gave them the strength to carry on.

As the general election continues to dominate the headlines, before Brexit once again takes centre stage in the months that’ll follow, the women of Yarl’s Wood are locked up in limbo and waiting. Solidarity and support is all well and good, but these women shouldn’t need it; these centres should be shut down. 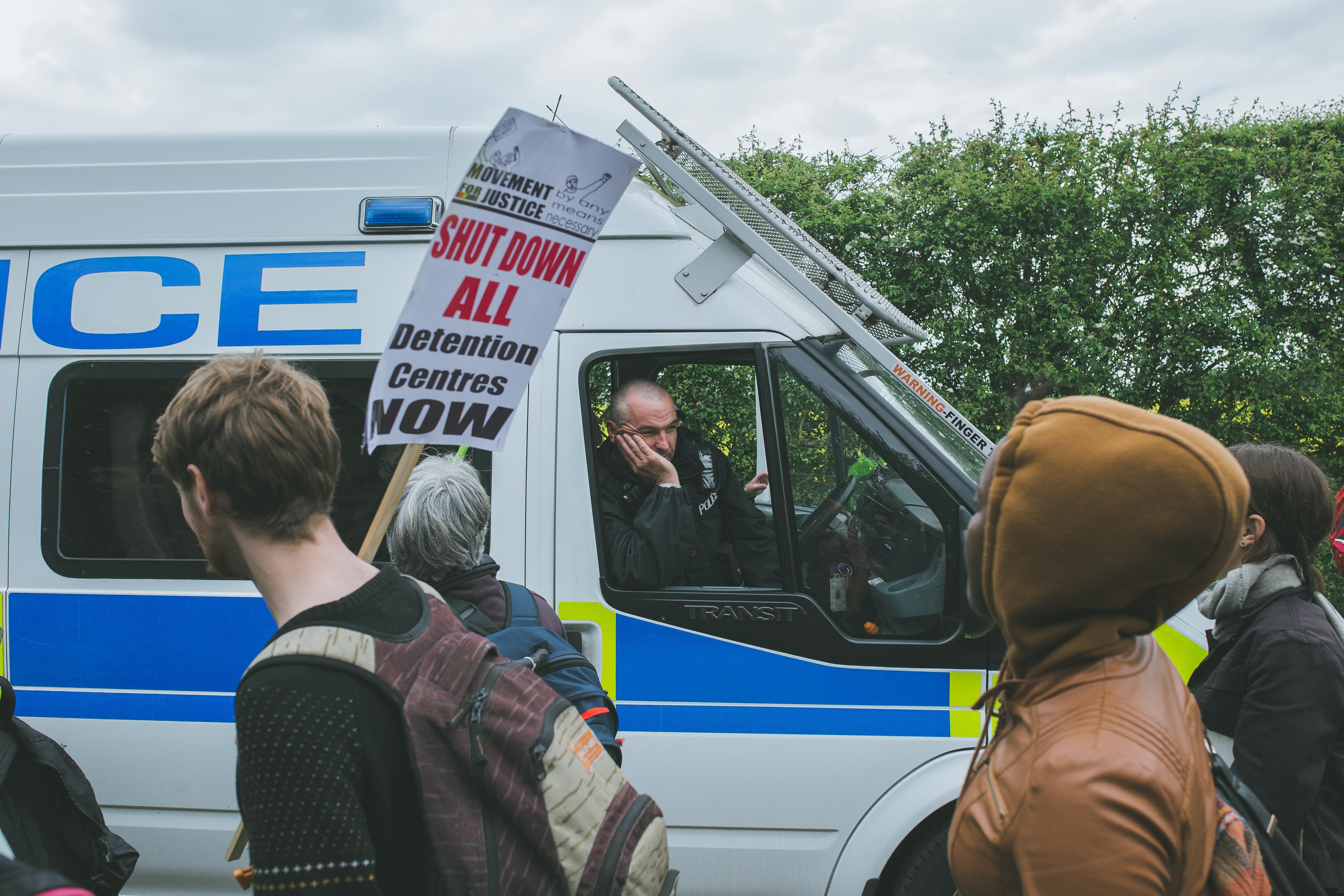 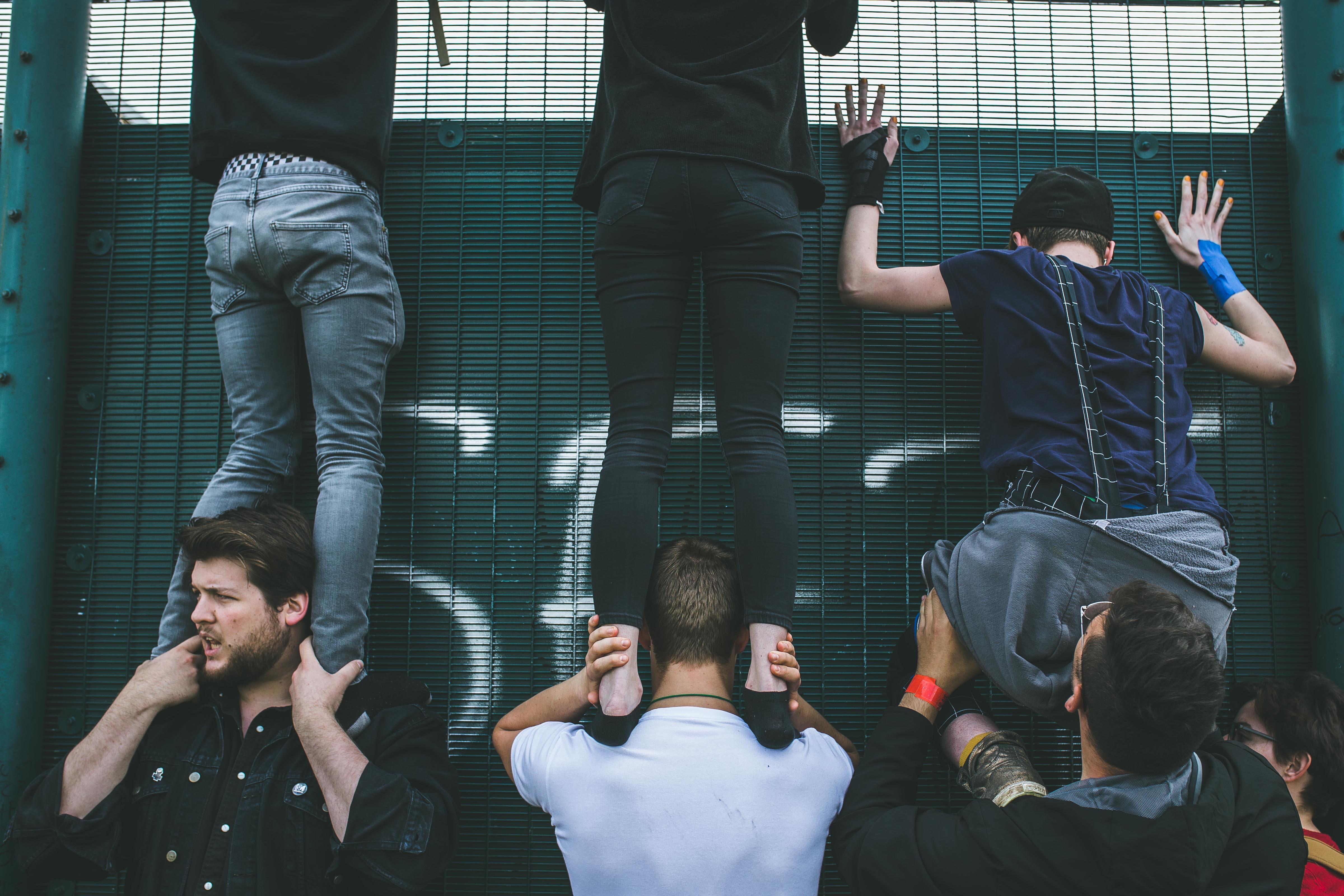 Back in July 2015, when fighting for the Labour leadership, Jeremy Corbyn said in an interview that immigration detention centres under a Labour government would be closed down, finally. Shadow Home Secretary Diane Abbot has regularly spoken out. Although it’s not known yet what will be in party’s manifesto it’s long been Corbyn’s line.

As Home Secretary Theresa May showed little compassion towards refugees and migrants in this country, as Prime Minister little has changed. Should May make it back into Downing Street on 8 June the resistance both inside and outside the Yarl’s Wood compound will no doubt continue, they won’t rest until the fences permanently fall.

Linkedin
RELATED ARTICLES
OTHER ARTICLES
After fleeing the war in Ukraine, people are finding it impossible to secure affordable and decent housing in the UK.
Mass crustacean die-offs in the North East have led a community of fishermen to take action to save their seas.
Jeffrey Henson Scales intimate portraits and protest images of the BPP and its leaders offer a rare insight into organisation at a time of societal upheaval.
Campaigners reflect on what the supreme court’s decision to allow buffer zones in NI means for the future of reproductive rights in the UK.
From snake handlers to mardi-gras revellers, Tom “TBow” Bowden’s photos provide a snapshot of the wonderful and weird people who make up America.
Taking us through one of the most dynamic years in recent history, Laylah Amatullah Barrayn new photo book contains tender yet confrontational portraits.