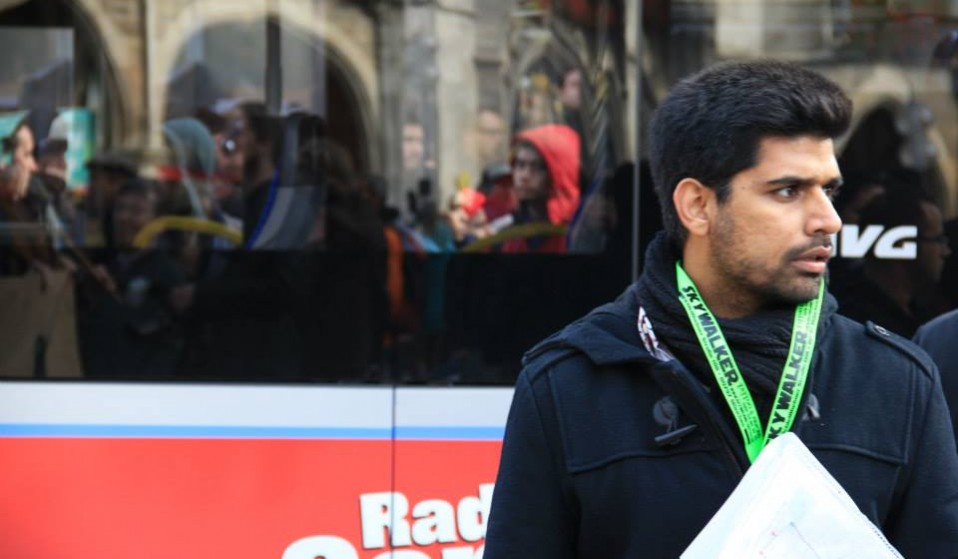 As founder of independent news network, AcTVism Munich, Zain Raza dedicates himself to providing the public with information powerful interests don’t want you to know.

As founder of independent news network, AcTVism Munich, Zain Raza dedicates himself to providing the public with information powerful interests don’t want you to know.

Ten years ago, 27-year-old activist Zain Raza was fully subscribed to the American Dream. Studying business in California on an international student scholarship, with aspirations to become a rich entrepreneur, his future looked set. However, after the financial crisis in 2007/2008, Raza lost his job as a library assistant and his scholarship wasn’t renewed the following semester.

Now living in Germany, AcTVism is Raza’s full-time job and he survives on income from freelance projects and casual part-time work. “I want to be able to reach a mass audience, inspire people to not just take information in, but to act upon it,” he says. “I want AcTVism to play a crucial role in providing the information and be an integral part of a social movement which could start applying public pressure to change the world.”

After losing his footing in California, Raza returned home to Germany, where Munich’s educational board decided he wasn’t qualified enough for the Abitur (Germany’s equivalent of A-Levels in Britain or a high school diploma in the US). While living on unemployment benefits and working part-time, he focused on reading and researching to find out, “why a person like me, who once had a scholarship in various subjects and a bright future in front of him, had been completely marginalised in society.”

Raza’s research and experience dramatically transformed his life goals. “I arrived at the conclusion that most mainstream media are very compliant as far as their coverage is concerned, and that facts are only examined selectively,” he explains. “As well as watching conventional mainstream media, like CNN and Fox News, I landed on YouTube channels like Democracy Now, the Real News Network and Truth Hour. I started realising there’s a certain spectrum of debate that the mainstream media possess.

“To find out what the mainstream press is doing, is to touch upon stuff that is left unsaid, that they don’t talk about. If you see a double standard that always serves certain sectors of society and if it’s aligned with current policy then you hit the jackpot. You know the double standard is most likely serving an economic and financial interest.”

Raza’s growing awareness of “how the system works” would inform his work with AcTVism, but early on it didn’t make for a sound state of mind. He became paranoid about being watched by the NSA while researching the shocking reality of the US drone programme. Learning “how the banks control the financial system, which controls the political spectrum” and seeing his inability to bring about immediate change led to immense frustration. Raza began to suffer from the psychological changes brought about by his enlightenment.

“The greatest challenges for me were finding a like-minded group of people, finding myself and fighting paranoia,” he explains. “How can I use this information, bring it out to people and be able to change something?” His analysis of foreign policy on radio and in Pakistan-based newspaper The International Herald sparked debate. This platform and the confidence it gave him, allowed him to organise demonstrations and further build momentum.

AcTVism Munich realised Raza’s intention of “providing a medium for alternative voices”. It ended a process of “approaching and understanding knowledge, facing a crisis during the understanding phase, and then eventually finding a solution,” he explains. “During the implementing phase, stuff started opening up. The ideas I was trying to bring into society to change it for the better started getting realised. We’re now at a level where I feel completely fulfilled with my life and I don’t feel that resentment that I had at the beginning.”

But what is the greatest lesson he’s learned along the way? “Empathy was a medicine for me,” he explains. “The more news and knowledge I read, the more empathetic I became towards the environment and other people. The empathy within myself grew to such a magnitude that I wanted to do something to improve the lives of others.”

Find out more about AcTVism.

Linkedin
OTHER ARTICLES
Writers Matt Foot and Morag Livingstone explore how four decades of collusion between the government and the police have slowly eroded our right to protest.
The revered showbiz chronicler recalls his journalistic beginnings, documenting subcultural scraps in the ’80s.
The situation in Afghanistan remains dire, with many groups facing persecution at the hands of the Taliban.
With their latest capsule collection, SCRT have constructed their own mythology, based on the story of a fictional meteor shower that hit a small Scottish town.
Over the weekend, London locals came together to resist a pre-planned police raid targeting delivery drivers.
A group of Ukrainians living in Poland are helping Ukraine withstand Russia’s brutal invasion by buying supplies and shipping them directly to the war’s frontlines.