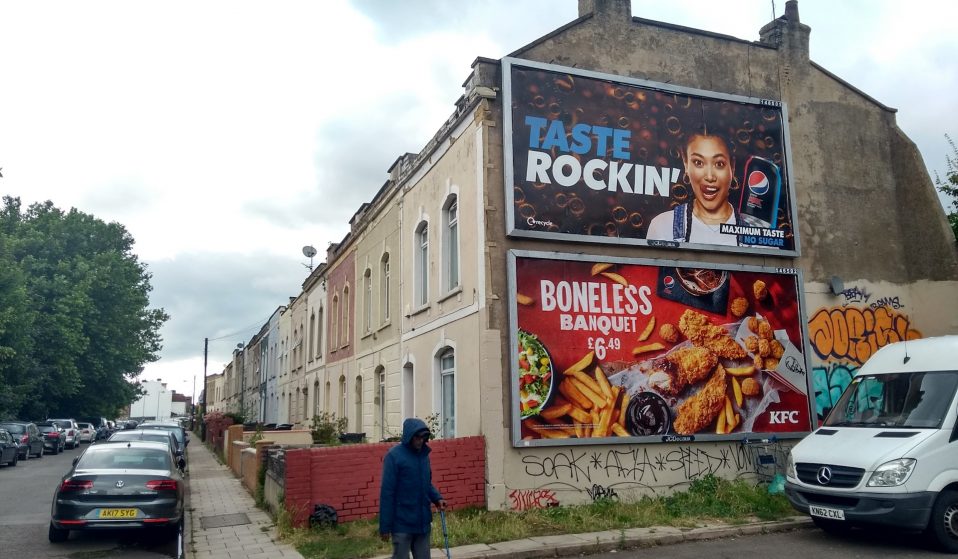 Anti-ad organisers are imploring people to take action over what they want their neighbourhoods to look like.

With large digital ad screens on the rise, anti-ad organisers are imploring people to take action over what they want their neighbourhoods to look like.

The term ‘out-of-home advertising’ – industry speak for media such as billboards – has taken on a bitter irony for some Bristolians. Several residents living near the M32 complain that the glare from the digital billboards near the motorway enters their homes, even disturbing their sleep, and makes the area feel like an “unloved industrial wasteland”.

Polly Whight, a resident of Easton, Bristol, has ads from a large digital billboard beaming into her bedroom at night. “It glares a lot through my window – if my curtains are open a little bit, I can see the colours of it flashing, reflected on the wall,” she says. “It’s very intrusive. It just brings my whole mood down – it’s really dystopian.” 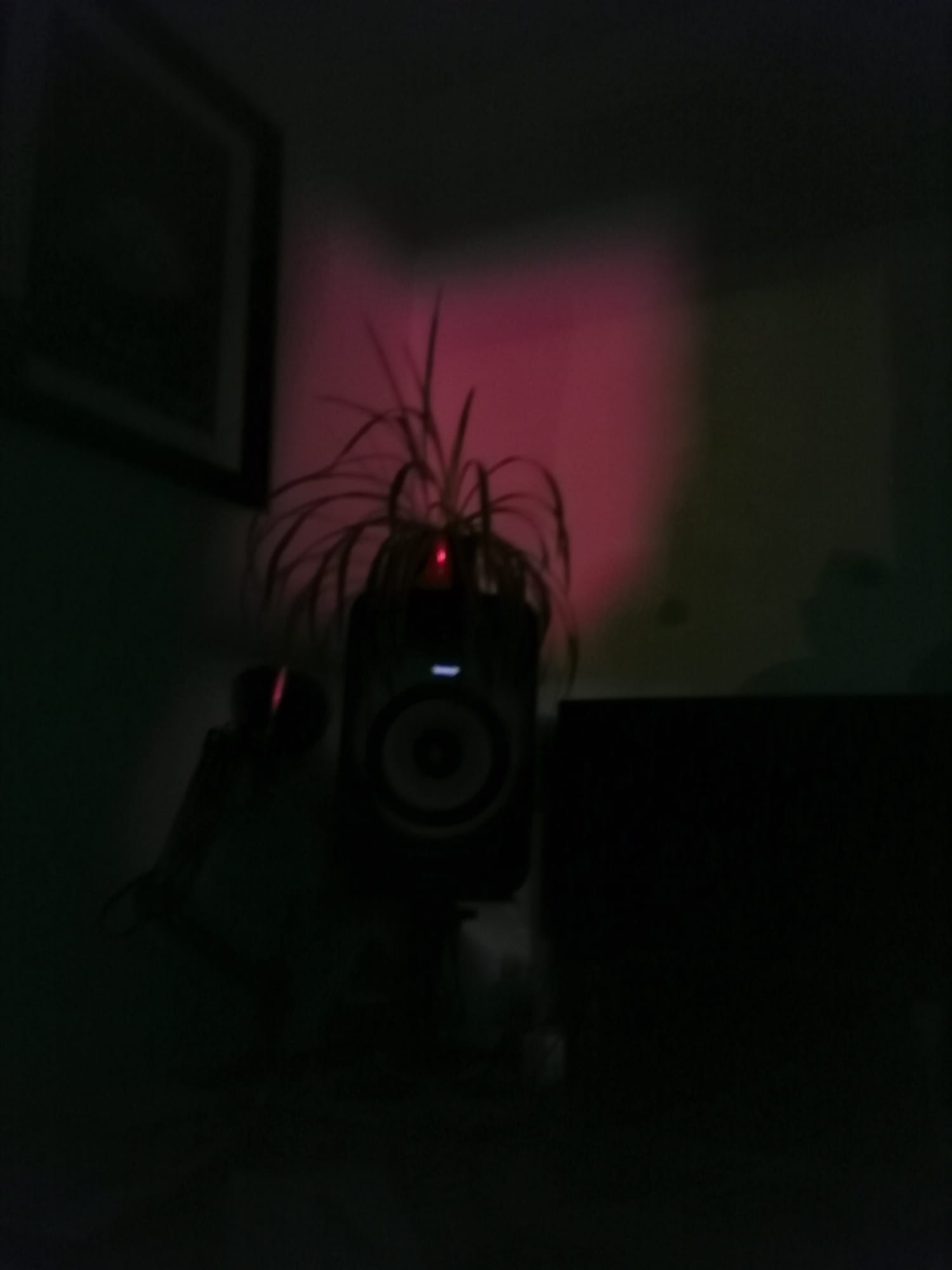 Whight, 40, was one of around a hundred residents to offer testimonial to the city council at the end of last year calling on it to take down two large billboards adjacent to the road. The testimonial – which included complaints relating to light pollution, mental health and the degradation of their area – is just one example of how a group of organisers are encouraging people to take action over what they want their neighbourhoods to look like.

Adfree Cities, a group pushing for a reduction in the amount of outdoor advertising, started as a small collective in Bristol. Since the organisation was co-founded by Robbie Gillett and Nicola Round in 2017, it has blocked scores of advertising frames from being installed and established branches in cities including Cardiff, Birmingham and Leeds, as well as two in London. For Gillett, 35, the “critiques of corporate power” of subvertising in the 1990s and early 2000s were hugely influential.

“Big brands [had made] everywhere look the same,” Gillett says. “I’d grown up in Croydon [and seen that] we could do a lot better than the cultural offerings made available from McDonald’s, KFC and Virgin megastores, and every town looking the same.”

The number of digital advertising frames in the UK – not just billboards, but also the kind that flicker at bus stops and the ad boards breaking up pavements – has approximately trebled since 2015, according to Route Research. The outdoor media analytics company, which caveated the figure by saying its inventory covers about 95 per cent of ad screens in the UK, said there were 12,283 digital screens in December 2021, compared with 3,367 in September 2015. Analogue ads still make up the vast majority of out-of-home advertising (OOH), and the rise of the electronic ad frame, comes as the number of non-digital advertising frames decline. Tim Lumb, the director of Outsmart, the trade association for UK OOH advertising, says that the number of large paper billboards has fallen from to around 12,000 from 30,000 two decades ago.

Digital ad frames and billboards are at “the most objectionable end” of the advertising continuum for Gillett. He thinks the transition from analogue frames is making people increasingly aware of the might of corporate advertising. “The advent of large new digital screens becoming more prominent in our cities is causing people to sit up and go, ‘God that is really too much’,” he says. “[Advertisers are] engaged in an arms race for our attention, to figure out new ways to scream louder and brighter.”

According to Gillett, ads for “big brands [with] really bad reputations for environmental damage and human rights abuses” peppering streets are more than eyesores. They are “the visible face of the economic system [of] globalisation and neoliberalism,” he says. In this sense, as well as a fight for more democratic use of public space, ad blocking pushes back against “being constantly told to buy more stuff, to support infinite economic growth on a planet with finite resources”.

Unsurprisingly, the OOH advertising industry had a bad pandemic. Lockdowns and plummeting footfall meant that revenue was down 46 per cent in 2020 compared to the previous years, according to Outsmart. Revenue is not expected to return to pre-pandemic levels before the end of 2022, according to the same body, a recovery that the Advertising Association forecasts will be driven by digital OOH formats. But just five per cent of all advertising spend goes on OOH, compared with a staggering 60 per cent online and 20 per cent on TV.

So why the focus on physical ads? “We focus on outdoor advertising because of how it intersects with issues of public space,” Gillett explains. “And as the outdoor advertising industry itself likes to brag, it’s the only medium you can’t turn off. You don’t have a choice whether you interact with a billboard … whether you’re just walking to the shops to buy some groceries or to take kids to school.”

One year on from its formation, Adblock Lambeth is one of the network’s most active groups. Camille Aboudaram, the group’s co-founder, says it exists to embolden people to take action in shaping their local area. “The problem is people don’t realise they have a say in the public sphere in their neighbourhood,” Aboudaram, 32, says, explaining how the group monitors the council’s planning portal to mount objections when ad screens are proposed.

“People are more and more concerned about advertising,” Aboudaram adds. “We also hear from people who are already full of anger toward corporate advertising but don’t know what they can do about it.” The group’s tactics also include flyering, engaging residents in discussion and pushing for a local ban on ads for several product categories, including those involving high carbon emissions, on council-owned ad frames.

A ban on adverts for junk food, alcohol, gambling and payday loans has already been implemented by Bristol city council on its advertising sites, but nationally, the  outdoor advertising industry remains far less regulated. Amy Finlay, PhD student at Liverpool University, says her research in Middlesbrough, one of the UK’s most deprived areas, shows around a third of food adverts on bus shelters were for unhealthy products barred from being advertised on children’s TV.

“There’s a real need for research showing that advertising outdoors has the same impact as advertising on TV,” Finlay says. “Because of less research, there’s a lack of policy.”

The advertising industry argues that key OOH players operate energy-intensive ad frames on renewable energy and that its success offers huge financial benefits. According to figures provided by Outsmart, advertisers pay UK transport authorities and local councils almost a quarter of a billion pounds annually in rent and business rates. But the anti-ad activists take issue with the industry’s claims of social contribution, particularly where harmful products incur hidden costs.

“By and large, the profit is accrued into private hands,” Gillett says. “The question we need to ask is what [are] the costs that the council has to bear. So if those advertising screens are promoting products, like SUVs or airlines, exacerbating the climate crisis – who covers the costs of those impacts?”

Both Gillett and Aboudaram see the issue as inherently political. “For me, it’s primarily about having a more democratic space and hearing everyone’s voice,” the Lambeth-based organiser says. The emergence of the Adfree Cities network in 2020 coincided with a flurry of engagement with local areas as mutual aid projects blossomed during  lockdowns, as well as the advent of policies like low traffic neighbourhoods (LTN) and London’s ultra-low emissions zone.

“Our anti-billboard work and public space campaign sits well with those movements,” Gillett says, pointing to “the absurd irony” of billboards being used to advertise cars to motorists who are stuck in traffic.

Together with her neighbours, Whight is awaiting a decision on whether the screens will go. “They don’t think about how people feel that live around it,” she says from her home in Easton. “Money is always a priority, isn’t it?” The removal of the screen would improve the area, she says, but there’s something more to it: “We would feel listened to”.

Linkedin
RELATED ARTICLES
OTHER ARTICLES
The author discusses her new memoir, which offers a sobering reflection on the racism and otherness she’s experienced along with a joyful celebration of her culinary heritage.
A series of photos by the late Jerry Dantzic taken in 1957 show a tender side to the iconic Jazz musician.
With the Women’s Euros in full swing, last week saw glorious, sweaty celebrations take place in a dedicated, safe space for female and non-binary fans.
To mark the premiere of his new documentary on surfing giant Gerry Lopez, the filmmaker and former pro skateboarder sits down to share his unique brand of wisdom.
Yesterday, rail workers came together to protest poor pay, working conditions and job cuts in their latest round of strikes.
Ahead of the release of his new album, the producer reflects on his battle with drug use, getting into painting and what Madonna taught him.