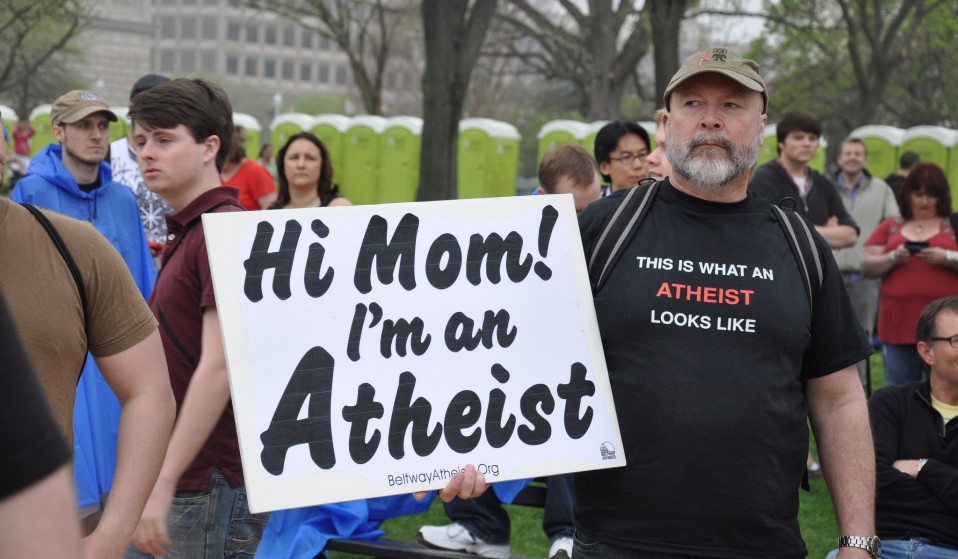 To tackle the stigma of being an atheist in the US, a controversial billboard campaign is urging non-believers to 'come out' about their views.

To tackle the stigma of being an atheist in the US, a controversial billboard campaign is urging non-believers to 'come out' about their views – and embrace Christmas as a cultural holiday that can be enjoyed by anyone.

Billboards have been popping up across the US this week with an eye-catching message: ‘Make Christmas great again… skip church!’

It’s part of a campaign by American Atheists, one of the country’s largest secular groups, to provoke conversation in places like Colorado, Virginia, Georgia, Louisiana and South Carolina.

That trail crosses right across the Bible Belt – an area where the organisation believes that atheistic perspectives aren’t being heard.

If that sounds like a guaranteed way to spark controversy, you’d be right. One display in Monroe, Louisiana caused enough backlash that the billboard company asked if it could be moved elsewhere… within an hour.

But the audaciousness of the plan is backed up with a conviction. American Atheists feel that there are countless non-believers out there who keep their views to themselves, leading to isolation.

(One in four Americans aged between 18 and 29 do not affiliate with any religion, according to a recent study by the Public Religion Research Institute.)

So at a time of year that can feel particularly lonely, the idea behind the billboards is that no one should feel like a fraud or a hypocrite for celebrating what is essentially a cultural holiday.

“Having a meal with your friends and family, giving gifts, watching Christmas movies, relaxing after eating too much food – most of that has absolutely nothing to do with religion,” says Nick Fish, National Program Director at American Atheists.

Nick is a civil liberties activist who got his start working on Obama’s 2008 election campaign in North Carolina.

Gradually he realised that a lot of his issues with politics were rooted in the role that religion plays in policy making, be it LGBT issues, abortion rights or climate change.

So Nick set about tackling that by getting people to talk about what they believe and why, generating what he sees as more enlightened thinking.

Do atheists feel maligned in particular parts of the country?
Based on what we’ve found – both from anecdotal experience and survey data – atheists are viewed as untrustworthy for a lot of reasons.

Young people are kicked out of their house or lose their scholarships to a Christian school if they change their beliefs – these are things that happen all the time. We’re not talking about hypotheticals here.

One of the things we’re trying to do with these billboards is to say, ‘Hey, we’re just like you: we’re part of the community; we’re teachers, firefighters, police officers who pay our taxes and everything else.’

One of the best ways for that to happen is for people to be honest and open with their families about the things they believe and don’t believe.

What are the most common misconceptions about atheists?
We get people calling us ‘devil worshippers’ all the time, which is interesting. It’s like, ‘You guys know that the devil is part of Christianity, right?’ [laughs]

We also get a lot of people asking us, ‘Why do you hate God?’ I mean… I don’t hate unicorns just because I just don’t believe in them. There’s this misconception that we’re angry. We’re not.

I think you lead a more fulfilling life if you live in a version of reality where you’re not threatened with eternal damnation for wearing mixed fibres or being in a same-sex relationship.

We have better things to do with our time than worry about what we think a fake guy from 2,000 years ago wants us to do.

We’ve moved past the religious morality on so many issues that we should continue to that, continue to set aside the frankly ridiculous things that are in the Bible and in the Qu’ran and every other holy book.

Don’t be tied down to the notion of what makes a good person. Too often in this country ‘good Christian’ is code for ‘good person’, when in fact no religion has a monopoly on that.

A billboard by American Atheists

What do you think makes this such a difficult subject in the US?
People put religion on a pedestal too often and say that it’s above criticism. If you don’t believe in science, then your ideas are going to be criticised – it doesn’t matter how you got them.

‘Because my religion doesn’t say it’ doesn’t excuse you from not understanding evolution or climate change or being a bigot to LGBT people.

Us saying your ideas aren’t that great or that some of your beliefs are a bit ridiculous – that’s not oppression. Oppression is trying to use the government and the legal system to take people’s rights away.

We’re not saying you can’t believe ridiculous things. That’s the great thing about living in places with religious freedom. What we’re saying is that the government shouldn’t be propping up your beliefs.

So in terms of starting a conversation, what is it you want to say?
Quite frankly, at the most basic level, a great starting point is ‘Hi! We exist.’

People think they’re alone. I can’t tell you how many messages we’ve received saying, ‘I had no idea there was a group of atheists out there.’

So asserting our existence is a pretty good place to start but it’s also important to say, ‘I’m the same person you thought I was before you knew I was an atheist.’

A common perception of atheists is that they’re arrogant or elitist. What’s your best way of addressing that?
I think scientists get this a lot. ‘Oh, you arrogant scientist! You think you have the answers to everything.’ In fact what we’re saying is that we don’t have the answers.

We don’t believe in the gods people have told us about because we don’t find the evidence compelling.

The idea that the entire universe was created just for us, that there’s an all-knowing, omnipotent being who cares about whether or not you shave your beard or eat shellfish – that, to me, seems pretty arrogant.

We’re not convinced – that’s all. I’m open to evidence. That’s what being an atheist is all about: opening your mind to evidence and not just believing what your parents believed.

Is there anything else you want people to know?
In the US, atheists face a lot of stigma. It comes from all sides of the political spectrum. We had presidential candidates – Ted Cruz – saying that anyone who doesn’t pray every morning isn’t qualified to be president. Marco Rubio said that faith in the creator is the most important value.

On the democratic side, we had staffers from the DNC contemplating using Bernie Sanders’ perceived lack of religion as an attacking point. He’s not even an atheist.

So this is something we need to continue working on and the single best way to do that is for people who don’t believe anymore to just come out and say it. Use the a-word.

Linkedin
RELATED ARTICLES
OTHER ARTICLES
Jamel Shabazz’s photos honour those who were lost and those who survived one of the most brutal eras in recent history.
A new photo series documents tribes preserving the environment through simple, sustainable practices in central Asia.
After a devastating fire, creatives in the city are coming together to call for more affordable workspaces.
Following the release of their third album, the duo talk collaboration, family and connecting with the dead.
After being subject to racism growing up, Kavi Pujara’s photo series allowed him to reconnect with and reimagine his hometown.
The campaigning charity are on a mission to increase inclusion, participation and representation of Black people in trail running.