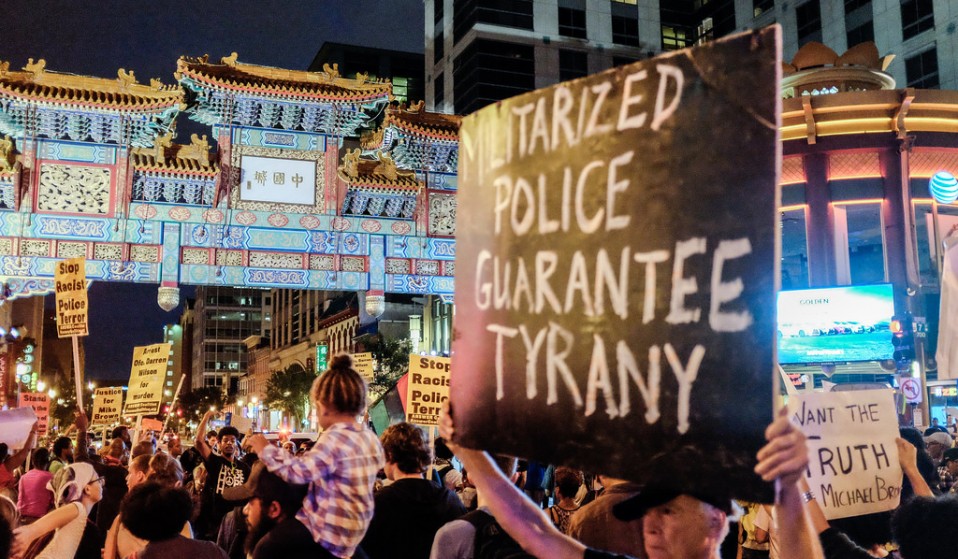 Trust in American police is at a 22-year low. Now Senior officers are exploring if unarmed officers could challenge a culture of institutional brutality.

Trust in American police is at a 22-year low. Now Senior officers are exploring if unarmed officers could challenge a culture of institutional brutality.

America’s faith in its police force has dropped to a 22-year low. In an age of camera phones and high-profile protests, it has become harder for heavy-handed or violent cops to avoid scrutiny over their actions. Today just 52% of American’s express confidence in the police, a low not recorded since 1993: the year after officers who were filmed beating Rodney King were acquitted, sparking the 1992 LA riots.

Conscious of the suspicion many citizens now hold for the police, some officers themselves have begun to question the behaviours seemingly ingrained in cop culture. In early December, police officials from several American states descended on the small Scottish town of Tulliallan as part of a lecture series on the benefits of policing without the use of guns. There was a mixed response. According to the New York Times, several officials reacted with surprise and scepticism to claims that unarmed policing is at all possible without endangering police officers themselves.

For many international observers, the gun-toting aggression of American police can be baffling. Although the threat of terrorism has made some call for an increase in armed officers, UK police on patrol are routinely unarmed. They only call on armed squads in rare instances where back-up is needed. A spokesperson for the National Police Chiefs’ Council told Huck, “The British model of policing has always relied on close links between the public and the police, from neighbourhoods upwards. Minimum use of force is a vital part of that relationship.”

It’s a noteworthy distinction. Whether it’s always successful is up for debate, but British police forces were founded on the idea of policing by consent and at least aspire to work in partnership with the general public. Their American counterparts, by contrast appear to prefer an unflinchingly authoritative stance. 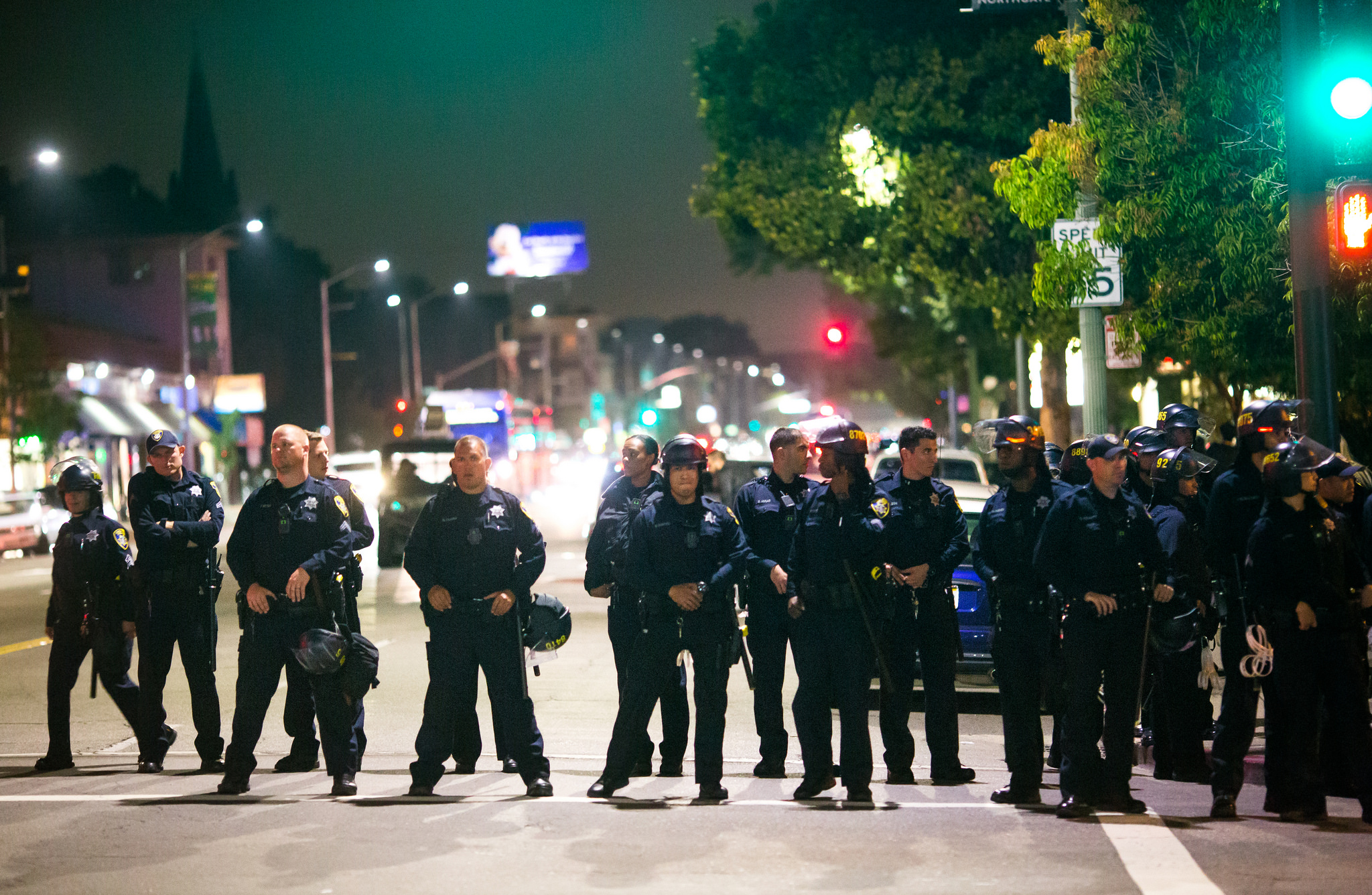 In Scotland — where 98 percent of police officers do not carry  guns — American officers asked how they could ever withdraw the use of guns, while tackling a populace armed to the teeth with them. A Catch-22 scenario it would seem. Speaking to the Guardian, Ohio State psychology professor Brad Bushman argued a culture of guns can’t help but create an echoing culture of violence. “Weapons increase all of those aggressive thoughts, feelings, hostile appraisals and the type of thinking that somebody’s out to get you, or wants to hurt you.” Statistics show states with the most guns subsequently have the most gun-related homicides.

One unexpected roadblocks to tackling institutional police brutality is machismo. Speaking at a 2015 policing conference, and reported by the New York Times, Dallas police chief David O. Brown claims young officers see any form of retreat as a sign of weakness. “Sometimes it seems like our young officers want to get into an athletic event with people they want to arrest,” he said. “They feel like they’re warriors and they can’t back down when someone is running from them, no matter how minor the underlying crime is.”

American police officers are trained overwhelmingly in technical aspects of the use of force, but very little when it comes to the psychological. Or how to use empathy and reason to subdue an individual as opposed to exploiting brute force. This attitude can lead to incidents like a homeless disabled man alleged to be creating a scene being pulled down and pinned to the ground by five armed men, as caught on video in August – rather than calmly spoken to.

David C. Couper is a police chief turned pastor based in Wisconsin, whose blog Improving Police regularly discusses ways to reform the force. He told Huck, writes on his site, “America is a violent society with too many guns and too much fear of terrorism since 9/11 and the invasions of Iraq and Afghanistan. It’s deeply affected our nation’s police.”

Couper believes the key to improving relations between police and citizens is by approaching situations with a softness as opposed to a confrontational, reactionary rage. He also suggests repairing the image of the force through a shake-up of its ethnic make-up. While the number of non-white police in the United States continues to rise, they still make up just 27 percent of local police officers when they account for 37% of the population. He says, “Demilitarising our police from that of a warrior mentality to being protective guardians committed to saving lives and unconditionally respecting all persons will go a long way toward solving the contagious disease of violence. Along with controlling the possession of firearms, and assuring the civil rights of everyone regardless of class, gender, race, or immigration status. Add to this educated, committed, and ethical police leaders and it may be solved in my lifetime.”

Couper writes on his site, “We unknowingly fell into a system of criminal justice in America that has become oriented more toward domination than problem-solving, more toward arrest and incarceration than prevention and treatment.”

There is a problem at the heart of police ethics in the United States but police chiefs aren’t burying their heads in the sand. With trust in the police at a 22-year low, the question now being asked by many in charge is how to reform and move forward.

Increasing diversity, police chiefs continuing to look at progressive procedural forces for guidance and soul-searching on the part of officers themselves, is leading to gradual change. Many officers welcome the shift in culture towards focus on compassion and protecting citizens, away from implementing brutish, violent forms of justice.

Whatever bright ideas can play a part a part, figures indicate how urgently change is needed: in the UK, police have killed 55 people in the UK since 1980, while police in the United States have killed 1147 in 2015 alone.

Linkedin
RELATED ARTICLES
OTHER ARTICLES
This afternoon, workers of the hospitality chain came together to call for better pay and working conditions.
A campaign seeking to prevent future injustices where there is state involvement is gaining momentum, with Labour recently pledging its support.
Hackney Bumps is a DIY sanctuary in the heart of East London, home to a thriving diverse community of skateboarders – and beyond.
Ireland’s national sports are modernising. At the forefront of this movement is Na Gaeil Aeracha, the country’s first ever queer GAA club.
The demonstration took place this week over plans to slash £50m from arts bodies in London.
We sat down with trans comic Jordan Gray to discuss the power of portraying complex characters, giving humanity the benefit of the doubt and getting naked on live TV.