News & Politics / Activism / As a postie, I have no choice but to strike 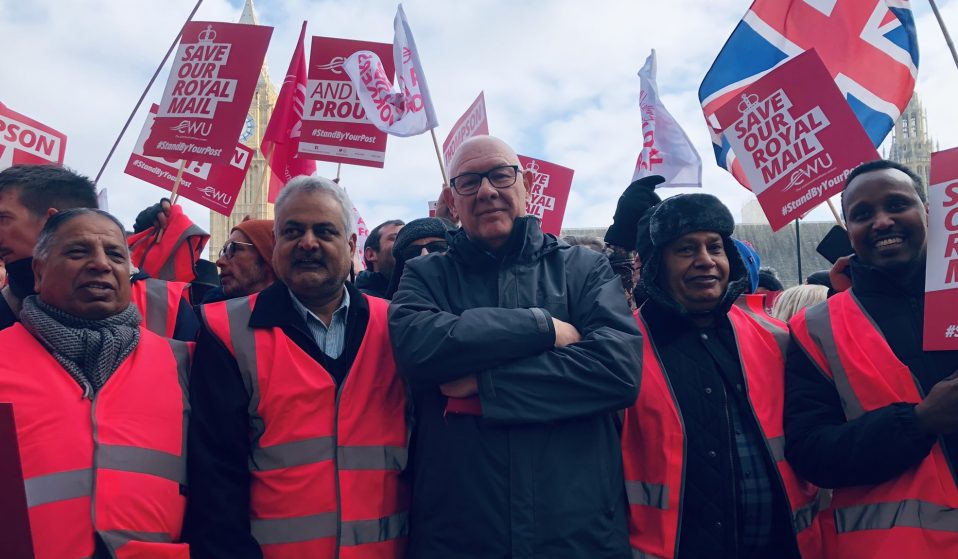 Postal worker Danny Coulter explains how poor pay and working conditions have pushed posties to take industrial action – and why they need the public’s support.

Postal worker Danny Coulter explains how poor pay and working conditions have pushed posties to take industrial action – and why they need the public’s support.

As Christmas inches closer this week and everyone starts feeling the festivities, I’ll be trying my best to ignore my WhatsApp going off with mates bombarding me to get to the pub. Instead, I’ll be getting in some early kip to get up for picket line duty at 5am, because I’m a Royal Mail worker and, alongside 115,000 of my colleagues, I’m going out on strike on Friday and on Christmas Eve.

Nobody goes out on strike for any daft reason, and I believe the reason why we’re striking is clear: we will not just roll over and accept the complete destruction of our livelihoods. The proposals offered by Royal Mail’s senior management represent a completely inadequate pay rise that is far beneath inflation – and the changes they want to make to this workforce are changes that nobody with an inch of self-respect would ever accept.

Royal Mail is turning into an Uber-style service, propped up by bogus self-employment and involving less workers with less rights doing much more work for much less money. They want to reduce sick pay to the governments’ standard statutory sick pay scheme – the worst in Western Europe. They’re trying to bring in technology to monitor us every minute of the day; to abandon long-held start and finish times by moving to an annualised hour system instead (a complete trojan horse for casualisation); and bust our union, which has held far too firm for these current CEOs’ liking.

In short, they want my rights on the job to evaporate overnight, and this is no hyperbole – you can tell they really mean business in their war against us. They’ve threatened us with mass redundancies if we keep on striking, bullied us with trying to dock our pay if we’re sick, meanwhile managers are being offered an absolute wedge to try and break our effective strike. They are putting some of the most intense strain on us for the simple reason that we believe that stable, decent work should still be a thing in this country, not just for my generation but for everyone.

As postal workers go on strike to secure a decent living, who owns Royal Mail?

Privatisation has transformed a public asset into a revenue stream for major investors and private equity companies like Vesa Equity. pic.twitter.com/kx4eXhFWh2

Obviously, we do not want to strike at Christmas. All of us will be affected by the serious disruption in the same way the communities we serve are affected – and because we’ve all lost over £1,000 in strike action so far, some posties’ Christmas trees will have far less presents than usual. But I don’t know what we could have done: Royal Mail’s CEO, Simon Thompson, couldn’t be bothered attending talks that my union hoped would have stopped these strikes. Even this week, when the union tried to offer a Christmas truce, they rejected the offer immediately.

But I doubt you’ll read that in most newspapers – the same papers who called us key worker heroes yesterday and now call us grinches, thieves and bullies today. It’s funny how time works, isn’t it? The truth is that none of my colleagues ever asked to be called heroes. When we dropped off essentials to vulnerable people, tried to cheer up the self-isolating and the elderly, that was all just part of the job to me; the job I’ve always done.

I’ve not changed, that’s still what I enjoy doing. This is what we are fighting for – I just want to do my job. We know our strengths, we know what we deserve, and we’re not going to be bullied and have our lives completely flipped upside down by people who don’t care about industry except to make a quick profit. All we ask for is a bit of dignity and respect on the job, and it’s something everyone in our country deserves: the right to decent work, self-respect on the job, and flexibility that is used to improve workers’ lives, not as a form of torture against them.

To me, this doesn’t sound like an outrageous demand from a company we made £758 million for – a company that could give £400 million to shareholders, six-figure bonuses to its CEO, and can boast of a £1.7 billion ‘war chest’ to attack our union. We posties don’t have the powerful friends of CEOs like Thompson, a man who ran the great success that was the Covid-19 track-and-trace system. All we can rely on is our unity, and vocal, proud support from you. So if you see your local postie out and about, please say hi, please wish them the best in their fight, and maybe even turn up on the picket lines at your local Royal Mail centre. It means the world to us, and it is this spirit of support – a true Christmas spirit of fraternity and support, I believe – that will put us on the path to victory.

Linkedin
OTHER ARTICLES
After building his reputation covering the US civil rights movement in the 1960s, the photographer went on to produce some of the most enduring images of the past century.
The action took place in response to the 200 asylum-seeking children who were placed in hotels run by the Home Office who have gone missing.
Photographer Becky Tyrell went down to the fading banger and stock raceway to meet a community desperate to keep it alive.
As she gears up for the release of her first book, the 24-year-old climate activist talks standing up to authority and building a more inclusive movement.
AI companies that develop image-generators using copyrighted artwork from the internet are coming under fire from artists who say that it amounts to theft.
Activists and campaigners are fighting back against new laws that would seriously undermine the ability to take industrial action, calling it an attack on fundamental workers' rights.