News & Politics / Boris Johnson leaves behind him a terrifying legacy 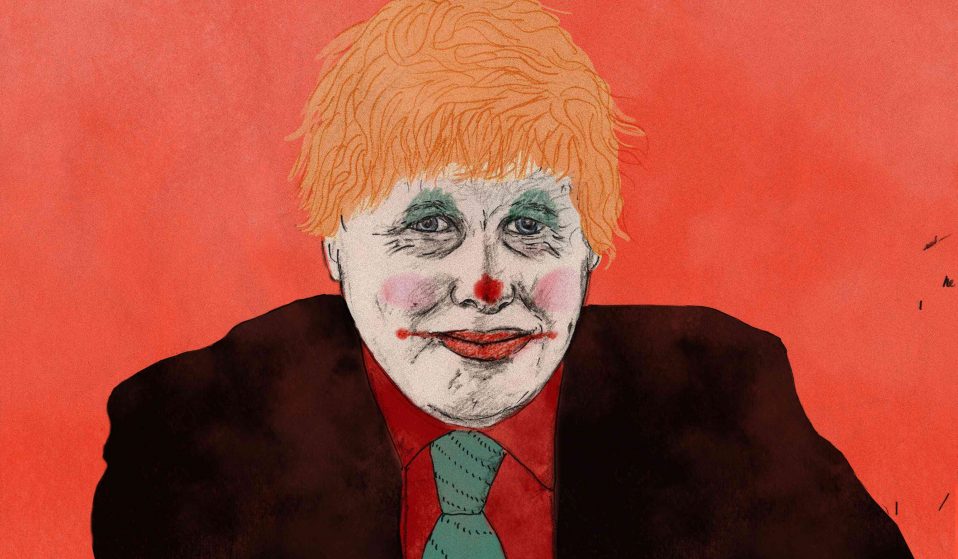 The prime minister may have resigned, but the impact of a raft of authoritarian legislation passed under his tenure is yet to be felt.

The prime minister may have resigned, but the impact of a raft of authoritarian legislation passed under his tenure is yet to be felt.

I don’t know if you’ve ever tried to fuck on pills but, for those of you unversed, let me break it down for you. You meet a guy in the club, you vibe, you get a cab, you go home, you furnish the floor with your clothes and you jump into bed with the promise of climax. As you climb on, you realise you’re in it for the long haul (thank you MDMA), and it’s hours of hard slog before you finally reach sweet release.

In much the same way, today, after months of build up, fervent anticipation and hectic, acrobatic manoeuvring, Boris Johnson finally resigned as leader of the Conservative Party and as prime minister.

The resignations were the culmination of months of scandal, including the financial misdemeanours of Owen Paterson, who Johnson subsequently backed; questions about the use of Tory party donor money to refurbish the No.10 flat; the Partygate scandal, and the sexual assault allegations around Chris Pincher – revelations it was later revealed that Johnson was aware of, at least in part, when appointing him to the position of deputy chief whip earlier this year.

There will be much written about Johnson: the wholly undignified manner of a political career marred by scandal, his half exit from power, and his legacy. There will be those who concentrate on his delivery of Brexit, his premiership through the coronavirus pandemic and his “thwarting of the threat of Corbynism”, as former Health Secretary Sajid Javid posited in his resignation letter earlier this week. Javid being one of 18 Conservatives who admitted in their resignation that the former Labour leader still lives rent free in their head.

What may be missed, however, is the way in which Johnson, and his government, have fundamentally reshaped the constitutional settlement within this country for the worse. The 2019 Conservative Party manifesto was a document that, quite rightly, prompted terror and concern from civil society and activists. As I wrote in autumn 2019 in the run up to the election, “this manifesto, and the proposed extension of the attacks we’ve already witnessed, should have us all afraid. Very, very afraid.”

Hyperbole and hysteria runs red in the veins of the political commentariat, so it’s easy to cast off dire warnings or analysis about legislative manoeuvres by a government. But we must be clear about the future we currently face. The sun may be setting on the Johnson premiership, but the impact of these years has barely begun. The tectonic reshaping of the landscape of our rights and powers into an as yet untested theatre of war presents a new, terrifying threat.

The thumping mandate that Johnson won in that election gave him carte blanche to implement much of the worst elements of that manifesto. The Policing Act, Elections Act, and Judicial Review Act are all the culmination of years of attacks on our rights by the Conservative Party.

Despite valiant attempts to thwart them, each of these pieces of legislation represent a tightening of our current rights. They make it more difficult to pull the levers of power in the direction of progress and shield the government from obligations – moral, legal or other. Their passage through parliament, in the face of sustained opposition, also mark a fundamental reframing of our constitution. The constitution sets out, amongst other things, the specific rights and powers we enjoy within a legal framework.

The attacks on these rights and powers cannot be understated. We are yet to truly see the impact of many of these pieces of legislation. The provisions included within them significantly undermine our right to protest, actively threaten the lives of GRT people and reshape how we interact with the amorphous state. The coming weeks, months and years will see these begin to bite.

Even with him gone, there’s still more Johnsonian assaults on our rights to come. Johnson’s public order bill, which contains even more protest busting provisions, is steadily making it’s way through Parliament, while there seems to be no sign that his new Bill of Rights – masterminded by his loyal deputy prime minister Dominic Raab – will be scuppered by the latest chicanery in the streets of Whitehall. The latter bill presents within it the most explicit renegotiation of our rights settlement yet – scrapping the Human Rights Act, blocking migrants and criminals from being able to enjoy rights under the European Convention on Human Rights and removing obligations for public bodies to implement those rights.

In 2019, I ended the aforementioned article by saying, “be afraid. Be very, very afraid”. Now we don’t have the luxury of fear. Instead, we must be ready to fight, with everything we have, to finally throw off the shadow of Johnson and the Conservative Party.

Linkedin
RELATED ARTICLES
OTHER ARTICLES
As the Criminal Bar Association enters its fifth week of action, criminal barrister Russel Fraser explains why the legal professionals have walked out and how action is likely to escalate.
One year on from the fall of Afghanistan to the Taliban, Tiara Ataii speaks to those who have been forced to make the treacherous journey to Europe for safety, and the barriers and horrors they have faced.
Following the release of his latest album, the rapper talks about finding a new approach to songwriting, attitudes to poverty, and why his music is more than a political statement.
Photojournalist Fiora Garenzi spoke with people still living in Eastern Ukraine, an area which seen some of the heaviest fighting since the war began.
With the UK now set to run out of vaccines, people working in the sex industry – particularly outside of major cities – have been left especially vulnerable, reports Brit Dawson.
To mark the premiere of his new documentary on surfing giant Gerry Lopez, the filmmaker and former pro skateboarder sits down to share his unique brand of wisdom.